Posted at 08:52h in LETTERS AND DOCUMENTS

Paris: Galerie Tournesol, 1965
21 x 13.5cm, 2pp hand typed letter from Boltanski on Galerie du Tournesol letterhead paper to M. Berg explaining that the painting purchased by Berg has been sent to him and details on payment. Boltanski also says how much he is looking forward to meeting Berg in the new year. 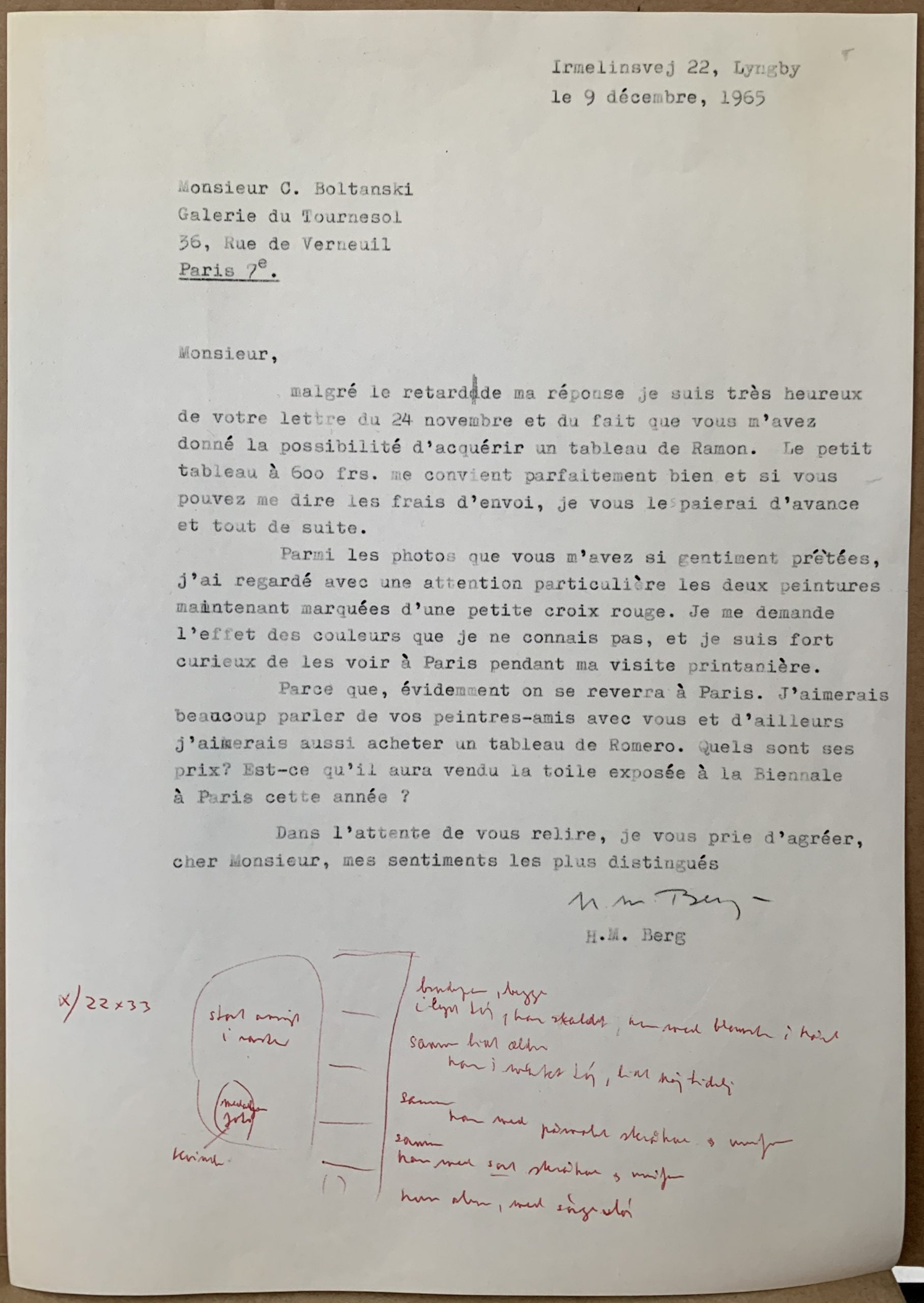 Posted at 15:42h in LETTERS AND DOCUMENTS

Copenhague: Berg, 9 Decembre 1965
30 x 21cm, 2pp. Original carbon copy of a typed and signed letter from M Berg indicating he was interested in acquiring one of the paintings by Ramon however the images sent by Boltanski do not show the colours. He also notes he is coming to Paris and will meet Boltanski and look at works in person including a painting by Romero.
This letter has some notes in red ink.

Dusseldorf: Galerie Schmela, 1965
15 x 21cm, 4pp announcement card with a b/w image of Beuys pretending to be asleep on a lump of fat. This was the artist's first exhibition/performance in a private gallery and where he explained art to a "dead hare" by showing all of the 38 works (all listed here) to the corpse while miming the dead animal's movements. This is a VG+ example of a scarce early invite card.

Posted at 18:49h in LETTERS AND DOCUMENTS

Paris: Galerie Tournesol, 1965
21 x 13.5cm, 2pp hand typed letter from Boltanski on Galerie du Tournesol letterhead paper to M. Berg replying to the latter's letter of 19 Nov 1965, discussing a painting that Berg was interested in buying. Boltanski claims in "the Possible Life of Christian Boltanski" that his father told his mother they had better open a gallery together to allow their son to learn how to be an artist. The Gallery sold only Jiddish art but clearly Boltanski's interest in the avant garde made the chosen artists a little more radical. The motivation for starting the gallery is probably not true (like many of Boltanski's tales it is more than likely deliberately false) but he ran the venture from 1965 until 1968.
... 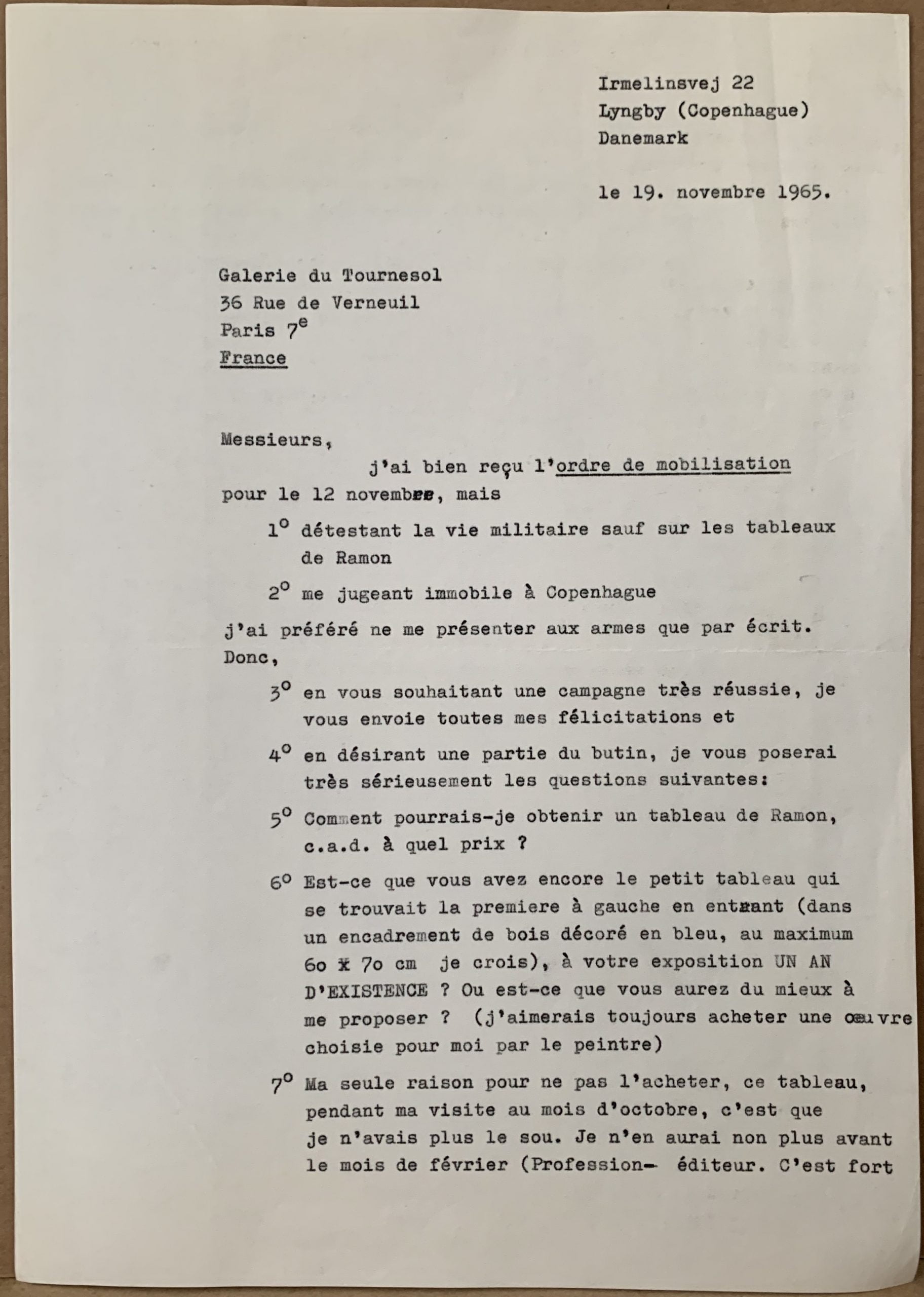 Posted at 15:34h in LETTERS AND DOCUMENTS

Copenhague:Berg, 19 Novembre 1965
21 x 14.8cm, 4pp (but only one side is utilised). Original carbon copy of a typed and signed letter from M Berg noting he received the Ramon painting and that he has sent a cheque for 600fr. He asks for some photographs of works by Ramero before his visit to Paris. 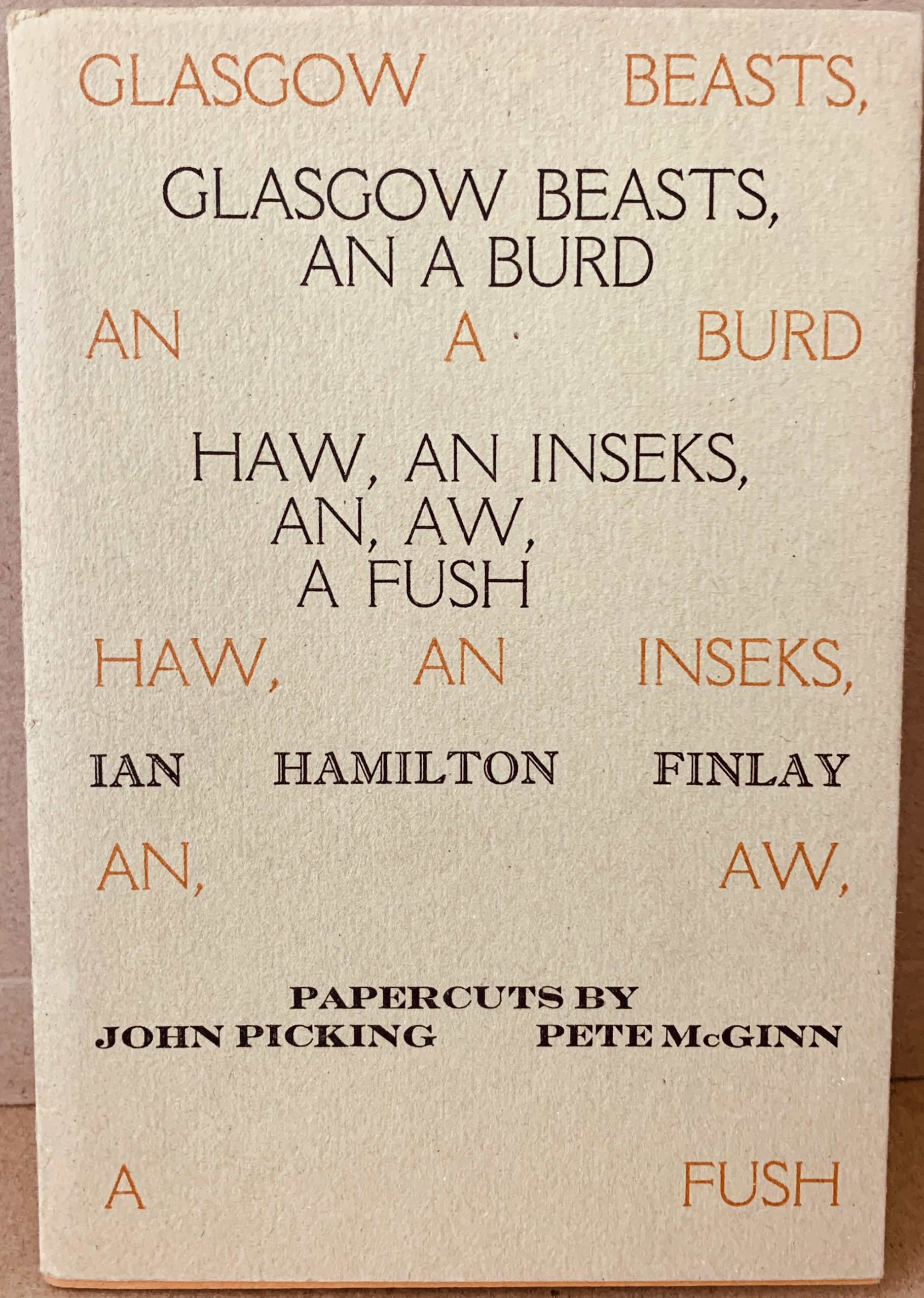 n.p. : The Wild Flounder Press, 1962
11.7 x 17cm, 32pp. Card wrappers with blue on brown typographic design dust jacket. Finlay's third book of poems - as with other early Finlay poetry the language is Scots with touches of Doric. The poems all relate to animals and other creatures ("inseks" and a "fush") and there are papercuts by John Picking and Pete McGinn. This is the fifth edition of this book and the orientation and design of the dust jacket has been changed. There is a hand written ink dedication on the half title "For Paul (Robertson) Pette McGinn / 05". VG+ condition.

Posted at 19:28h in Artist's Postcards

Edinburgh: Wild Hawthorn Press, 1965
22.8 x 11.3cm, 4pp. Inner pages are black, text is only on front and back of card.
The text is printed blue on the front of the card and yellow on the back. The text is as follows:

how blue!
how far!
how sad!
how small!
how white!

and the back is the same only the ! is replaced by a question mark.
The front of the card is an exclamation about the experience of looking at things - the sky is blue, it is far away, it seems sad (blue) and yet small and white (clouds). The back by a simple change of punctuation indicates doubt.
The title of the card references the Russian artist Kasimir Malevich and the name he gave to the abstract art he developed from 1913 characterised by basic geometric forms and colours. The world is a simple place it seems to say.
This is the last of Finlay's earliest Standing Poems - he turned to publishing more standard formats of postcards for a while but returned later with D1 and the 4 sails works to the format.

Paris: Ramon Gallery du Tournesol, 1965 21 x 13.4cm, outer folder with stapled in 4pp title page and a 6pp fold out "Ordre de Mobilisation" designed by the artist. Exhibition catalogue at the gallery where Boltanski was the co-ordinator/curator. The back of the booklet reproduces a silkscreen portrait in white of the artist's grandfather when he was in the military and the front a letter from his to his wife dated 26 December 1914.
VG+. Very scarce. 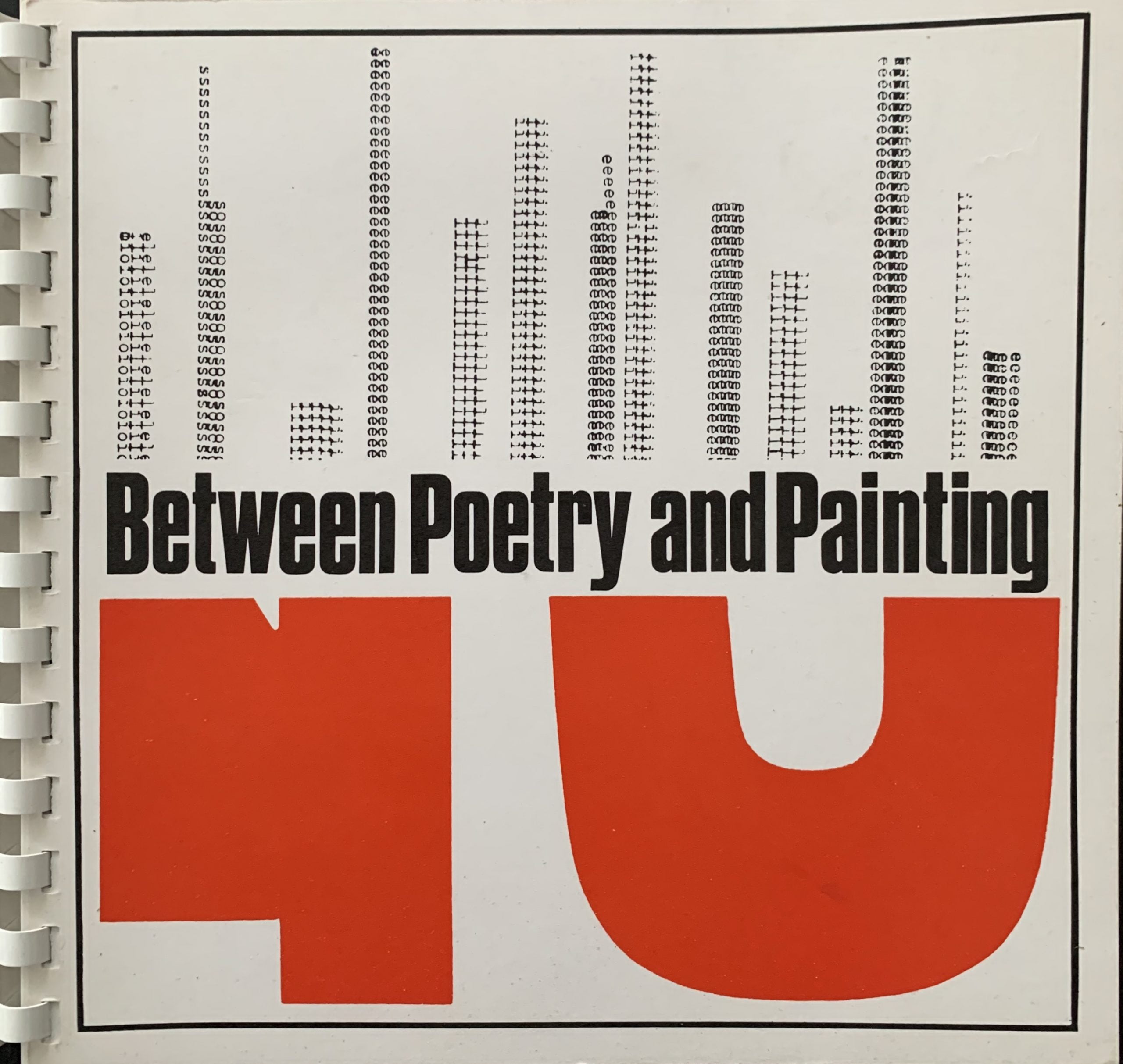 Posted at 20:02h in Exhibition Catalogues

London: Institute of Contemporary Arts, 1965
20.5 x 21cm, 82pp plus card covers. Spiral bound. An anthology of experimental and concrete poetry which was published as the exhibition catalogue for a show at the ICA of the same title. Curated by Jasia Reichardt - who also wrote the long text - this was a breakthrough exhibition which brought works by Ian Hamilton Finlay, Jiri Kolar, Hansjorg Mayer, Pedro Xisto, Ladislav Novak, Dieter Rot, and numerous others to the attention of the British public.
Finlay like the others has a short biography and then Reichardt lists a number of works and publications up to 1965. EarthShip (the rare paper sculpture) is reproduced in b/w and a letter from Finlay to Pierre Garnier from 1963 is also printed which could be regarded as the former poet's credo. Similar texts for the other artists. VG+. 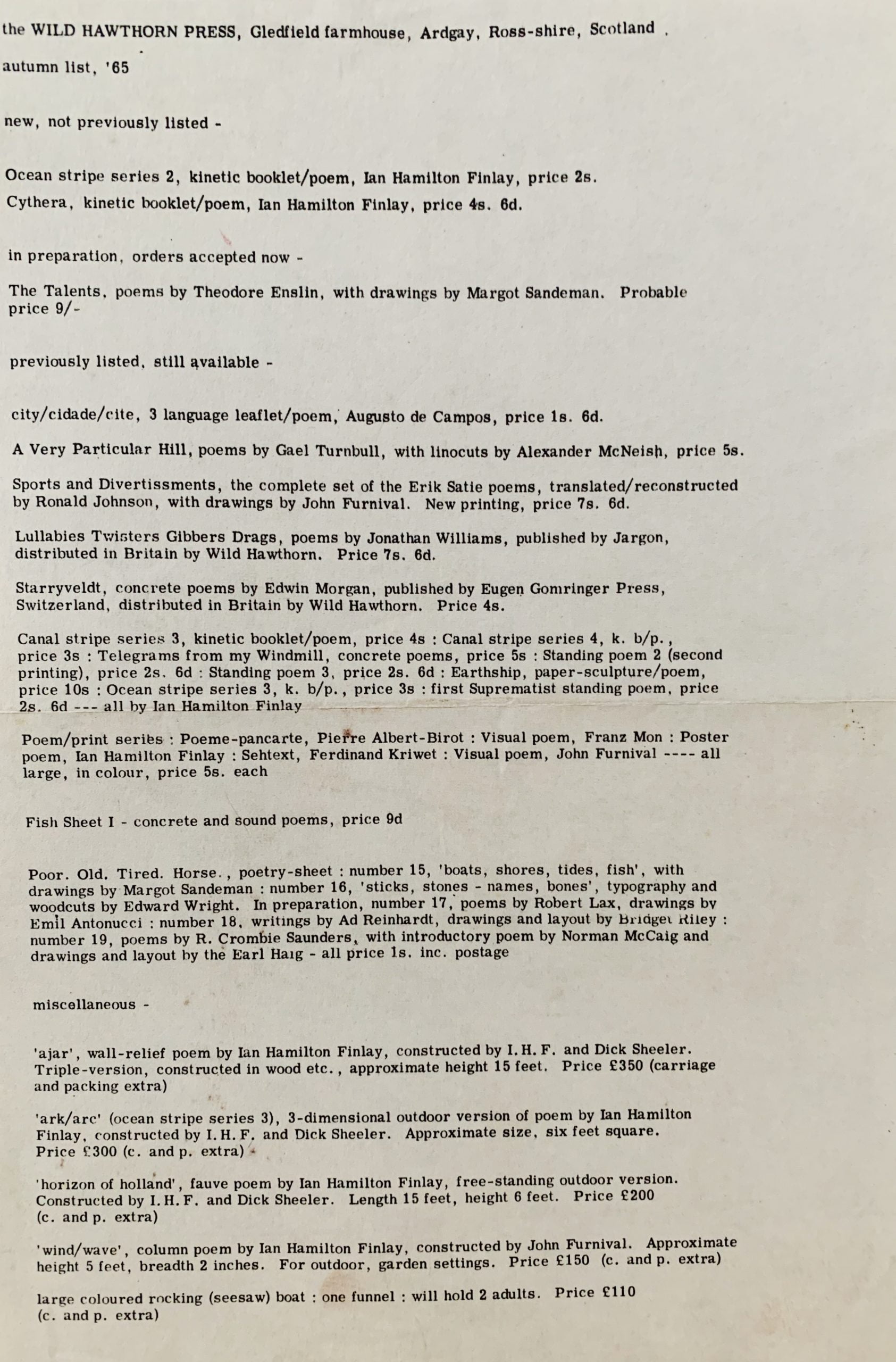 Posted at 21:23h in Miscellany 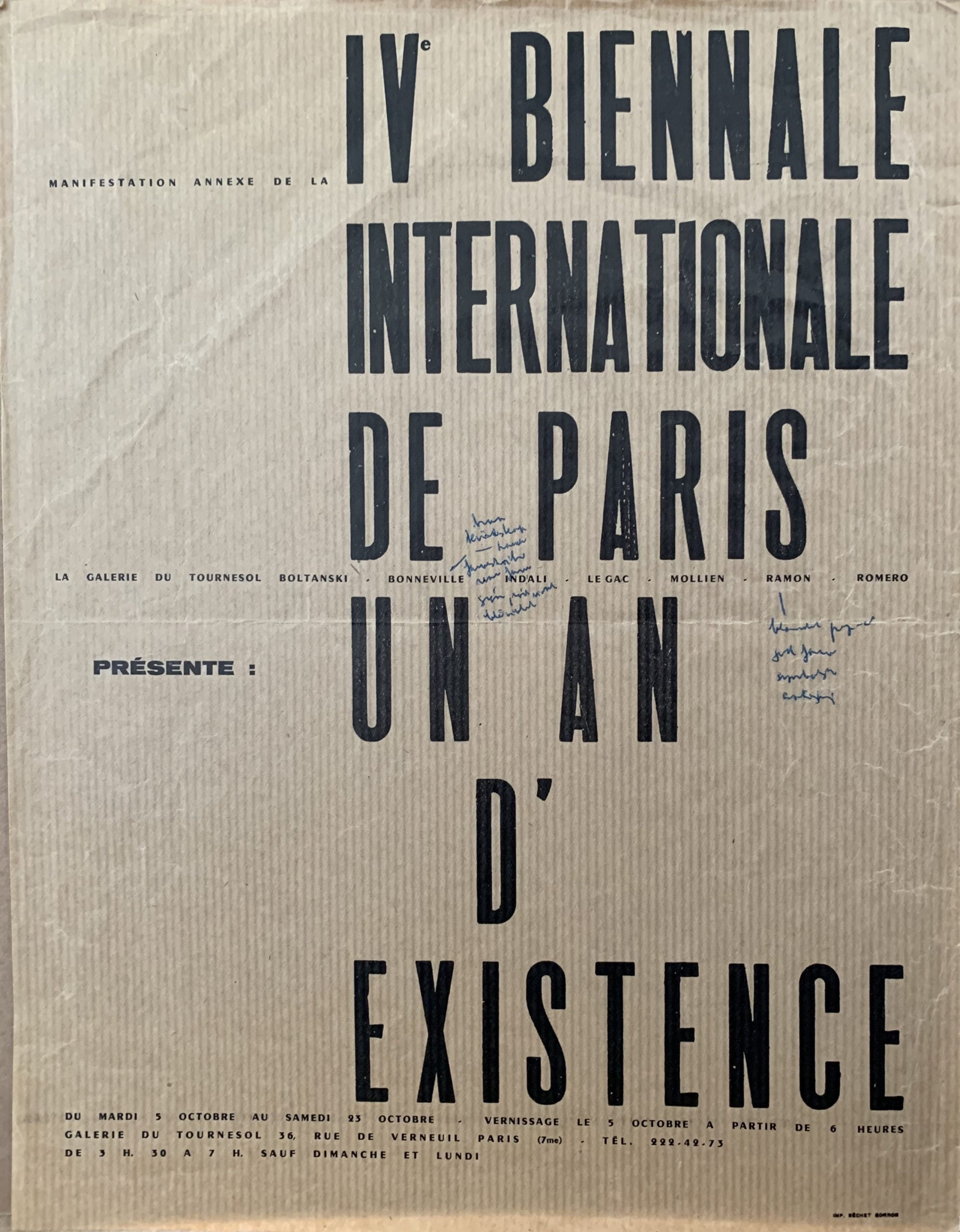 Paris: IV Biennale Internationale de Paris, n.d. (1965)
30.5 x 23.5cm, 1pp printed black on brown manilla paper. The small typographic poster for the Galerie du Tournesol's "annexe" for the Festival with Boltanski, Bonnevill, Indali, Le Gac, Mollien, Ramon and Romero noted as being included. The poster has blue ink handwritten annotations by Boltanksi relating to Benneville and Ramon but these are very hard to read. One of the very first documents that show Boltanski as an artist not just the director of the gallery.
In The Possible Life of Christian Boltanski" 2007, Boltanski claims his first ever public artistic endeavour was the showing of a film "The Impossible Life of Christian Boltanski" at the Ranelagh Cinema jn May 1968 (coincidentally the month and year of the student -worker revolts in Paris) but this poster suggests otherwise with Boltanski's name as one of the artists exhibiting at the Galerie du Tournesol. What was shown is not known but it is unlikely that Boltanski included his own name without showing something.
Extremely rare documentation in VG+ annotated condition.

Edinburgh: Wild Hawthorn Press, 1965
31 x 21 x 18cm., printed shoebox content of a paper sculpture made up from 19 printed cards that are stapled together in such a way that the shape can be varied to create "various permutations of the poem depending on arrangement of the organic curved shapes". The work is most probably meant to be placed to resemble a ship at sea. The words all relate to the earth and elements.
This is by far one of the most rare of Finlay object multiples - it is estimated that fewer than 50 were made. The staples after 60 years are very minorly rusted and the outer box lid has one tear along the fold but else this is in remarkable shape.