Edinburgh: Wild Hawthorn Press, 1965
31 x 21 x 18cm., printed shoebox content of a paper sculpture made up from 19 printed cards that are stapled together in such a way that the shape can be varied to create "various permutations of the poem depending on arrangement of the organic curved shapes". The work is most probably meant to be placed to resemble a ship at sea. The words all relate to the earth and elements.
This is by far one of the most rare of Finlay object multiples - it is estimated that fewer than 50 were made. The staples after 60 years are very minorly rusted and the outer box lid has one tear along the fold but else this is in remarkable shape. 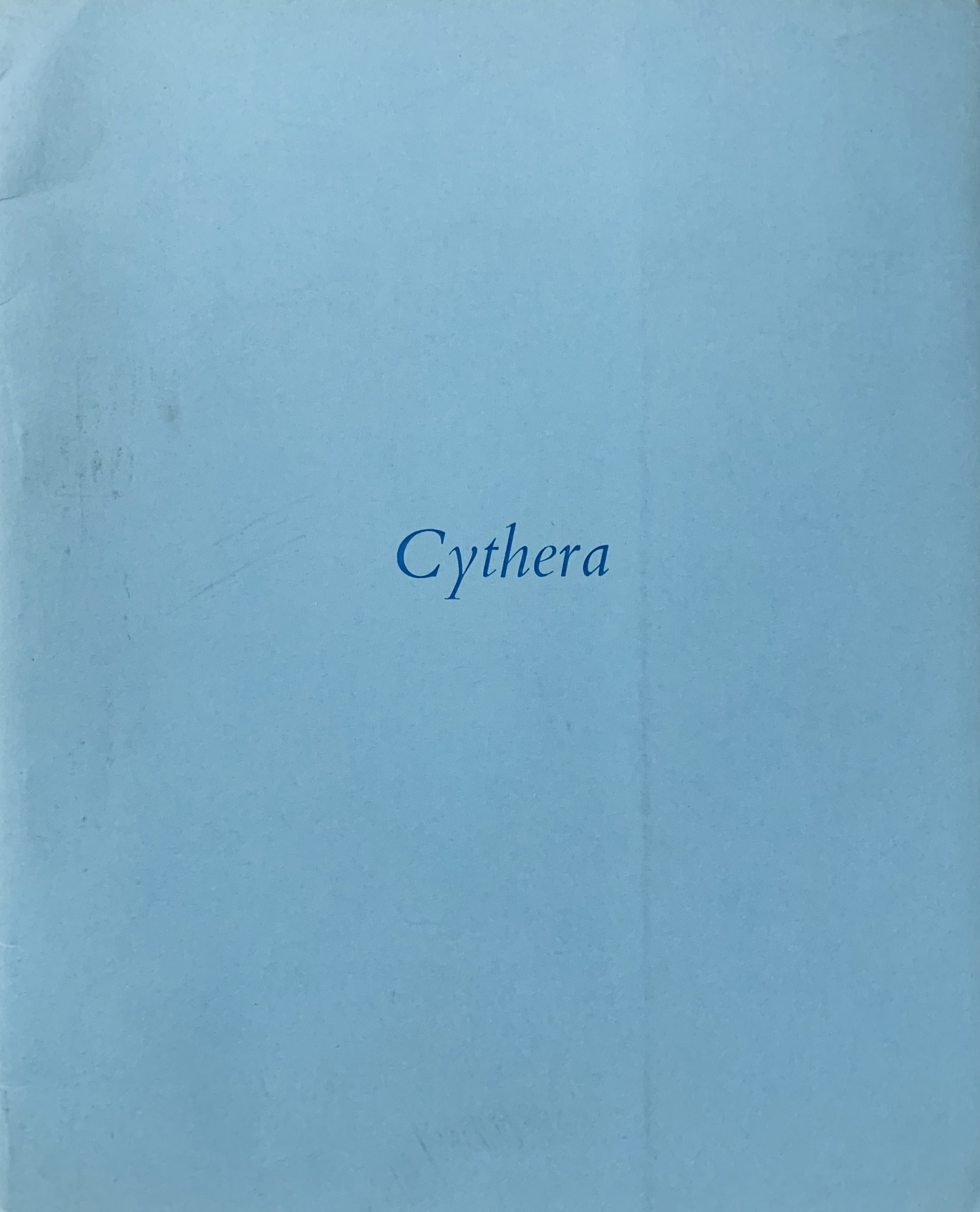 Edinburgh: Wild Hawthorn Press, 1965
5.5 x 20.6cm, 28pp. Original wrappers and typographic blue dustjacket. The inner pages have single words or short phrases printed in an italic font. The text in page order is: "air/ in blue/ leaf/ blue bark/and blue leaf/ a leaf/ a barque/a blue leaf/ a barque in leaf-blue/aire" The book title Cythera is from the title of the painting - The Embarkation for Cythera ("L'Embarquement pour Cythère") by Jean-Antoine Watteau. The painting is usually regarded as highly romantic (in a love sense rather than the movement) and the couples represented by Watteau are heading to board a boat to go to the mythical idyll.
When one reads Finlay's text the sense is of romance, beauty and of the joy of being at one with nature. The text also reflects the idea of a journey and, finally, the punning of bark/barque and air/aire brings a musical aspect to the poem which might also be inferred in the painting from the stylings of the putti dancing in the air. One of Finlay's most beautiful books.
This example has a handwritten dedication by Finlay to a "Janie R" in blue ink and is dated 1965.

Posted at 18:42h in Artist's Postcards

Edinburgh: Wild Hawthorn Press, n.d. (1965)
22.8 x 11.3cm, printed 1pp. Folded on both sides allowing the card to stand as intended. Printed olive green and blue on white.
JOINT WITH AS ISSUED:
13 x 11.4cm, 1pp diagrammatic card with a key to the various hearts in the standing card.

This (officially the third Standing Poem) is related to the earlier Standing Poems in various ways - firstly that the sides of the sheet bend in to allow the work to stand up, secondly a repeating pattern of shapes (roughly formed hearts) are printed in a lattice pattern over the sheet.
The Standing Poem 2 versions both have hearts as one of their motifs. It is almost as each card in turn was an evolution from the previous one (which is a reasonable argument and reflects the fact that the earlier cards had images on them that "evolved" within the card).
The colours used here differ though - olive green and blue on white is attractive but doesn't tend to evoke any particular meaning.
The separate key card that Finlay added to the paper sculpture indicates the hearts are all different and have titles - they are Little Heart, Wooden Heart, Pond Heart, Owl Heart, Jersey Heart, Umbrella Heart, Bobbin Heart and End Heart. It is hard to see any reason why these names are chosen. Other than the lazy distribution of the hearts (again somewhat loosely reflecting a constellation) it seems nothing more than a love poem of sorts. But a little thought reminds one that there are physical elements of the prefixed objects that look heart like - an owl's forehead, the point of the unfurled umbrella, a neckline from a Jersey and so on. Finlay loves a visual pun or simile and here it is if obscured.
This is a scarce card - Murray in his flawed catalogue raisonne claims it as the fourth ever card published but it is more accurately the sixth if one includes the earlier typescript from 1963 in this collection. VG+ condition.