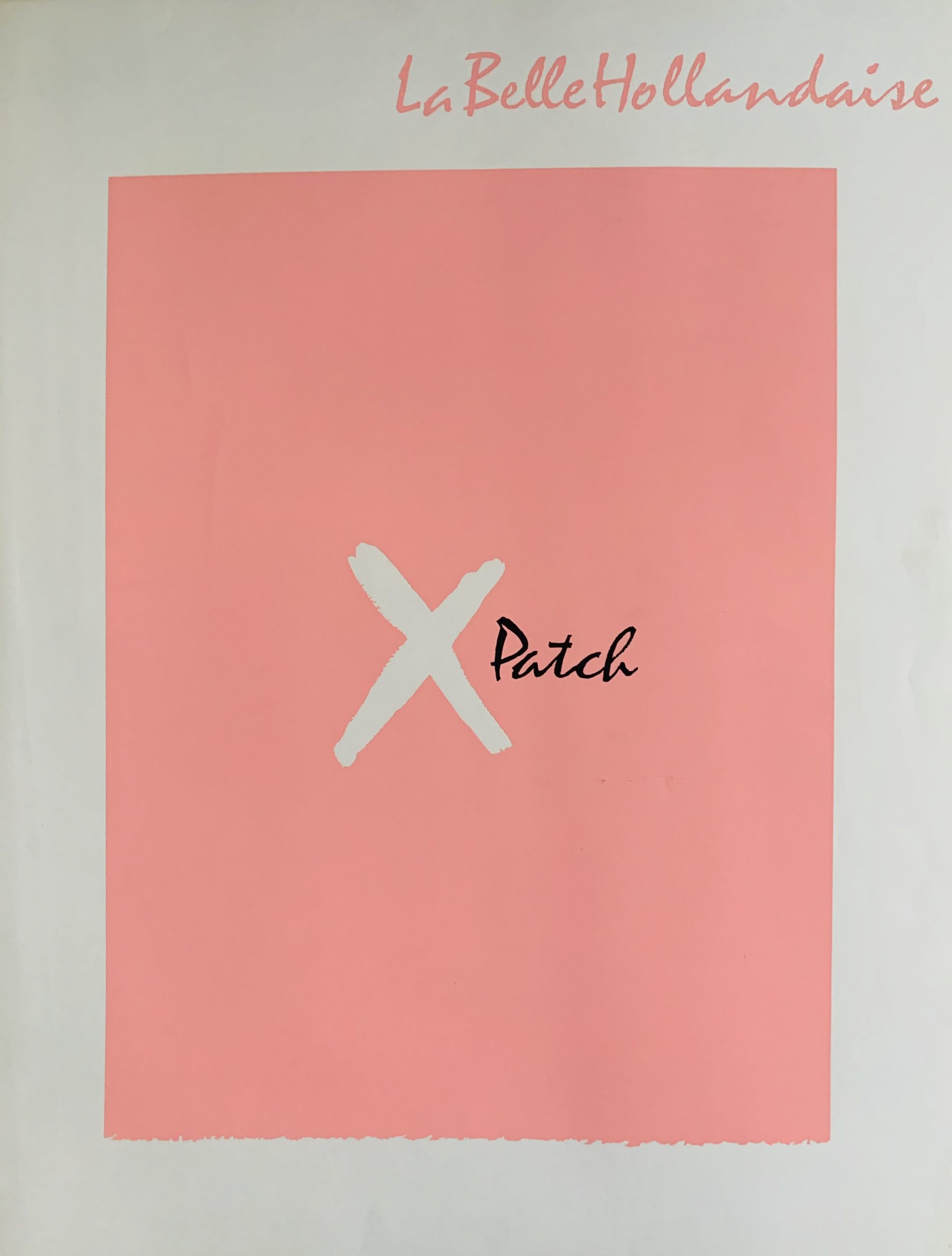 Dunsyre: Wild Hawthorn Press, 1967
58 x 43cm, pink and black silkscreen. Concrete poem - one of the earliest Finlay prints. The work is one of a number where Finlay is fascinated by the patches to be found on sails (of both boats and windmills) and also references in its title Picasso's early career portrait of a strapping naked young Dutch woman. The image suggests that one should read the symbol and the word as "Crosspatch" - which is someone easily made upset which strangely one would not take from the semi-smiling woman in the Picasso portrait. But then an unmended sail of either a windmill or a boat would cause the sails to misbehave.
The design was created from Finlay's instructions by Herbert Rosenthal. Murray 5.10 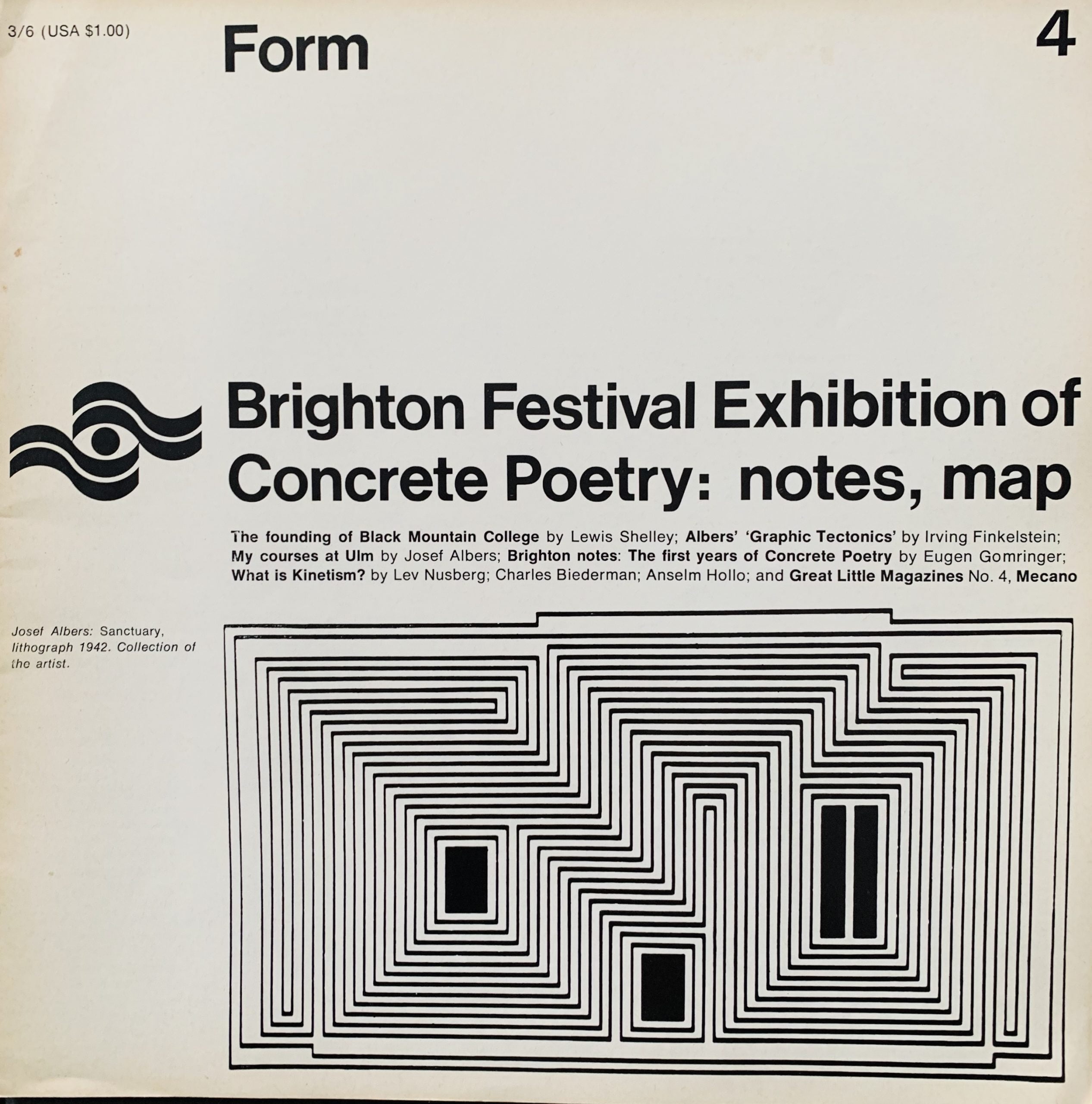 Cambridge: Form Magazine, 1967 24 x 24cm, 32pp plus typographic wrappers. This single number from series of magazines edited by Philip Steadman, Mike Weaver and Stephen Bann - here the fourth number which contains a notes, map and a detailed review of the Brighton Concrete Poetry Exhibition to which Finlay showed two major sculptural works - Sailors' cross and Purse-Net Poem. The former was c. 1.2m high and the latter 2.4 x 1m in side - both collaboraitons with Henry Clyne.
Otherwise there are articles on the Black Mountain College, Albers 'Graphic Tectonics', 'What is Kentetism' ?, two essays by Charles Biederman, poems by Anselm Hollo. a review of Mecano magazine.
This is more of a review of Finlay's contribution to the event rather than actual works included by Finlay but we have decided to place this in the Pageworks & Contributions section of this site because of Finlay's earlier contributions to the same magazine which was after all edited by his friend and often essayist Bann who had curated much of the Brighton show. VG+ example. 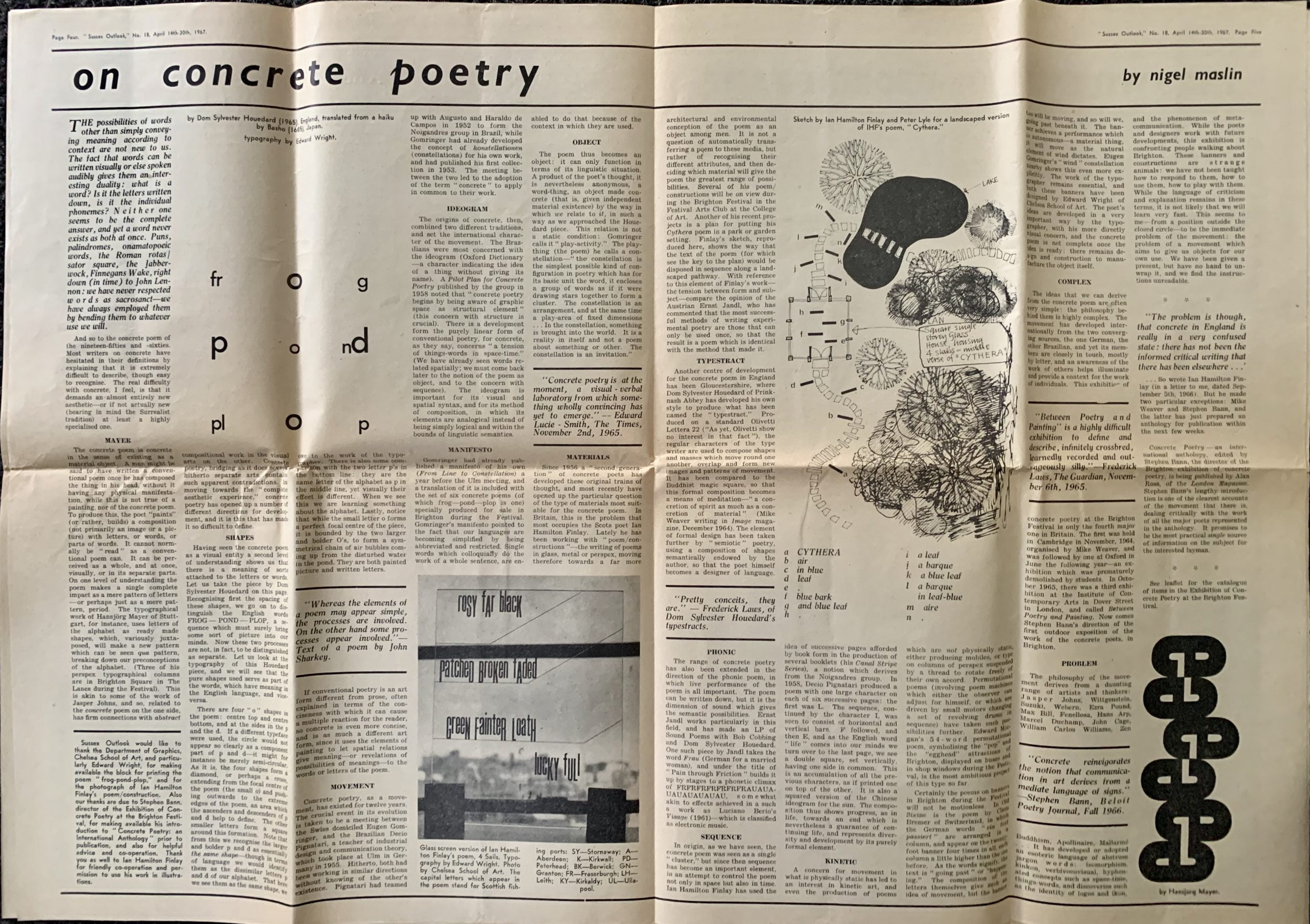 Posted at 09:04h in Miscellany

Brighton: Sussex Outlook, 1967
44 x 32cm, 12pp(self cover) - a tabloid newspaper published by students at the University of Sussex, which was a special issue considering the events at the Brighton festival including the double page feature on the concrete poetry exhibition that Finlay figured so prominently in. Two works are repriuced black on white (Cythera and roSY fAr blacK and a lengthy and informed text by Nigel Maslin who quotes Finlay and Bann amongst others. Rare. VG+ although browned a bit over fifty years.