Dunsyre: Wild Hawthorn Press, 1968 45.9 × 52cm, yellow and black on white silkscreen. A collaboration with the well known British pop artist Caulfield in the latter's bold, thick out-llined style. Four lemons are in a bowl, and the word MARINE is next to the bowl seemingly on a piece of wood or card (possibly a fisherman's slip used to identify who owned what fish boxes when the catch went to market).
In a number of different works, Finlay often compares lemons to boats - so this is on one level a scene of a harbour: the lemons are made even more obviously to represent boats as they each has port registration numbers on them.,
The edition size is not known. All copies of the print are unsigned (which was Finlay's preference but a little unusual for the pop artist). There are some scuffs on the black of this silkscreen but else VG. This is a very rare print - partly for the later popularity of Caulfield.
JOINT:
15 x 21cm, 1pp. Printed compliments slip "Marine: Ian Hamilton Finlay:drawn by Patrick Caulfield" and with added hand written note: "Love from Ian, 4 January 1969". Perhaps might be regarded in lieu of a signature.
BR> MEDIUM Screenprint on paper DIMENSIONS Image: ... 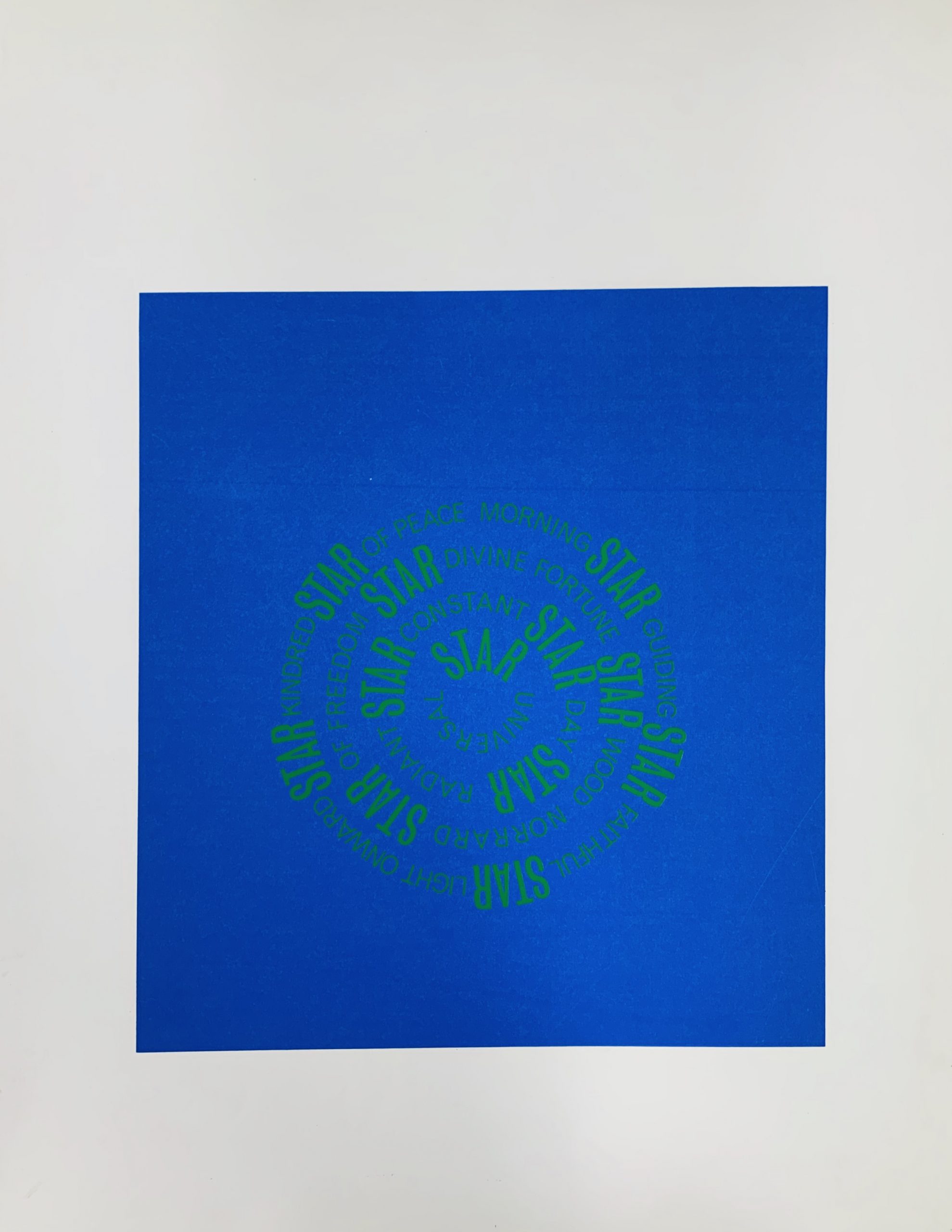 Dunsyre: Wild Hawthorn Press, 1968
56 x 43cm, 2pp. Green on blue on white paper - a circular design made up of fishing boat names typographically set by Alistair Cant on Finlay's instruction. The pattern creates both a planet or the movement in the stars as they appear to spin around the boat as night passes. Stars for boats are essential to allow passage - until modern methods of navigation they were the sailor's only orientation. The choice of the boat names chosen by Finlay reinforces that - all have the word STAR in them e.g. Morning Star, Day Star, Fortune Star and so on.
This is the second of two large prints with a similar intent - Sea Poppy 1 being in 1966 - the other uses the letters and numbers of the boats - here the attractive names people give their vessels are used instead.
The title Sea Poppy refers to the yellow hornpoppy which only grows on sea shores - again a clear nautical reference.
This design and others like it was used by Finlay in different formats including wall works, object multiples, printed posters and cards - but this printed version uses colours that are hard to see against each other - given the text is more readable in the other formats of this work it is tempting to suggest that the colour clash here was a mistake although some psychedelic designs of the late 60s did deliberately set up such colour clashes.

Koln: Art Intermedia, 1969
14.5 x 21cm, 4pp gatefold card. Announcement for a solo show of early works (drawings and sculptures) by Beuys from the period 1947 to 1957. A text on Beuys by Per Kirkeby is found on the back of the card. Slight brown marks (nascent foxing perhaps) on the front of the card else VG+.
JOINT:
Koln: Art Intermedia, 1969
16 x 22.5cm, printed mailing envelope with a text from the gallery on the front and on the back "details" of the various events in the gallery for December 1968 (really a newsletter. Some wear from the mailing process and a hand addressed example.