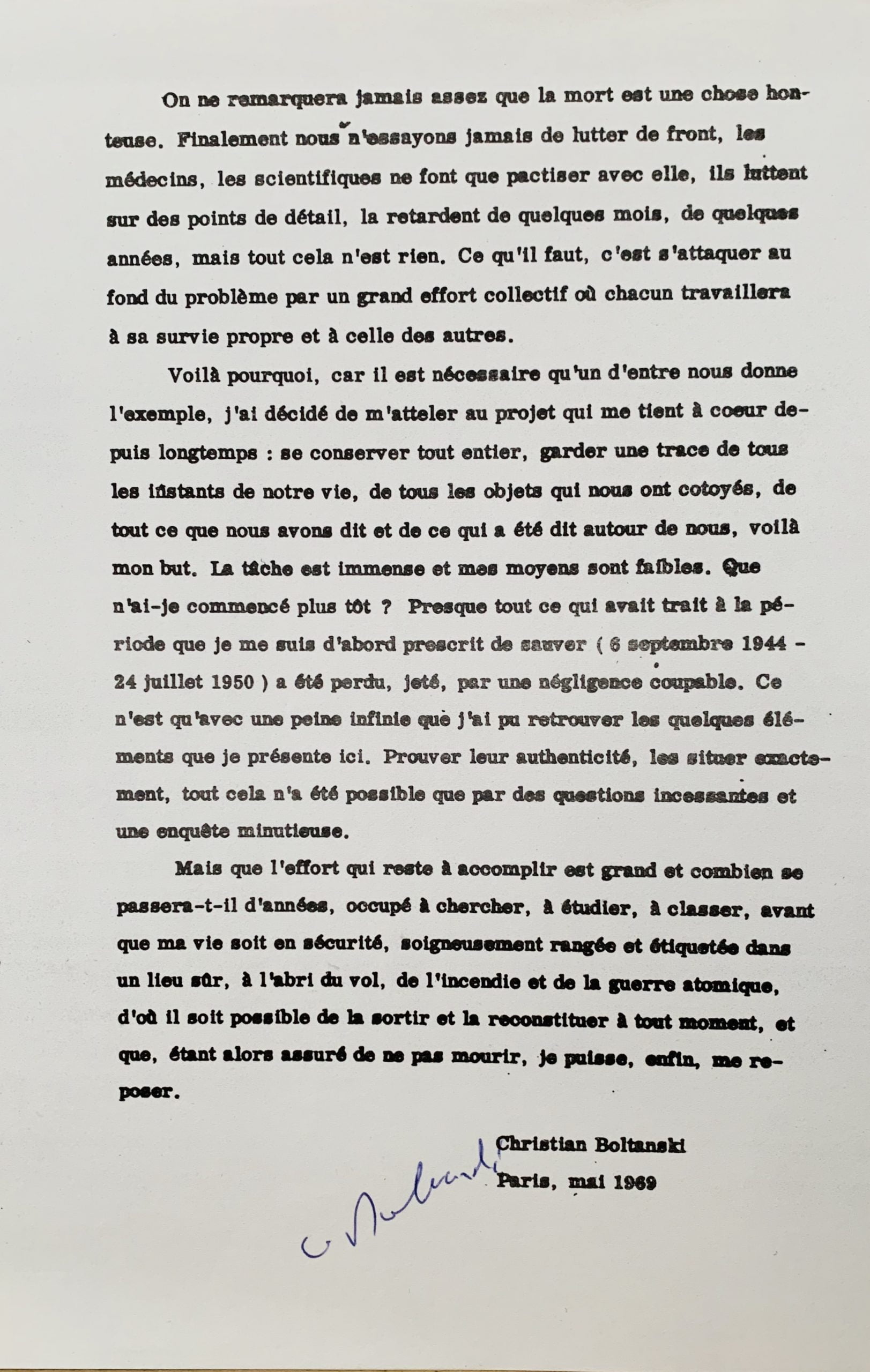 Paris: s.p. (Boltanski), mai 1969)
36 x 27cm, 1pp. The insert placed in most copies of the artist's second artist's book (but the first entirely written and designed by him) which is extremely rare. The letter is a credo of sorts and explains much of the artist's later interests and commitment of archiving the world around him.

"It cannot be emphasised enough that death is a disgraceful thing. In the end, we never try to fight head-on, the doctors and scientists only come to terms with it, they fight on points of detail, delay it for a few months, or a few years, but all this is nothing. What is needed is to tackle the root of the problem through a great collective effort in which everyone will work for their own survival and that of others.
This is why, it is necessary for one of us to set an example, I decided to tackle the project that has been close to my heart for a long time: to keep everything, keep track at all times of our life, of all the objects that have surrounded us, of all that we have said and of what has been said around us, that is my goal. The task is immense and my means are poor. Why did I not start earlier? Almost everything to do with the period I decided to save (September 6, 1944 - July 24, 1950) has been lost, thrown away, through culpable negligence. It was only with infinite effort (pain) that I was able to find the few elements that I present here. Proving their authenticity, locating them, all this was only possible by incessant questions and careful investigation.
But how great is the effort that remains to be accomplished and how many years will pass, occupied in seeking, in studying, in classifying, before I am safe, carefully stored and labeled in a safe place, safe from theft, from fire and from atomic warfare, so it is possible to take it out and reconstitute it at any time, and that, being then assured of not dying, I can, finally, rest.

The book which Boltanski placed this text in supposedly showed evidence of his childhood - but much of the contents were fiction. The point, of course, being that no matter how hard onew might try to recreate the past is doomed to failure and is full of lies (whether meant or not).
This letter was signed in blue ink by Boltanski in December 2017 when Paul Robertson visited him in his Paris studio. It is one of the most important texts by the author. In near mint condition.

It is referenced in Flay Christian Boltanski Catalogue 1992, Page 8.