26 Mar EVENING WILL COME THEY WILL SEW THE BLUE SAIL. 1970. FIRST EDITION.

Little Sparta: Wild Hawthorn Press, 1970
70 x 82cm, full colour offset lithograph with the title text.
The following comes from an unpublished book by Paul Robertson who created this collection:
"I want to give another example of a work that requires background knowledge to be well understood. It is a work by Ian Hamilton Finlay - a Scottish artist who once told me that he was not really an artist but rather a poet. Indeed Finlay was originally universally identified as a poet creating early books from 1958 onwards which contained poems which would be easily be recognised as following traditional structures albeit written in lowland Scots but by 1963 Finlay was beginning to experiment with concrete or visual poetry forms - the placing of the words on the page having meaning as much as the syntax or choice of the words. Around the same time Finlay (who had always made wooden toys and small boats) began to use his poems as the starting point for sculptural works, prints and unique installations directly in the landscape. In 1966 Finlay, along with his then wife Susan, purchased a former farm and a thirty plus year project to sculpt the land into a major artistic garden (or perhaps better thought of as a multi-acre sculpture) was begun.
I first visited Little Sparta (the name Finlay eventually gave to the gardens after initially retaining the farm name of Stoneypath) in the 1990s and Finlay was there wearing an old Glasgow Rangers jacket and drinking tea out of a large mug. He was a little reticent to talk art - but I was a collector of the artist-poet's works so I pushed him a little. I had found a wooden carving in a grassy area behind his cottage and recognised it by the text found beneath a relief of a ship. The text said “Evening will come. They will sew the blue sail.” I recognised that text from one of Finlay’s best known prints - an entirely typographic work printed white on blue in a long vertical rectangle. The white text is printed so that no word is longer than four letters (by the use of hyphenation) and each line is offset from each other such that as one reads down the artwork the text seems to zig-zag.
I realised the wooden sculpture I had found was the first ever artwork by Finlay utilising that text and as such was an important historical source for the work which was later recreated in different formats. The wood was rotting and I suggested to Finlay that he should really bring the sculpture back into the house (or put it in the mini-art gallery Finlay had created which he referred to in his classicist manner as The Temple). Finlay did not skip a beat and simply said to me: “No. Let it return to the earth.”
That acceptance of decay and the inescapable fact that everything will ultimately return to earth was more than just a lazy retort to my concern for the future understanding of Finlay’s work. it was entirely appropriate for a work which at its very core is a momento mori: a classical reminder of man’s limited lifespan on this earth. The entire work is imbued with the same meaning as Yoko Ono’s brief staring into a burning match in the dark.
The print version of “Evening will come. They will sew the blue sail.” is a remarkable work and one which has multiple and deep meanings.
Finlay was always fascinated by the Scottish fishing communities. It can be surmised from his work that he saw a simpler, smaller mostly rural community as some purer way of living although this complex intellectual also defined other characteristics and motifs from that sea-centric way of life. When one considers the bald text of “Evening will come. They will sew the blue sail.” the first meaning of the work is a simple description of how at night after the boats had returned, the sails were repaired by the community. That is straight-forward and a tad romantic - suggesting an almost idyllic honouring of decent honest labour.
There are other meanings to the text however - the first is a metaphor for the cycle of day and night - the blue sky here is the sail and at the end of the night is disappeared, presumably to be ‘repaired’ to return the next day as perfectly as twenty-four hours before.
The third meaning is about the return of the boats to harbour and one has to look to another of Finlay’s works to see the clue that reveals this meaning. “The Little Seamstress” is another print which Finlay made in conjunction with Richard Demarco (one of the poets earliest collaborators, Finlay usually worked with skilled artisans and other artists to create his works - the poetic concept being more important to Finlay than artisan activity on his on behalf). “The Little Seamstress” (1970) was created in the same year as “Evening will come.” and shows a fishing boat returning to port, as was typical, using its on-board engine to propel itself homeward. The title of the print can be read as a name of the fishing boat itself but the secondary meaning can be seen as the white flecks of waves created on the blue sea behind the boat look like white cotton on a blue cloth. This is the reference in “Evening will come.” - the boat returning home and the "put put" of white foam on the blue sea.
That last meaning is also reflected in the typography and the placing of the white words (and parts of hyphenated words) on a blue background - but more than just the beauty of the particular part-italic font employed on a strong blue colour is the subtle off-setting of each line where the zig-zagging of the words is a reminder of the way no boat tends to sail in a straight line - it is a direct visual representation of the tacking of a sail... 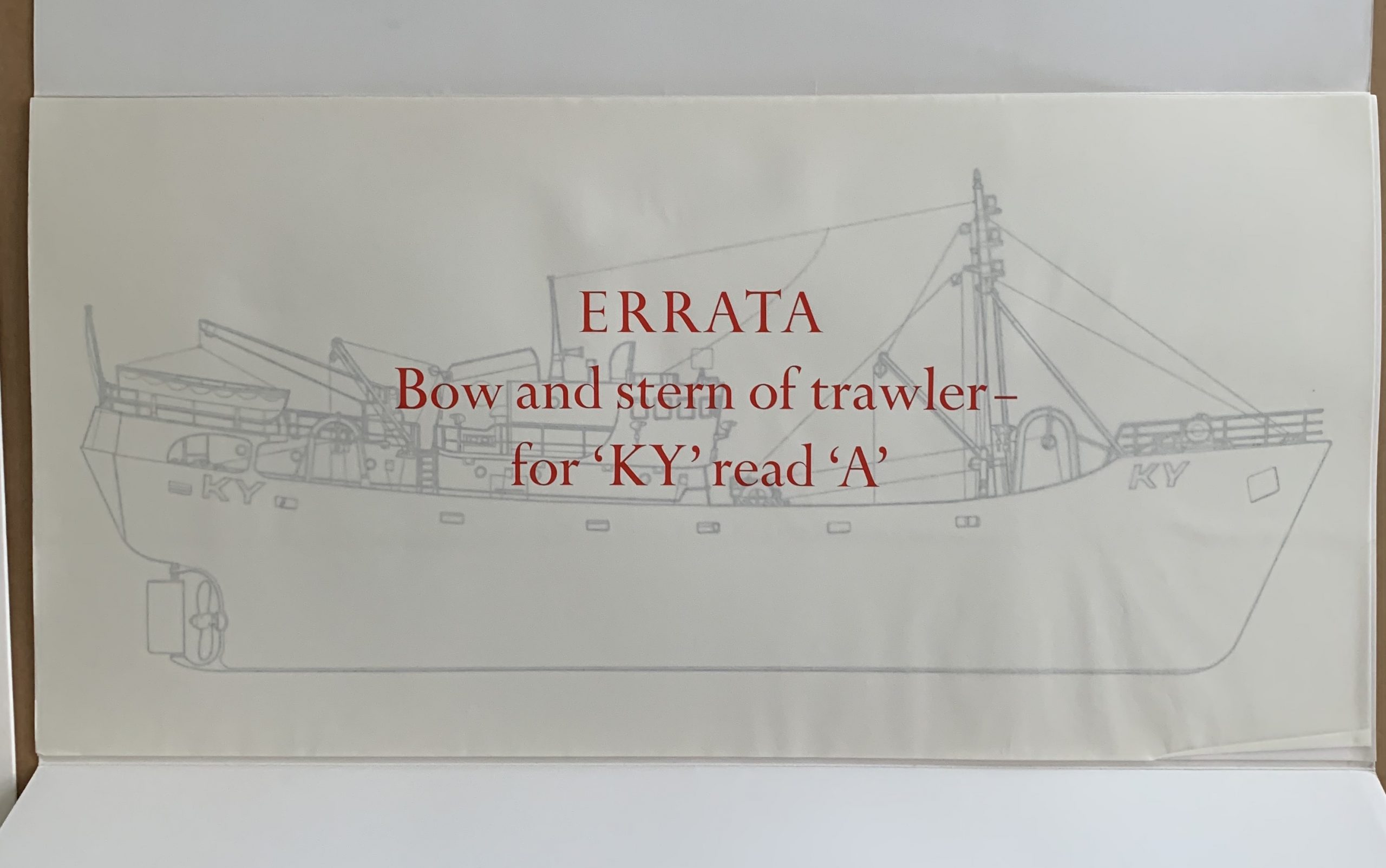 Dunsyre: Wild Hawthorn Press, 1970
25 x 55cm, b.w offset lithograph of a drawing of a trawler (by David Button) with a semi-opaque overlay of a text: ERRATA/Bow and stern of trawler for "KY" read A. " Is this a dirty joke? Not really Finlay's thing but it could be correct as A is often "arse" in vernacular and the stern of a trawler is the arse of the boat. KY is a brand of lubricant and a "trawler" might well be someone who "gets around". On balance I think we are forced to accept that this is somewhat blue which is surprising.
One of 300 signed and numbered examples in paper folder.
Murray 5.18. 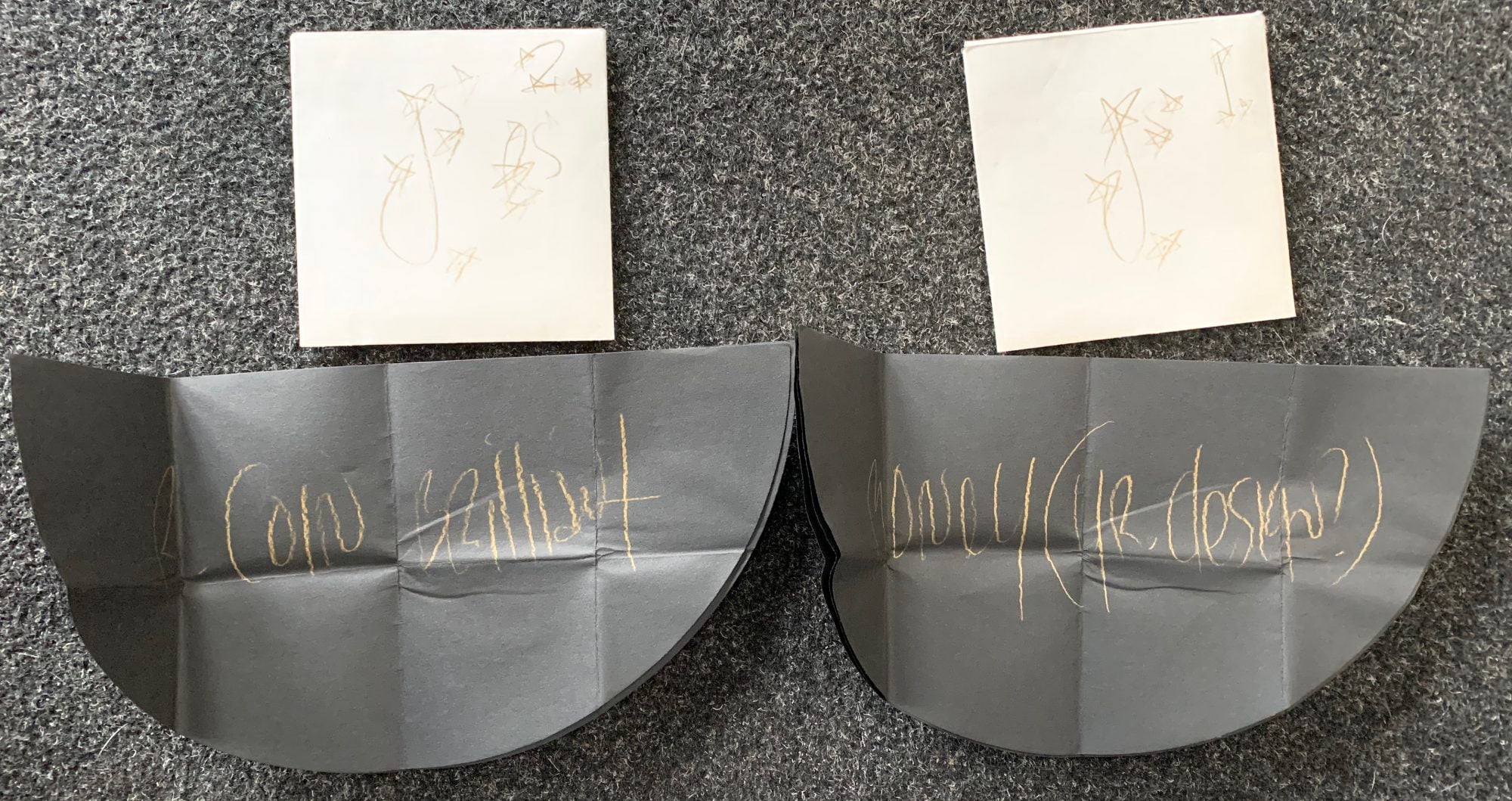 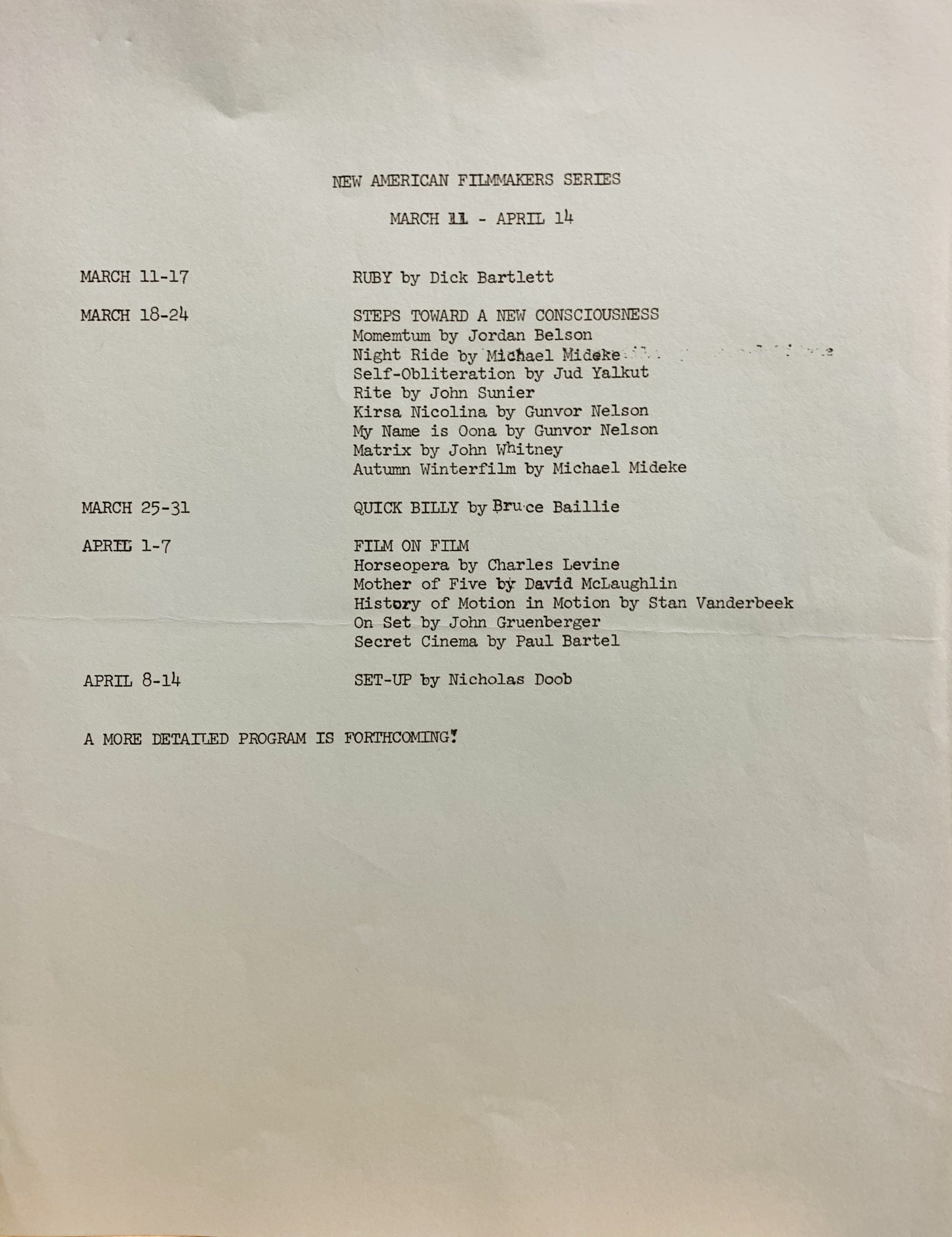 NYC: n.p. (Whitney Museum), (1970) 28 x 21.5cm, 1pp black on light blue offset lithographic leaflet for a "preliminary program" for this series of experimental films at the Whitney(mentioning that "a more detailed program is forthcoming"). Self-Obiteration by Yalkut is included. VG.... 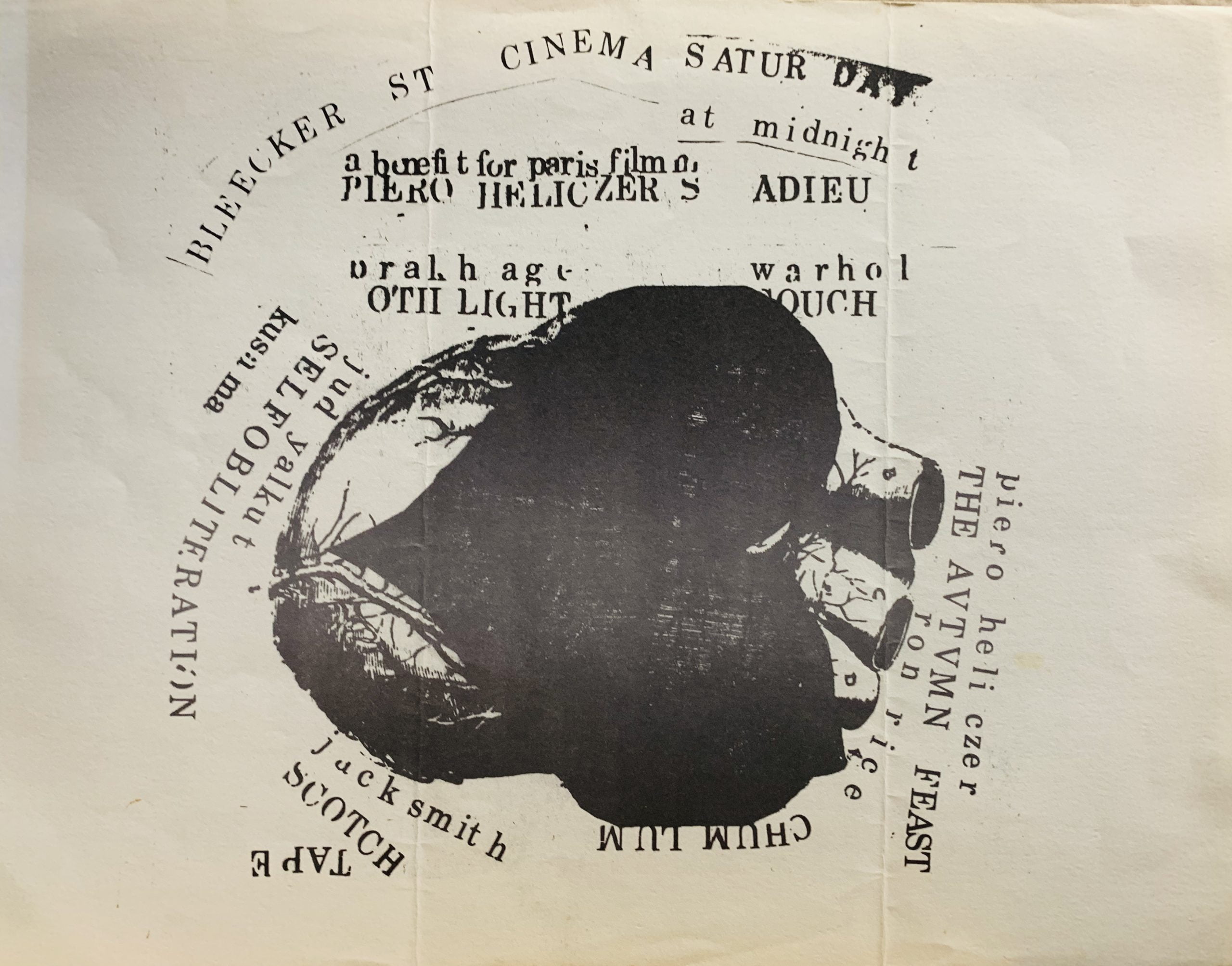 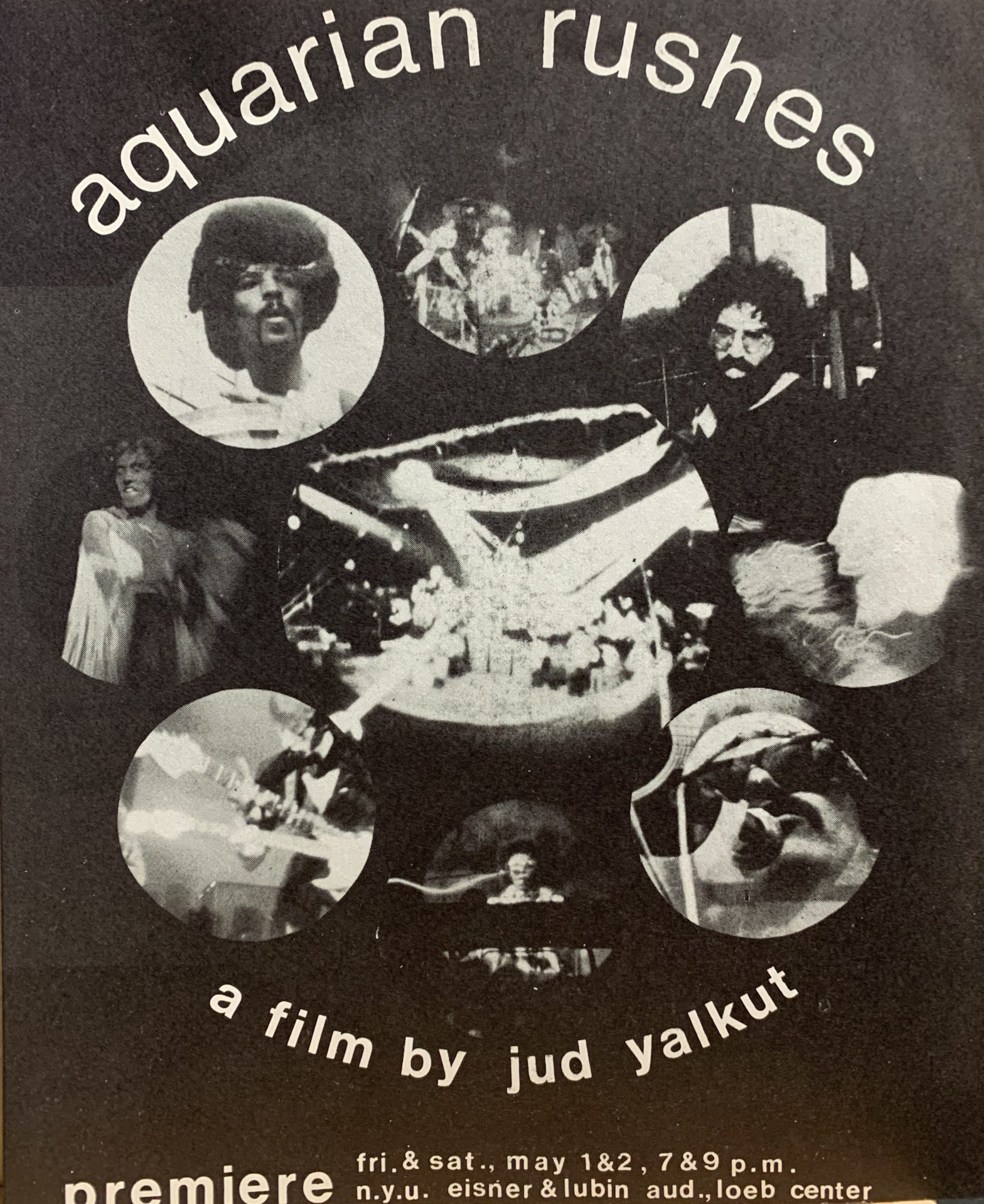 NYC: Loeb Center, n.d. (1970) 28 x 21.5cm, 1pp black on white offset lithographic leaflet for the "premiere" of Yalkut's 1969 film "Aquarian Rushes,"" which documented the festival. The status of this as the premiere is a little (purple) hazy as it appears to have been sown elsewhere before. VG. ... 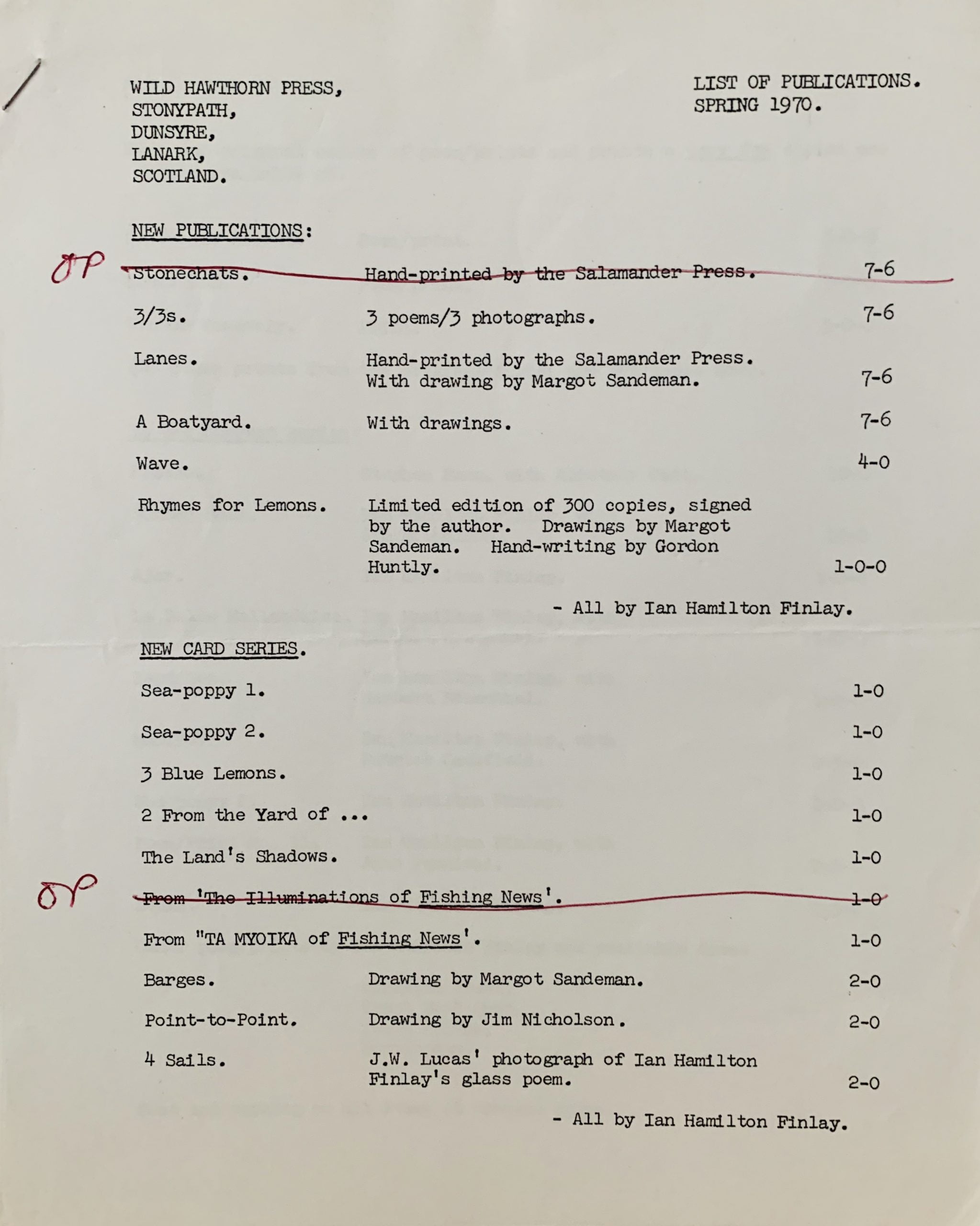 Posted at 21:39h in Miscellany

Dunsyre: Wild Hawthorn Press, Spring 1970
Two 25.5 x 20.4cm, 1pp offset lithographic price list for the Press stapled top left. Mentions a long list of new publications as the Press became more prolific including for the first time the artist's cards that Finlay began to favour as his most active area of publishing. Couple of vintage annotations in red ink indicating some items had sold out else VG+.