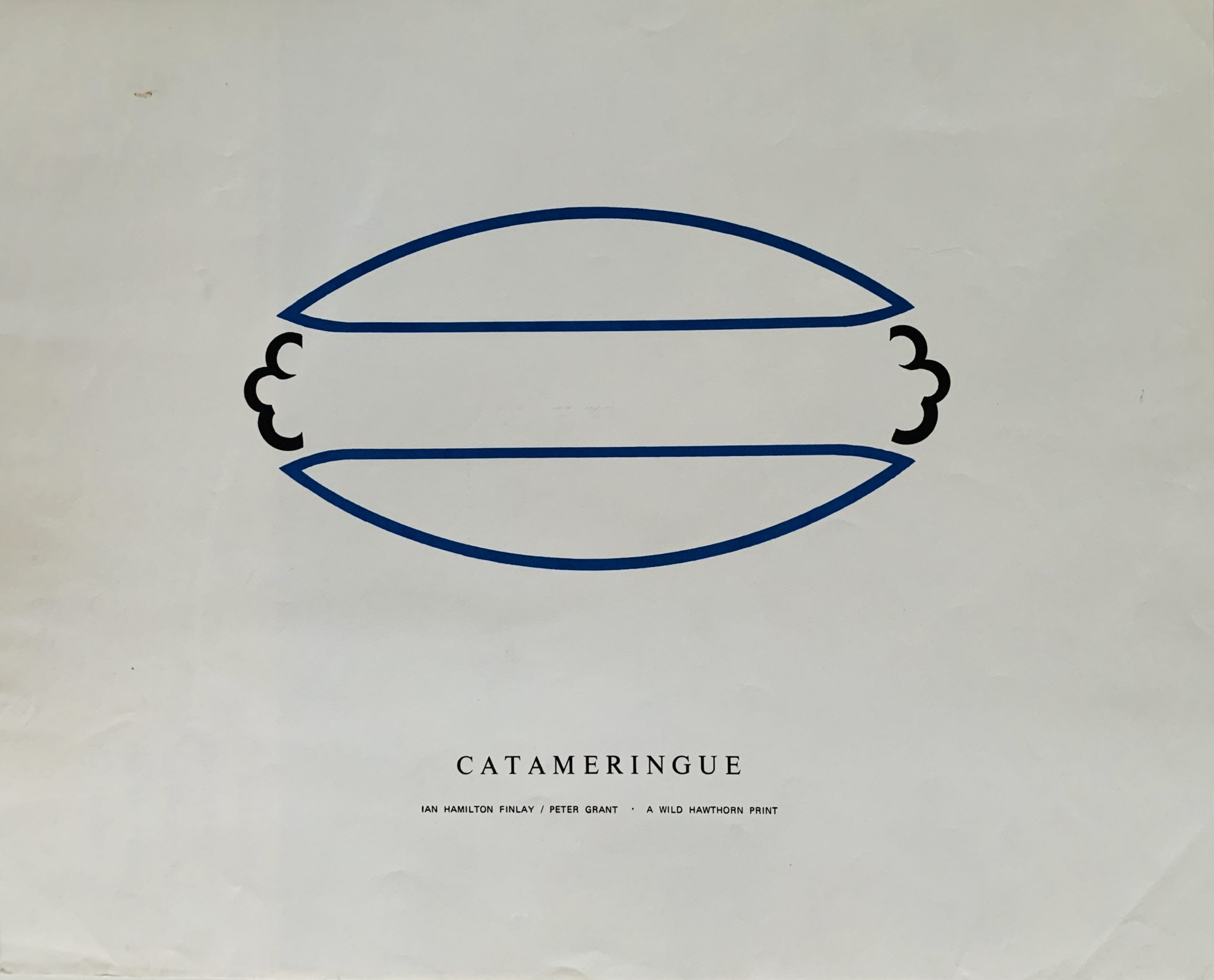 Dunsyre: Wild Hawthorn Press, 1970
35.5 x 44.5cm silkscreen in two colours on paper: a visual pun on a cat's paws, a boat and a tea-time cake. Drawing after Finlay's instruction by Peter Grant. One of 350 released. Slight mark on left else VG. 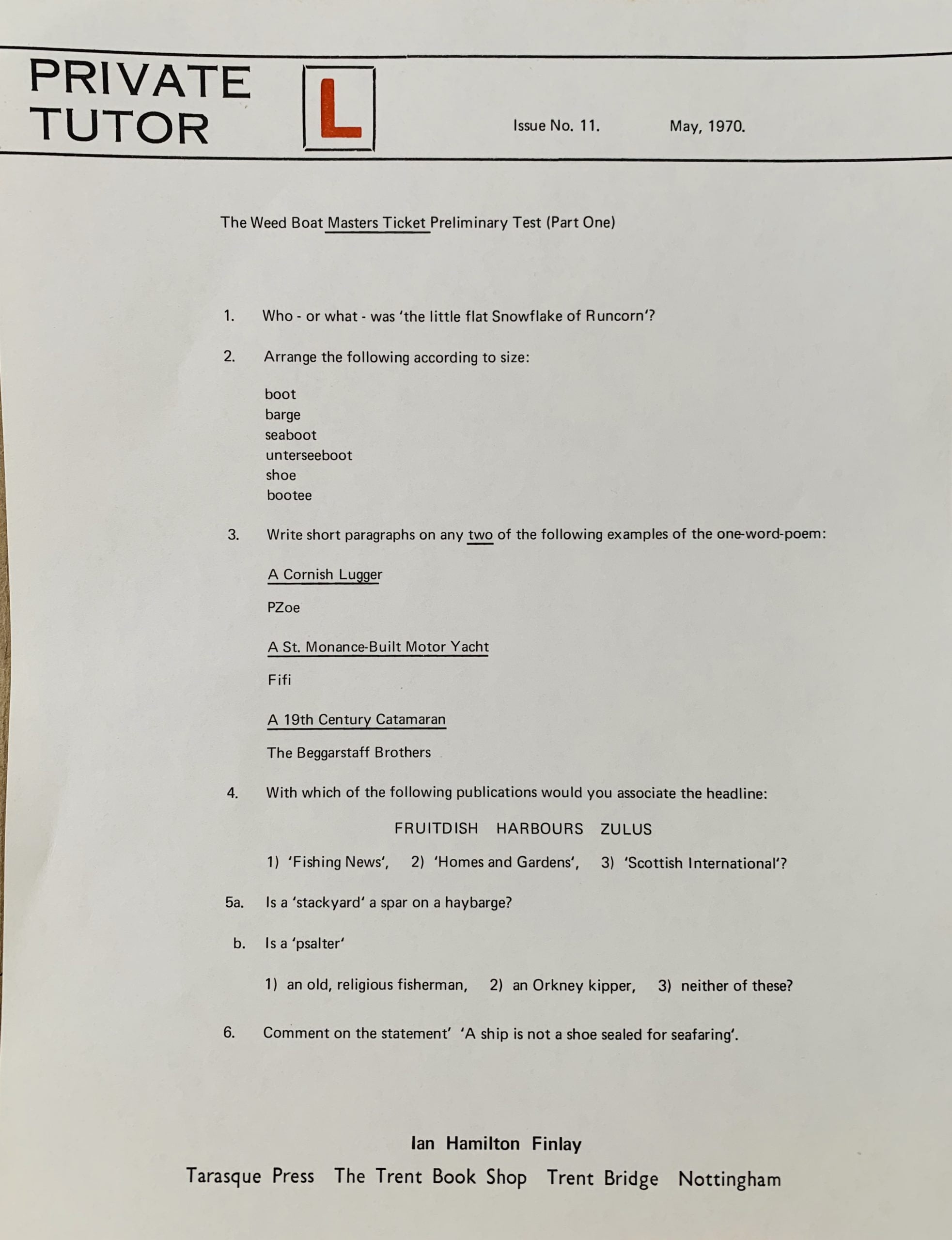 Nottingham: Tarasque Press, 1970
26 x 20cm, 1pp. Small broadside issued by The Trent Bookshop/Tarasque Press (formed by Stuart Mills and Martin Parnel in 1964) which had a different poet in each issue. This number has the Weed Boat Masters (sic) Ticket Preliminary test (Part One) - a faux examination where all of the questions appear to be about boats and fishing but have a humorous twist eg

6. Comment on the statement' (sic) "A ship is not a shoe sealed for seafaring'.

The "part two" of the test was published by Finlay's Wild Hawthorn Press as an artist's book in 1971 but this "first part" is an extremely rare item in VG+ condition. 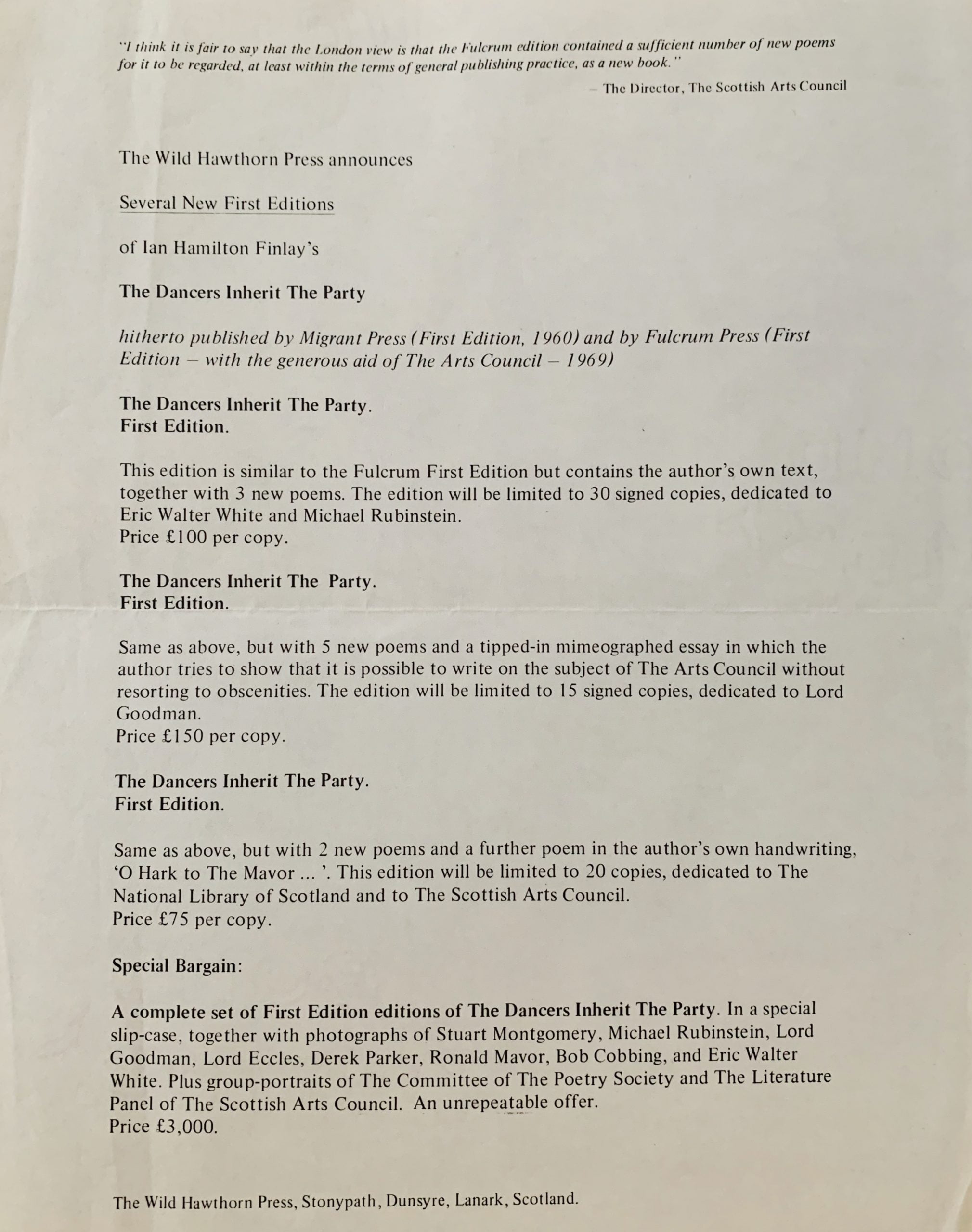 Posted at 08:59h in Miscellany

Dunsyre: Wild Hawthorn Press, Spring 1970
5.5 x 20.4cm, 1pp offset lithographic leaflet with an hilarious text pretending to promote "several first editions" of the Dancers Inherit The Party. This may be Finlay's first 'attack" artwork (later they were usually cards) where he calls out in an amusing manner Fulcrum Press and the Arts Council for the former's reprinting of his book and their mislabelling of it as a "first edition". Having asked the Arts Council to help in stopping this bad practice and receiving scant attention from them, Finlay also uses this leaflet to seek some revenge. The text sarcastically suggests that the new multiple "first editions" might include photographs of members of the Arts Council as additional material and include an essay "in which the author tries to show that it is possible to write on the subject of the Arts Council without resorting to obscenities. The edition will be limited to 15 copies, dedicated to Lord Goodman."
We had this in our hands for years, thought it just a leaflet promoting the original book and shamefully did not look in detail at it until now for this cataloguing. It is quite a find - probably, as we say, the first time Finlay used a publicly available publication to hit back at his enemies and those who slighted him or failed to live up to his opinion of how they should act.VG+. 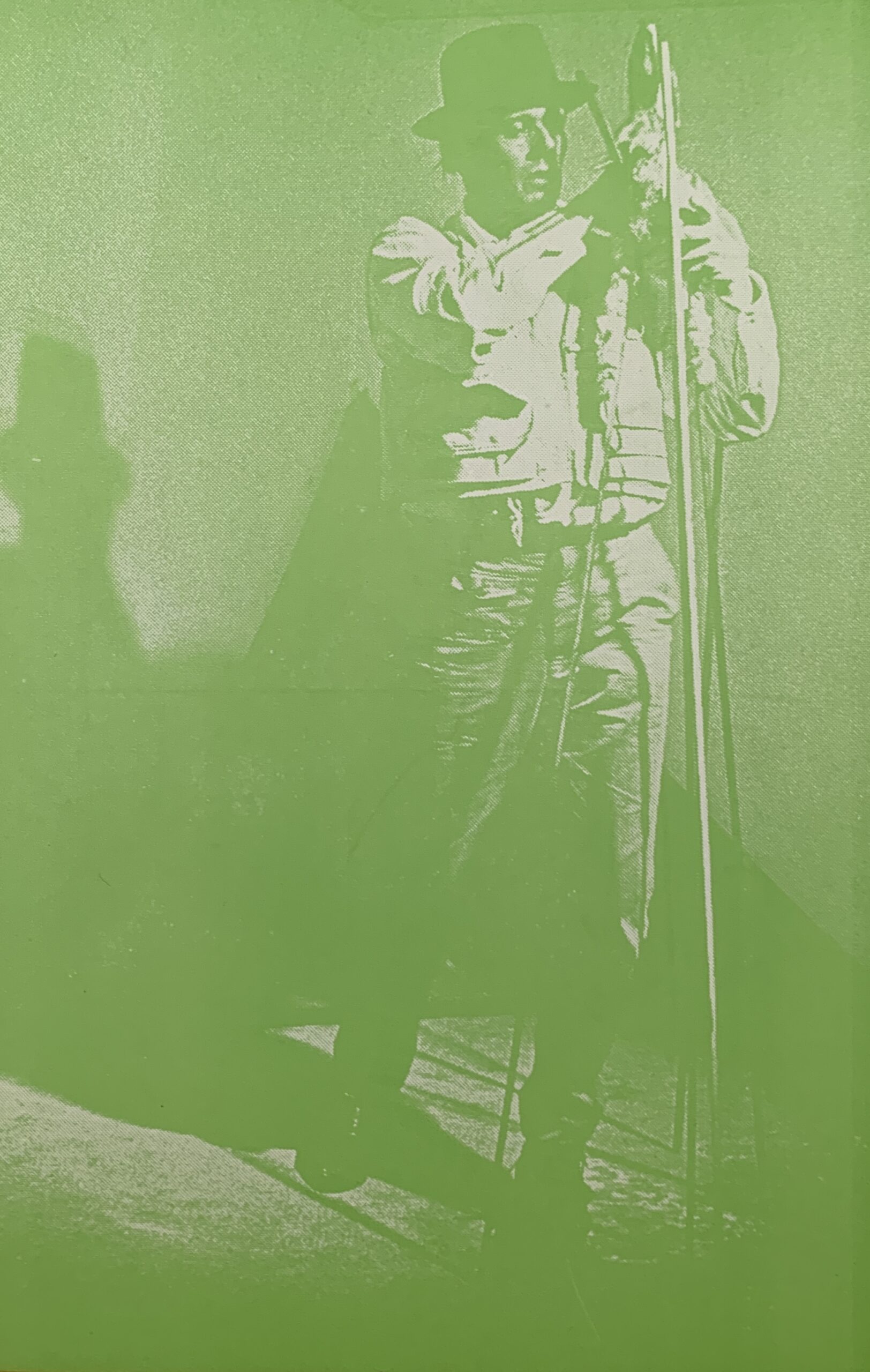 London: Angela Flowers, 1970 16 X 10.2cm, 2pp. Limited edition postcard with an image of Beuys on the front "explaining art to a dead hare" by Ute Klophaus from the action "Eurasia, 32. Satz der Sibirischen Symphonie" in 1963 printed in bright green. This has a lengthy note in German from an unknown hand in blue ink, else VG+. Scarce.... 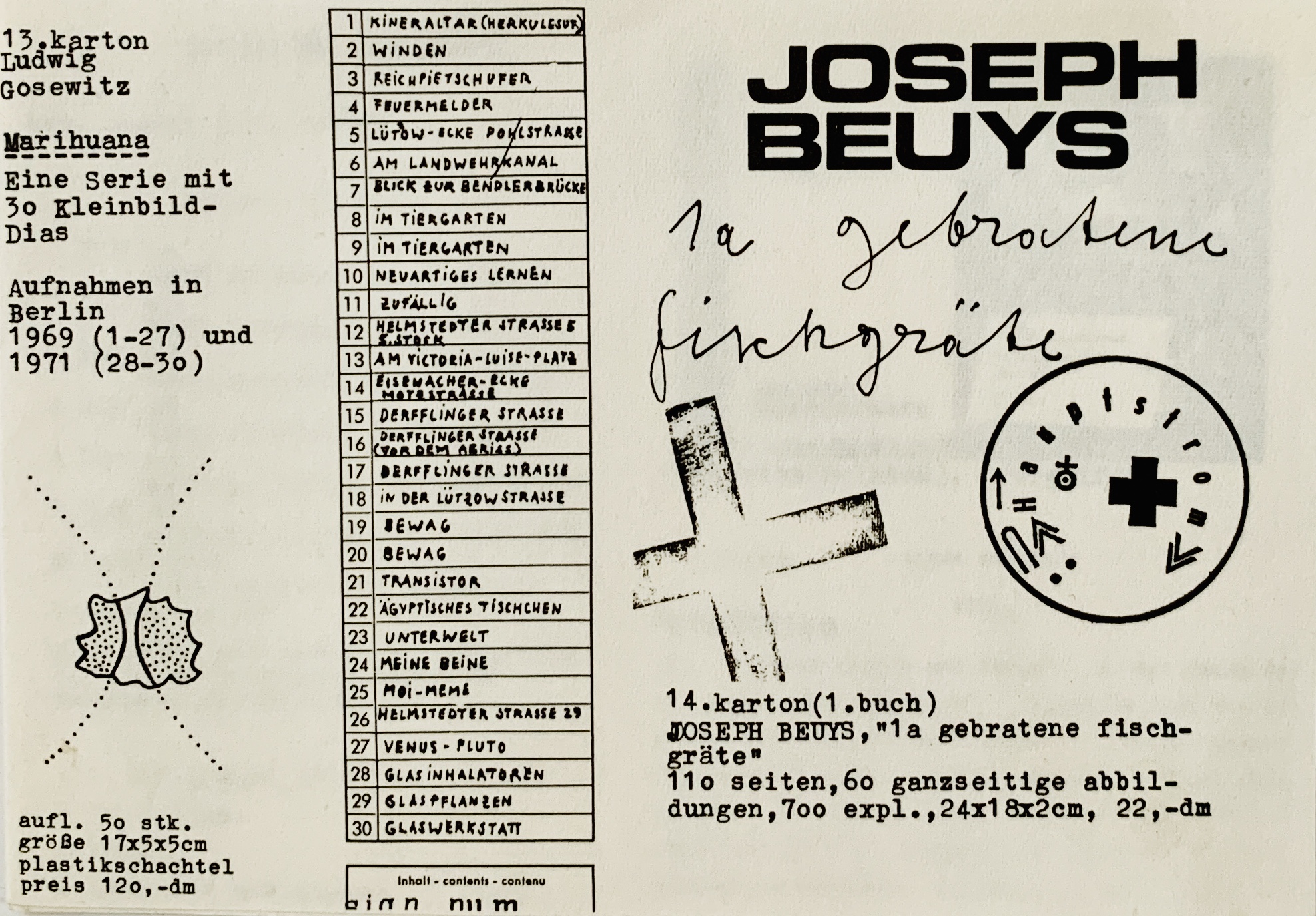 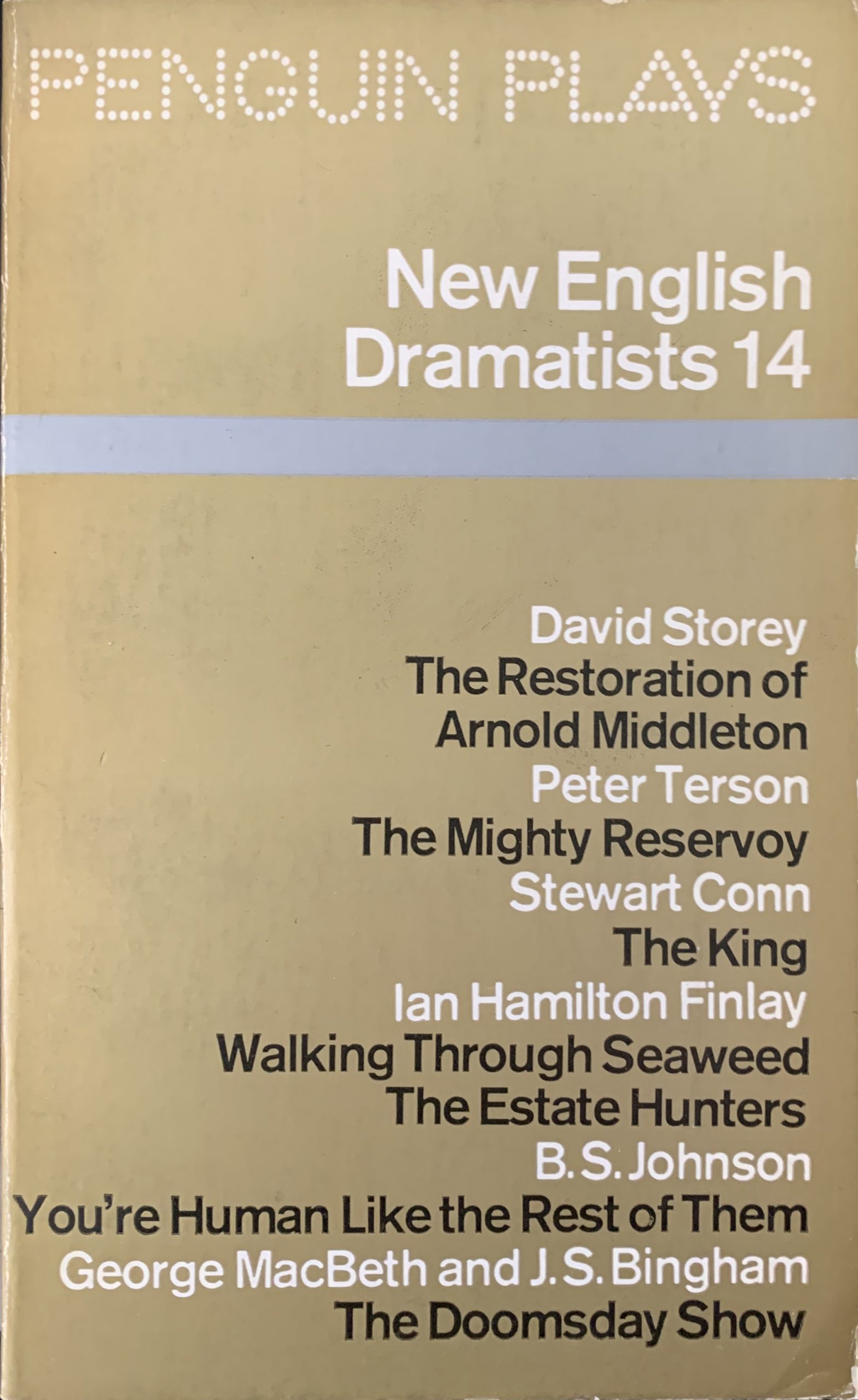 04 May WALKING THROUGH SEAWEED/THE ESTATE HUNTERS IN NEW ENGLISH DRAMATISTS 14. 1970.

London: Penguin Books, 1970
18 x 11cm, 254pp. Original card wrappers. The fourteenth of the Penguin series of anthologised plays - here notable for the inclusion of two plays by Ian Hamilton Finlay written in the mid 60s although here given a copyright of 1970. The first Walking Through Seaweed is a coming of age discussion between two young girls where the tricky act of balancing on wet seaweed is a metaphor for learning how to be an adult. The Estate Hunters is a series of scenes between father and son who go fishing but the son disappoints (as always). The two plays were also published translated into German in the book … "Und alles blieb wie es war: vier einakter" from 1966. The foreword to the book is by Edwin Morgan. VG+