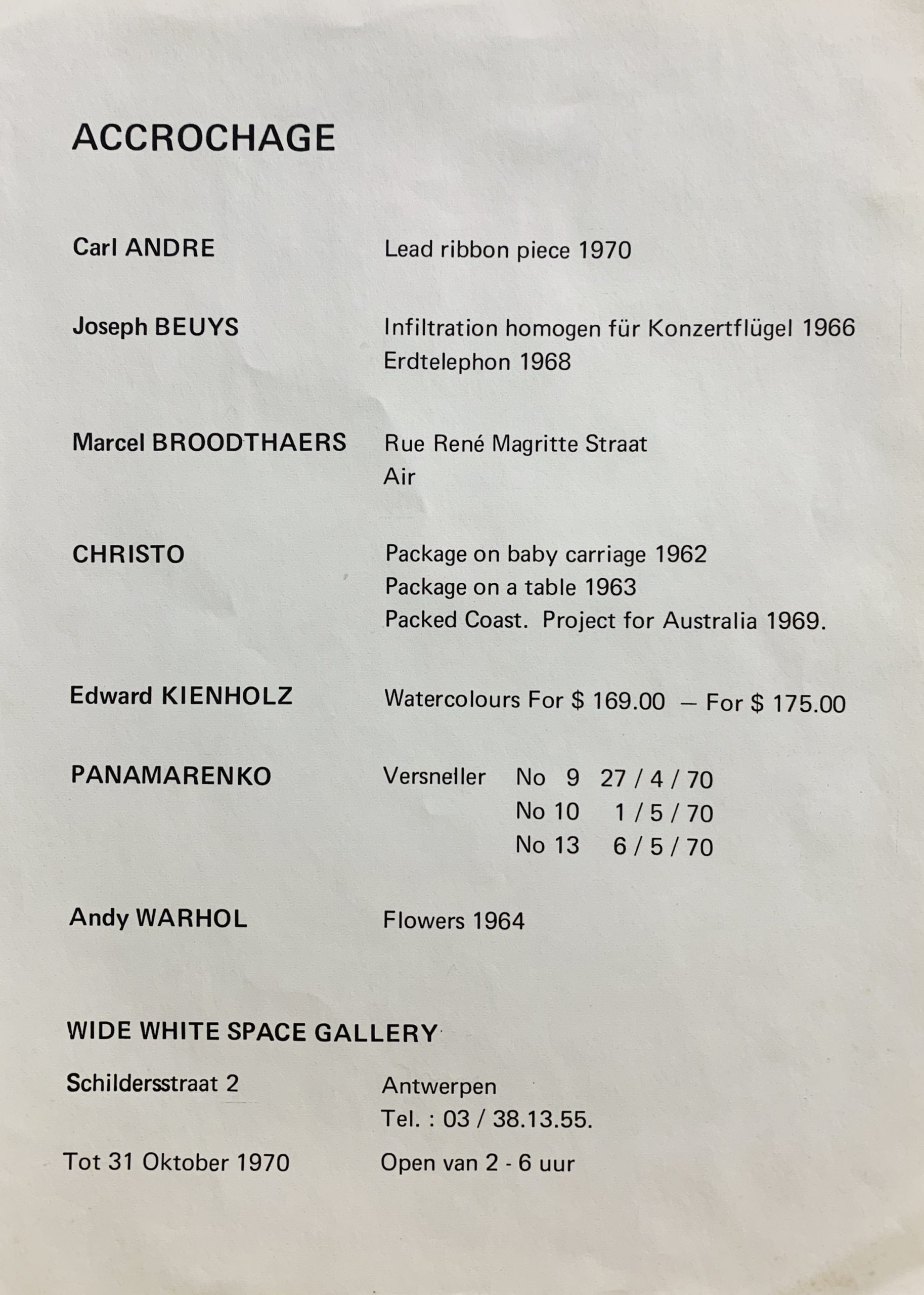 Wide White Space, Antwerpen 1970
25 x 18cm, 1pp gallery handout for this group show listing major works by significant artists including a Warhol Flowers work from 1964. There are two works by Beuys in the show - Infilltration homogen dur Konkertflugel from 1966 and Erdtelephon from 1968. Typographic design only. VG+. 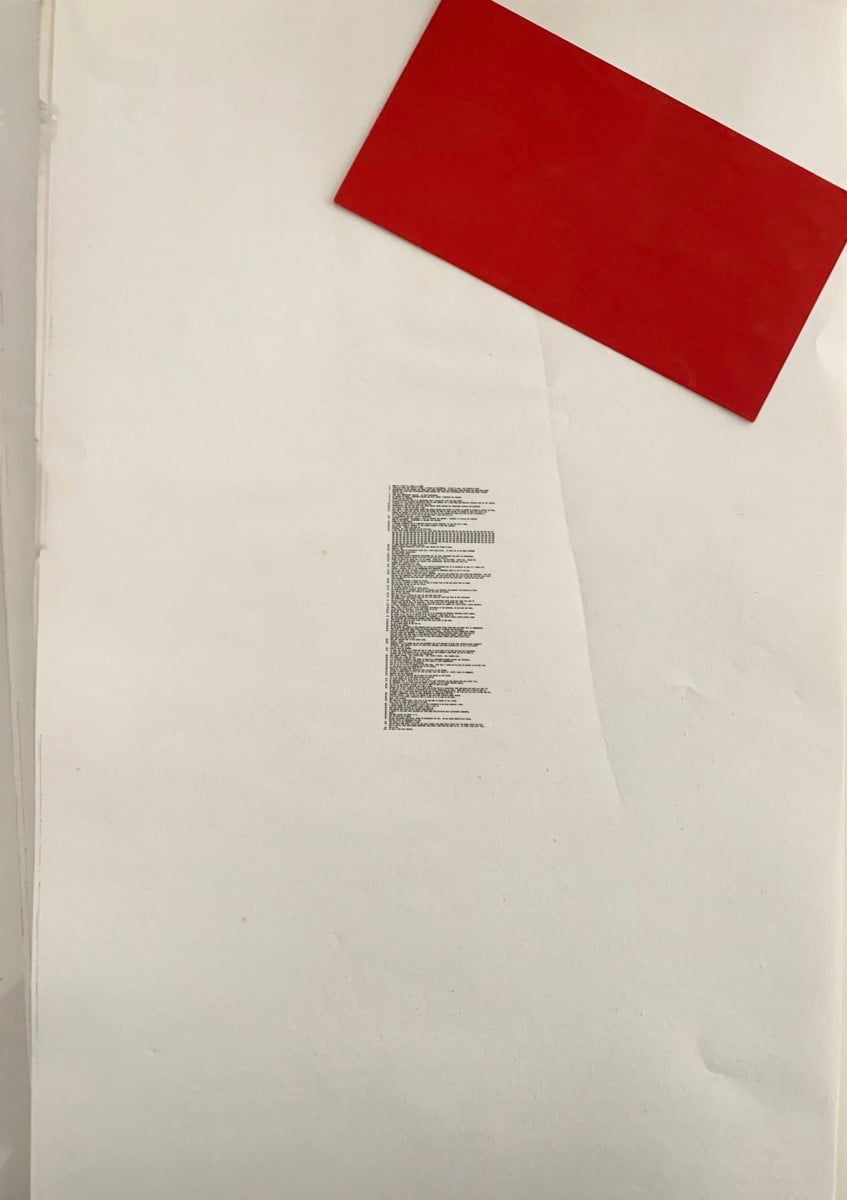 USA: s.p. (Byars), 1970 48 x 28 cm b/w offset lithographic print on wove paper with a tiny text in the middle of the sheet. A scarce and relatively early print multiple by the romantic minimalist. VG+. Rare. ... 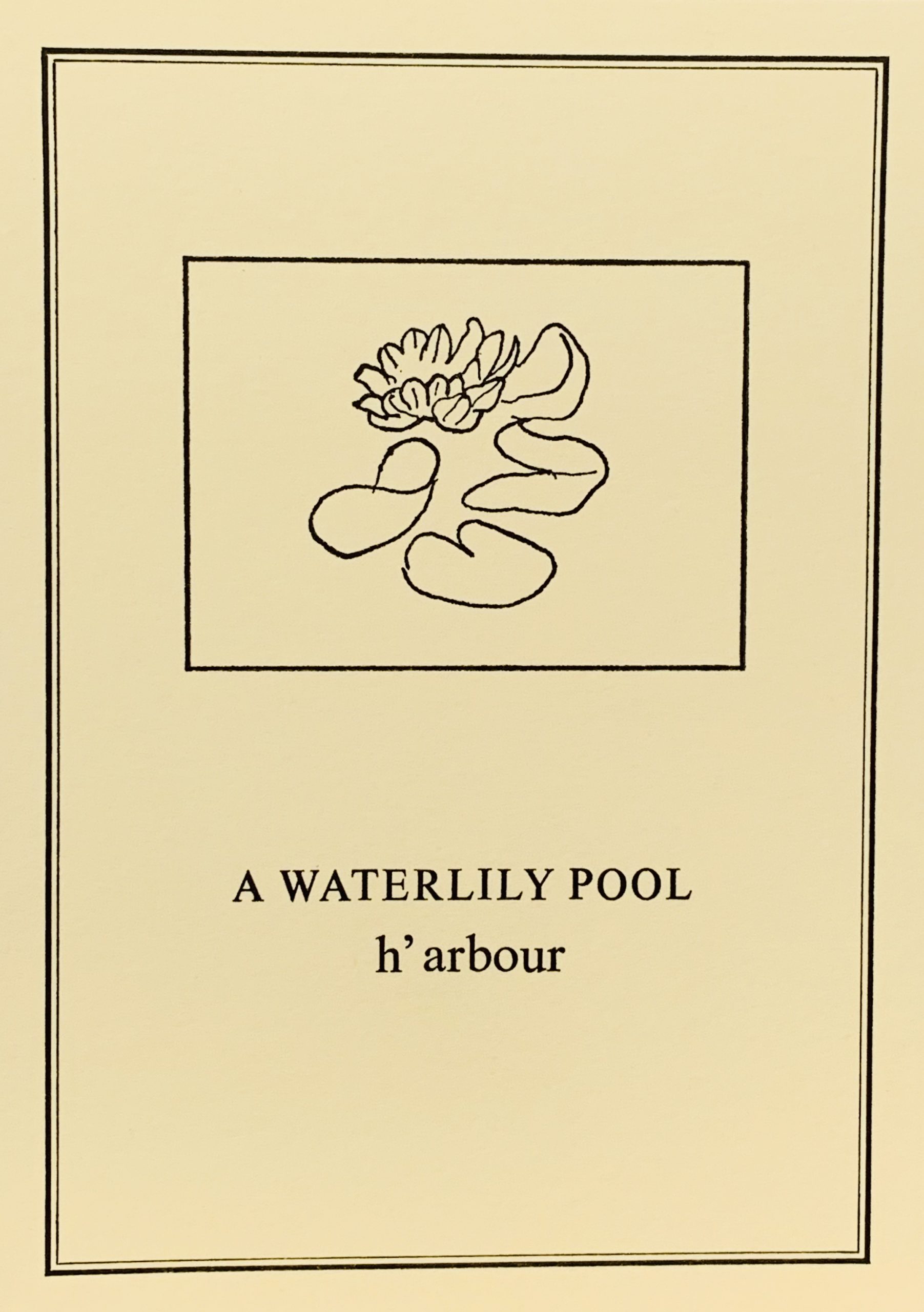 Posted at 14:53h in Artist's Postcards

Dunsyre: Wild Hawthorn Press, 1970
15 x 10.5cm, 2pp. The card has a drawing by Gardner on the front of a floating water lily. the text below "A WATERLILY POOL/h'arbour" reminds one of the way the leaves in a water lily can enclose a space of water and also a shelter for small insects or even fish - hence an arbour of sorts. VG+. 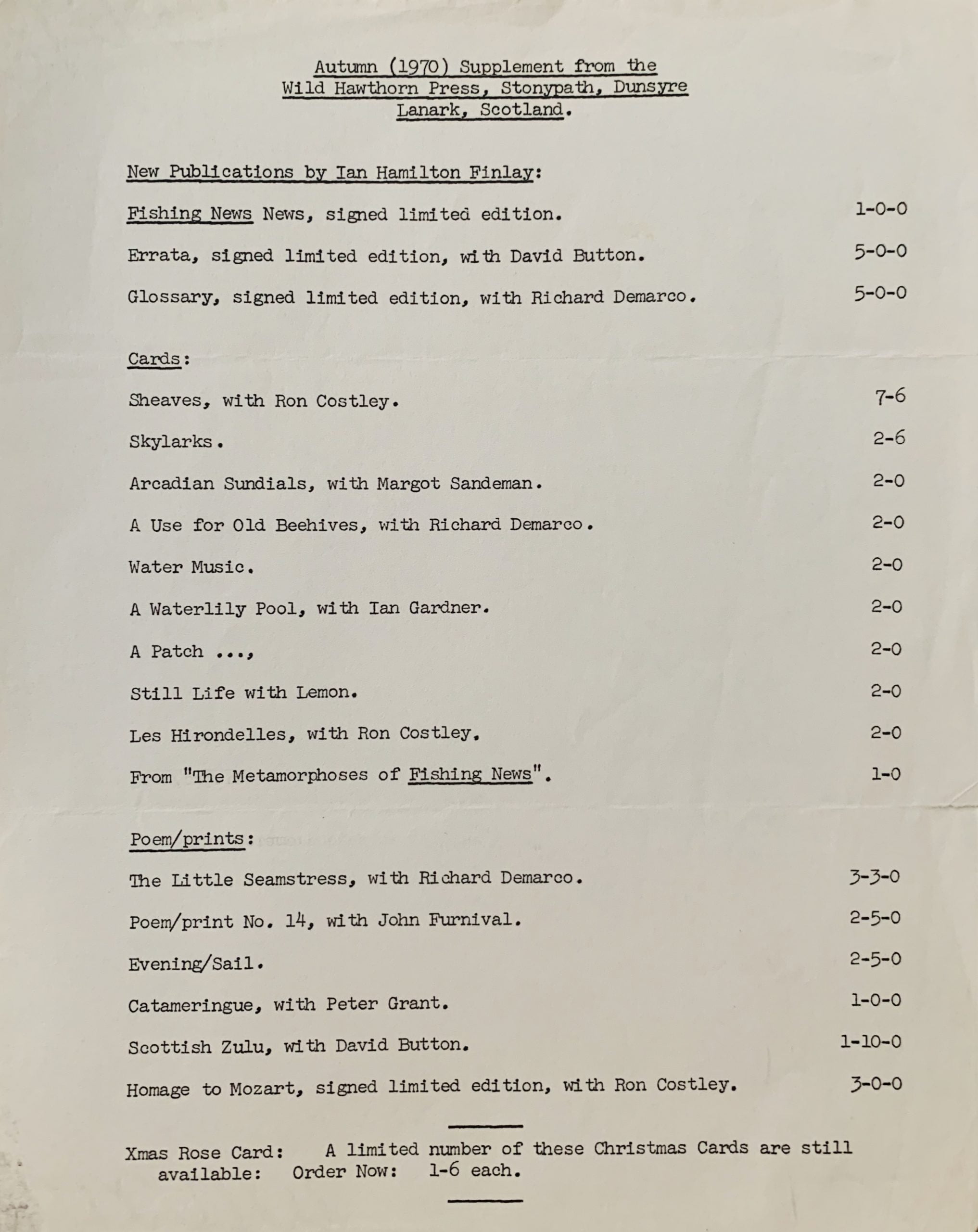 Posted at 21:44h in Miscellany 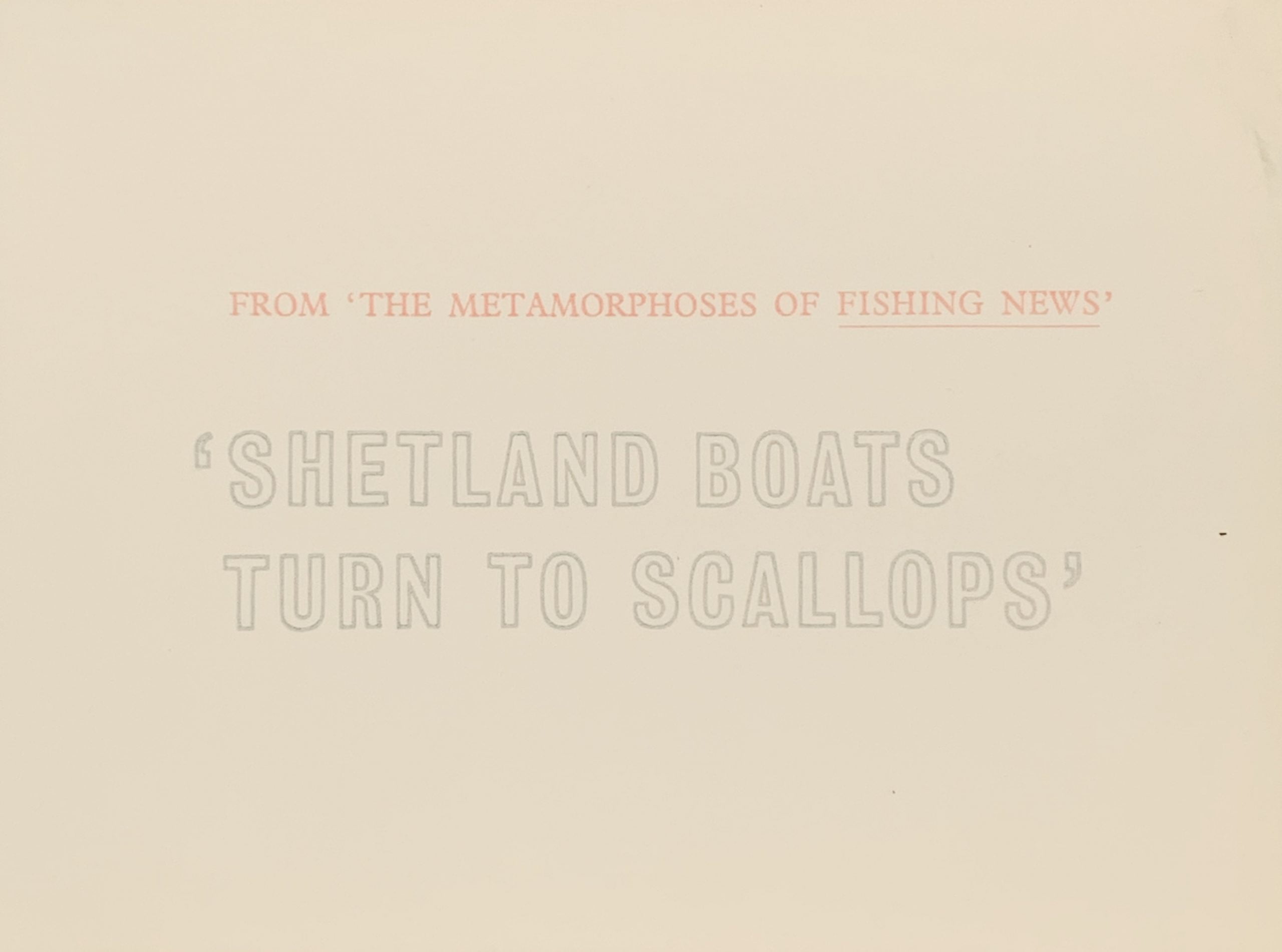 Posted at 14:45h in Artist's Postcards

Dunsyre: Wild Hawthorn Press, 1970 12.5x 6.8cm, 2pp. The card is the one of a series that reproduce phrases found in journals and newspapers together to tell a quasi-story or visual poem. Here the headline "SHETLAND BOATS TURN TO SCALLOPS" is on the surface a tale of a change in fishing strategy - but of course it also can be read as a amusing transformation of the boats into shells. This reminds one of the classical tales of Ovid's "Metamorphoses" where every story is of a change in form for a participant (thus the use of 'metamorphoses' in the card's title). Additionally scallop's hollowed out shells have the shapes of boat hulls and Finlay has chosen an outline font for the main text which reflects that hollowing out in some typographic analogue way. As ever, several meanings are to be found in a simple work. Fine. 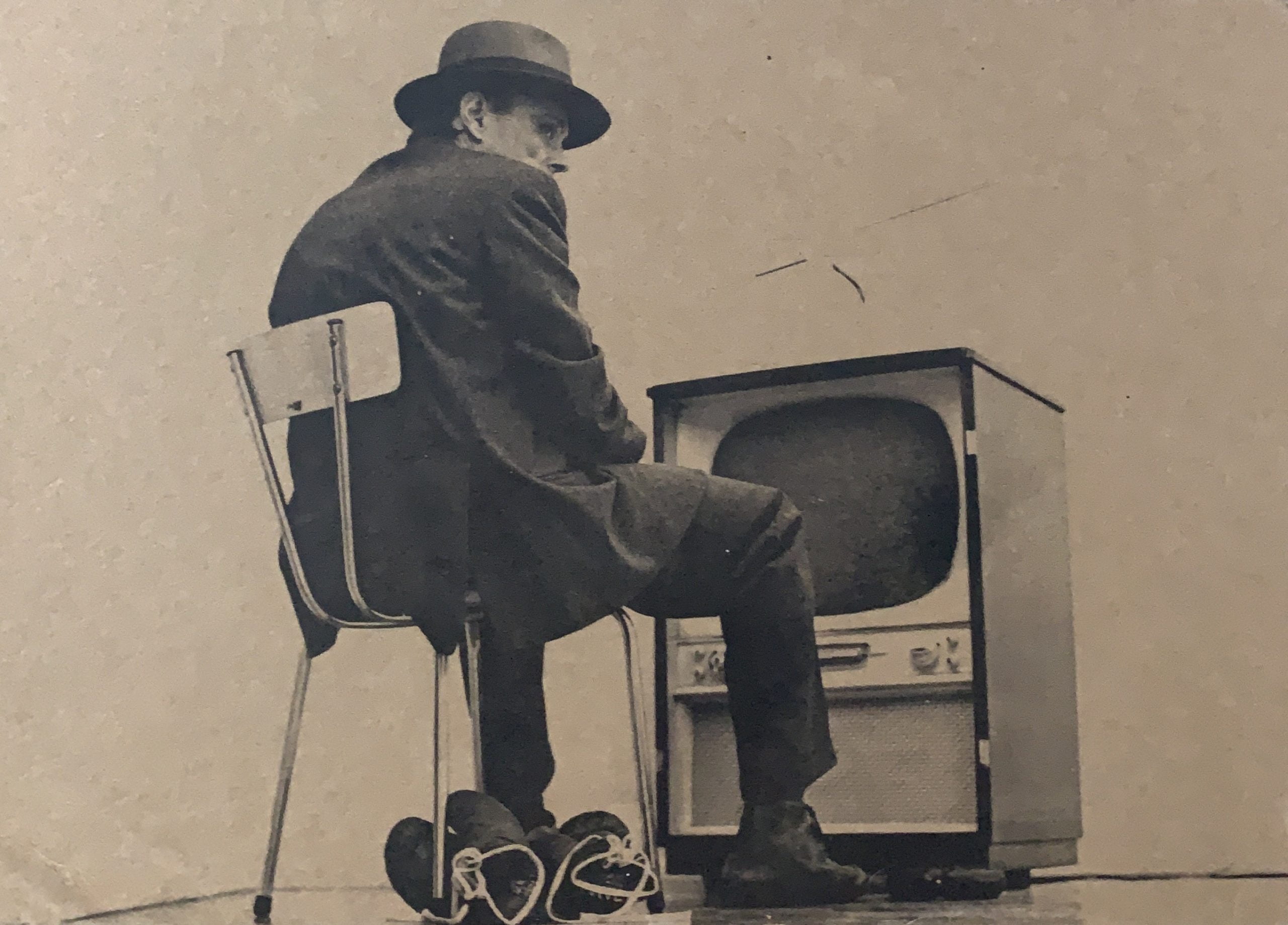 Hannover: Video Galerie Gerry Schum, 1972
15 x 21cm, 2pp. The announcement card issued to promote both the video edition FLIZ-TV released in only 6 copies and the TV exhibition IDENTIFICATIONS which was show on the Sudwestfunk Baden-Baden as well as in the Kunstverein Hannover (as a preview of the tv show). A famous event where Beuys sat in front of a TV with boxing gloves carving a price of blood sausage. A mailed copy - VG+. 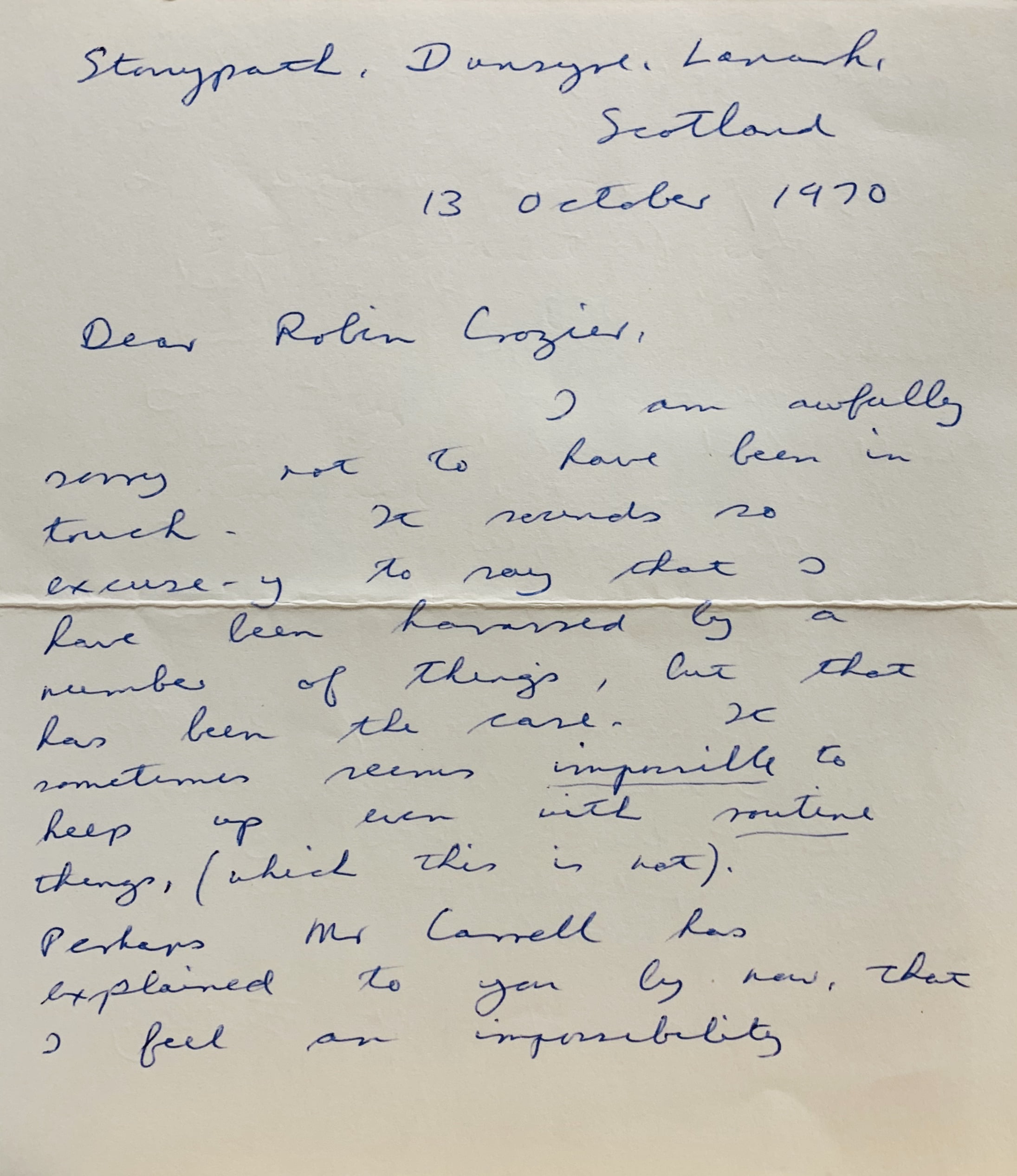 Finlay apologises in the letter for not completing the artist's book EXERCISE X which he had promised to Crozier to publish. "It was silly of me to suggest in the first place".
joint:
Hand addressed and rubber stamped envelope which has been neatly torn open. 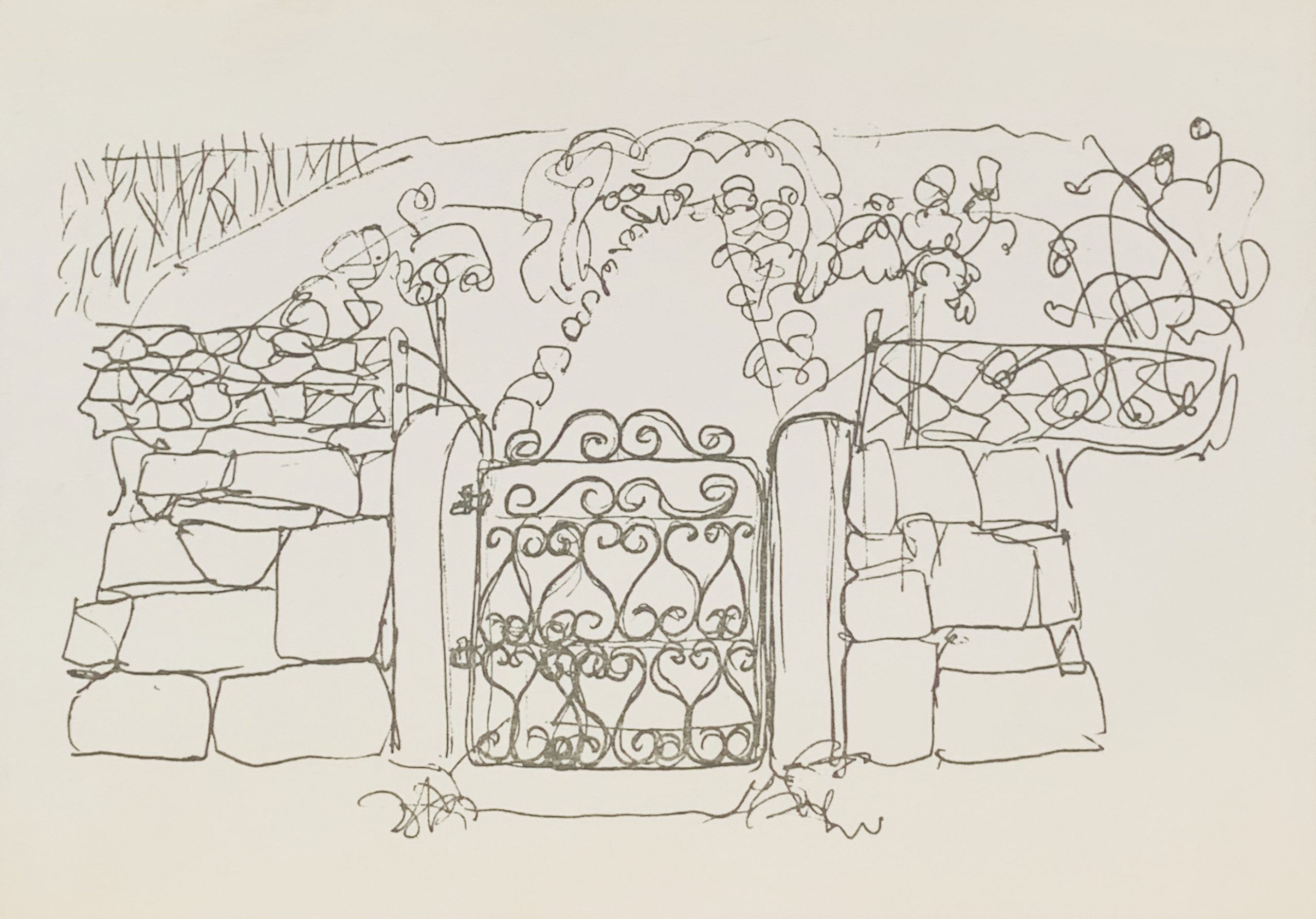 Posted at 14:37h in Artist's Postcards

Dunsyre: Wild Hawthorn Press, 1970
10.5 x 15cm, 4pp. Artist's postcard with a line drawing by Margot Sandeman of a garden gate and various flowers.
The text inside the card reads:

"ARCADIAN SUNDIALS. All Times on these sundials are Solar Time."

The elements of the garden all cast shadows and can be regarded as measures of solar time. This card is signed "love from Margot (Sandeman)" in ink and is else VG+.
With original unprinted postal envelope. 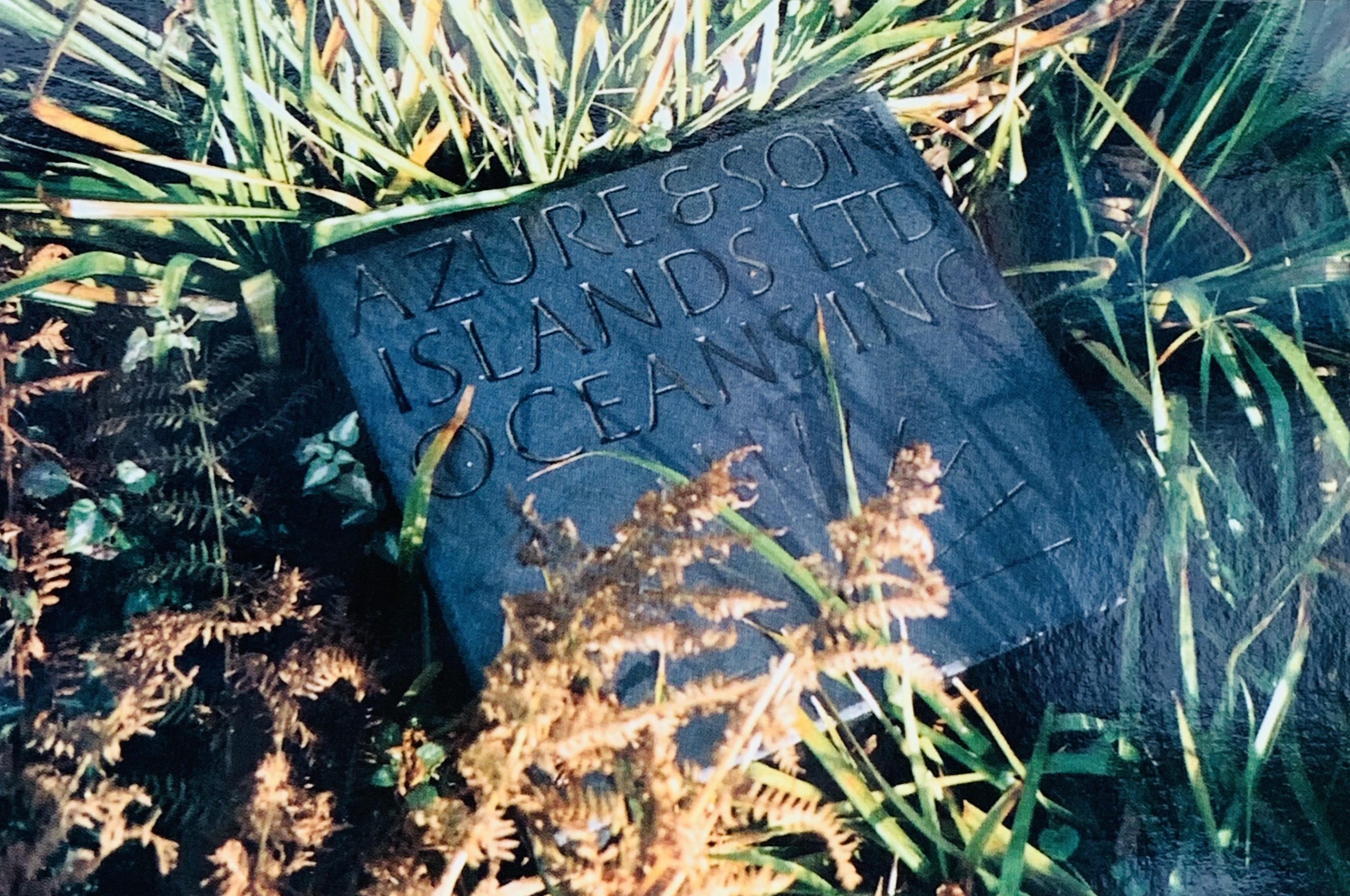 Posted at 14:16h in Artist's Postcards

Dunsyre: Wild Hawthorn Press, 1970
10.5 x 15cm, 2pp. Full colour artist's postcard with an image of a sundial made by Finlay for later installation in the High Street in Biggar. The stone work which was inscribed with the text "AZURE & SON. ISLANDS LTD. OCEANS INC." cut in slate by Michael Harvey. This was the first colour postcard that Finlay published under the press' imprint.
Azure of course is the bright blue that is usually associated with the sky on a bright lovely day - and as a result a friend to a sundial that works best on such bright days. The three references to Azure/islands/Oceans - therefore cover the full landscape of sky, land and sea.
The text was originally a poem published in A Sailor's Calendar by the Something Else Press but in a letter to Stephen Bann (Page 80 of Midway, 2014) Finlay explains that the work is to be sited on a traffic island (hence the Island reference) and that "& SON/Ltd./INC." places the work relative to local commerce (Finlay refers to traffic in the sense of both vehicle movement and economic activity). Finlay also notes he is pleased the the work would be in Biggar where his rival/enemy Hugh McDiarmid lived. A sculptural two finger salute. 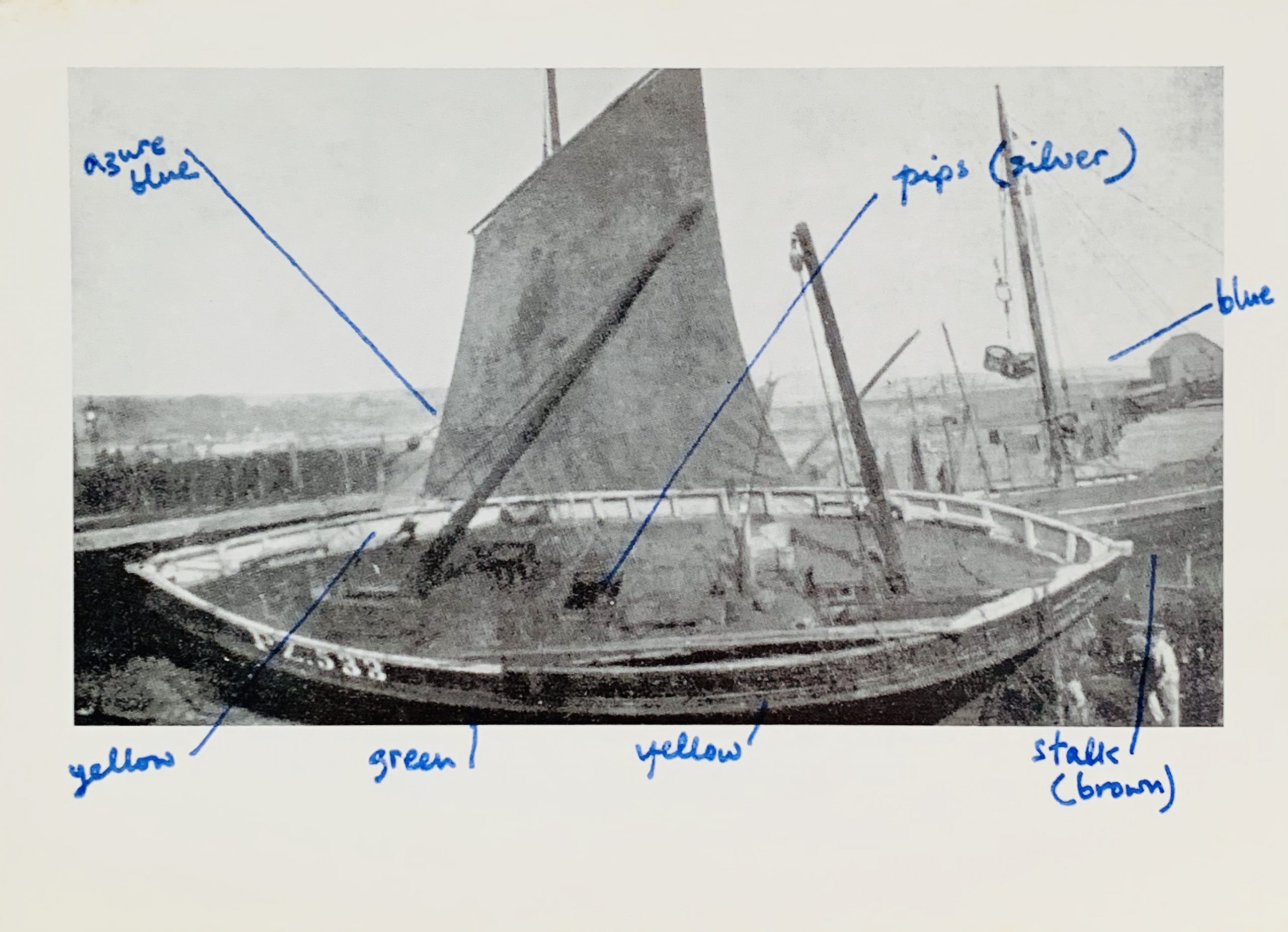 Posted at 14:59h in Artist's Postcards

Dunsyre: Wild Hawthorn Press, 1970
12.3 x 17cm, 2pp. Blue and black on white artist's postcard with a photograph of a boat with colour annotations (words) to different parts of the vessel. Lemons being a common theme of classical still life paintings, Finlay also often compares boats with lemons. Here by the addition of the colours is able to make the image even more like both a domestic scene and a seascape. VG+.