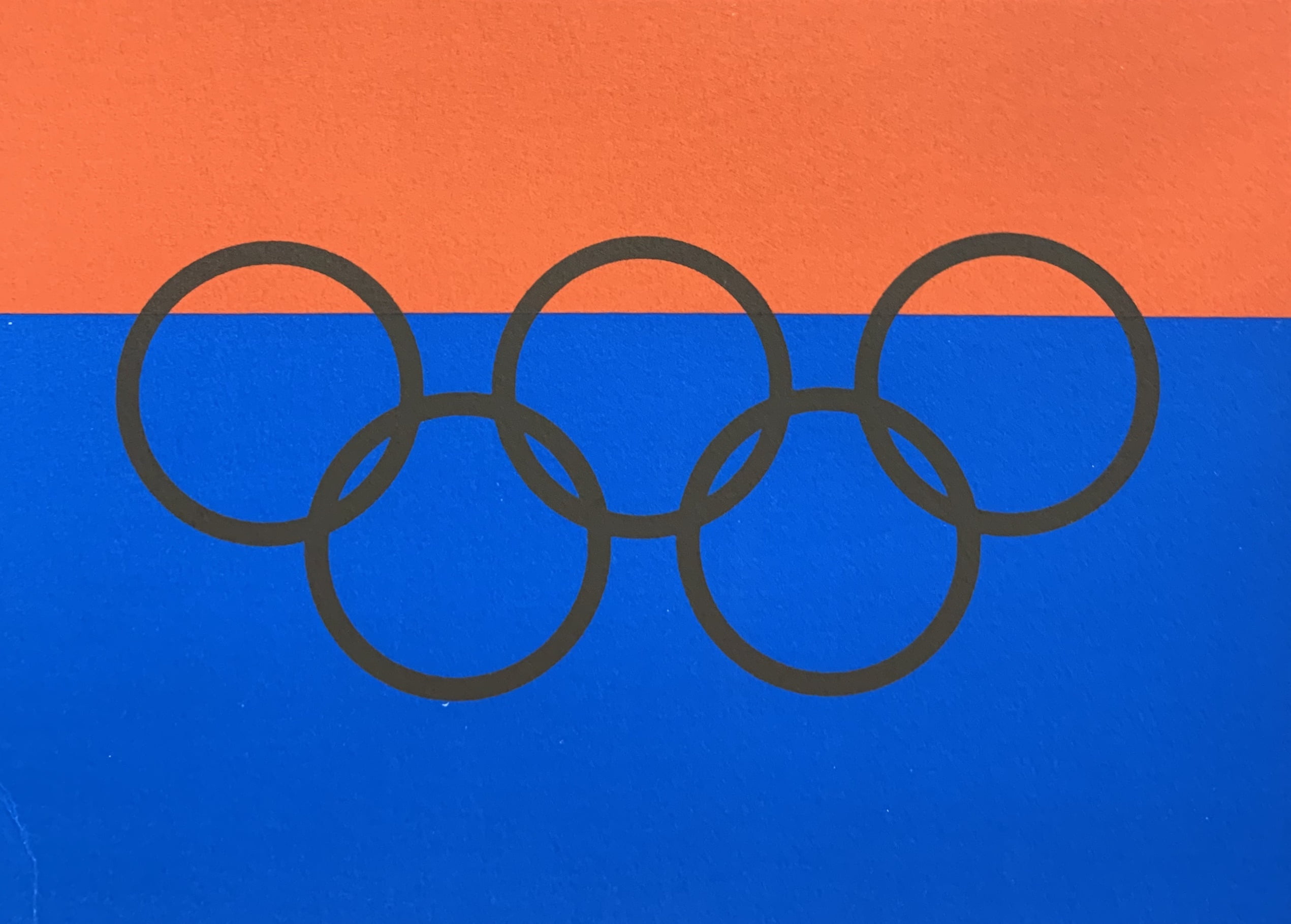 Posted at 09:22h in Artist's Postcards

Dunsyre: Wild Hawthorn Press, 1972
10.5 x 15cm, 2pp - three colour screenprint with images of the Olympic rings on the two colour background red and blue. Design by Costley after Finlay's instruction. The card is a homage to the boat builders Walter Reekie at St. Monans where "ring netters" were built (a form of bottom fishing that was found not to be quite as environmentally destructive as pulling heavier nets over the bottom as the nets were much lighter). The boats are represented here by the rings and the blue is presumably the sea and the red a setting or early morning sky. 1972 was an Olympic year so the card was (unofficially) released as part of those events although those Olympics became the most tragic in history after the terrorist attack on the Israeli athletes.
Finlay re-issued a similar card in 1996 - another Olympic yearVG+. 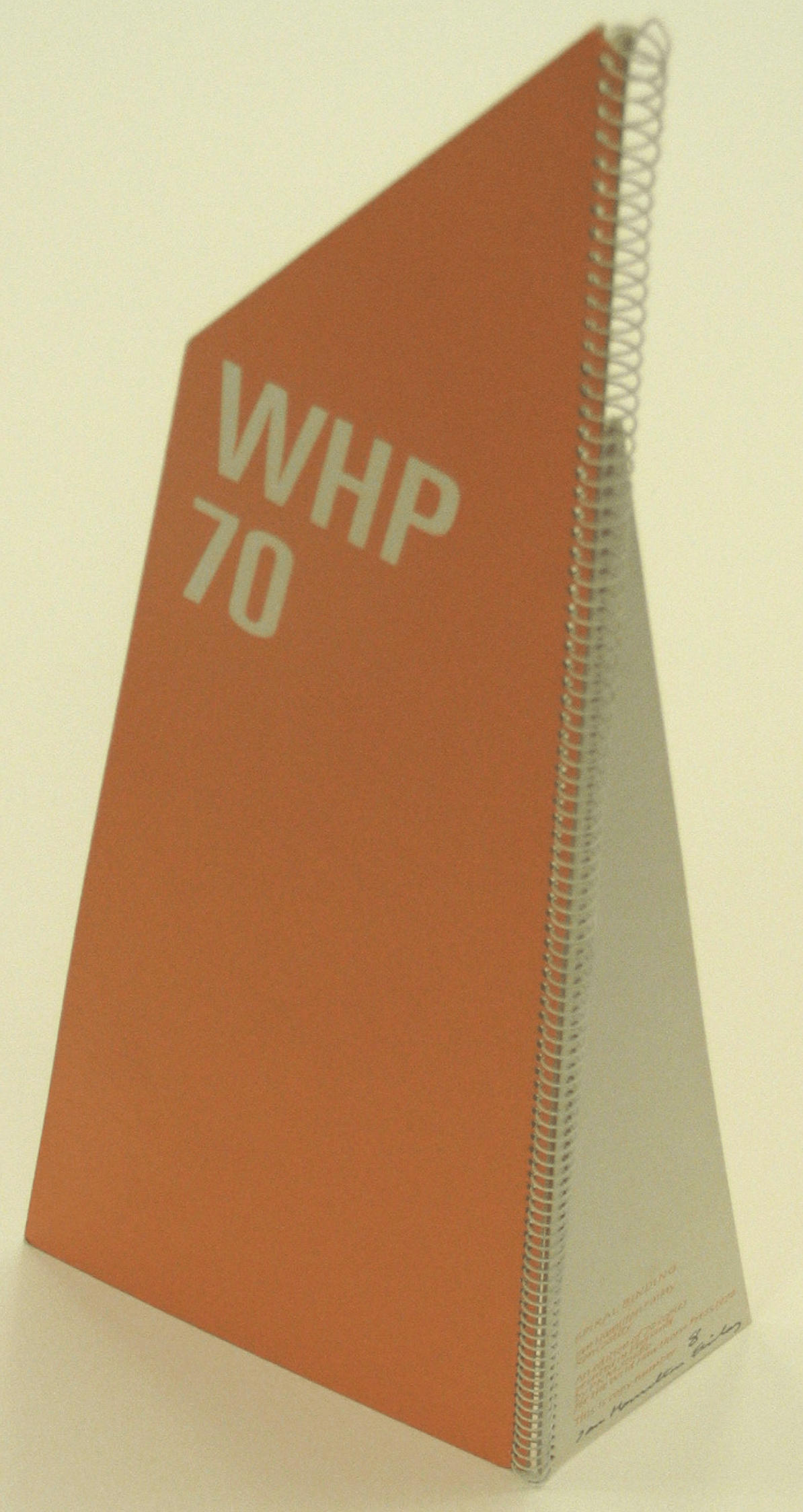 Dunsyre: Wild Hawthorn Press, 1972
45 x 18.5cm, orange silkscreen on shaped card with additional triangular card both spiral bound to create a stand-up paper sculpture that resembles a yacht with sails up. This is one of Finlay's most rare works only issued in 70 signed and numbered copies (there were blue versions of the work also). Co-designed with Ron Costley. This examplee has a very slight bend at the top else VG. Murray places this as a print but it is clearly closer to an object multiple and that is where we have catalogued it.

Fontainebleau: Musee Municipal Du Costume Militaire, 1972
10.5 x 15cm, 2pp typographic announcement card for a joint show with Jean Le Gac.
On the reverse is an important joint text by the artists which stresses the reasons why they were exhibiting in such a historic museum:

Our work is an attempt to find in the present the means to transmit and preserve the experience that we have of artistic activity: an intellectual journey, marked out by relics (photos, objects, fragments of texts ... 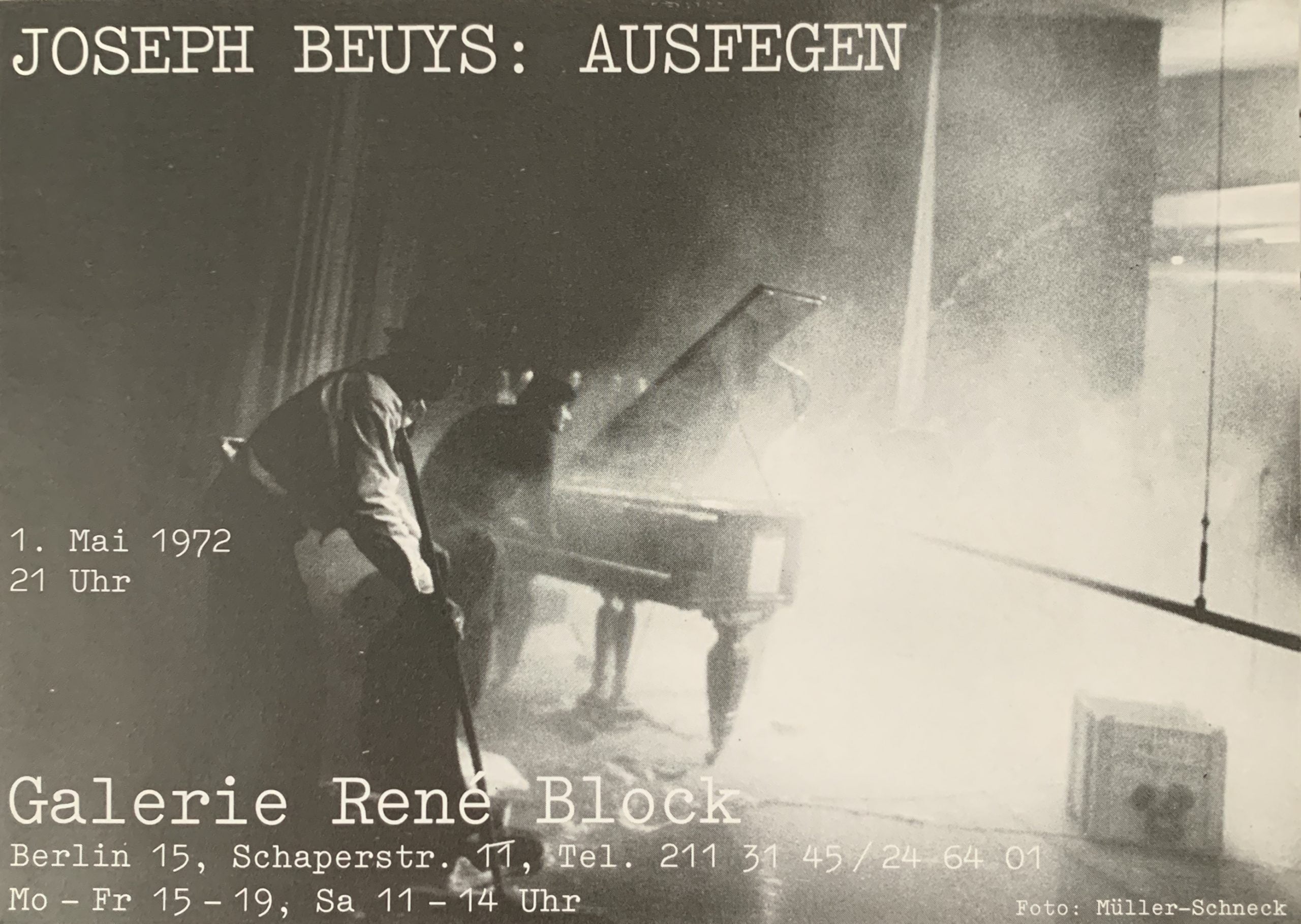 Berlin: Galerie Rene Block, 1972
10.5 x 15cm, 1pp announcement card for the exhibition that followed the Ausfegen (Sweeping Out) action where Beuys and students cleaned up the Karl-Marx Platza after the May Day march. The rubbish was bagged and taken to the gallery where they were placed on exhibition along with the brooms used in the Aktion. The card has a b/w image of an earlier action with Henning Christiansen taken by Muller-Schnuck. VG+.