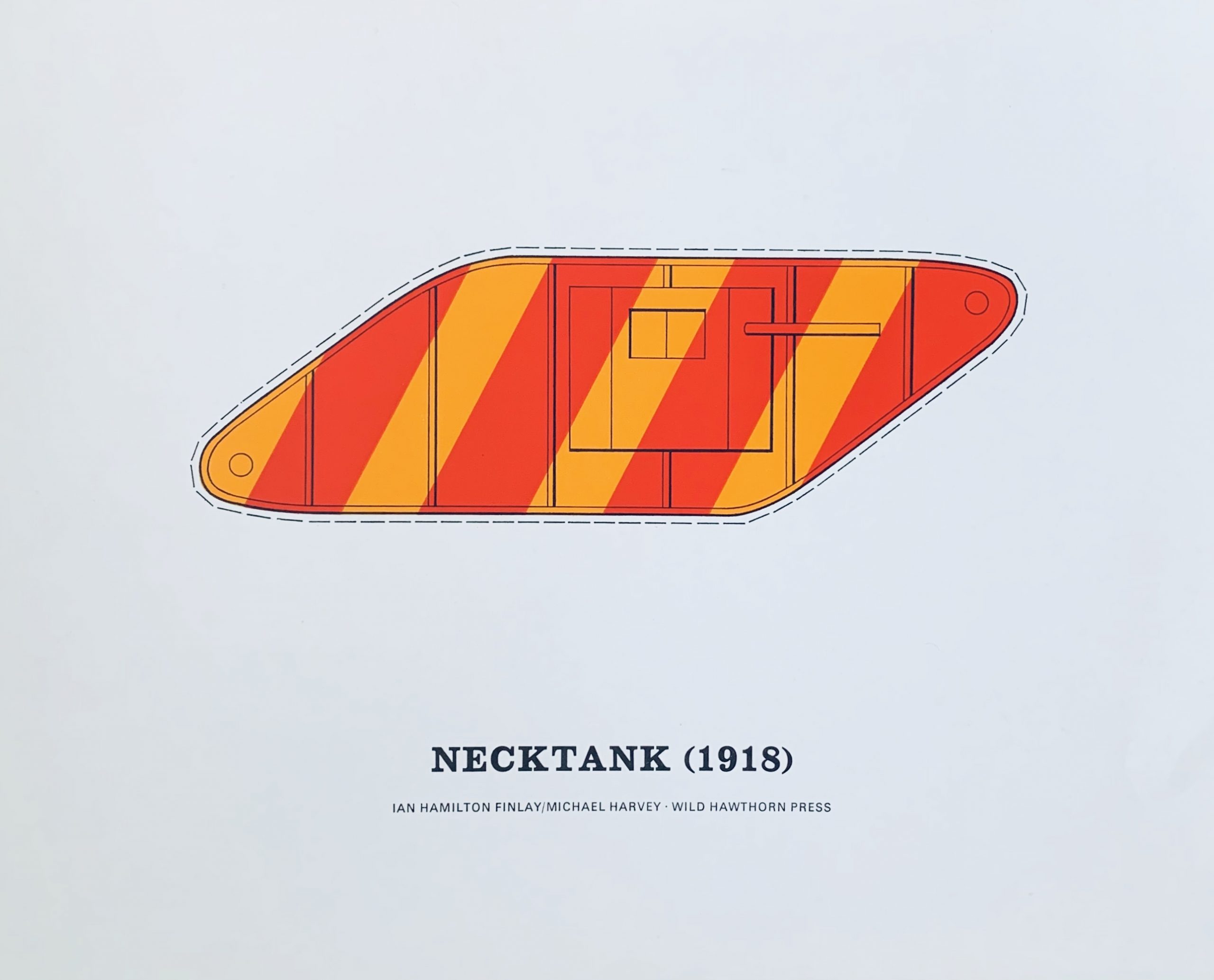 Dunsyre: Wild Hawthorn Press 1975
35.5 x 44cm, red, orange and black offset lithograph. A first world war tank is overprinted in bright stripes - which of course would have been impractical as disguise in war. What the image does mostly remind one of is a private school tie - and that is the point here, the class origins of the army leadership in the first world war was an important part of the British aspects of the conflict.
This print is, in many ways, a companion print to ACADIA - a camouflaged Second World War tank.
The drawing is by Michael Harvey.

Posted at 16:48h in Artist's Postcards

Dunsyre: Wild Hawthorn Press, 1973.
Three different cards - all 10.5 x 14.8cm, 2pp - each with a typographic design on the front with only the respective initials O.A.P.T./A.F.V.T./M.F.V.T and coloured backgrounds grey, mustard and blue. The initials stand for OLD AGE PENSIONERS TEA - and is allocated as for Simon Cutts, ARMOURED FIGHTING VEHICLE TEA and MOTOR FISHING VESSEL TEA both claimed for Finlay himself. A trio of related cards which are collectively designated by Finlay as "Tea-Cards" which recalls the small collectible cards found in tea packs as promotional items in the first half of the 20th century. One suspects a number of in-jokes between Finlay and Cutts are represented in these cards. VG+. 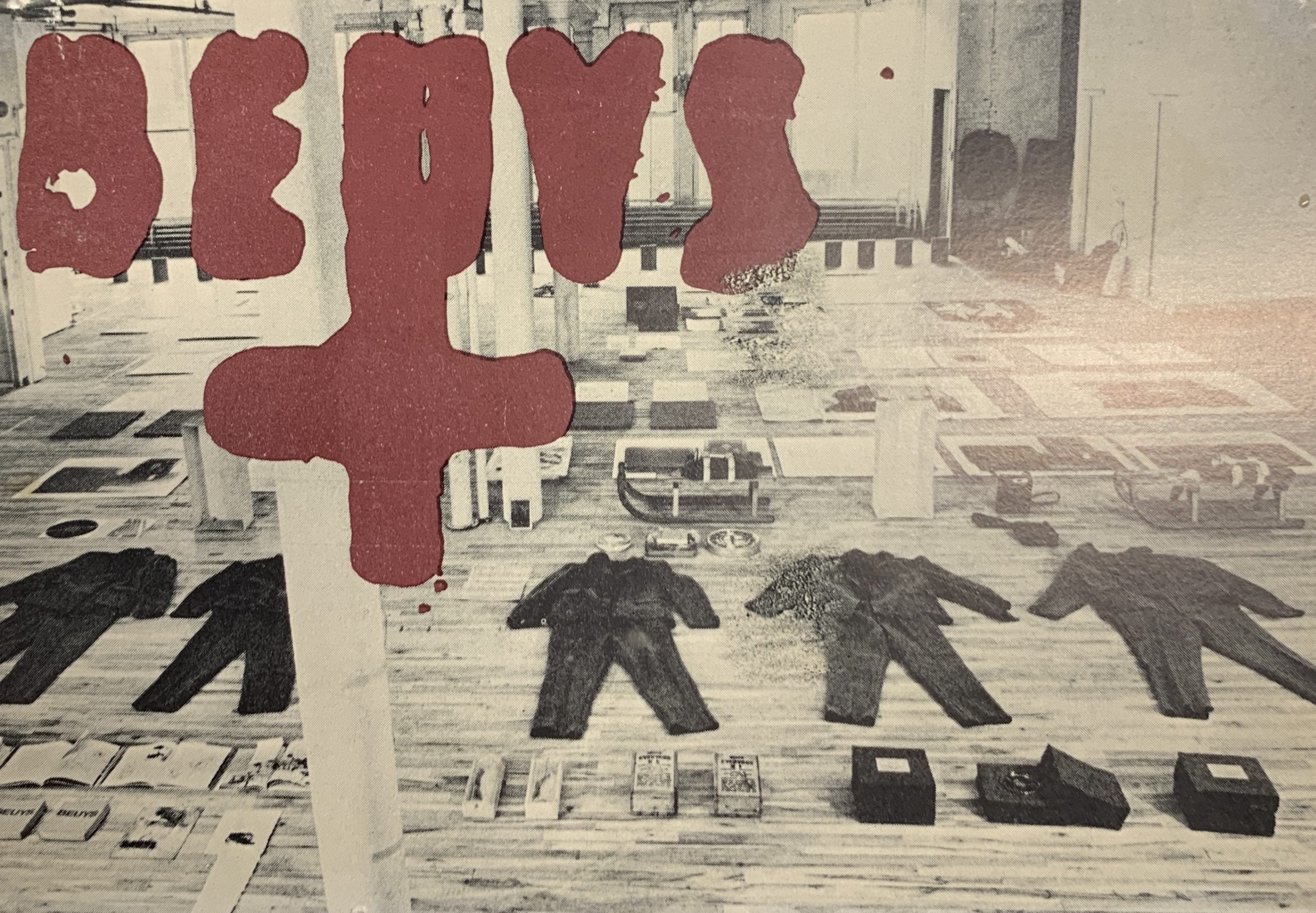 NYC: John Gibson, 1973
10.5 x 15cm, 2pp - announcement card with a reproduced photograph of many Beuys multiples and editions on the floor of the gallery overprinted with the artist's name in brown and verso gallery details. A mailed example in VG+ condition.

Little Sparta: Wild Hawthorn Press, 1973
16 × 26.5cm, printed white outer folder content of a 16 × 26.5cm offset lithograph with an additional sheet with a key to the drawing. Karl Torok created a drawing of a topiary landscape for Finlay and each element is identifies as a member of a land-owning extended family and its staff eg Gardner, Cook, Great-Uncle William, Mama, Emily & Rose. It may be that this is an actual family portrait of sorts or a metaphor for how elements of a formal garden might be seen as related to each other. What is noticeable is that the father/mother and children are in the centre of the work and the more distant family and staff tend to be found at the sides. VG+.

Paris: Gallery du Tournesol, 1973
24.5 x 17cm, 8pp artist's book printed black on cream card with four original lithographs of drawings with text by Romero and a short text "Manuel du Voyager" (travel diary) written by Jean Jacques Leveque.
Additional to that on the third page there is an original contribution by Boltanski which is relatively unknown - two photographs of a mother and father with a child and below is the text written by Boltanski (our translation):
"The two photographs must have been taken on the same day and almost in the same place. The little boy in the two pictures must be three or four years old, the sun is shining, the man and the woman look serious and sad, there are ceramic tiles on the steps and a large stone pot in which is planted a tree. The woman is young and beautiful, the man is dressed in white (he stands straight as if at attention). You think you can make out a house. in the picture on the right, the little boy seems to be singing.
Behind the photograph on the left is written in pencil "with my father Seville 1934", behind the one on the right "with my mother Sevilla 1934"
For Juan Romero and his parents whose names I don't know. Christian Boltanski, Mai 1972."

It is not clear if these photographs are really of Romerpo and his parents or a fiction. Romero was a friend of Boltanski's who had organised exhibitions by the former at the same gallery when Boltanski was the director (it was founded by his mother). This contribution is not mentioned in any catalogue raisonne that we know of and is relatively forgotten.
BR>...