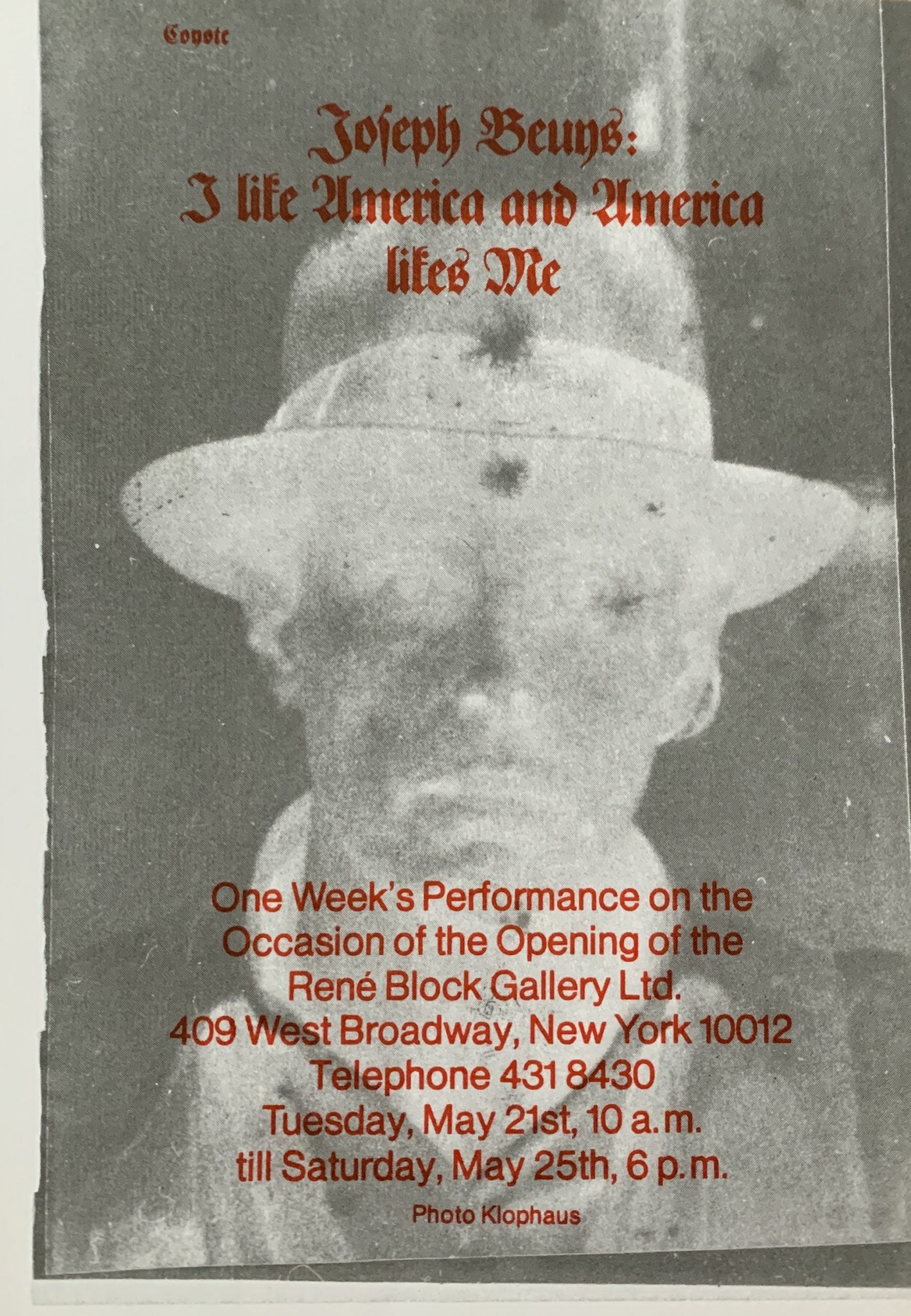 NYC: Rene Block Gallery, n.d. (1974)
15.2 x 11cm, 1pp. Announcement on thin card for the inaugural exhibition at the gallery in New York and one of Beuys most famous performances where on leafing the aircraft he was wrapped in felt and taken to the gallery on a gurney in an ambulance. In the gallery he lived with a coyote in a space along with copies of the Wall Street Journal, straw, felt and his crook. He spent eight hours a day in the space interacting with the wild animal before being taken back to the airport by the same method. One portrait of the artist by Ute Klophais in negative under text. An important event in the history of art. VG+.

Paris: Editions Georges Fall, 1974
22 x 16cm, 16pp (self cover). Artist's book which show objects from Annette Messager's first communion along with three photographs of a young girl (not Messager) preparing for the ceremony. The images are "representational" of the various objects and not the actual items used in Boltanski's partner's life. Each has an objective description below as if in a historical journal. Staples are a bit rusty else VG+. Scarce.

Krefeld: Museum Haus Lange, 1974
12 x 22.5cm, 2pp announcement card for a show of drawings from Beuys' earliest period. One drawing - "Tierfrau un Tier" from 1956 - is reproduced in b/w on the back of the card. VG+ although two punched holes for storage. 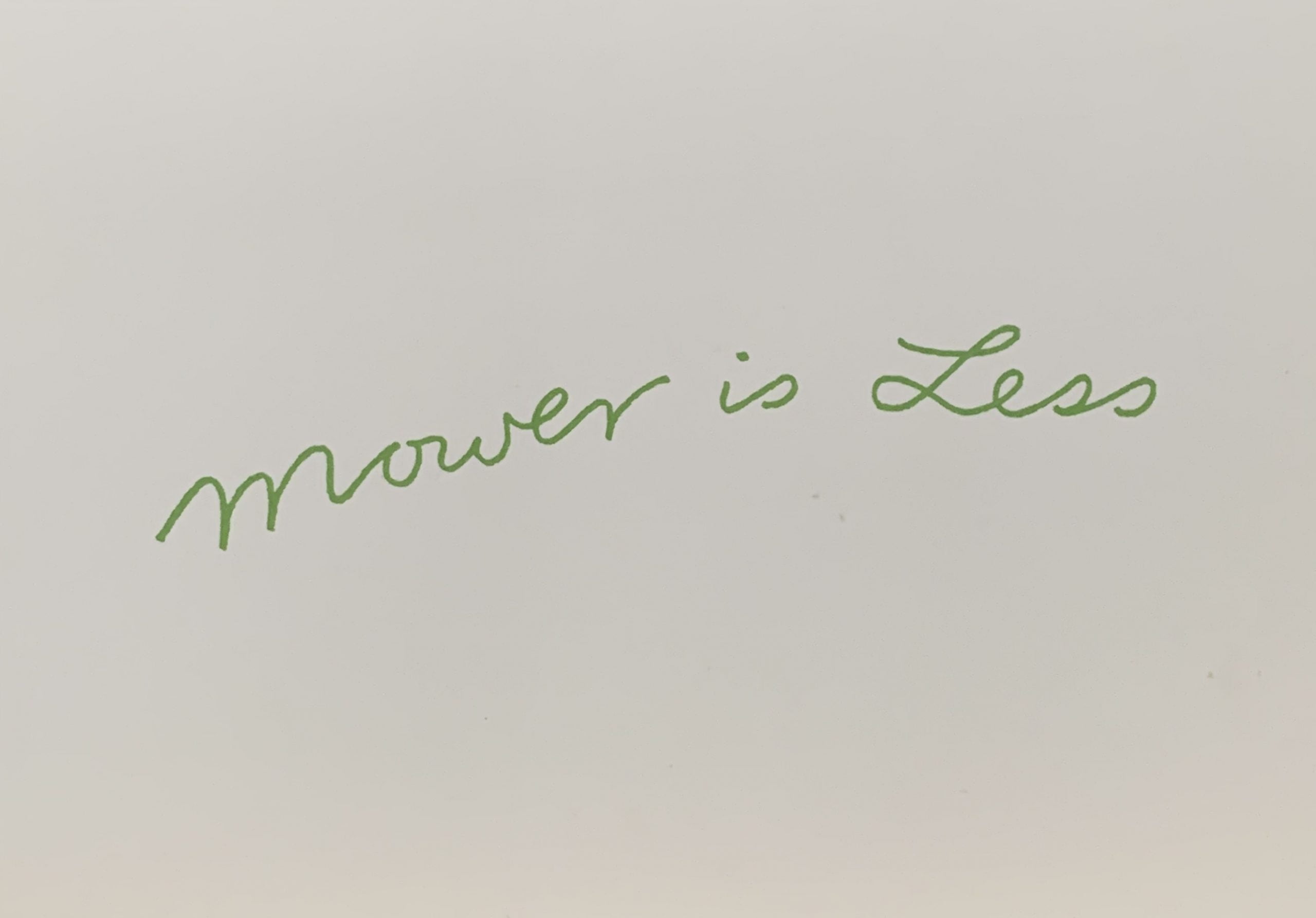 Posted at 15:49h in Artist's Postcards

Dunsyre: Wild Hawthorn Press, 1973.
10.5 x 15cm, 2pp. A card which has the title text in green on white in a cursive font. A simple pun about cutting grass is also a comment on minimalism - of which this card is an example. VG+.

Dudweiler: Edition A.Q., 1974.
20.9 x 14.8cm, 32pp plus card covers with printed tipped on title label. First edition of this artist's book which again has photographic images of Boltanski dressed in suit and hat miming various methods of suicide - hanging, cutting one's throat or arms, drownings which all are shown in a second photograph to be fake - the knife is plastic, the drowning with a brick around the neck is only in a bowl of water, the hanging is from a rope that is not attached at either end.
However the last image of suicide is of the artist shooting himself in the head with a gun. That photograph has no associated proof of "fake" image so one may well assume the joke is on Boltanski himself as it was not fake, and he has in fact died.
This edition was printed in only 150 copies with 20 "du tete" copies and is very hard to find indeed. This copy is in VG+ condition although the label is slightly marked by the glue coming though the cheap paper. Reference: Flay Boltanski Catalogue Page 112. 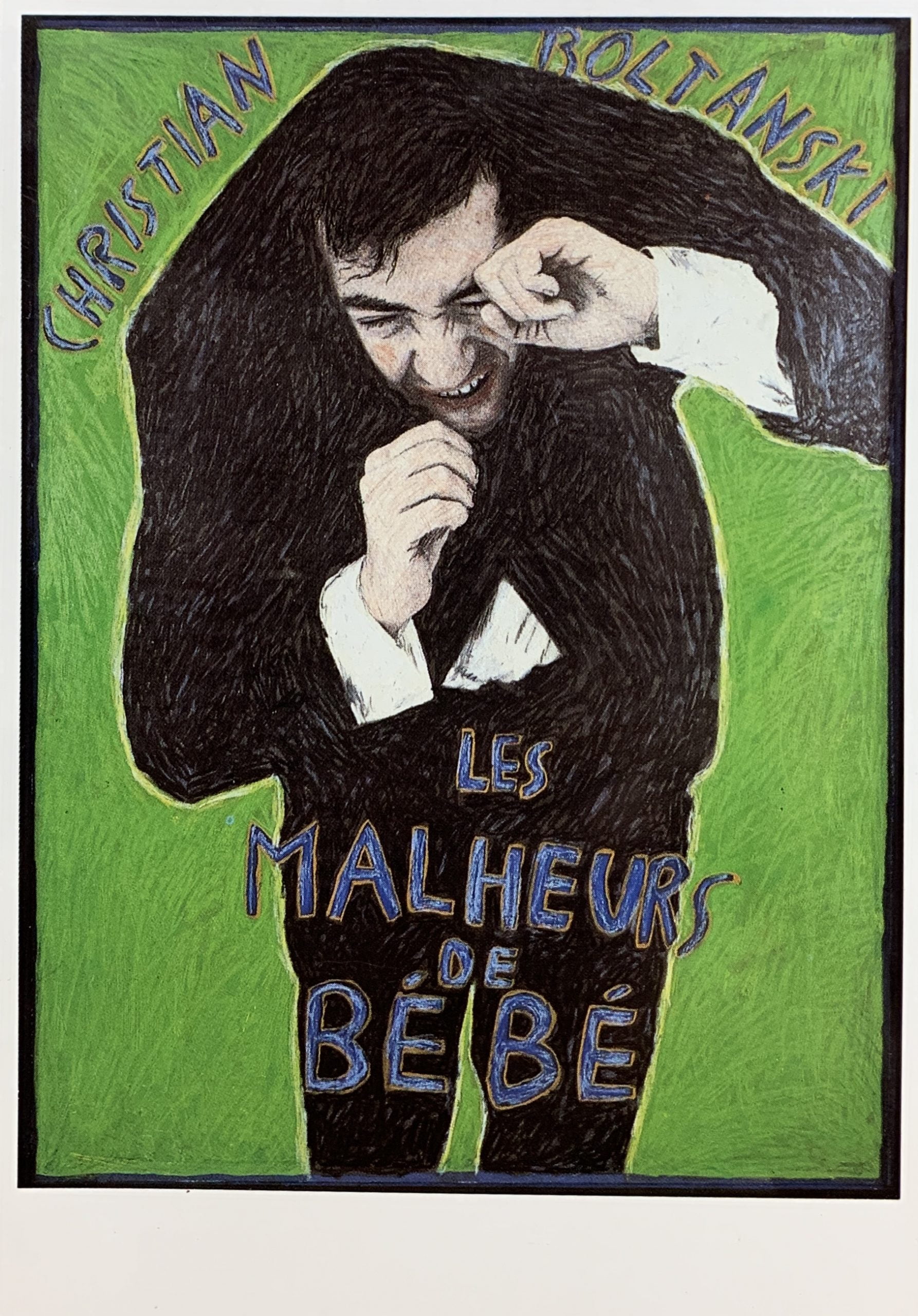 Dunsyre: Wild Hawthorn Press, 1974
29.6 x 12.8cm, 8pp plus card covers and dustjacket. Artist's book which has 8 silhouettes of boats or landscapes drawn by Laurie Clark. Each image has a two-part description underneath - such as HUSH-HUSH CRAFT - Vosper. Vosper according to Finlay was a service launch ie an open boat. The dj here has some spotting but else this is VG+.