Posted at 15:58h in Artist's Postcards

Dunsyre: Wild Hawthorn Press, 1974.
12.7 x 77cm, 8pp. Artist card which opens out to show a calligraphic design using the German word for ship (Schiff) which is printed black and blue in reflection to give the impression of a boat on water (with the fold being the water level). A lovely graphic by Ron Costley who was one of Britain's greatest typographers and one of Finlay's longest lasting collaborators. One of 350 signed and numbered copies. VG+. 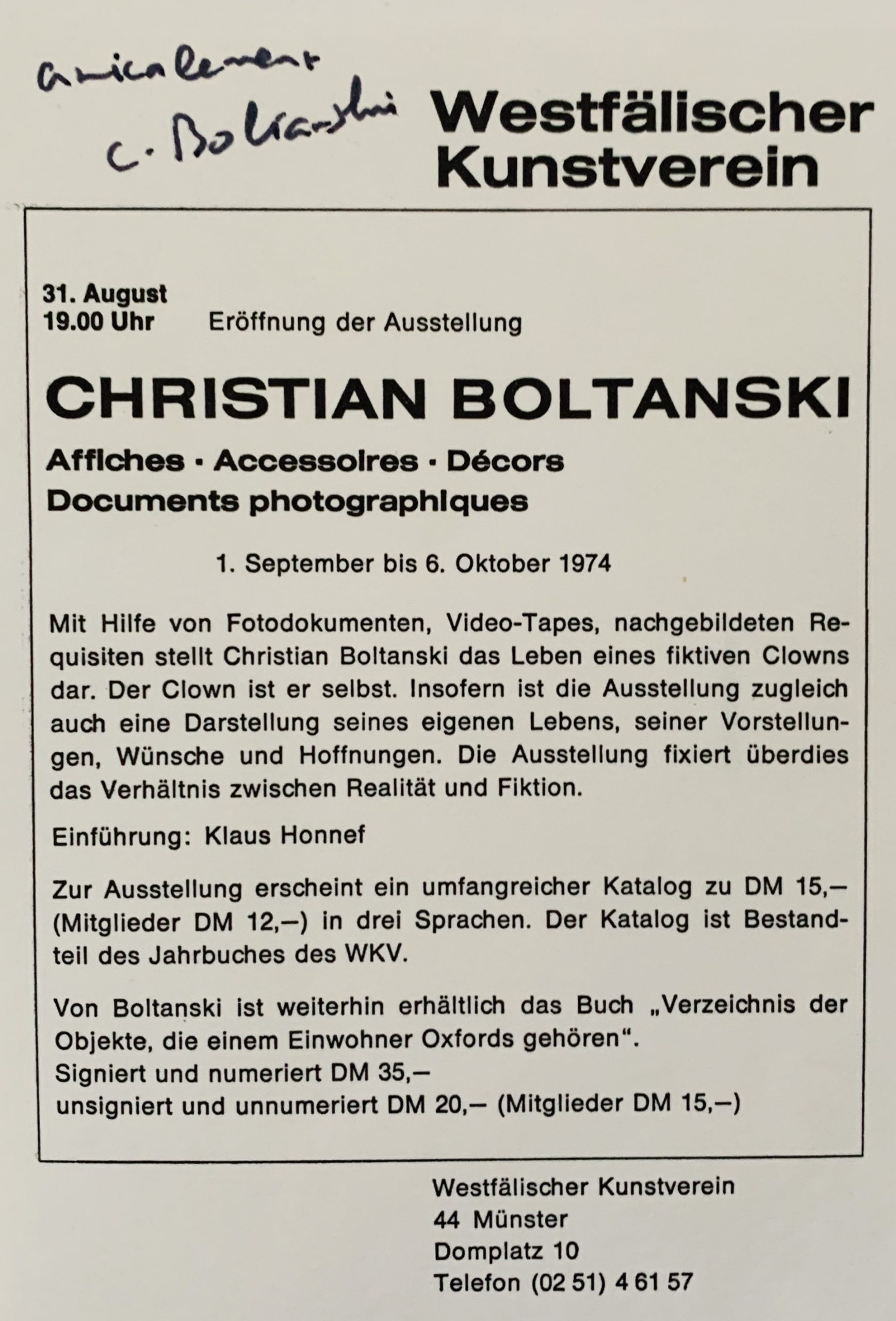 Munster: Westfälischer Kunstverein, 1974
15 x 10.5cm, 1pp typographic announcement card for a major museum show of posters, photographs and other works. This was one of the artist's earliest museum shows (although compared with other artists Boltanki was pretty successful in this regard with an exhibition in the ARC in Paris in 1970 which was his 5th ever solo show!). The card mentions more recent work bhy the artist where he plays a "clown".
The card is signed by Boltanski (to M. Berg) in black ink.
JOINT:
Hand addressed (by Boltanski) envelope to M. Berg with franked printed stamping.

Posted at 09:43h in LETTERS AND DOCUMENTS

N.p. (Copenhague): Berg, 28 Aout 1974
29 x 21cm, original vintage carbon copy of a signed letter from M. Berg to Boltanski.
The letter says that Berg cannot come to Paris soon and that he has good memories of a meeting in Copenhagen with Boltanski and Annette Messager and the discussions about Messager's artist's book he was shown.
Berg mentions the clipping from the newspaper he sent before and a new clipping (see elsewhere in this collection) about the artist and he discussed Boltanski's development as an artist with his friend John Hunov. The conclusion of that discussion was that Hunov and Berg request to commission a book from Boltanski for publication by Berg Verlag and by the Galerie Daner.
Berg explains that he is in Copenhagen for the whole of September and that would be a good time for reflection and (one presume's) completion of such a project. 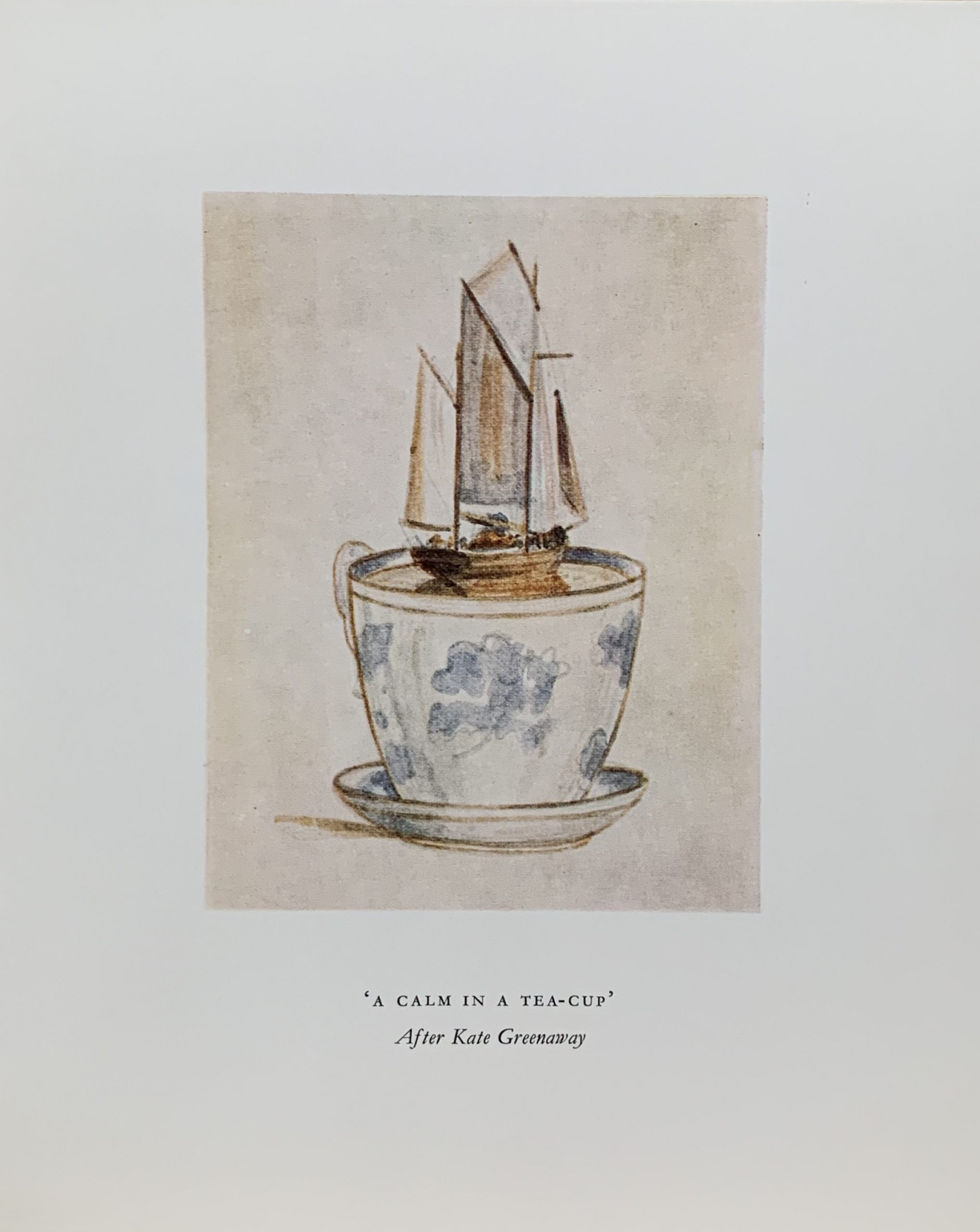 Posted at 16:05h in Artist's Postcards

Dunsyre: Wild Hawthorn Press, 1973.
16.5 x 13.5cm, 4pp. Artist card which shows a painting by Richard Demarco after a well known and loved slightly kitsch painting by Kate Greenaway of the same title that shows two young women cavorting in a tea cup. Finlay has had Demarco replace the women with a sailing boat (a calm). The Greenaway is a joke based on the saying "storm in a tea cup". This is a hugely popular card by Finlay which appeals to many who have no idea of any other work by the poet. VG+.
BR>...

Paris: Centre national d'art contemporaine, 1974
21 x 14cm, 48pp plus original wrappers. Artist's book which displays 310 b/w images of the claimed belongings of a young woman in Bois-Colombes (a suburb of Paris). The third of a number such artist's books surveying everything owned by an anonymous woman.
on this occasion it is known that some of the objects were those of both Boltanski's parents and Annette Messager's mothers - a fact that is not admitted in the book. This indicates that one might not quite trust the other similar books in their veracity about attribution.
In a foreword Boltanski notes that the project's past history with him writing to museums offering the project. VG+.
Reference Flay Boltanski Catalogue Page 106.
BR>....

Paris: Chorus, n.d. (1974)
24 X 18cm, 128pp plus pictorial covers. A single number of the art journal which alongside Boltanski are original contributions and articles on Annette Messager, Jacques Donguy, Jacques Monory and others.
Notable here are six pages by Boltanski which repeats his project displaying the supposed belongings of an anonymous person - here supposedly some living in Oxford, UK where the first exhibition of such an accumulation took place in 1973. VG+. Scarce publication.
Following Boltanski's contribution is a poem by Pierre Tilman entitled "Boltanski est" and after that Annette Messager has an original contrbution called "Quelque attitudes de femme extraites de quelques albums - collections par Annette Messager collectionneuse." which displays various found image of crying and fearful women, kissing couples, some cosmetic processes and cooking. There is a second prose poem by Tulman in his facsimile hand entitled "Annette, Christian, Jacques" as frontispiece which has a painting which shows Messager and a young somewhat handsome Boltanski. hugging.

Dunsyre: Wild Hawthorn Press, 1974
25.5 x 10.5cm, 12pp plus card covers and printed dustjacket. Artist's book after Robert Lax's style and typography - each page has a group of descending words (often hyphenated) - in order RICHT-HOFEN (in red) /REIN-HART (in black)/CRIM-SON/BLACK/then RICHT-HOFEN and REIN-HART then CRIM-SON and BLACK - the colours reflect the nickname of the Red Baron, and the minimalist black paintings of Reinhart, The combinations of the words changes the meaning of each page as subtle alterations to the word order infers new imagined images.
One the 5th page Finlay has noted that this proof has missed out a hyphen and he has written on that page thus, On the last colophon page has the word Proof written by Finlay in blue ink and the page is signed. VG+. An unique copy.