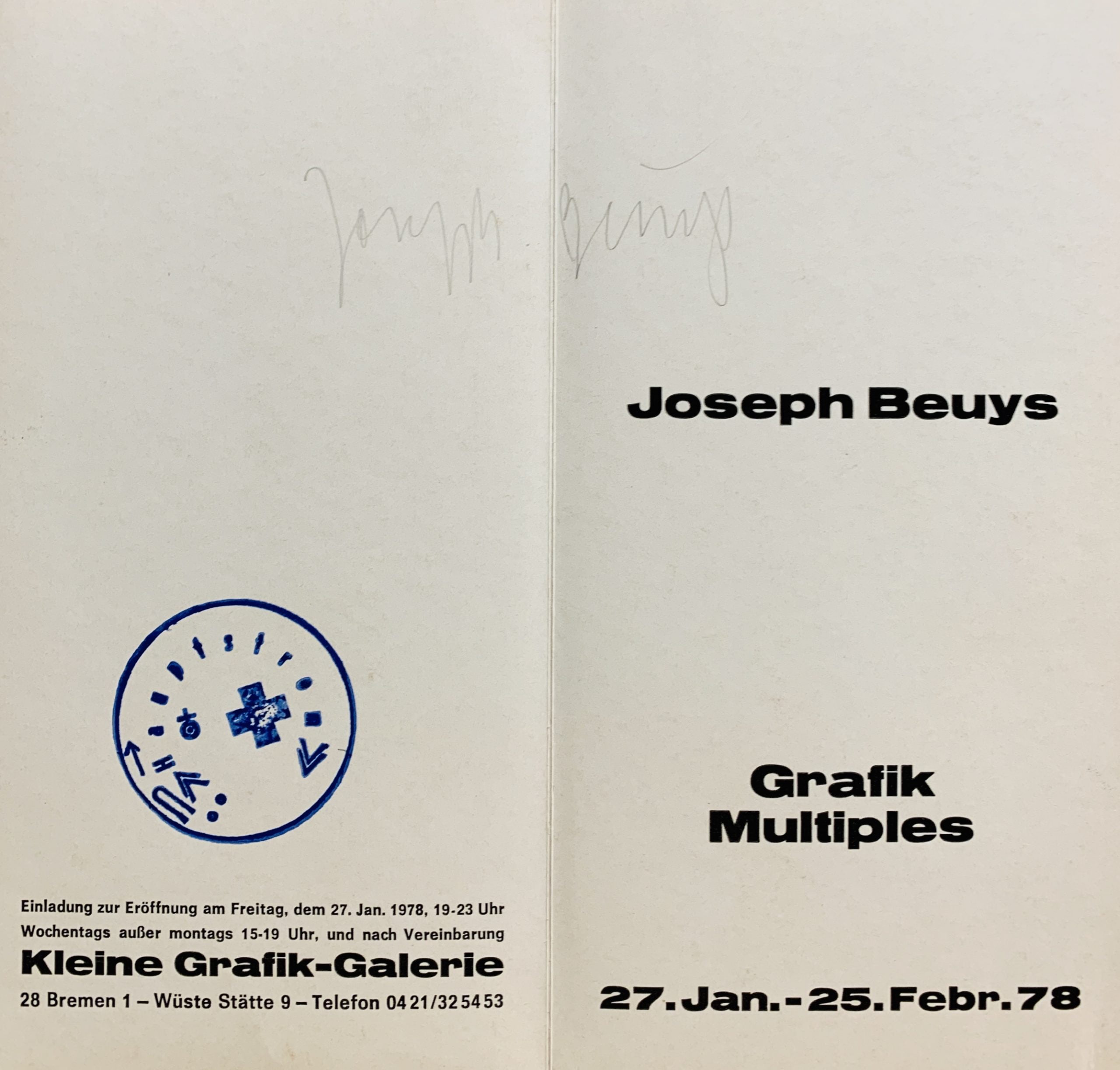 Bremen: Kleine Grafik-Galerie, 1978
20 x 10.7cm, 4pp (but printed recto on outside only). Typographic announcement card for a show of lithographs and object multiples. Beuys has signed this card in pencil and also stamped it in blue with the Haupstrom symbol. VG+.

Braunschweig: Kunstverein Braunschweig, 1978
10.5 x 21cm, 2pp announcement card with a work reproduced on the front (a half cross in felt which Beuys in actions often made complete by adding a further half-cross in different materials)). On the reverse museum details. VG+.

Karlsruhe : Badischer Kunstverein, 1978
26 x 22 x 2cm, two part black conservation box content of a 24 x 19.5cm, 124pp plus boards and dust jacket. The deluxe version of the exhibition catalogue for a solo show of mostly photography. Texts in German by Andreas Franzke and Michael Schwartz. Later sections include re-printings of various of the artist's previous exhibition works and images from artist's books including Reconstitutions de Gestes Effectues par Christian Boltanski, L'album Photographes de la familie D., Les Habits de Francoise C., Les 62 Membres du Club Mickey en 1955,the Inventaire des objets appartenant a un jeune homme d'Oxford, Descriptions des 20 Regles et techniques utilisee en 1972 par un enfant de 9 ans, Les Images Modeles, Les compositions fleuries, and Les Compositions Photographiques and other images of the artist's "comic" performances of the 70s.
This deluxe copy of the book comes with two original editioned photographs by Boltanski - the first three original passport style b/w photographs of the artist taken on the dates - 5 September 1965 (the day before the artist's birthday), 27 November 1970 and 28 January 1978. The dates are written in the artist's hand on the gridded 24.5 x 20.5cm, 4pp card under the tipped on images.
Inside the card is a second photographic print - here in colour - of a set of children's plastic toys that resemble worker's tools. The card is signed and numbered on the back of the card as "VI" in pencil by Boltanski with a rubber stamp impression. The last page of the hardback catalogue is also signed and numbered "VI" in pencil by the artist. There were only 20 such deluxe copies issued during the exhibition. ALl are VG+ in like box. Reference: Flay Boltanski Catalogue Page 146.