N.p.(Edinburgh): Robert Matthew, Johnson-Marshall and Partners, 1978
21 x 30cm, 43pp plus printed glossy covers. A set of proposals by Finlay for architectural and sculptural interventions in the Peterhead Power Station which was to be build. The book was published by the architects as part of the proposals for the site. The drawings by Ian Appleton are given very clear explanations by Finlay - proposed are a wall of glass floats, four stones with carves words indicating the theoretical structure of classical and other universes in fours (suits of cards, directions, elements, primary colours), a maze made out of fishermen's nets (which we would dearly like to see realised), a large stone carving of the SEA'S WAVES'S SHEAVES (which was installed elsewhere eventually), a concrete poem TERRA/MARE to be carved in Caithness Stone, various inscriptions of natural boulders (including SEApink) to be placed on site which remind one of the later PEBBLES series of works, a sundial with the inscriptions Rete Luci Tentu/A Net for the Light, names of fishing boats carved into garden slabs, a large sculpture of a bronze oar placed on a hill far away from the station which would visually reflect the chimney of the newly built station and also be a sort of sundial gnomon along with a site layout which shows the various shadows cast by the oar on the landscape at different times, a large rock with "It's Scotland's Atlantis" carved on it (with the word oil crossed out) an unusually political work by Finlay, and, finally, a carved oar into the face of a heap of sawn boulders (referencing `Ullysses).
To the best of our knowledge none were actualised. The sheer number of wonderful ideas proffered by Finlay for this project is quite astonishing.
This is a wonderful book although the style of the architectural drawings are strange for a Finlay collaboration - one suspects he did not choose the artist.
Murray places this book in amongst other artist's books by Finlay but we have recategorised it as a "proposal" as it clearly is just that and because of the style of the book it does not feel or look like a Finlay publication. This is a rarity and very hard to find. VG+.

Posted at 15:58h in Artist's Postcards

Dunsyre: Wild Hawthorn Press, 1978
8 x 16.6cm, 2pp. A card with two abstract drawings by Jim Downie - one representing the romantic interest of Wordsworth (trees) and the other the Dazzle form of camouflage invented by Edward Wadsworth to help defend ships at sea. Finlay clearly enjoys the slight change in spelling between the names and the resulting hard edge vs organic images. VG+. 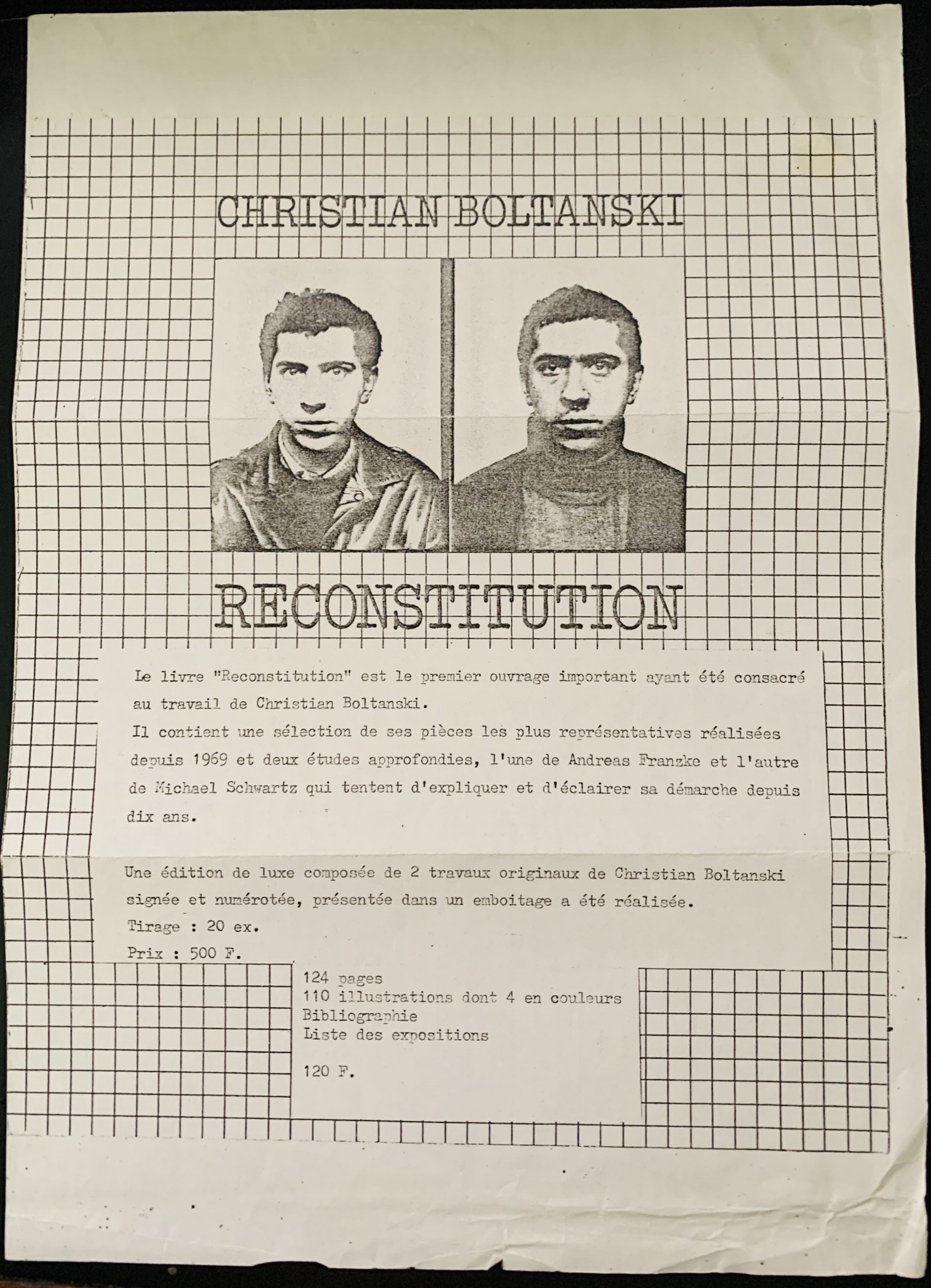 Paris: Editions du Chene, n.d. (1978)
30 x 21cm, 2pp, b/w offset for the first of Boltanski's "reconstitution" artist's books which reprinted a number of earlier works made since 1969 and with two essays by Andreas Franze and Michael Schwartz. Also notes the deluxe version of the book which is signed and numbered with an original work included from an edition of 20 copies. Slight paper damage to the bottom of the leaflet elss VG. Scarce ephemera.