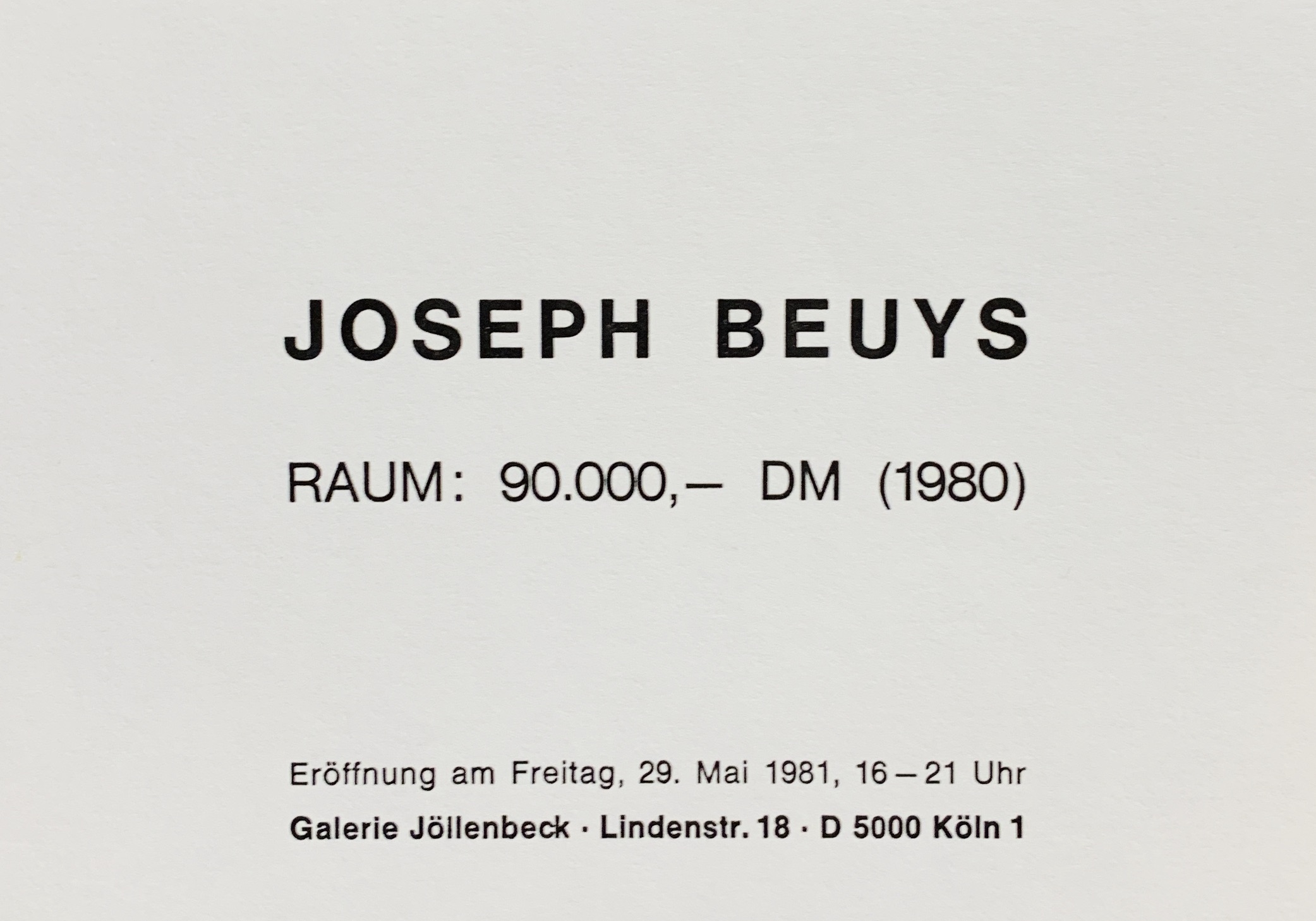 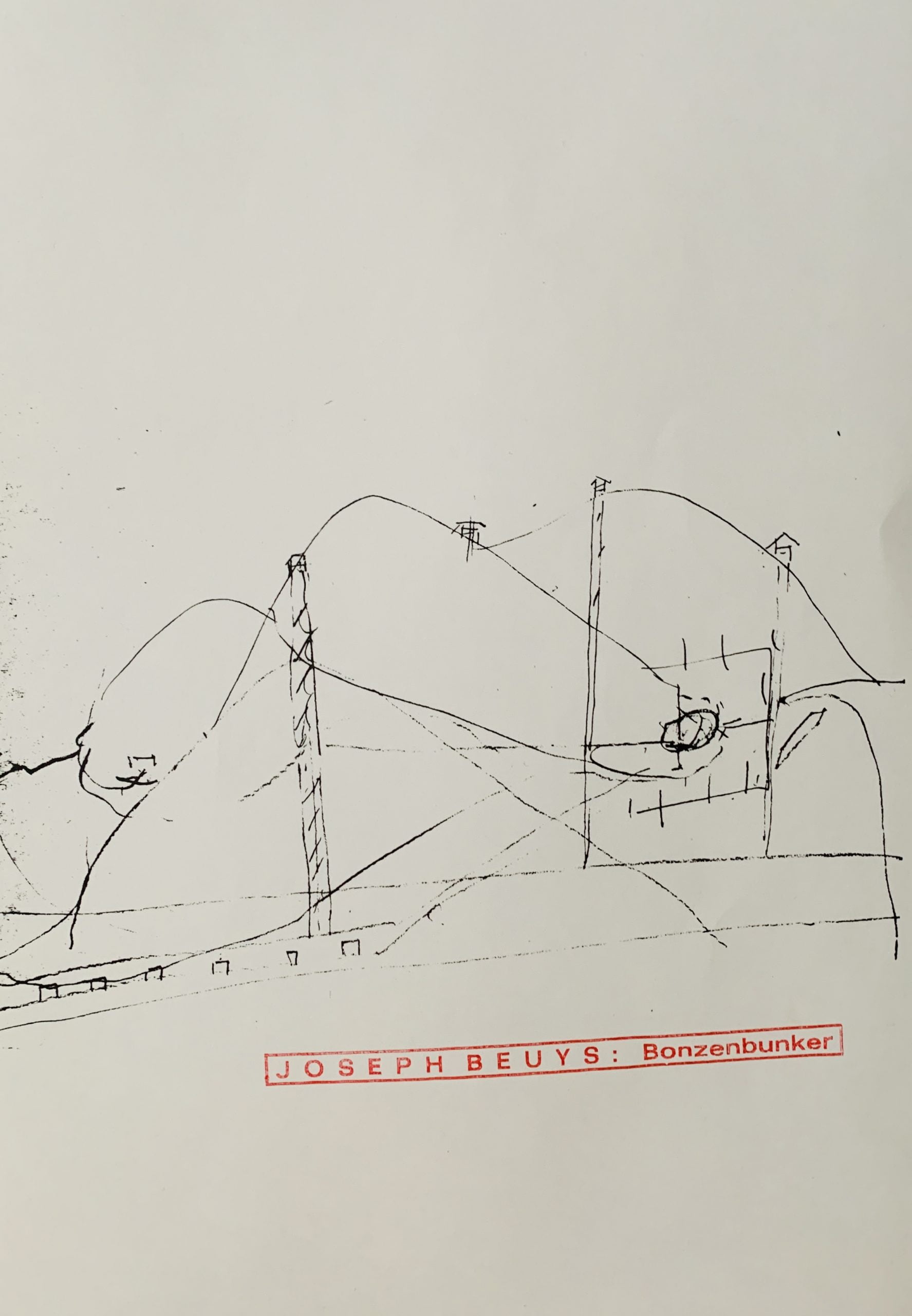 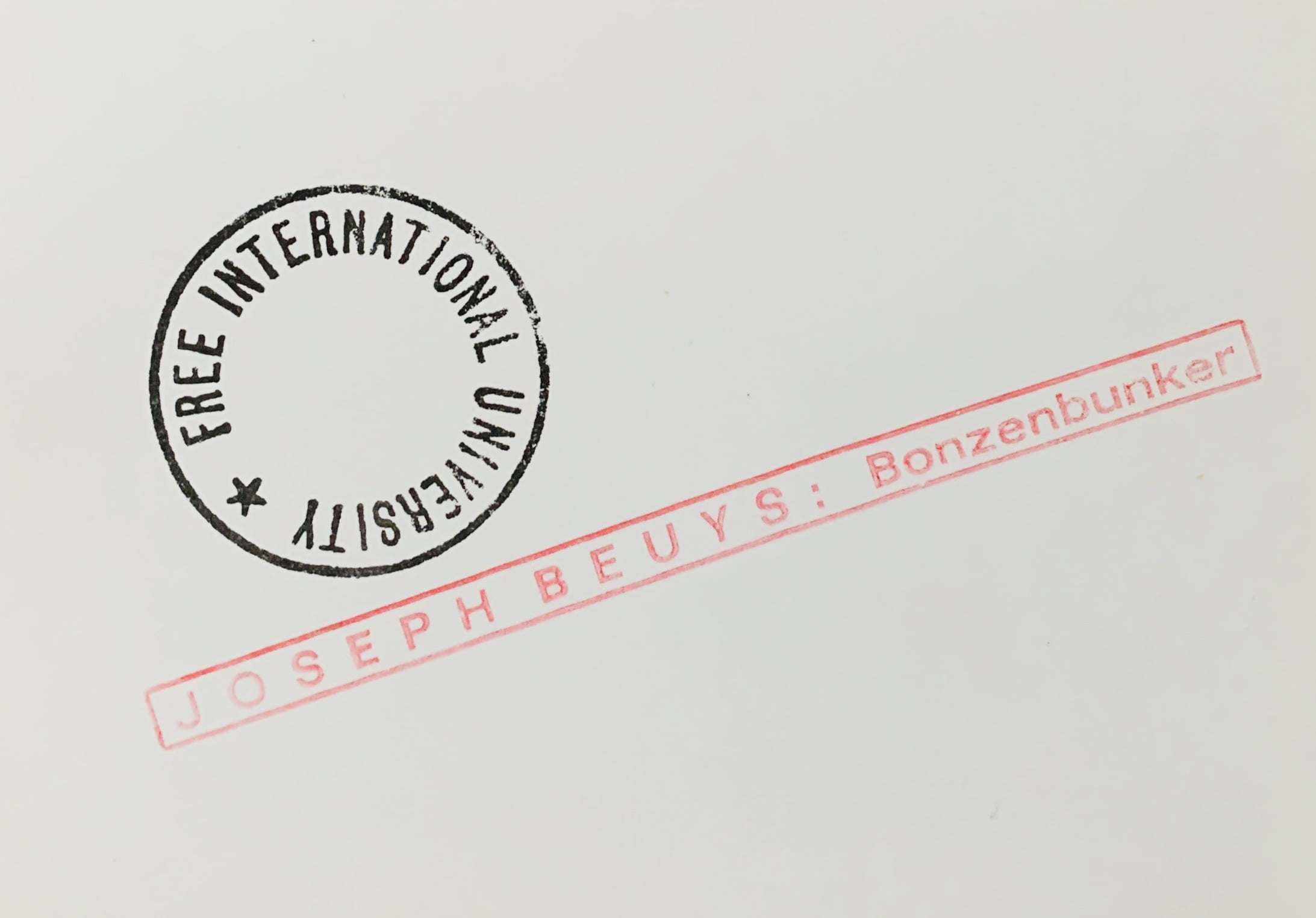 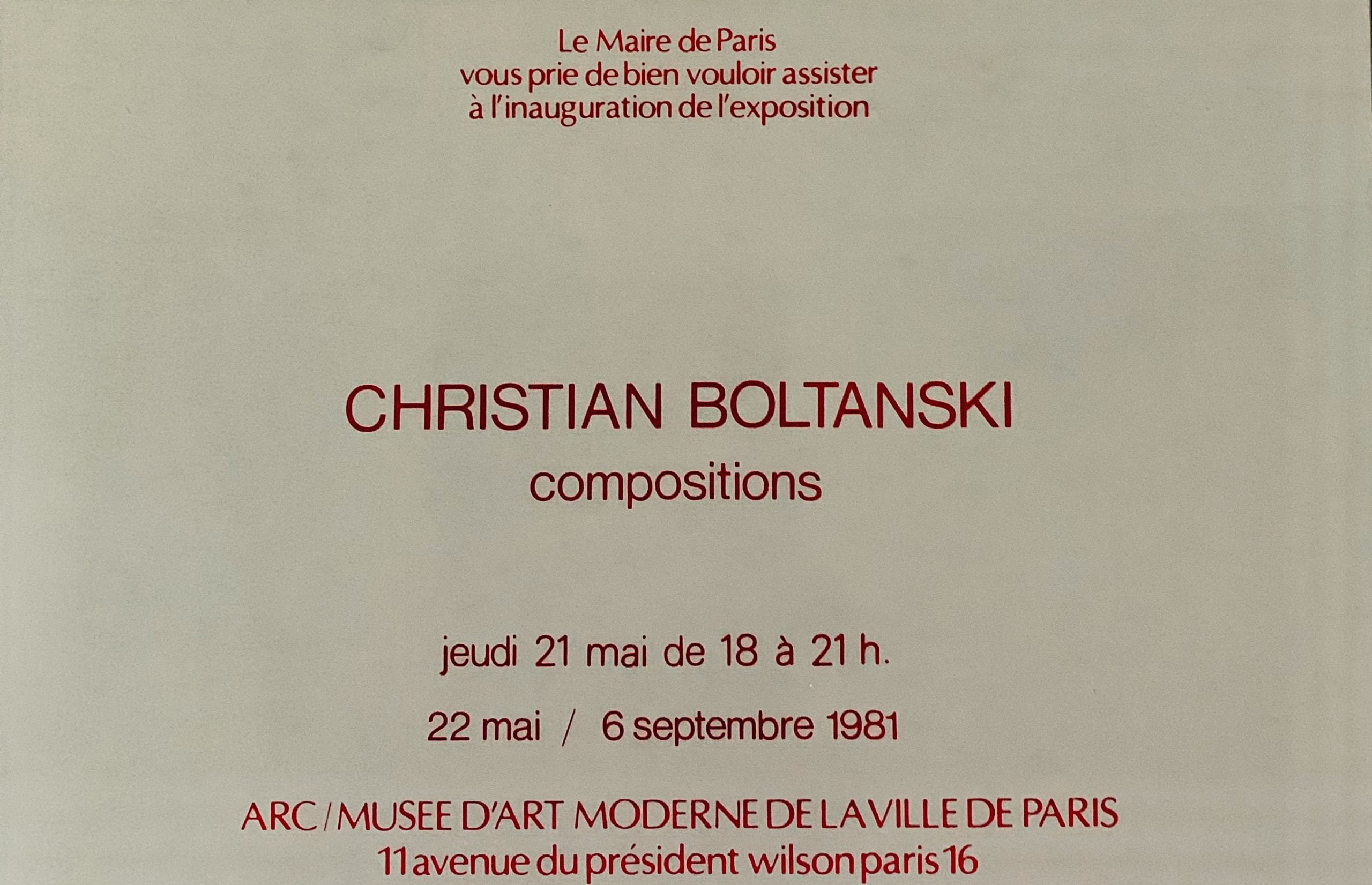 21 May COMPOSITIONS. 1981. WITH HAND ADDRESSED ENVELOPE.

Little Sparta: Wild Hawthorn Press, 1981.
24.8 × 30.5cm, 32pp plus pictorial card covers. A somewhat rare artist's book which has eight full colour lithographs of water colour paintings of poppies by Ian Gardner on thick paper bound in with titles by Finlay. A rather lovely book the theme is similar to other books where German Panzer tanks are well camouflaged in nature. Here the camouflage is perfect - one cannot see the tanks at all. In a suppliment bound in at the back - Finlay has added numberous epigrams relating to tanks and camouflage.

This is one of only 200 copies signed by both Finlay and Gardner on the last page.VG+. 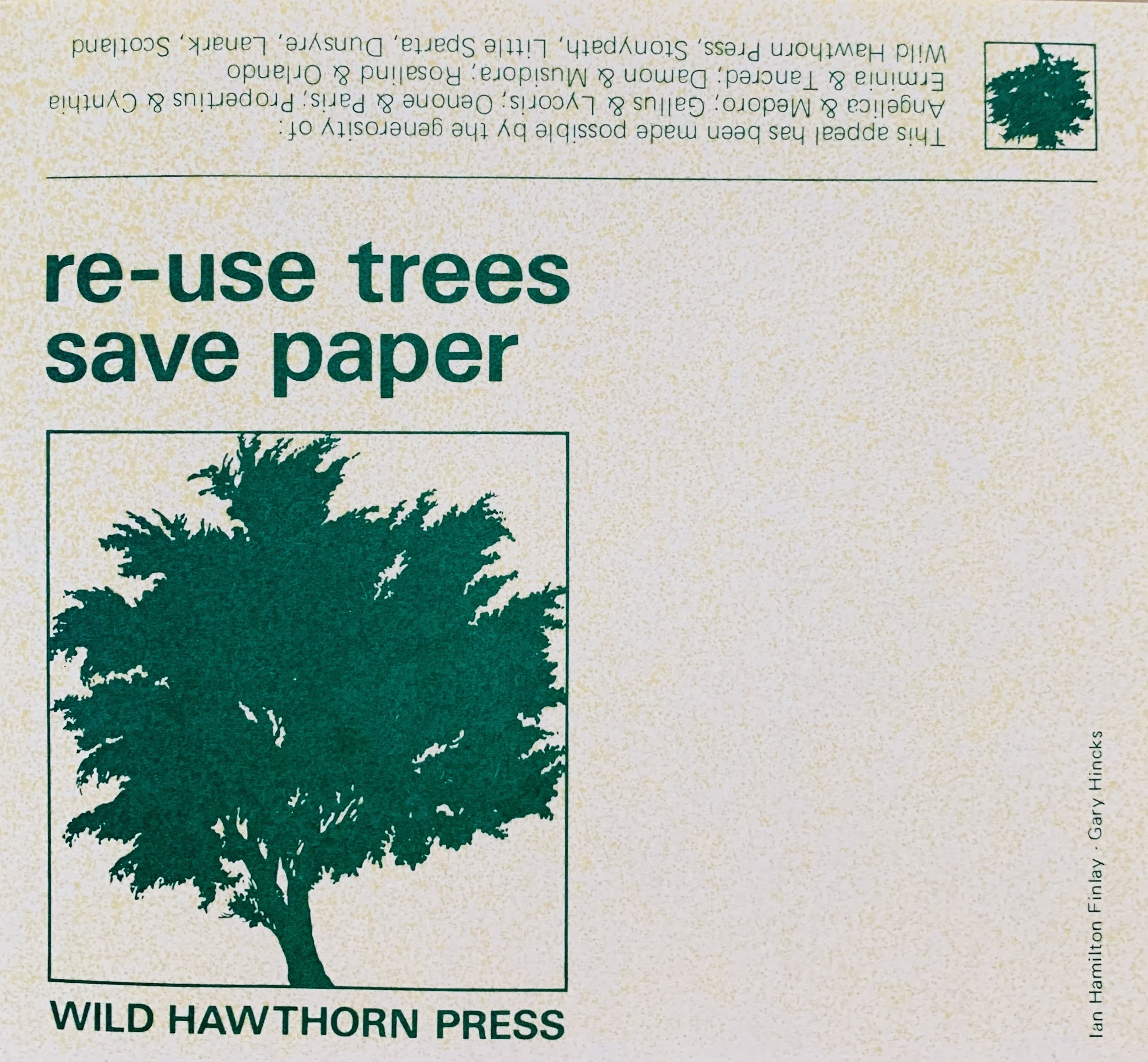 Little Sparta: Wild Hawthorn Press, 1981 13.5 x 14cm, green on white adhesive label with a reworking of the more common : "Save trees/recycle paper" but with an even more ecologically sound message. Slight spotting to the paper else VG. Murray has this as 7.23. ... 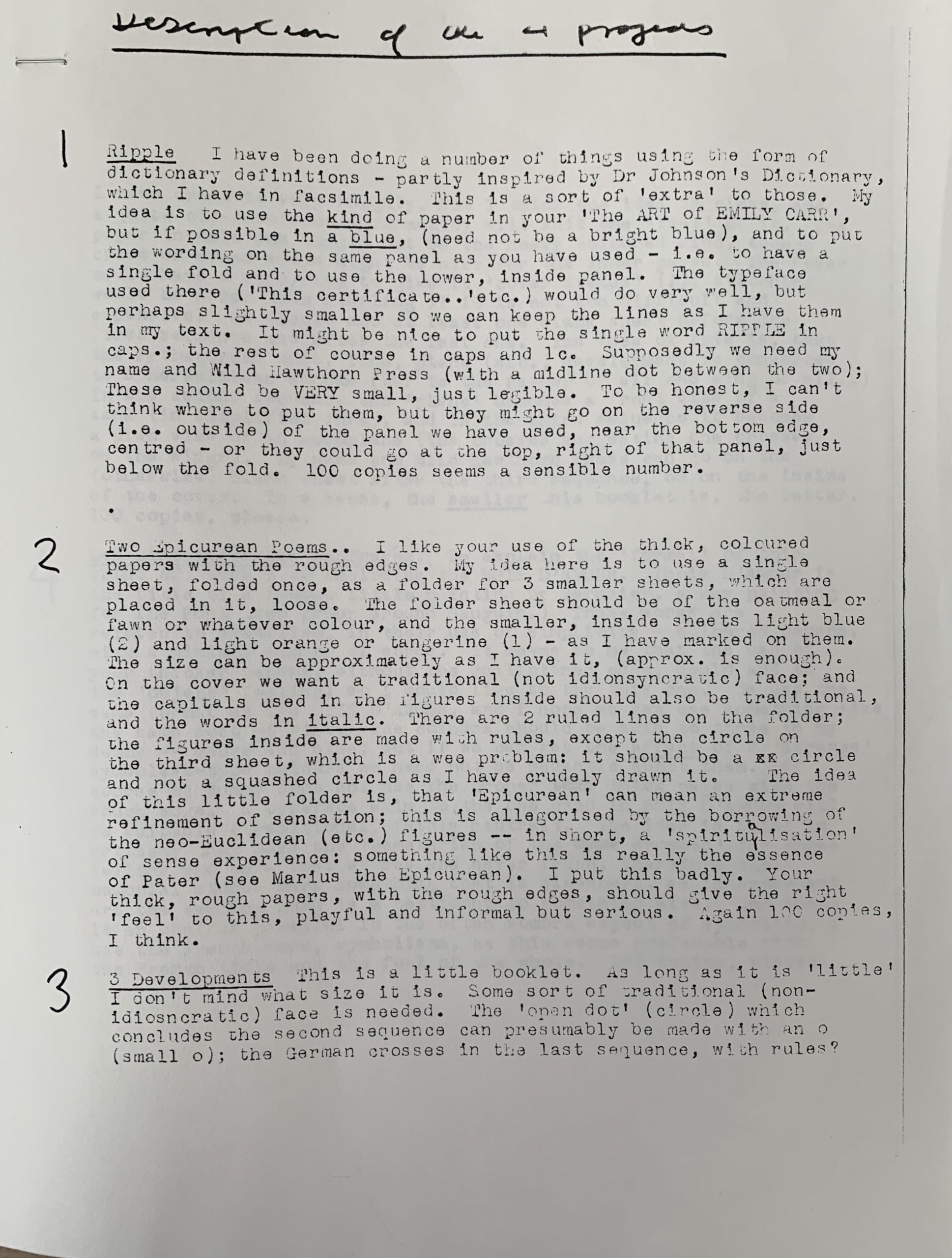 19 May DESCRIPTION OF THE WORK IN PROGRESS. c. 1981. AN IMPORTANT INSIGHT INTO FINLAY’S PRODUCTION PROCESS.

Little Sparta: Finlay, n.d. (c. 1981) Two original xerox stapled sheets of a letter both 30 x 21cm, 1pp. A long and important letter from Finlay to a collaborator in which he details the thinking behind various works and booklets.
Four different sections all deal with different publications Finlay is working on.
The first RIPPLE - discusses a publication which is a single sheet but where the choice of paper and colour is an important part of the work. The text would be minimal based on design of Dr Johnson's Dictionary.
The second is TWO EPICURIAN POEMS - where first Finlay discusses the choice of paper and binding and printing for the book but then goes on to explain that "epicurian" can mean an "extreme refinement of sensation" so the choice of thick rough papers reflects that emphasis on feeling.
The next section deals with 3 DEVELOPMENTS - another small planned booklet. After describing how he would like some of the typography set, Finlay then turns to the choice of paper again. Finlay notes the placing of blank pages to split sections up is important and then explains two distinct sections within the concept are respectively a development of the drawings in a Pythagorean way and then a Heraclitean evolution. The third section is not discussed.
The final work discussed is LES CIMETIERES DE NAUFRAGES and notes its relationship to Symbolism (along with an earlier "print" called Bois D'Amour which he had added to the letter) . Again the choice of paper and typography is to the fore in the discussion. The colour choice of mauve and blue Finlay regards as similar to that of Symbolist paintings . Finlay explains that the cemeteries found in Brittany for sailors lost at sea represent for him a symbol of something gone and missing and unable to be rescued or found - and that Symbolist art is as that also. He then says that the choice of the title being in French "seems preferable".
This letter does not indicate who it was sent to but we can surmise a printer or typographer collaborator. What the letter does show is the importance of the medium utilised for Finlay - all aspects of a printed work are to be controlled and have meaning. This is one of the few documents that shows his thought process in the making of the book rather than its intellectual genesis.

Posted at 20:30h in Miscellany

Bonn: Galerie Klein, 1981
10.5 x 15cm, 4pp black on white card announcement card for the title installation with one b/w image of Beuys' feet standing on a blackboard within the work. VG+. 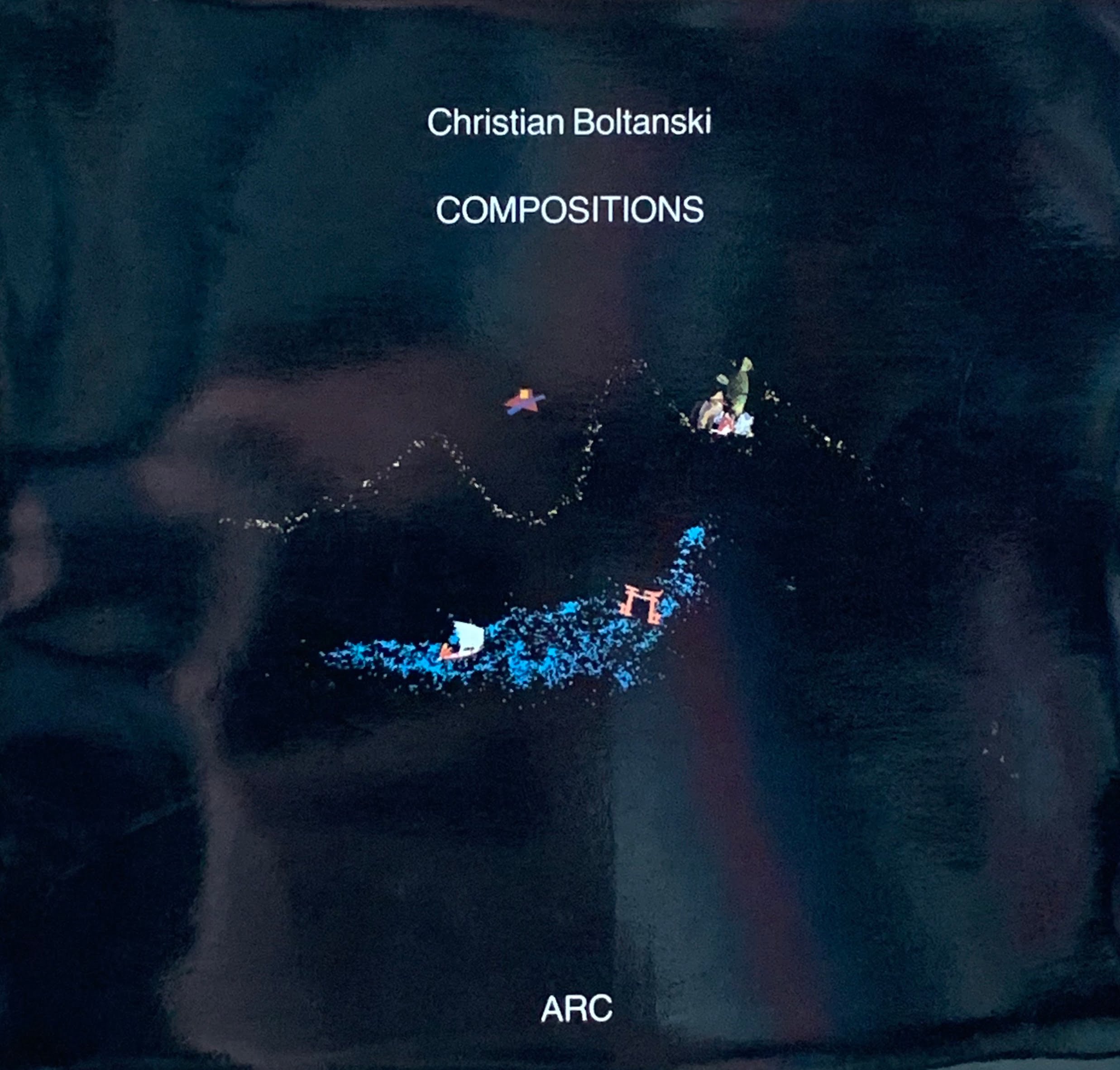 Posted at 14:18h in EXHIBITION CATALOGUES

Paris: ARC/Musée d'Art Moderne de la Ville de Paris,1981
21 x 19.5cm, 48pp plus card covers. Exhibition catalogue for a major show of posed photographs by the artist (mostly colour) where models and brightly coloured objects (such as toys, pencils and drawing tools) are arranged to create highly saturated multiple images shown against black backgrounds. Essay by Dominique Viéville and an interview between Boltanksi and Suzanne Pagé (both in French).
This period of work broke temporarily with the artist's previous practice using found or restaged photographs and now utilised his greater technological ability to create much larger works in such formats.
VG+.