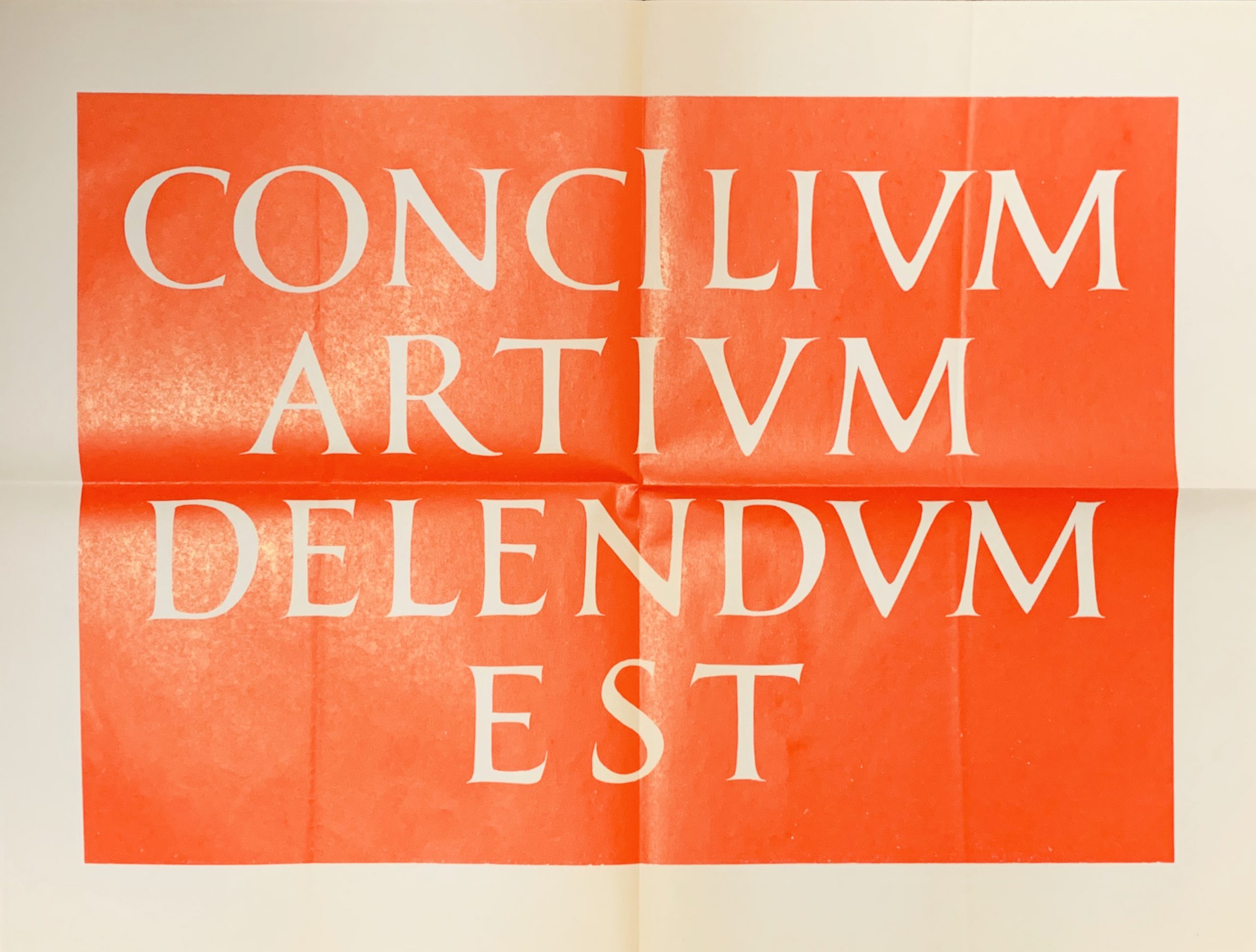 Little Sparta: Wild Hawthorn Press, n.d. (c. 1982)
30.5 × 43.2m, red on white offset lithograph. This is one of four which carry ant-Arts Council messages in Latin. This poster print has " CONCILIUM ARTIUM DELENDUM EST" which roughly translates into "The Arts Council Must be Utterly Destroyed" although there are some liberties taken in the language by Finlay.
Printed as part of Finlay's campaign against the muribund Scottish Arts Council and Strathclyde Region over a Rates dispute, these lithographs were fly-posted on the Scottish National Gallery, the Scottish Arts Council building and other places in Edinburgh by supporters of Finlay (called the Saint-Just Vigilantes).
Apparently ‘The Arts Council Must be Utterly Destroyed’ is derived from a phrase Cato would add to the end of every speech as a reference to his hatred of Carthage.
This lithograph is folded but all copies are rare as many were used as campaign posters on the buildings as described above. Apparently the typography was by Nicholas Sloan.

Aisbach: Verlaggaleria Leaman, n.d. (1982 or 1983)
Printed plastic and card folder with metal ring binder. Content of individual contributions and multiples by a wide range of artists (many from the fields of conceptual art, visual poetry and some of the Fluxus- affiliated artists). Paik here contributes 4pp offset reproductions of his sketchy drawings 'Moon is reaction to sun'; Knowles a map of 'bean troubles'; Finlay's work is 'Twin-sets', Cobbin has two fold-outs 'Triptych five' and 'Triptych six'; Michael Drucks a lithograph (Xerox) in plastic folder; Ruhm a numbers work: 'Zeitgedicht' from 1981 and Tot: a work on public demonstations complete with German police permission letter for a demonstration. Crozier's contribution is a series of drawings (Xerox). Scarce. VG+. 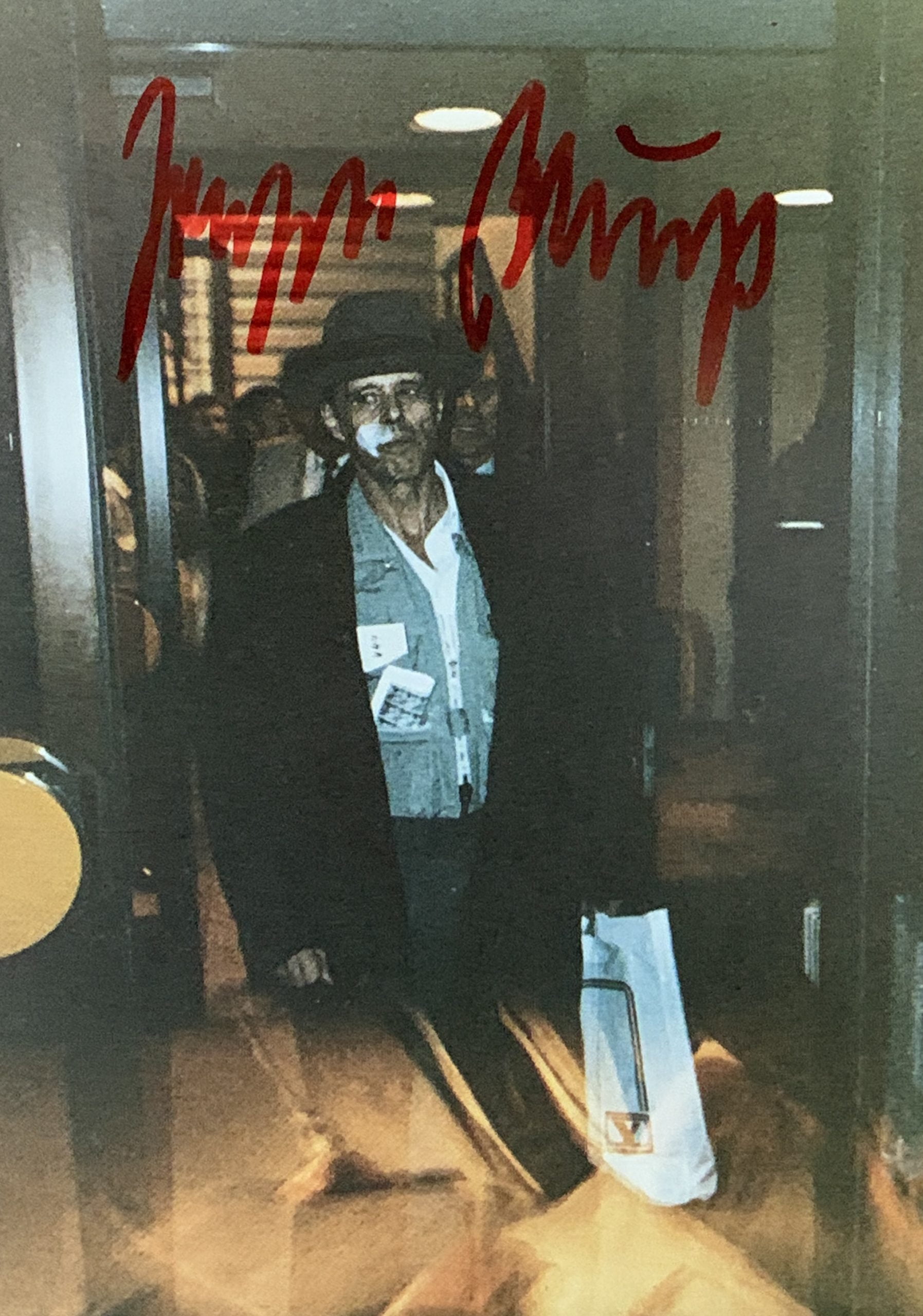 Heidelberg: Edition Staeck, 1982
15 x 10.5cm, 2pp. Original postcard edition by Beuys issued as part of the "Originalgrafik - Series D" showing the artist walking arriving at the airport in East Berlin. Surprisingly this is not found in Schellmann. Signed by Beuys in red felt tipped pen. VG+. 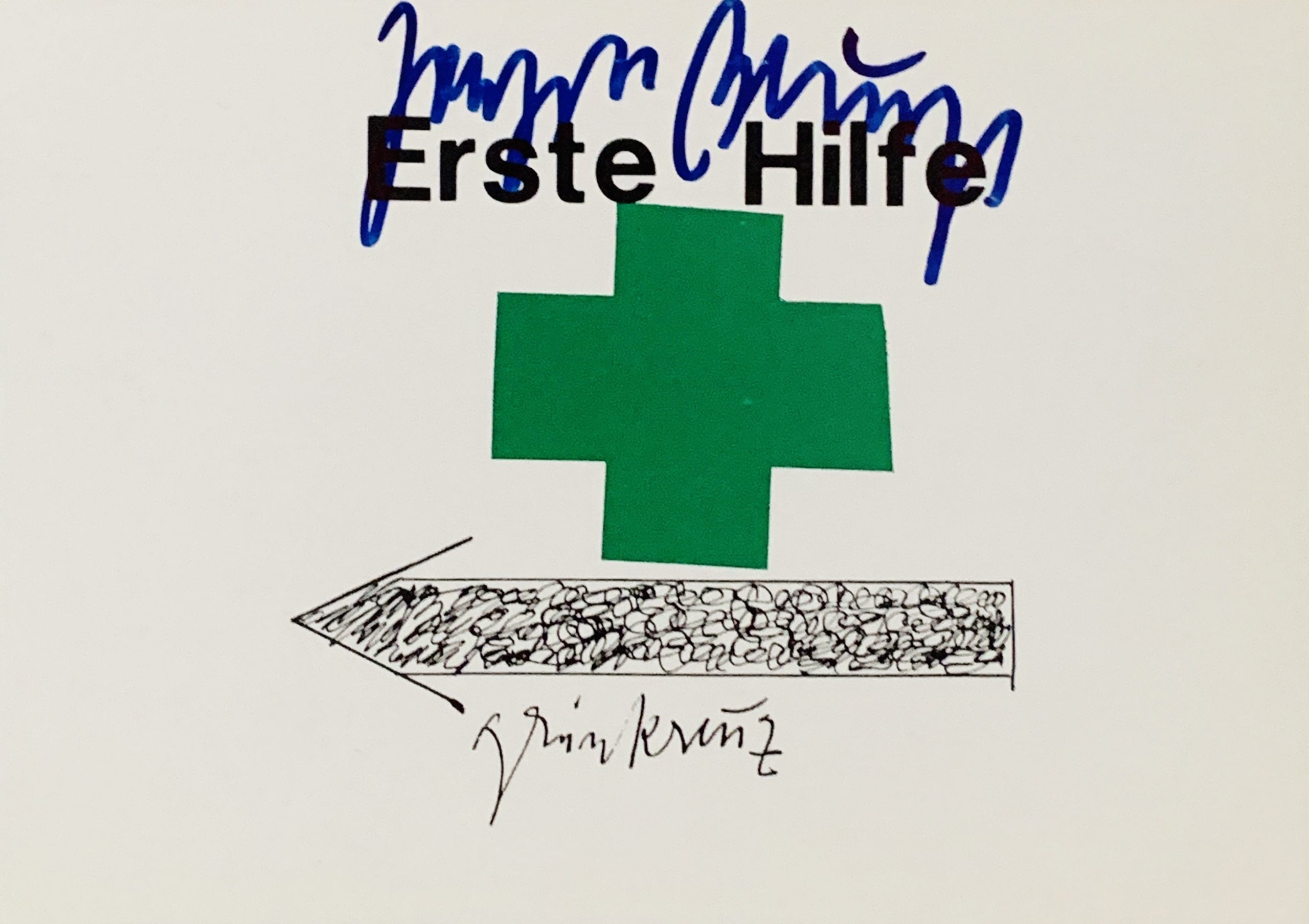