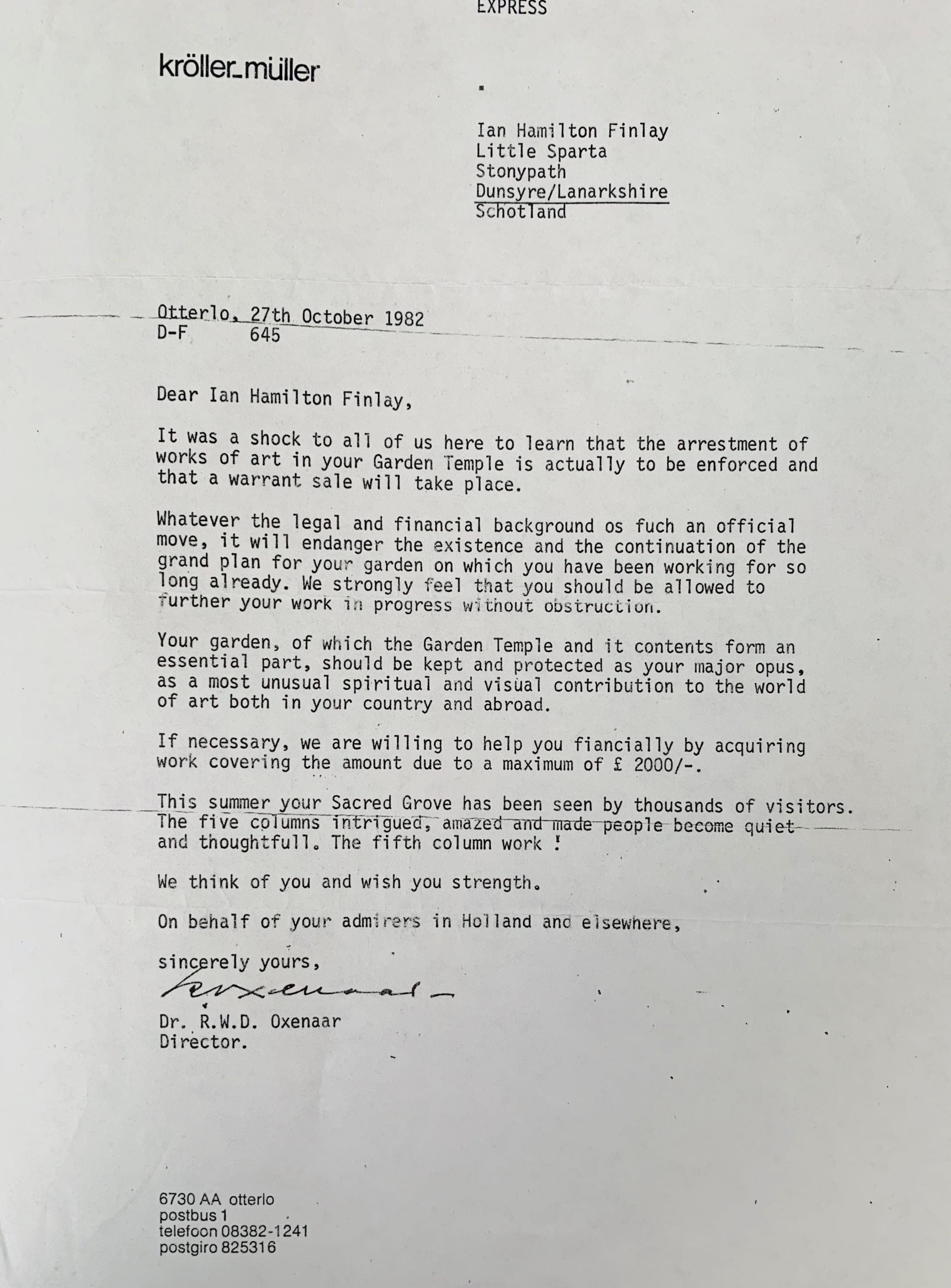 27 Oct XEROX COPY OF A LETTER FROM THE KROLLER MULLER MUSEUM TO FINLAY. 1982.

Otterlo: Kroller Muller Museum, 1982
30 x 21cm, 1pp vintage xerox copy of a letter sent from the Director of the Kroller Muller Museum expressing support for Finlay after the issue of a warrant for the arrestment of works of art from Little Sparta. The Director indicates that he thinks such a sale will "endanger the existence" of Finlay's garden and calls on the garden to be "kept and protected as (Finlay's major opus".
The letter offers support by the purchase of a work to a maximum of £2000.
Circulated to friends of Little Sparta and the press as part of Finlay's PR campaign against the Regional Council.

Little Sparta: Finlay, n.d. (c. 1982)
Standard hand addressed DL manilla postal envelope to Harry Warschauer. Notable for the black rubber stamp impression added by Finlay to the front: "STRATHCLYDE REGION FOR NACHT-UND-NEBEL" and also a 3 x 2cm, b/w cinderella postal stamp designed by Finlay with an image of Joseph Stalin with the words "Strathclyde region" above and below and a fictitious price of 15p. Return address stamping on back. Slightly roughly opened. Interestingly the postal service has cancelled the cinderella stamps as well as the authentic stamp. 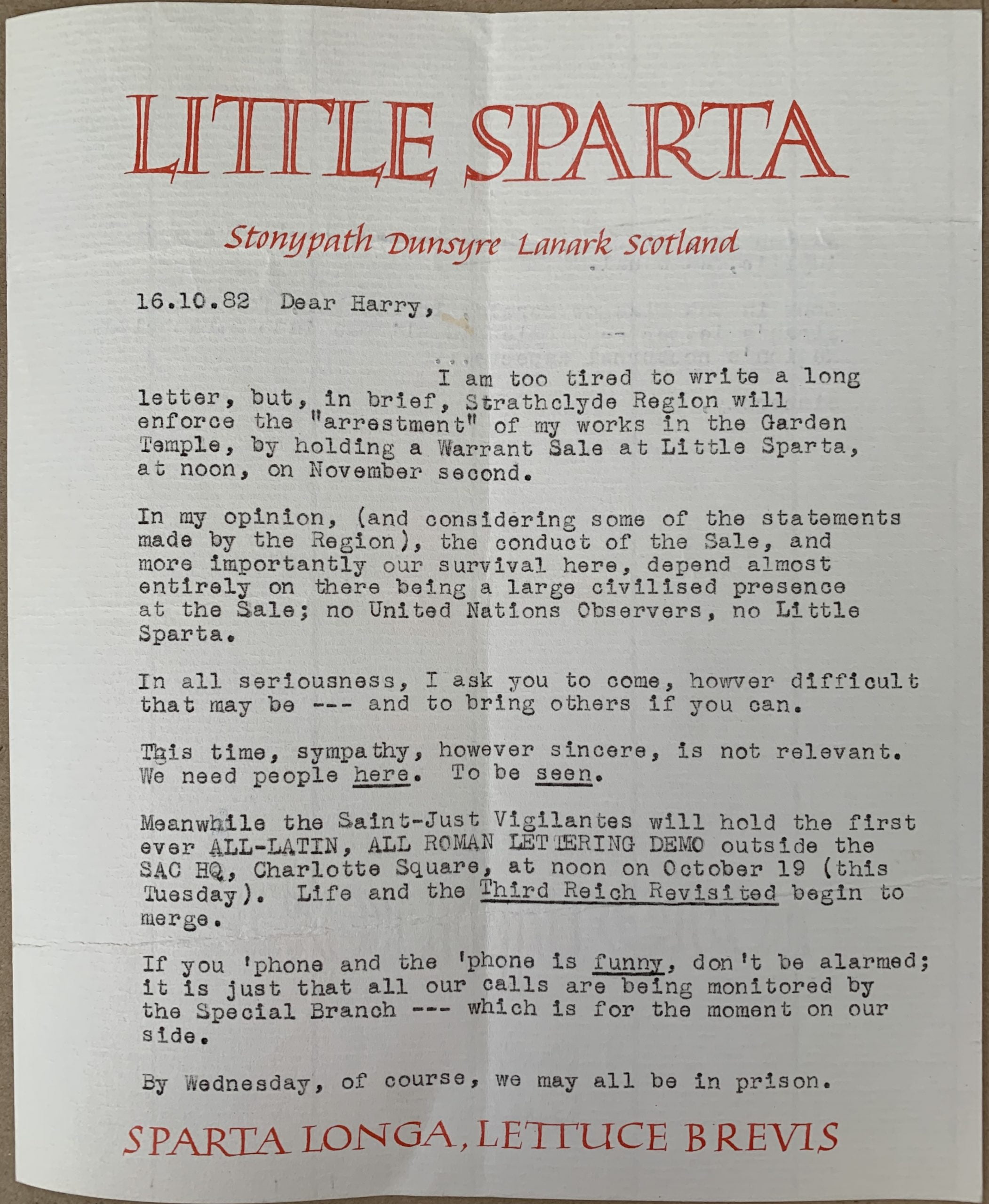 25 x 20cm, original TLS on Little Sparta stationery dated 16.10.82.
A letter sent by Ian Hamilton Finlay to "Harry" - presumably Harry Warschamer - telling the latter about the Warrant Sale planned at Little Sparta by Strathclyde Region to recoup their claimed rates on November 2nd 1982.
The letter asks for Warschamer to come and "bring others if you can" presumably to help resist the sale.
The letter also tells of the first "ALL-LATIN, ALL ROMAN LETTERING DEMO" by the Saint-Just Vigilanties outside the Scottish Arts Council HQ on October 19th.
Finlay also claims that all of his calls are "being monitored by the Special Branch" and "by Wednesday we may all be in prIson."
The letter is signed in blue ink "Ian".
The letterhead here is worth notice; it has at the bottom the motto: "SPARTA LONGA, LETTUCE BREVIS" which roughly is "Sparta is long, lettuce is short". Finlay's farm was called "Little Sparta". 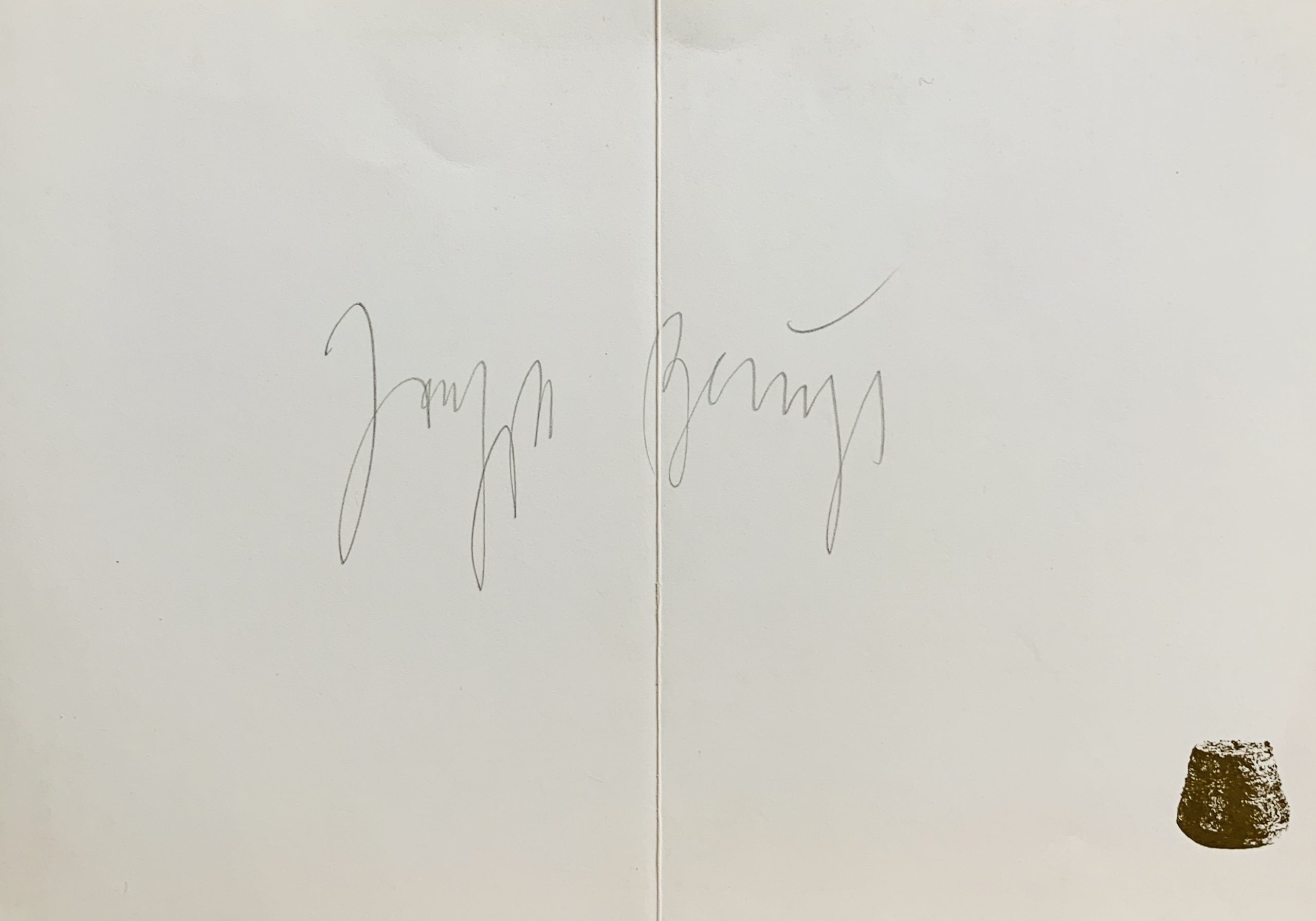 Berlin: Vergolderei Kunsthandlung Silvia Menzel, 1982
15 x 10.5cm, 4pp - reflective gold on white announcement card for the edition and sculptural work by Beuys. This card is signed over the double leaf outside in pencil by Beuys. VG+. 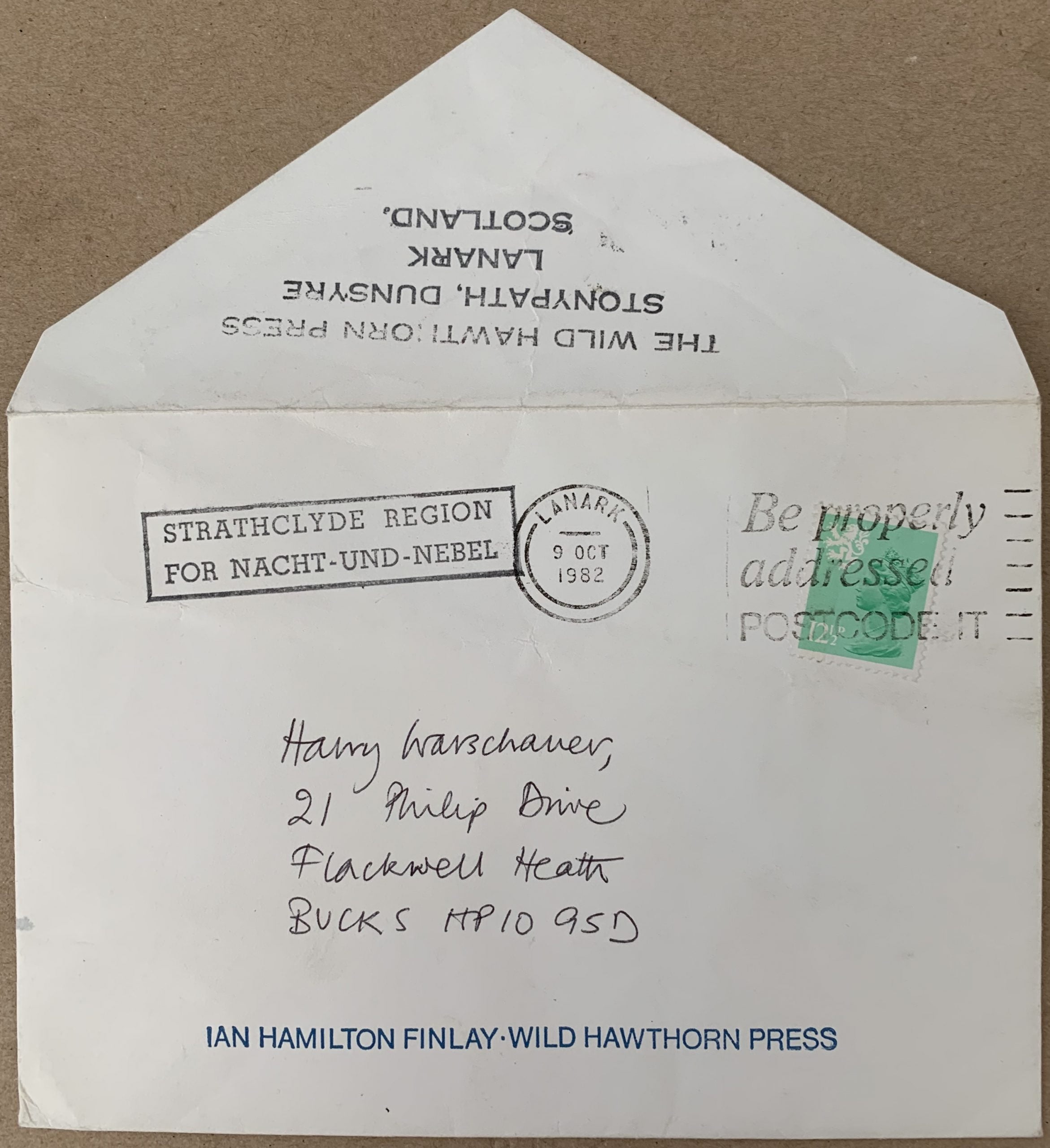 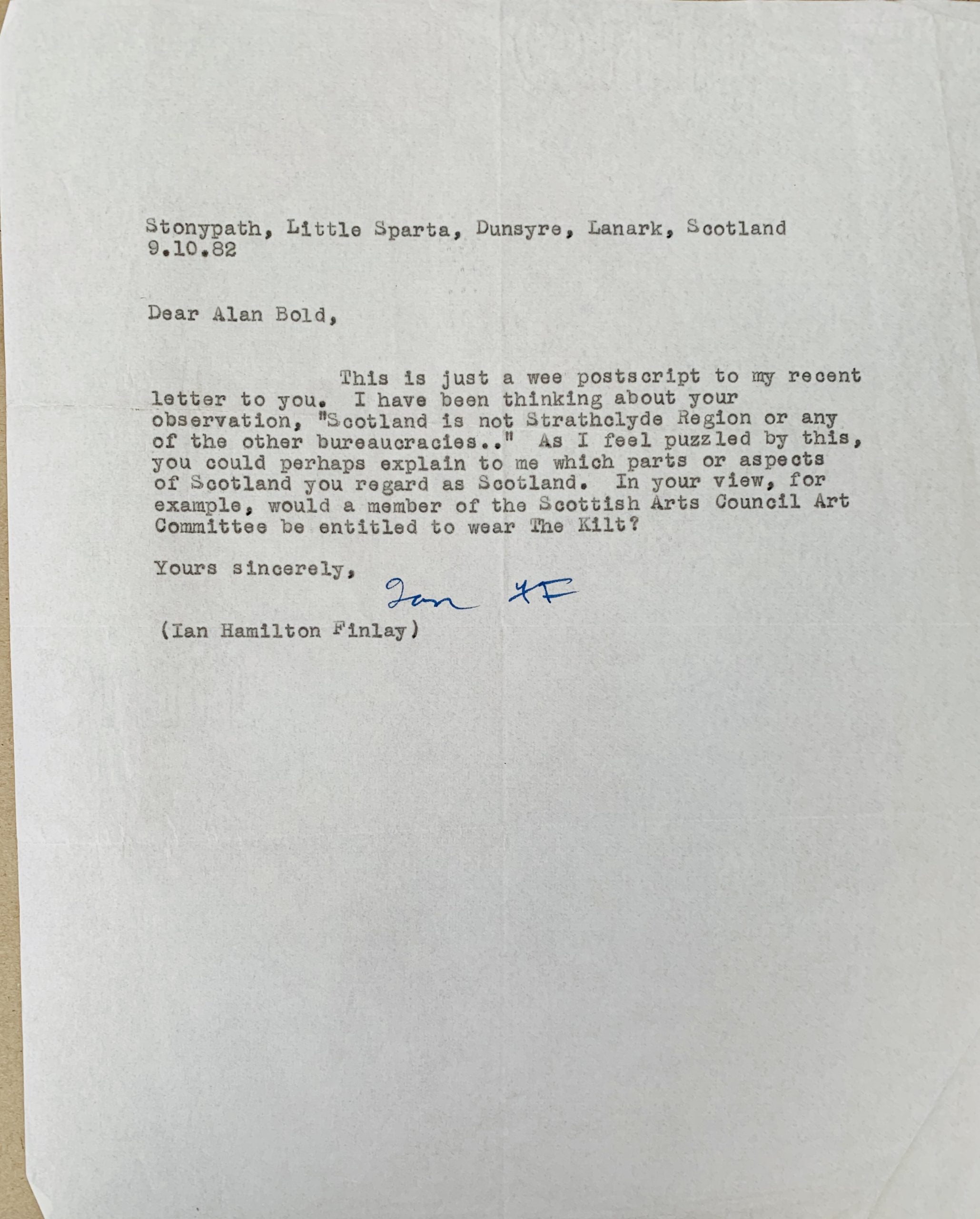 25 x 20cm, original carbon copy on typing paper dated 9.10.82.
A letter sent by Ian Hamilton Finlay to the Scottish poet Alan Bold in which Finlay adds a postscript to an earlier letter - Bold had written publicly that "Scotland is not Strathclyde Region or any of the other bureaucracies... 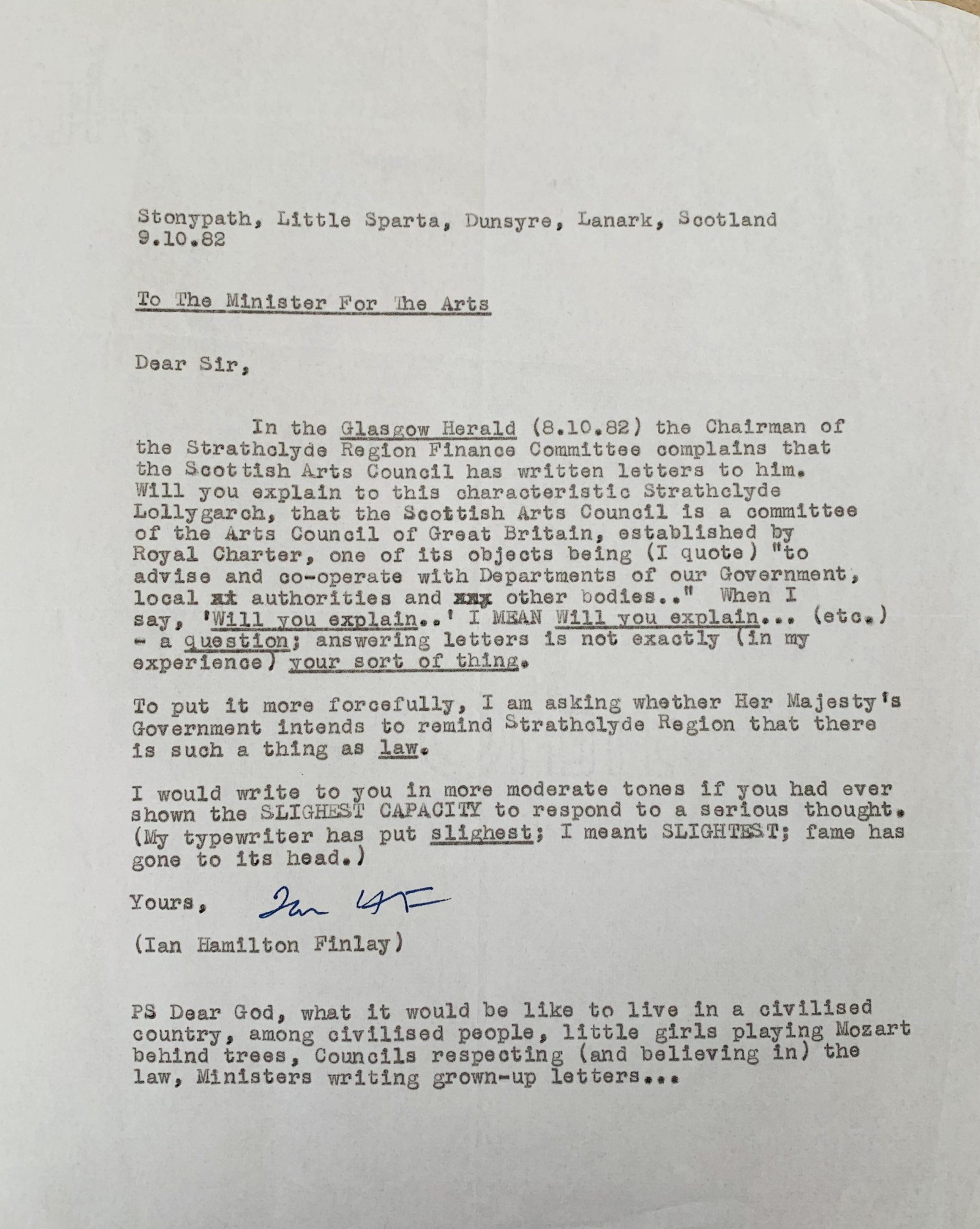 25 x 20cm, original carbon copy on typing paper dated 9.10.82.
A letter sent by Ian Hamilton Finlay to the "Minister of the Arts" asking the latter to intervene in the ongoing dispute over the rating of Finlay's "Temple" building. That request however characteristically is not a polite one - Finlay refers to the Chairman of the Strathclyde Regional Finance Committee as a "Lollygarch" and after some verbal insults tells the Minister in uncertain terms that they should "remind Strathclyde Region that there is such a thing as law.". He then adds further insult to insult by writing" I would write to you in more moderate tones if you had ever shown the SLIGHEST (sic) CAPACITY to respond to a serious thought" following which Finlay then jokes that the mistake was the typewriter's - "fame has gone to its head"!
The P.S. is of interest also - Finlay describes his idea of a "civilised country" - little girls playing Mozart behind trees being high on his list it seems.
Signed in blue ink "Ian". This was a copy sent to a friend for reasons of disseminating information.