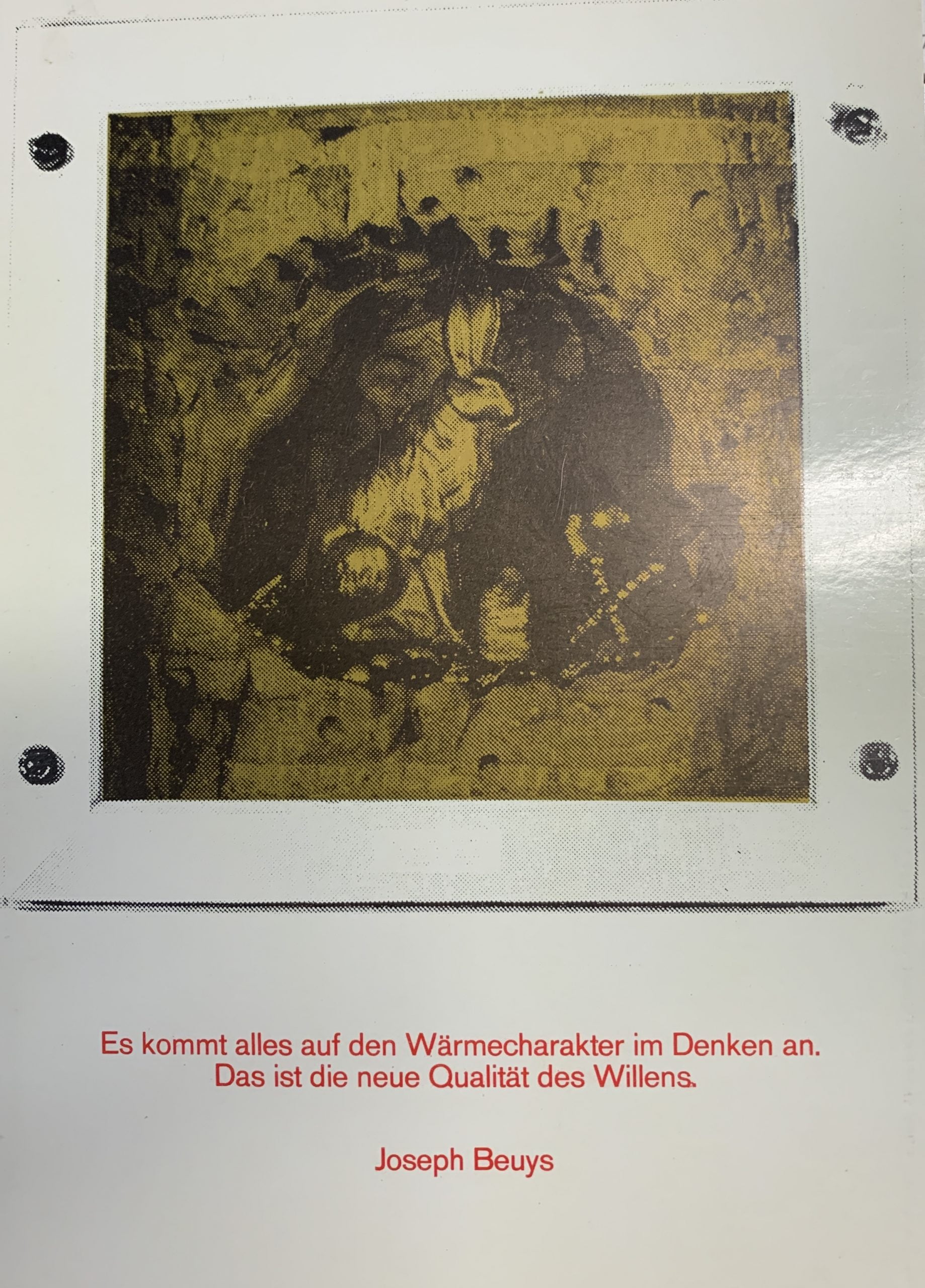 Gelsenkirchen: FIU, n.d. (1982)
115 x 10.5cm, full colour artist's postcard issued by the Free International University with an image of the golden hare that Beuys made out of a melted-down crown during a public aktion in Kassel Documenta in 1982 to help raise funds for his 7000 Eichen project. VG+. 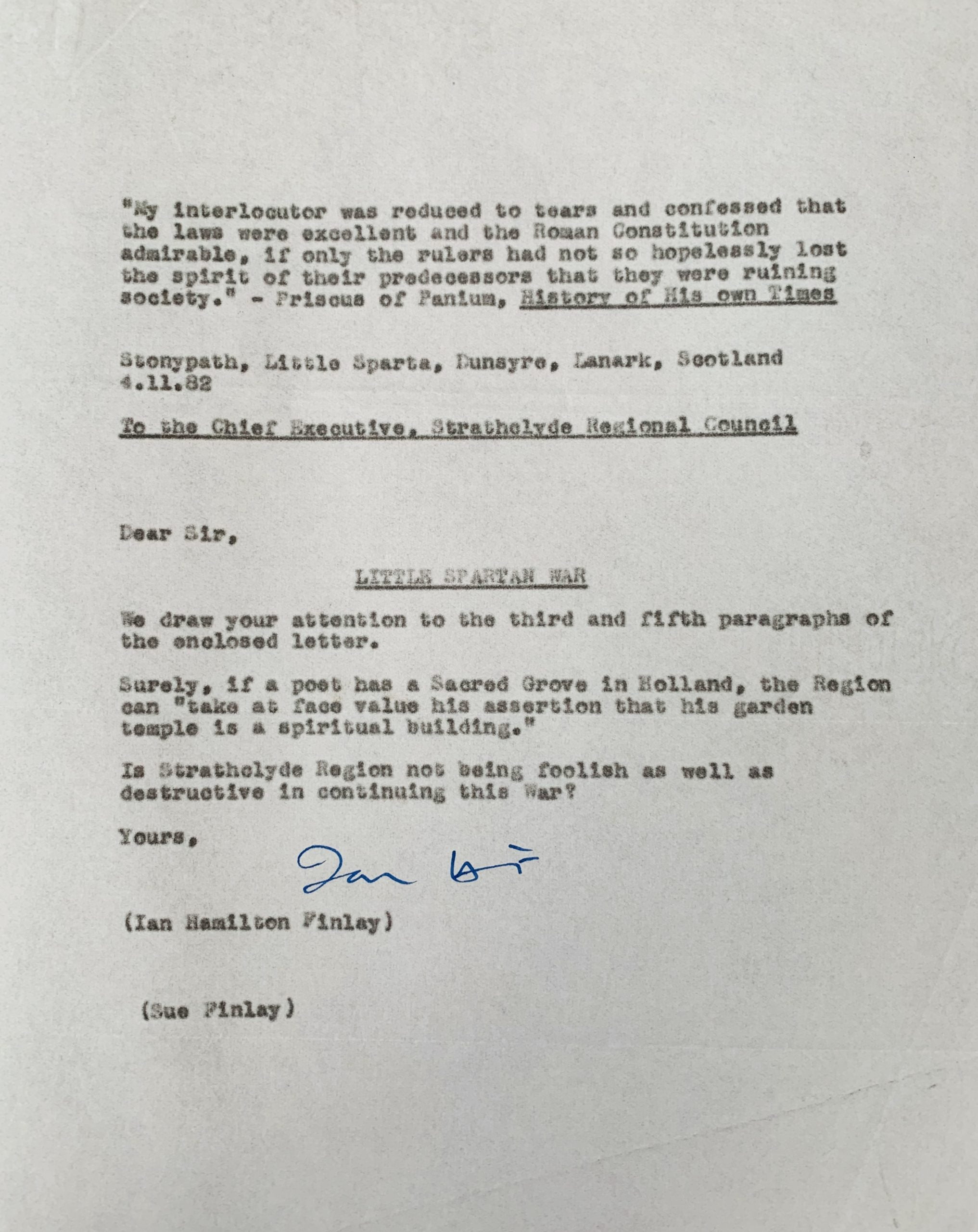 25 x 20cm, original carbon copy on typing paper. A letter sent by Finlay to members of the press "drawing their attention to the third and fifth paragraphs of the enclosed letter" .
This was the covering letter that accompanied a xerox letter from the Director of the Kroller Muller Museum in the Netherlands which gave support to Finlay (see separate listing in this section of the collection). Finlay points out that if an "poet has a Sacred Grove in Holland, the Region can 'take at face value his assertion that his garden temple is a spiritual building.'"
Finlay also quotes Priscus of Panium's History of His Own Times on the moral legitimacy of constitutions. 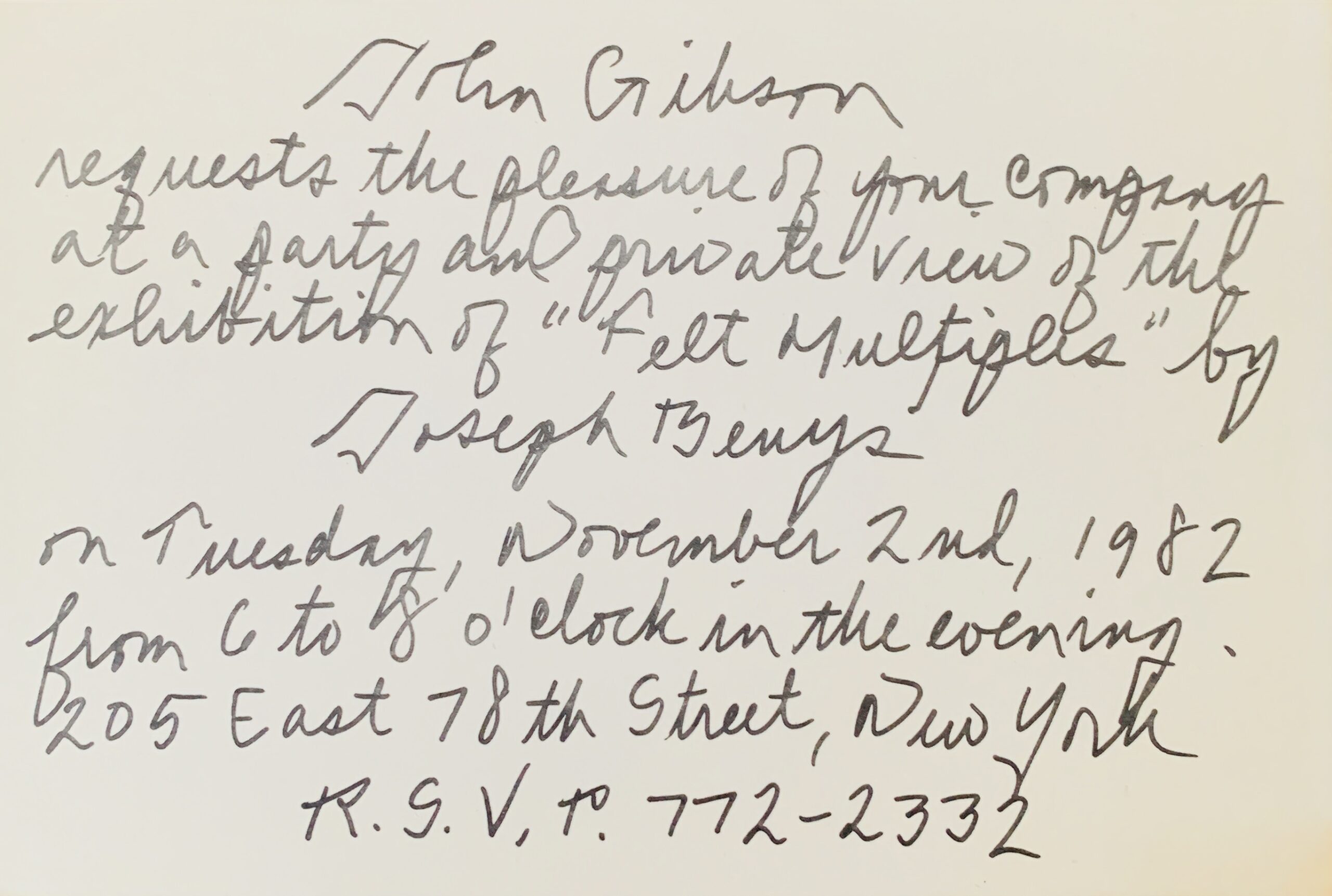 NYC: John GIbson Gallery, 1982
10.3 x 15.3cm, 1pp typographical invitation card reproduced from a hand-written text (by John Gibson who often used his left hand as here and wrote the text upside down to create an unusual effect) for the exhibition "Felt Multiple". VG+. 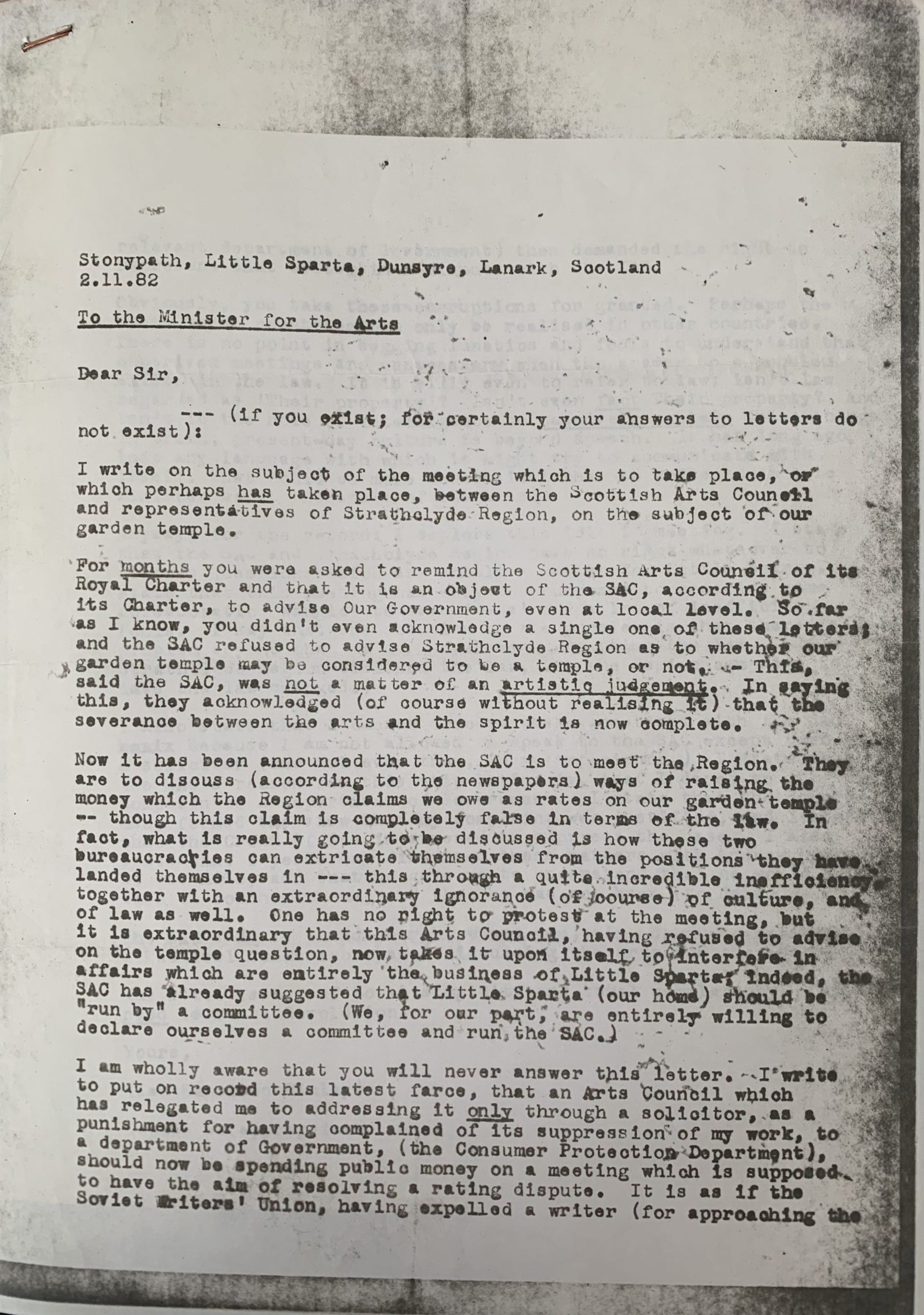 Little Sparta: Finlay, 1982
30 x 21cm, 2pp vintage xerox copy (on yellow paper) of a letter sent by Finlay to the then Minister of the Arts.
As often from Finlay bitterly biting letter to the Minister firstly complaining that he did not reply to letters. FInlay complains that the legally instituted Scottish Arts Council refuse to advise Strathclyde Region whether Finlay's disputed building is a temple or not.
Finlay notes that the SAC suggested that a committee should perhaps run Little Sparta rather than Finlay - Finlay in turn here suggests that "We, for our part, are entirely willing to declare ourselves a committee and run the SAC."
Finlay says that he does not expect a response to this letter but just wants to put on record his opposition to a proposed meeting between the region and the SAC. He also noted that the SAC refuses to talk to him unless through a solicitor because he had previously complained to the Arts Minister about their behaviour.
Finally Finlay writes: "The state is one of total stupidity and total complacency. The need is for a Revolution."
A copy of the original circulated to friends for the purpose of information as was Finlay's habit at this time. 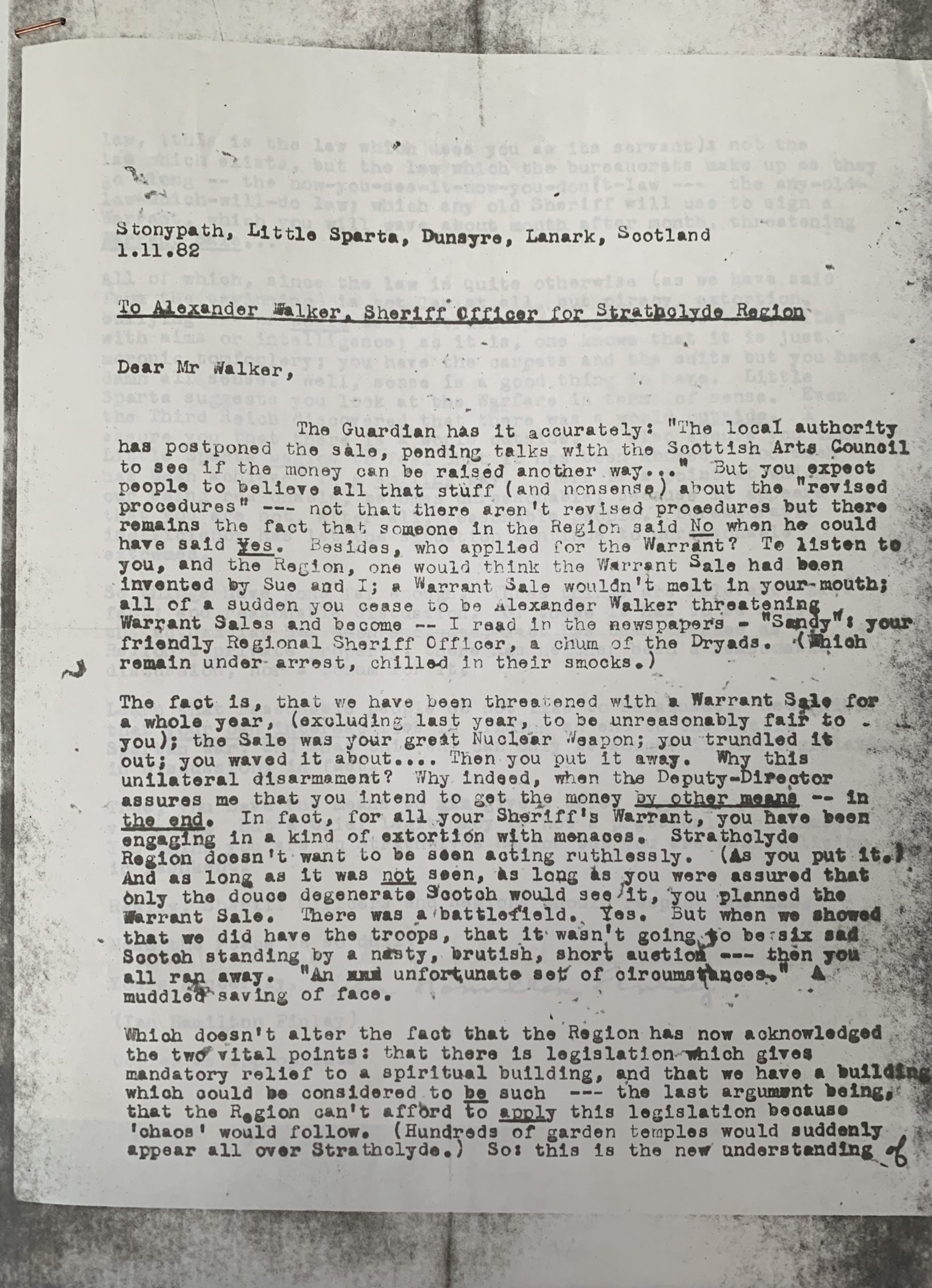 01 Nov XEROX COPY OF A LETTER FROM FINLAY TO THE STRATHCLYDE REGION SHERIFF OFFICER. 1982.

Little Sparta: Finlay, 1982
30 x 21cm, 2pp vintage xerox copy (on yellow paper) of a letter sent by Finlay to Alexander Walker, Strathclyde region's Sheriff Officer.
A bitterly sarcastic letter to Walker liking the latter's threat of a Warrant Sale to a nuclear threat and suggesting that they were determined to get their money by a "kind of extortion with menaces".
Finlay accuses him of cowardice - running away when it was clear there was more than "six sad Scotch standing by a nasty, brutish, short auction".
Finlay after much further and witty opprobrium towards the poor bureaucrat, argues that the law is being abused, that it's application is flexible and could easily be stopped if the Region wanted and hinting at wanting a reconciliation (which given the abuse in the letter seems hardly likely to be agreed upon.)
A copy of the original circulated to friends for the purpose of information as was Finlay's habit at this time. 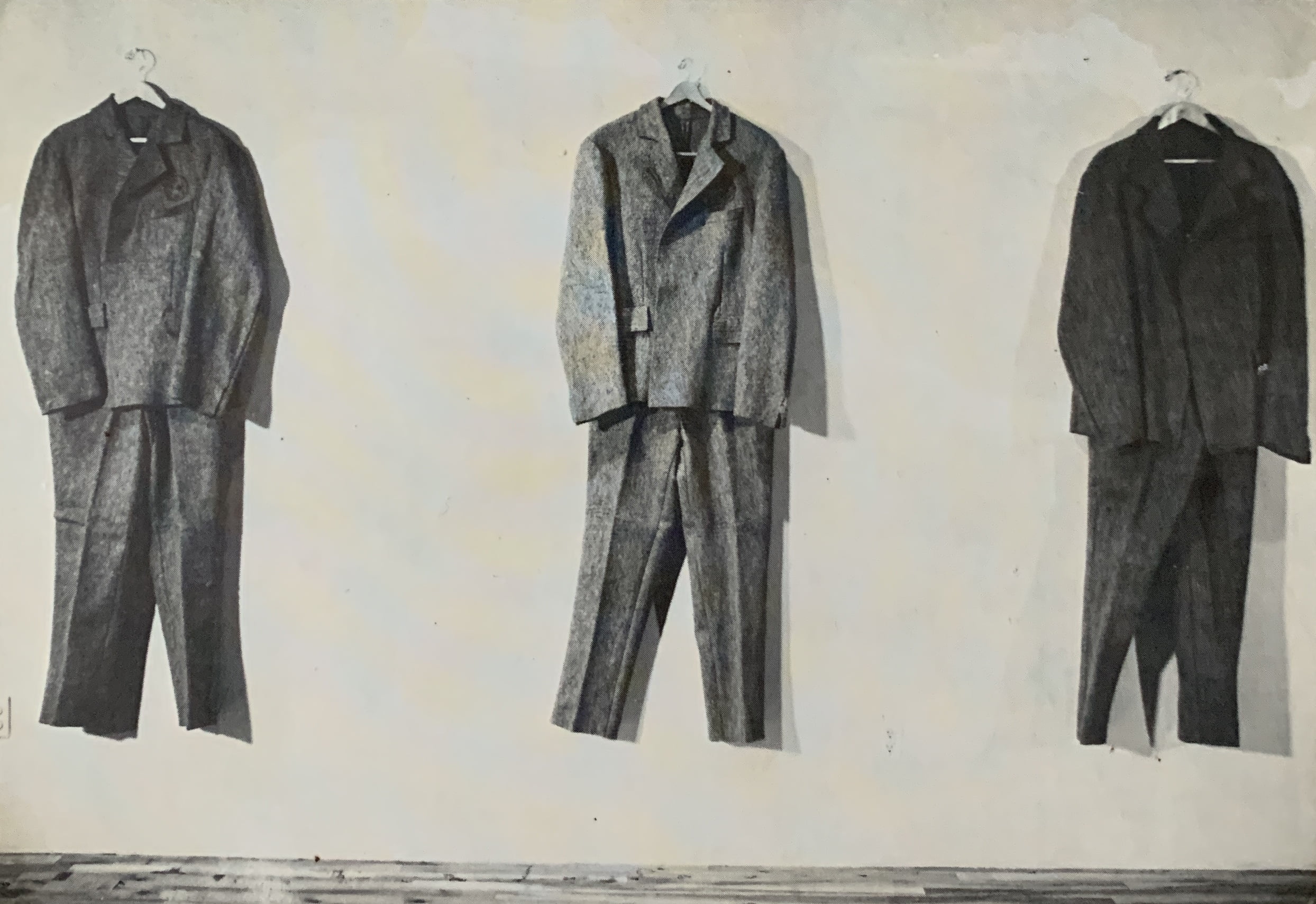