Posted at 09:31h in Artist's Postcards

Little Sparta: Wild Hawthorn Press, 1983
20.7 x 10cm, 1pp. A cut-out drawing by Ron Costley of a republican army drum such as played by the martyred Viala. The boy's name is incorporated into the diagonal patterning around the sides - the name having letter shapes that match that well. VIVE LA REPUBLIQUIE! 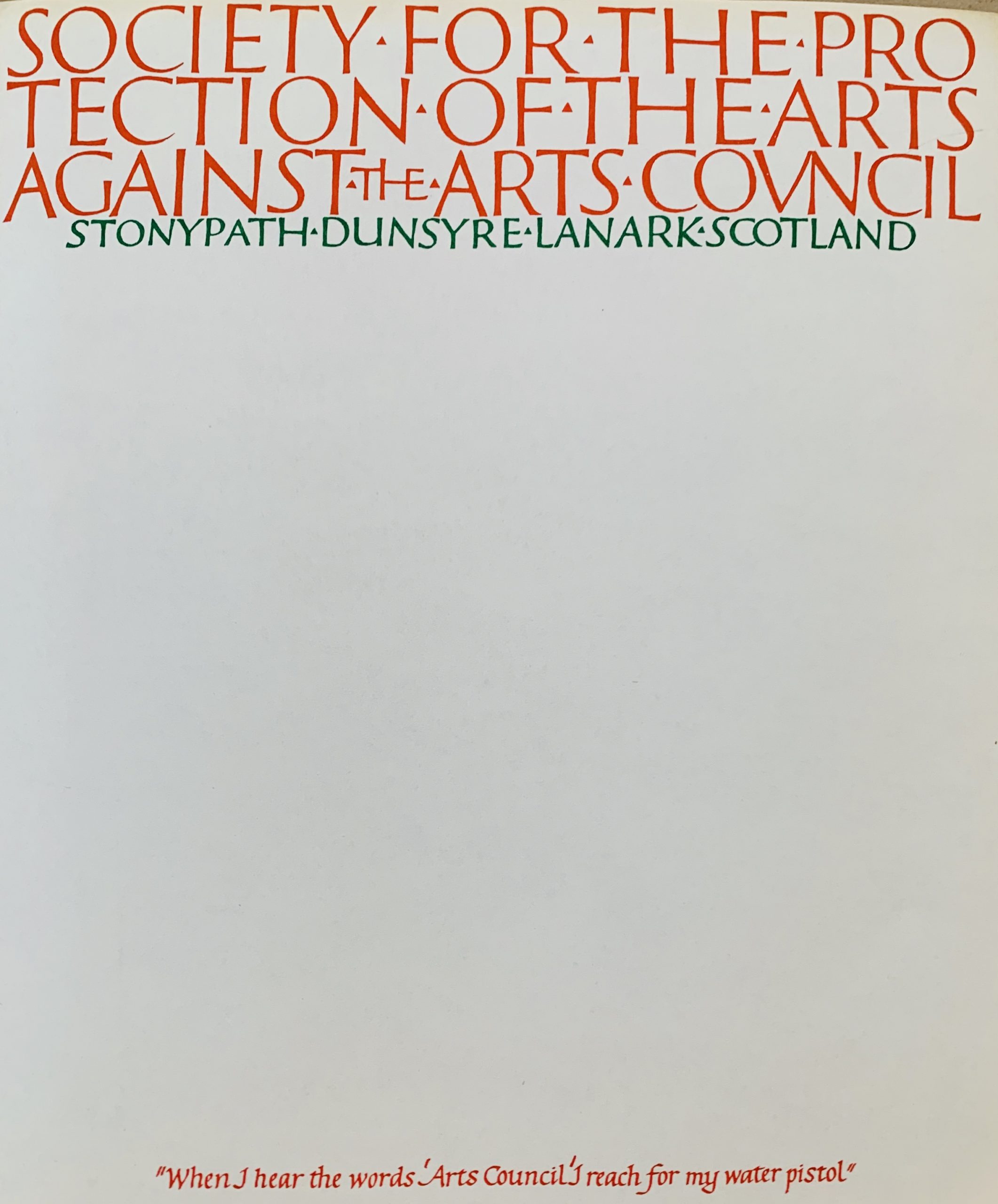 20 May SOCIETY FOR THE PROTECTION OF THE ARTS AGAINST THE ARTS COUNCIL. UNUSED LETTERHEAD. c. 1982

Little Sparta: Wild Hawthorn Press, n.d. c. 1982.
21 x 18cm, 1pp printed letterhead - red and green on white. Finlay created a number of different stationery for Little Sparta and used them (as far as we can tell) indiscriminately for his correspondence. This unused example has across the top "SOCIETY FOR THE PROTECTION OF THE ARTS AGAINST THE ARTS COUNCIL". And at the bottom "When I hear the words 'Arts Council' I reach for my water pistol". Fine. ...

Posted at 10:01h in Artist's Postcards

Little Sparta: Wild Hawthorn Press, 1983
20 x 8.8cm, 4pp. A folding card with Finlay's poem overprinted on a camouflage pattern in green on light brown. The poem links various body parts and tree parts to others. The first half of the poem link the head to the fingers via other parts, the second the roots to the blossom on the twigs. The final line is "and fruit" which can be allocated both to the hand and the twig (a human can hold fruit). On the back of the card Trump cites both a book on Physiognomy - the habit of judging traits from structures and also Strathclyde Region's Schedule of Poinding Assessments Payable to the Strathclyde Regional Council (1982) in which Finlay would have been included because of his dispute over the Garden temple.
A dryad of course is a mythical spirit that is found within a tree - the metaphor of "tree - human" here is hinted at as being enough to allow judgement about that person, tree or even farm. 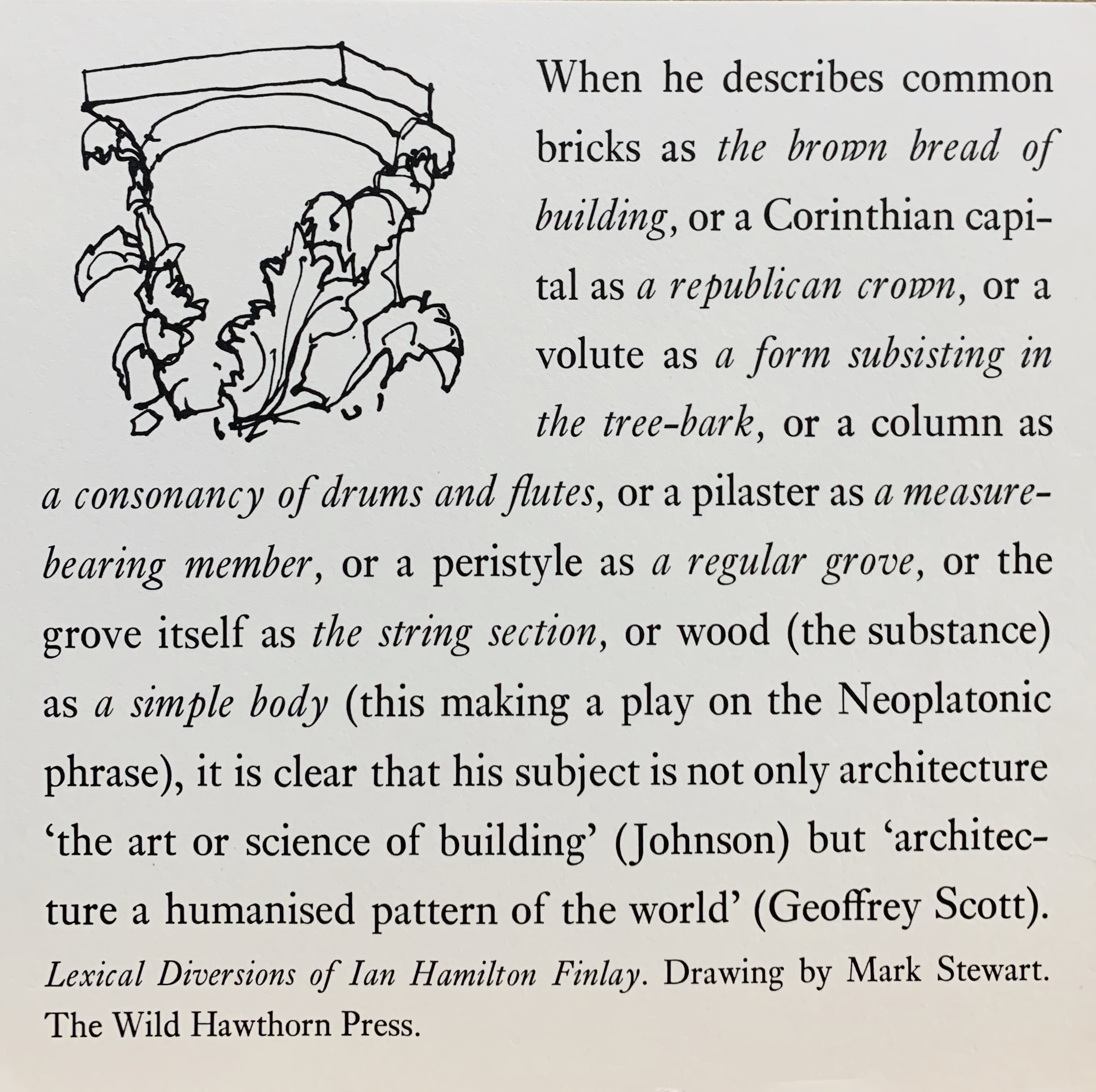 Posted at 14:12h in Artist's Postcards 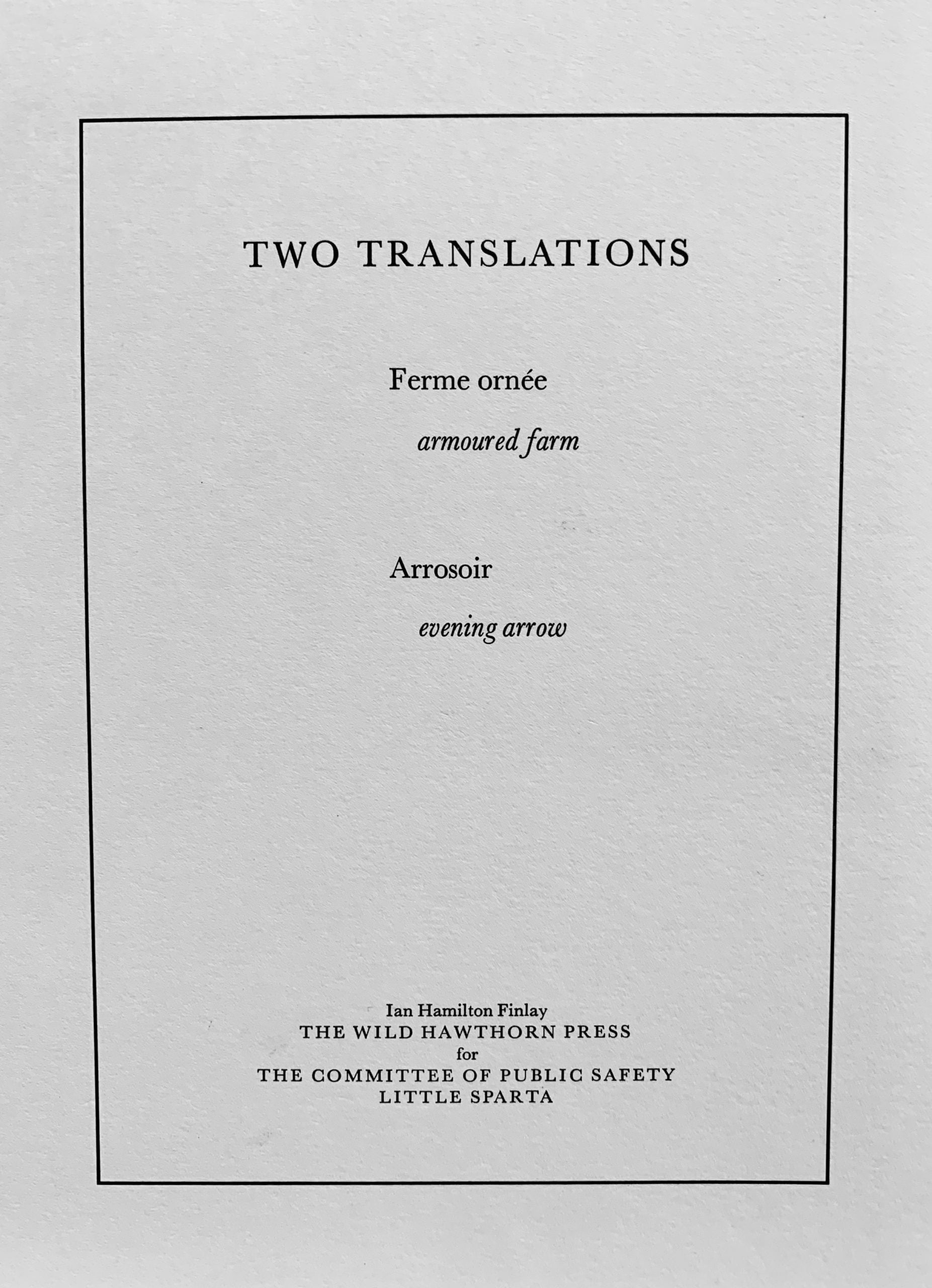 Posted at 13:46h in Artist's Postcards

Little Sparta: Wild Hawthorn Press, 1983
20.5 x 15.5cm , 1pp black on white card. The typographically designed card has two "translations:" which are poetic rather than accurate:
Ferme ornee
armoured farm
and
Arroisir
evening arrow
Hence 'ornate farm' becomes an 'armoured farm' and "watering can" becomes "evening arrow" both of which suggest the militarisation of the grounds. A reaction to Finlay's worries about his enemies coming to Little Sparta and stealing his assets as had happened in March of the same year as publication. VG+.

Posted at 10:29h in Artist's Postcards

Leeds: New Arcadians Press, 1983
11 x 16cm, printed purple envelope with title and publication information content of two cards.
The first card is:
2 PROSPECTS.
8.3 x 10.9cm 6pp (asymmetric folds). A folding card which has two drawings by Ian Gardner which reflect the shape of each other. The first is a slope on a battle ship's deck, the second a slope on a hill with a house and a tree. The "elevation" of the guns to the deck and the "elevation" of the house to the tree are mathematically compared to each other in the diagram.
Two quotes one by Horace Walpole and the other John James note the evolution of "Ha! Ha!s" in gardening - places where the ground drops away suddenly and allows unimpeded access to the grounds. On a battleship the slope in front of a gun allows the missile to be projected without opposition.
The card may be a typical Finlay work bringing attention to a comparison or metaphor between two things but given the on-going feeling of conflict and being under attack at Little Sparta at this time - the card is also a threat to those attacking the elevations of the grounds.

The second card is
THE TEMPLE OF APOLLO
10 x 13cm, 2pp and a duotone photograph of the the Temple of Apollo (aka Garden Temple) - the building that Finlay disputed the rating value of and the heart of the dispute between him and the Regional Council.
Both cards are VG+.
Murray's flawed catalogue raisonne only notes the first card and does not note it was part of a pair or that it was published by someone other that the Wild Hawthorn Press. it appears these cards were published at the same time as an exhibition at Southhampton Art Gallery. 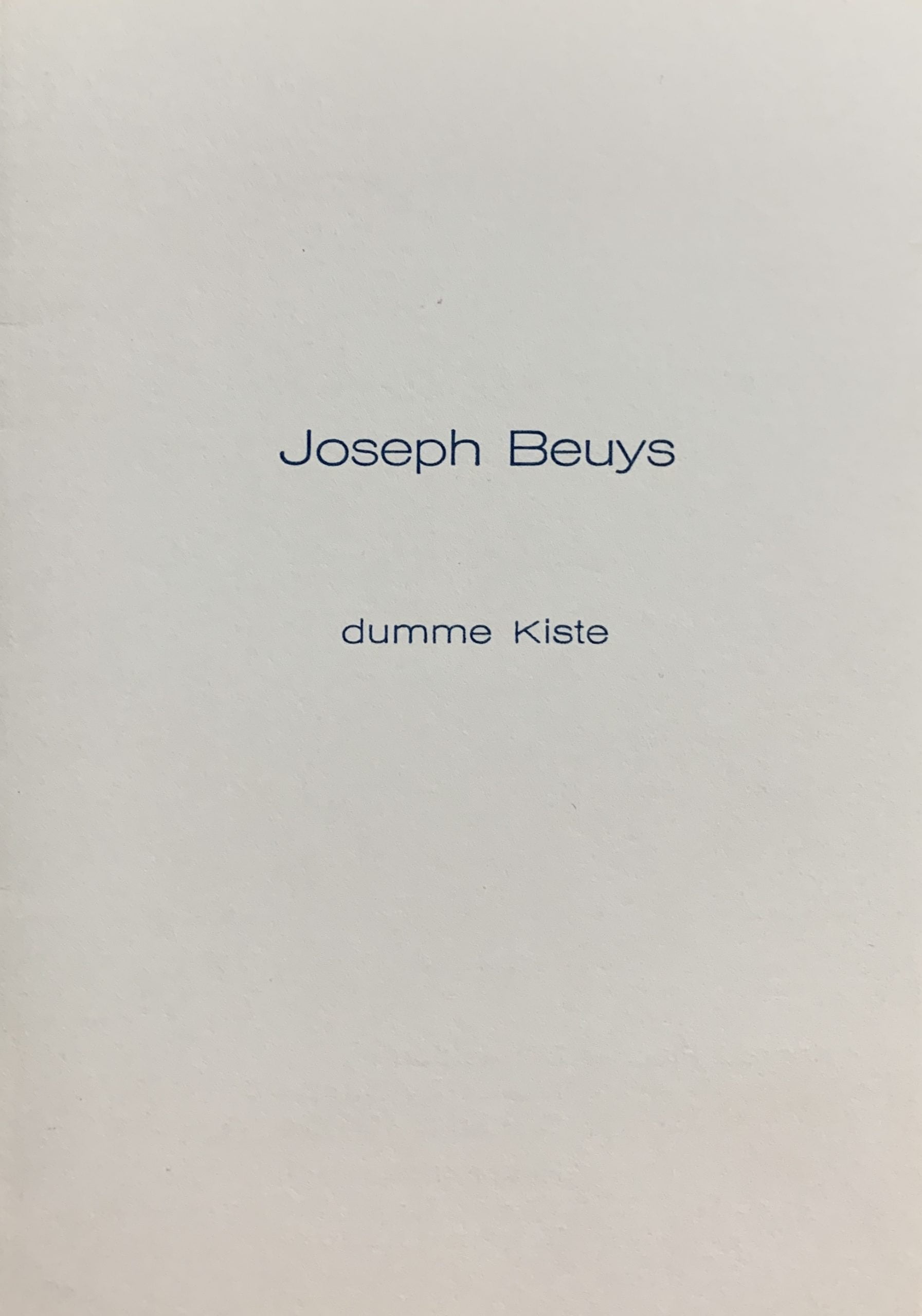 Dusseldorf: Konrad Fischer, 1983
14.8 x 10.6cm, 4pp announcement card with a typographic design throughout. The title work (translates to Dumb Box) is a metal box where all the edges of the metal have felt placed between them preventing electrical conduction. VG+.

Posted at 10:40h in Artist's Postcards

Little Sparta: Wild Hawthorn Press, 1983 20.5 x 10.4cm, 4pp (folding from the top). A cut-out drawing by Nicholas Sloan of a section of a tree trunk with an arrow piercing the wood allowing a three-dimensional paper sculpture to be made. The final image reminds one of Saint Sebastian martyred because of his supposed defence of early Christians. The attacks on Finlay at this time probably made him feel like a martyr but this image could also be read as a symbol of the garden of Little Spartas as being under attack. The title of the card is not included and the title here we have taken from Murray's catalogue raisonne although there is no reason to be sure it is correct. VG+.

Posted at 10:49h in Artist's Postcards

Little Sparta: Wild Hawthorn Press, 1983
19.7 x 12.7cm (closed size), 4pp gatefold. A mail art work by Finlay which opens up to read "SHOCK TROPES FOR LITTLE SPARTA" - the literary equivalent of the blitzkrieg, "Tropes" replacing "Troops".
This example was mailed by Finlay to Graeme Murray his then gallerist, Franked and stamped but VG+.