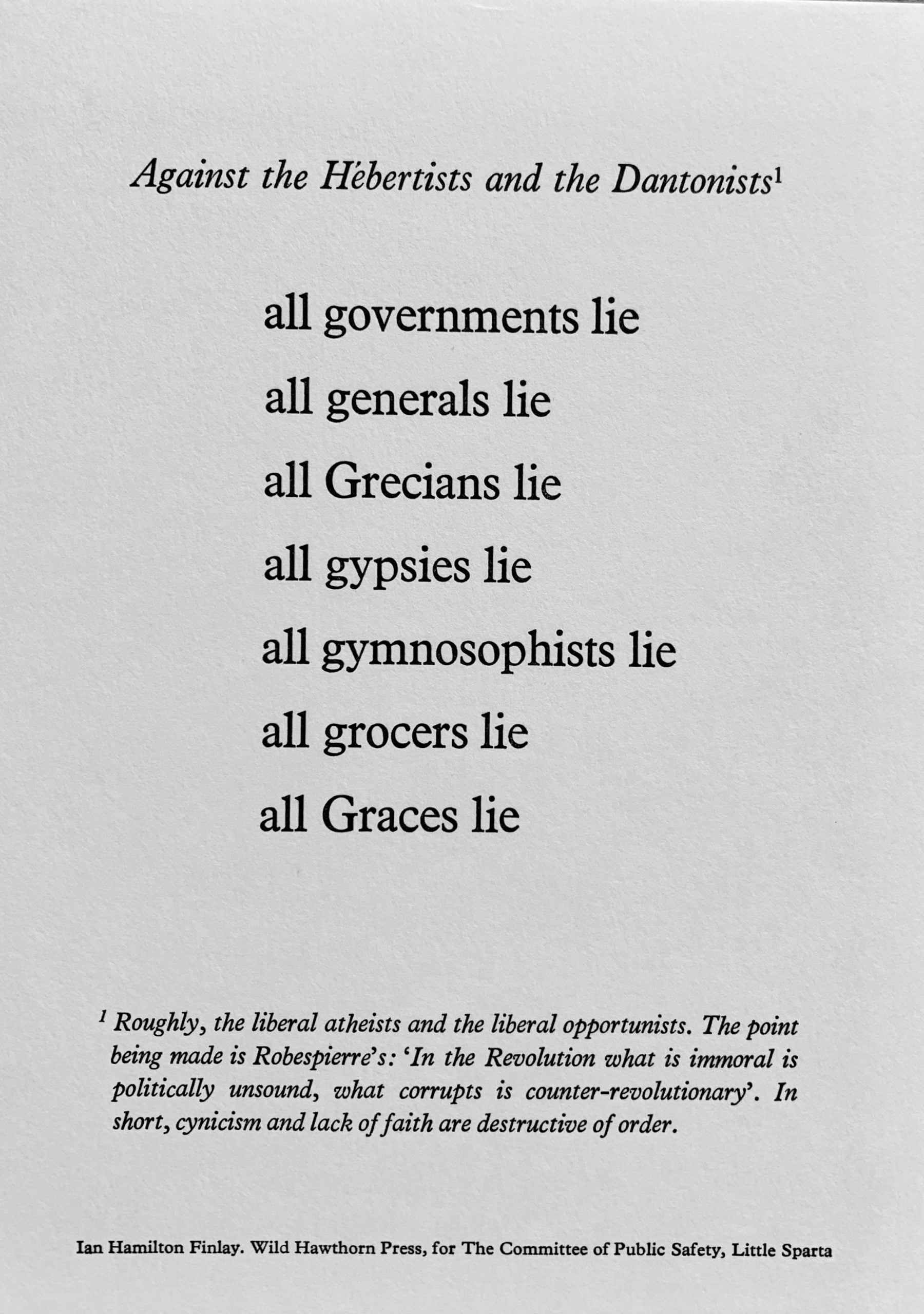 31 Jul AGAINST THE HEBERTISTS AND THE DANTONISTS. 1983.

Posted at 22:23h in Artist's Postcards

Finlay wants the repeated phrases to hint at the effect of cynicism on order - obviously some of the lines are ridiculous - and that, in some sense, that distrust of oppositional forces (such as the Hebertists who were determined to wipe out Christianity during the French revolution and the Dantonists who were more willing to accept the church as a force in the land - both were executed in turn by Robespierre who himself was not anti-clerical or at least not anti-theist) is ultimately corrupt. VG+. 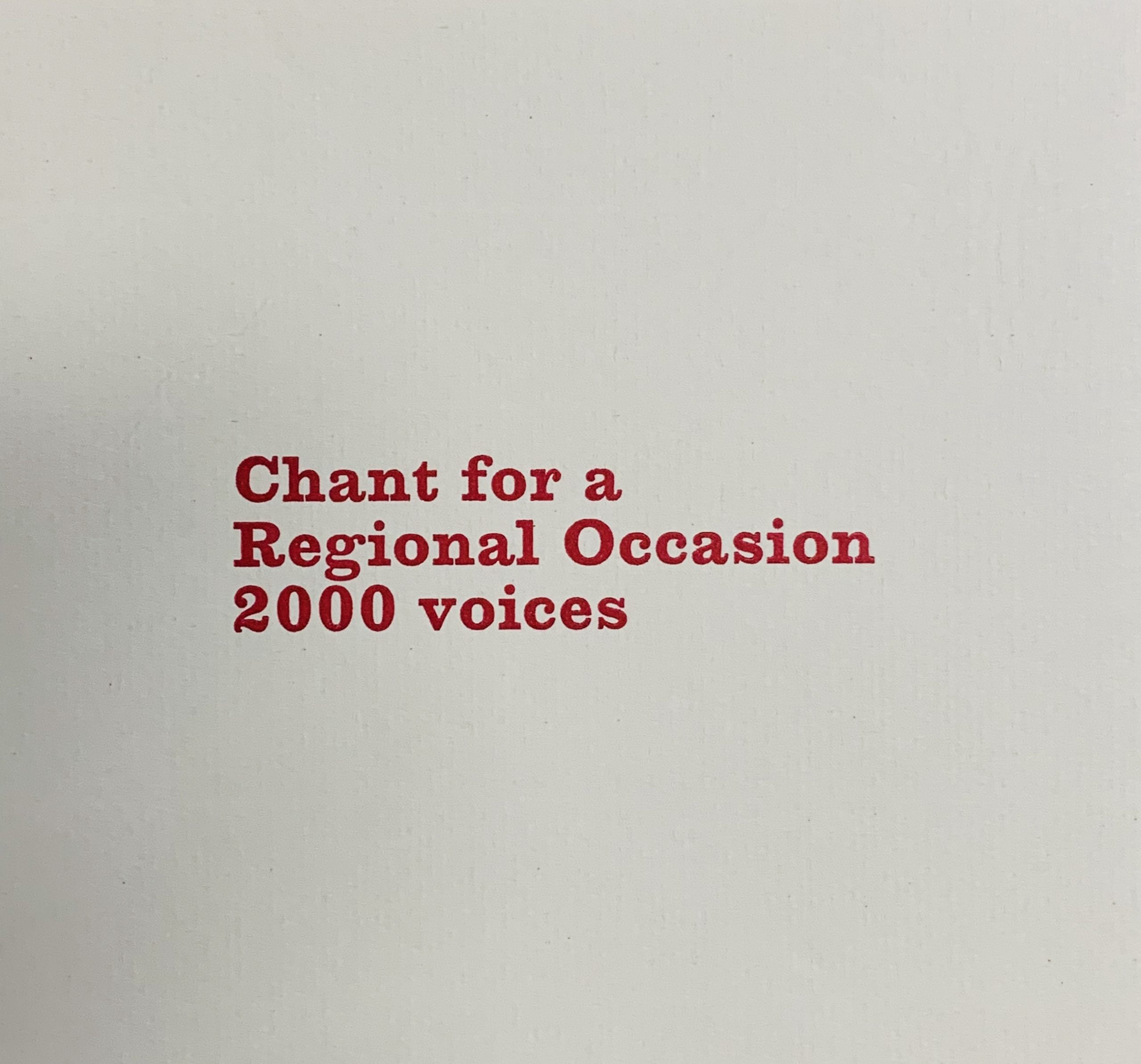 Little Sparta: Wild Hawthorn Press, 1983
14.2 x 15cm, red on white folding offset lithograph. There are 16 panels ten of each with a three word poem - for example

The trios of words are all alliterative within a panel beginning with the same letter. They all also end with a weapon or a reference to fascism. The "chant" is encouraged to be repeated when one gets to the end.
The "Region" here is Strathclyde Region and this is another of Finlay's acidic attacks on their bureaucracy.VG+ condition.
This is categorised as a print by both Murray and the Wild Hawthorn Press but it really is a folding card but for ease we have left it here in the prints section of this online collection. 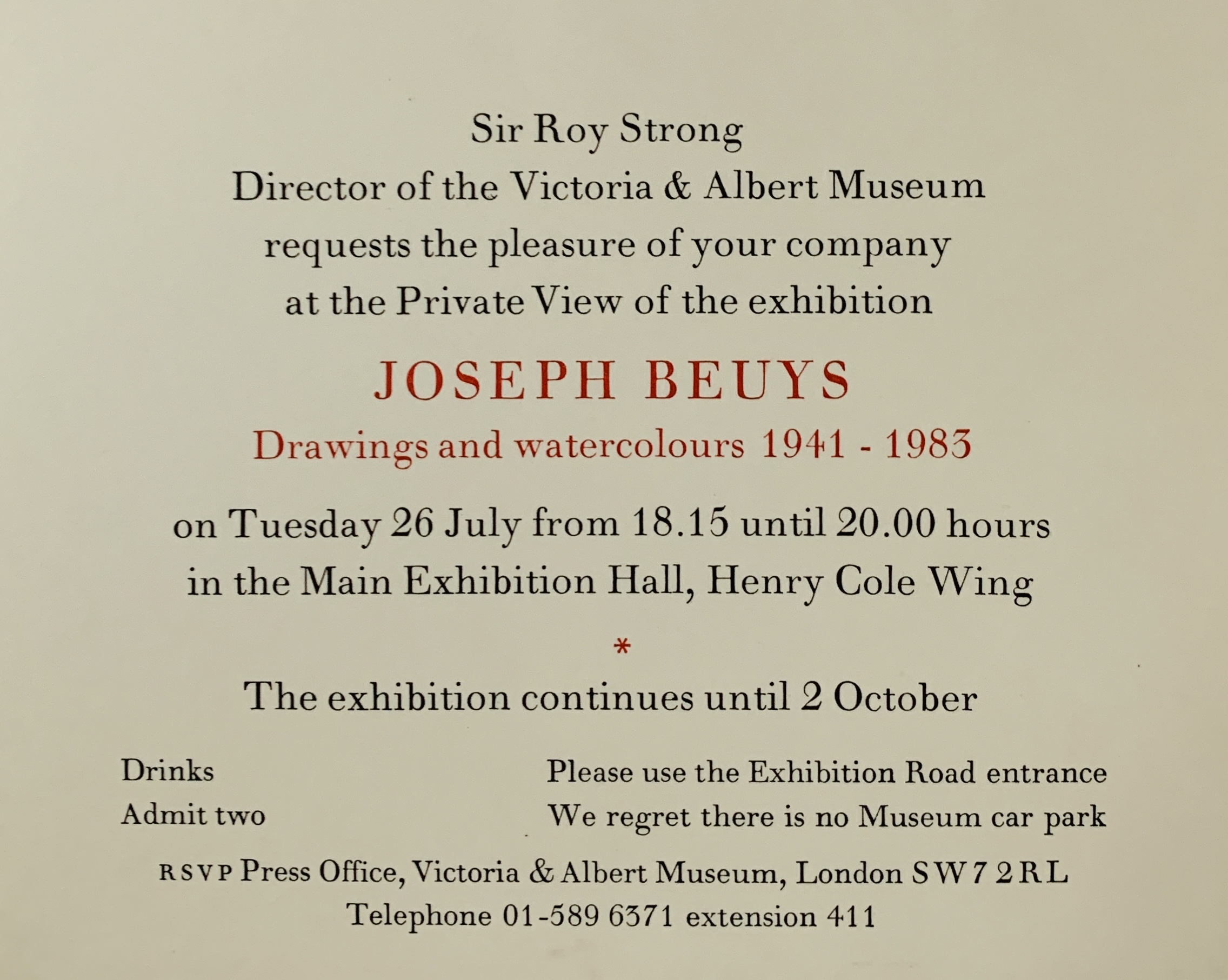 Posted at 19:52h in Artist's Postcards

Little Sparta: Wild Hawthorn Press, n.d.(1983?)
8.4 x 7cm, 8pp single folding card printed on one side only in blue and red on white. The first panel lists the publishing details, the second shows the ship that has reef knots that look like the decorations on the side of the drums of the revolutionary army - the boat is called The Littel Drummer Boy and the panel remembers Bara the martyr, the third panel has the name Viala with a tricolour ribbon - here memorialising the death of the young martyr Joseph Agricol Viala who tried to demolish a bridge while under attack and died calling for Liberty and finally, the text "Hommage A David" who was a third martyr to the Terrorists murdered in his bath. A card in honour of three Republican deaths.
This example is signed "To Janet (Boulton) yours Gary (Hincks)" in blue and red crayon. VG+. 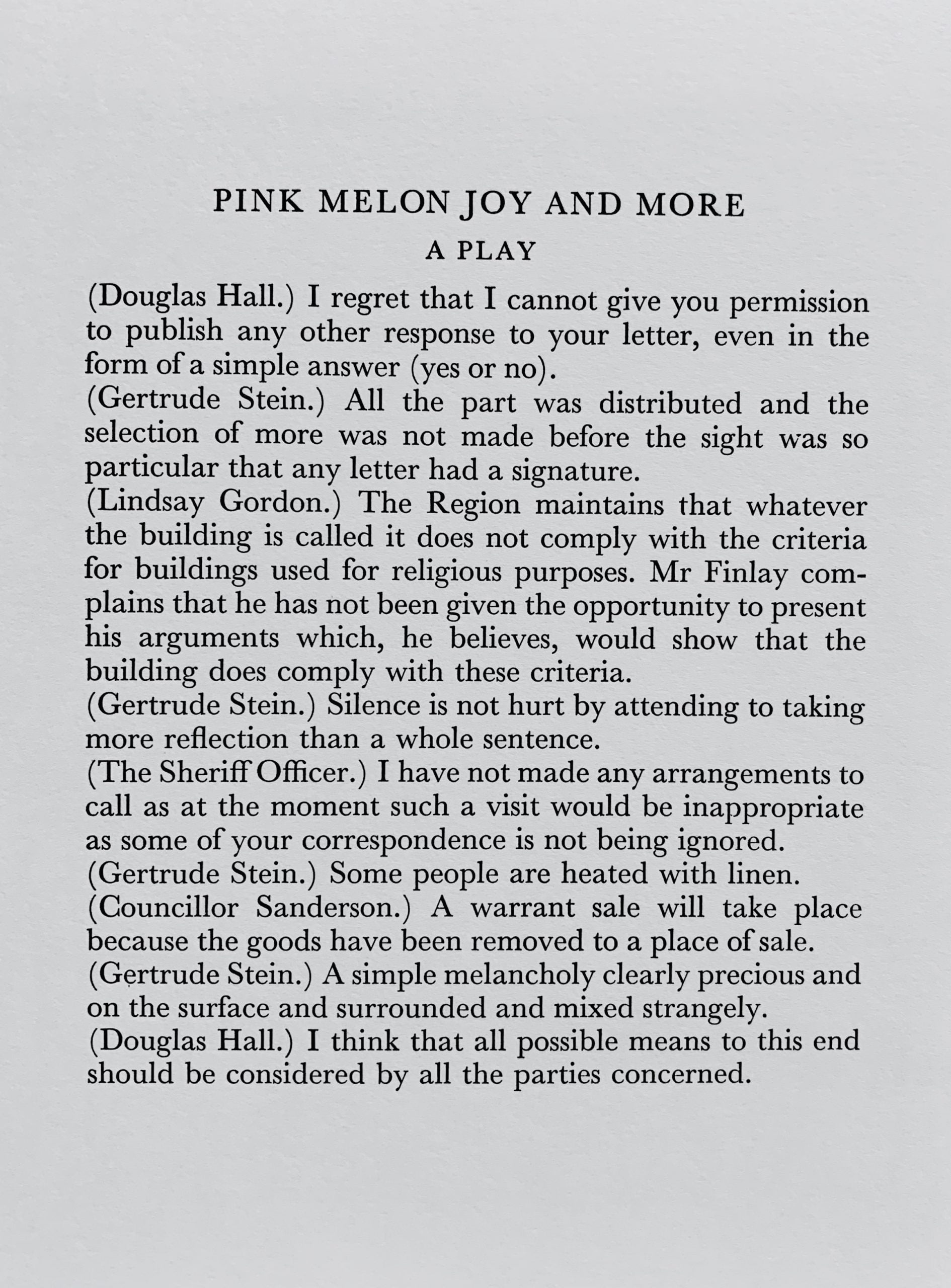 Posted at 22:33h in Artist's Postcards

Little Sparta: Wild Hawthorn Press, 1983
18 x 13.6cm, 1pp. The "play" consists of extracts from letters sent to Finlay from Strathclyde Region and the Scottish Arts Council interspersed with quotations from Gertrude Stein. Stein's texts (due to Finlay's clever selection) mock the official texts that proceed each. An ironic and somewhat biting attack on Finlay's enemies which is at the same time comic. VG+ 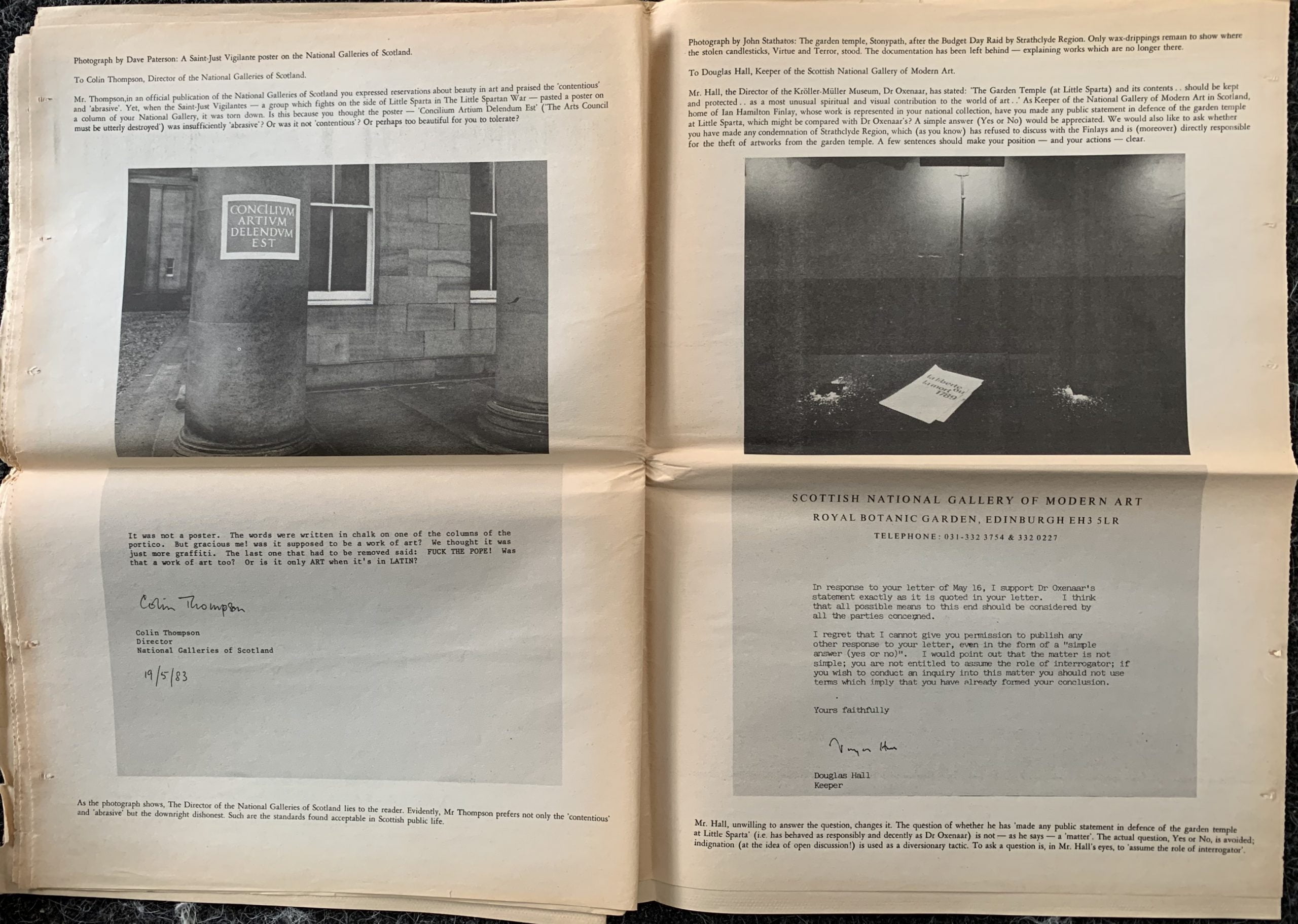 Noordwijk: MW Press 28, July 1983
38 x 28cm, 32pp plus 8pp smaller insert. Artist's journal in the form of a tabloid newspaper which here has an 8pp contribution by Finlay documenting the first of the Little Sparta Wars. Various letters and statements from participants in the war from both sides are joined with 6 photographs by Dave Paterson. The paper is fragile due to being very cheap and is unavoidable browned. Folded for storage. Very scarce. 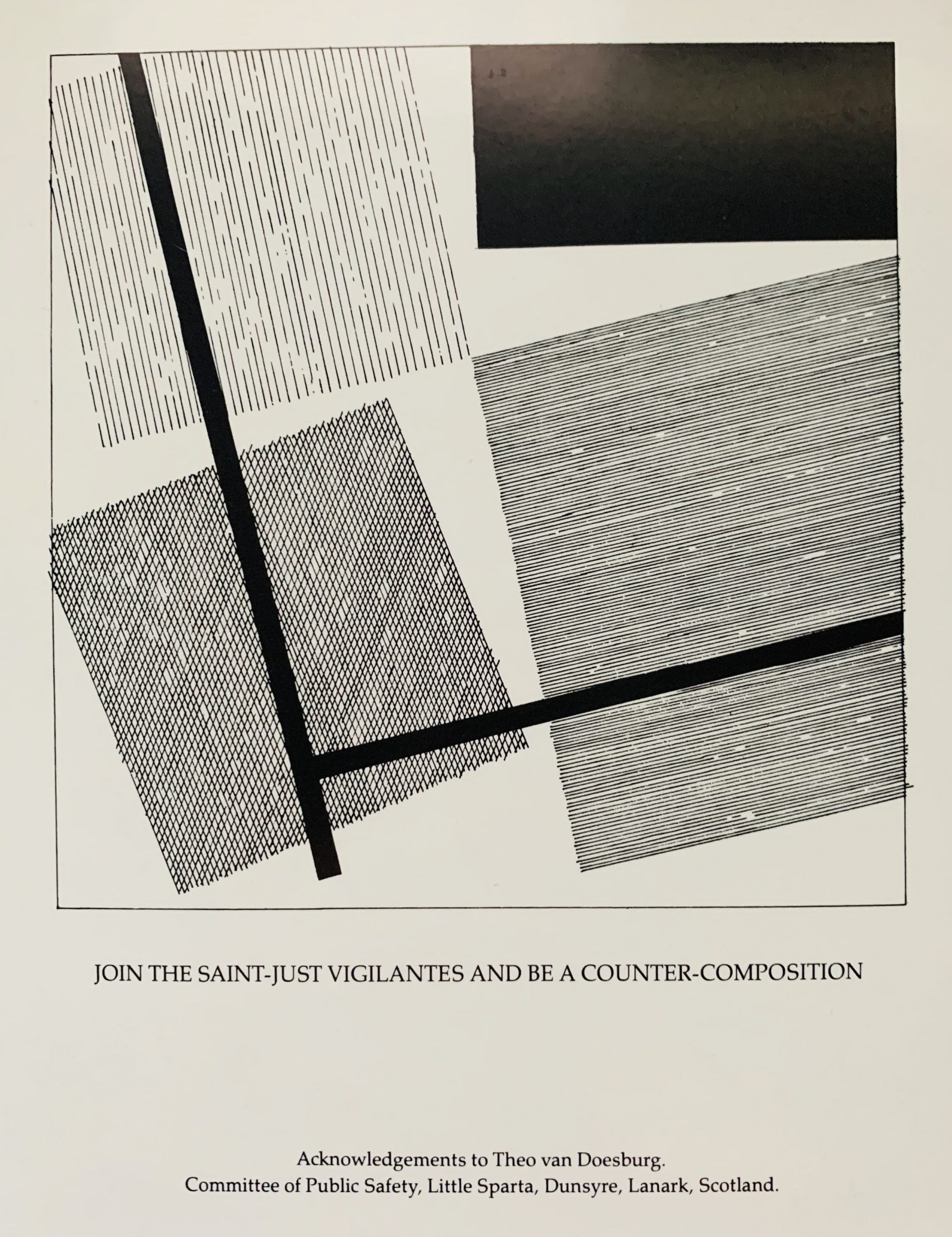 07 Jul JOIN THE SAINT-JUST VIGILANTES AND BE A COUNTER-COMPOSITION. 1983.

Posted at 15:53h in Artist's Postcards

Little Sparta: Wild Hawthorn Press, 1983
16.4 x 12.6cm, 1pp, black on white card. The illustration is a parody of a work by Theo van Doesburg, who was a leading figure in the De Stijl abstract group. The text "Join the Saint-Just Vigilantes and be a counter-composition" references a series of paintings by the artist where the shapes are placed on the diagonal. The inference being that the Saint-Just Vigilantes are awkward and difficult, not on the square. VG+.

Posted at 12:00h in Artist's Postcards

Little Sparta: Wild Hawthorn Press, 1983
19.3 x 6.6cm, 1pp, red on white card. The illustration shows a series of drawings of French revolutionary style-drums with the text "Join the Saint-Just Vigilantes". The card is a rallying call for support much like a drum-roll might be. VG+. 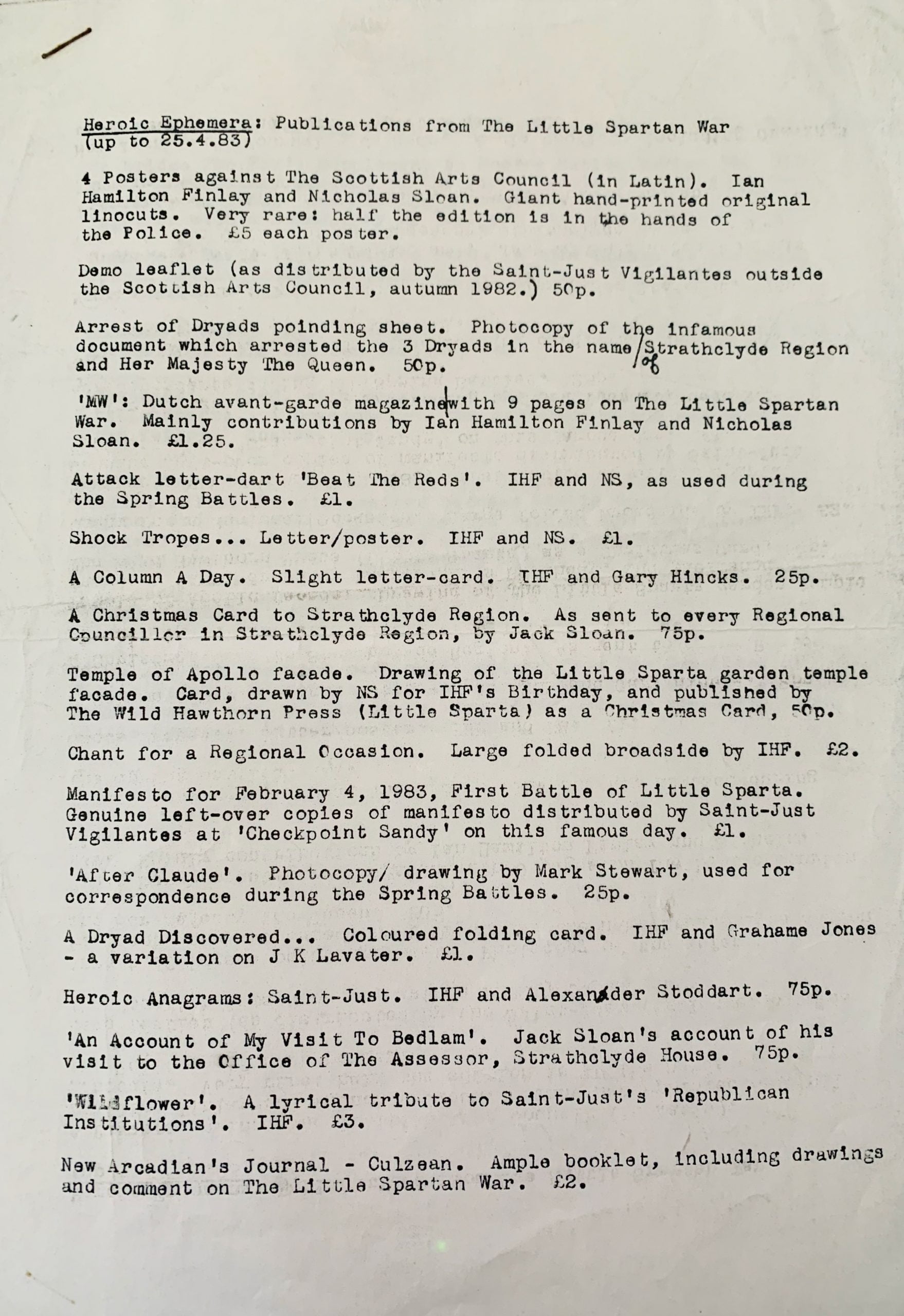 Posted at 10:30h in Miscellany

Posted at 14:26h in Artist's Postcards

Little Sparta: Wild Hawthorn Press, 1983
11.6 x 7.6cm , 10pp (single folded sheet printed on one side only) brown on white artist's card with two photographs by Andrew Griffiths of a tree that had recently been planted and another a fully grown - both have tree-column sculptures at their bases. The poem in the middle section reads:
A PLACEMENT
obeisance
and an excerpt from Finlay's "Detached Sentences on Gardening" which clarifies the idea that some items in a garden are like those of societies - some need to be fixed (in the sense of solidified) so that others can be placed (strategic decision-making).
The final section notes the Tree Column-Bases to be found in Little Sparta - one "Lycurge" and the other Saint-Just. The former was a Greek law-maker and the latter the stern deliverer of laws from the French Revolution. Finlay differentiates between the two by suggesting the Greek was more stable and civil while the latter more chaotic and dangerous. VG+. 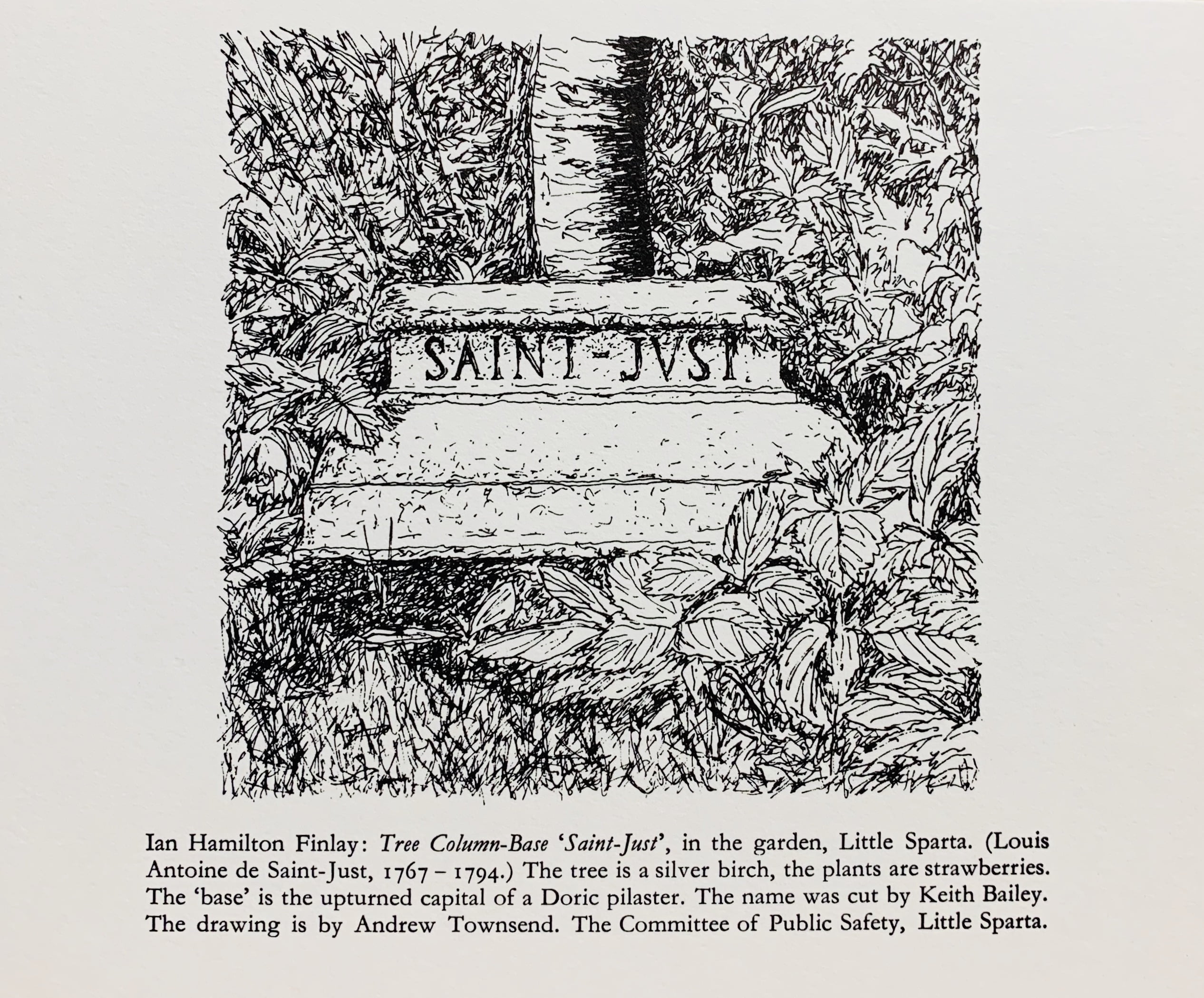 Posted at 22:38h in Artist's Postcards

Little Sparta: Wild Hawthorn Press, 1983
12.4 x 15.2cm, 1pp. A drawing of an installation of one of Finlay's Tree Column-Base dedicated to the French revolutionary Saint-Just in the garden of Little Sparta. Finlay notes that the tree is a Silver Birch (which has a noble and straight growing trunk) and that the plants around the base are strawberries (a passionate fruit one might argue due to colour and flavour). The base was an unturned capital of a Doric pilaster. Together this represents the character of the young incorruptible. The drawing was by Andrew Townsend. VG+.