Little Sparta: Wild Hawthorn Press, 1985
15 x 10.5cm, 4pp (made of a single folded sheet printed one-side only). A hand-written letter on printed Ulysses Was Here stationery (one of the few times we have seen the printed letterhead used in such a folded manner) from Sue Finlay to John Stathatos letting the latter know that the Wildflower Vases are available for £100 each. VG+. 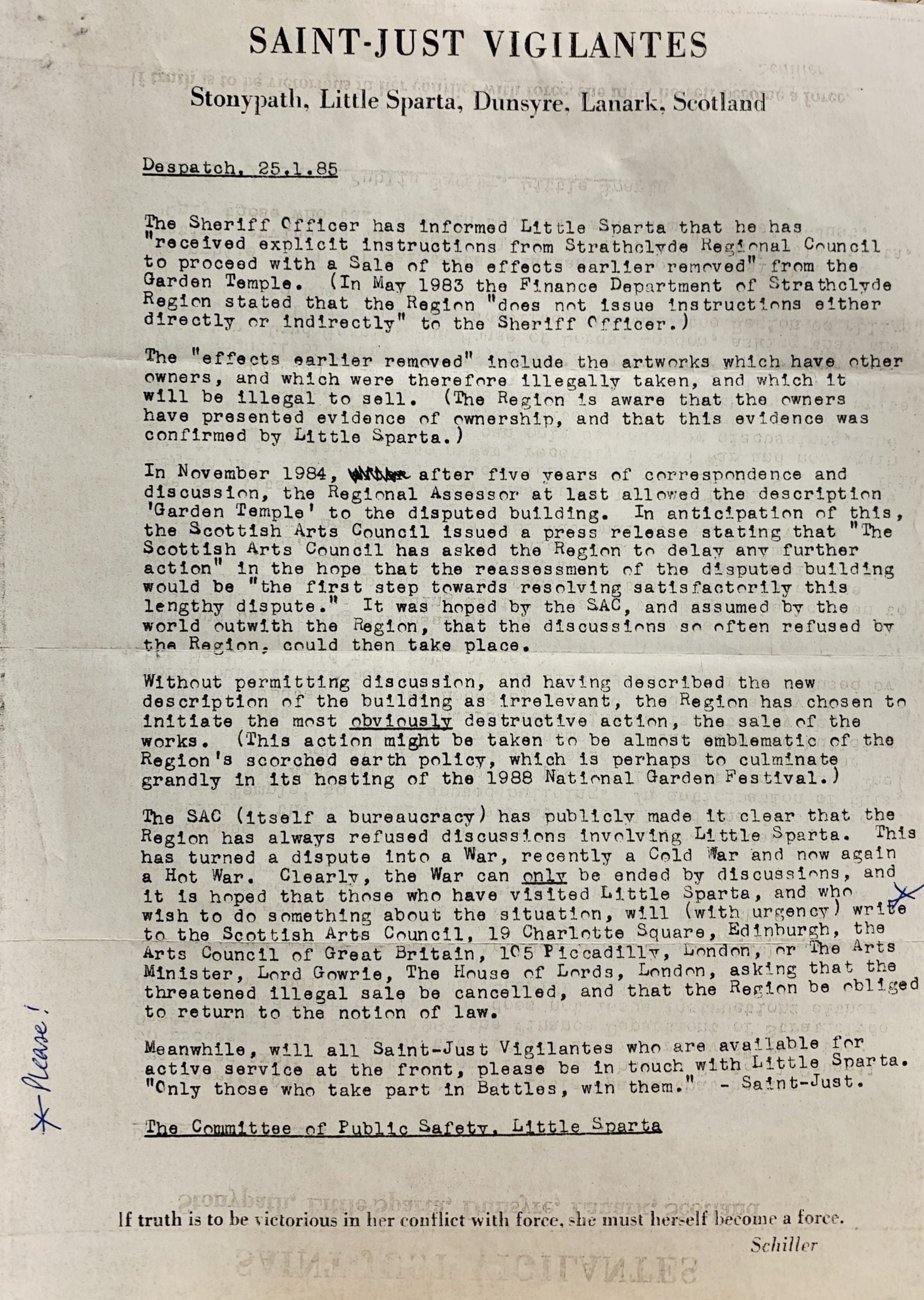 25 Jan LETTER FROM THE COMMITTEE OF PUBLIC SAFETY, LITTLE SPARTA TO THE SAINT-JUST VIGILANTES. 25TH JANUARY 1985.

Little Sparta: Finlay, 25th January 1985
An original vintage xerox 30 x 21cm, 1pp with a round robin letter from Finlay to all of the Saint-Just Vigilantes.
The letter lets the Vigilantes know that the Sheriff Officer had informed Little Sparta that he "has received explicit instructions from Strathclyde Regional Council to proceed with a Sale of the effects earlier removed" from the Garden Temple.
Finlay explains that some of the artworks removed had other owners and were therefore illegally taken. Finlay explains the role of the Scottish Arts Council (a role he is unhappy with) as a potential mediator but notes their failure to take that role. He asks supporters to write to the SAC and others to demand that the illegal sale of works be cancelled and that the "Region be obliged to return to the notion of law."
The letter ends with "Meanwhile, will all Saint-Just Vigilantes who are available for active service at the front, please be in touch with Little Sparta. "Only those who take part in Battles, win them." - Saint-Just. 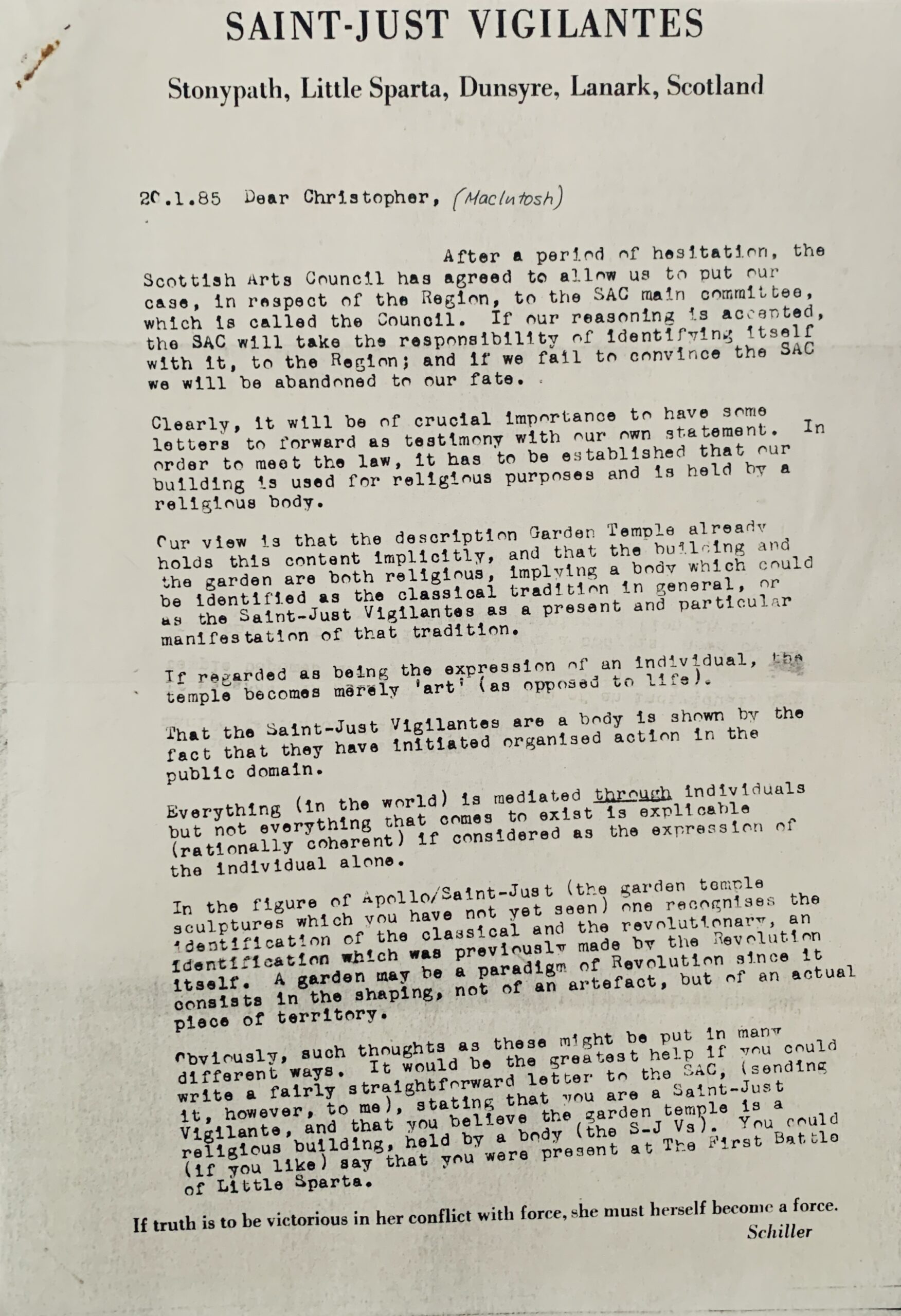 20 Jan VINTAGE XEROX OF A LETTER FROM FINLAY TO CHRISTOPHER MACINTOSH. 1985.

Little Sparta: Saint-Just Vigilantes (Finlay), 1985 30 x 21cm, 2pp (recto only) vintage xerox of a letter from Finlay to Christopher MacIntosh noting that the Scottish Arts Council had (after earlier requests) agreed to hear Finlay's case for them to support his actions against the Strathclyde regional Council. Finlay asks MacIntosh as one of the Saint-Just Vigilantes to write to the SAC stating that the latter believes the Garden Temple to be a religious building and to return the letter to Finlay. The letter also has short passages by Finlay where he states clearly his belief that the building is clearly religious in nature and pointing to the equivalence of Apollo and Saint Just as both revolutionary and classical. "A garden may be a paradigm of Revolution since it consists in the shaping, not of an artefact, but of an actual piece of territory." Slight rust around where a staple has been removed in the past else VG. ...

Little Sparta: Wild Hawthorn Press, 1985
23 x 23cm (unfolded size), 2pp sheet of printed paper designed to be folded into a paper airplane shape and thrown.
The text inside: "BEAT THE REDS WITH THE WHITE WEDGE: CORRESPOND!" adapts the Russian revolutionary slogan from the famous painting by Lazar Markovich Lissitzky, suggesting writing letters may be a radical response to the attacks on Little Sparta by the Strathclyde Region. It should be noted that the dart is supposedly published by the "Committee of Public Safety" which was the centralised mechanism by which Robespierre and Saint-Just controlled the Terror of the French revolution. This is a mailed example to Ronnie Duncan with stamp and frank. Murray lists this as a card - which is debatable we have decided to categorise it as a letter/document because of it's intent as a campaigning item. VG+.