Little Sparta: Wild Hawthorn Press, 1986
18.3 x 12cm, 20pp and card covers along with flower pattern dust jacket and printed tipped on label. The full title of the book is "Detached Sentences on Weather In The Manner of William Shenstone".
Shenstone was not only an 18th century poet but also an influential early estate gardener. The texts are a series of aphorisms by Finlay which are presumably in the style of the earlier poet and all consider the importance of the weather - a subject very important to both gardeners and British people. Two examples of these sayings are:

"The Late Night Shipping Forecast is a kind of High Church Weather Service for radio listeners."
Or
"The Greeks before Troy feared hostile weather as much as hostile Trojans."

One of only 200 such books printed at Christmas as presents to friends and colleagues. Two small vignettes by Jo Hincks. VG+. 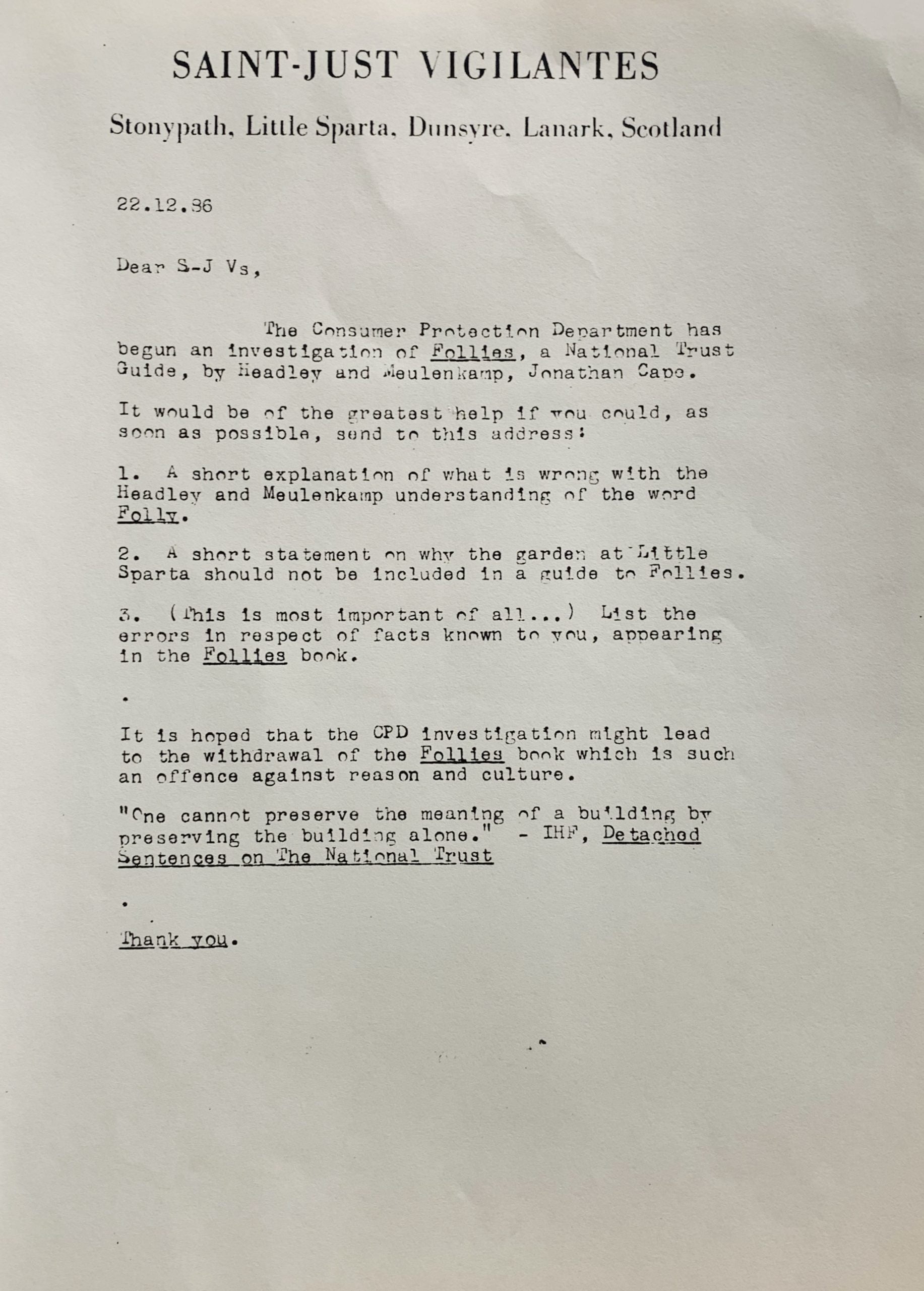 22 Dec LETTER FROM FINLAY TO THE SAINT-JUST VIGILANTES. 22nd DECEMBER 1986.

Little Sparta: Finlay, 22nd December 1986
An original vintage xerox 30 x 21cm, 1pp with a round robin letter from Finlay to all of the Saint-Just Vigilantes explaining the the Consumer Protection Department has begun an investigation of "Follies: a National Trust Guide" by Headley and Meulenkamp and published by Jonathan Cape. Finlay asks if his supporters can write to the CPD with letters explaining why Little Sparta is not a Folly and why it should not be included in such a guide. Finlay hopes the investigation may lead to the withdrawal of the Follies book. The letter ends with one of Finlay's "detached sentences on the National Trust":
"One cannot preserve the meaning of a building by preserving the building alone." 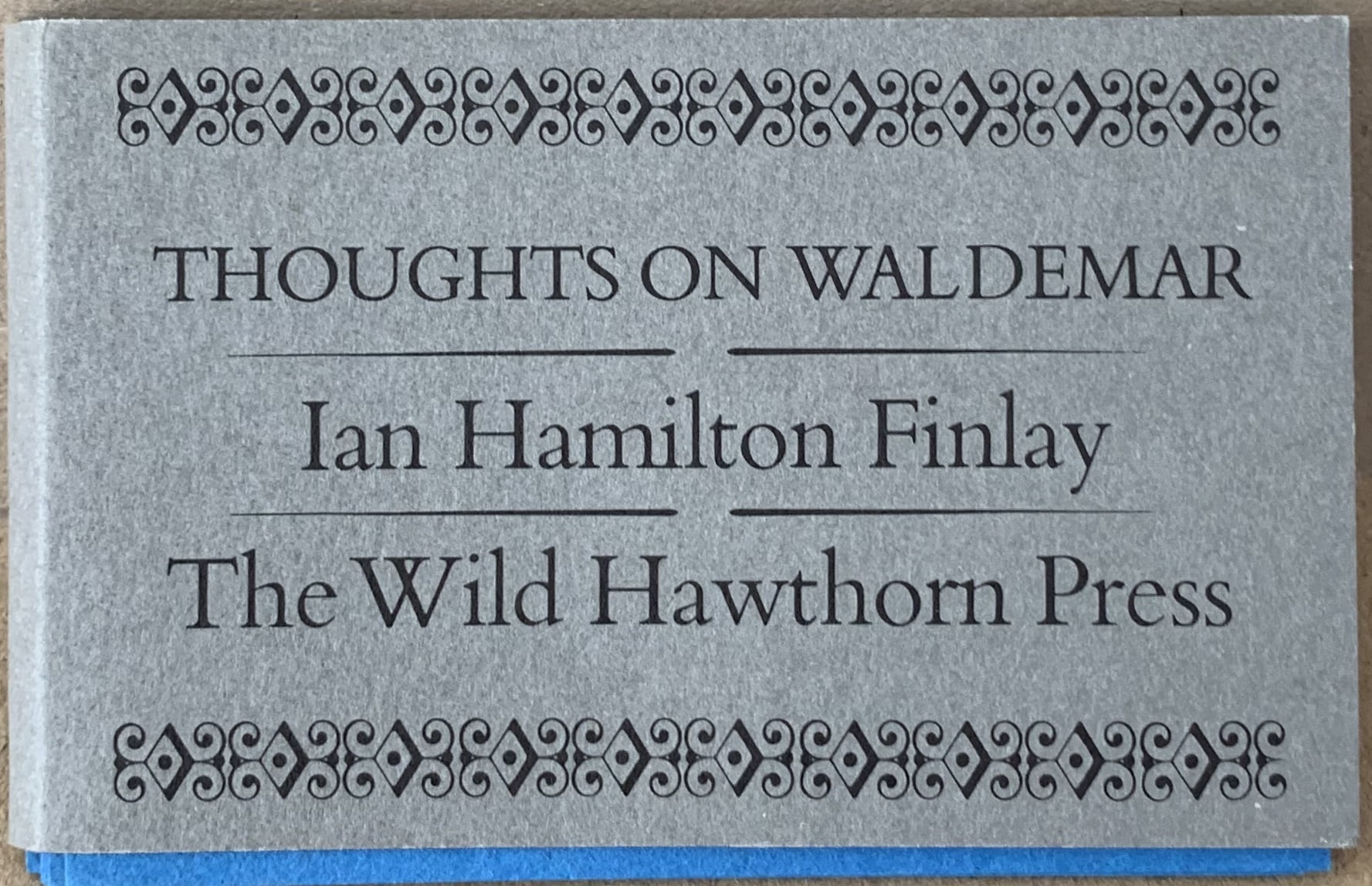 Little Sparta: Wild Hawthorn Press, 1986
5.5 x 8.6cm, printed outer folder content of sixteen 5.5 x 8.6cm, 1pp cards printed black on deep blue. Each card is attack of the hack art critic Waldemar Januszczak who had upset the poet by giving him a poor review (Finlay also fell out with the priggish and ignorant Brian Sewell for which I love the poet even more). The cards all attack with vigour the Guardian' pet critic - "Being outspoken was his claim to shame" is one example. Finlay wounds. Januszczak later tried to retaliate with his own cards (see elsewhere in this collection for those items) but all they did was to parody Finlay's style of attack and frankly failed to hit the target (one has an image of a man giving a Hitler salute - actually taken from early Anselm Kiefer - which is crass). These cards are in VG+ condition in like folder.

15 Dec SOMEWHERE IN THE WOOD. 1986. WITH EXTENSIVE GREETING BY FINLAY. FIRST EDITION.

Posted at 23:30h in Artist's Postcards 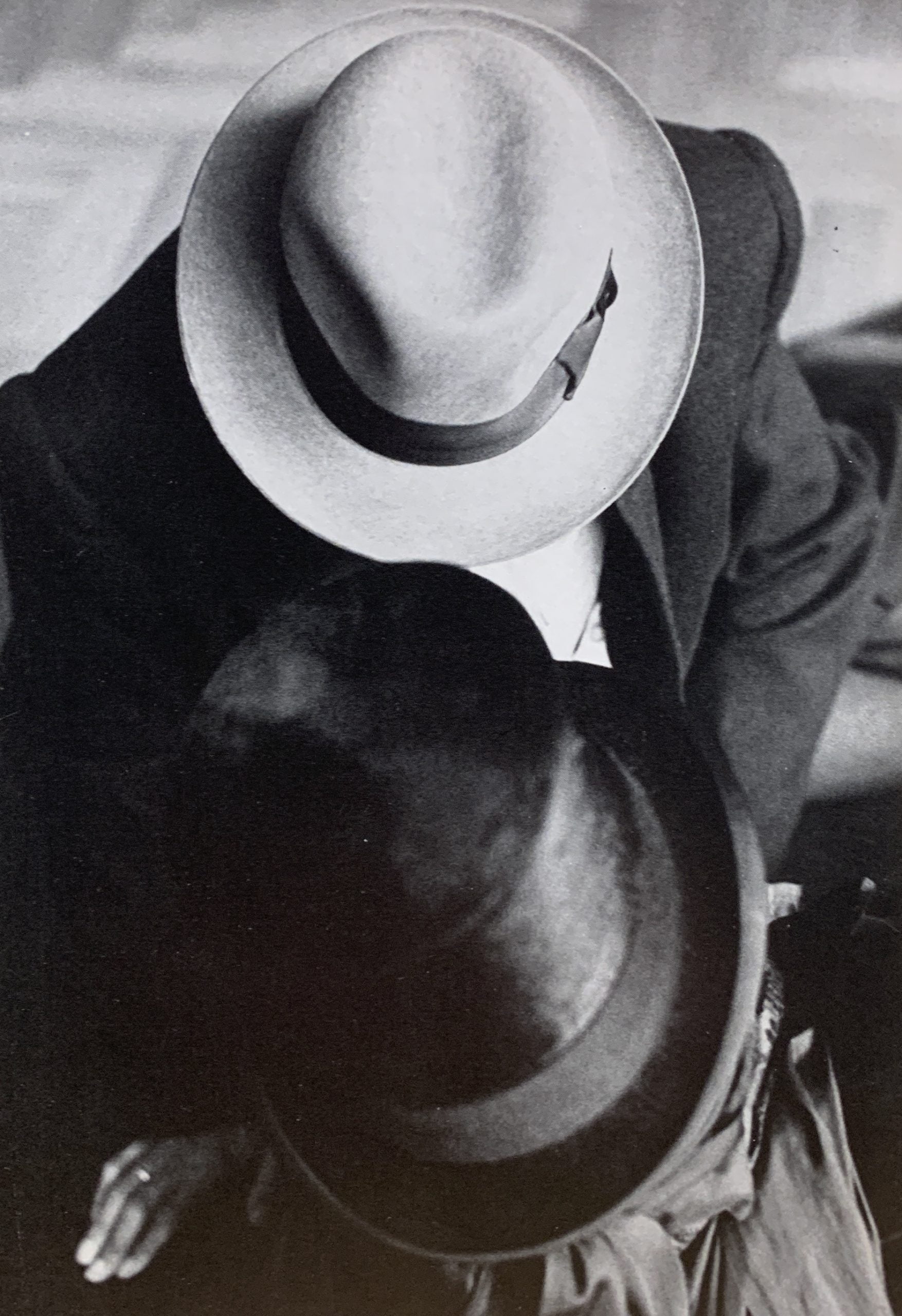 Bonn: Raum 41, 1986
21 x 15cm, 2pp announcement leaflet for a photographic edition by Franz Fischer of an image of Beuys and James Lee Byars shown from above to only see their respective headgear - Beuys's hat and Byars' top hat. Posthumous to Beuys of course but not Byars. VG+.