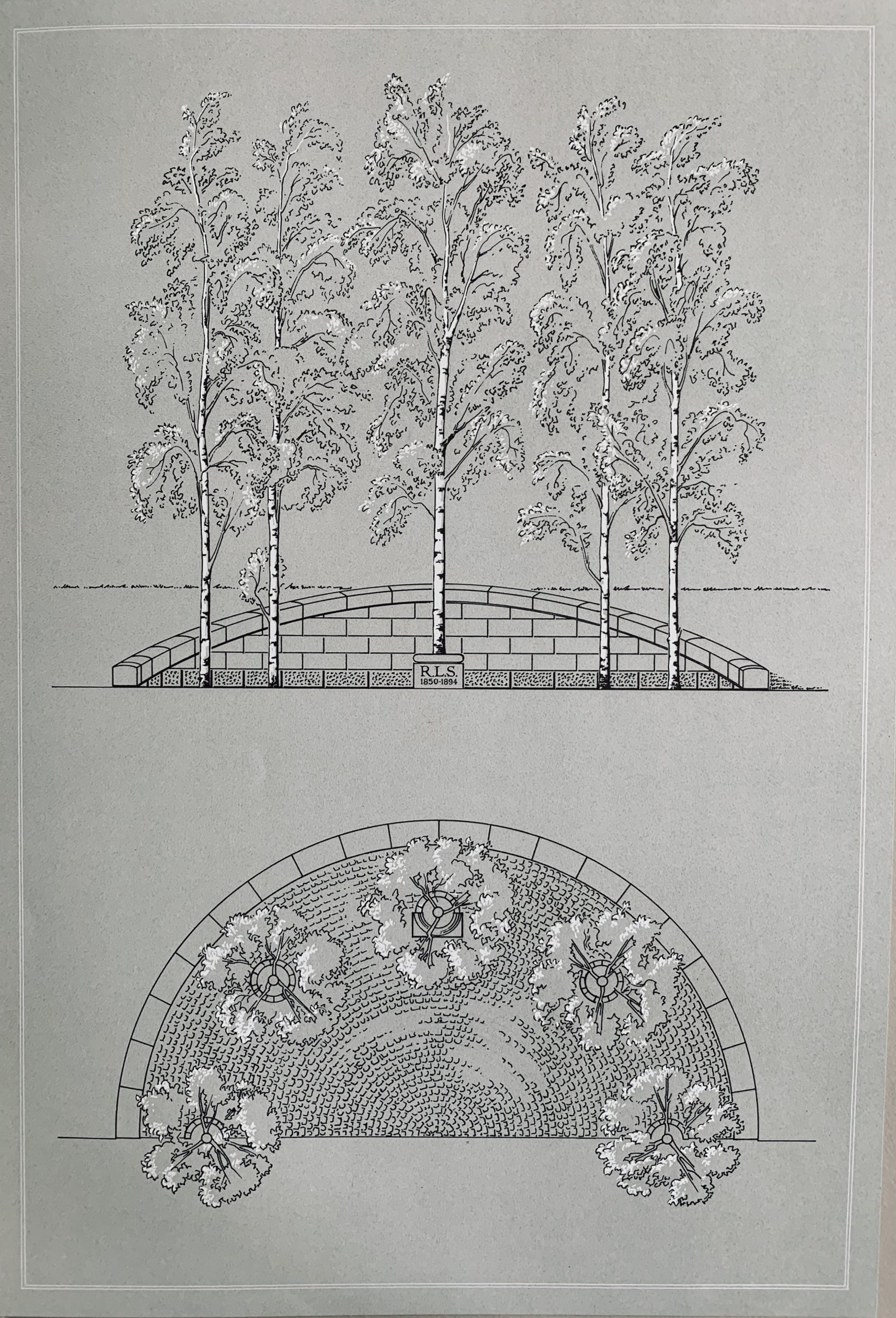 Little Sparta: Wild Hawthorn Press, 1987
58.0 x 39.5cm, offset lithograph print in original printed folder. The putative monument's elevation and plan by Gary Hincks is printed one above the other.
Finlay's proposal for the work included five straight stemmed silver birch trees planted amongst cobbles and a "tree-column base" at the bottom of the middle tree: tree-column bases were a sculptural innovation by Finlay where the tree could continue to grow (the base was a semi-circle allowing expansion to the back) but the base of the tree would have a permanent stone marker. The base in this proposal was planned to have the letter's R.L.S. - the capitals that Robert Louise Stephenson was often known by.
Finlay regarded the use of the birches symboling of Stephenson's interest in the Scottish landscape and the neo-classical base as a reference to RLS's childhood association with Edinburgh's New Town. The installation was eventually installed in Princes Street Gardens but the birches didn't flourish and had to be later replaced slightly incorrectly.
One of 200 copies released - VG+. 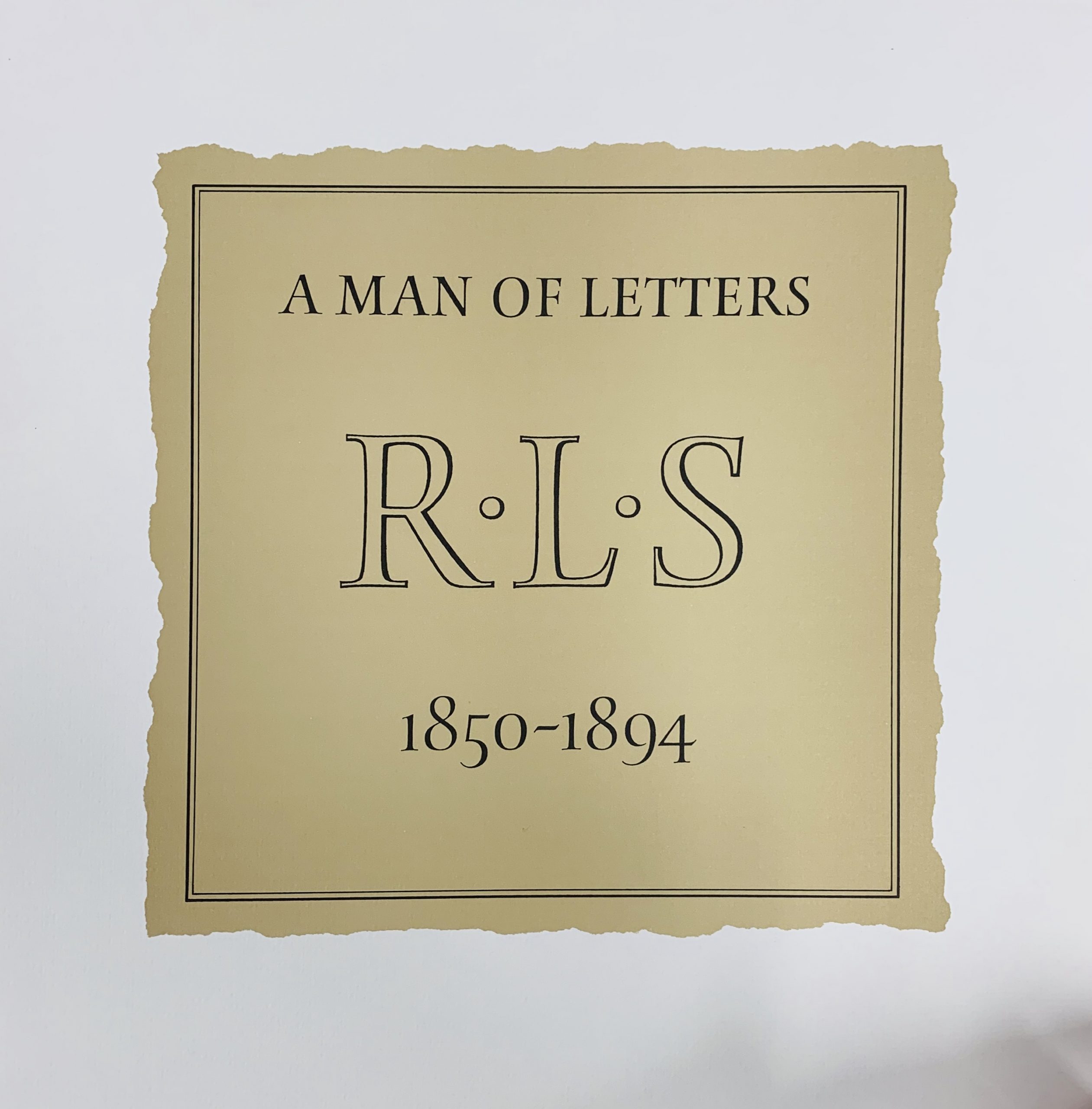 24 Mar A PROPOSAL FOR THE ROBERT LOUIS STEVENSON CLUB. 1987.

Little Sparta: Wild Hawthorn Press, 1987
27 × 27cm, black and cream offset lithograph on thick paper in original printed paper folder.
Finlay's proposal for a monument to the Scottish writer was a plaque on rough stone to be set amongst a grove of birch trees. The plaque was to have a "one word poem" on it - "A MAN OF LETTERS. / R.L.S./1850 - 1894". The obvious wit being the use of the capital letters RLS which Stevenson was often referred to by reflected by the term "man of letters" which means someone involved in the literary world.
Fine in like folder.
Unlike some of Finlay's proposals this work was installed in 1989 in Edinburgh's Princes Street Gardens but the original birch trees died and were replaced.
The Public Monuments and Sculpture Association Edinburgh Sculpture Project notes: "Unfortunately, the original birches did not thrive, and were replaced a few months later so that the tree does not line up with the base as Finlay intended. Here, the classical tradition of architecture is returned to its roots in the tree." Still it is one of the very best of Finlay's public art works (unlike the awful fruit baskets at Hunter's Square at the Tron Church only a mile away)
... 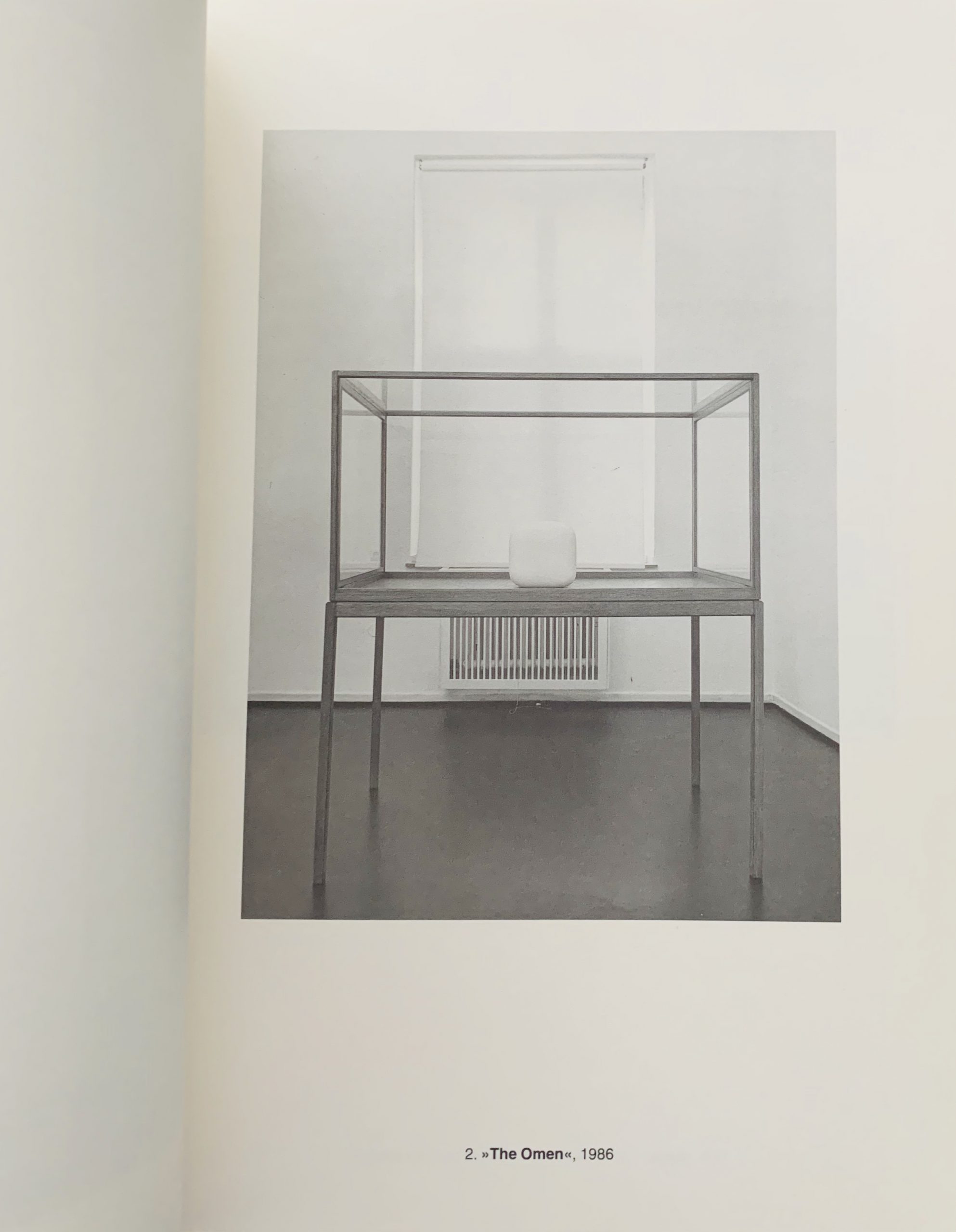 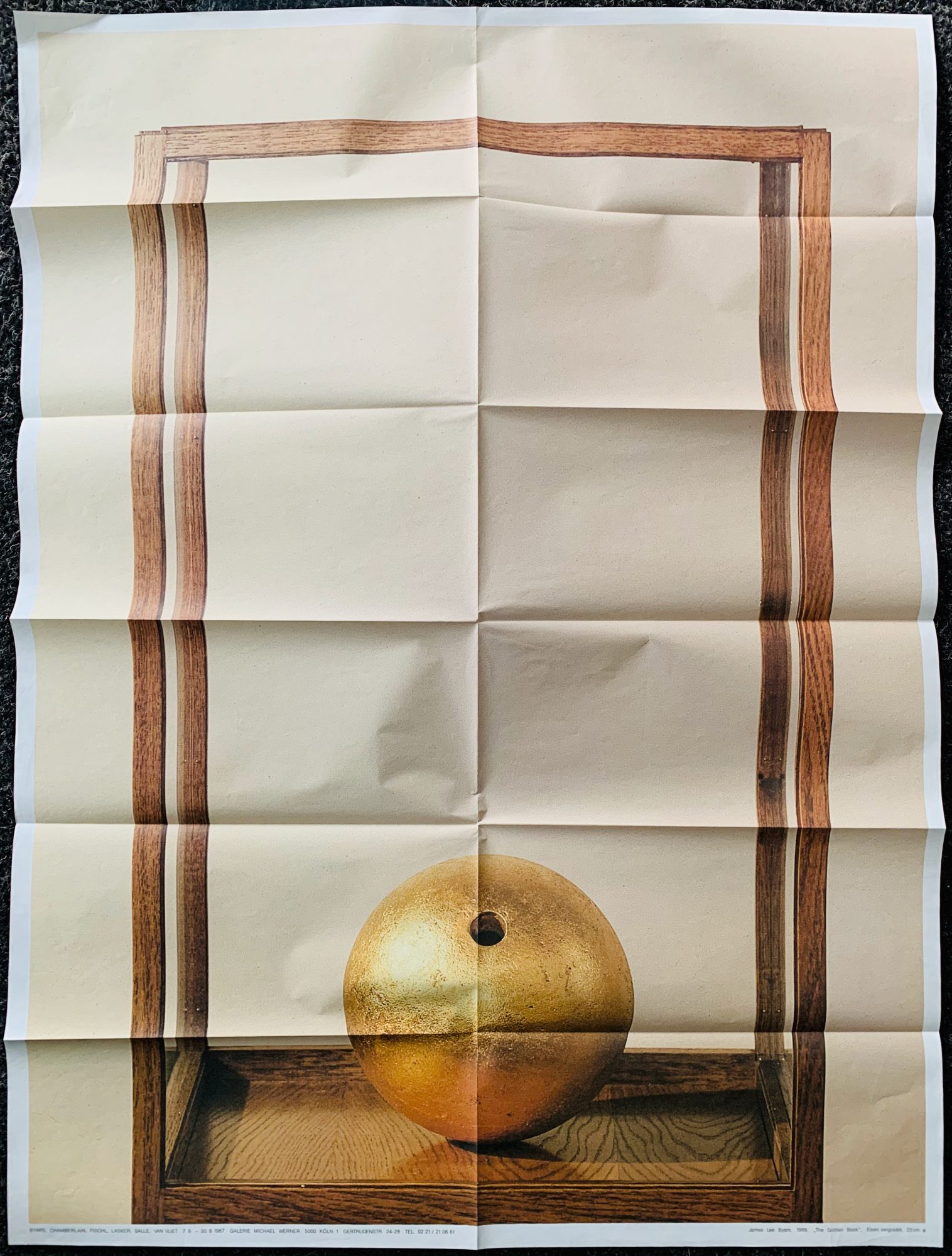 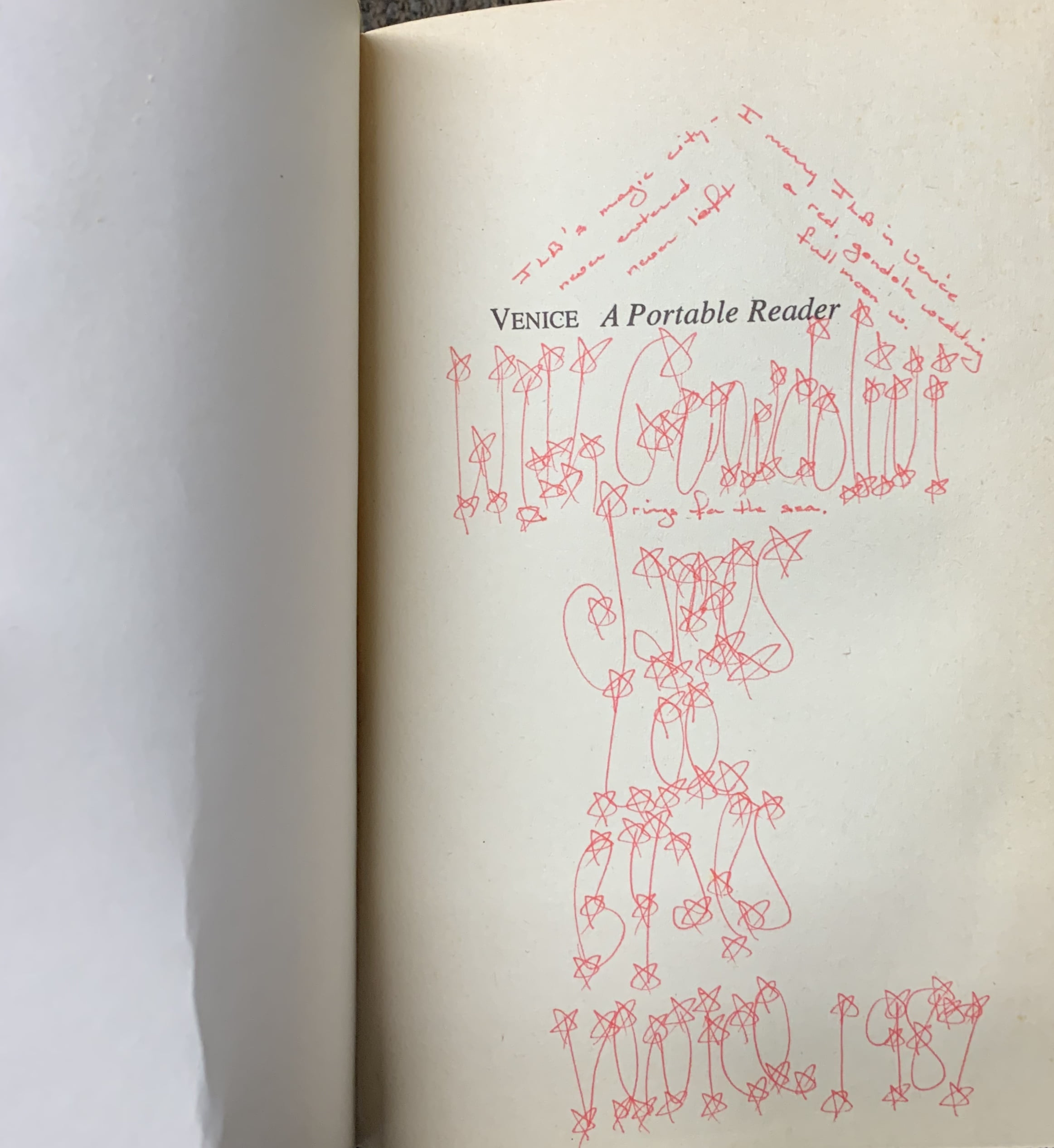 NYC: Frontier Books, 1987 21 x 13.6cm, 242pp. Original wrappers. A book that contains texts about Venice where Byars purchased the book. Inside Byars has drawn a number of small motifs and texts over several pages. The first page has the text in red ink hand written by Byars: “JLB’s magic city - never entered never left/ I marry JLB in Venice a red gondola wedding full moon” And below in larger starry letting “ **** Gondalini/ rings for the sea” and “James Lee Byars Venice 1987” On the second page there are eight small sketches of geometric shapes (with stars) which might be sculptures and a large text “ The Blue Path” again in starry lettering. An unique work by the artist given as a gestural gift and showing his love of the Italian city. Slight wear to wrappers (predating Byars appropriation) else VG+.... 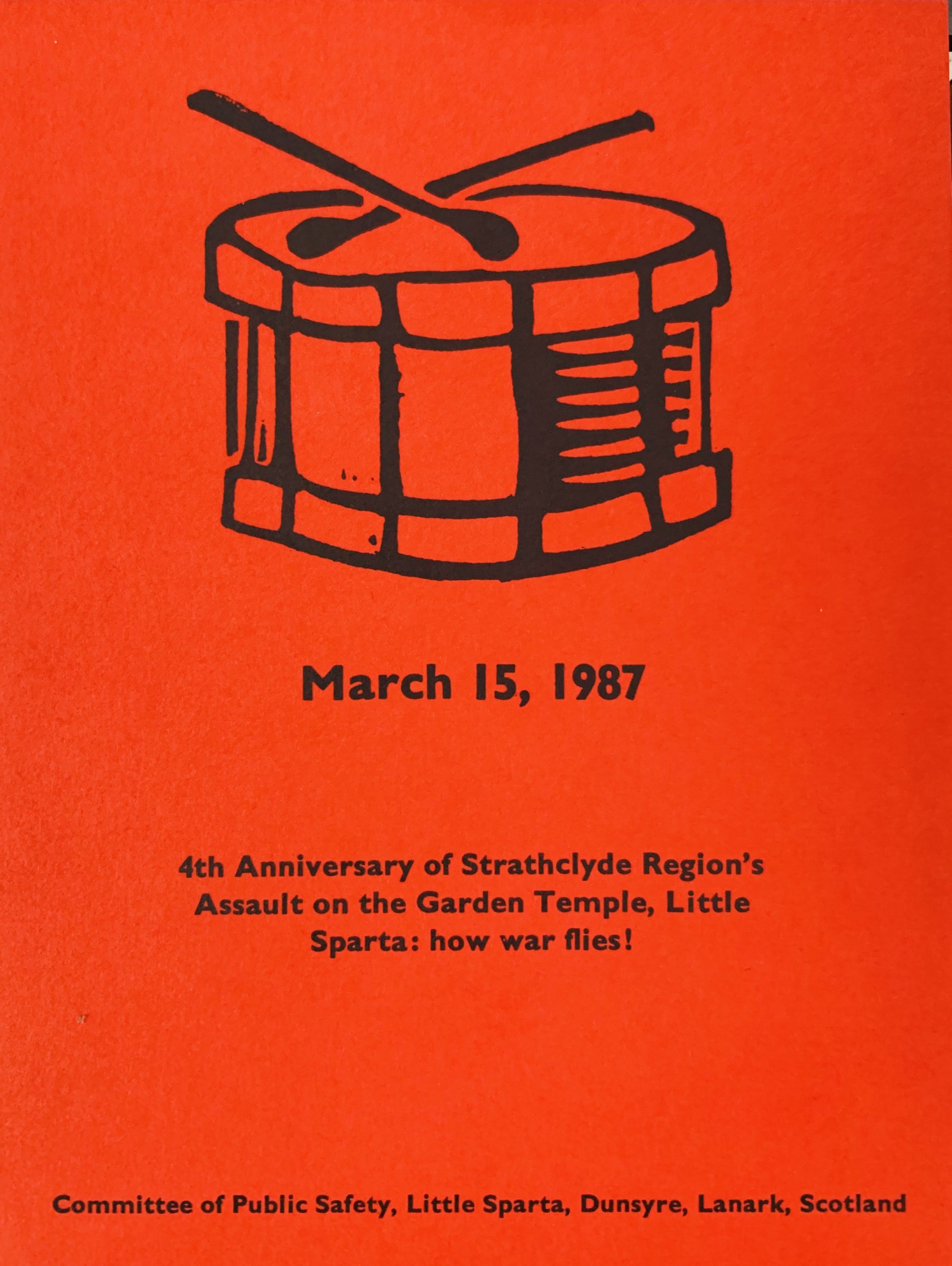 Posted at 21:11h in Artist's Postcards 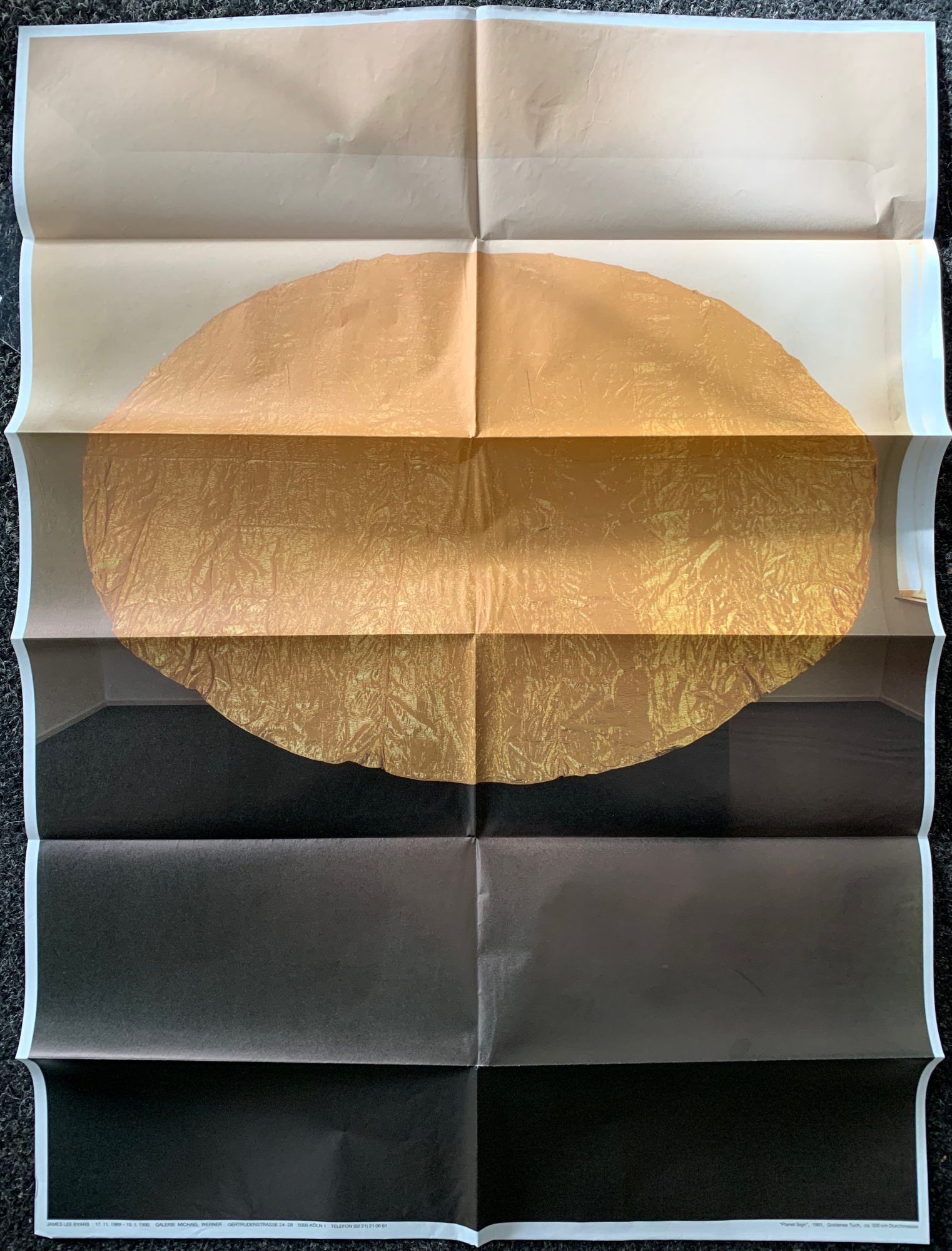 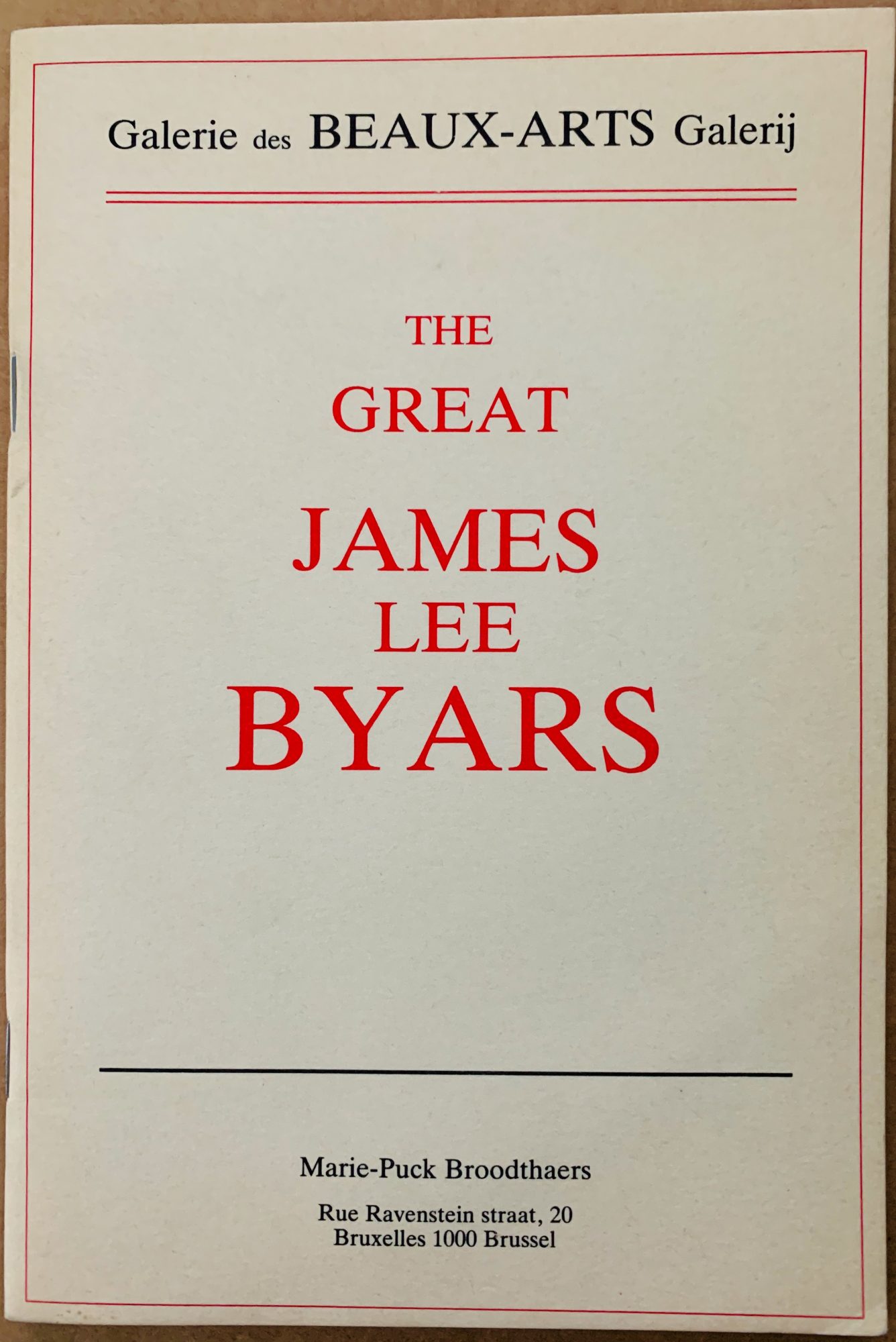 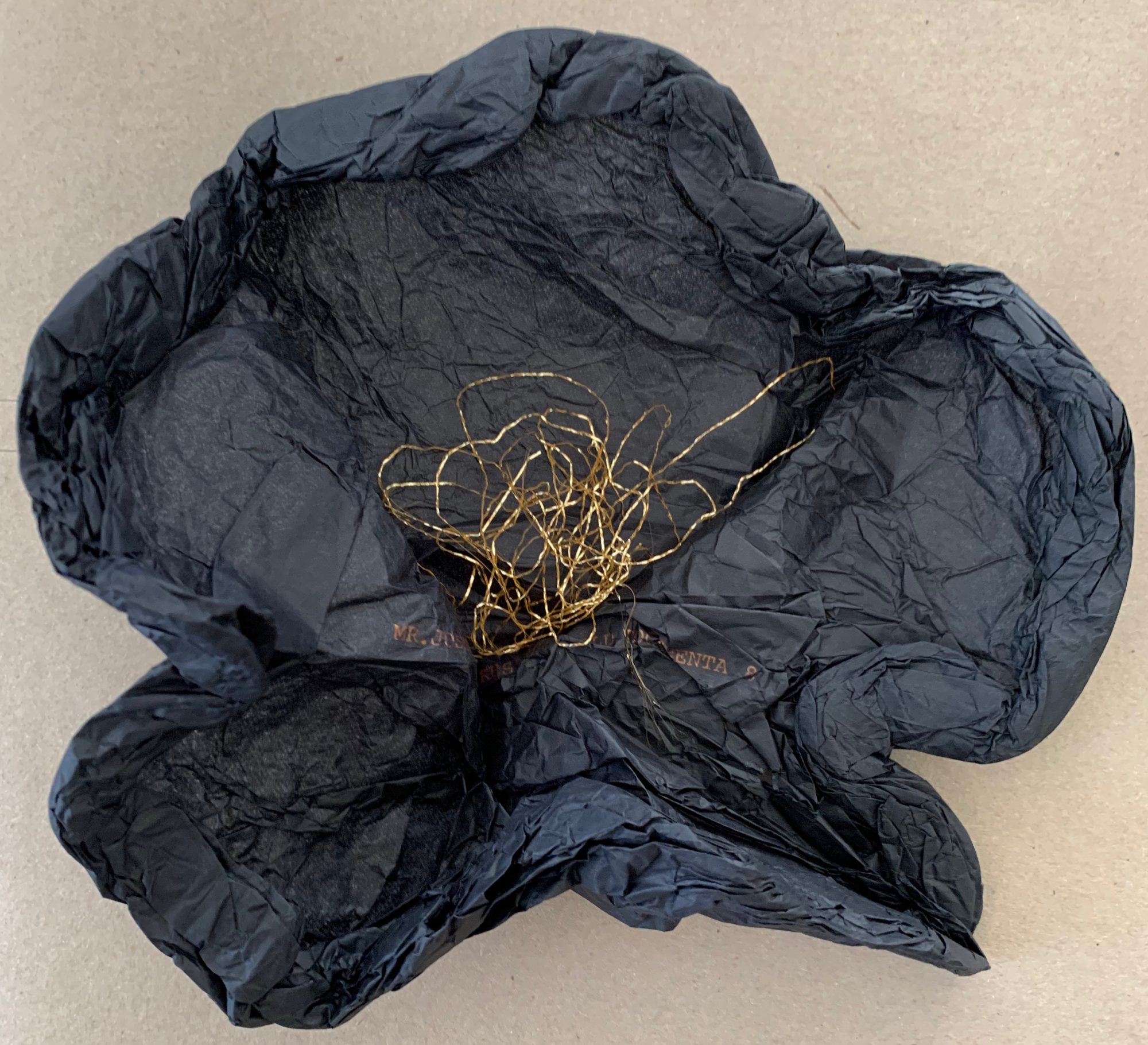 Brussels: Galerie Marie-Puck Broodthaers, 1987 19 x 25cm crumpled sheet of black paper with the title text printed in red with a gold thread enclosed in the wrinkled sheet. As issued.... 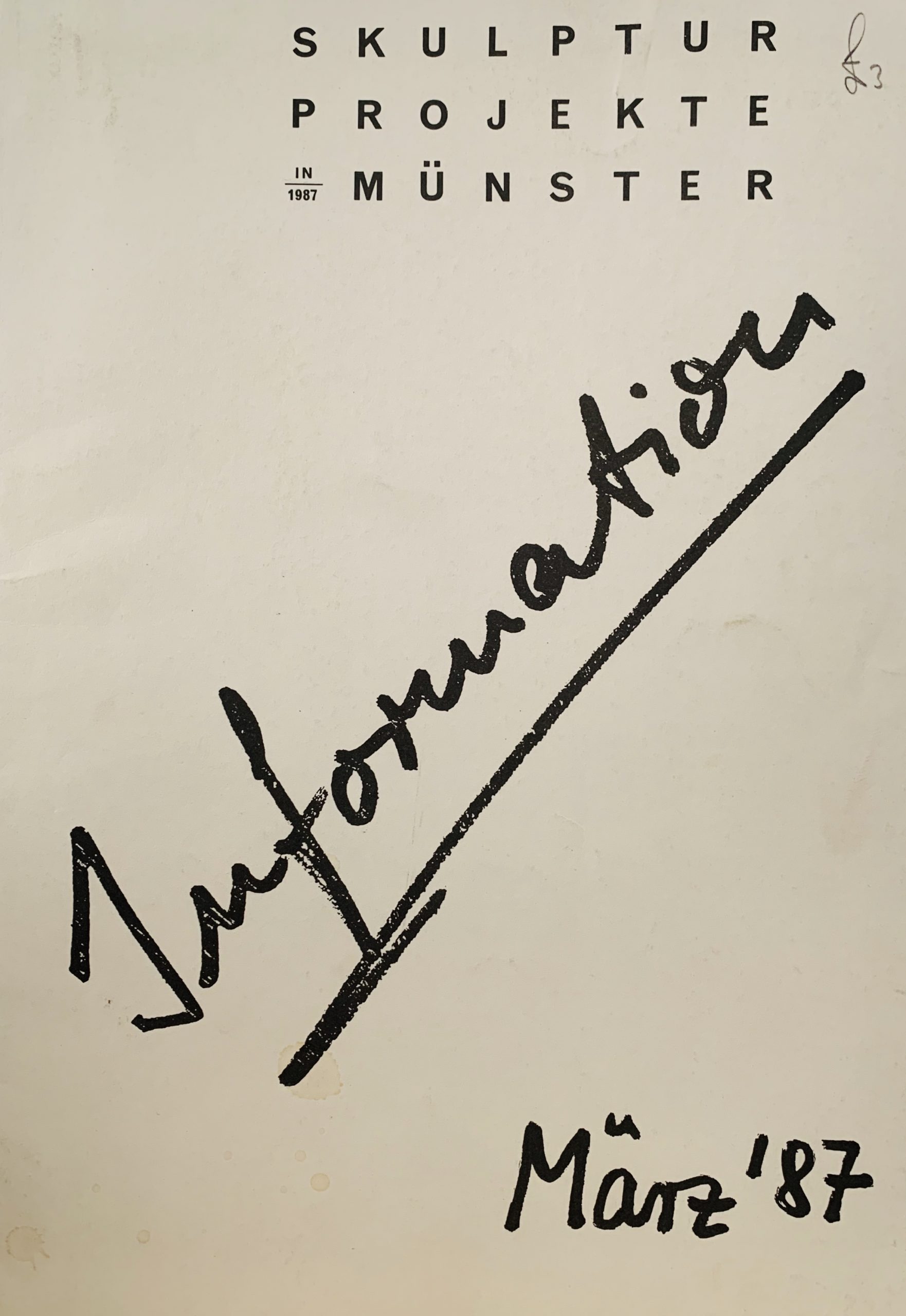 Posted at 15:04h in Exhibition Catalogues

munster: Munster Sculptur Projekte, 1987
30 x 21cm, 60pp (printed recto only). Press pack for the festival of Sculpture that only takes place in Munster every 10 years. Finlay is the only artist who had not submitted images of his work in advance and the text explains that the Project asked the poet to create a monument for the poetess Annette von Droste-Hulshoff. One green highlight to the page (added by Finlay) else VG+
JOINT:
Two typed notes from "rf" to "Clare" pointing out that the catalogue had been given to him by IGF and that she might find interesting. Both VG.