Little Sparta: Wild Hawthorn Press, 1987
41.5 x 20.8cm, green on white offset lithograph print with a text that descends vertically - "Tree leaved with mists". The tree here is a willow and FInlay is not only reflecting the way the leaves fall vertically from that tree but also the similarity of the diffuse leave shapes to mist. SLight former creases else VG. 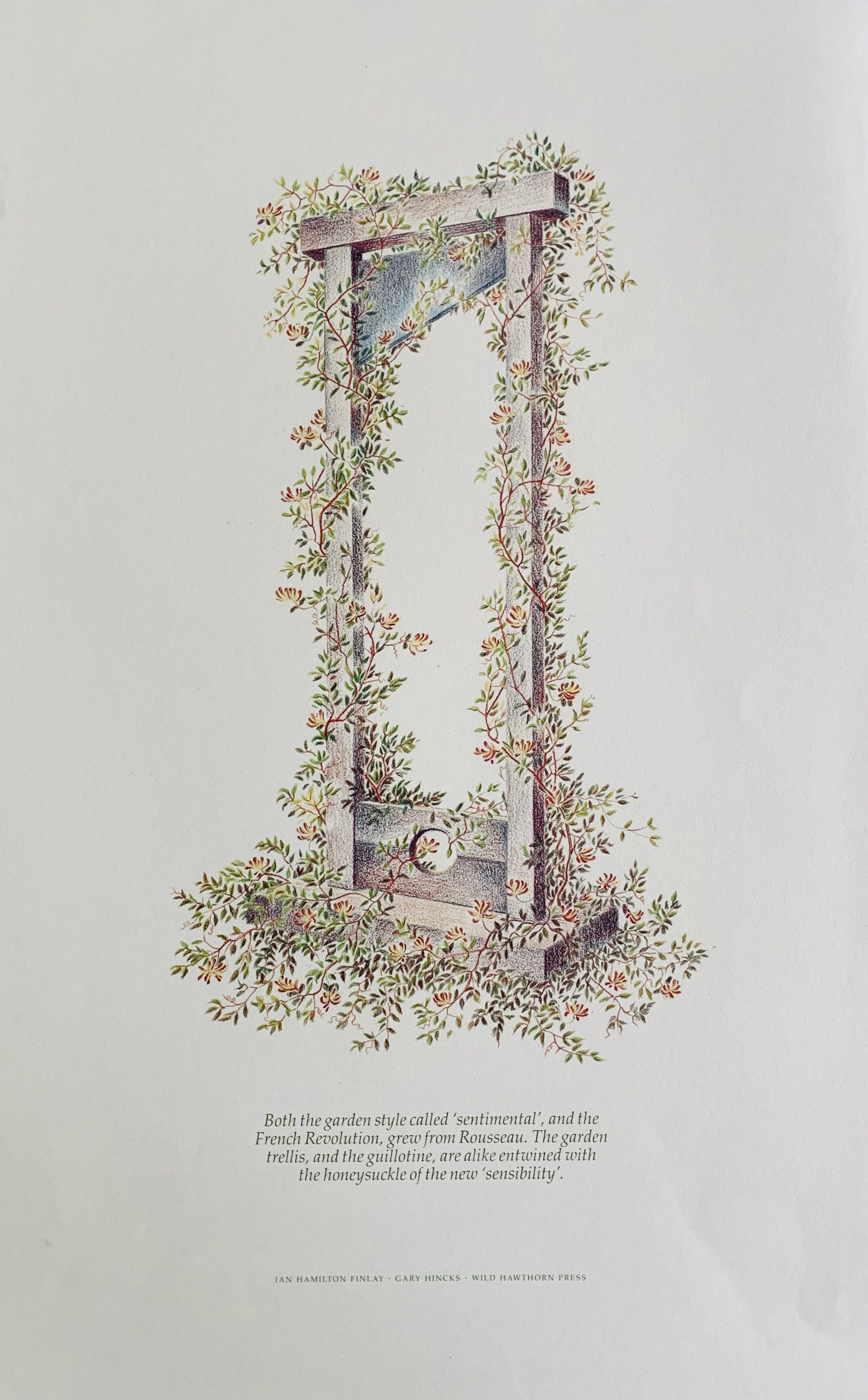 Little Sparta: Wild Hawthorn Press, 1987
47.5 x 30.5cm, full colour lithograph with a drawing by Gary Hincks of a guillotine with a flower growing all around it using it as a support. The text below by Finlay claims that both "the garden style called "sentimental", and the French Revolution, grew from Rousseau. The garden trellis, and the guillotine, are like entwined with the honeysuckle of the new "sensibility'." One of Finlay's most attractive works and self-explanatory from the text. 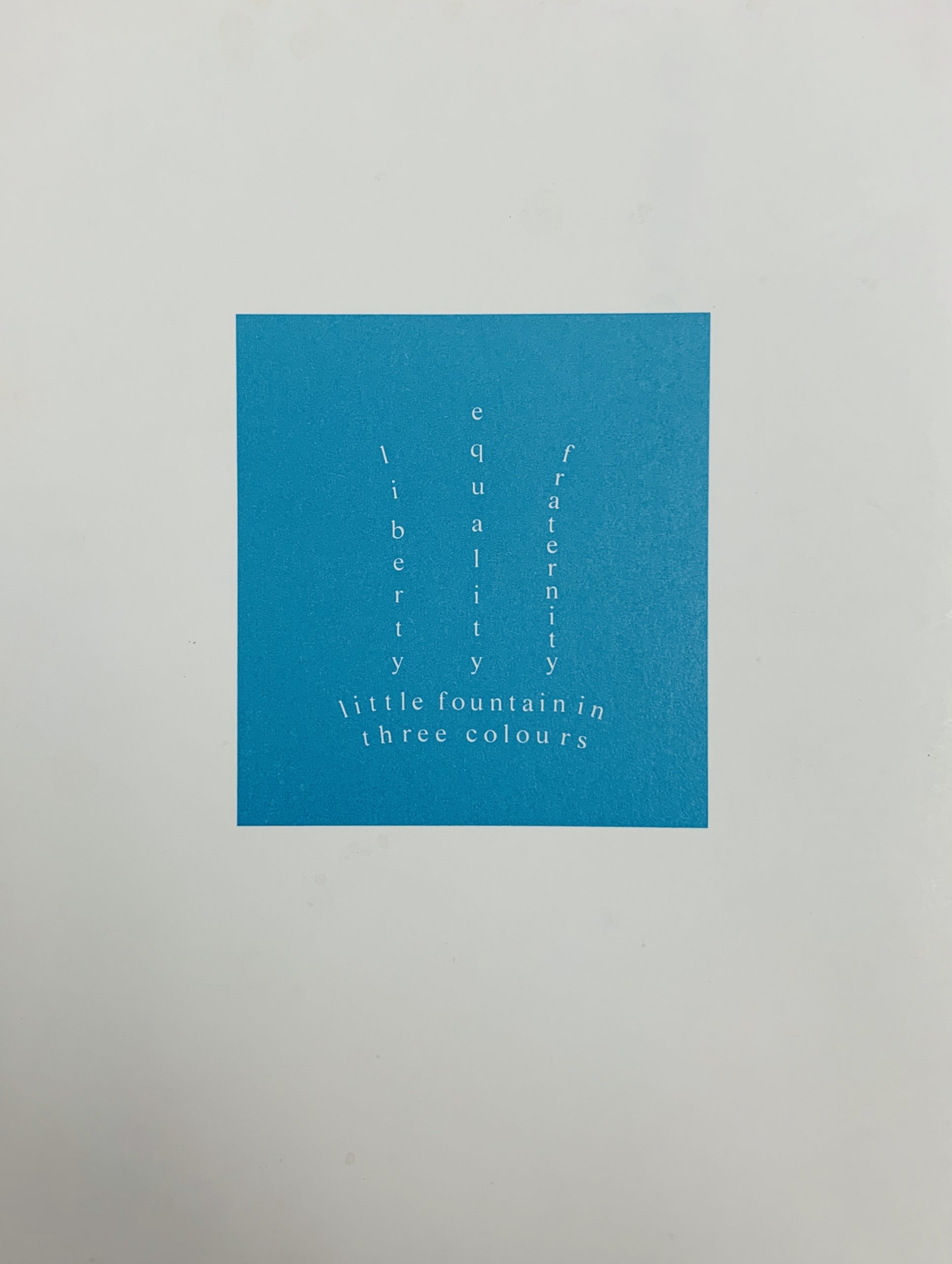 Little Sparta: Wild Hawthorn Press, 1987
22.4 x 17.1cm. light blue on white offset lithograph in folder. A concrete poem with the words 'Liberty Equality Fraternity / little fountain in three colours' in the shape of both a fountain and a crown. One of 300 printed. VG. ...

Posted at 15:47h in Artist's Postcards

Headley and Meulenkamp are being flayed alive -

Cape and The National Trust are growing ass-ears."

Finlay curses his enemies with imagery found in renaissance art and, in particular, the painting Apollo and Marsyas. VG+. 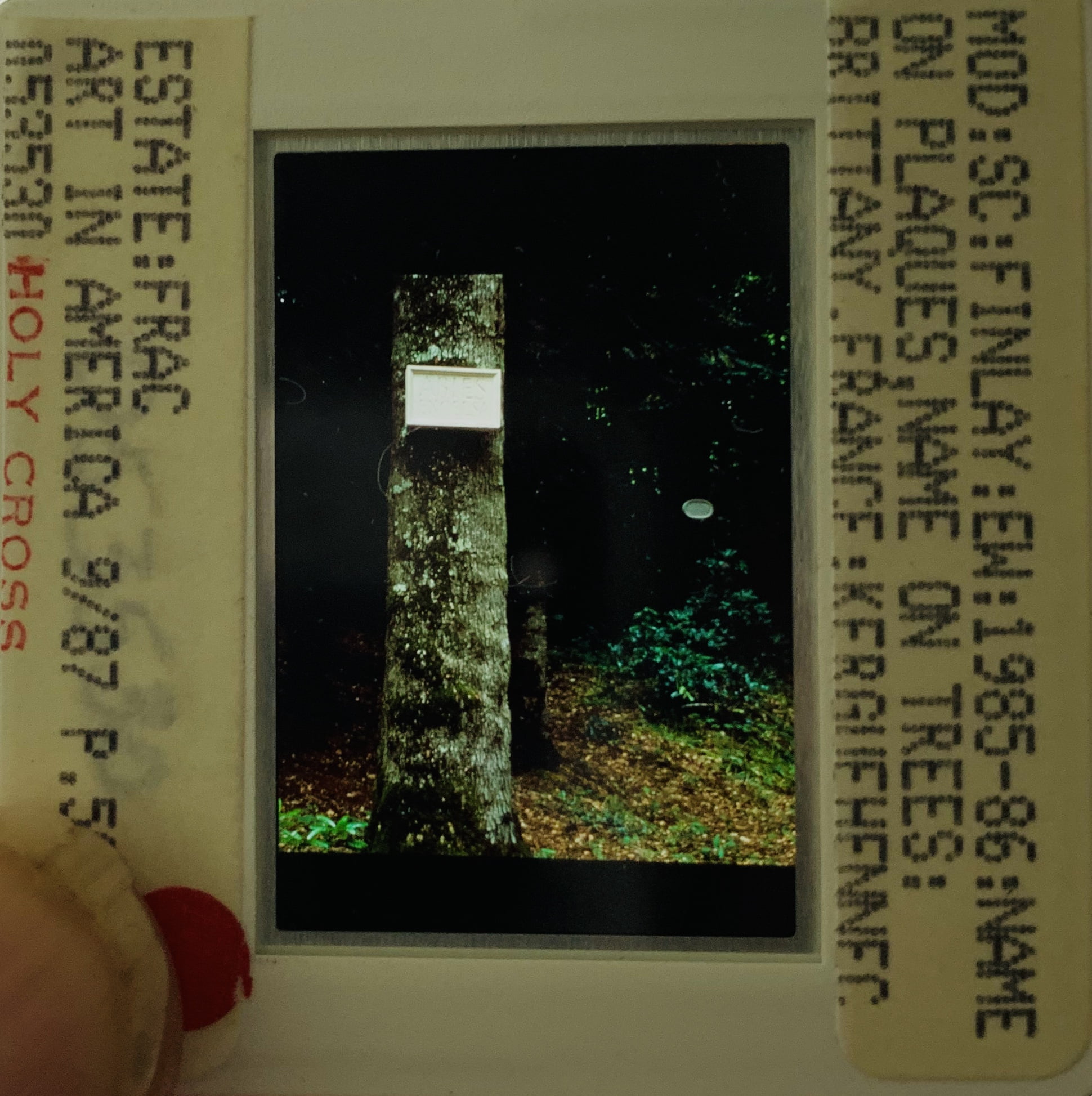 Posted at 15:56h in Photographs

N.p.: n.p., 1987
A standard full colour photographic 35mm slide with an image of a Finlay sculptural intervention in the landscape - here a tree plaque with a relevant name on it installed at the Château de Kerguéhennec. The work is called "Names of plaques, names of trees." The slide was prepared for a book "Art in America" (which is strange given the geographical location of the work pictured). VG+. 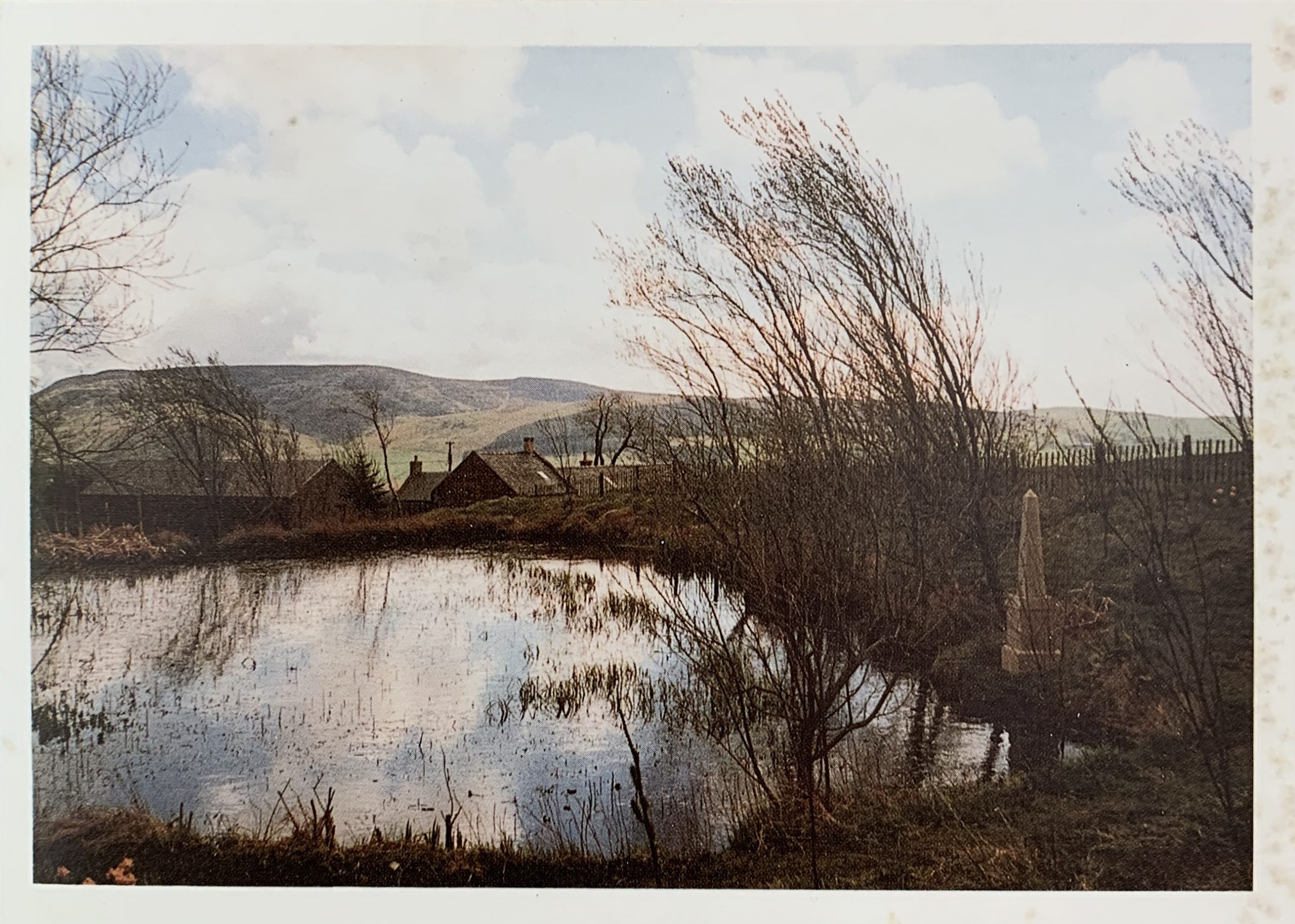 Posted at 15:45h in Invitation Cards

London: Victoria Miro Gallery, 1987
10.5 x 15cm, 8pp announcement card for a solo show of new and old work with a photograph of Little Sparta on the front of the card, internally gallery details. VG+. 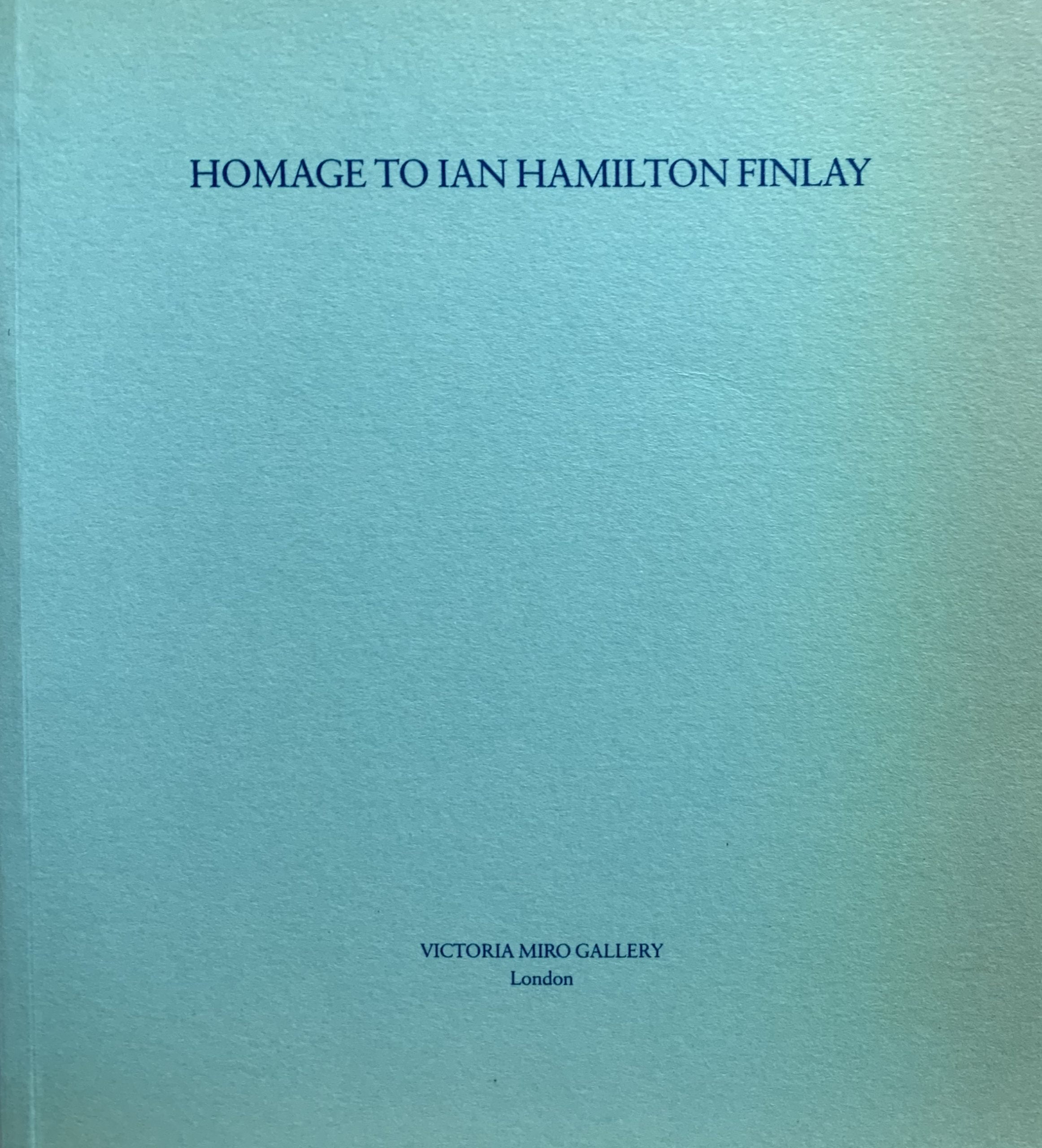 Posted at 11:47h in Exhibition Catalogues

Posted at 11:01h in Miscellany

London: s.p., n.d. (c. 1987)
15 x 10.5cm, 1pp. Eight different cheaply printed postcards attacking Finlay by the Guardian art critic who had fallen out with the poet.
The attempt at parodying Finlay in a format popularised by the artist is mostly awful. Possibly one card hits the mark but the appropriation of an image from Anselm Kiefer of the artist "heil hitler"-ing is shameful, and most are poor attempts at revenge - one might forgive the drawing of Little Sparta with enemies all around, but the attack on Finlay for not being Scots is simply stupid (Finlay's parents were of Scottish heritage and Januszczak's one possible place of moral high ground was for Finlay's ill advised call for his repatriation given he was British), the claim of hypocrisy over bursaries does not stand up (Finlay took nothing after the dispute with the Arts Council), and the aggressive quote from FInlay whilst slightly damaging is just an example of Finlay's polemic when angry. Angry letters are not meant to be poetry.
Here is a hard truth for Waldemar Januszczak, when he has gone and his columns in a newspaper long forgotten (most newspaper articles are forgotten in a week after all) Finlay will still be celebrated for his artistic achievements. That must hurt. All VG+. Very scarce. 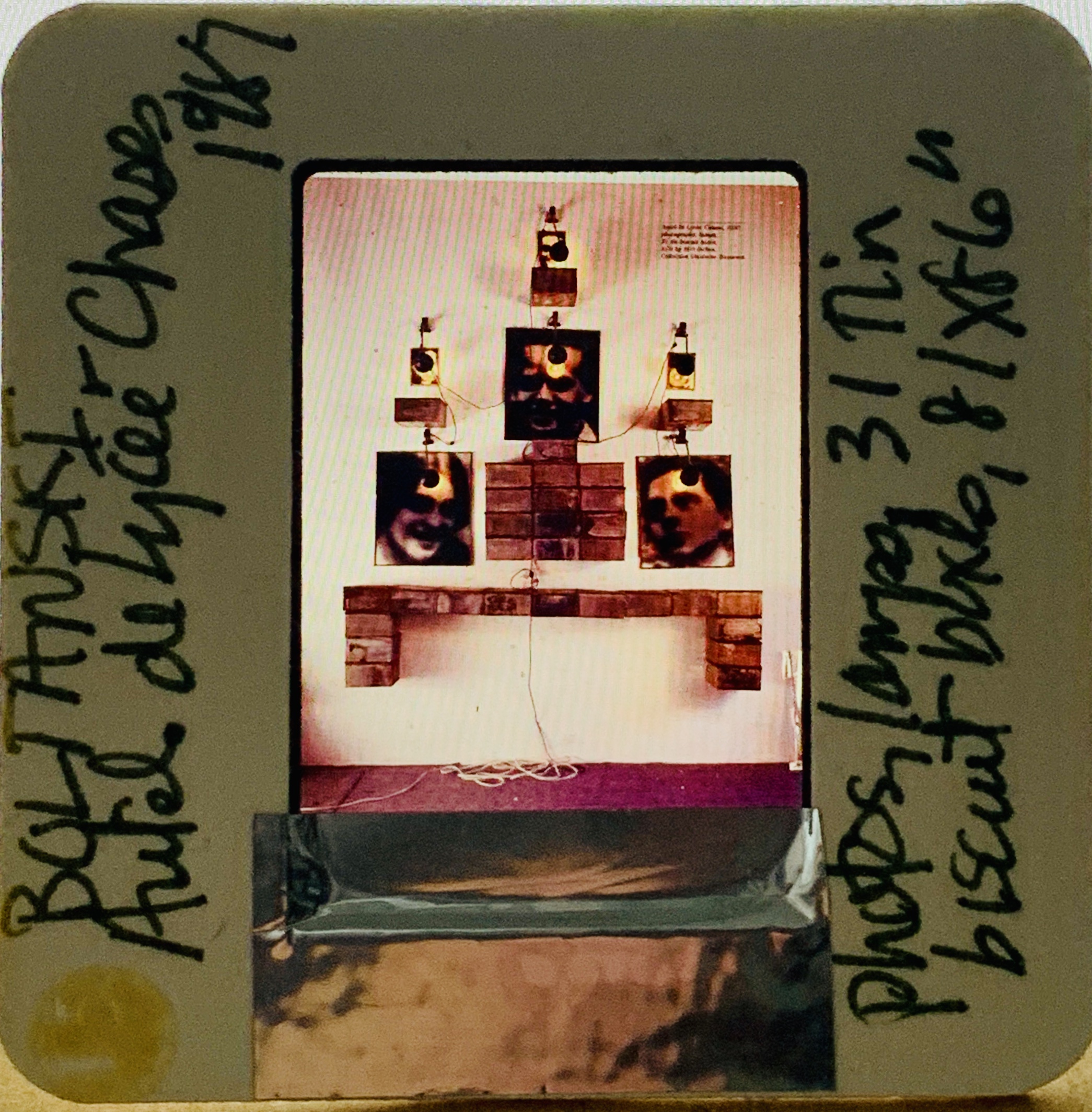 Posted at 18:41h in PHOTOGRAPHS

NYC: n.p., 1987
5 x 5cm, b/w transparency with a detail of the Boltanski installation "Alter to the Chases Highschool" from 1988. Handwritten legend on the plastic - a slide provided by a gallery to press or clients. VG+. 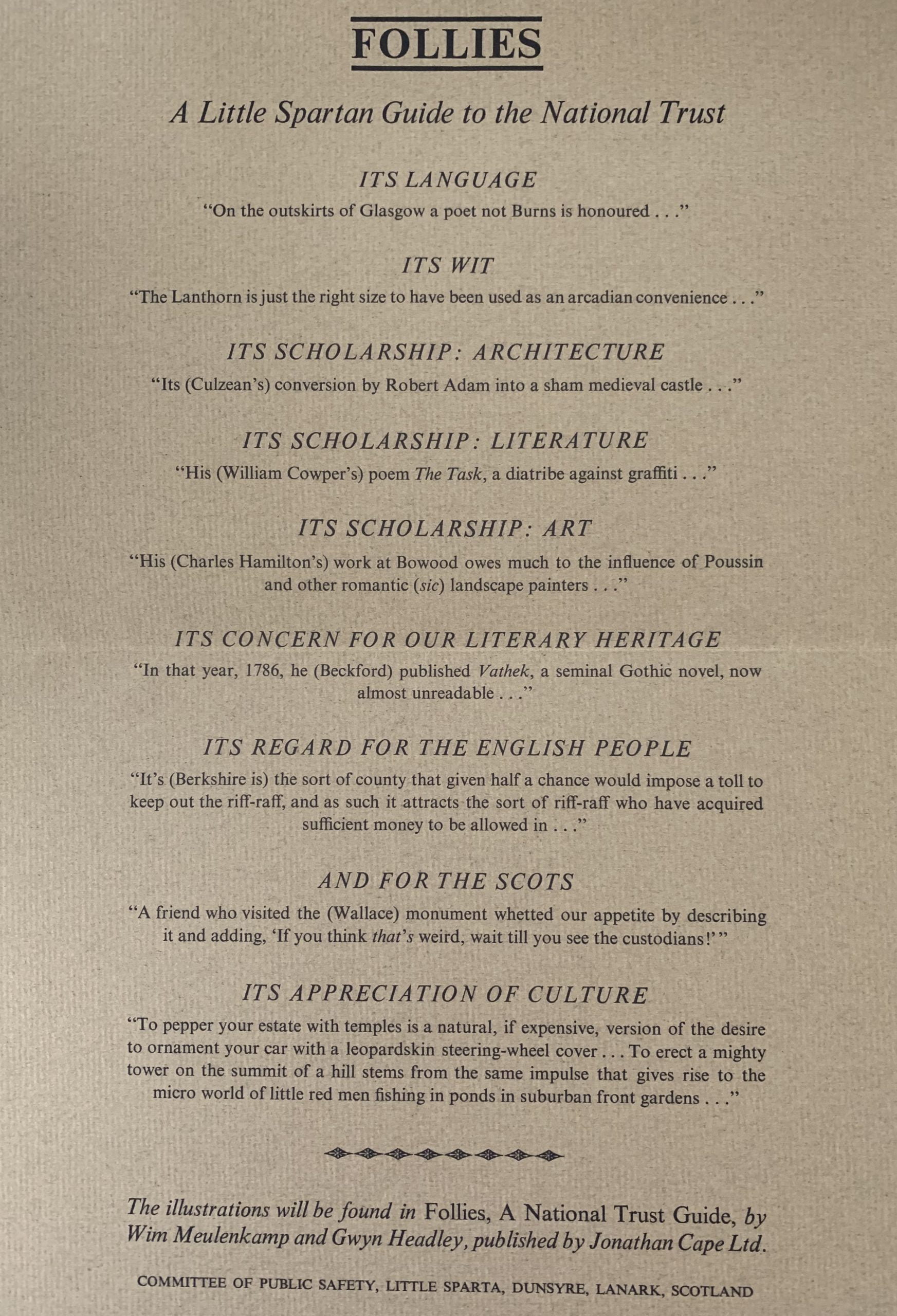 Little Sparta: Wild Hawthorn Press, 1987
29.6 x 21cm, BLACK on light brown offset lithograph with a series of small digs at the National Trust by quoting the most absurd parts of the "Follies, A National Trust Guide" that had so offended the poet - such as:

ITS REGARD FOR THE ENGLISH PEOPLE
"It's (Berkshire is) the sort of county that given half a chance would impose a toll to keep out the riff-raff, and as such it attracts the sort of riff-raff who have acquired sufficient money to be allowed in...