Little Sparta: Finlay, 23 February 1988
Standard hand addressed DL manilla postal envelope to Inez Horst-Aletrino. Notable for the black rubber stamp impression added by Finlay to the front: "WHAT IS NOT RESOLVED IN LANGUAGE IS RESOLVED IN BLOOD" . Return address stamping on back. Slightly roughly opened. 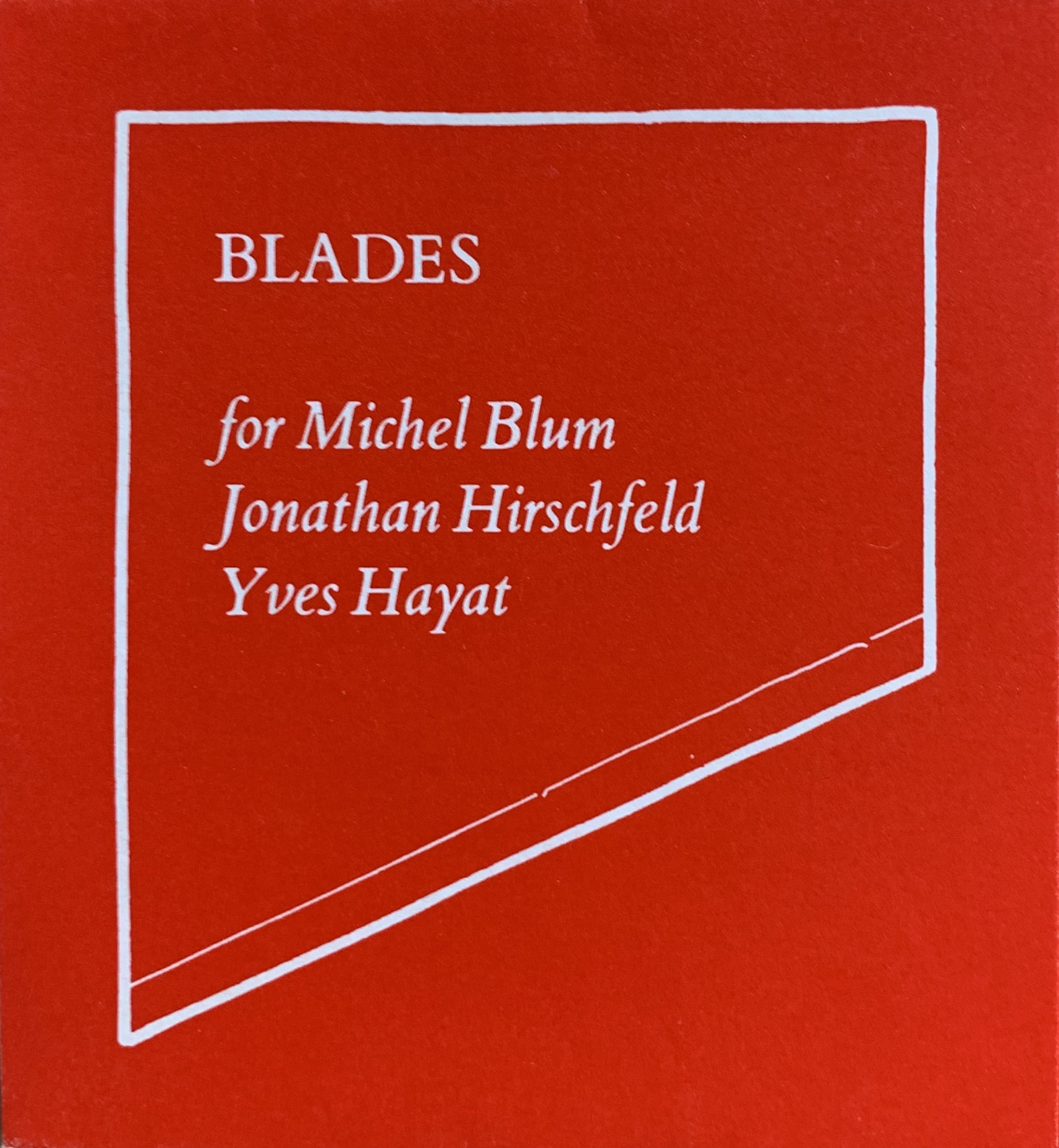 Posted at 19:39h in Artist's Postcards

Little Sparta: Wild Hawthorn Press, 1988
8.8 x 8cm, 12pp (accordion fold printed on one side only). Folding artist's card with images of a guillotine blade with four one line poems such as "Hard-edged abstraction" over printed on the image.
The publication is an attack on Michel Blum, Jonathan Hirschfeld and Yves Hayat all of whom had recently accused Finlay of anti-semitism (and had turned on Finlay despite the poet at one point helping him in his personal life). VG+

Darmstadt: Hessischen Landesmuseum, 1988
21 x 10cm, 6pp announcement card for a show of works by the two colossuses of the, then, contemporary art world in the year after Warhol's death and two years after Beuys' heart attack that took his life. Two b/w images of the artists internally. VG+. 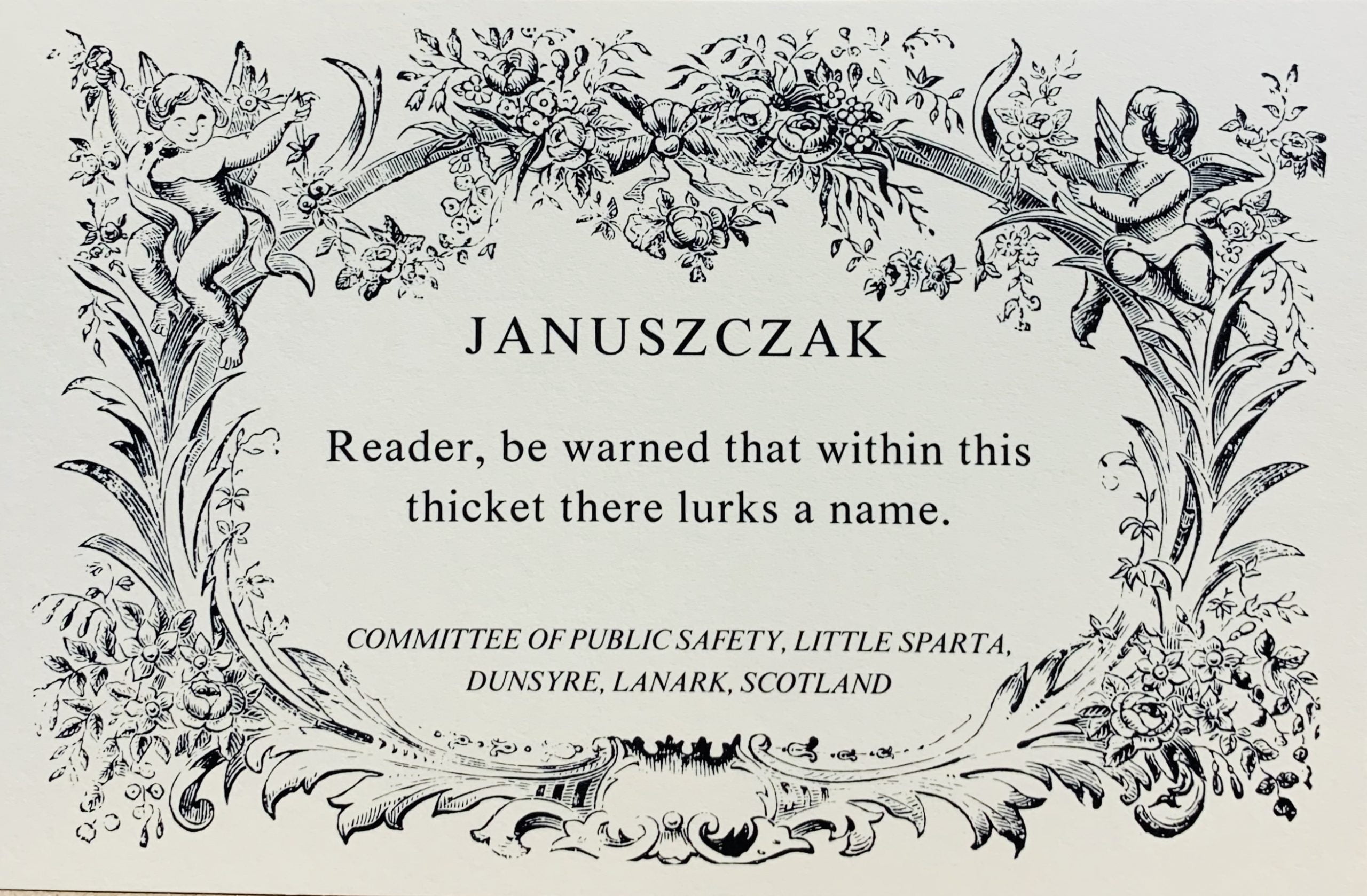 Posted at 20:21h in Artist's Postcards

Little Sparta: Wild Hawthorn Press, 1988
8.4 x 13cm, 1pp. Artist's card attacking the Guardian art critic Januszczak. The text "Reader, be warned that within this thicket there lurks a name" is a jibe at the Polish name and a slight hint that Finlay regards Januszczak as a thicko. As with some of Finlay's attacks, this might well have been better not published as it hints at a xenophobia (which may have seemed less in 1988) although knowing Finlay he probably saw the profuse use of consonants in the name and thought of nothing else but that is being generous.
Finlay's ire was not to be fired up and a majority of the cards he published in the late 80s were attacks on his enemies. While sometimes amusing, and sometimes well aimed at people who had criticised him mostly unfairly, many are little more than slight barbs and this period of artist card production was not that artistically valid. VG+ 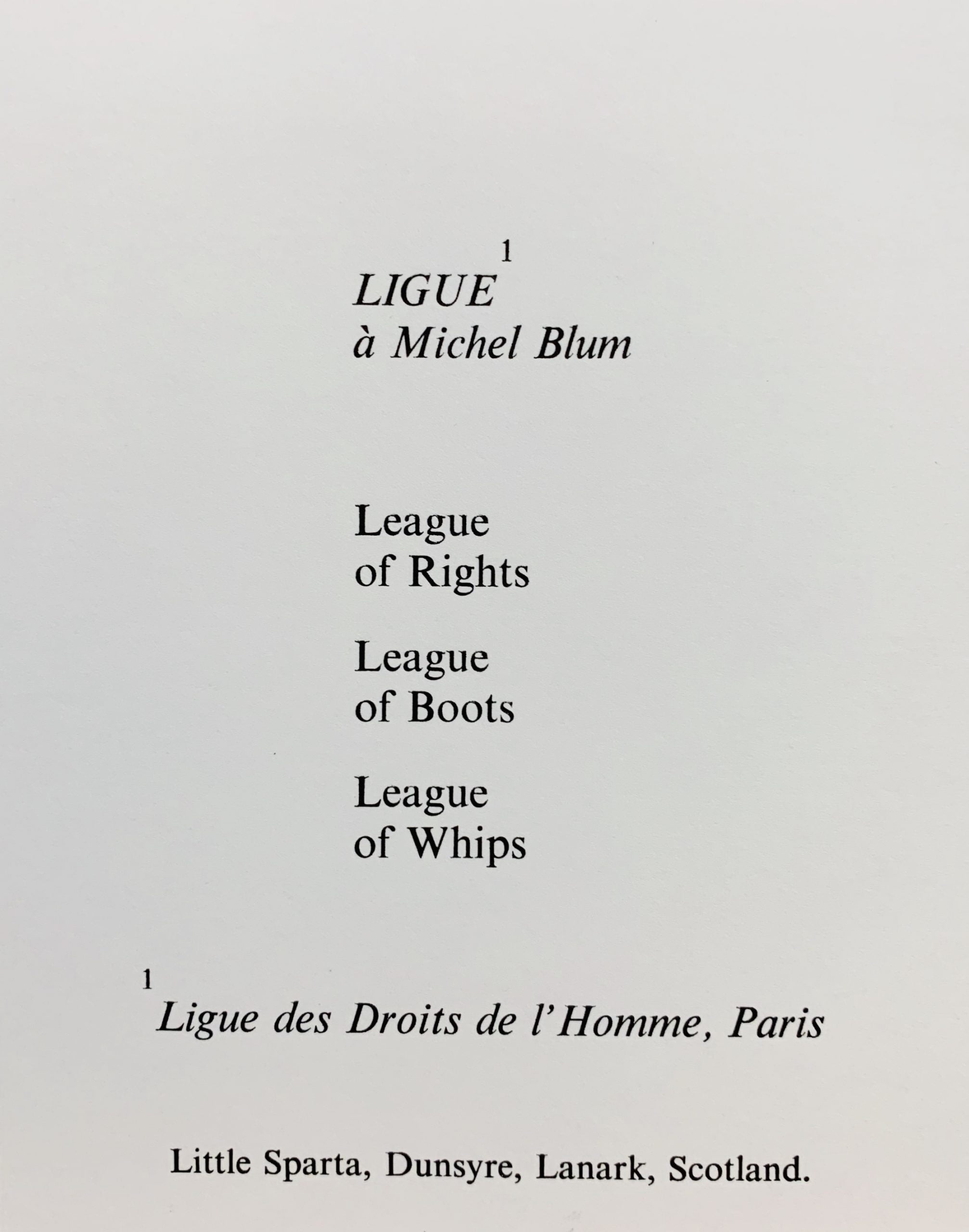 Posted at 20:29h in Artist's Postcards

Dijon: Association pour la diffusion de l'art Contemporain, 1988
21 x 14cm, 24pp plus card covers and printed grey dustjacket. First edition of this artist's book which claims to reproduce nine sepia-toned portraits of Harly "found in a cigar box by the artist". Geo Harly was a pre-war entertainer it seems and a man who loved his mother. One of 300 numbered copies. VG+. 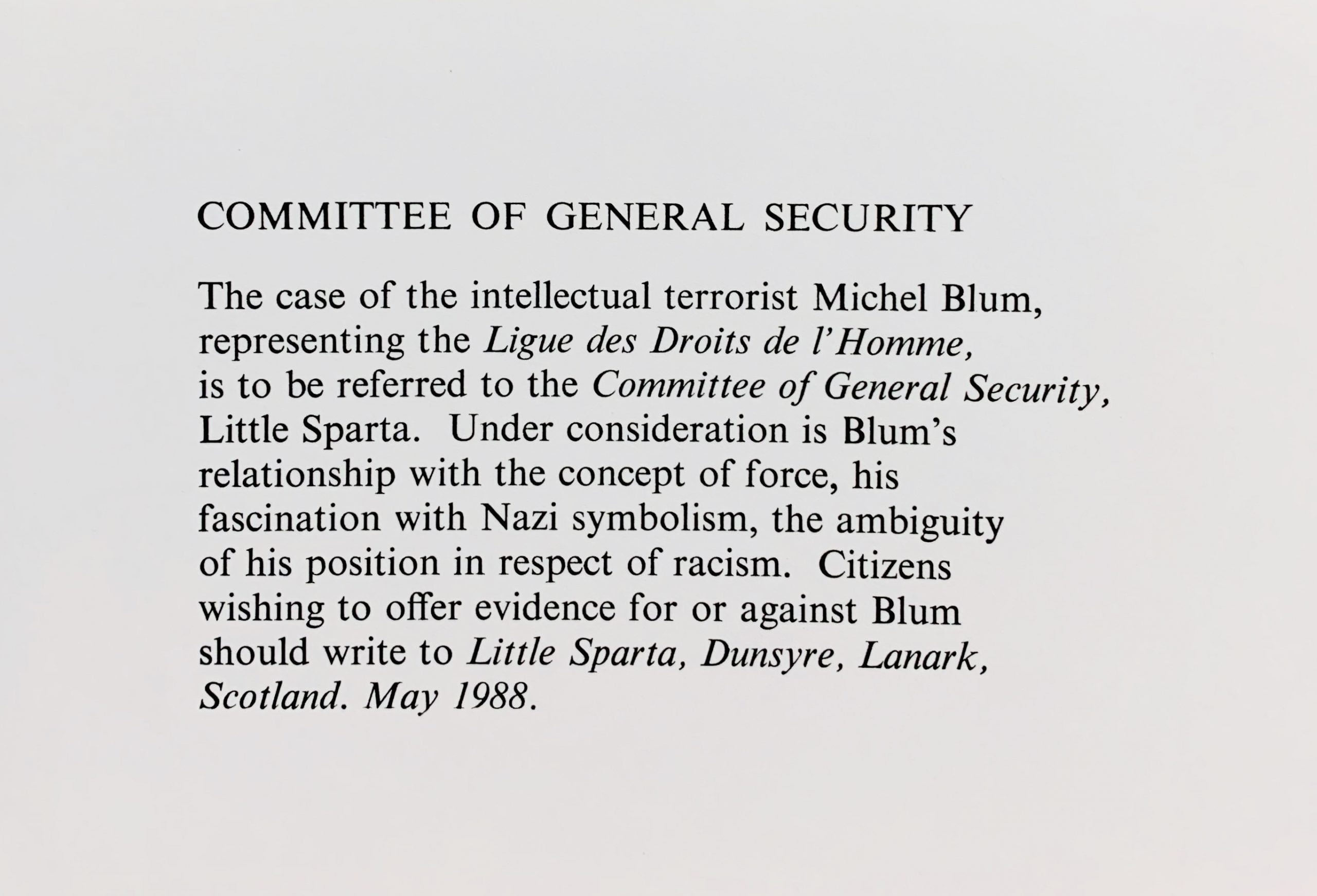 Posted at 20:38h in Artist's Postcards

Little Sparta: Wild Hawthorn Press, 1988
10.1 x 14.8cm, 1pp. Artist's card with a declaration that mirrors those of the Committee of Public Safety during the French Revolution where (here) Michel Blum) is referred to the Committee of General Security, for his various crimes and asking anyone wishing to offer evidence for or against Blum to write to Finlay. Dull and probably produced in the hope that some dirt on Blum might actually arise from someone reading the card.VG+. 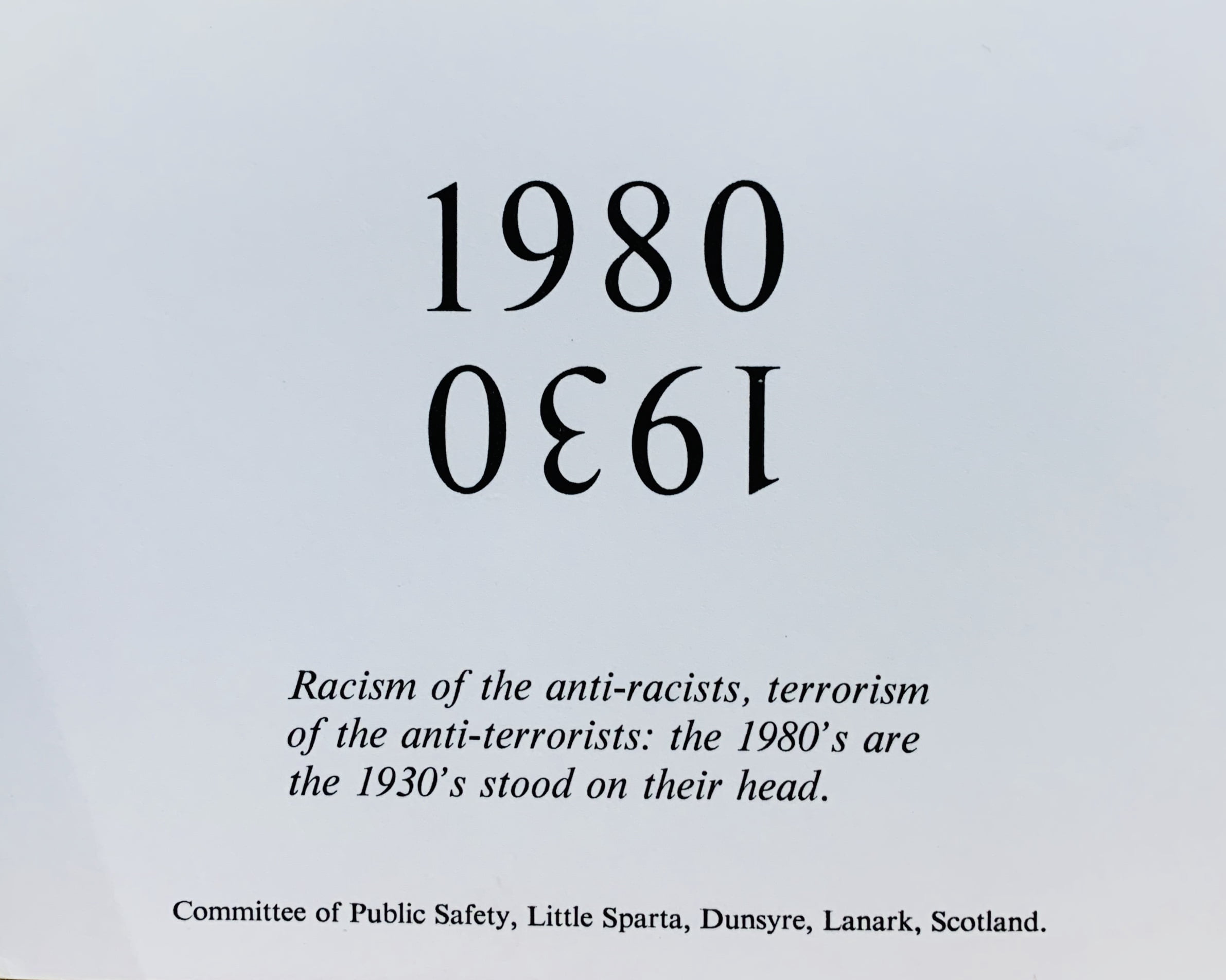 Posted at 20:33h in Artist's Postcards

Little Sparta: Wild Hawthorn Press, 1988
10.1 x 12.7cm, 1pp. Artist's card with a quotation - "Racism of the anti-racists, terrorism of the anti-terrorists: the 1980's are the 1930's stood on their head." (sic) Typographically the two dates are set above in large font size with the 1930 upside down to make a visual correspondence to the each other and the text. Another attack card here without naming criticising Millet and her cohorts. Interestingly Finlay makes one of his rare mistakes in the text and incorrectly adds a " to the years. VG+.