31 Dec CICATRICES. 1990. ONE OF 37 DELUXE COPIES WITH “CINQ PHOTOGRAPHIES DE L’ALBUM DE LA FAMILLE D.”, AN ORIGINAL SIGNED & NUMBERED PHOTOGRAPH BY BOLTANSKI & AN ORIGINAL HANDWRITTEN DOCUMENT BY CLUZEL. ONE OF ONLY 37 SUCH COPIES.

Paris: Librairie Seguier, 1990
32 x 26cm, two part blue card box with handwritten title label content of a 30 x 21.5cm, 104pp plus blue card boards book with, again, an handwritten label. The book has been described as poetry in some online descriptions (presumably because of the poet's earlier works) but it is really a work in prose of reminiscences from the author's childhood - a subject matter which reflects much of Boltanski's interests in recovered memory.
This being the deluxe edition there is a further artist's book "Cinq Photographies de l'album de la famille D. " which is 8 x 11.5cm, and contains 6 appropriated photographs (taken from originals) mounted as if in a small photo-album. This book was only available in these deluxe copies making it one of the rarest of Boltanski productions.
There is also an untitled 24 x 18cm, b/w photograph of a young boy with his toy wooden horse standing outside of a house. The photograph is also mounted in a folder with tissue guard.
Finally there are four hand-written original manuscripts of texts from the book by Cluzel, and a colophon sheet which is also hand annotated by the poet and numbered from the edition of only 37 (this example is number 23). These pages are in a plastic transparent folder
Rare and important not least because of the inclusion of the small artist's book, this example is in VG++ condition although the front cover label has lost some of the ink from the title and Cluzel's signature - however, Boltanski's signature on the label is still very clear and dark.

Little Sparta: Wild Hawthorn Press, 1990
7.5 x 7.5cm, 32pp and card covers and printed dust jacket. Artist's book with 9 illustrations by Gary Hincks and three line poems by Finlay.
The texts all relate to winter in the countryside and could be read as a single work but really each stands alone.

is shown next to a painting of footprints in the snow.
the staples are rusty but this is a scarce item - only 250 copies were printed as Christmas gifts, else VG+. This example is signed by Finlay on the first blank paper in ink. 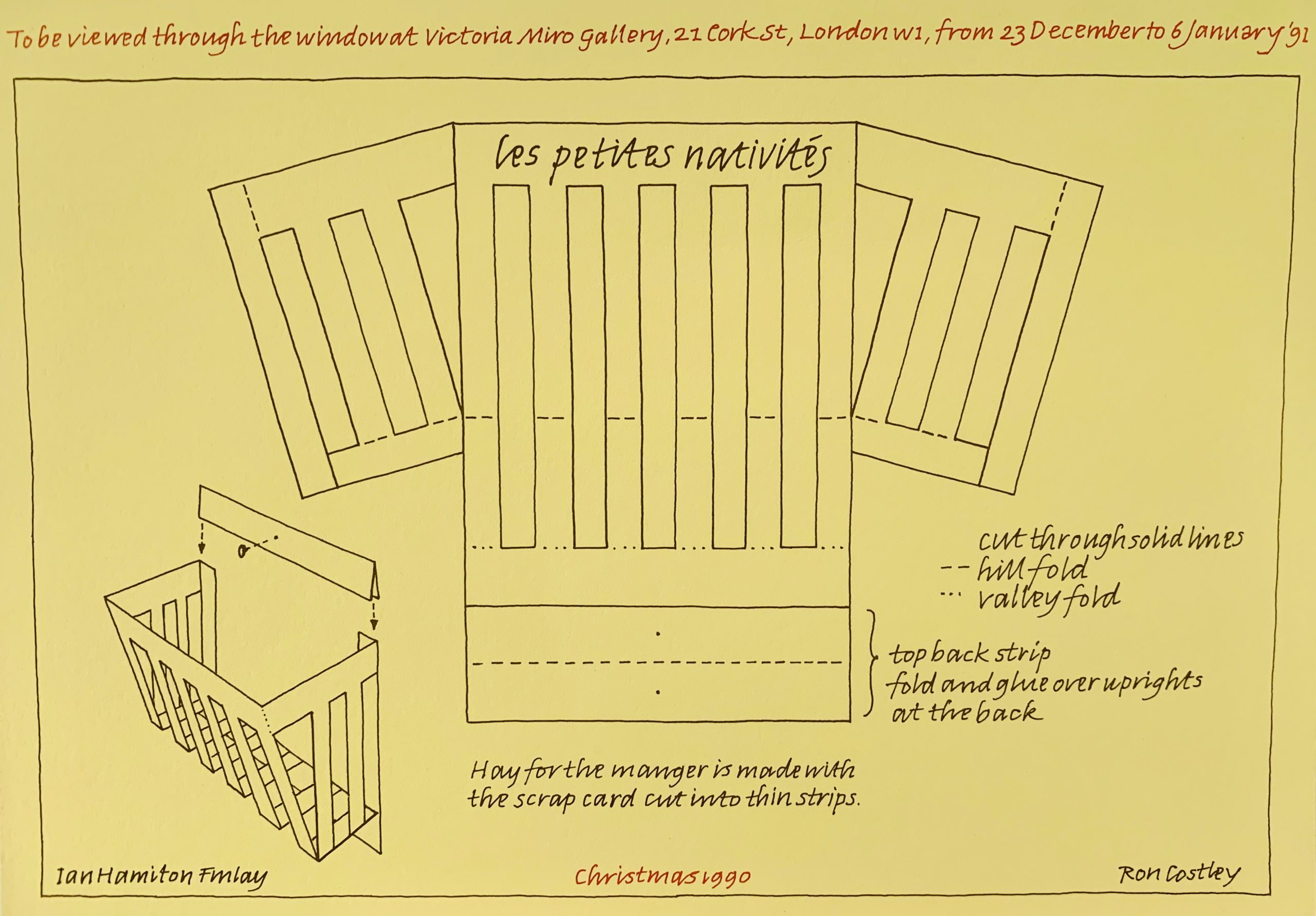 London: Victoria Miro, 1990
21 x 20cm, 1pp black and red on cream card. A "cut-out' which would allow the owner to make a small cardboard manger (with the cut away pieces of card used to create "hay" by shredding. The instruction is "to be viewed through the window at Victoria Miro Gallery, 21 Cork Street, London W1, from 23 December to 6 January, '91". A Christmas card of sorts. With original crepe paper "wrap around". VG+.