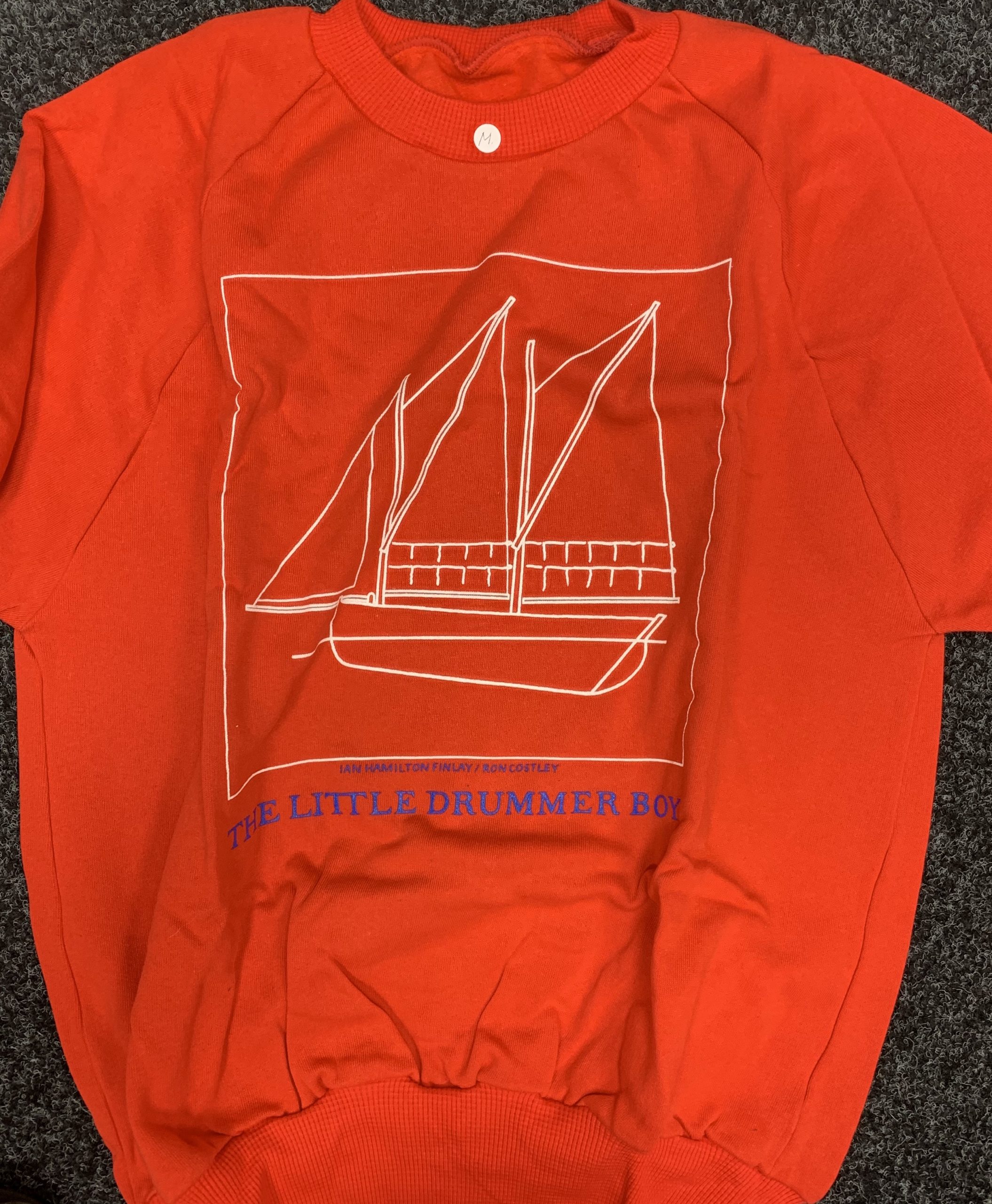 Edinburgh: Graeme Murray Gallery, 1991
Red 100% cotton sweatshirt with an image of a boat called "Little Little Drummer Boy". Finlay was interested in this image from the 1970s because the reef knots on the sails reminded him of the pattern on the outside of the drums used by the French revolutionary army within which Bara the "little drummer boy" was martyred. XL. There were blue, grey and black variants of this clothing multiple. VG+

The re-printings make sense as part of Boltanski's reconstitution of his past - there is no reason why he should not make the rare books easier to find given the rarity of some of them (and the high prices) but book dealers curse this publication as sometimes these reprints are offered as first editions and it is hard to tell the difference.
This is one of 50 signed and numbered deluxe copies (on the front label) which has additional to all of the above an original photograph of Boltanski as a comic from the Saynetes Comiques series which is signed and numbered in white on the front and is presented in a card folder with tissue guard. These deluxe copies are very hard to find. 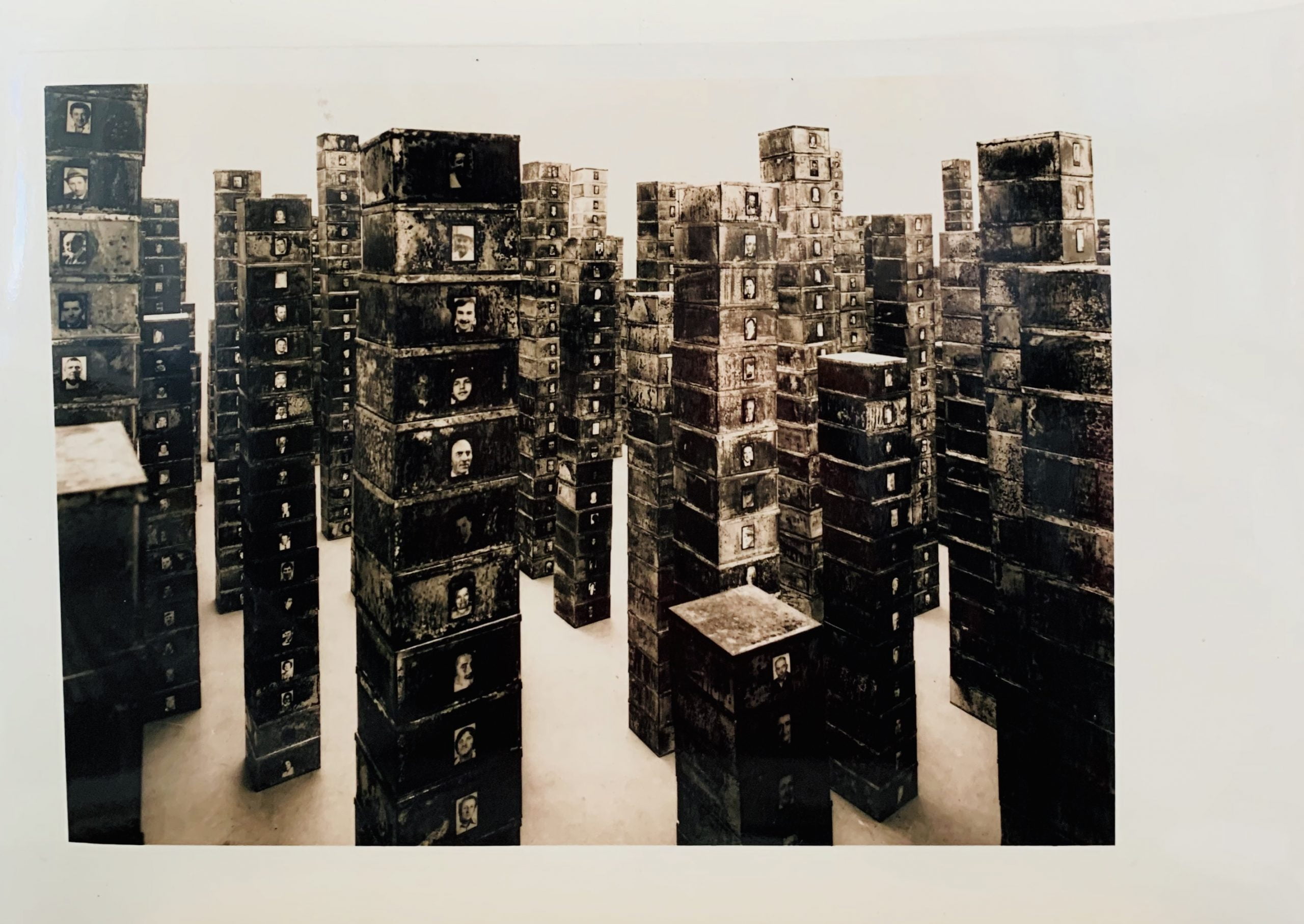 Posted at 10:13h in PHOTOGRAPHS

20.5 x 25.5cm, duotone (brown and black) original photograph of a Boltanski installation of tin boxes with unknown photographs on each. The installation is probably "The Reserve of Dead Swiss" from 1991 which has been shown in different configurations of the various boxes in different exhibitions but we cannot be certain.
BR>... 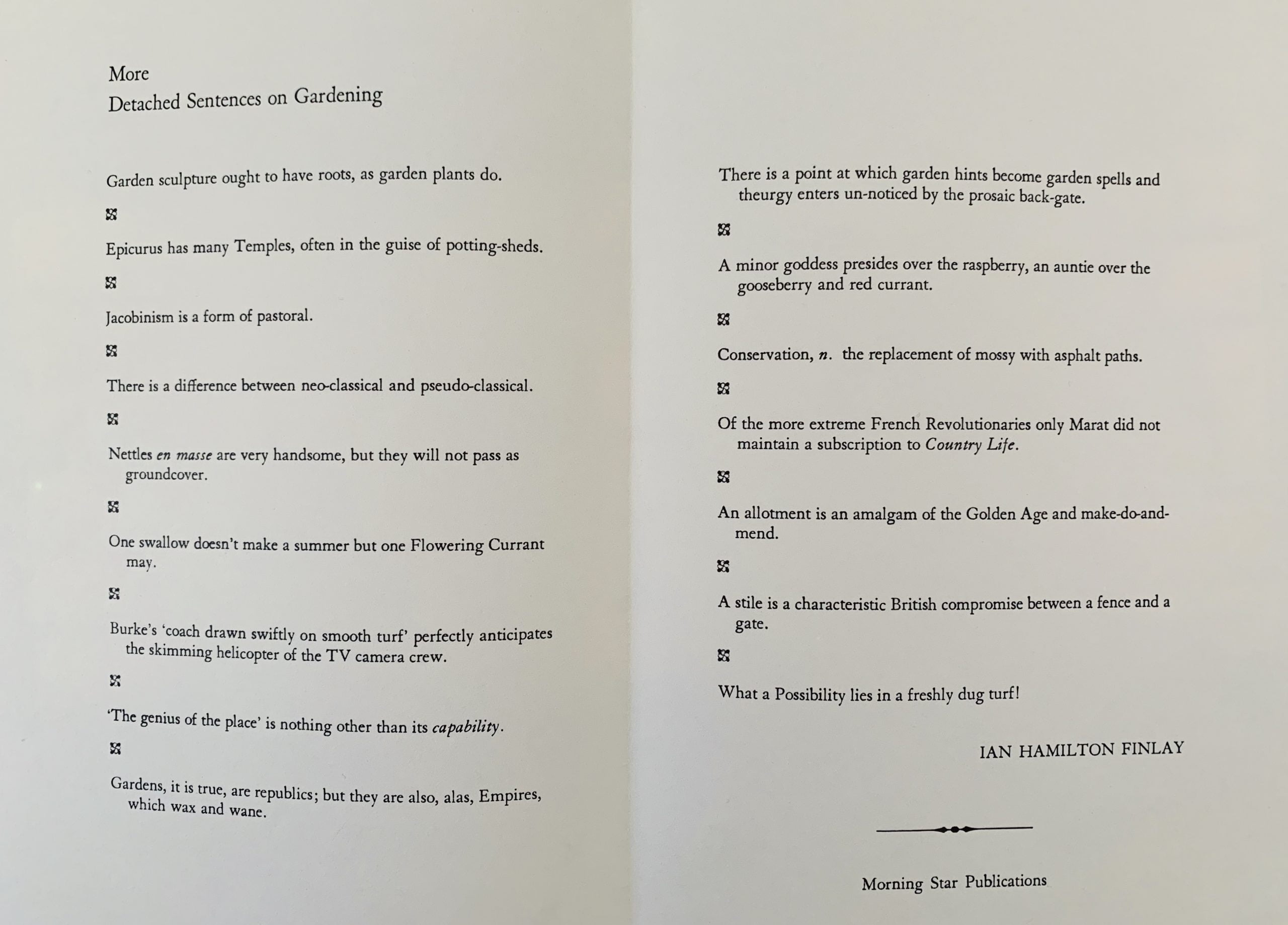 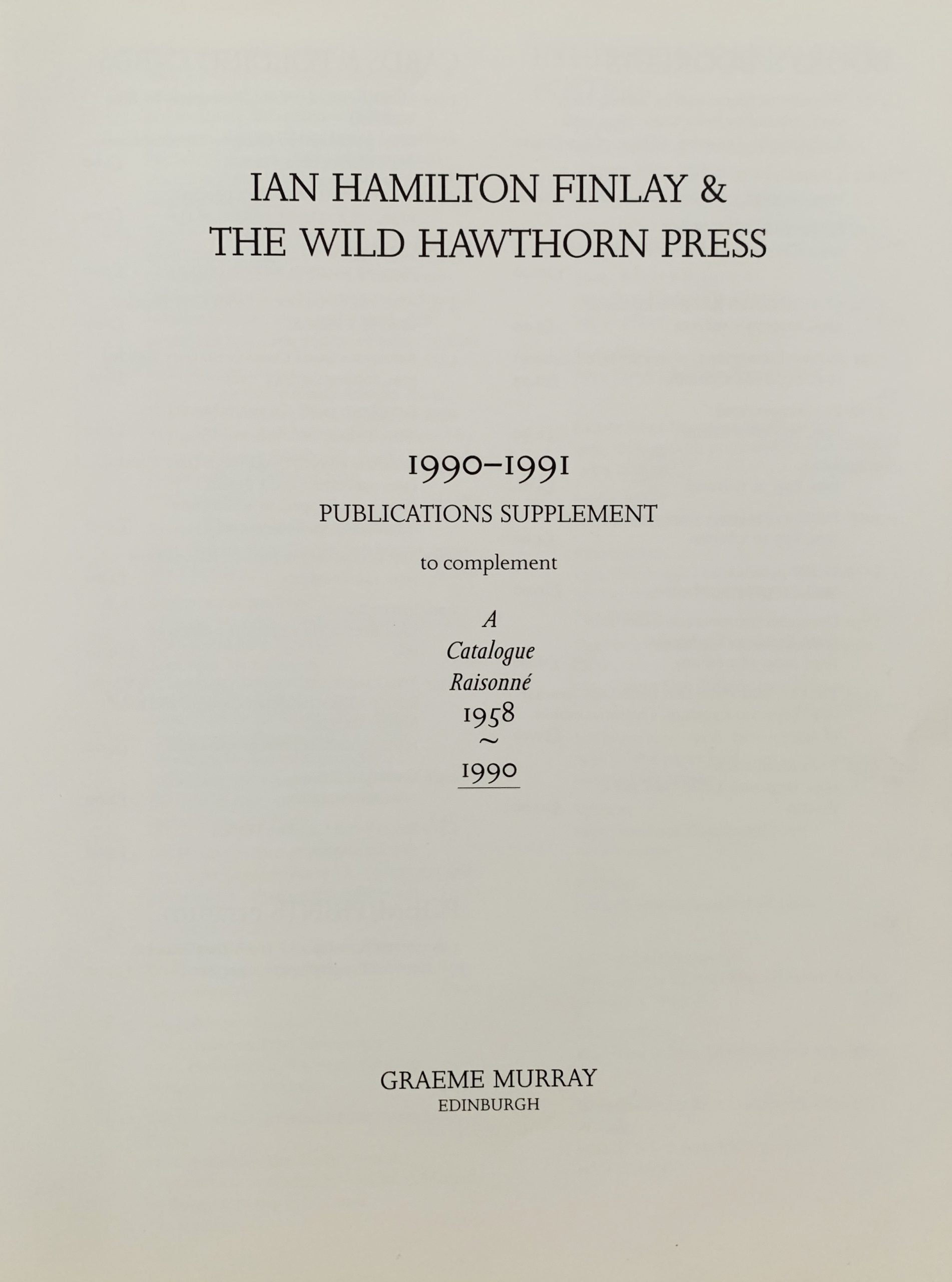 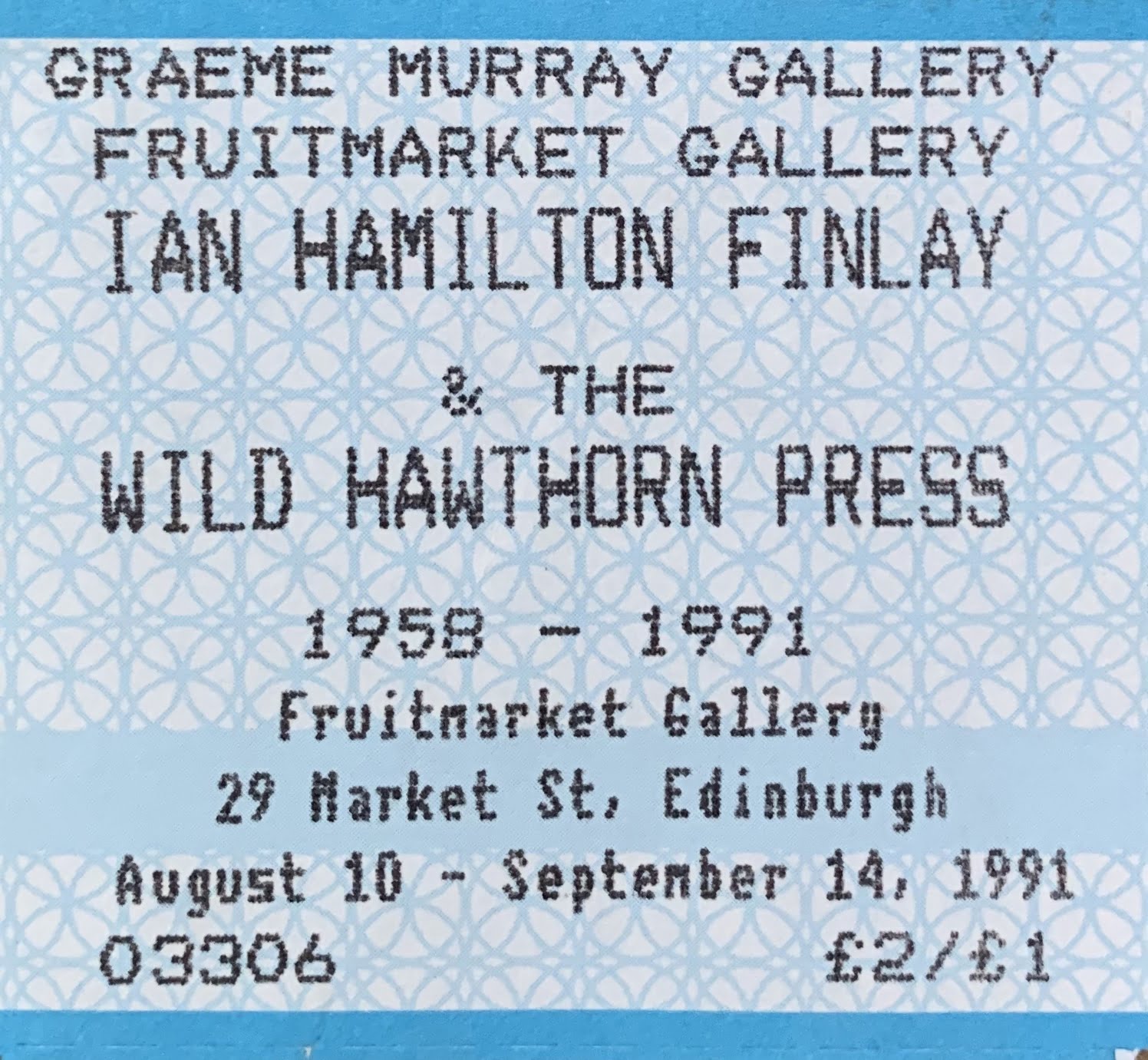 Posted at 22:41h in Miscellany

Posted at 17:59h in Invitation Cards

Edinburgh: Fruitmarket Gallery, 1991
21 x 7.8cm, 2pp announcement card with a reproduction of Finlay's Evening Will Come They Will Sew The Blue Sail on the front in blue on white and verso gallery details. VG+.

02 Aug SANS-SOUCI. 1991. ONE OF 30 DELUXE SIGNED & NUMBERED COPIES WITH LAID IN ORIGINAL PHOTOGRAPH.

Frankfurt am Main/Koln: Portikus/Walther König, Köln, 1991. 22 x 29cm, 16pp, plus printed typographic boards. Artist's book with 56 b/w illustrations of German family life just before or at the beginning of the second world war with many of the subjects in military uniform. Each page has a tissue guard which has a patter of a cobweb on it. The book looks like a family album and the subjects are happy in their life - one cannot tell anything about their personal guilt or actions or morality during the war from the photographs.
This is one of only 30 copies that has an additional original 18.7 x 22.4cm, b/w photograph on the first sheet in photo-corners of a wedding with two men in uniform with the bridge and her friend. The extra page is signed and numbed by Boltanski on the inside cover of the book. VG+. Very scarce.

Posted at 09:57h in Exhibition Catalogues