Posted at 21:32h in OBJECT MULTIPLES

London: Serpentine Gallery, 1992 Three different artist's postcards (10.5 x 15cm, 2pp) each with a pair of images that Boltanski found in copies of the Nazi SIGNAL magazine. He pairs up images of cultural life (a ballet dancer, a model) and nature (a bee) alongside images of soldiers and weapons. This relates to other work where images of victims and murderers are mixed together where no-one can tell which is which. The normalcy of daily life could be found in Nazi Germany as much as less guilty societies (and one should remember Boltanski's jewish heritage).
Take Me (I'm Yours) was the first of a number of such exhibitions which Boltanski had a hand in initiating alongside Hans Ulrich Obrist. Members of the public could take the artworks away. However these cards were only found in the deluxe catalogue for the show.
Each of these cards are signed in pencil by Boltanski on the back.

THE HAPPY CATASTROPHE
Be

and the explanation on the left "The happy catastrophe" - Friedrich Schlegel's characterisation of the French Revolution.
The word befalls is split as if part has dropped off or down but also is a physical reminder of a head falling from a body or the guillotine blade dropping down from above.
Slight former diagonal crease on cover but else VG. 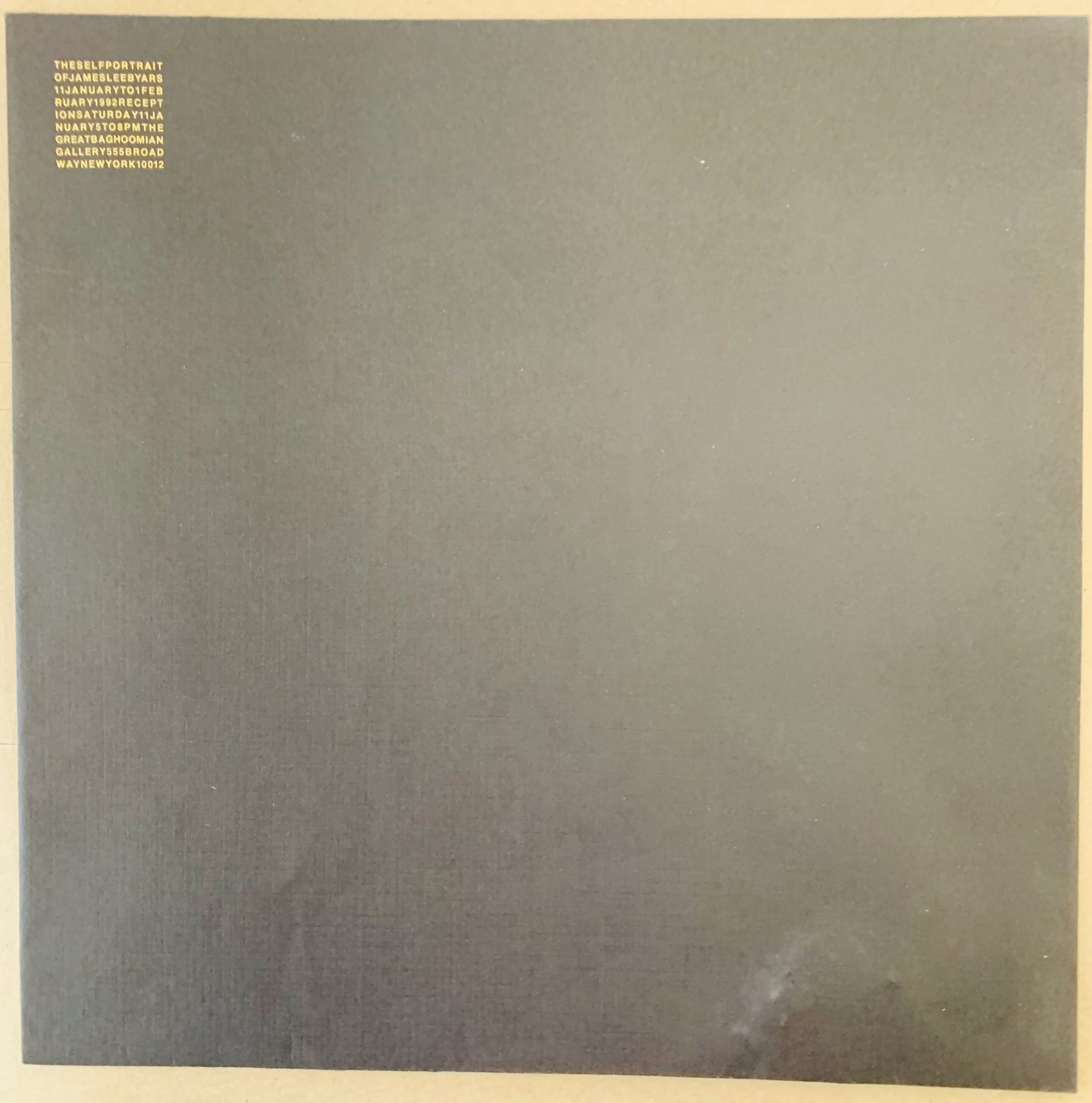 NYC: Baghoomian Gallery, 1992 21.5 x 21.5cm back sealed envelope content of a small plastic ball that can move around inside the paper. Gold printing on top left. Object multiple in the form of an announcement mailing. Fine. ... 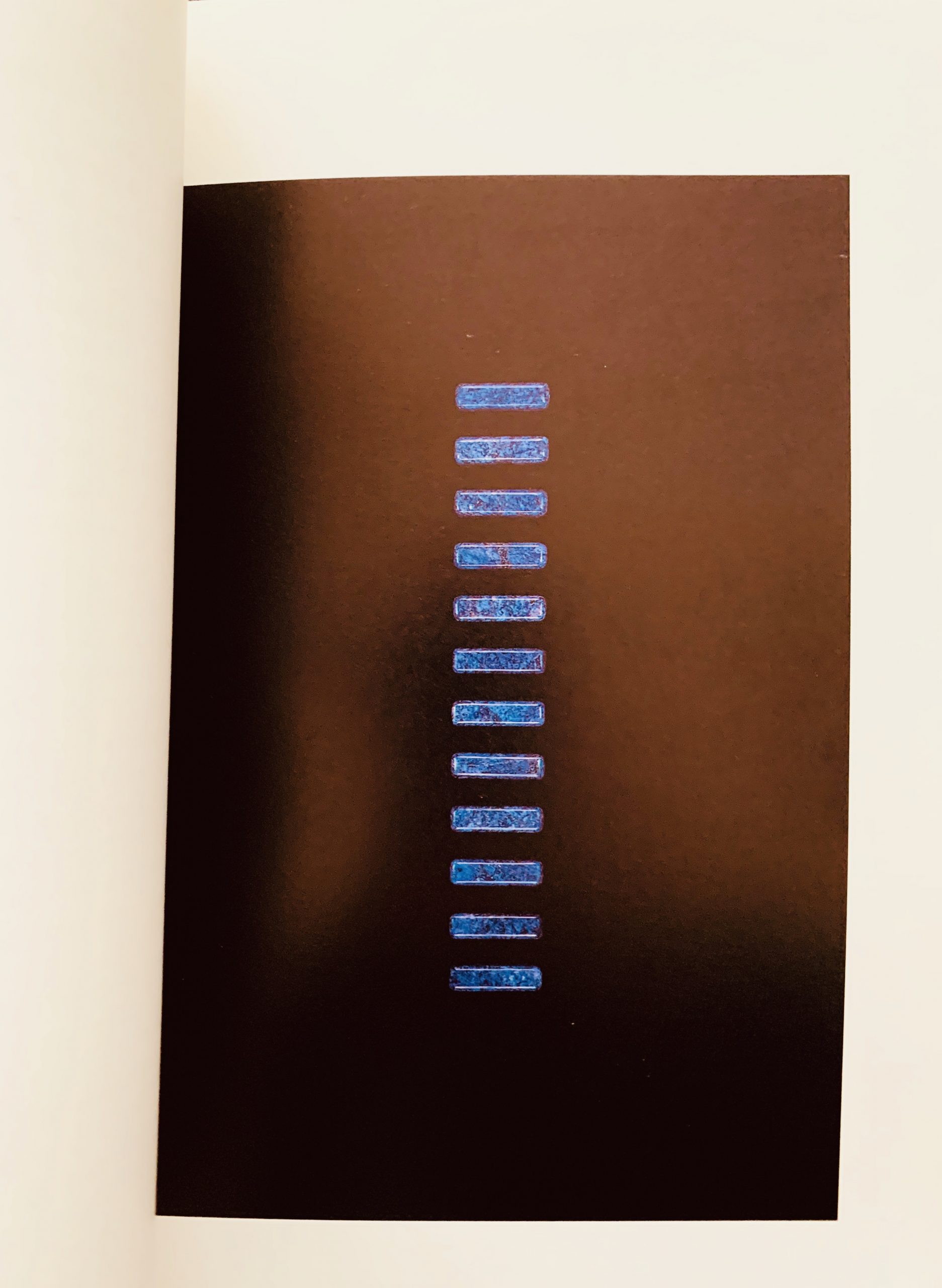 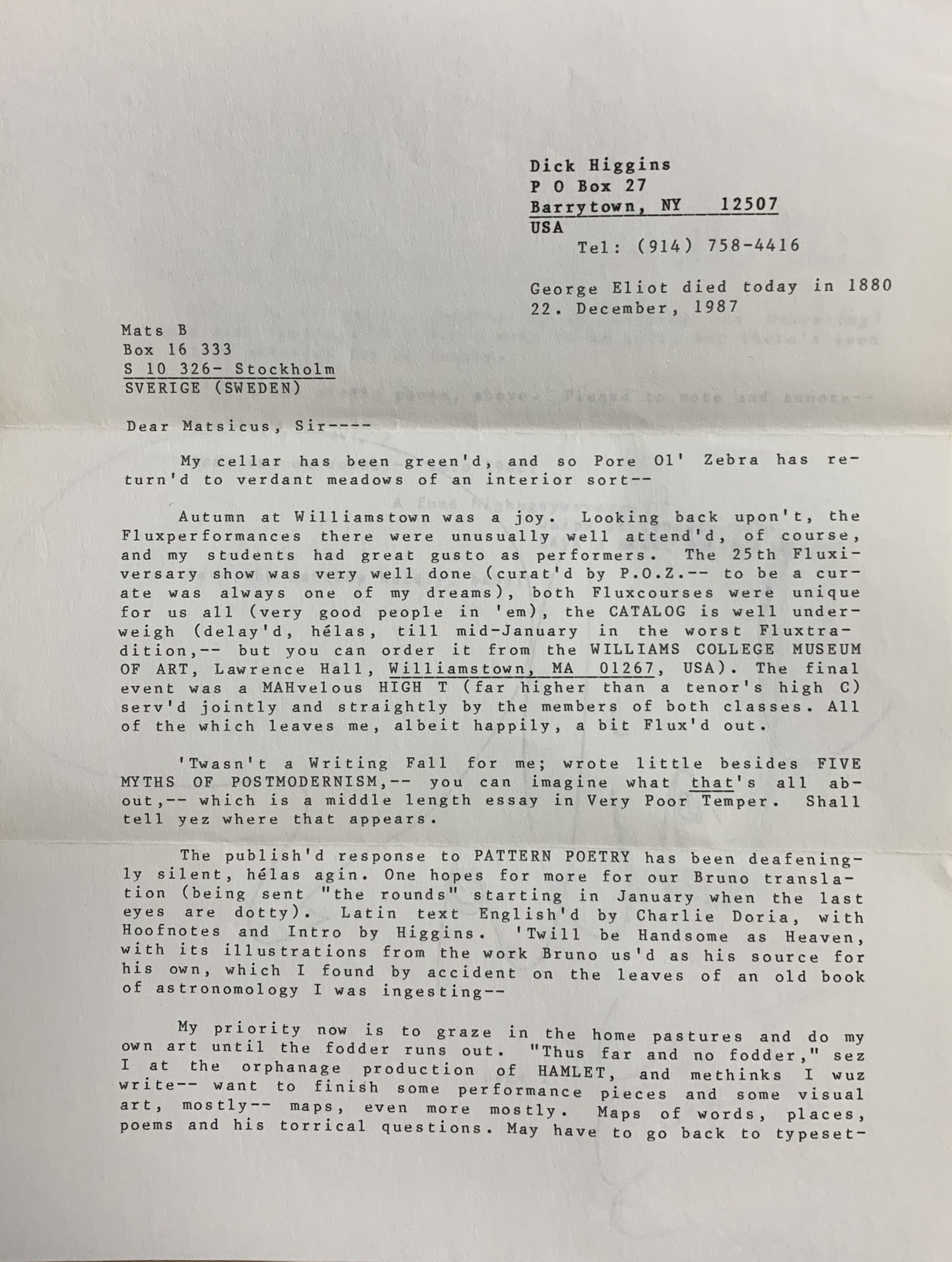 Tillhet-Pretnare, Jeanne TYPED LETTER TO MONSIEUR AND MADAME ERIC GERMAIN. Signed and dated 17 Mars 1992 30 x 21cm, 2pp - a legal opinion about Byars use of the Gallimard cover style written to two of Byars’ patrons in France. Antoine Gallimard had taken offence and tried to protect his copyright on the design. The letter warns of possible legal action and the impossibility of defending the publication if another was produced.... 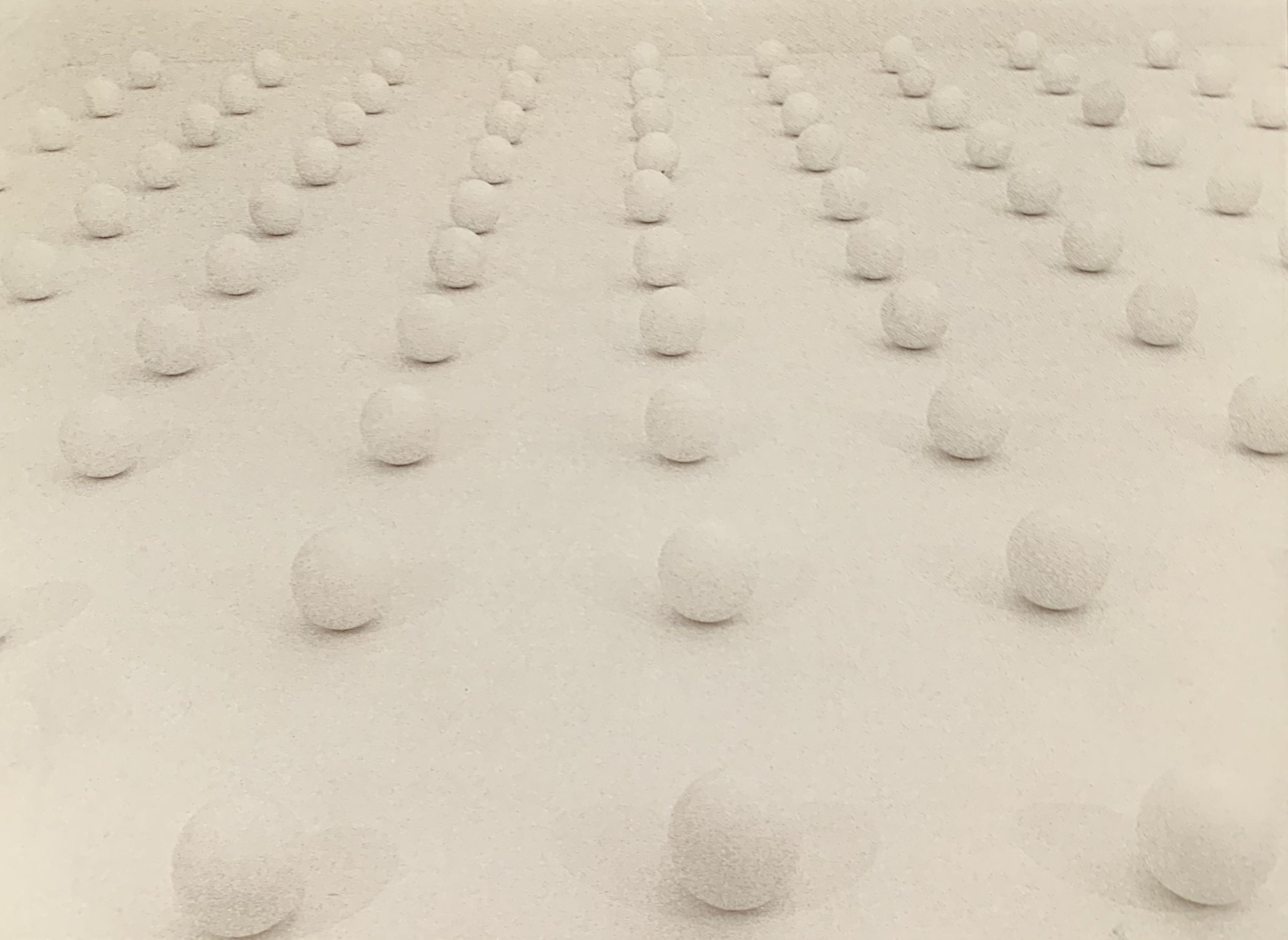 NYC: Mary Boone, 1992
15.5 x 21cm, 4pp. Announcement card for a solo show by Byars including the large title installation of marble spheres on a large stone field. Inside gallery details. This example has some red ink and a rubber stamp impression inside "Artist's File" else VG+.

Posted at 19:29h in EXHIBITION CATALOGUES

Munich: Galerie Bernd Kluser, 1992
22 x 15.5 x 3cm printed slipcase content of two volumes. Uniformly 22 x 15cm, 92pp and 132pp respectively plus boards and printed dustjacket.
The exhibition catalogue of a group show based on the artists' reaction to the 1926 discovery of the frozen corpse of a leopard at 19,000 feet on Kilimanjaro - a height above where one might not expect such an animal to be found. Hemingway mentions this find in his book "The snows of Kilimanjaro" it being so unusual. The exhibition was based on a number of prints commissioned from each artist by the gallery and issued in two portfolios an edition of 60 copies.
Boltanski's print in portfolio II is a collaged image of a Jewish school from Berlin 1939 - the original photograph overlaid with crumpled transparent paper to slightly mask the image and with packing tape at the corners before being rephotographed. The final print is printed on transparent paper which adds to the feeling of heritage or of coming from a past time - something that mimics some perceptions of the found body of the dead cat.
Other artists found in the two portfolios (volume I and volume II) were Georg Baselitz, Per Kirkeby, Enzo Cucchi, Juliao Sarmento, Mimmo Paladino, Axel Katz, James Brown, Nicholas Africano, A.R. Penck and Donald Baechler; Volume Two features Jannis Kounellis, Maichael Byron, Rebecca Horn, Martin Disler, A.&P. Poirier, Stephan Blankenhol, Jan Fabre, and Tony Cragg as well as Boltanski.
All of the prints are reproduced in colour in the first of the two volumes in this catalogue.
The second volume here displays the various works shown in the group exhibition - Boltanski's was "Les Images Honteuses 'El Caso'" displayed in 3 vitrines and on the wall in a be-curtained image. El Caso includes images of murders and other similar tragedies - the curtain being a sort of removable censorship forcing the viewer to decide whether to look or not.
Short essay text in Enlgish and German by Bernd Kulser. VG+ although a few marks on the slipcase.
... 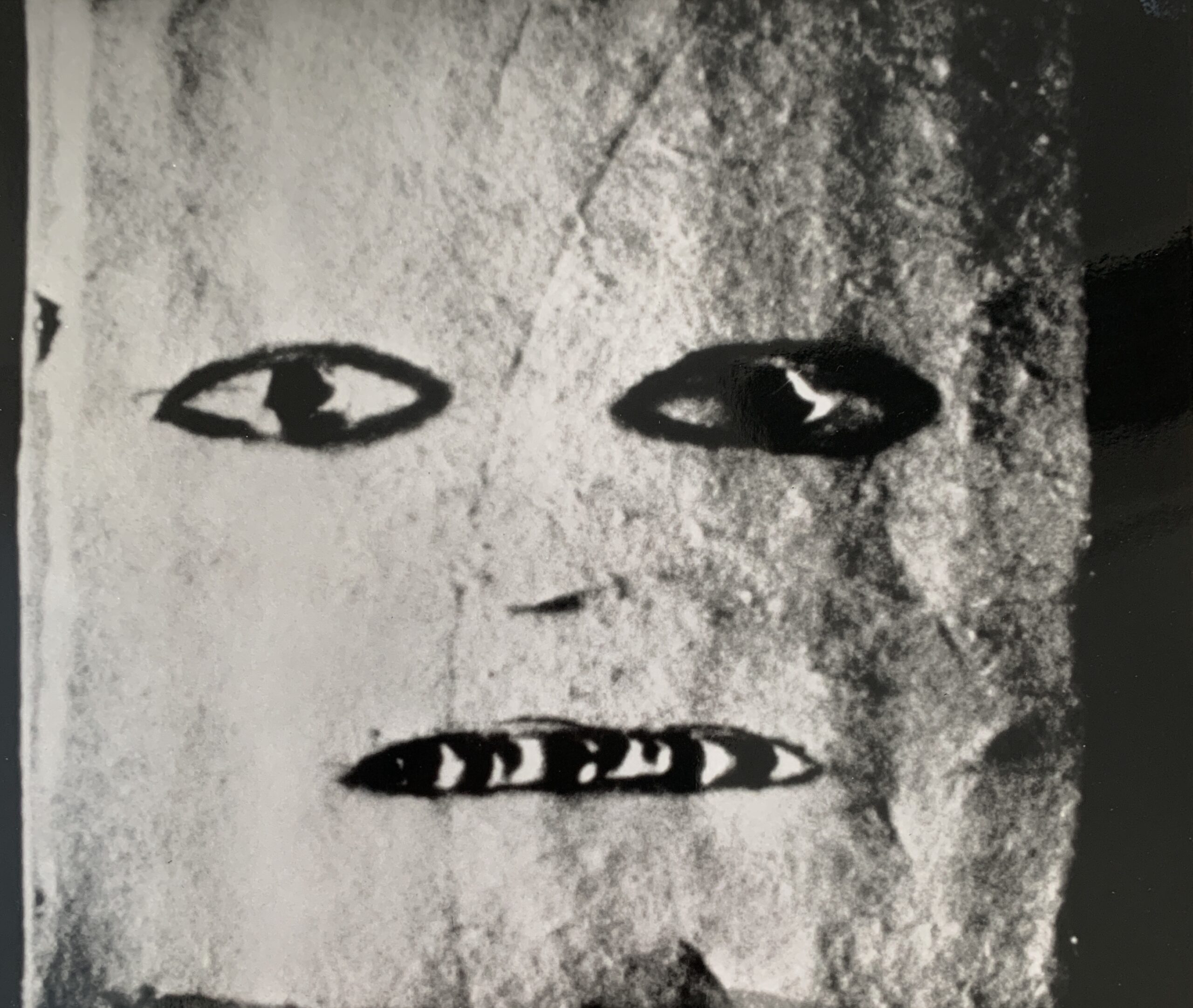 Posted at 13:39h in PHOTOGRAPHS