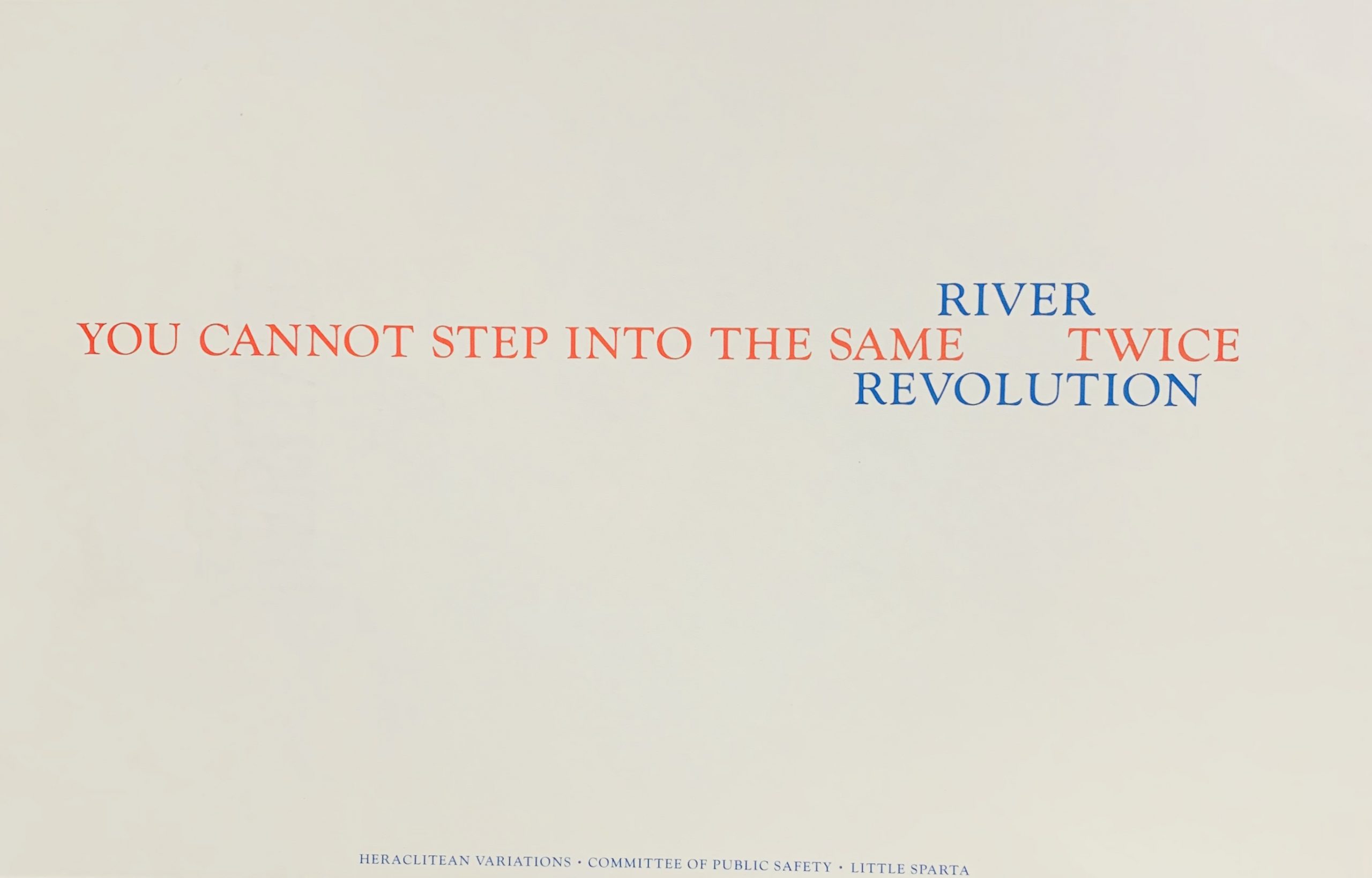 Little Sparta: Wild Hawthorn Press, 1994
18.9 x 29.8cm, red and black on cream offset lithograph. The text "YOU CANNOT STEP INTO THE SAME RIVER/REVOLUTION TWICE" allows two readings of the statement - first the famous Hereclitian statement comparing the flow of a river that isnever is the same with any point in history . And then FInlay's bold assertion here that that is also true of all revolutions. . VG+. 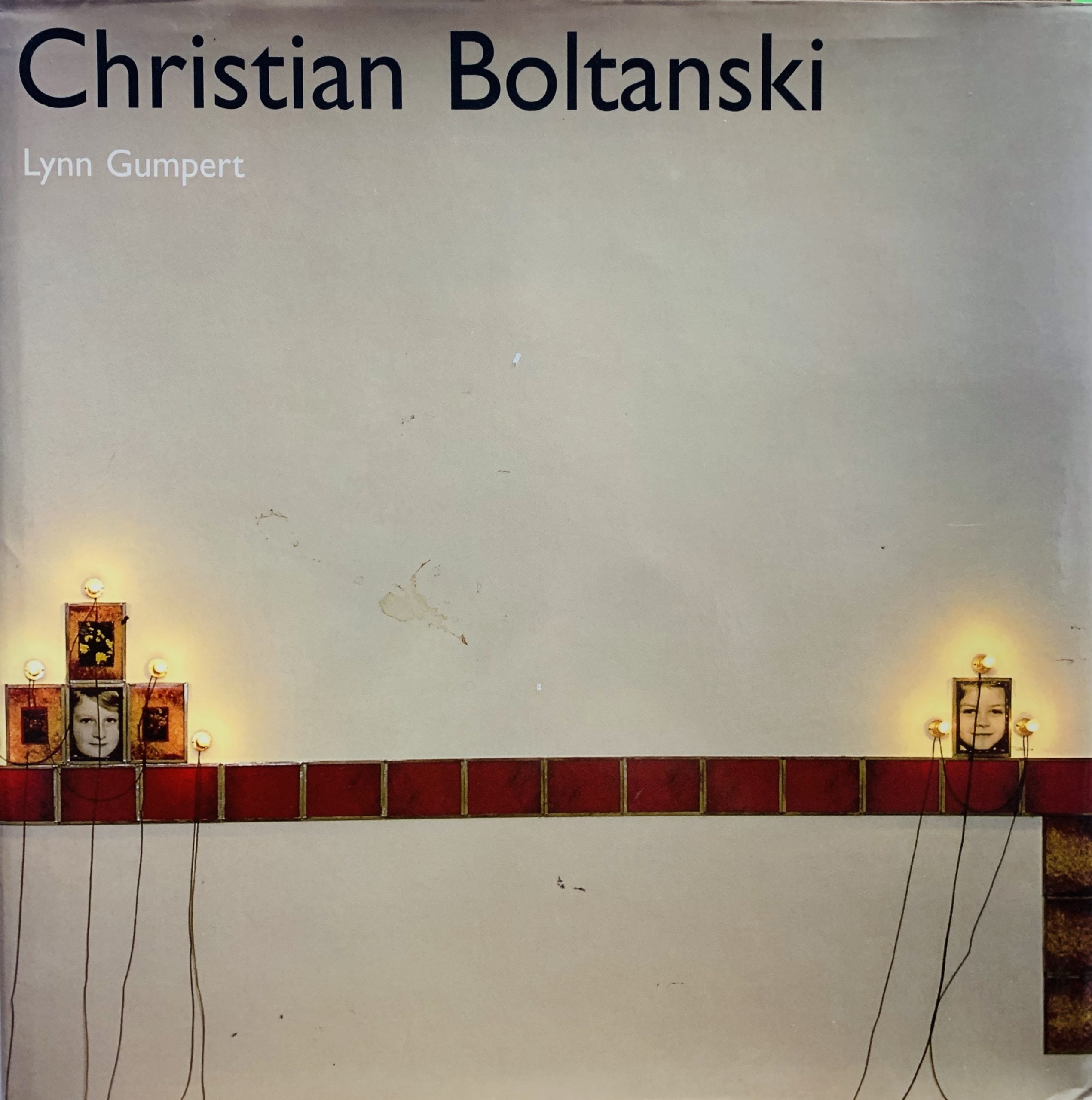 Posted at 14:37h in MONOGRAPHS

Paris: Flammarion, 1994
27 x 26cm, 192pp plus boards and colour pictorial dust jacket. First edition of this extensive monograph with over 200 illustrations of which 50 are in colour. Essays and interview by Lynn Gumpert. VG+. 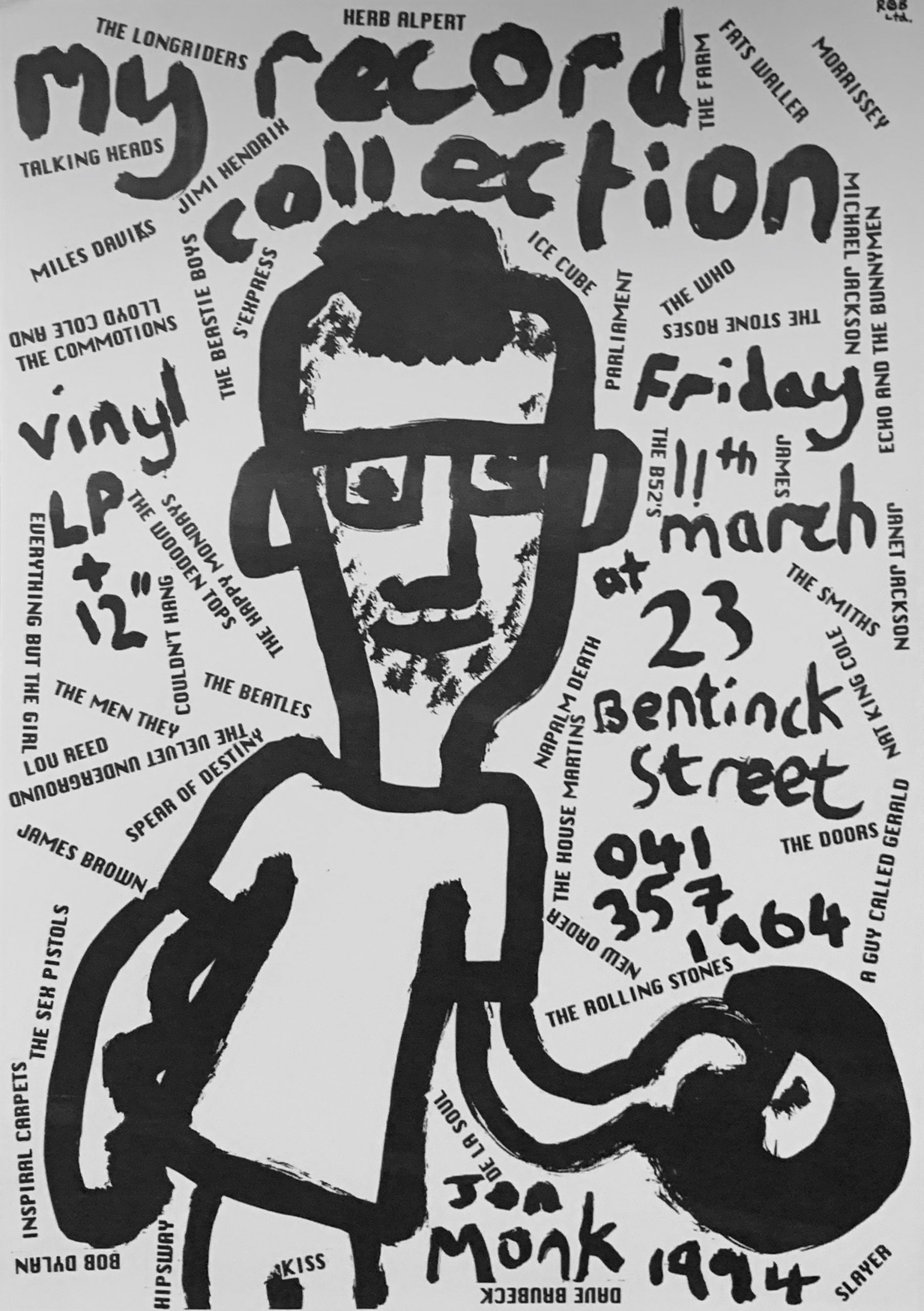 Glasgow: s.p. (monk), 1994
21 x 15cm,1pp announcement card with a drawing by Monk (of him holding a record and surrounded by texts) for this the artist's second ever public exhibition. VG+. Rare.

Six different 24x14 cm thin sheets of wood veneer with the formula 4 * 5 = 20! in Byars’ starry writing using red ink. A unique work - mounted in a glass and wooden frame. Please note: this work is found reproduced on some other dealer's websites despite the fact we have owned it for over 12 years, exhibited it publicly and have asked them to take it down!... 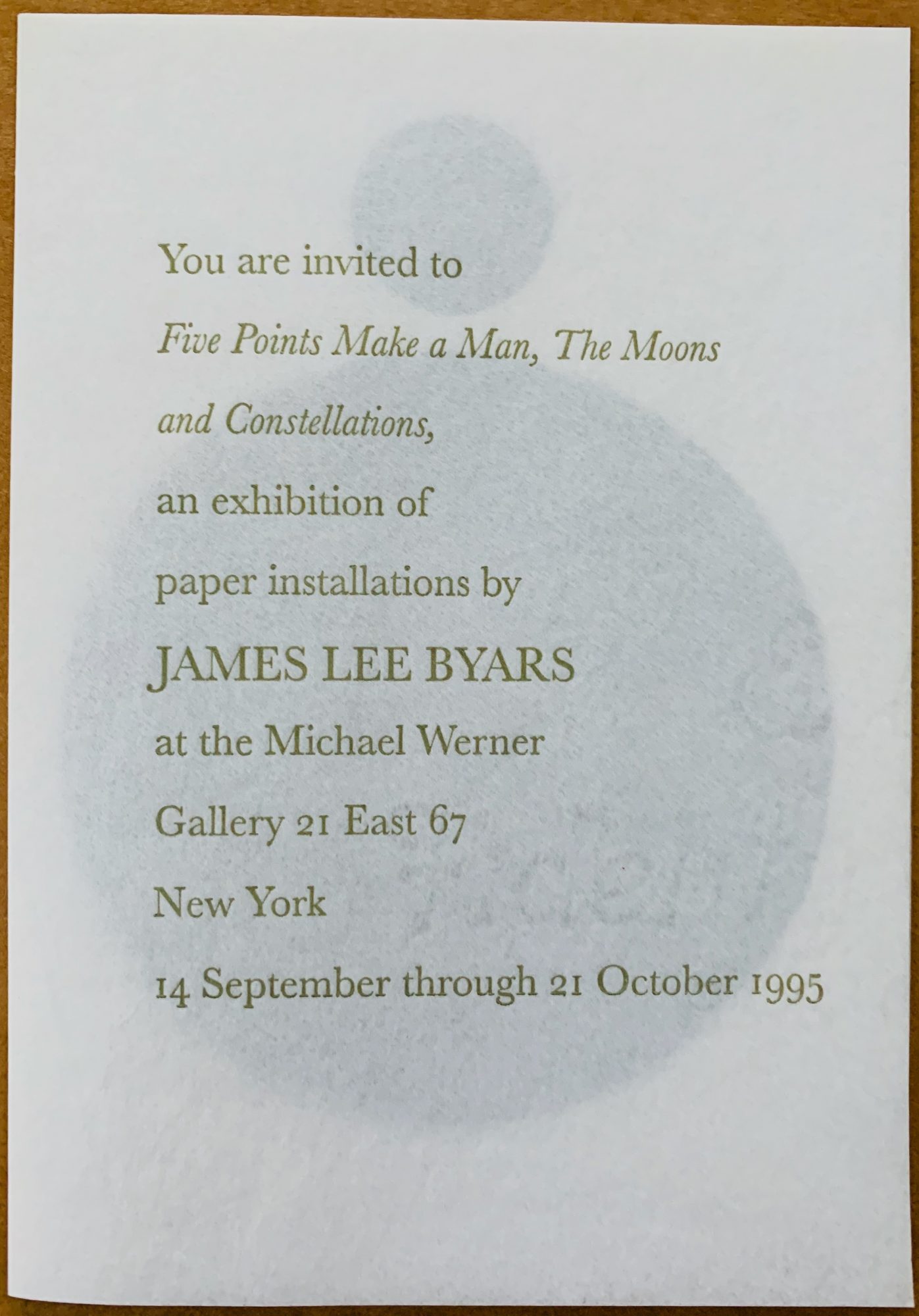 Little Sparta: Wild Hawthorn Press, 1994
10.8 x 10.4cm, 16pp plus patterned boards. The proposal here takes the form of a photograph of the site with a pull back tipped on flap that shows the landscape without the lake side temple and when pulled aside one can see the proposed building. Saint-Just was termed the "Angel of Death" by his opponents during the Terror because he was often the delegate who announced the name of those to be arrested (and often killed) at the National Assembly. Apollo is the Greek god of amongst other things justice. Both might be regarded as being capable of severe judgement. Photomontage by Peter Rogan.
BR>... 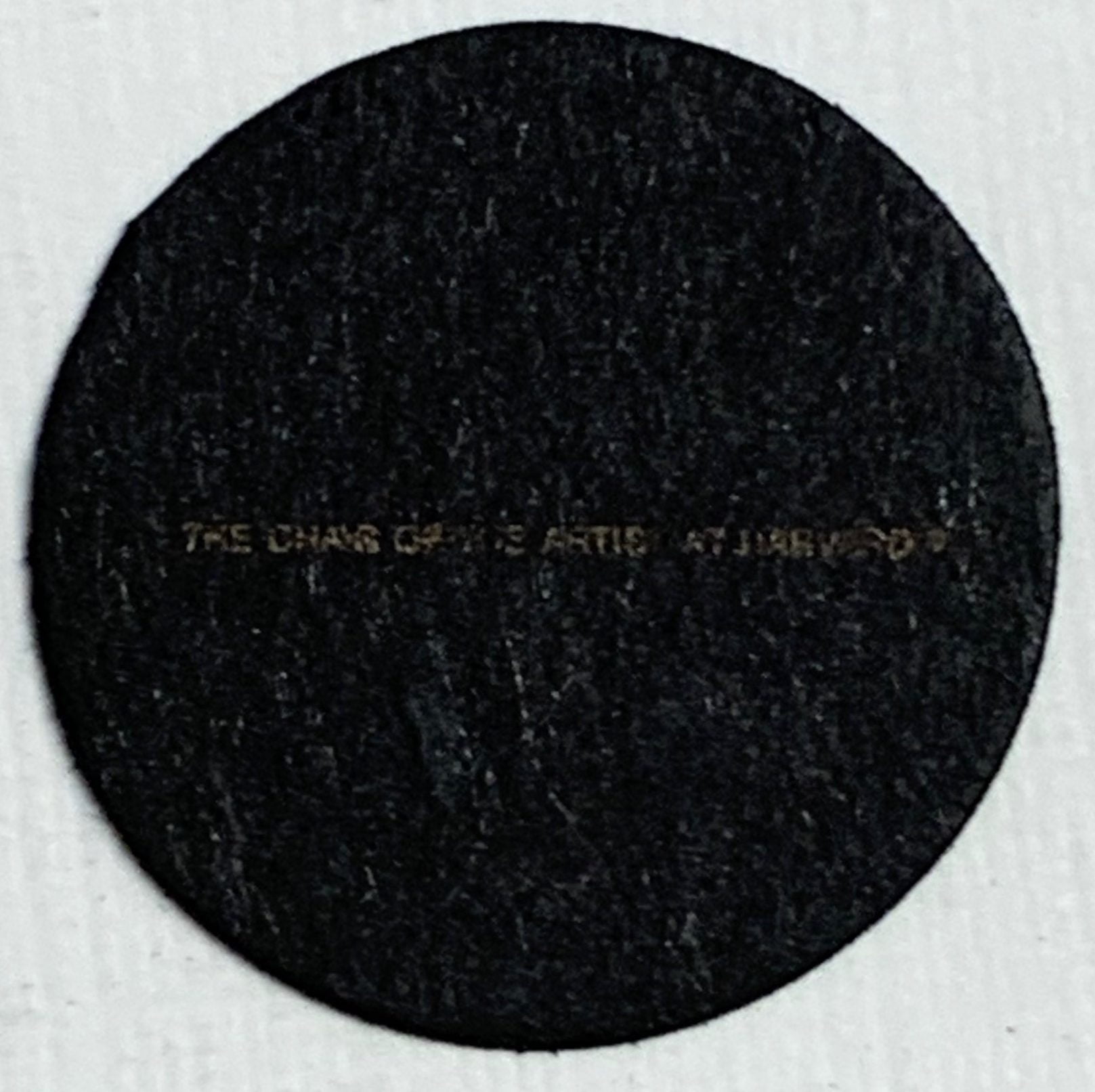 Eindhoven: Van Abbemuseum, 1994
1.7cm dia. black circle with the text THE CHAIR OF THE ARTIST AT HARVARD printed in tiny typeface in the centre. Unlimited multiple but now very hard to find. VG+. There are three known variants of this multiple - a small black circle, a larger black circle and a 2.5 x 2.5cm black square.