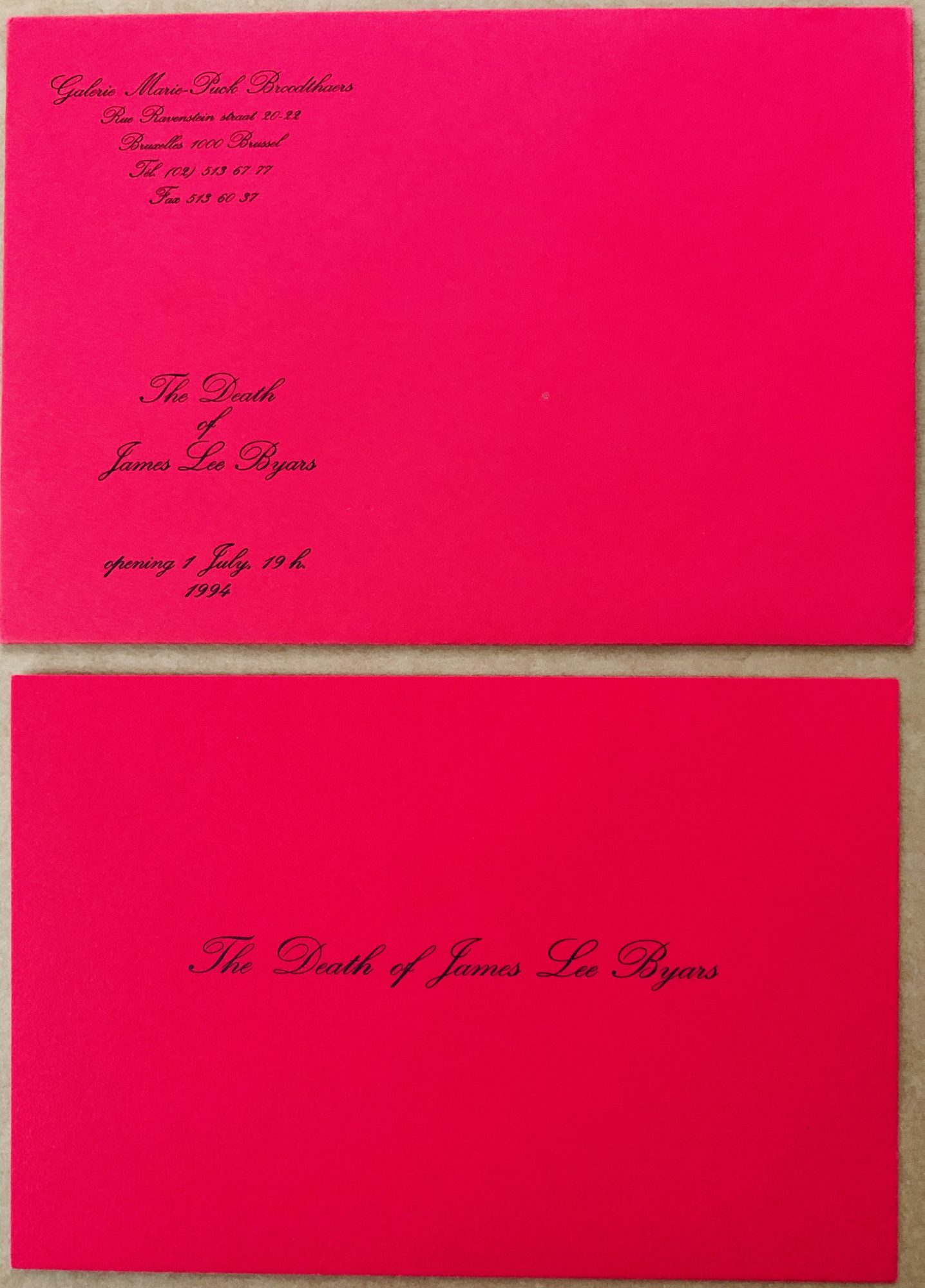 Posted at 19:14h in EXHIBITION CATALOGUES

Aachen: Ludwig Forum fur International Kunst, 1994
29.5 x 21cm, 20pp plus card covers. Exhibition catalogue which is heavily based on the catalogue from Museum of Contemporary Art, Chicago, Lessons of Darkness 1988. The text is an extended biography illustrated chronologically by works in b/w but updated to 1994. VG+. 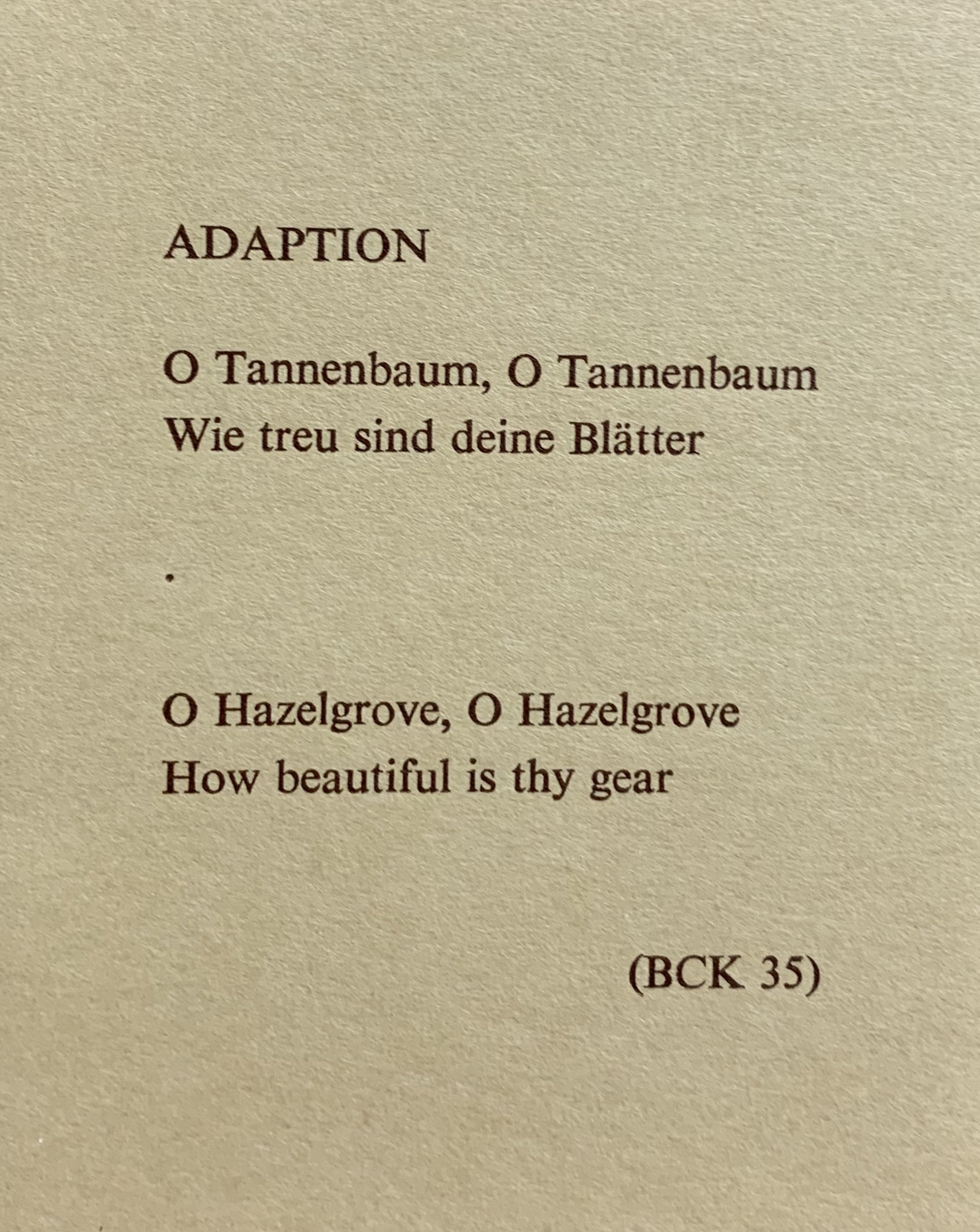 Posted at 09:45h in Artist's Postcards

Hazelgrove being the name of a trawler - BCK 35 - out of Fleetwood. The gear being its equipment. (The number is now allocated to a new ship). VG+.

Malmo: Malmo Konsthall, 1993,br. 27 x 21.5cm, 1290pp plus original wrappers. Plus 27 x 21.5cm, 8pp printed insert. Artist's book which appropriated a telephone book from the Swedish city Malmo which Boltanksi placed a printed label on the front cover. Inside he circled an area of the district map using felt-tipped pen and additionally added an addendum of names and addresses and numbers as a separate insert which claims "You cannot call these inhabitants of Malmo, they died in 1993".
This book is one of only 25 signed copies (on the inside cover) aside from the unsigned edition of 400 issued during the exhibition "Christian Boltanski" in Malmo. The book is in original mailing box sent to M. Berg. 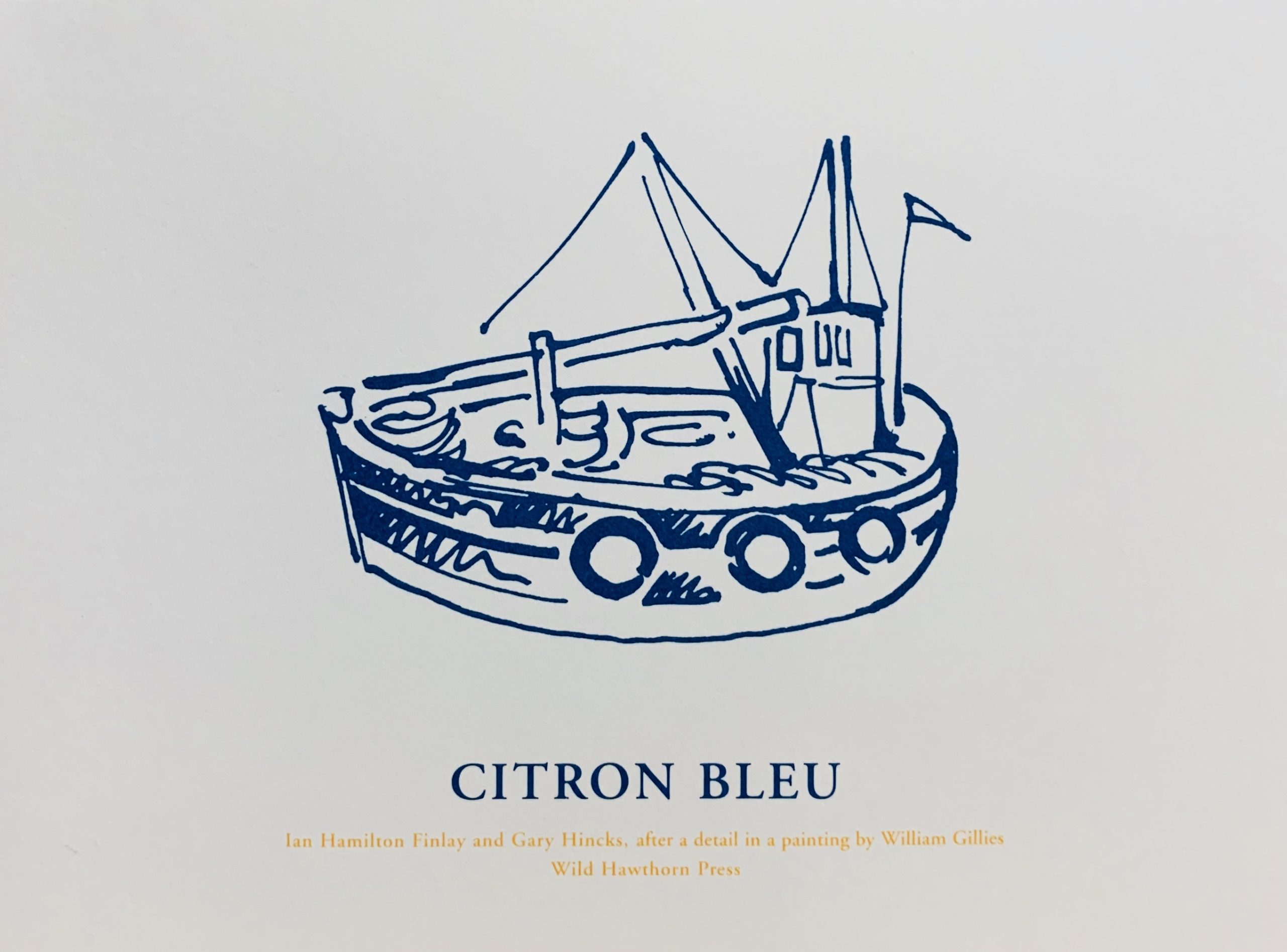 Posted at 09:40h in Artist's Postcards

Little Sparta: Wild Hawthorn Press, 1994
11.7 x 15.9cm, 1pp. Printed blue and orange on white card - the drawing of the boat is after William Gilles (as I write this I am only 100 m from Gilles former house) by Gary Hincks. Finlay often compares boats with lemons. VG+. 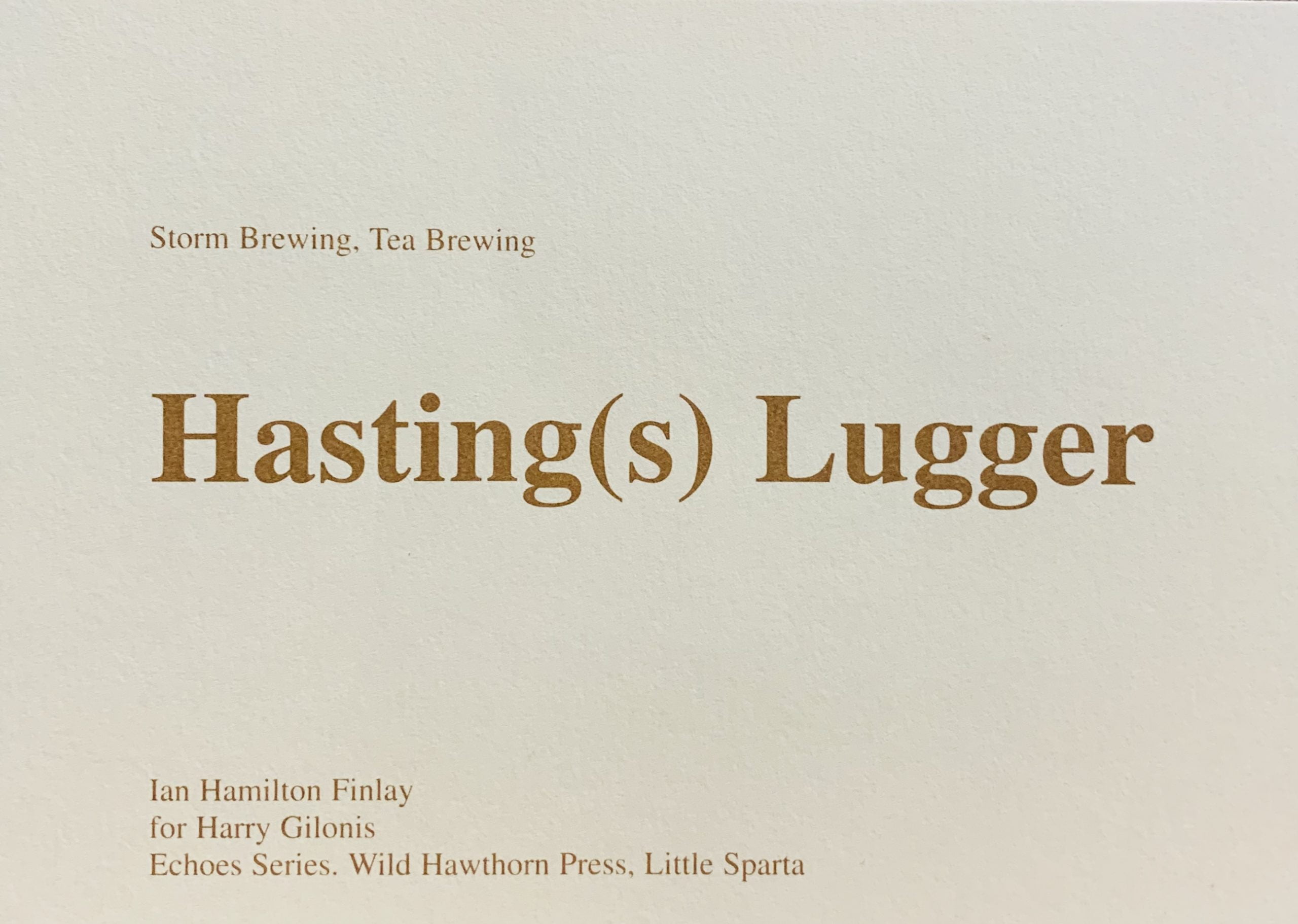 Posted at 09:34h in Artist's Postcards

Little Sparta: Wild Hawthorn Press, 1994
10.3 x 14.8cm, 1pp . Printed brown on light brown card - the HASTING(S) LUGGER has both the meaning of a boat and also a mild dig at Finlay's friend, the poet, Harry Gilonis (from Hastings). The boats were very large and sluggish with crews of ten and usually 3 masts. Above the main test is "Storm Brewing. Tea Brewing" - another comparison between boat and man. The print colour also being that of strong teas. VG+.

Posted at 09:24h in Artist's Postcards

Little Sparta: Wild Hawthorn Press, 1994
4.5 x 14cm, 4pp . The card has a definition work -
PLANK, n. a segment of the skin or rind of a small boat, especially a small fishing boat. See Lemon.
placed in a brown shape that resembles a boat. VG+.

Posted at 09:17h in Artist's Postcards

Little Sparta: Wild Hawthorn Press, 1994
Two cards in same format although one is printed blue on white, the other brown on white - each 6.7 x 10cm, 4pp (assymetric fold) . The cards both have PL on the front but when opened the blue card reads PL/OVER and the brown card reads PL/OUGH. Both are things (bird and farming equipment) that one would find in spring. The blue and brown, of course, reflecting the sky and dirt (blue and brown being often used by Finlay in part for the sky/earth dichotomy but also an oblique reference to Wittgenstein). VG+ in like envelope. 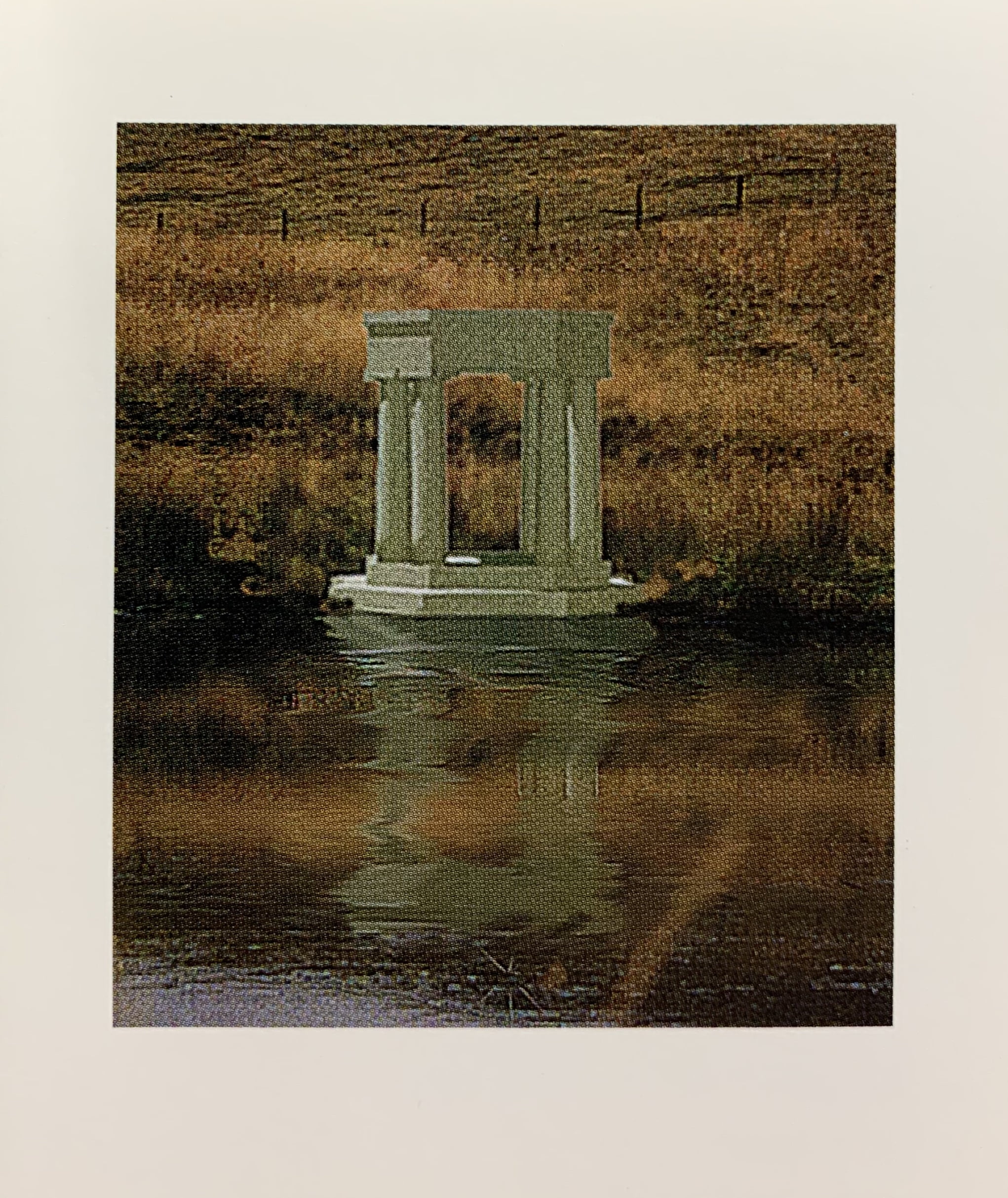 Posted at 08:52h in Artist's Postcards

Little Sparta: Wild Hawthorn Press, 1994
8 x 6.8cm, 4pp card with a digital photographic montage of the proposed temple along with a poem by Finlay internally:

Near
the donkey's fence
the rowing boat
leaves
for the Claude.

Claude is perhaps Claude Lorrain painter of idealised landscapes often looking out to see with a sunset causing a sense of wanderlust but the word is similar to the Clyde; the Scottish river that begins at the Falls of the Clyde which is not so far from Dunsyre and Little Sparta. The rowing boat also is perhaps being compared to an upturned leaf in its leaving.
Finlay also produced an artist's book as a proposal for this monument which again compares one thing - the vengeful god Apollo with Saint-Just another famously judgemental figure. VG+. 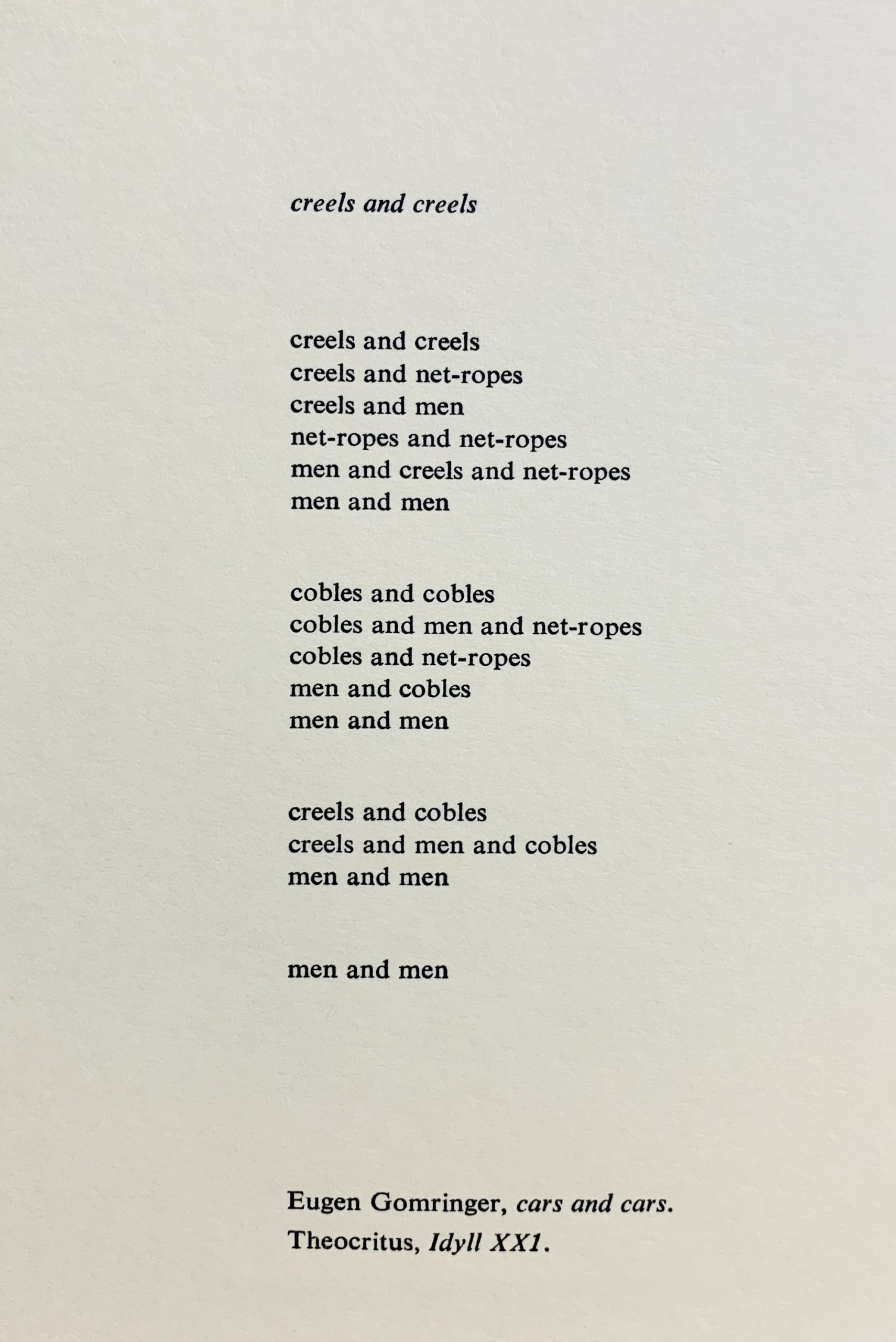 Posted at 23:35h in Artist's Postcards

Little Sparta: Wild Hawthorn Press, 1994
12.1 x 8.3cm, 2pp card with a poem by Finlay after Eugen Gromringer's "Cars and Cars" although Finlay moves the context to that of fishermen and their boats. Finlay also notes Theocritus, Idylls XXI - The Fishermen - where two fishermen discuss a dream in which one sees a golden fish and after discussing the meaning of the dream, they come to the realisation that their wealth will come from their catches. Finlay repeats (after the original) in different combinations the images of creels, men, net-ropes, cobles - each creating a subtly different image ending with "men and men". VG+. 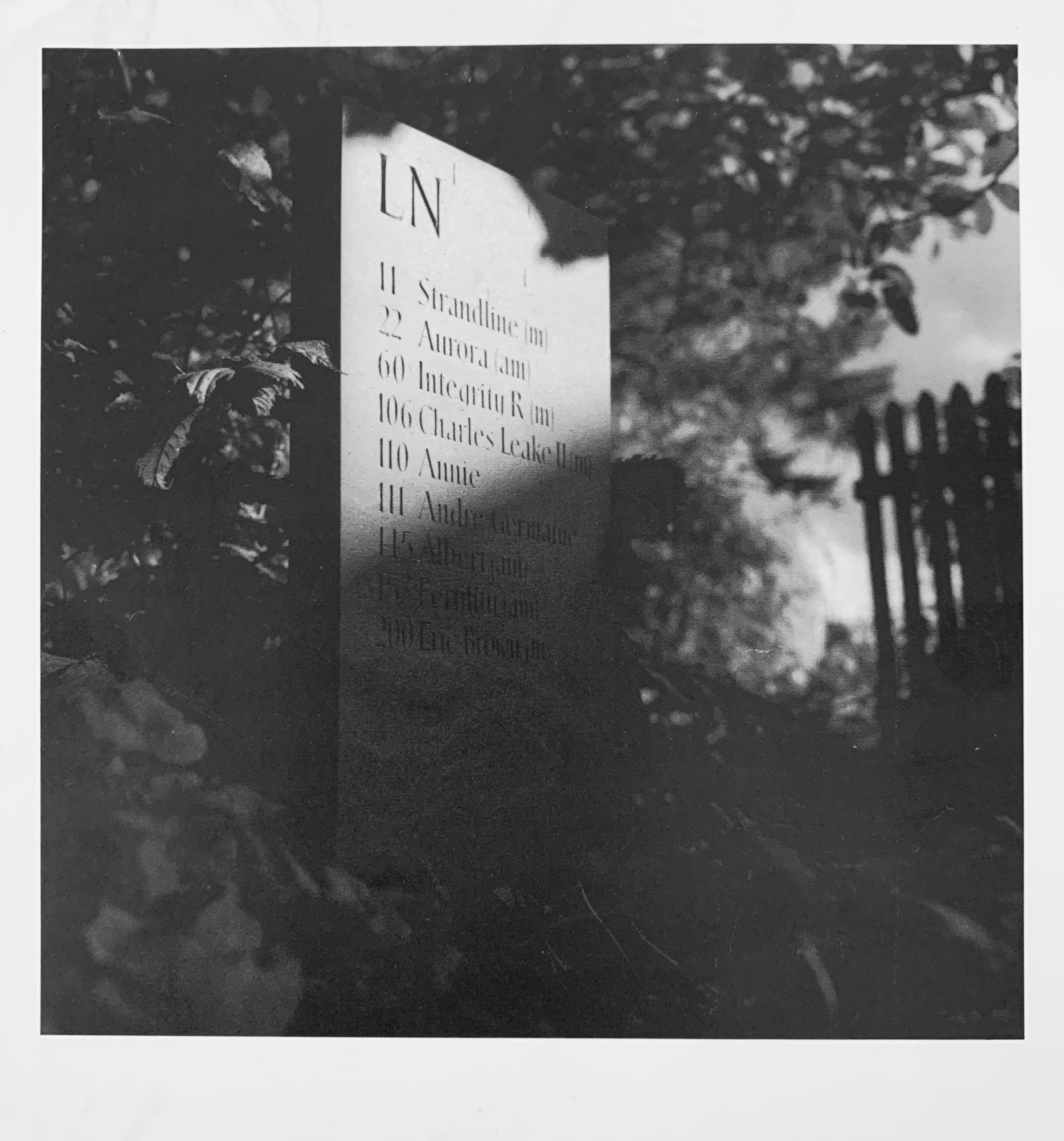 Posted at 17:25h in Artist's Postcards 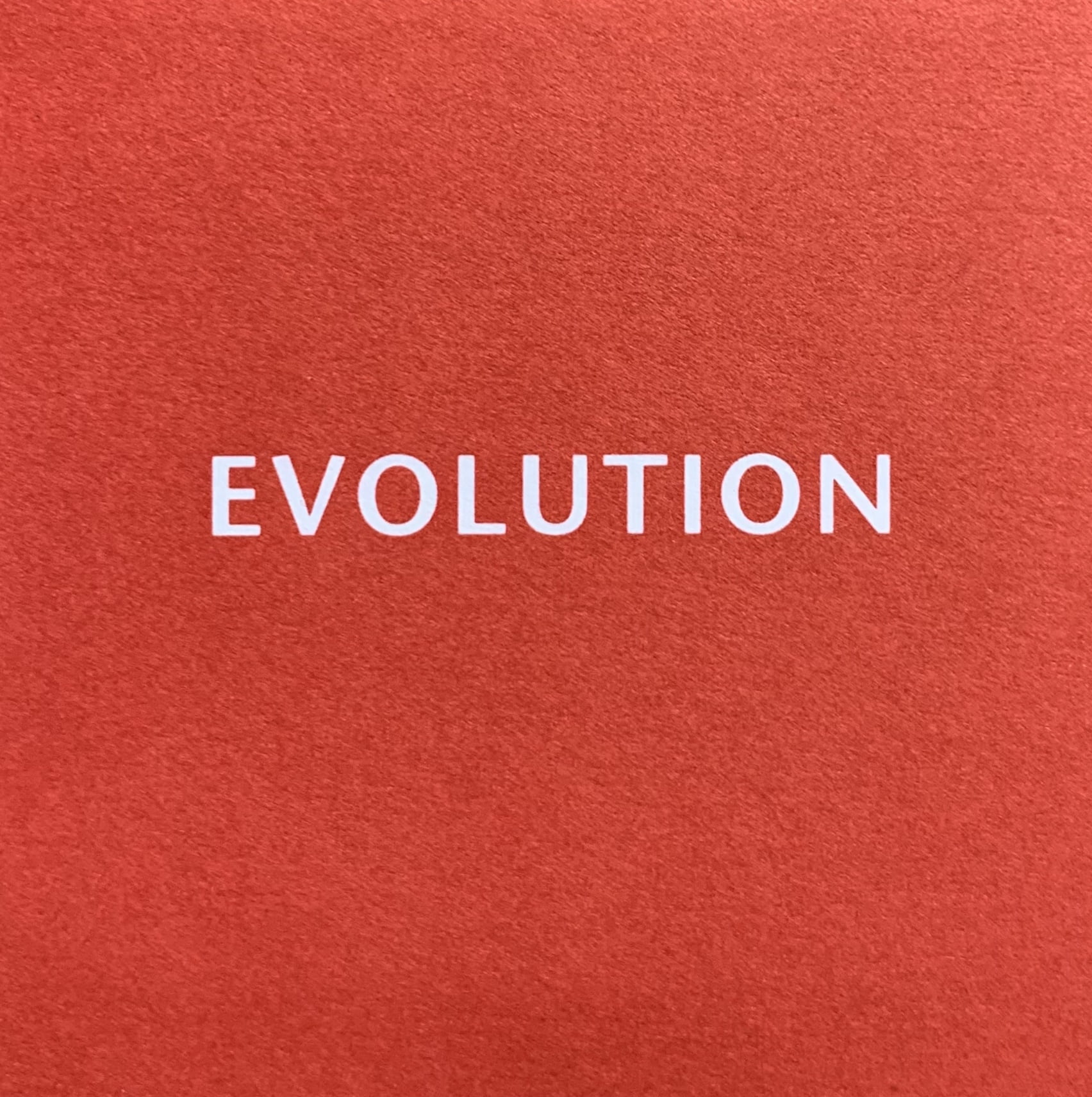 Posted at 23:54h in Artist's Postcards

Little Sparta: Wild Hawthorn Press, 1994
6 X 6cm, 4pp outer card with a 5pp concertina folded sheet tipped on that opens up to 5 x 23.5cm list of all the monarchs of France from Louis Premier to the deposed and beheaded Louise Seize and finally the last name is Louise David the revolutionary painter who documented in paint the events from before 1789 to Napoleon and to the restoration of the Bourbons hence David is the culmination of the succession and the most noble of the men listed. VG+.