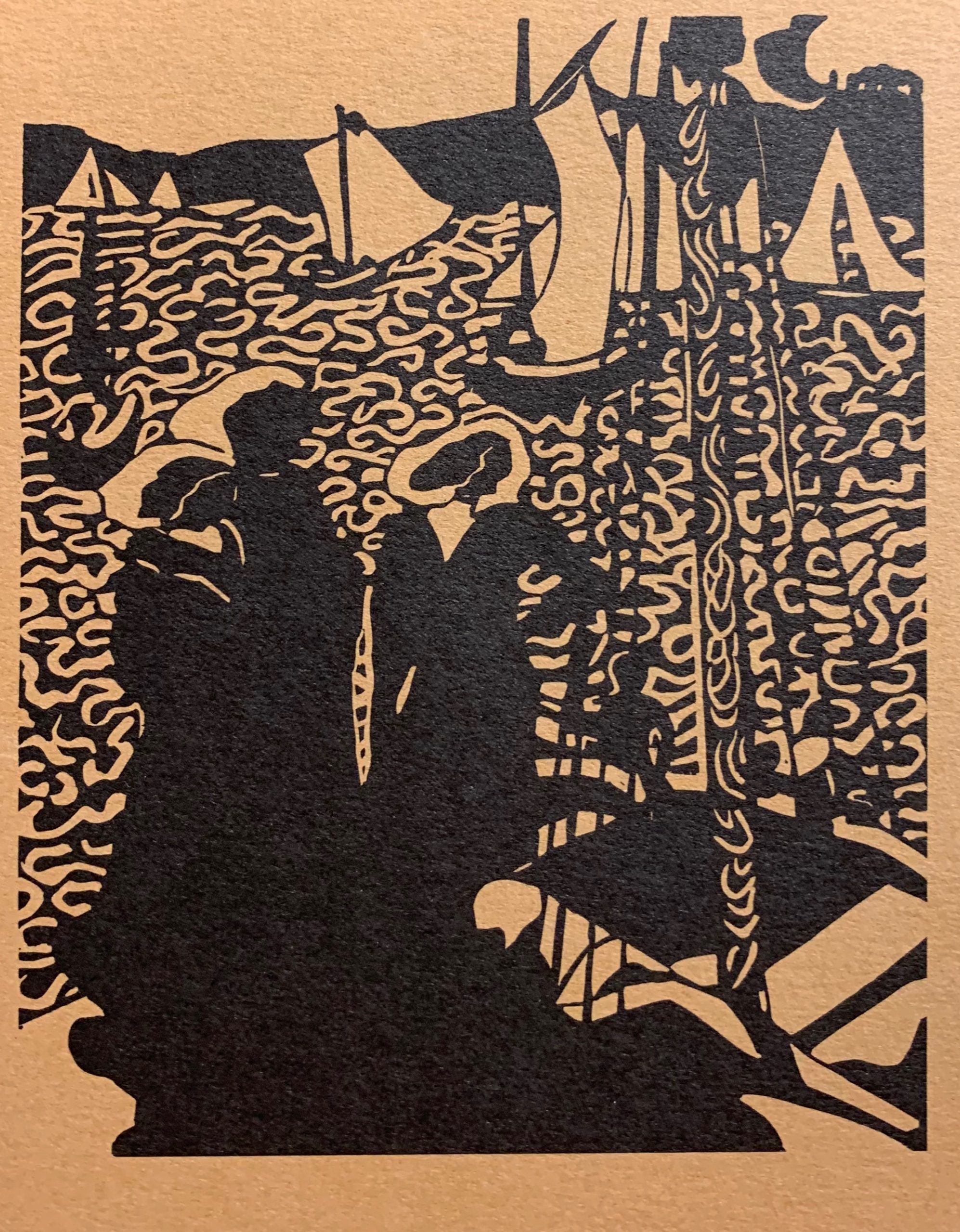 Posted at 10:33h in Artist's Postcards

The poem suggests that nothing much has changed in these Breton fishing villages, life is a repeating refrain. Finlay also quotes Caroline Boyle-Taylor on this "The painters felt that the peasants' lives had not changes since medieval times". Maurice Denis - the source for the original image - was one of the Symbolists and Les Navis who often documented small communities on canvas especially fishermen. VG+. 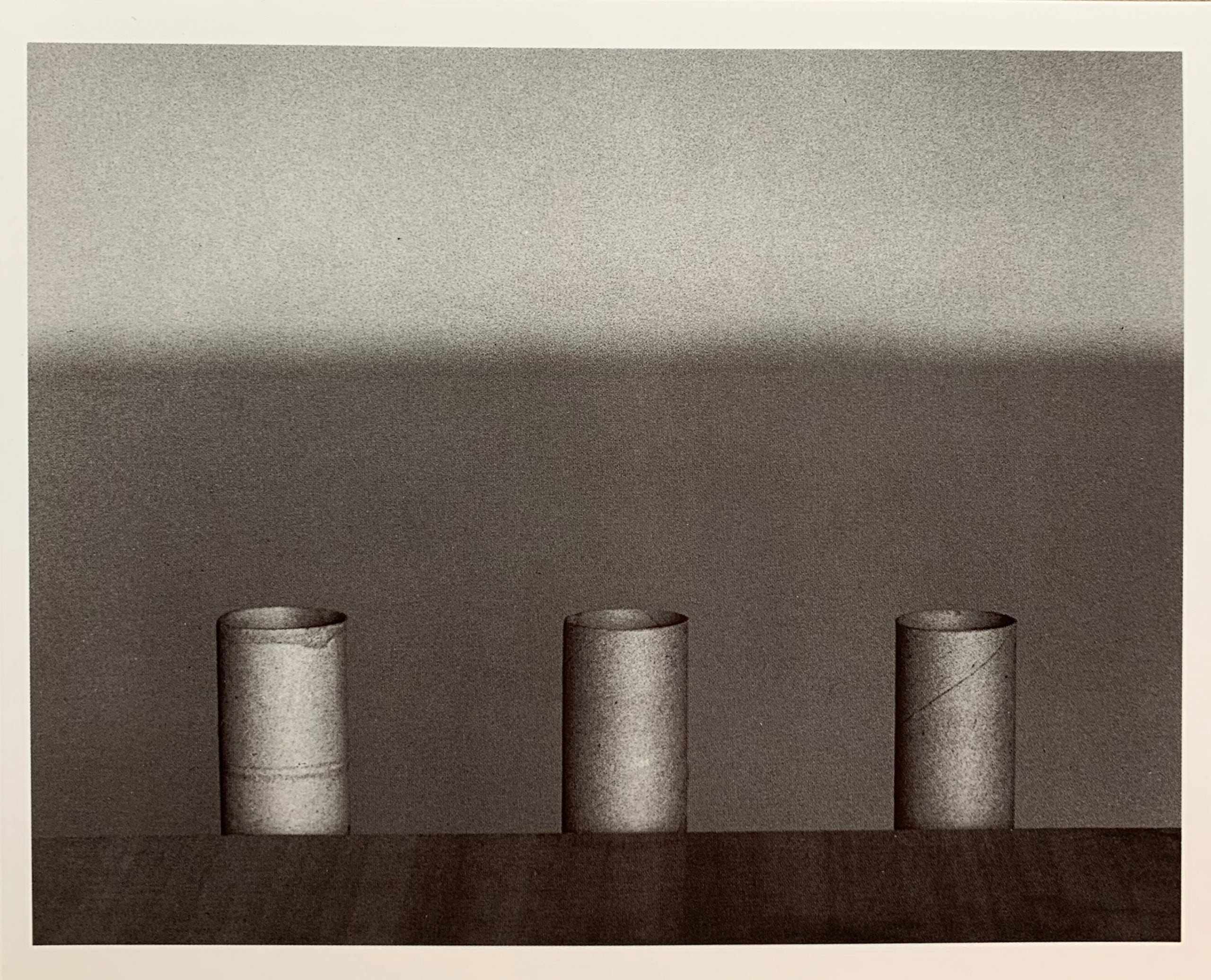 Posted at 10:29h in Artist's Postcards

Little Sparta: Wild Hawthorn Press, 1996
13.2 x 16.5cm, 2pp card with a b/w photograph by Robin Gillanders of three toilet rolls that have been painted and place on a table such that the image looks like the funnels on a steam boat. VG+. 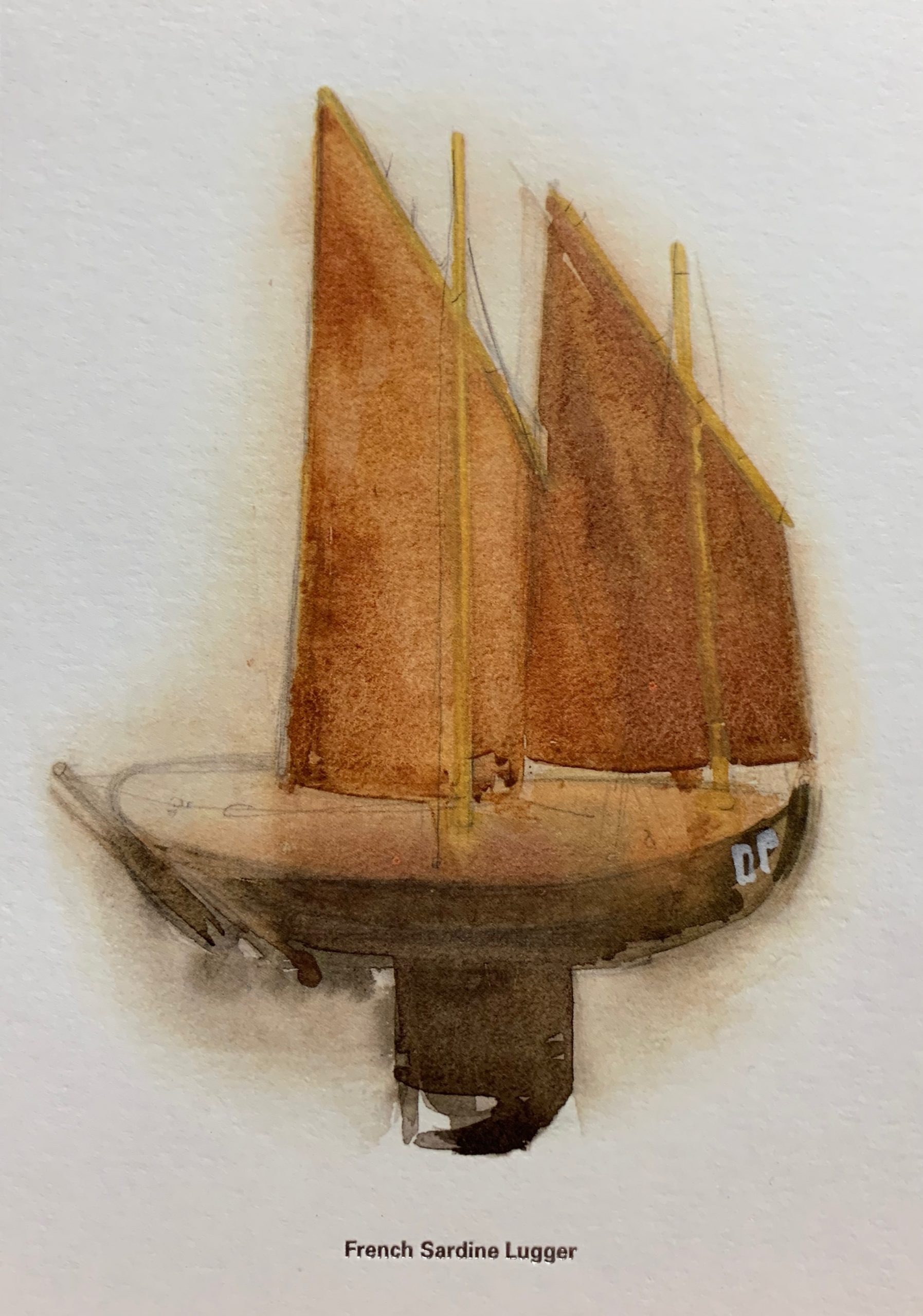 Posted at 10:20h in Artist's Postcards

Little Sparta: Wild Hawthorn Press, 1996
17.7 x 12.5cm, 2pp folding card with a watercolour by Janet Boulton after a boat model by Ian Hamilton Finlay identified as a "French Sardine Lugger". Boulton did a number of such paintings and Finlay seems to have enjoyed them. VG+.

Llandudno: Oriel Mostyn, 1996
28 x 22cm, 40pp plus boards, First edition of this artist's book with a commentary by Harry Gilonis published on the occasion of an exhibition in North Wales. One fold out page. A series of linocuts by Jo HIncks illustrate one line poems by Finlay all of which are marine scenes.

"A grey shore between day and night" is "dusk" with an image of a boat.

Posted at 10:13h in Artist's Postcards

Faint,
Lingering
Under
The
Elms

Faint,
Lingering
Under
The
Eaves

Both poems have the word FLUTE made up of their first letters and this indicates that both poems should be associated with sound. The former with birds in the trees (the birds' home), the second with sounds in a home. Finlay finds both sounds "enchanting" and magical one assumes. A pretty card. VG+. 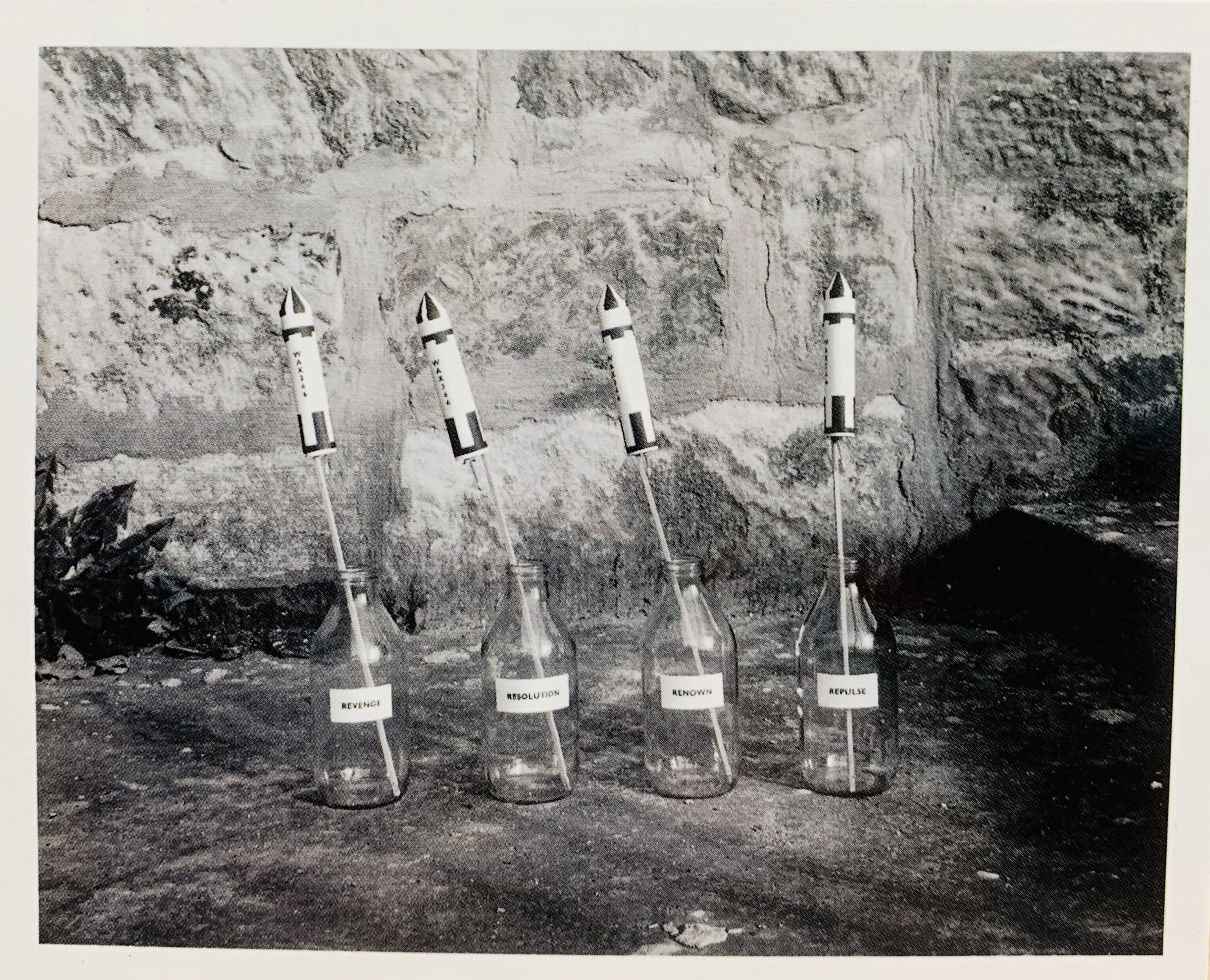 Posted at 16:12h in David Bellingham

Glasgow: Wax366, n.d. (1996)
10 x 12.5cm, 2pp artist postcard with a b/w image of rocket fireworks in bottles labelled Revenge, Resolution, Renown and Repulse (all names of the Resolution class of nuclear ships which were retired from active service on28th August 1995 and replaced by the Vanguard class which carry Polaris missles). There is a handwritten note on the back "This is the fireworks piece I mentioned. If Tony (Blair) gets his way it will have to be updated. Best, David" in pencil. VG+ 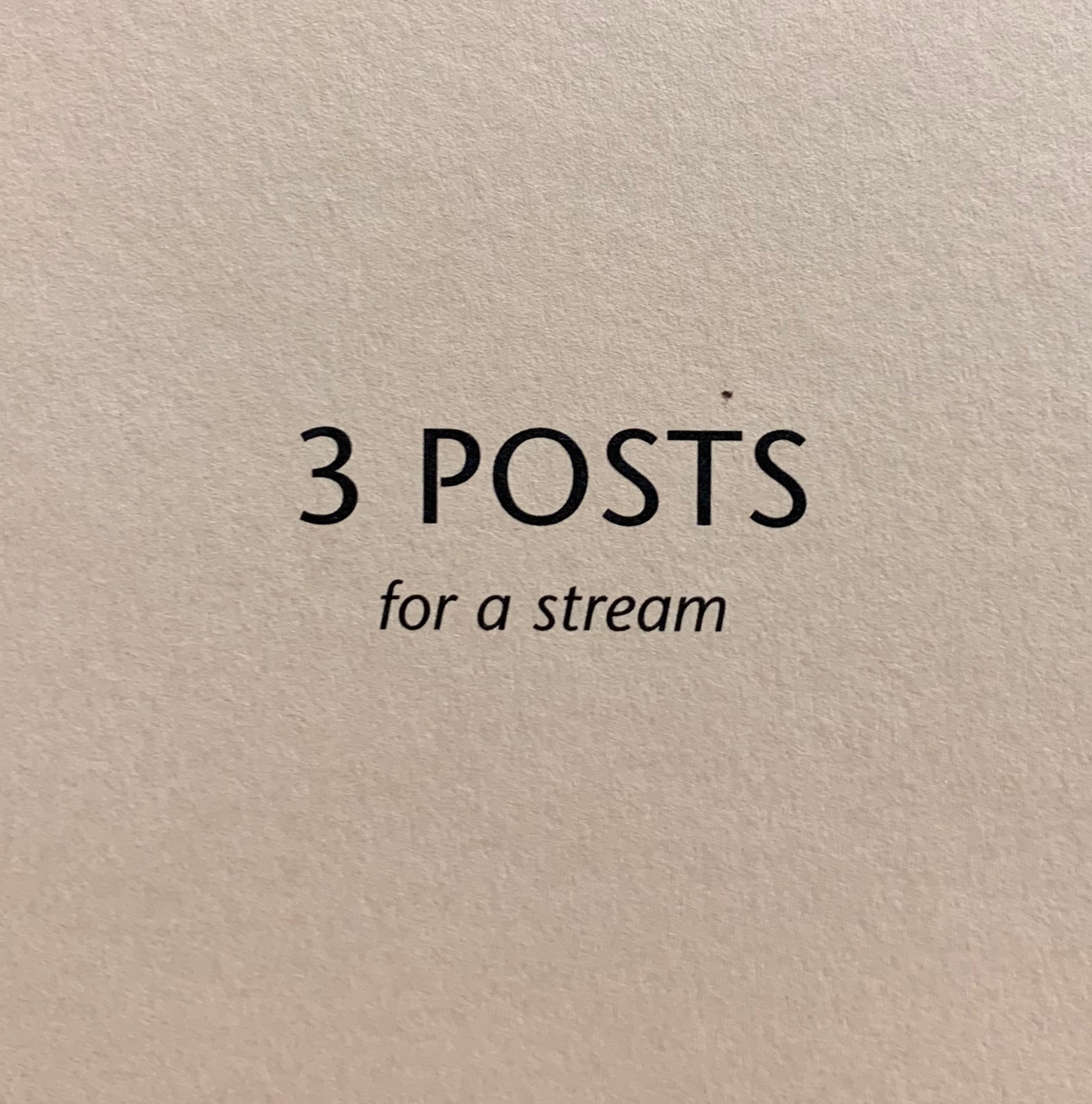 Posted at 10:06h in Artist's Postcards

Each recombination infers a different poetic image - the first the similarity between a floating leaf and a boat, the second the wood that makes up both boat and bark (bark peeled away will form a hollow structure) and finally the tree itself. VG+. 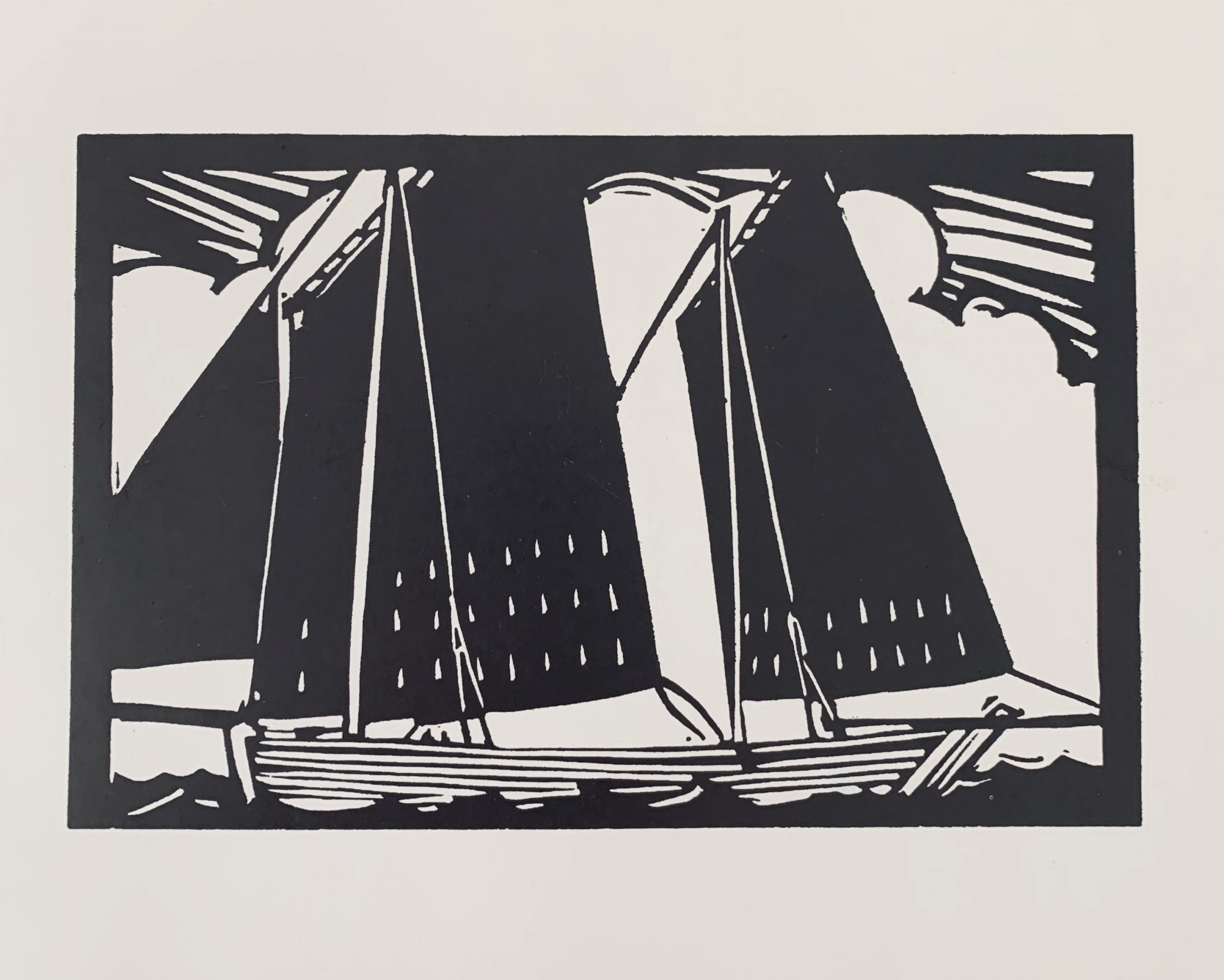 Posted at 12:52h in Invitation Cards

Llandudno: Oriel Mostyn, n.d. (1996)
15 x 21cm, 4pp. Exhibition announcement card for a Welsh solo show - the front of the card is a linocut by Jo HIncks from the artist's book/exhibition catalogue Grains of Salt. VG+. 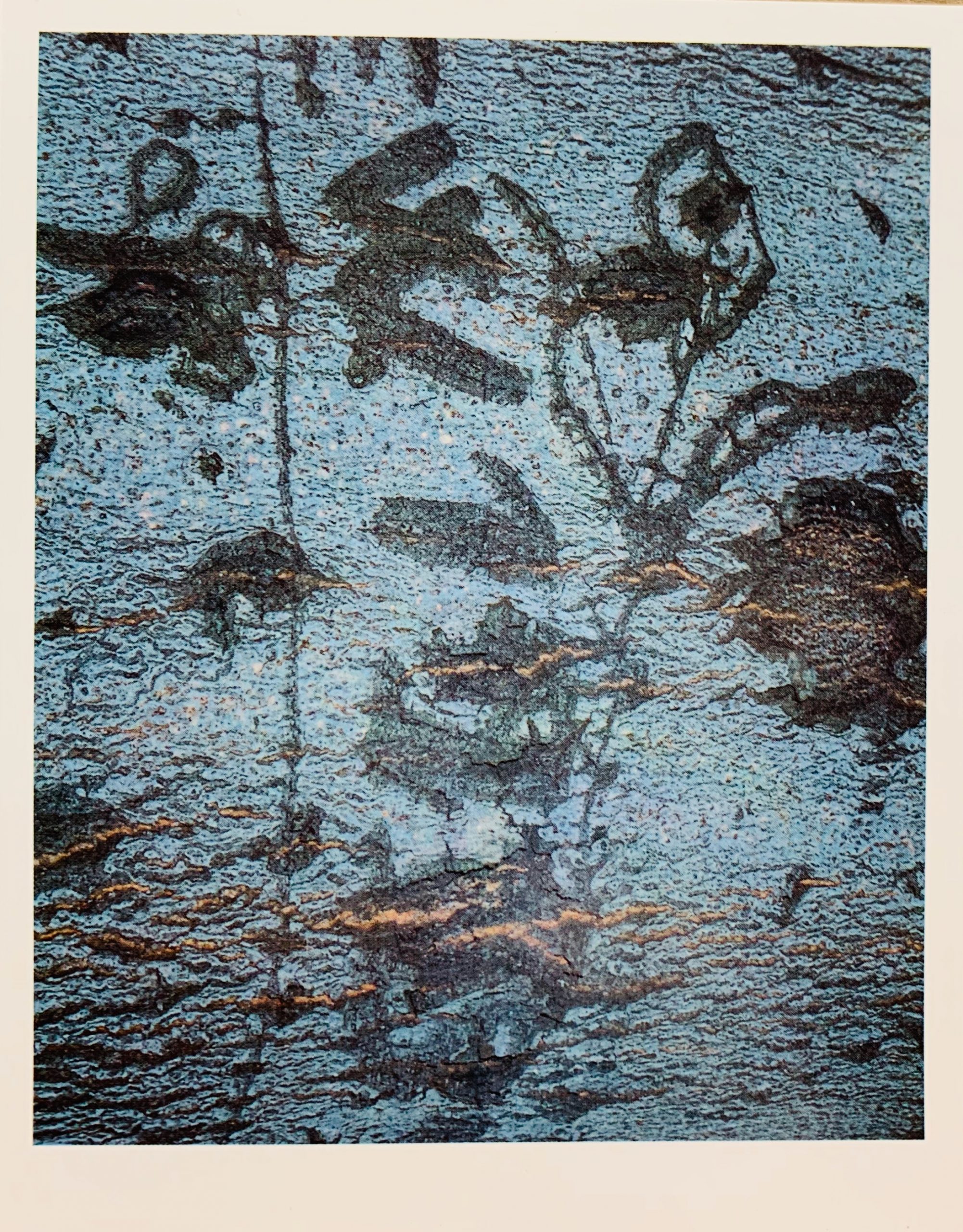 Posted at 09:55h in Artist's Postcards

Little Sparta: Wild Hawthorn Press, 1996
14.7 x 11.5cm, 2pp. A colour image by Cornelia Wieg of carved names on a tree that has been rotated by 90 degrees to make the work seem abstract and somewhat like a photograph of a flower. This is one of three times this image is used in a Finlay publication - once as an editioned print, once as a card (here) and also on an announcement card for the print. There is a longer discussion of this work on the print entry in this cataloguing. VG+.