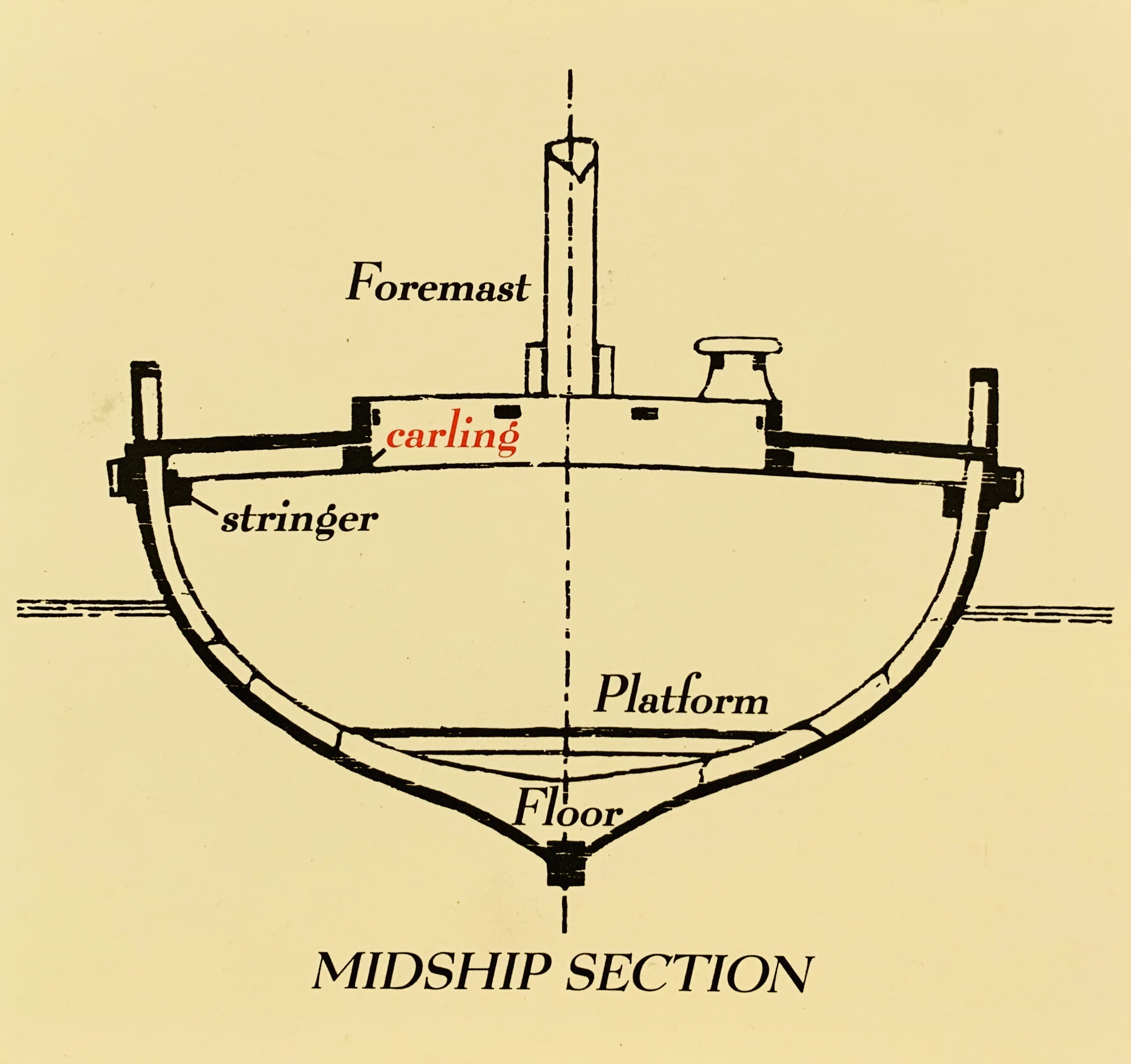 Posted at 13:05h in Artist's Postcards

Little Sparta: Wild Hawthorn Press, Christmas 1996
14 x 15.2cm, 4pp card. A drawing by Gary Hincks of a cross section of the midship area of a boat. The parts of the structure are all printed in black except one "carling" which is in red. In shipbuilding, carlings are two pieces of timber laid fore and aft under the deck of a ship, from one beam to another, directly over the keel. Carlings hold the ship together. Other meanings of carlings are less known - an old woman (perhaps a witch) and a type of pea. More than this we do not know - any information about this card would be greatfully received.
This card has a hand-written greeting from Finlay in black ink "love from Dad". VG+ 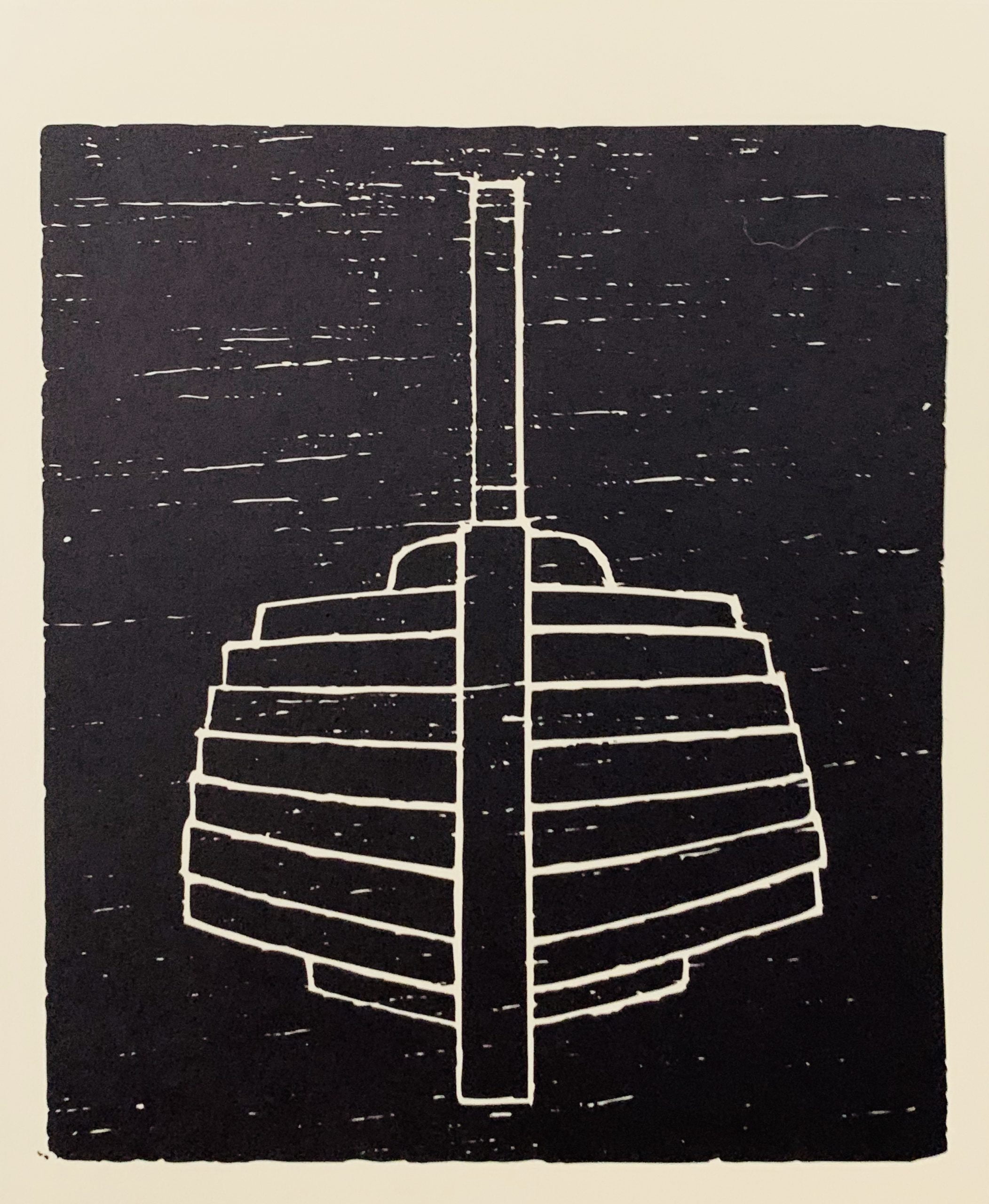 Posted at 12:39h in Artist's Postcards

Little Sparta: Wild Hawthorn Press, 1996
14 x 15.2cm, 2pp. A balsa woodcut by Gary Hincks of a "bread-and-butter hull". Such hulls are used for models and they are hulls which are carved with an open top and the deck constructed using conjoined (by glue in a model) lengths of wood such as might be found on a real ship. Finlay's love of boat models has lasted most of his adult life and one can imagine he sees the very name of such constructions to be a wonderful poetic metaphor. VG+. 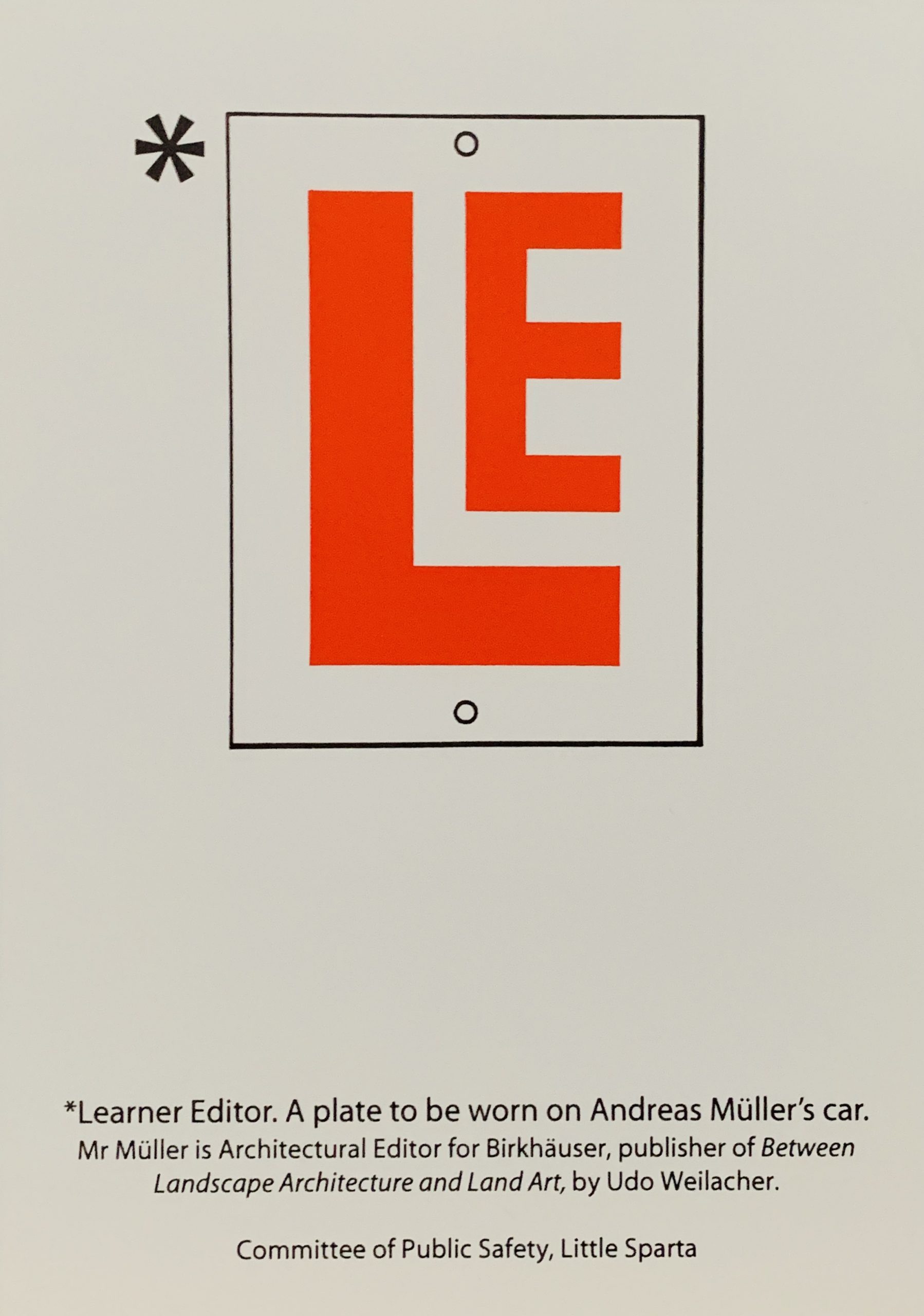 Posted at 12:35h in Artist's Postcards

Little Sparta: Wild Hawthorn Press, 1996
14.8 x 10.5cm, 1pp. A symbolic image which represents a plate to be "worn on Andreas Muller's car" to suggest that he is a "Learner Editor". Finlay was upset by an article in Between Landscape Architecture and Land art by Udo Weilacher which Muller was the Architectual Editor for. VG+.

Little Sparta: Wild Hawthorn Press, 1996
15 x 24cm, 18pp plus printed green boards. Artist's book with nine b/w photographs by Robin Gillanders of the path to Little Sparta which in turn shows the ground, the gate from a little distance and then the sign on the gate. The first sign informs the public that "Following the authority's action against the Garden Temple Little Sparta is closed to the public". The second announces that "Strathclyde Region made war on little Sparta/Strathclyde Region is no more." - an adaption of a Committee of Public Safety announcement about Lyons and the final biting sign "Closed with the support of the Scottish Arts Council" which is a parody of the usual acknowledgement statement the SAC required to gain funding.
This was Finlay's retort at the end of the "Little Sparta Wars" where Strathclyde Regional Council fought with the artist over a ratings issue of a building they claimed to be an art gallery while Finlay believed to be a Garden Temple. By closing Little Sparta and claiming the Garden Temple was reclassified as a "store" then Finlay found a way of ending the dispute allied to the fact that Strathclyde Region was abolished due to the UK Government's reorganisation. His dislike to the Scottish Arts Council remained however as he felt they had not given him any support at all in his fight and the book quotes Andrew Nairne, Visual Arts Director of the SAC as saying "Little Sparta should be sacrifices to the greater good of the arts in Scotland" which is astonishing now that Little Sparta is regarded by many as the major artistic venture in Soctland of the 2oth centrury.
Very good + condition and an interesting documentation of the end of the dispute as much as an artist's book.

Tilburg: De Pont, 1997
42 x 30cm, 16pp (self cover). Artist designed newspaper with many images of eyes in closeup. Each image seems haunting or even accusing.
Unopened in original outer wrapper Newspaper in near mint (folded) condition and bandeau with slight paper loss on unprinted right hand side. Now scarce.

Posted at 12:29h in Artist's Postcards

Little Sparta: Wild Hawthorn Press, 1996
Two cards, both 6.8 x 7.6cm, 4pp. Both cards have the same text and only differ in colour - one light blue, the other cerise. The front of the cards both have SOUTH COAST SAILS printed vertically in three columns and then in the final column the letters of SAILS become the first letters of Sunset/Amber.Indigo/Lovely/Still. South Coast Sails are a company who supply sails to the boat trade. VG+. 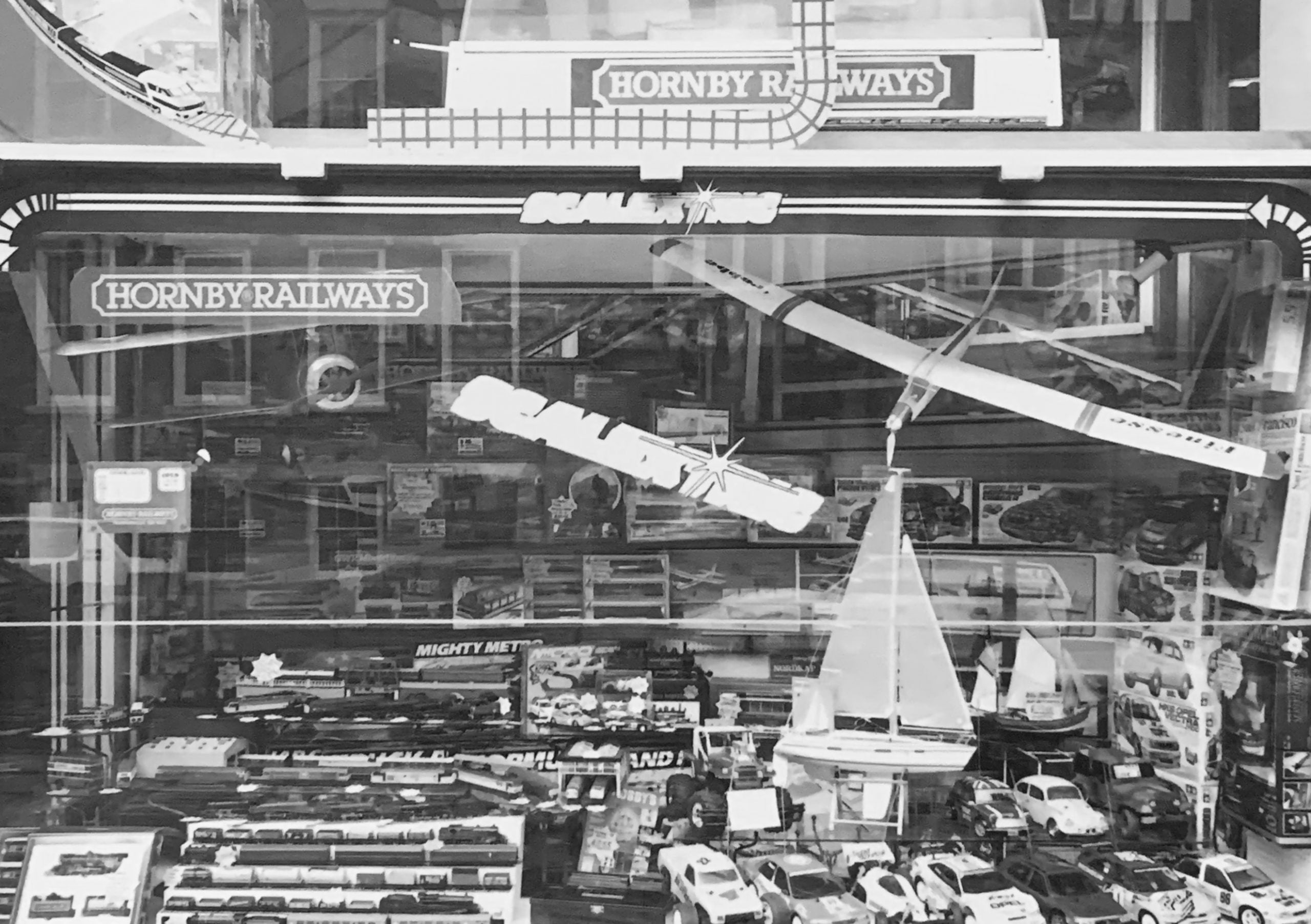 Posted at 11:14h in Artist's Postcards

Little Sparta: Wild Hawthorn Press, 1996
10 x 13.9cm, 4pp. The front of the card has a b/w image of a model shop complete with a model boat. Inside Finlay lists imaginary places:

Atlantis, Xanadu, The Heperides, Tir-na-nOg, Arcadia
\ and below notes the name of a company that specialises in model making - Gee Dees.
The models are fantasies - perfect reproductions that are not quite real but imaginary perfect versions of their inspirations. VG+.

Posted at 13:30h in Exhibition Catalogues

Peninsula and Van Abbemuseum, 1996
20.5 x 25.4cm, 80pp. Printed green cloth boards. Exhibition catalogue for a major group show of public works which includes many important artists including Robert Barry, Thomas A Claek, Hamish Fulton, Douglas Gordon, Jenny Holzer, Joseph Kosuth, Richard Long, Hans Waanders, Lawrence Weiner and others including Finlay.
Finlay's work is ICI ON DANSE - which is a neon based on the inscription found at the Bastille one year on when the site was transformed into a faux forrest and monument for a celebration. The slogan comes tfrom a translated text by Camille Desmoulins who can be credited being one of the people who initiated the attack on the prison which is usually regarded as the start of the actual French revolution. VG+. 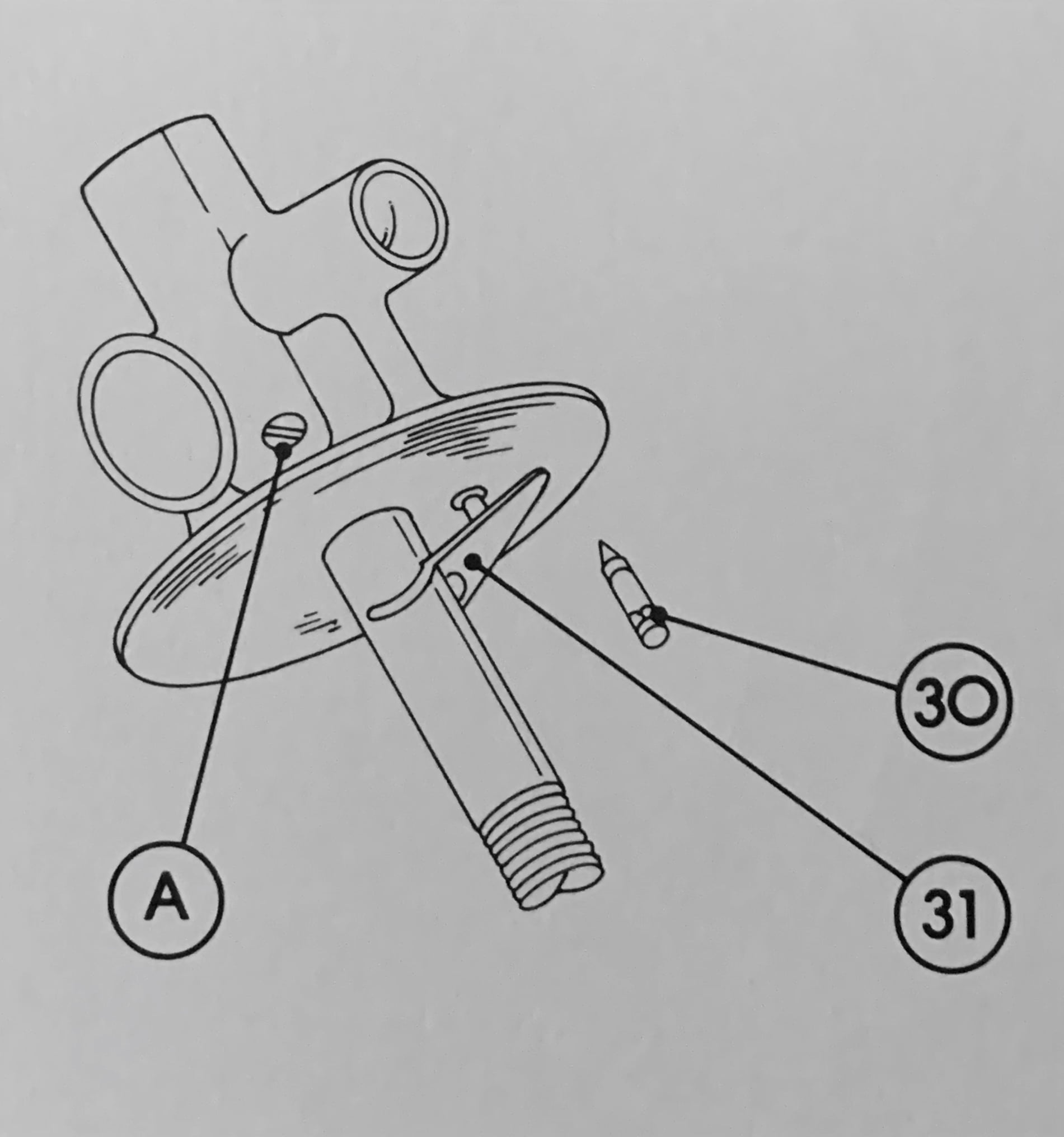 Posted at 11:19h in Artist's Postcards

Little Sparta: Wild Hawthorn Press, 1996
9.5 x 9cm, 4pp. The front of the card has a line drawing of a part of a carburettor - the mechanism that mixes the fuel and air before combustion. It is not clear if this is for a model or not (but given the artist's interest in model then it seems likely). Internally Finlay creates a poem

We suspect the metaphor here is the way seagulls open and close their beaks but in all honesty we are not sure. VG+.

Posted at 11:10h in Artist's Postcards

On the uneven road the bobbin red sail of the postvan

On the nearby bush the distant postvan's rose-

The colour is crucial here - both metaphors rely on the easily identifiable colour for a sale or a rose. VG+. 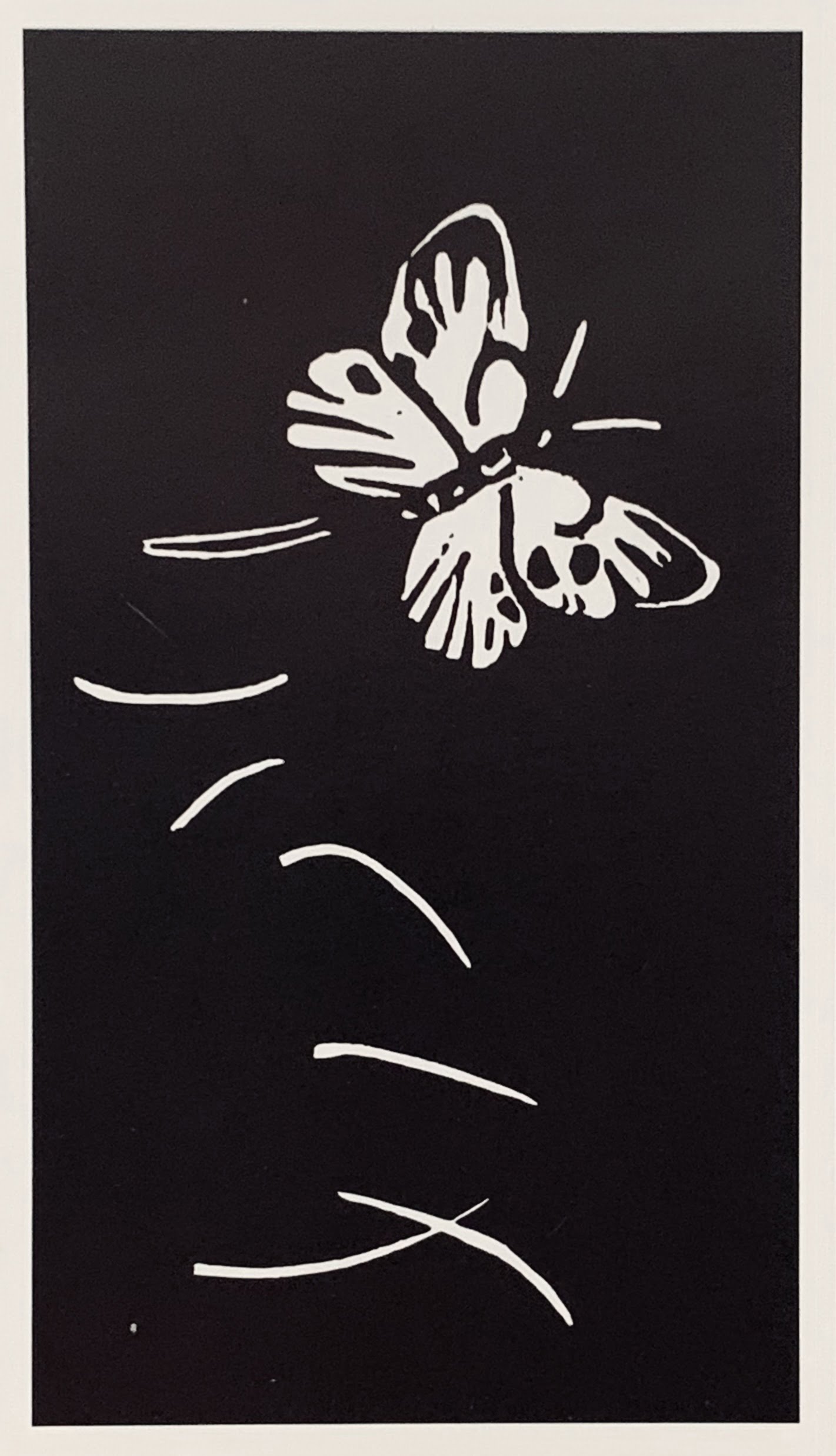 Posted at 11:05h in Artist's Postcards

The Cabbage White is probably the most commonly seen butterfly. VG+.