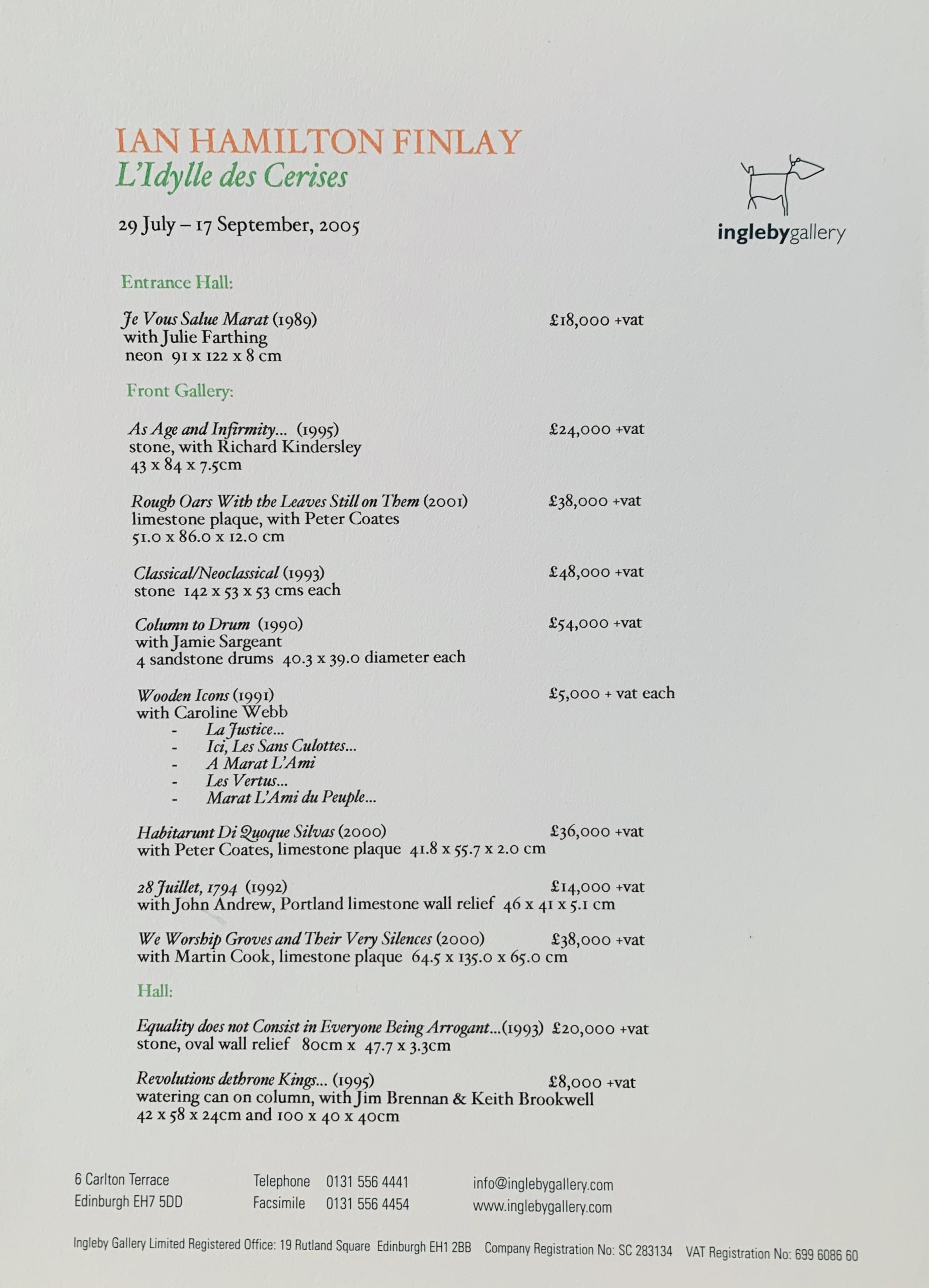 Posted at 17:43h in Miscellany

Edinburgh: Ingleby Gallery, 2016
23 x 18cm, 1pp price list for a number of sculptures and other works from the exhibition. VG+. 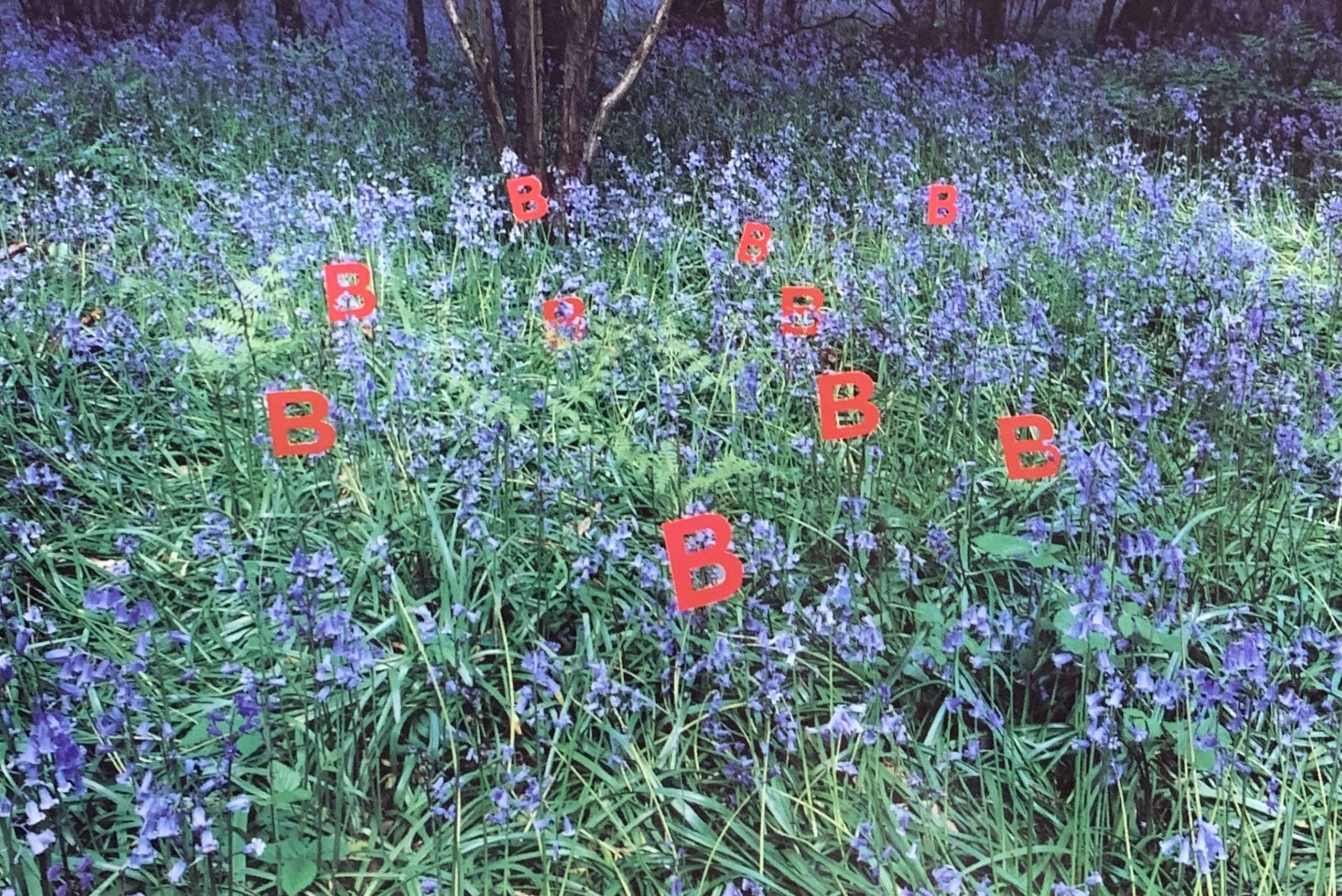 Posted at 21:09h in David Bellingham 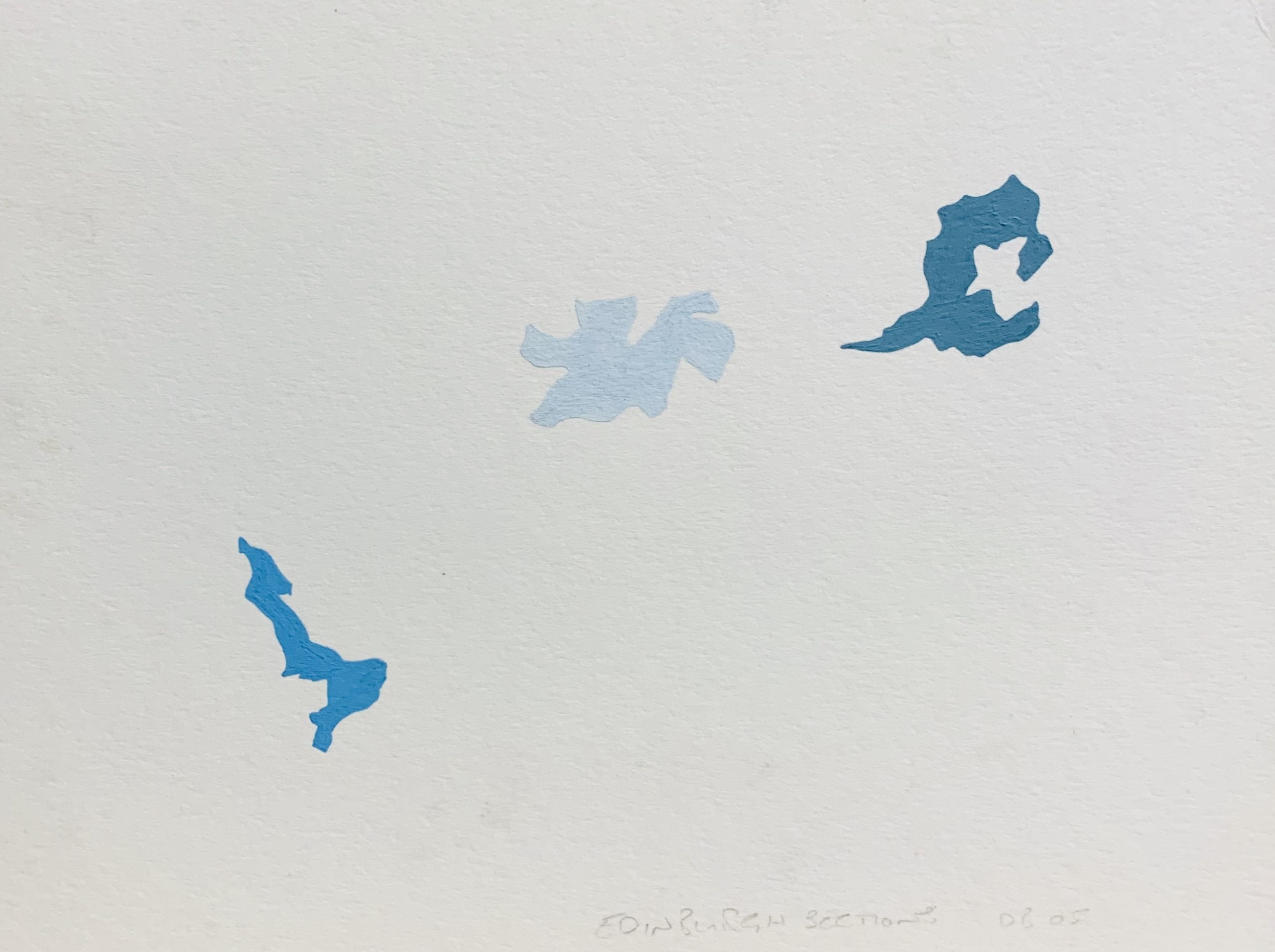 Posted at 16:36h in David Bellingham

15 x 20.5cm, acrylic paint on white board. An original painting by Bellingham in three colours of blue - the shapes being the sky seen through the gaps in the foliage of trees. On the back the work is addressed to Paul Robertson and has a stamp but it was never posted but hand delivered. VG+. Unique. ... 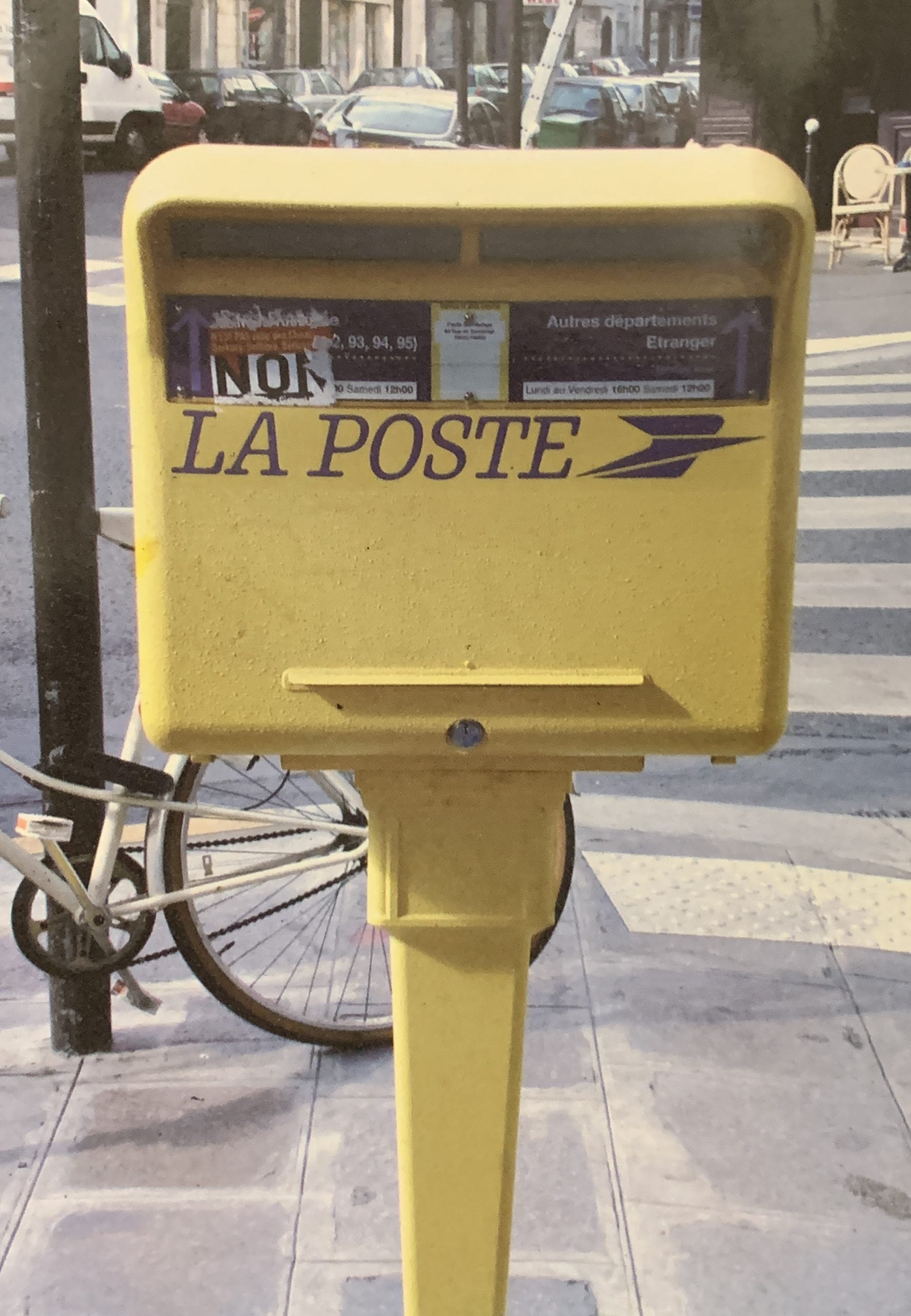 Paris: Yvon Lambert, 2005.
15 x 10cm, 2pp colour postcard with an image of a Parisian post box One of a series of similar conceptual mail art works by Monk where the card is meant to be posted from the same postbox. A mailed and signed example sent to Paul Robertson from Canada. VG+....

Bremen: Künstlerhaus Bremen, 2005
20.3 x 20.3 x 14cm, two part white box content of an artist's book and an unique glazed coffee mug with a text on the outside - deliberately printed upside down.
The book - OCEAN WAVE - is 21 x 15cm, 244pp plus card covers but the cover has been torn off by the artist and replaced inside the book. The book is a physical reminder of Bas Jan Ader's suicidal trip in trying to sail back to Europe single handedly from America as well as films made by Monk where he tried to make beer commercials. The book is entirely designed by the artist and has overlapping images from the films as well as blank pages.
The mug has a quotation from a short story about a true life event by Lawrence Elliot called "The Boy Who Plunged Over Niagara": "Deanne, awed by the tumultuous river, which she had seen only once, was reluctant. But with little Roger jumping with glee, and her mother urging her to go along --- "You'll have a chance for a swim at Lynch's later --- Deanne changed into a bathing suit, and the three set out." and is unique to this mug. Other mugs had different quotations from the story on them. It is signed by Monk and dated 2005 on the bottom.
The book and the quotation both deal in part with drowning (although the boy and his sister survived the capsize the adult with them did not. And the quotation being upside down means that to read it the mug has to be capsized in some sense also. One presumes Ader drowned after a capsize in the Atlantic as well.
This is unique in the series (although the book was released as a separate edition at the exhibition in Bremen. The top of the box is signed and numbered by Monk also. Sadly because of contamination from another Monk work (A box of cheese) with which it was stored temporarily the box has heavy foxing on all sides. But this does not affect the mug or the book. 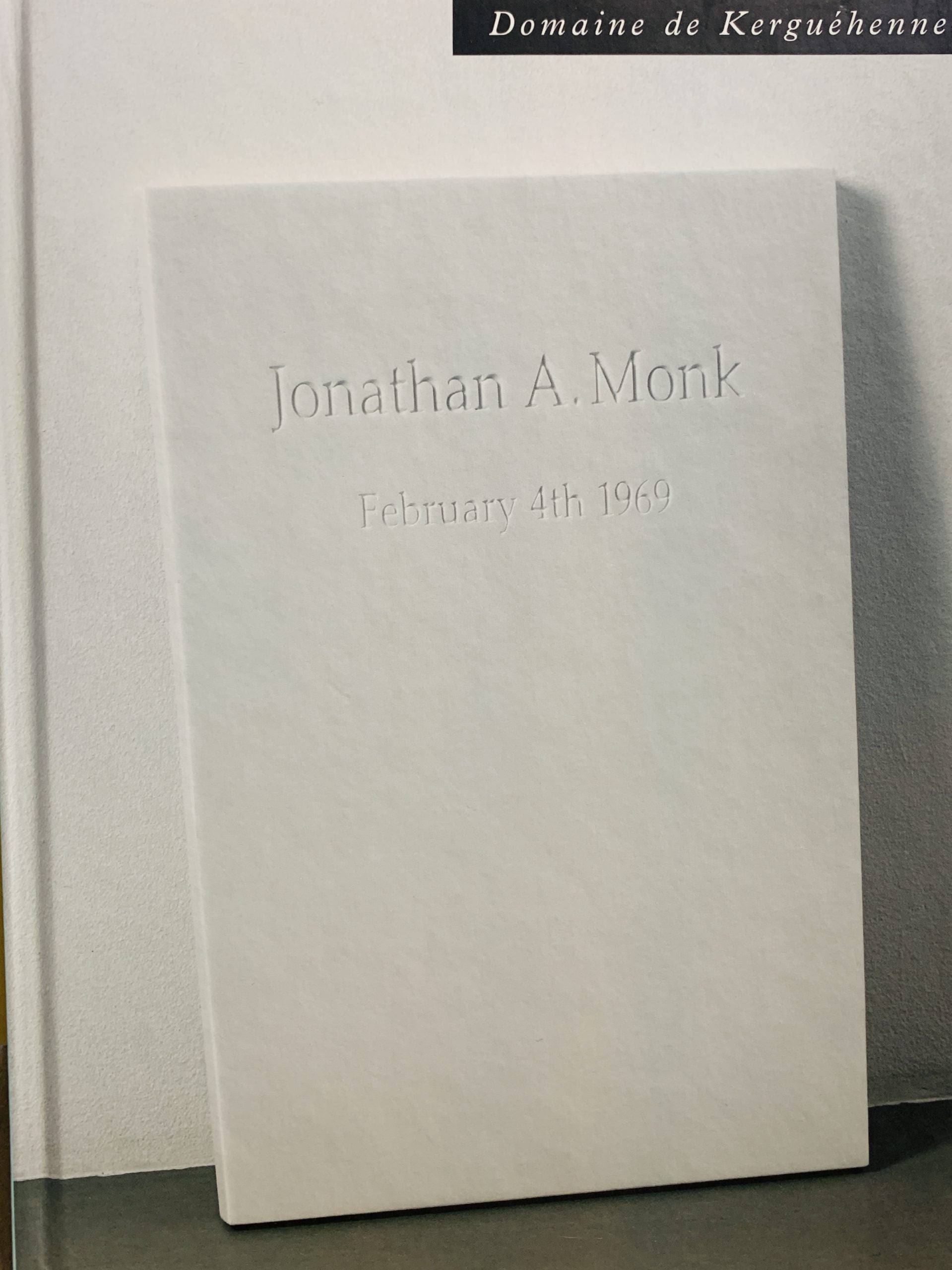 Bignam: Domaine de Kerguéhennec, 2005
24 x 18.4cm, 206pp plys endpapers and boards. Exhibition catalogue for the solo exhibition "Family of Man" which has essays and texts by Claude Closky, David Shrigley, Pierre Bismuth, Ceal Floer, Edward Rusha and Jon Baldessari. Illustrated in colour throughout with works by Monk. This example is signed on the first blank endpaper by Monk in pencil. VG+.