Hannover: Kunstverein, 2006
26.5 x 22cm, 154pp. Boards with a design by Monk. Exhibition catalogue which is also in part a catalogue raisonne of original and multiple works. Colour illustrations throughout. Designed by Monk. This copy is unusually signed on the back cover of the hardback binding in felt tip pen within the drawing of Monk's hand. Fine.
... 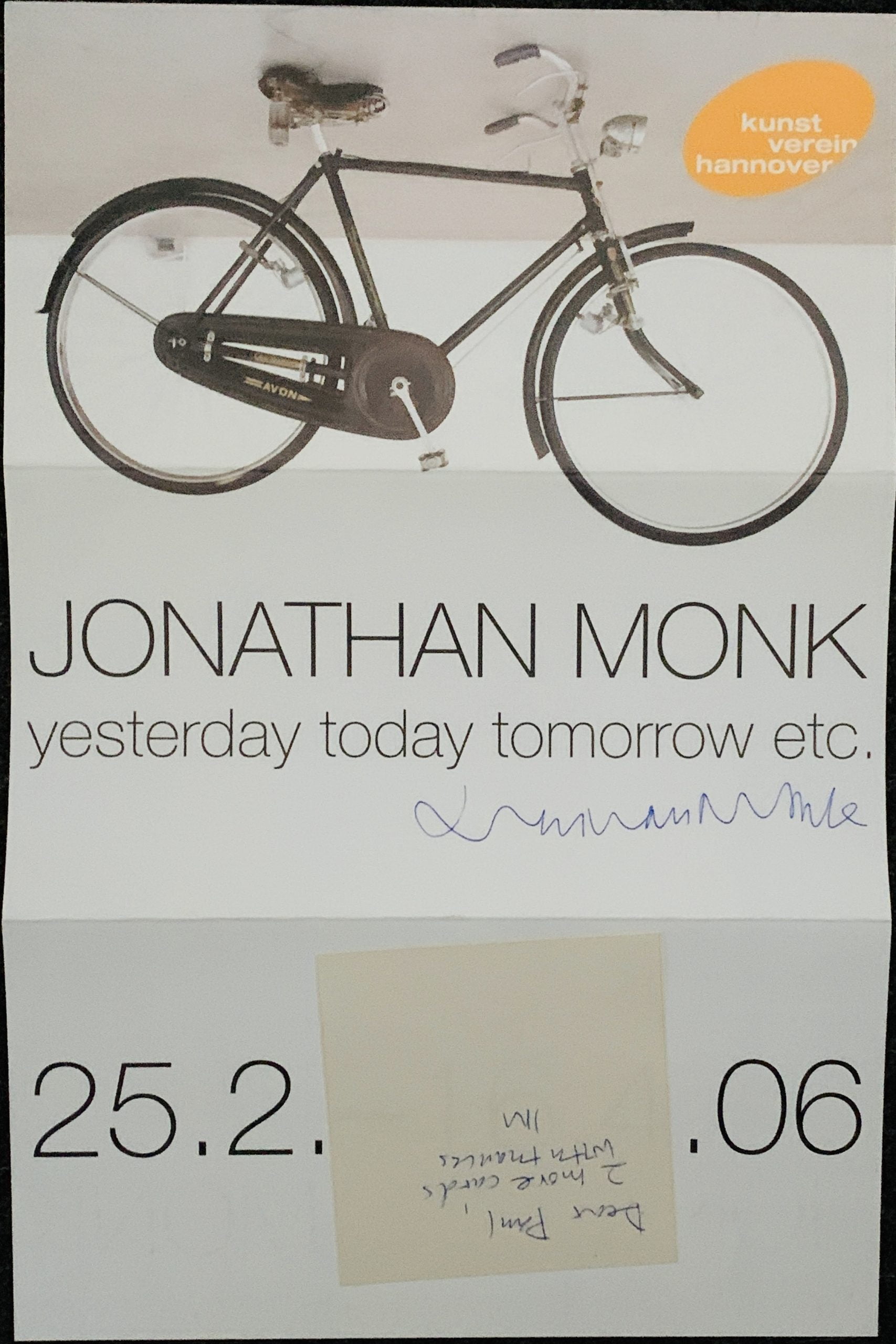 Hannover: Kunst Verein Hannover, 2006
10 x 21cm, 6pp. Announcement card for a solo show with one work (an upside down bicycle) illustrated plus gallery texts. This example is signed by Monk and additionally has a white post-it note added "Dear Paul 2 more cards with thanks JM" (a reference to Postcards Posted from Post Box Pictures which Monk had asked Paul Robertson to post from the box on Edinburgh's Royal Mile. VG+.
JOINT:
Hand addressed by Monk postal envelope.

Posted at 13:27h in David Bellingham

Metal box, hand drawn sheets of paper with 1,916,594 individually drawn crosses. Some pages framed in glass and wood.
Turnout is a 1:1 representation of the voting public of Scotland. It is a monument to those who voted in the first national election following the establishment of the Scottish Parliament in 1999. The work takes the Scottish Parliamentary election of the 1st May 2003 as a model. 1,916,594 votes were cast in this election, amounting to 49.42% of the electorate.
Turnout consists of 1 916 594 individually drawn crosses, one cross for every person who voted. Groups of 1000 crosses were drawn on 1917 separate sheets of paper, the final sheet consisting of 594 crosses. The sheets of paper are housed in archival boxes which in turn are housed in an outer ‘ballot box'. The first 20 000 and last 20 000 crosses are framed. Outer box dimensions: 49cm x 37cmx 66cm
Where the traditional monument takes a partial list of proper names and sets them in stone, in Turnout voters are memorialised not in name but in action. Turnout was made at the Heart Gallery in Edinburgh between February and April 2006. Images on request.
NB - Please note Turnout is available for exhibition - do enquire.

Rosebery: Stahlemuhle, 2006
30 x 10 x 8cm, two part thick cardboard display box with label content of a 0.51L bottle of clear bottle of schnapps with printed label and straw.
The bottle label denotes the liquor as "Merry Monk" and has the date February 4th 1969 and REST IN PEACE on it - the whole being a remembrance of the artist's father who died while Monk was a young man. His father seemingly liked a drink - hence the Merry Monk of the name.
This is one of only 66 such bottles produced and signed with Monk's signature "Until then/Jonathan Monk" on the bottle label and numbered.
VG condition although there is very slight staining to the label and the box and the cheap box staples are somewhat rusted over time - but a scarce object multiple. 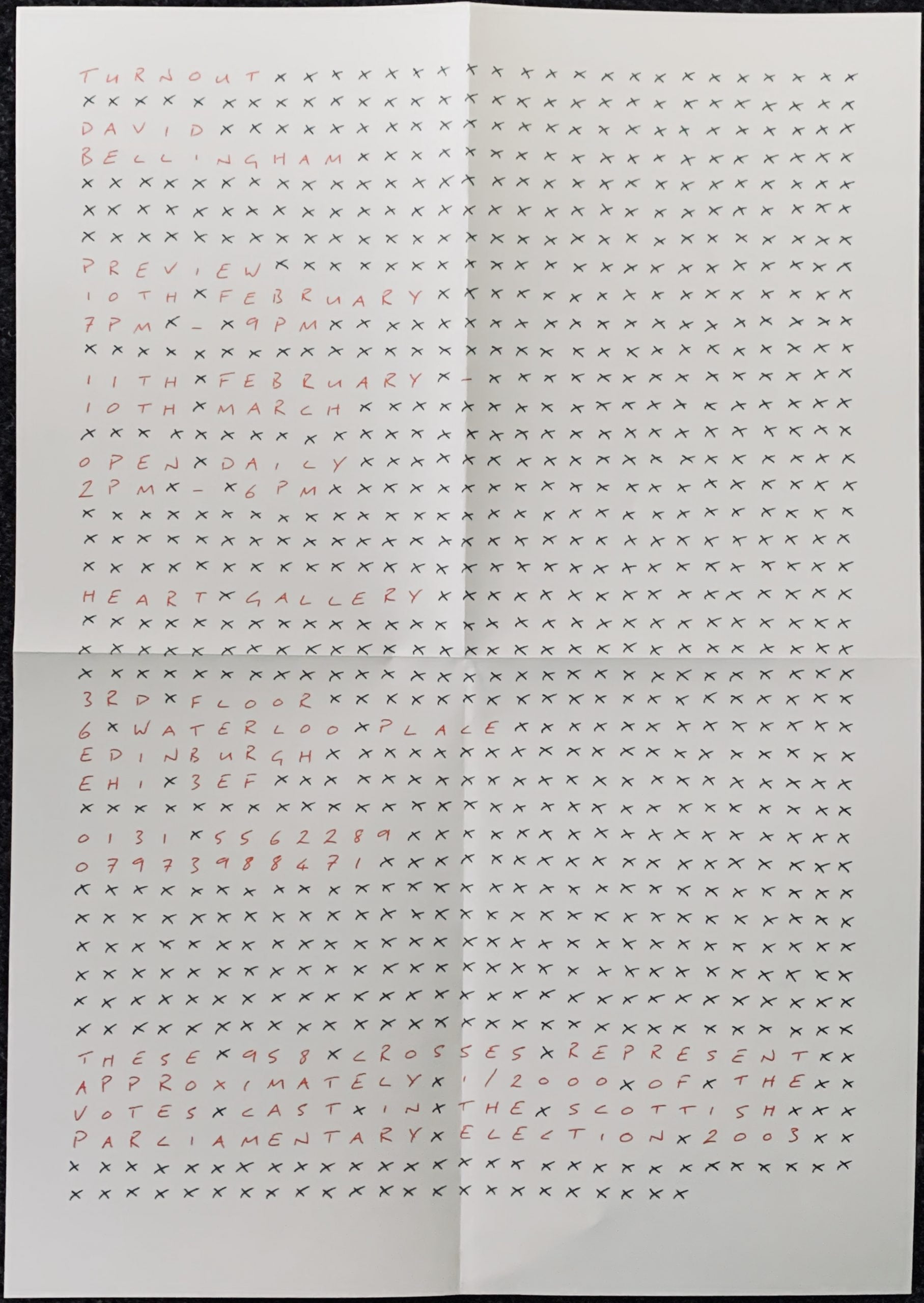 Posted at 13:16h in David Bellingham

Edinburgh: Show & Tell Editions, 2006 42 x 29.7cm, red and black on white offset lithograph - exhibition poster for Bellingham's Turnout project which took place in Heart Gallery over several weeks where the artist recreated the first Scottish direct elections in 300 years by rewriting by hand the 1,916,594 crosses that comprised the voting in those elections. Design by Bellingham - this is one of the 100 unsigned posters designed by Belling to promote the exhibition. Fine. 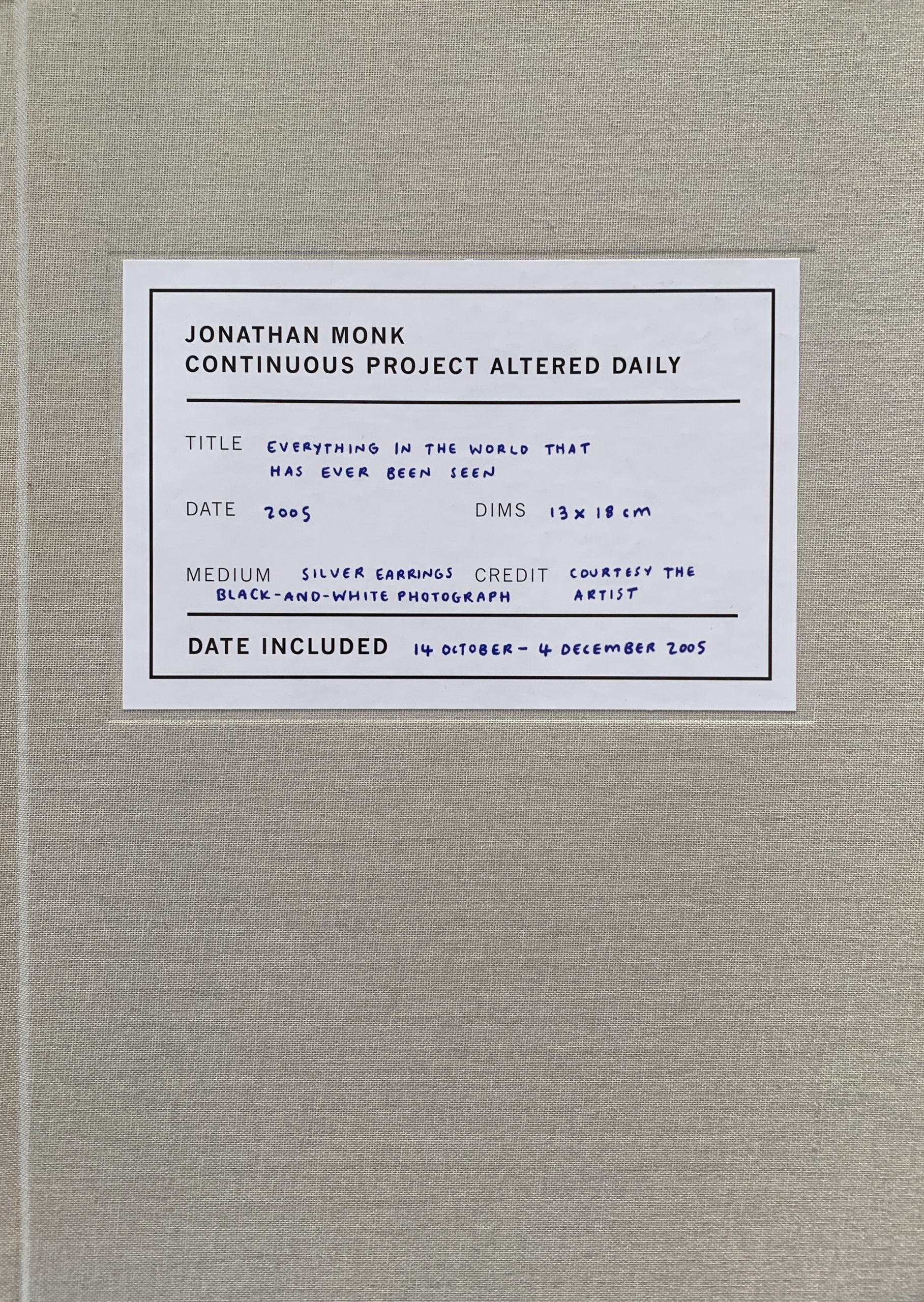 London/Frankfurt: Institute of Contemporary Arts/ Revolver, 2005
23.5 x 17cm, 166pp plus boards. Exhibition catalogue for Monk's long running exhibition in the ICA where every day the works on display were changed. The book has a complete list of all the works in the show (but not necessarily always on display) - the daily additions to the work are illustrated in b/w and other works in colour. VG+. This book is signed in pencil by Monk on the title page.