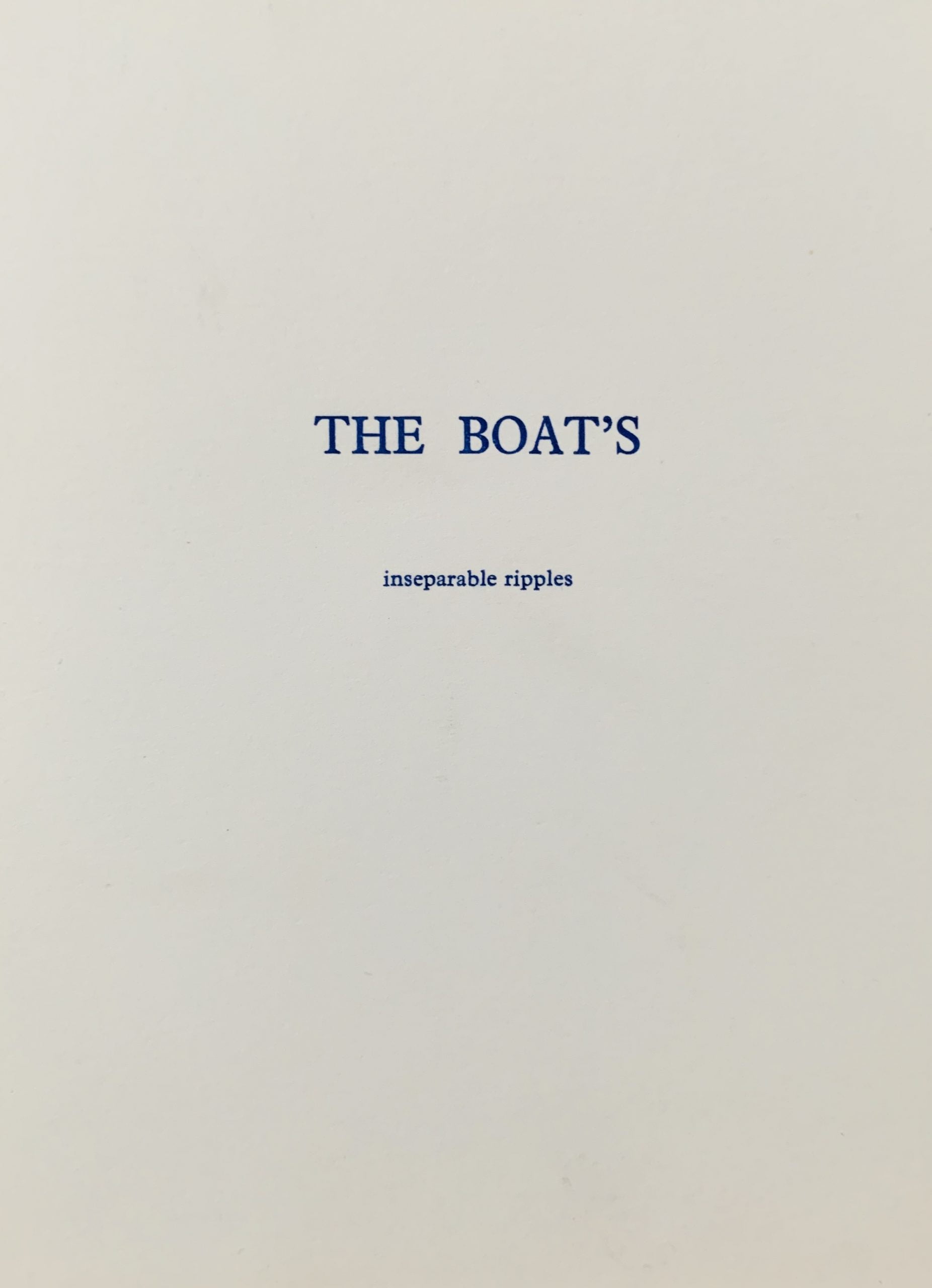 Posted at 12:33h in Artist's Postcards

The poem was one of the first two-word poems first considered in 1967 but this is almost certainly a posthumous reprint of the work but we do not know exactly the date. It was perhaps printed for a posthumous exhibition of Finlay's work. Until we identify it we will place it as an artist's postcard work.VG+. 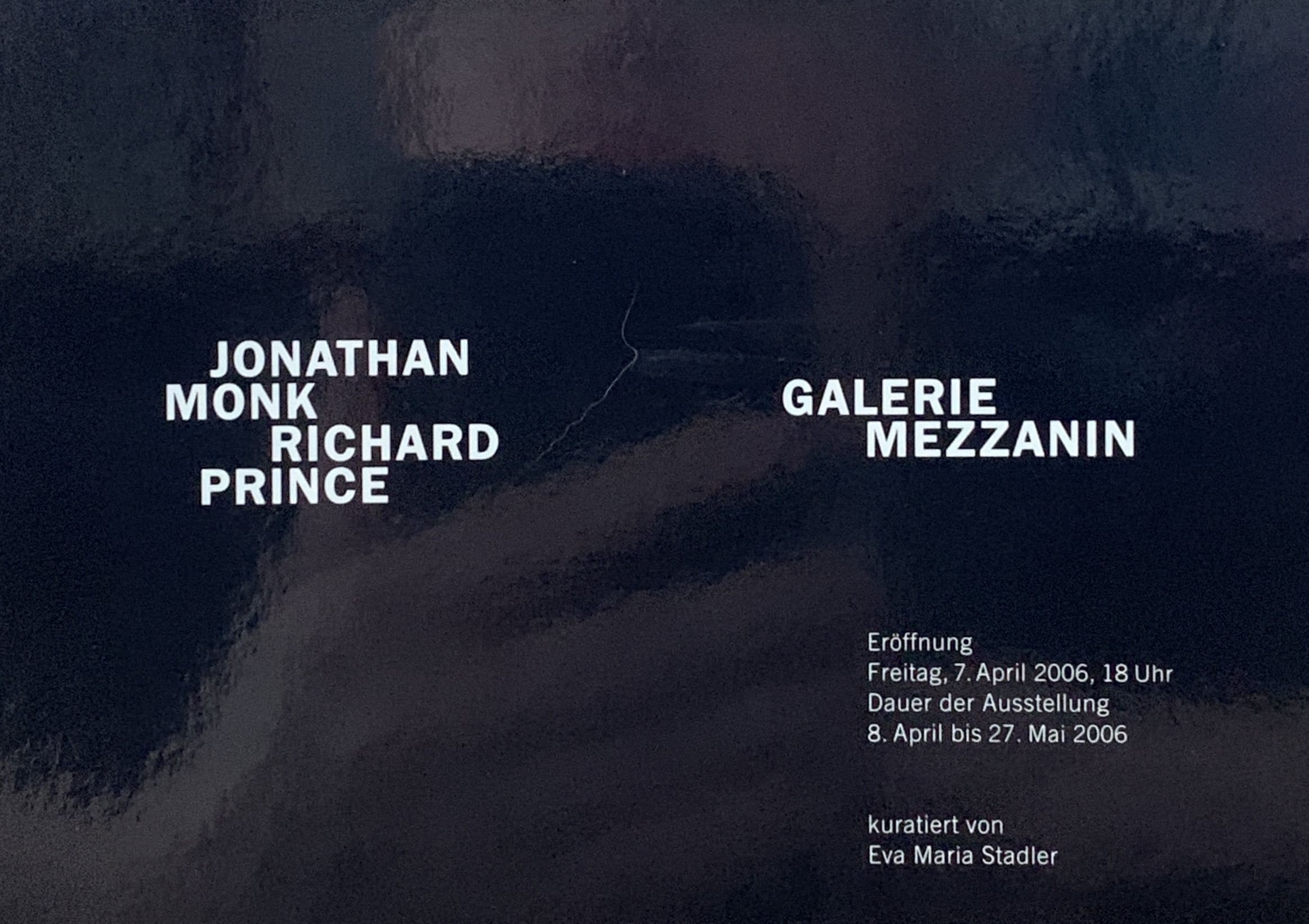 Posted at 09:58h in David Bellingham

Glasgow: Wax366, 2006
8 x19cm, 2pp artist's postcard with the alphabet printed white on green but with the letters of Ian Hamilton Finlay removed from the list - issued soon after Finlay's death. VG+. 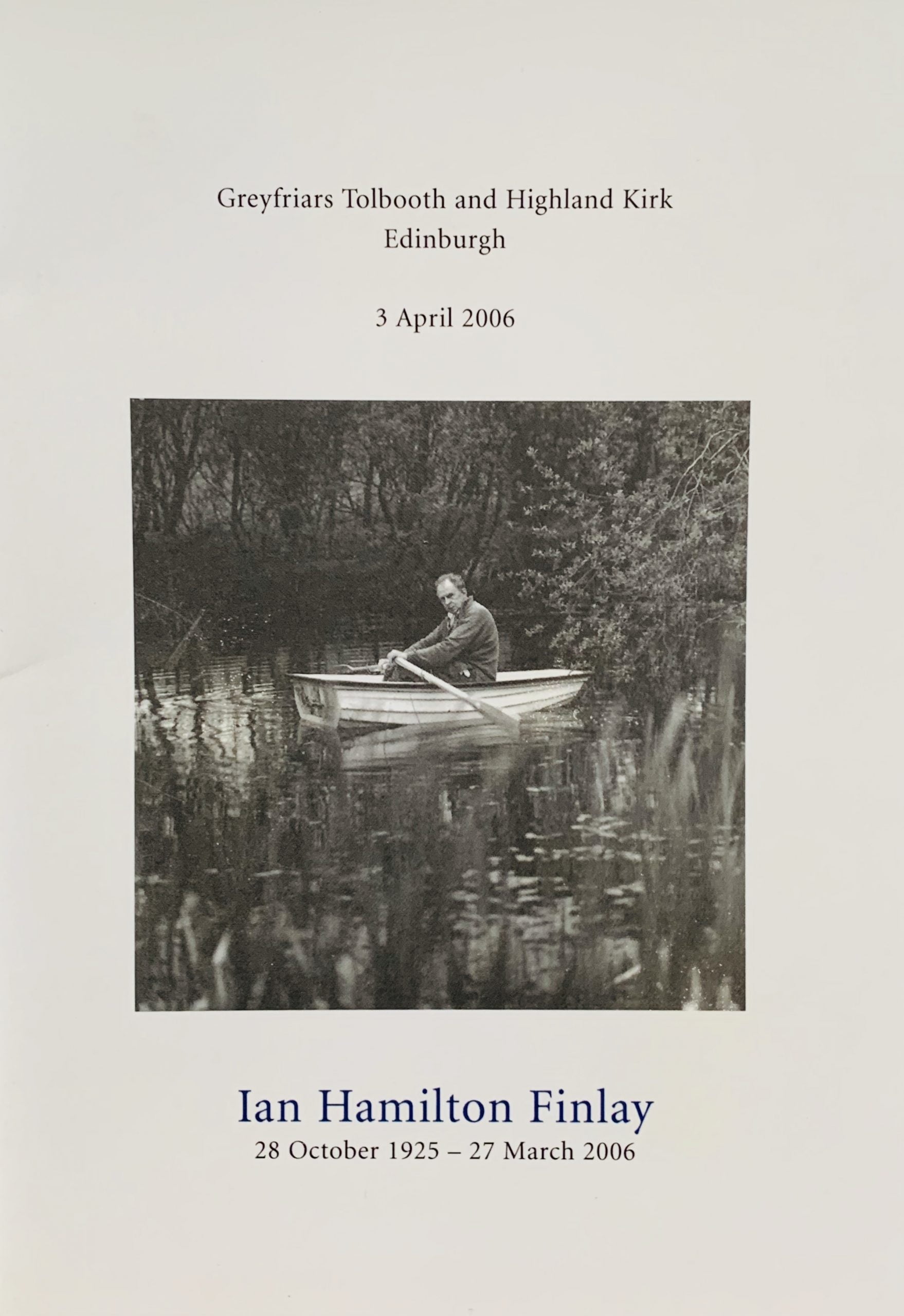 Posted at 17:09h in Miscellany

Edinburgh: Wild Hawthorn Press, 2006
21 x 15cm, 4pp plus cared covers. Order of service for the Memorial Service held in Greyfriars Tolbooth and Highland Kirk on 3 April 2006. Attending I was surprised it was so religious in content as I had not perceived that Finlay was particularly Christian even if he sometimes used the bible as source material. The alter was laid out with many of his toy yachts, Alec Finlay, Ian's son, gave a moving Eulogy where I remember him saying fittingly that all disputes with his dad and others were now over. Some poems of Finlay were read and Stephan Bann gave a short appreciation. It was a sad affair, of course, as all such events are. VG+ 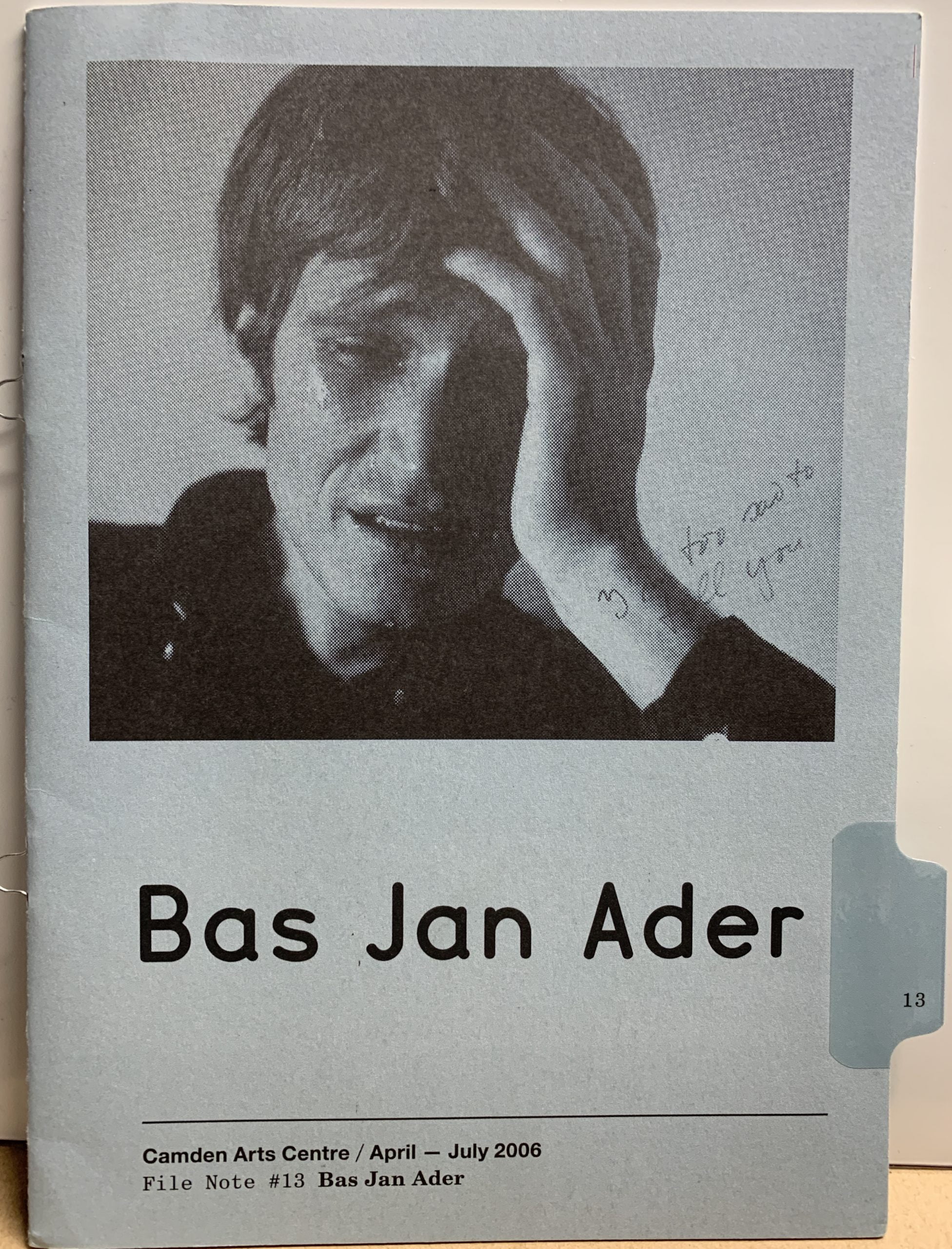 London: Camden Arts Center, 2006
21 x 15cm, 8pp plus card covers (which have tabs and metal hinges for storage). Exhibition catalogue for a retrospective exhibition of the work of the Dutch conceptual artist. There are 6 works reproduced in b/w and colour.
The catalogue has a text written by Jonathan Monk as foreword about Ader.
The catalogue is signed in pencil by Monk on the inside first page. VG+. 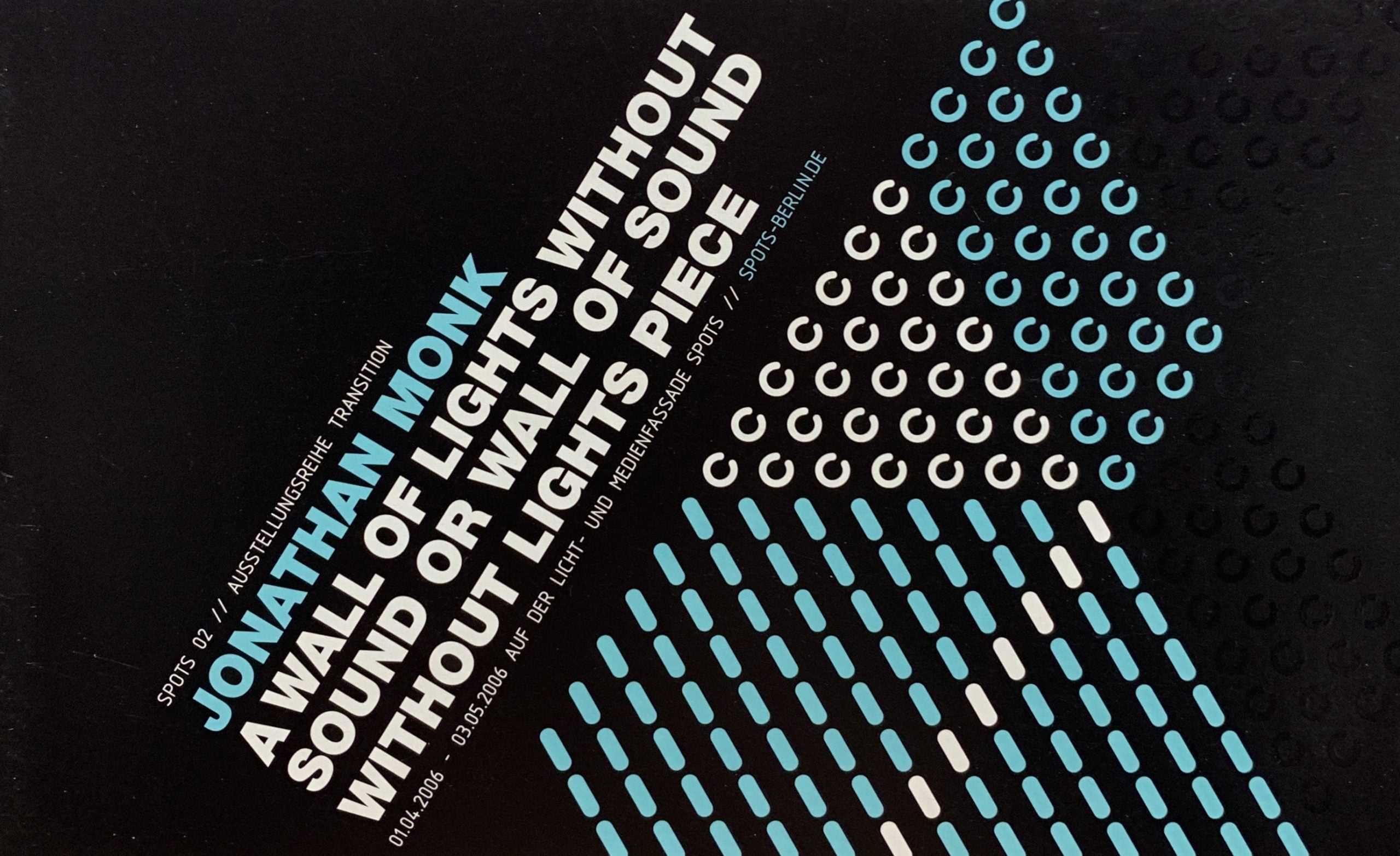 01 Apr A WALL OF LIGHTS WITHOUT SOUND OR WALL OF SOUND WITHOUT LIGHTS PIECE. 2006.

Berlin: Herausgeber, 2006
11 x 18cm, 16pp (self cover). Installation catalogue for a major public work by Monk where he used the major electronic advertising screens at Potsdamer Platz in berlin - the images being of Freddy Mercury - and the sound being Bohemian Rhapsody. There are b/w images of the work and one colour portrait of Monk. Text in German.
The last page of the brochure has a slight closed tear else VG.