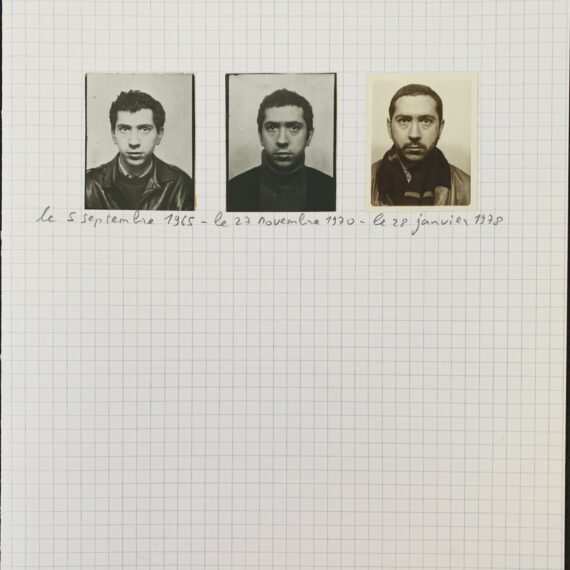 Karlsruhe : Badischer Kunstverein, 1978
26 x 22 x 2cm, two part black conservation box content of a 24 x 19.5cm, 124pp plus boards and dust jacket. The deluxe version of the exhibition catalogue for a solo show of mostly photography. Texts in German by Andreas Franzke and Michael Schwartz. Later sections include re-printings of various of the artist's previous exhibition works and images from artist's books including Reconstitutions de Gestes Effectues par Christian Boltanski, L'album Photographes de la familie D., Les Habits de Francoise C., Les 62 Membres du Club Mickey en 1955,the Inventaire des objets appartenant a un jeune homme d'Oxford, Descriptions des 20 Regles et techniques utilisee en 1972 par un enfant de 9 ans, Les Images Modeles, Les compositions fleuries, and Les Compositions Photographiques and other images of the artist's "comic" performances of the 70s.
This deluxe copy of the book comes with two original editioned photographs by Boltanski - the first three original passport style b/w photographs of the artist taken on the dates - 5 September 1965 (the day before the artist's birthday), 27 November 1970 and 28 January 1978. The dates are written in the artist's hand on the gridded 24.5 x 20.5cm, 4pp card under the tipped on images.
Inside the card is a second photographic print - here in colour - of a set of children's plastic toys that resemble worker's tools. The card is signed and numbered on the back of the card as "VI" in pencil by Boltanski with a rubber stamp impression. The last page of the hardback catalogue is also signed and numbered "VI" in pencil by the artist. There were only 20 such deluxe copies issued during the exhibition. ALl are VG+ in like box. Reference: Flay Boltanski Catalogue Page 146. 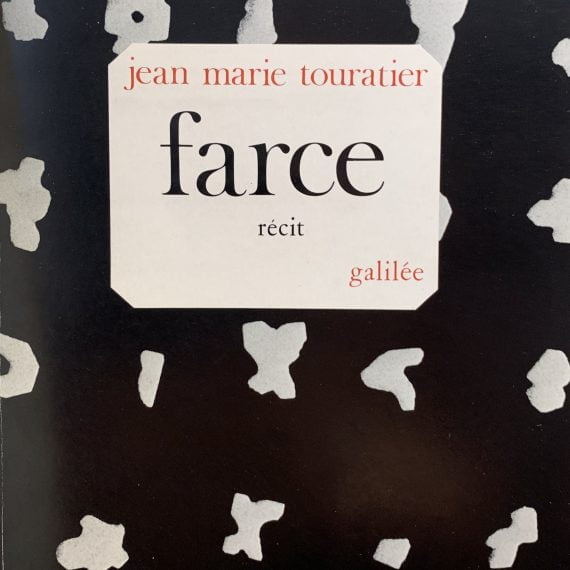 FARCE. 1979. ONE OF 50 DELUXE COPIES WITH HANDMADE INSERTED CAGE AND SUGAR CUBE.

Paris: Galilee, 1979
188 x 130 mm, unpaginated. Original wrappers with artist designed dust jacket. Artist’s book created from the novel by Touratier which Boltanski designed the dustjacket for - with images of shaped sugar cubes (which are to be found in the text). This is one of only 50 special editions in which Boltanski cut a hole in the middle of the book, glued a shaped sugar cube and then places a wire cage around the object. The colophon is signed and numbered in inky by the artist. A very rare artist book by Boltanski and surprisingly not found in any catalogue raisonne. VG+ condition. 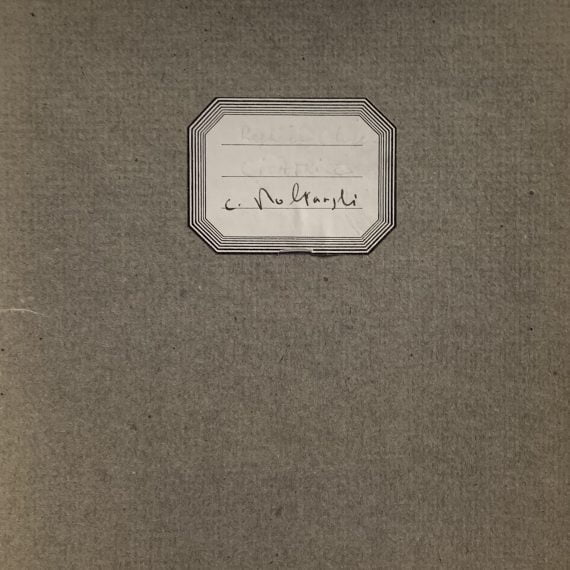 CICATRICES. 1990. ONE OF 37 DELUXE COPIES WITH “CINQ PHOTOGRAPHIES DE L’ALBUM DE LA FAMILLE D.”, AN ORIGINAL SIGNED & NUMBERED PHOTOGRAPH BY BOLTANSKI & AN ORIGINAL HANDWRITTEN DOCUMENT BY CLUZEL. ONE OF ONLY 37 SUCH COPIES.

Paris: Librairie Seguier, 1990
32 x 26cm, two part blue card box with handwritten title label content of a 30 x 21.5cm, 104pp plus blue card boards book with, again, an handwritten label. The book has been described as poetry in some online descriptions (presumably because of the poet's earlier works) but it is really a work in prose of reminiscences from the author's childhood - a subject matter which reflects much of Boltanski's interests in recovered memory.
This being the deluxe edition there is a further artist's book "Cinq Photographies de l'album de la famille D. " which is 8 x 11.5cm, and contains 6 appropriated photographs (taken from originals) mounted as if in a small photo-album. This book was only available in these deluxe copies making it one of the rarest of Boltanski productions.
There is also an untitled 24 x 18cm, b/w photograph of a young boy with his toy wooden horse standing outside of a house. The photograph is also mounted in a folder with tissue guard.
Finally there are four hand-written original manuscripts of texts from the book by Cluzel, and a colophon sheet which is also hand annotated by the poet and numbered from the edition of only 37 (this example is number 23). These pages are in a plastic transparent folder
Rare and important not least because of the inclusion of the small artist's book, this example is in VG++ condition although the front cover label has lost some of the ink from the title and Cluzel's signature - however, Boltanski's signature on the label is still very clear and dark. 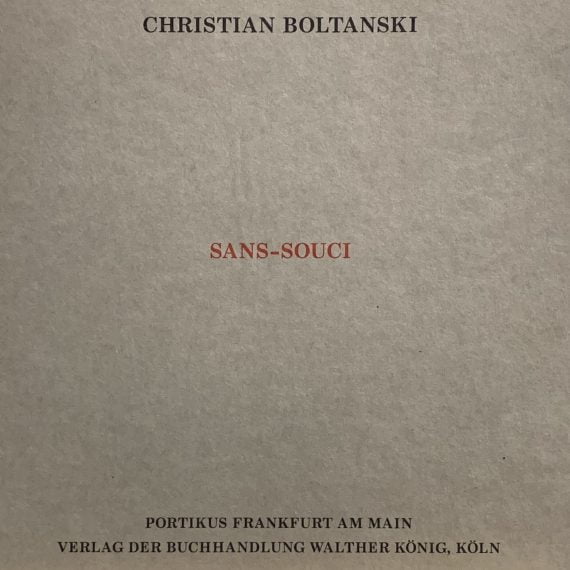 SANS-SOUCI. 1991. ONE OF 30 DELUXE SIGNED & NUMBERED COPIES WITH LAID IN ORIGINAL PHOTOGRAPH.

Frankfurt am Main/Koln: Portikus/Walther König, Köln, 1991. 22 x 29cm, 16pp, plus printed typographic boards. Artist's book with 56 b/w illustrations of German family life just before or at the beginning of the second world war with many of the subjects in military uniform. Each page has a tissue guard which has a patter of a cobweb on it. The book looks like a family album and the subjects are happy in their life - one cannot tell anything about their personal guilt or actions or morality during the war from the photographs.
This is one of only 30 copies that has an additional original 18.7 x 22.4cm, b/w photograph on the first sheet in photo-corners of a wedding with two men in uniform with the bridge and her friend. The extra page is signed and numbed by Boltanski on the inside cover of the book. VG+. Very scarce. 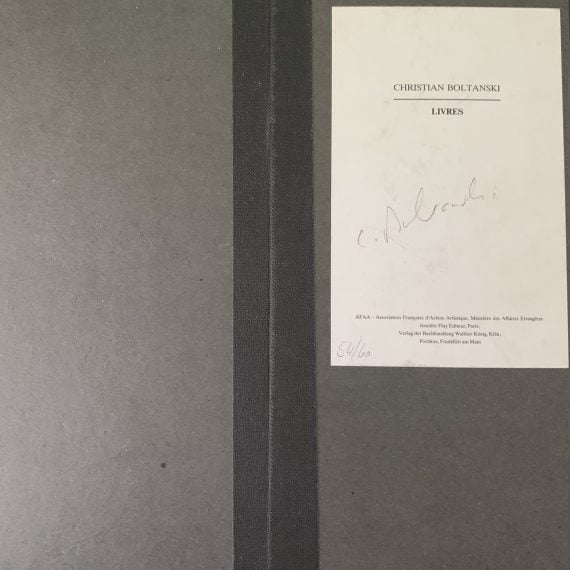 LIVRES. 1991. ONE OF 50 DELUXE COPIES WITH ORIGINAL SIGNED & NUMBERED PHOTOGRAPH.

The re-printings make sense as part of Boltanski's reconstitution of his past - there is no reason why he should not make the rare books easier to find given the rarity of some of them (and the high prices) but book dealers curse this publication as sometimes these reprints are offered as first editions and it is hard to tell the difference.
This is one of 50 signed and numbered deluxe copies (on the front label) which has additional to all of the above an original photograph of Boltanski as a comic from the Saynetes Comiques series which is signed and numbered in white on the front and is presented in a card folder with tissue guard. These deluxe copies are very hard to find. 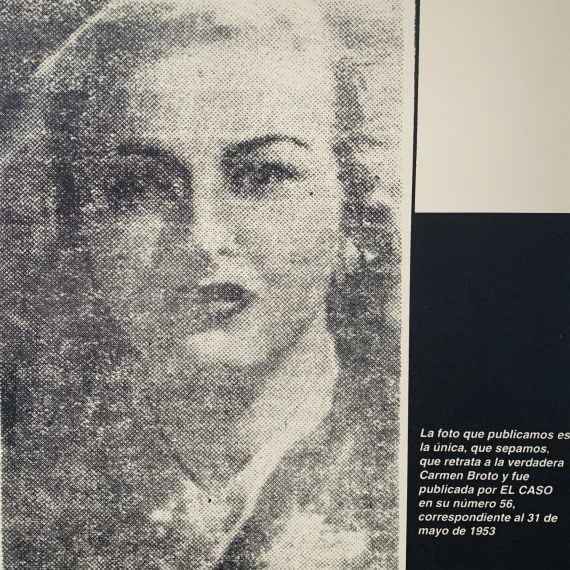 Paris, Jean Daviot et Bernard Marcadé, automne 1991, 35 x 30 cm (opens out to 70 x 60cm), 2pp. A single number of this artist's publications which is dedicated to a single artist - here, obviously, Boltanski who reproduces two pages from the Spanish "detective" magazine "El Caso Criminal".
This is one of 200 signed and numbered examples aside from the larger run of the magazine. Folded as issued else VG+. 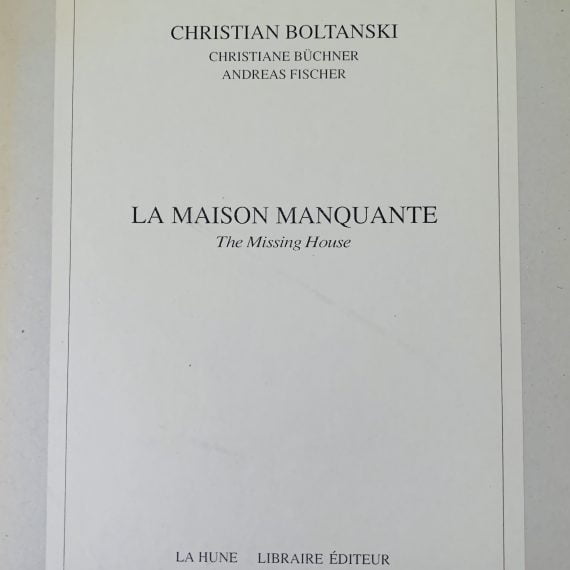 Paris: La Hune, November 1992
33.5 x 24 x 5.5cm, one part archival box with pasted on title label, content of eight folders containing original & reproduced photographs, maps, sketches, photographs, transcripts, and documents relating to the occupants of a destroyed house (bombed by the Allies on 3 February 1945 which killed most of the residents).
For an exhibition in Berlin entitled "Die Endlichkeit der Freiheit", Boltanski initially placed "a series of 12 black and white plaques each mounted on the facing walls, storey by storey, indicating the family name, profession, and period of residency of each tenant who had lived in the bombed out apartments."
At the same time in East Berlin, Boltanski exhibited a series of vitrines with archival documentation of the various families and the building (the research here should be credited to art student, Christiane Büchner and Andreas Fischer). Interestingly during the research Boltanski and his assistants discovered that prior to 1942, many of this obliterated building's inhabitants had been Jews, until they were evicted, and deported to concentration camps.
The folders have around 150 photographs, photocopies, offset and stencil reproductions, postcards, maps, and other facsimile items - the eight folders are:

This is one of the most difficult to find of later artist's books by Boltanski and certainly one of his most complex productions, the level of research and the requirement to recreate original documents in high quality reproduction must have taken a lot of effort.
As usual there is no moral commentary on the events or people included in the survey of the building, The fact that some residents were Jews is ignored other than mentioned although readers may feel some irony present here. The bomb was neutral in its effect - devastating but uncaring of past history or status. It is a simple record of what happened - and an imperfect record as all historical reconstitution must be
This is one of 100 signed and numbered copies (aside from 20 HC copies) on a label on the inside front cover of the archival box and is in VG+ condition, complete although the two original thick rubber bands that close the folder are missing. A wonderful production. 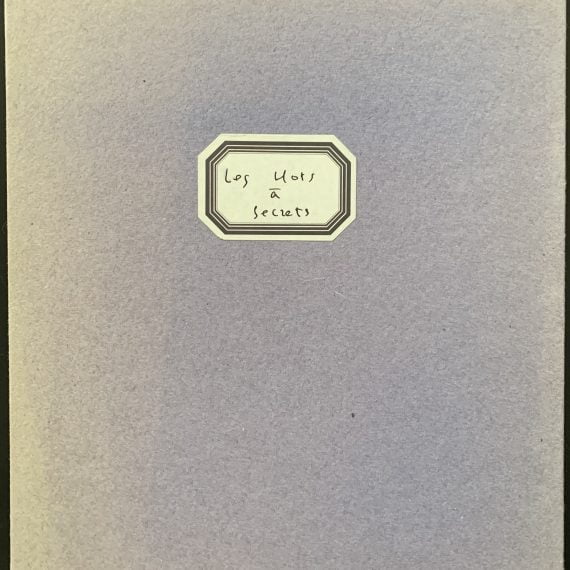 Paris, Yvon Lambert Editeur, 1993
Two part blue cardboard box with handwritten title label content of 19 sheets containing Lebensztejn's text "Une rêverie émanée de mes loisirs," each accompanied by an original line drawing by Boltanski on tracing paper.
Each text page is thus overlaid with a drawing; the lines, drawn in 5 color pencils, link letters in the text, with the combinations of letters forming quotations from 5 writers; a letterpress key to the drawings gives the quotations (from Tadeusz Kantor, Federico Fellini, Jacques Demy, the Talmud and Ingmar Bergman) in mirror writing. Each text sheet/drawing pair is enclosed in a green paper folder.
There is an introductory page and a colophon page as well as a sheet explaining the work with the key to the drawings.
Boltanski's intervention into the book finding hidden texts within the larger commentary.
Very good condition with some minor fading to the blue box but internally VG++. Scarce. 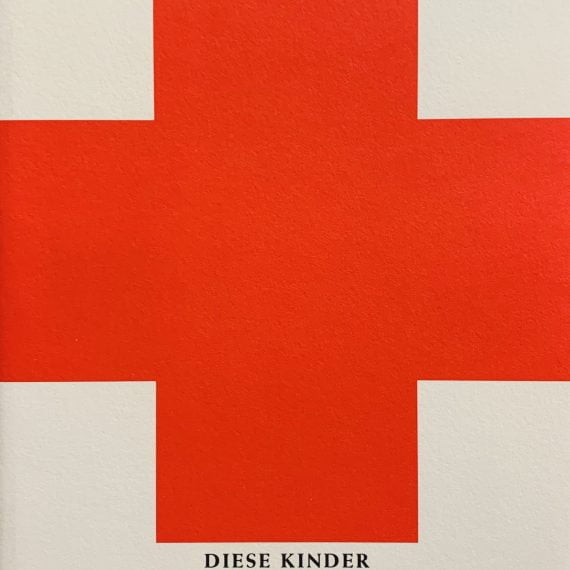 Munich: Gina Kehayoff Verlag, 1994 24 x 14,5 cm, 88pp. card covers. Artist's book. Facsimiles of portraits of orphans published by the Red Cross in Germany after the war and distributed throughout Germany in order to find those portrayed any relatives that may have survived the war. The artist writes in a foreword that " we also we seek our parents". This copy is one of 77 hand numbered copies which has an original re-photographed advert from the original red cross poster which is signed and numbered in blue ink on the back also. Fine. 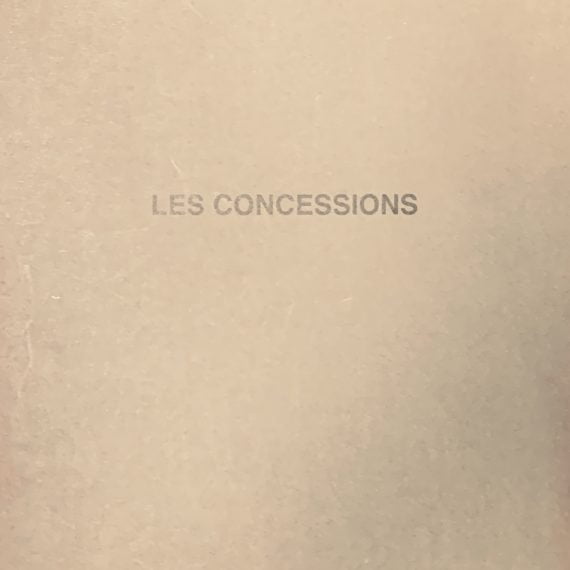 Paris: Yvon Lambert 1996
41 x 30.6cm, outer folder eight 40 x 30cm, 1pp b/w reproductions of appropriated photographs printed on semi-opaque paper and with eight transparent 40 x 30cm overlays with text printed in red.
The short titles associated with each image seem incongruous - an image of a young woman in swimming costume with a blanket over her head is noted as "La Belle Hotesse" (the Beautiful Hostess), a priest with a baby is denoted as Intense Souffrance (intense suffering). However the overlays can be moved around and placed over different images - and the titles given new context. Or more accurately the photographs are given new associations with any new text - which one may suggest is the point of the work: an anonymous image is read by a viewer using conscious and unconscious visual cues but when a language descriptor is added new associations are formed and the semantic context changed. Concessions are made.
This is one of only 50 signed and numbered examples on a colophon sheet. VG+ 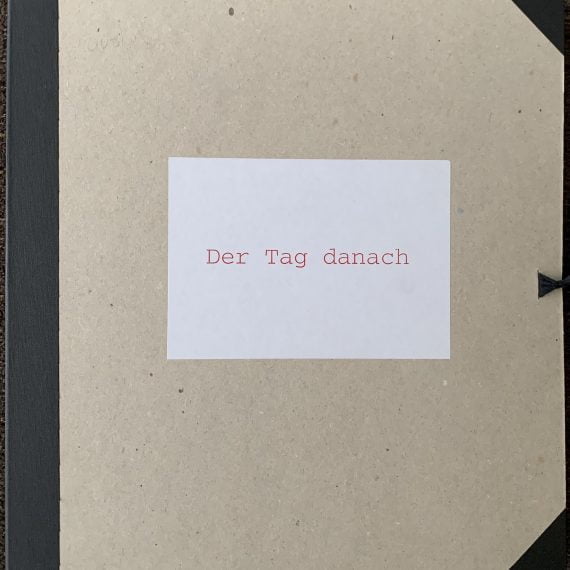 München. Gina Kehayoff. 2000 31 x 29.2cm, printed folder with ribbon content of 29 cardboard pages with mounted (photo corners) colour photographs of the various installations by the three artists in a former sanatorium outside Berlin. Additionally there is a large colour poster showing the layout of the project and a text in English by Ilya Kabakov.,br. There is also a colophon sheet tipped onto the inside back of the folder signed and numbered by all three artists in pencil. One of of 69 deluxe copies. VG+. 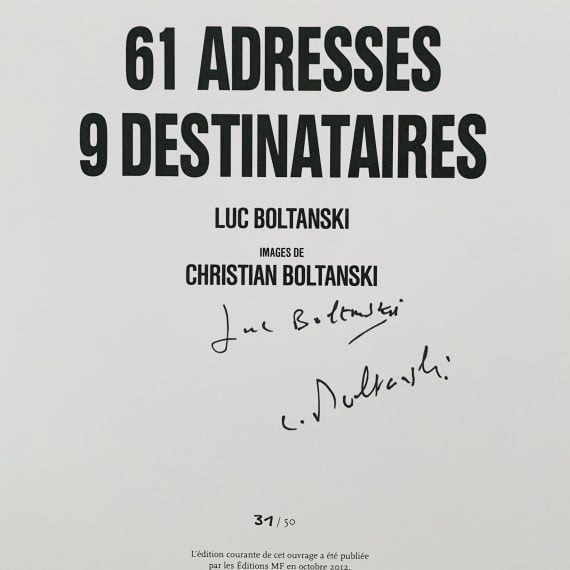 61 ADRESSES 9 DESTINAIRES. 2012. DELUXE EDITION – ONE OF ONLY 50 NUMBERED COPIES SIGNED BY BOTH ARTISTS.

Paris: Edition MF, 2012
23 x 18.5cm slipcase with embossed lettering. Content of 4 x 6pp folded 22.5 x 17cm sheets and one outer folder - 22 x 18.5cm, 4pp all on card. The poems are by Christian Boltanski’s nephew and the images (distorted b/w portraits of a woman) are by the uncle.
This is one of ONLY 50 copies which were signed and numbered by the writer and artist. Fine. Scarce.