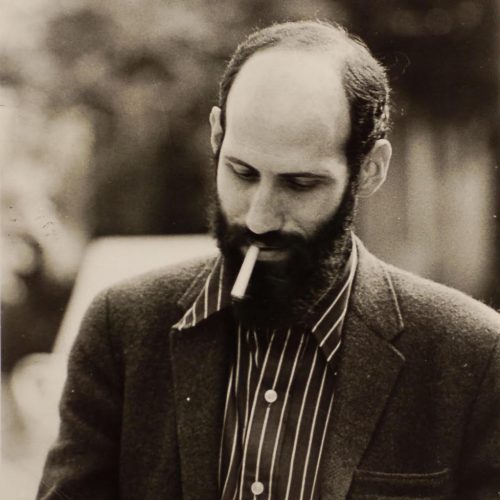 The filmmaker Jud Yalkut not only made some of the most important documentary films in the East Coast USA avant grade art scene but he was close friends with Nam June Paik, Charlotte Moorman and Jonas Mekas amongst others and was active in the avant grade of the 60s and 70s.

A significant figure in avant grade cinema, Yalkut initially gained a lot of attention from his involvement in the USCO group: an American media art collective founded by Gerd Stern, Michael Callahan, and Steve Durkee but to which Yalkut soon became a significant figure creating many of the group’s installations, films and often designing the group’s publicity material. The films TURN, TURN, TURN , GHOST REV, DIFFRACTION FILM, and DOWN BY THE RIVERSIDE might be regarded as works that were primarily created as USCO artworks although the first of these films was created in co-operation with Nam June Paik – the giant of experimental video with whom, thereafter, he regularly collaborated.

The emerging counter culture scene and the rise of rock music as the dominant musical genre in the United States led Yalkut to make a number of films involving musicians and, in particular, the film AQUARIAN RUSHES where Yalkut documented the events and bands of Woodstock. He continued to involve himself with new music performances including being part at times of the Fluxorchestra (which had a fluid and ever changing membership) but he also continued to create major installations using projections and music. Even in his later years he would often film musicians including jazz innovators such as Warren James and Pee Wee Russell.

In 1967 Yalkut made SELF-OBLITERATION the most important film about Yayoi Kusuma which introduced her to a wider art audience. The film was shown regularly on the art circuit and drew more attention to the filmmaker who by now was a common figure at screenings in New York and, later, in Ohio.

Yalkut continued to work well into his 60s and in the 70s started a film and video program at Wright State University, Dayton, Ohio. His later life was as primarily as a teacher with occasional forays into the world of art. He died in 2013 only months after a major retrospective of this life and works was shown at Dayton University, OH.

Here we offer an archive of the ephemeral and other material from Yalkut’s activities – mostly from the period 1965 to 1975 when he was most active. There are very scarce items here including a number of unique horoscopes that Yalkut made for his friends and colleagues and, in particular, there is the original collage/paste up that Yalkut made for the premiere of SELF-OBLITERATION in 1967 which incorporates an original photograph by the artist of Kusama.

In total there are 72 items in this archive – all came directly or indirectly from Yalkut’s own holdings. The collection is for sale (or even available for exhibition under certain circumstances) – do enquire as to price. Please note we may consider selling individual items from this group – again please enquire. 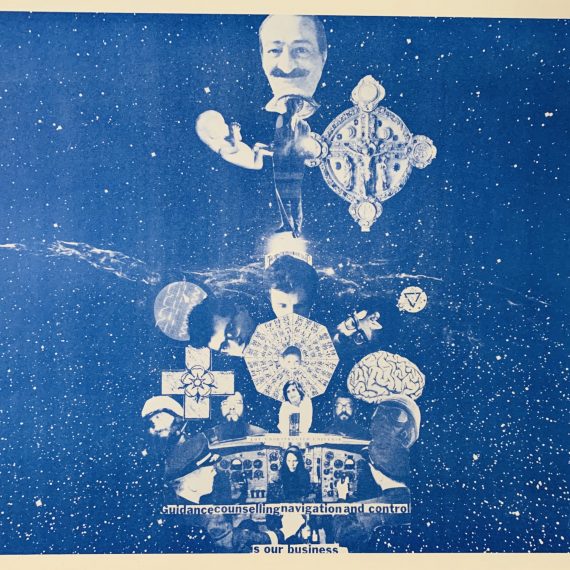 GUIDANCE COUNSELLING NAVIGATION AND CONTROL IS OUR BUSINESS. C. 1964.

Garnerville: USCO, n.d. (c. 1964) 22 x 26cm, blue/w publicity leaflet with a full sheet reproduction collage by Yalkut to promote the co-operative art group USCO – USCO founded by Gerd Stern, Michael Callahan, and Steve Durkee in New York. USCO, an acronym for Us Company or the Company of Us. A very scarce item. 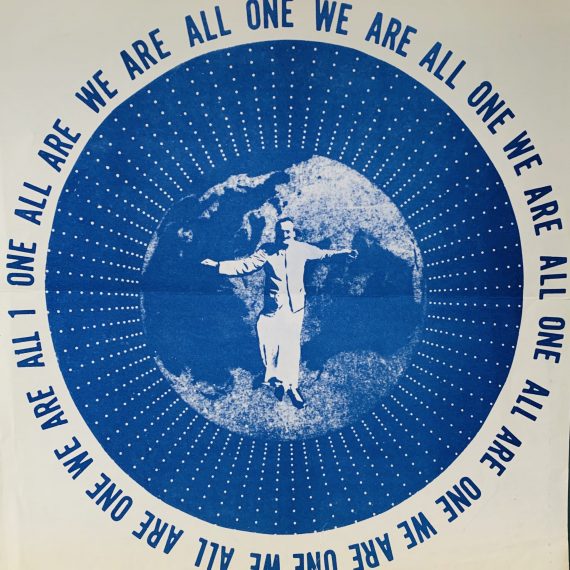 Garnerville: USCO, n.d. (c. 1964) 22 x 26cm, blue/w publicity leaflet with a full sheet image of a guru that Yalkut followed and the title text around him the co-operative art group USCO – USCO founded by Gerd Stern, Michael Callahan, and Steve Durkee in New York. USCO, an acronym for Us Company or the Company of Us. A very scarce item. 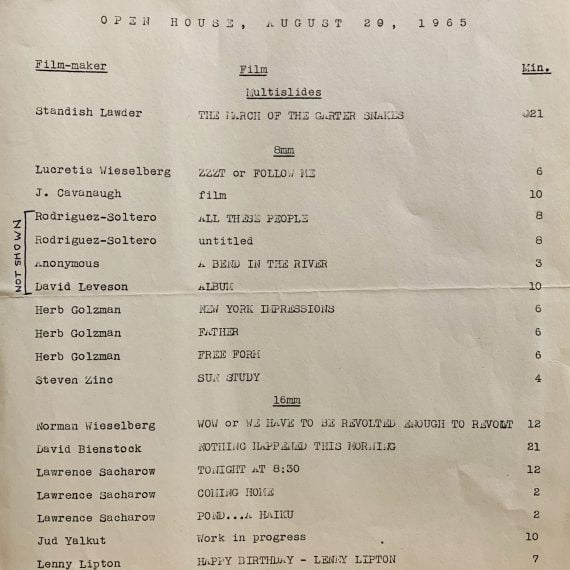 NYC: Film-Makers’ Cinematheque, 1965 28 x 21.5cm, 1pp. Mimeograph leaflet (typographic only) for this day of experimental films with projections from Herb Golzman, Lawrence Sacharow, Lenny Lipton, Donald Bolkman and Judd Yalkut. The day was organised by Jonas Mekas. This was one of Yalkut’s first ever screenings of a work. VG. 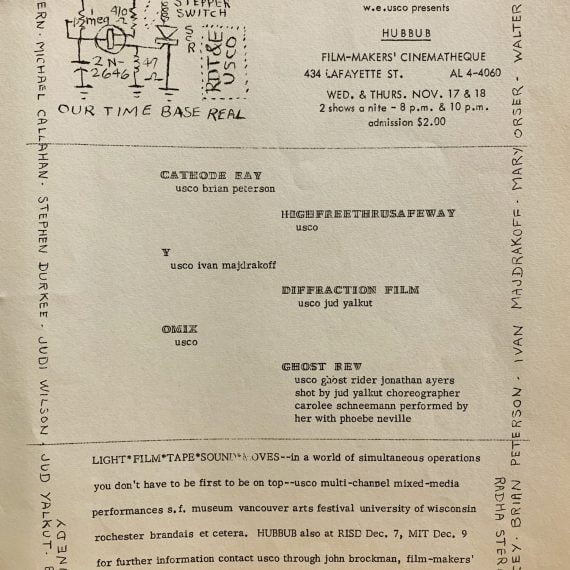 NYC: Film-Makers’ Cinematheque, 1965 28 x 21.5cm, 1pp. B/w offset leaflet for an USCO event (USCO stood for ‘The Company of Us’, a media arts collective which was formed by Gerd Stern, Michael Callahan, and Steve Durkee and of which Jud Yalkut was the experimental film maker) – the “mis-media performances” shown were Cathode Ray, HIGHFREETHRUUSAFEWAY, Y, Diffraction Film, Omix and Ghost Reve. The latter performance was choreographed and performed by Carolee Scheemann along with Phoebe Neville and shot by Jalkut. VG+. 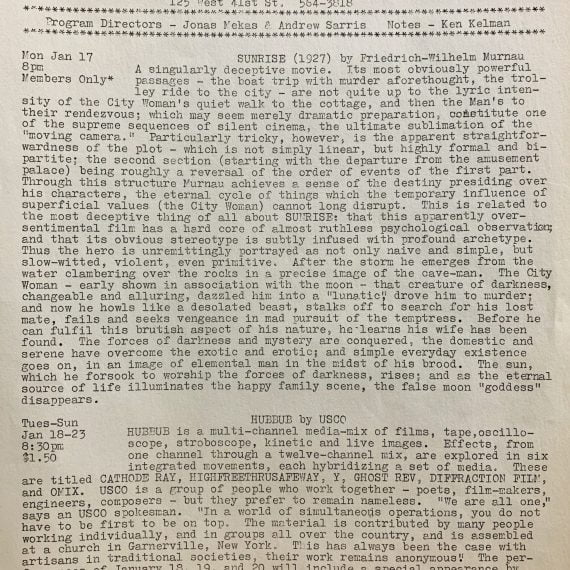 NYC: Film-Makers’ Cinematheque, 1966 28 x 21.5cm, 1pp. Offset lithographic leaflet (typographic only) for the January showings and events which include Sunrise by Friedrich-Wilhelm Murnau and the week of events – HUBBUB – by USCO which includes the works: Cathode Ray, HIGHFREETHRUUSAFEWAY, Y, Diffraction Film, Omix and Ghost Reve: although not stated the latter performance was choreographed and performed by Carolee Scheemann and shot by Jalkut. VG. 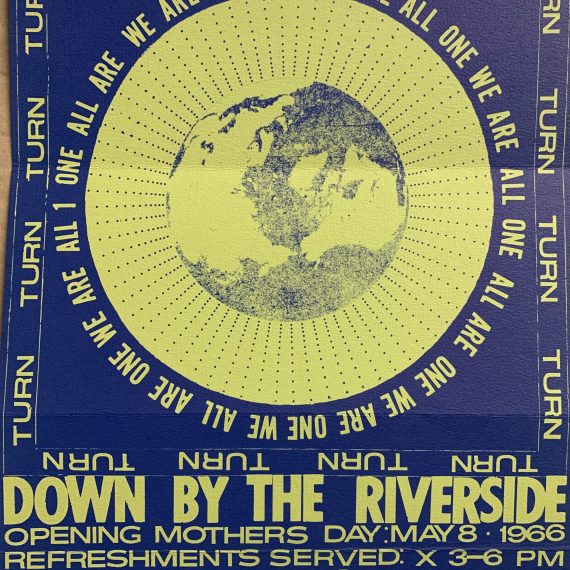 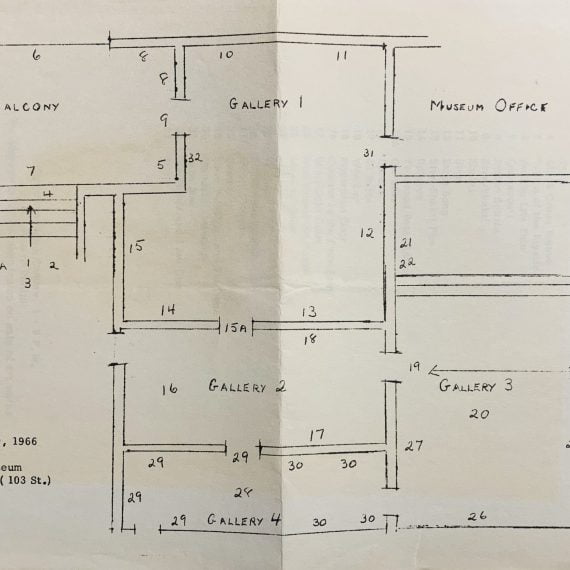 NYC: Riverside Museum, n.d. (1966) Two stapled sheets – both 35 x 21.5cm, 1pp. The floor Map of USCO’s Exhibition at Riverside Museum with a list of the works being displayed for this one day event “A public service for enlightenment” by USCO. Folded for storage. 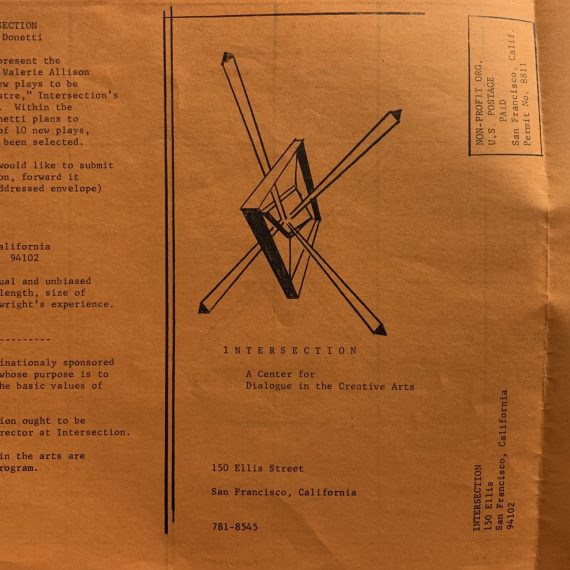 San Francisco: Intersection: A Center for Dialogue in the Creative Arts, 1966 21.5 x 33.5cm, 2pp – the programme for a series of events at the SF arts space run by Laird Sutton. The month of June featured a night of “”kinetic films” by Yalkut and a “”media mix”” by USCO two weeks later, in addition to a night of Stan Brakhage’s work.” Folded once for storage else VG+. 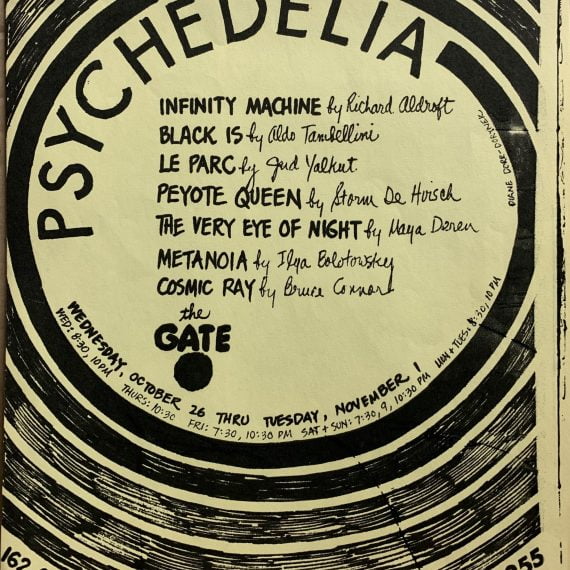 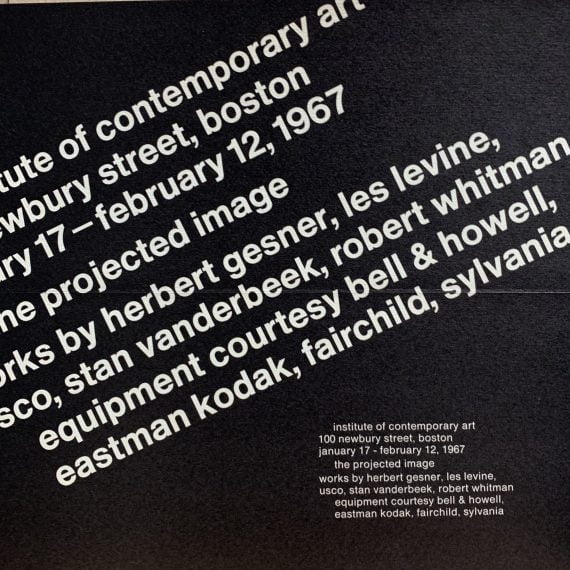 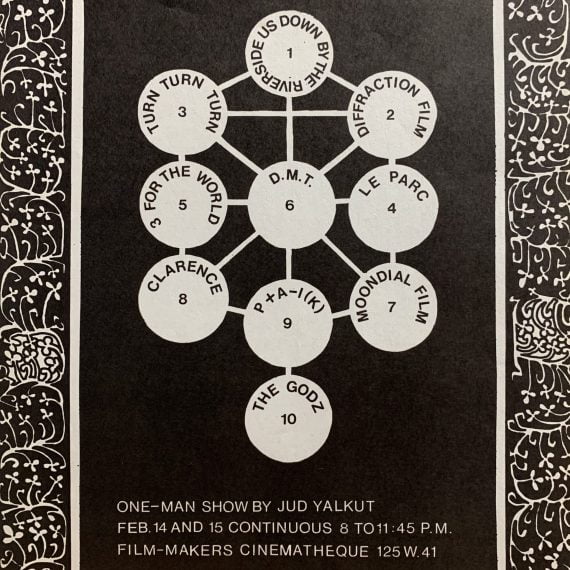 NYC:Film-Makers’ Cinematheque, 1967 27 x 21.5cm, 1pp b/w offset small poster with a design by Yalkut using the standard Sefirot design only replacing the 10 attributes/emanations in Kabbalah with ten of his films. Some of the works shown such as Turn Turn Turn and Pa+ A – I (K) involved Nam June Paik. VG. Scazce. 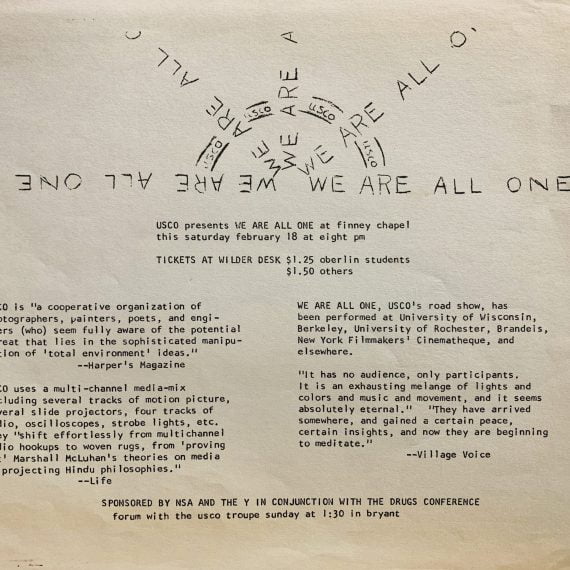