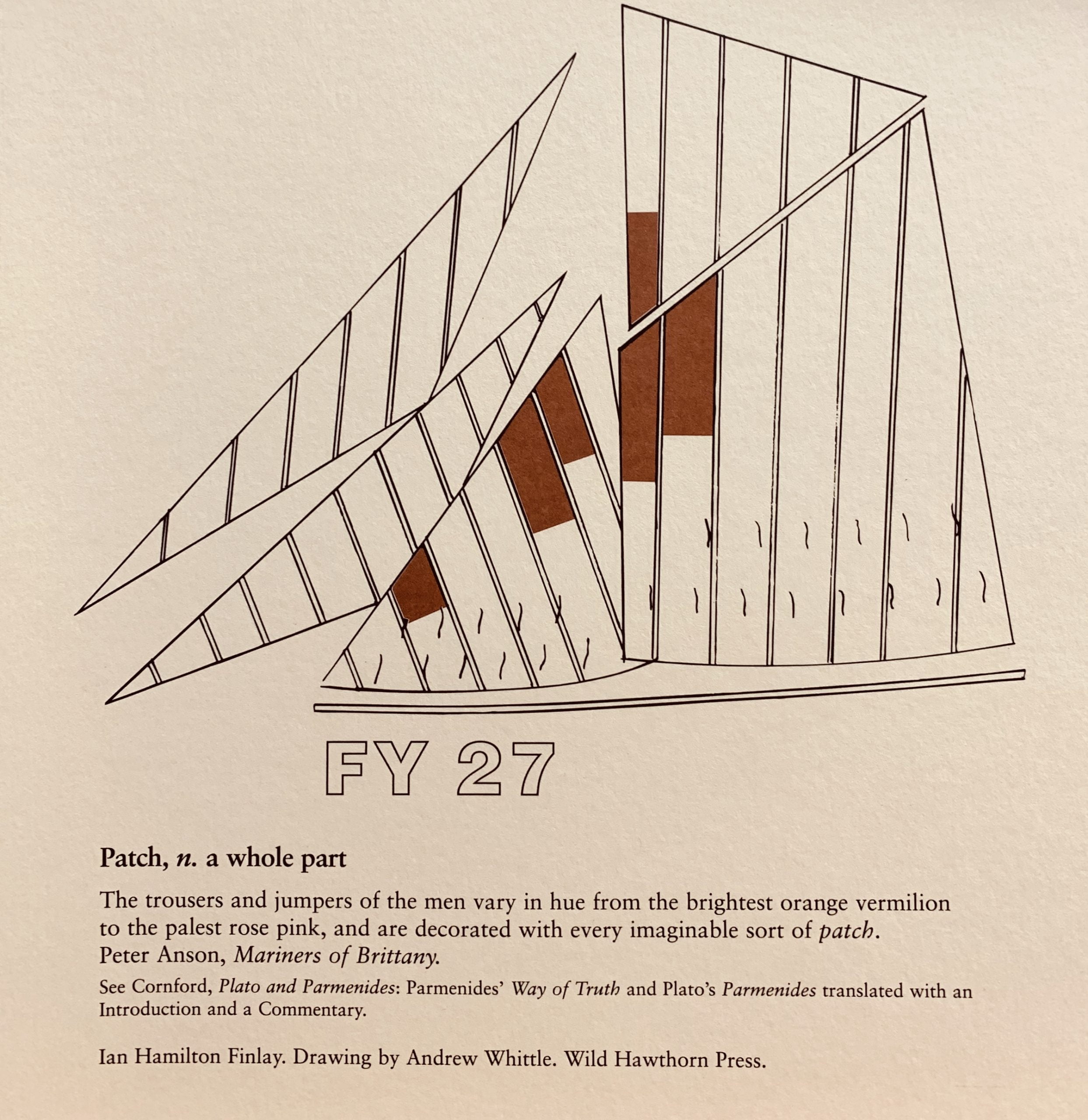 Posted at 13:37h in Artist's Postcards

Little Sparta: Wild Hawthorn Press, 1999
19.5 x 18.8cm, 1pp card printed black and brown on cream. A line art drawing of the patched sails of a boat with the number FY 27 by Andrew Whittle is conjoined with a quote from Peter Anson's Mariners of Brittany.

"The trousers and jumpers of the men vary in hue from the brightest orange vermilion to the palest rose pink, and are decorated with every imaginable sort of patch."

A patch is defined by Finlay as Patch, n, a whole part.
As noted in other works Finlay saw the act of patching as denoting care and giving worth to things. This image is also found in the unique large sculptural work FY27 in this collection. . VG+. 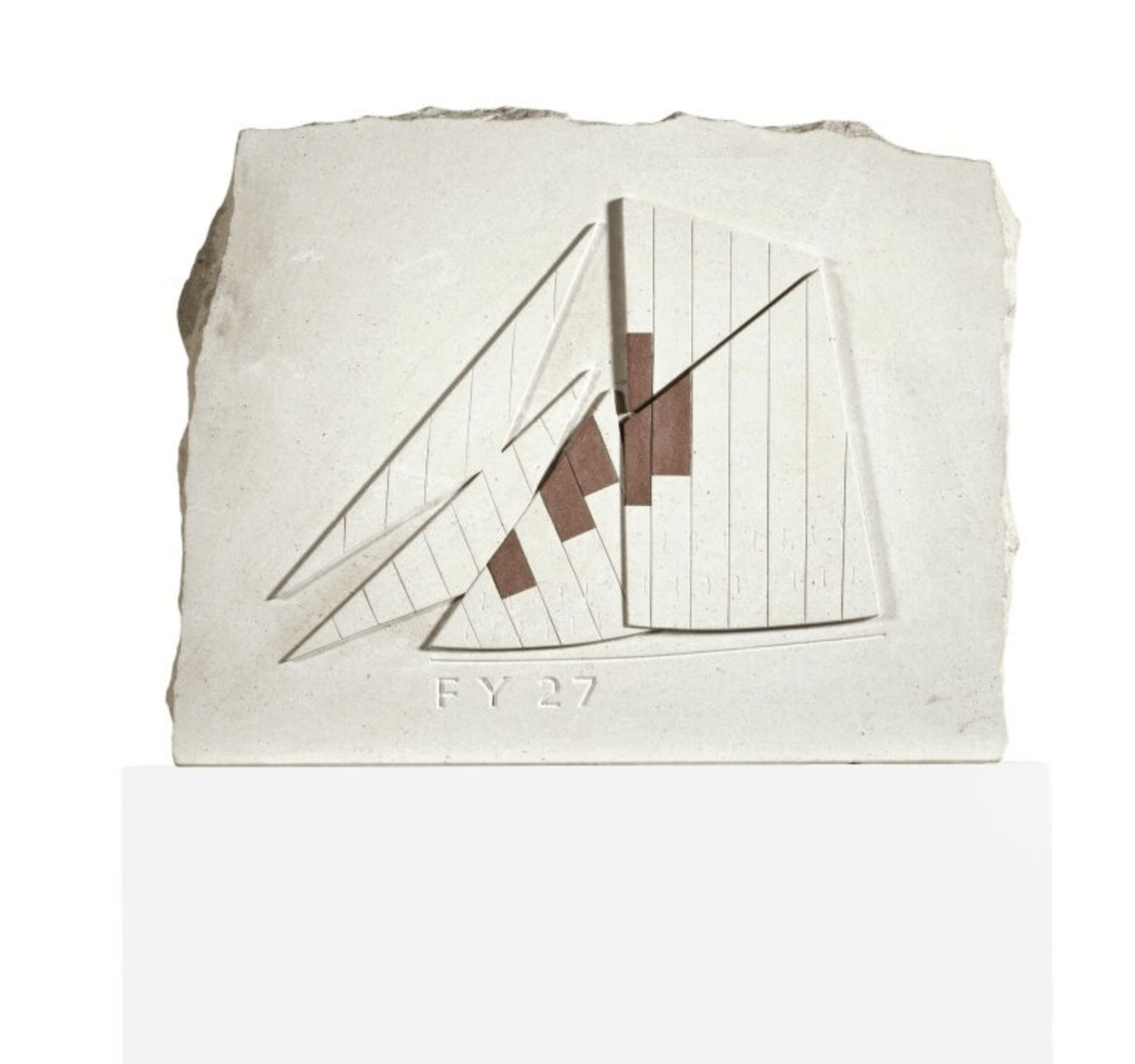 43 x 57 x 15cm, stone with red paint. Executed in 1998. Unique sculpture with a relief image displaying the sails of a boat that has been “patched”. This work relates to similar works by Finlay including postcards and prints where the patching of a sail is compared to that of a poor person’s clothing - but also references Picasso’s harlequins with their colourful divisions of clothing and patches on windmill sails. The work was created for IHF after his instruction by Andrew Whittle.
The work comes with the original custom made painted wood stand and base - c. 150 x 65 x 20cm.
Previously exhibited at
Barcelona, Fundacio Joan Miró, 'Ian Hamilton Finlay: Variations on Different Themes', February - March 1999
St Ives, Tate St Ives, 'Ian Hamilton Finlay, Maritime Works', March - June 2002
Edinburgh, Ingleby Gallery, 'Ian Hamilton Finlay', June - July 2009
Purchased from Frank and Lorna Dumphy Collection via auction and prior sale from the artist to the collection via Ingleby Gallery in 2001

12 Sep A PROPOSAL FOR THE GROUNDS OF THE SERPENTINE GALLERY. 1997.

Little Sparta: Wild Hawthorn Press, 1997
11 x 22cm, 20pp plus two fold outs and leaf patterned boards with tipped on label. A proposal for the grounds of London's Serpentine Gallery which consisted of semi-circle of 8 benches with plaques and a single central plaque in the Meadow Area. The texts are all translations from Vigil talking of a distant view - but each translation takes on different nuances of the original. Translations are by Finlay himself with Jessie Sheeler, Samuel Palmer, C Day Lewis, W F Jackson Knight, Harry Gilonis, John Caryll, and Charles Calverley. Virgil's own Latin quotation is also present on the final bench.
A further plaque again quotes Virgil: "Home, goats, home, replete, the evening star is coming." - a quotation that in which one recognises aspects of Finlay's most famous work - "Evening will come, they sew the blue sail."
A massive carved circular paving stone is also proposed to be placed at the entrance to the gallery listing the latin names of trees that are found near to the gallery. Lettering was drawn by Peter Coates and Andrew Whittle. Maps and cover paper by Gary Hincks.