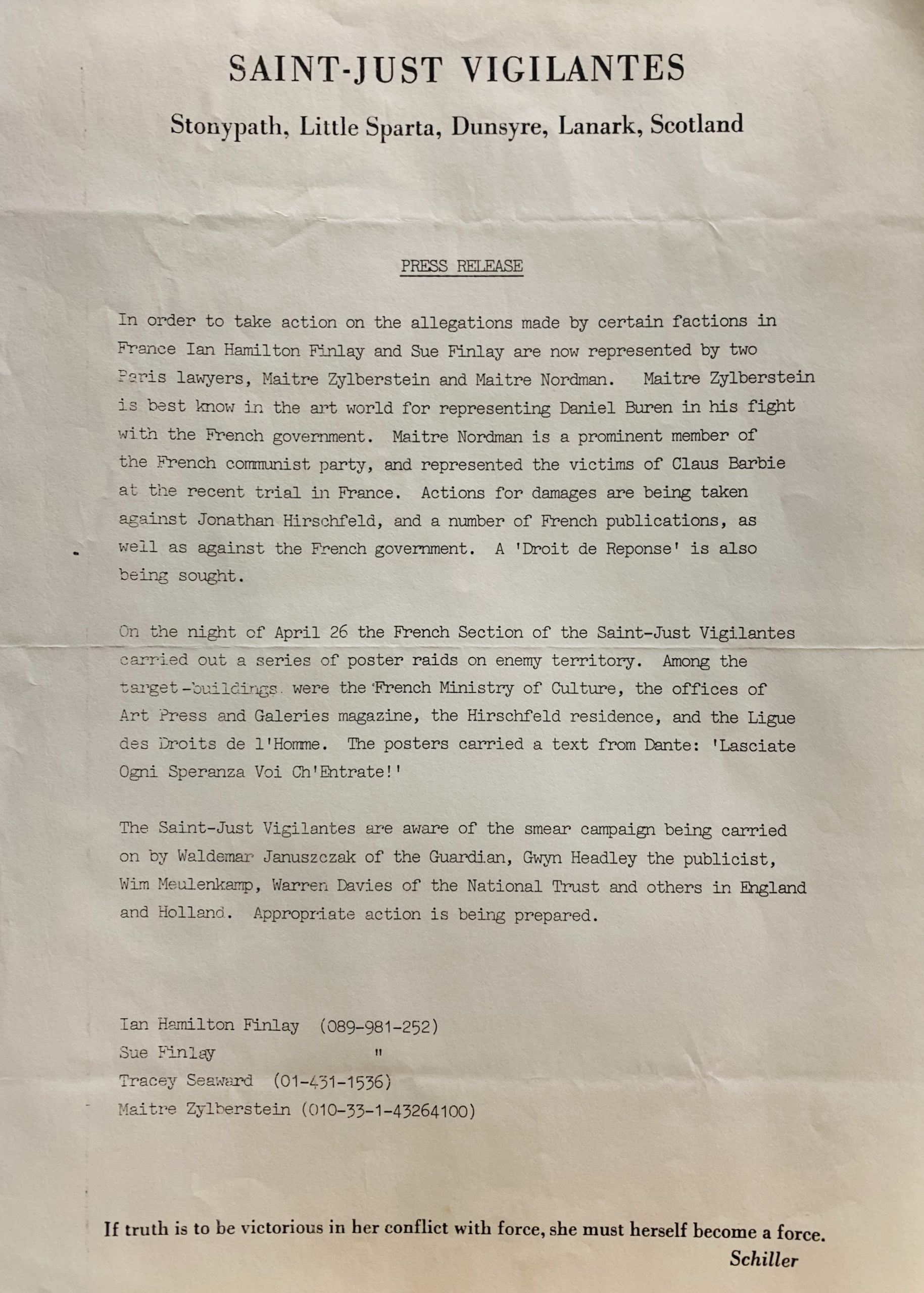 Little Sparta: Finlay, n.d. (April 1988) An original vintage xerox 30 x 21cm, 1pp with a Press Release from Finlay announcing the appointment of two Parisian lawyers - Maitre Zylberstein and Maitre Nordman. it notes that the former represented Daniel Buren when he was in conflict with the French Government and the latter a prominent member of the French Communist Party and represented the victims of the Nazi Claus Barbie in the (then) recent trial in France.
The statement announces that "actions for damages are being taken against Jonathan Hirschfeld and a number of French publications as well as against the French government. A "Droit de Reponse" is also being sought."
The statement also announces that "on the night of April 26 the French Section of the Saint-Just Vigilantes carried out a series of poster raids on enemy territory. Among the target-buildings were the French Ministry of Culture, the offices of Art Press and Galeries magazine, the Hirschfeld residence, and the Ligue des Droits de l'Homme. The posters carried a text from Dante: "Lasciate Ogni Speranza Voi CH'Enratre!".
Those words are the famous warning over the gates to Hades - Abandon hope, all who enter here!
Finally the statement notes "the smear campaign being carried out by Waldemar Januszczak of the Guardian, Gwyn Headley the publicist, Wim Meulenkamp, Warren Davis of the National Trust and others in England and Holland. "Appropriate action is being prepared."
A copy of the press release distributed by Finlay to friends and supporters as part of the latter's information campaign against his opponents - in it all of Finlay's enemies are name checked. 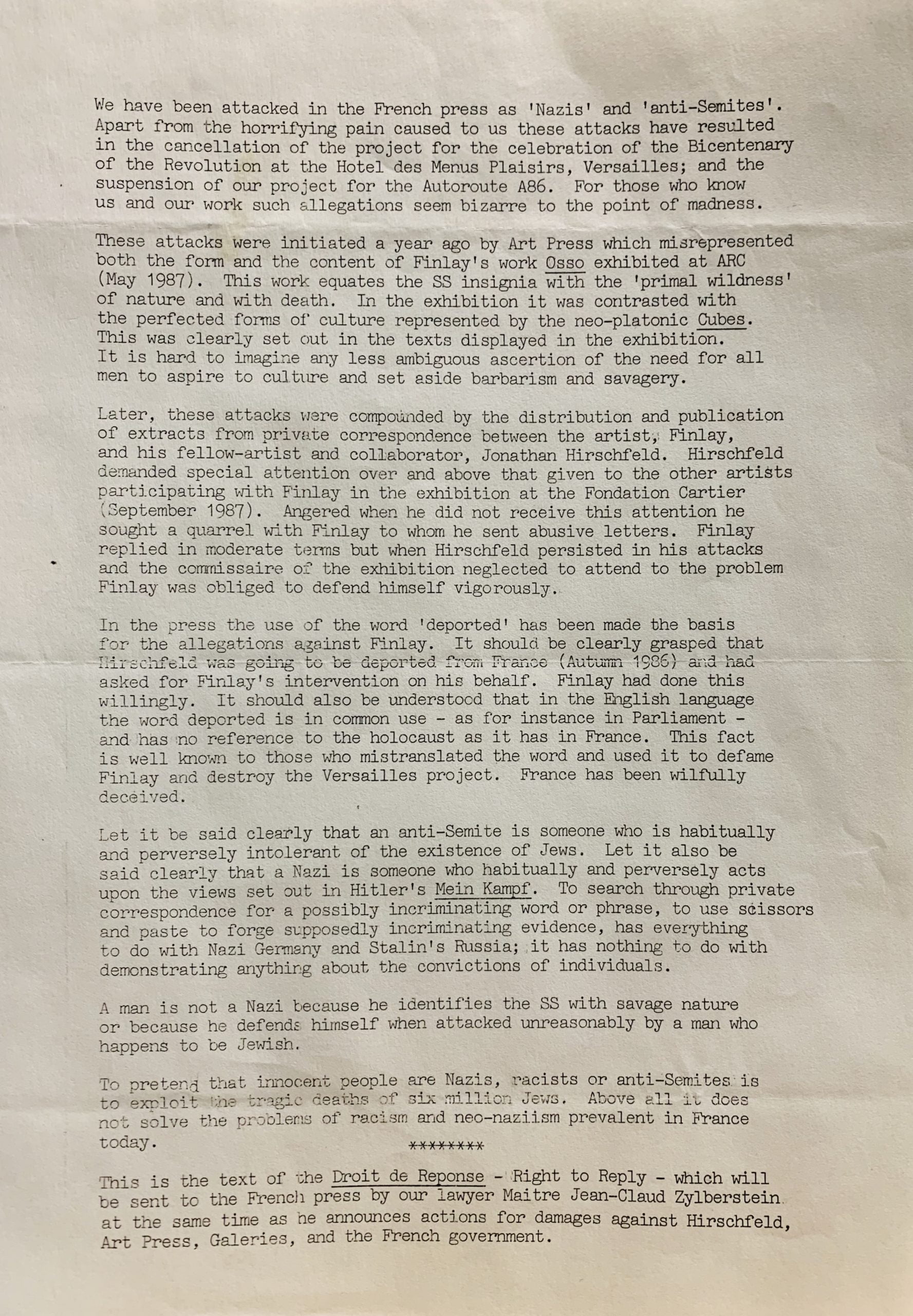 n.p.: n.p. (Maitre Jean-Claud Zylberstein), n.d. (1988)
An original vintage xerox 30 x 21cm, 1pp copy of a statement (here in the original English) made by Finlay's lawyer Maitre Jean-Claud Zylberstein on the day that he announced actions for damages against Jonathan Hirschfeld, Art press, the magazine Galeries and the French Government.
The statement notes the horror felt by Finlay at being attacked as being a Nazi and being anti-semitic and the background where a work OSSO exhibited in Paris ARC in 1987 was mis-interpreted: "the work equated the SS insignia with the "primal wildness" of nature and with death. In the exhibition it was contrasted with the perfected forms of culture represented by the neo-platonic Cubes. This was clearly set out in the texts displayed in the exhibition".
The attacks on Finlay by Jonathan Hirschfeld who Finlay had co-exhibited with in the Fondation Cartier were also explained. Maitre Jean-Claud Zylberstein argues that Hirschfeld picked a fight in private correspondence with Finlay and then released them with deliberate mistranslations to make Finlay look bad.
"A man is not a Nazi because he identifies the SS with savage nature or because he defends himself when attacked unreasonably by a man who happens to be jewish."
...