04 May ORIGINAL XEROX COPY OF LETTER TO INEZ HORST-ALETRINO & ORIGINAL XEROX TRANSCRIPT OF THE RADIO PROGRAMME IN WHICH CATHERINE MILLET LIBELLED FINLAY AS ANTI-SEMITE. 1988.

Little Sparta: Finlay, 4th May 1988
Two original vintage xerox stapled sheet (both recto) of a letter from Finlay to "Inez" (Inez Horst-Aletrino - a Dutch painter who was close to the Finlay family).
Finlay points out that his life has been a "nightmare" following the accusations of Catherine Millet and he notes he is inclosing for information his statement for a "right of reply" in France as well as a "transcript of the radio broadcast which led to the cancellation of the Versailles project".

Finlay points out that "none of those taking part have ever seen our garden. The broadcast is LIES and INVENTIONS designed to destroy Sue and I. Never before have I encountered such EVIL. It has changed our lives for ever."

An important letter showing the impact the controversy was having on the Finlay family at the time.
JOINT:
Twelve 30 x 21cm, original vintage xerox sheets (all printed recto) with a transcript (in French) of the radio programme hosted by Stephane Paoli in which Catherine Miller, Michel Blum and Catherine Duhamel discuss Finlay and libel him with charges of being anti-Semite. Millet begins by claiming a work (OSSO) has a SS double lightning strike symbol on it and makes the rather simplistic reading of the work that it is pro-nazi. They then raise the matter of Finlay's commission by the French government of a major public work and Blum claims that Finlay's correspondence with the jailed Albert Speer is further proof of national socialist sympathies. The programme continues in the same vein - Millet makes several claims about works in Little Sparta (works she had never seen) that were evidence of National Socialist sympathies eg the washing line that Sue and Ian Finlay joked was called the Seigfried Line (a joke that is obvious to those of British background as there was a popular anti-Hitler song of that name in the second world war "Hang out the washing on the Siegfried Line".
An important document that documents the outrageous way in which the French critics used lies and exaggerations to stoke public anger against Finlay his and eventually cause the commission to be withdrawn by the French Government without any explanation.
joint:
Handwritten cardboard envelope addressed to Inez Horst-Aletino from Finlay. 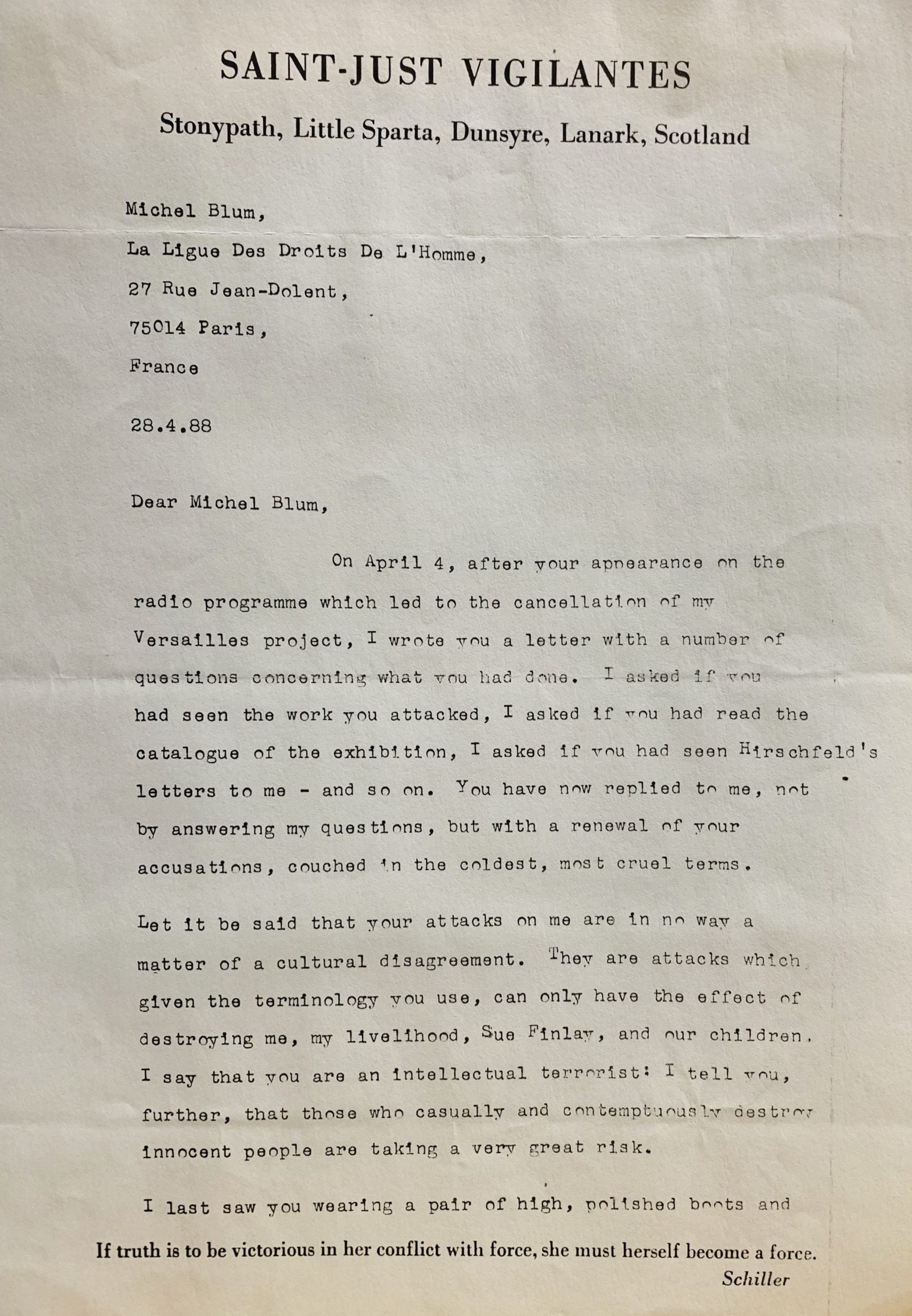 Little Sparta: Finlay, 30th April 1988
An original vintage xerox 30 x 21cm, 2pp with a reproduced letter from Finlay to Michel Blum (one of his accusers) at the Ligue des Droits de l'Homme - Finlay writes in anger that Blum has not replied to his questions asking if Blum had actually seen any of Finlay's works that he condemned but instead replied with "a renewal of your accusations, couched in the coldest, most cruel terms."
Finlay then continues:
"Let it be said that your attacks on me are in no way a matter of a cultural disagreement. They are attacks which given the terminology you use, can only have the effect of destroying me, my livelihood, Sue Finlay, and our children. I say that you are an intellectual terrorist: I tell you further, that those who casually and contemptuously destroy innocent people are taking a very great risk."
"I last saw you wearing a pair of high, polished boots and carrying a little whip in your hand. Your behaviour will not be forgotten. You will not always be so happy to be Maitre Michel Blum."
Finlay could be cutting.
Copied at the time by Finlay to distribute to friends and press as a source of information. VG 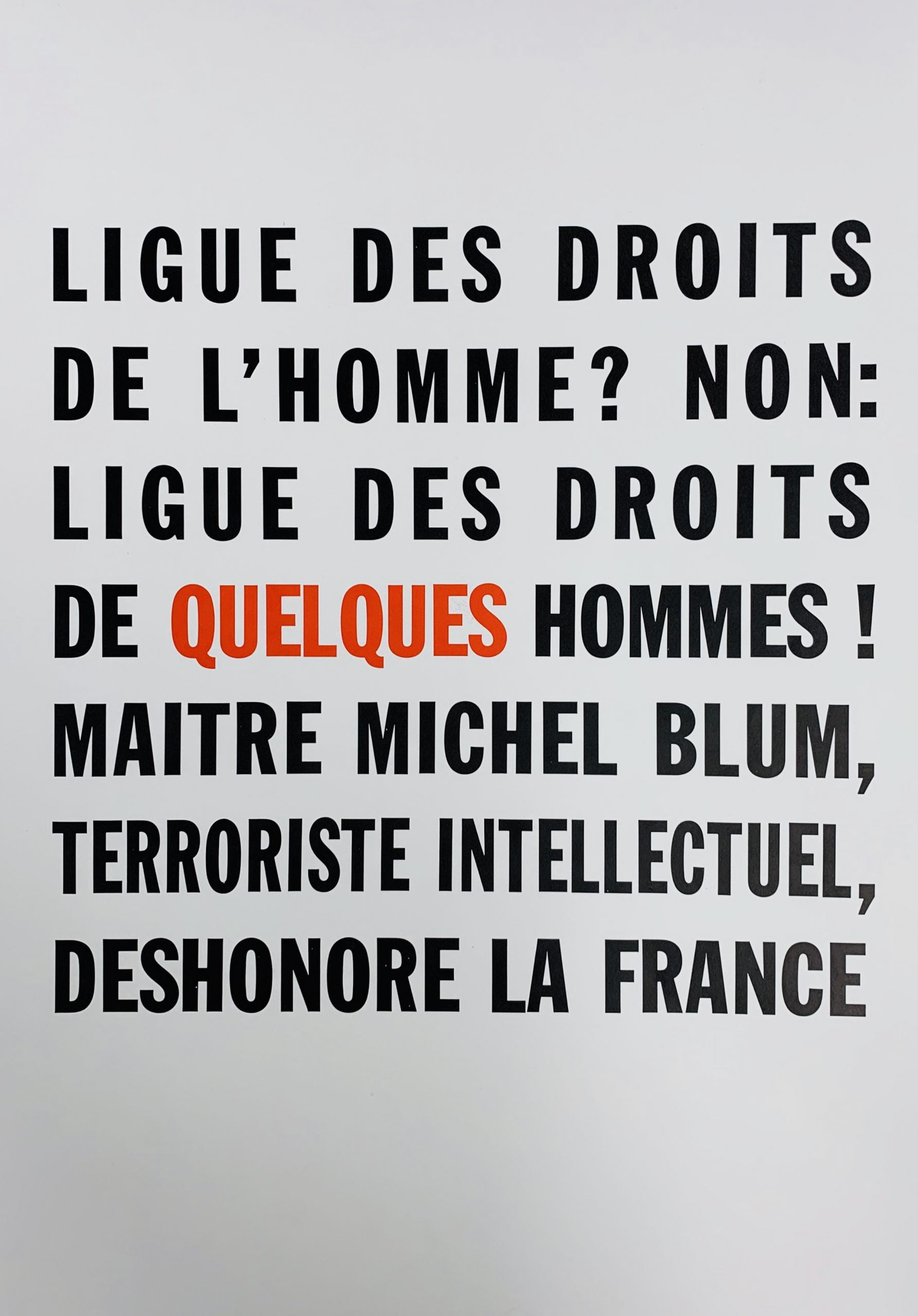 Little Sparta: Wild Hawthorn Press, 1987
42 X 30cm, red and black on white offset lithograph on satin paper. The text is an attack on Michel Blum "terrorist intellectuel" who "deshonore la France."
Blum along with Catherine Millet had attacked Finlay as "anti-semitic" because of his friendship with the architect Albert Speer (who had collaborated with the Nazis) and stopped a major commission from the French government being given to Finlay.
Blum was a member of the Ligue de Droits de L'Homme - hence this poster suggesting Blum was only interested in the rights of SOME men not all.
Blum was a particular egregious critic of Finlay - he knew little of the latter's work and made outrageous claims such as Finlay used swasticas in a large number of works - something that was clearly untrue. VG.