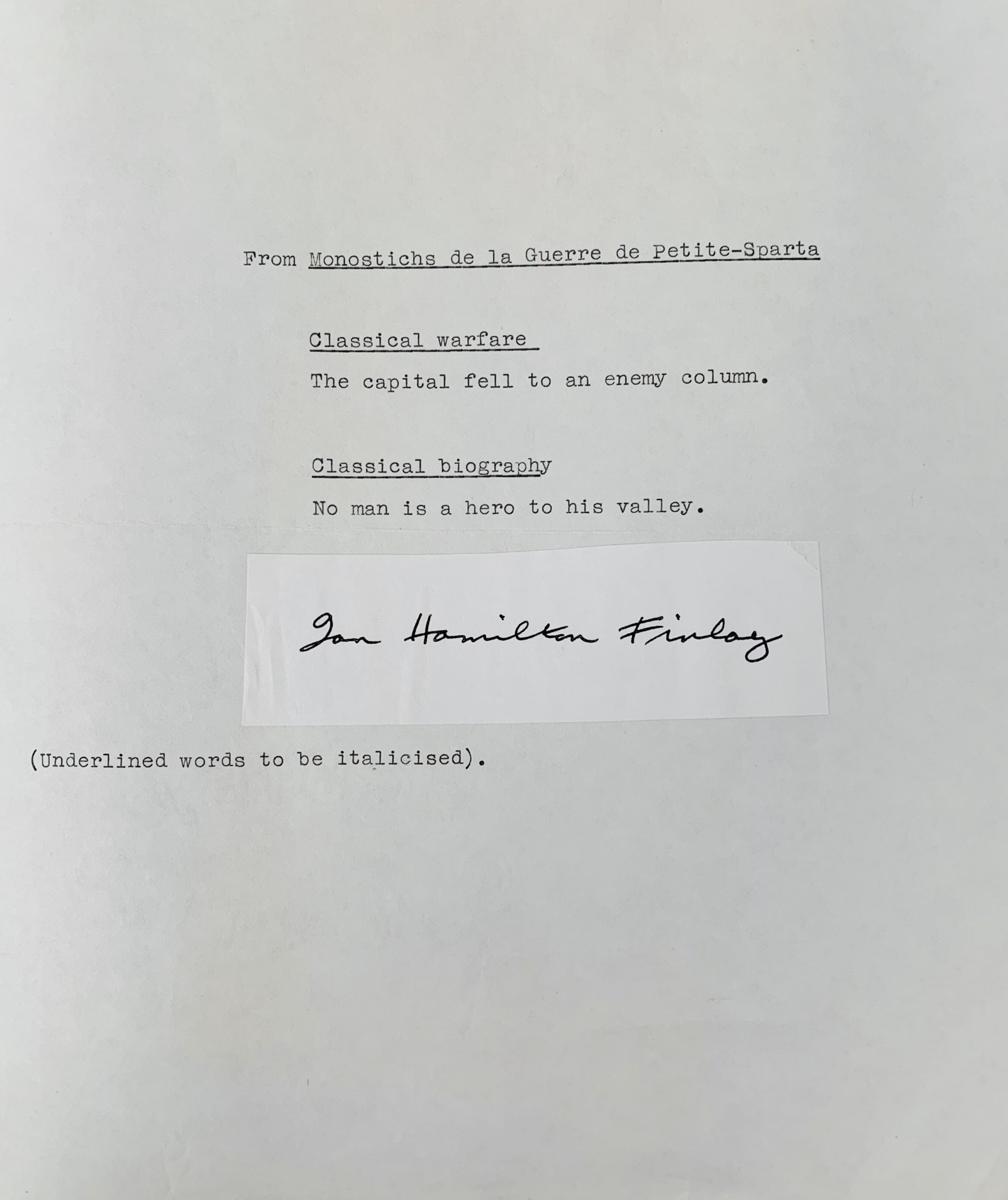 24.5 x 21cm, xerox copy of original typescript with pasted on reproduction of the artist''s signature.

This appears to be a paste up for later reproduction of the two original "1 one-line poems" sent by Finlay o be included in an anthology of poetry - namely, Classical Warfare and Classical biography. 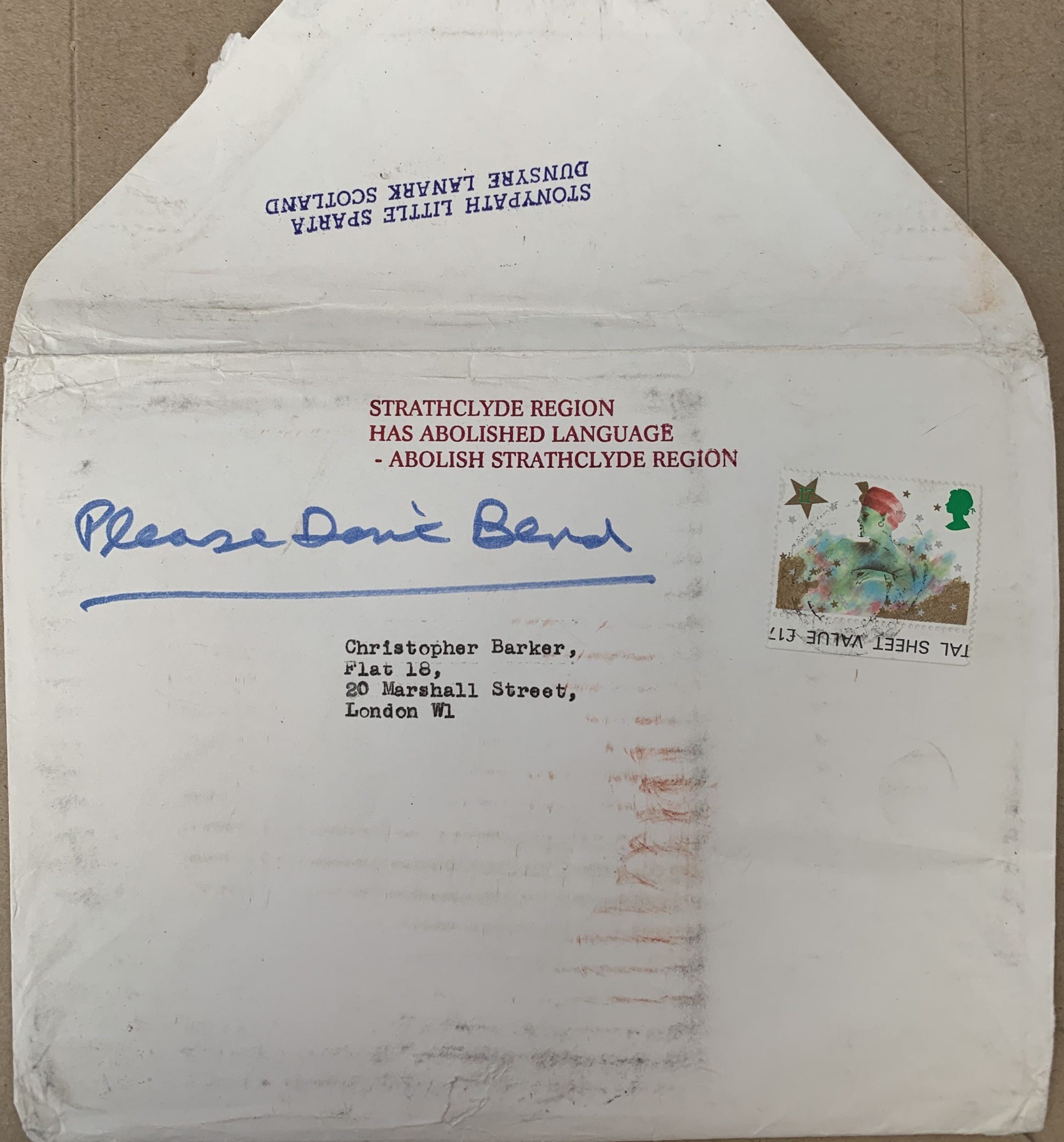 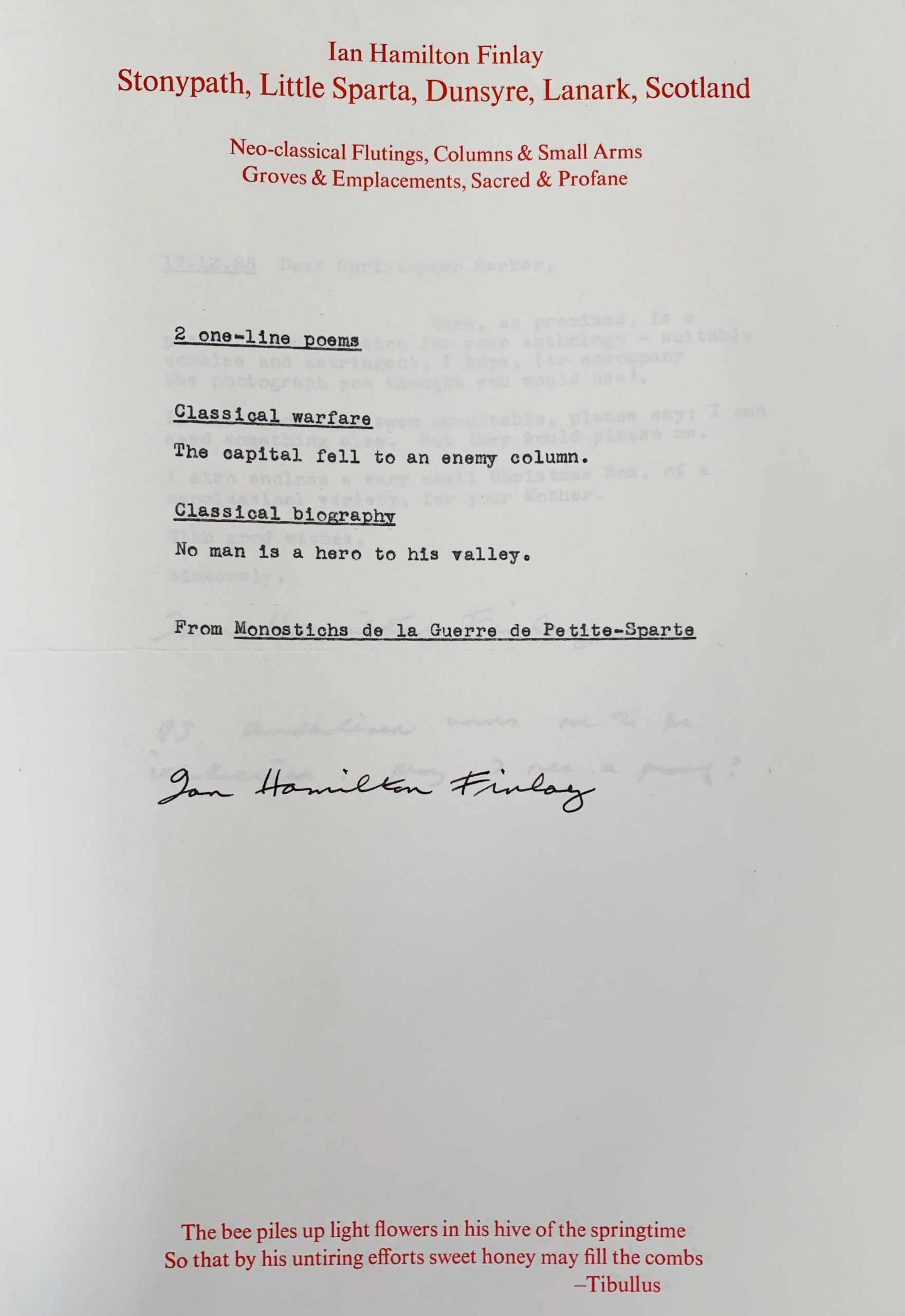 30 x 21cm, hand typed letter on printed letterhead paper.
A letter sent by Finlay to Christopher Barker containing two original "1 one-line poems". These were sent to be included in an anthology of poetry and photographs edited by the latter.
The first is thus:

Classical Warfare
The capital fell to an enemy column

which is a wonderful joke based on the parts of Greek columns as well as a cold statement about defeat in war.
The second is:

CLassical biography
No man is a hero to his valley.

Both are from "Monostichs de la Guerre de Petite-Sparta" a publication we have not yet seen under that title (which references the Littlle Spara Wars).
The letter is signed in black in at the bottom by Finlay in full.
The stationery as ever with Finlay is amusing in itself - the text under the address reads "Neo-classical Flutings, Columns & Small Arms,/Groves & Emplacements, Sacred & Profane" in red. At the bottom there is a quote from Tibullus about the efforts of bees.
An important and document with perhaps unique content. 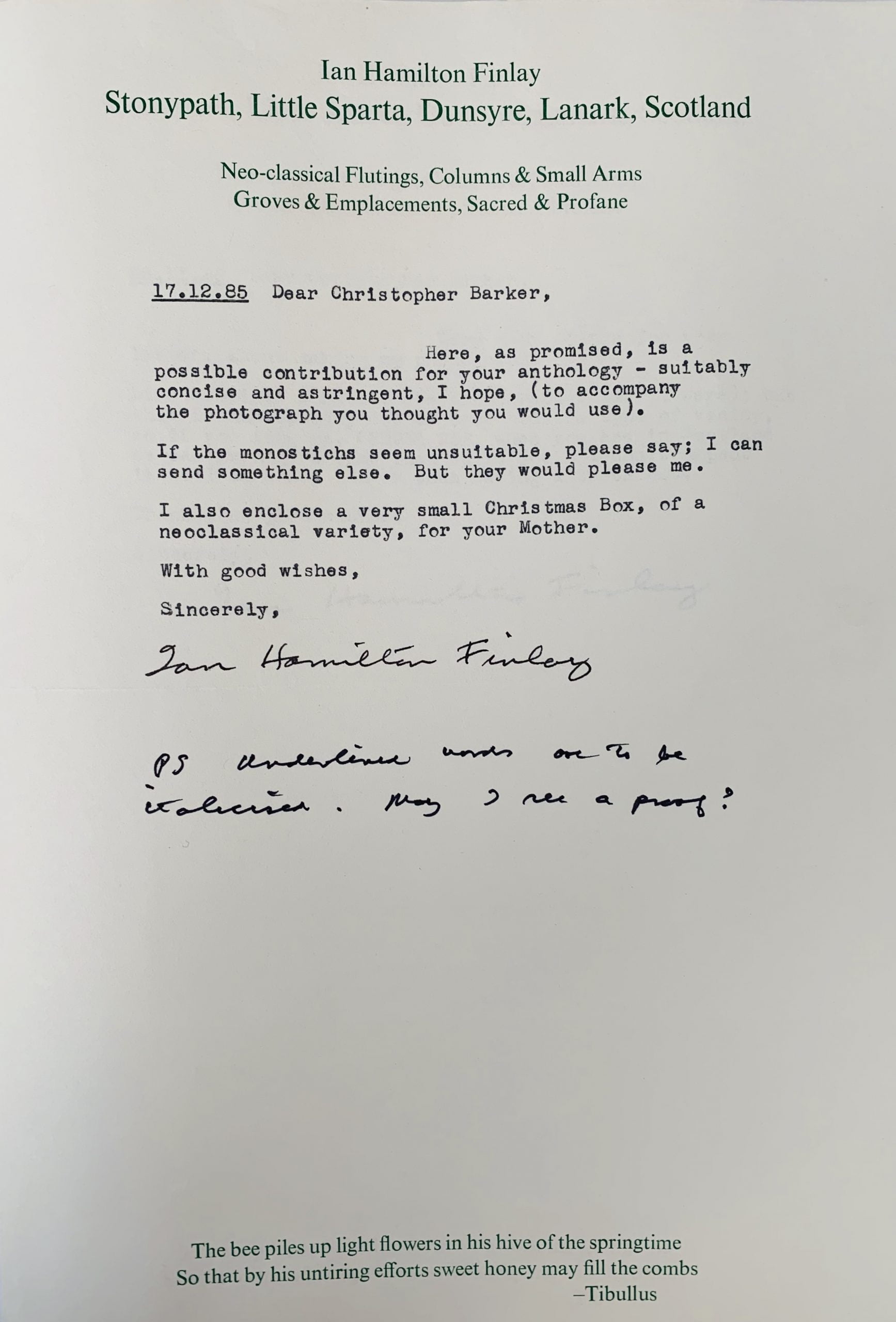 30 x 21cm, hand typed letter on printed letterhead paper.
A letter sent by Finlay to Christopher Barker dated 17.12.85
The letter notes the enclosure of a contribution from Finlay to an anthology - the actual enclosure is to be found here in this section. This letter notes that an alternative offering might be made if Barker asks but Finlay would prefer those. Finlay clearly knows Barker as he note the enclosure also of a "very small Christmas Box, of a neoclassical nature, for your Mother."
The letter is signed in full in black ink with a PS "that underlined words in the manuscript are to be italicised".
The same stationery design as used in the contribution is here but printed in green.

15 Dec THE DESIRE OF TOWING. 1985. WITH HANDWRITTEN CHRISTMAS GREETING FROM FINLAY.

Posted at 10:27h in Artist's Postcards

Little Sparta: Wild Hawthorn Press, 1985
9.4 x 20.4cm, 4pp card with two poems - one by Luois Zukofsky which was printed in POTH 6:
The
desire
of
towing
Conjoined with Finlay's
The
attire
of
snowing

The first refers to a barge being pulled along and the forces creating a desire to be somewhere else, the latter is a description of snow covering everything after a fall.
This example has a hand written Christmas greeting from Finlay on the left side of the inner card. VG+. 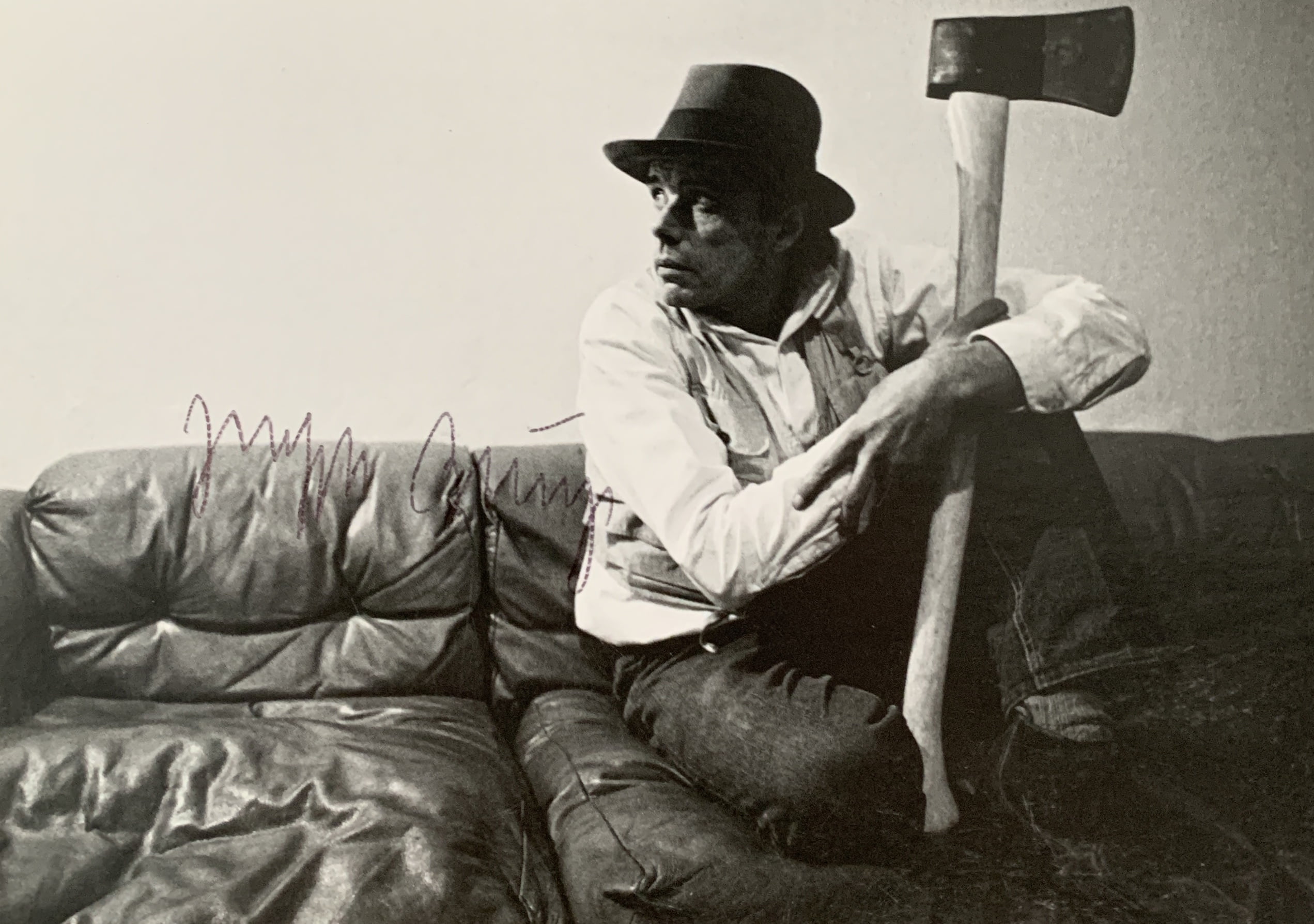 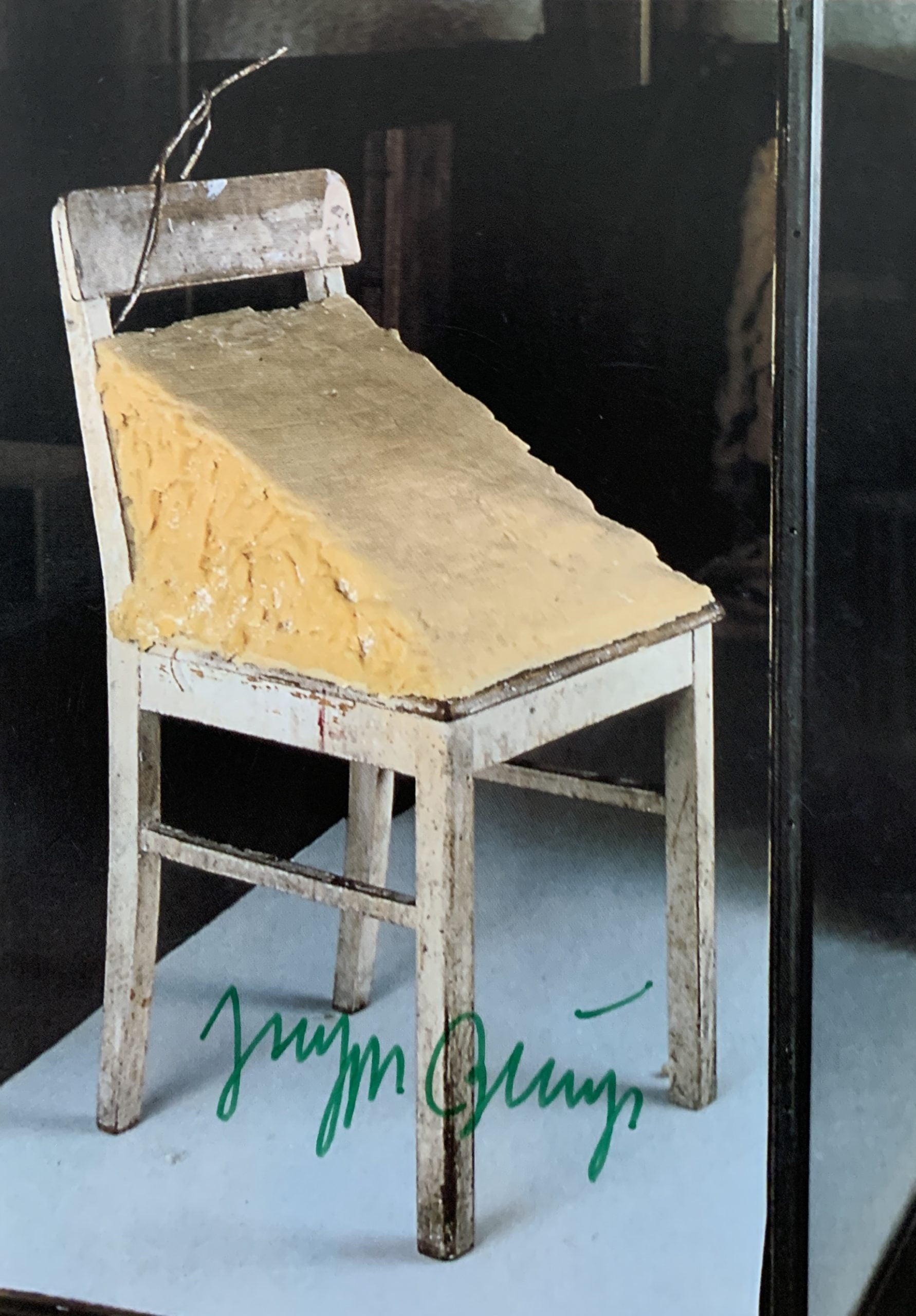 N.p,: n.p., n.d. (1985?)
15 x 10.5cm, 1pp b/w postcard displaying a colour photograph of Beuys' Fat Chair - over the image the artist has signed the card "Joseph Beuys" in green ink. On the reverse there is an attached label with biographical details of Beuys. it is not clear the origin of this card. VG+. 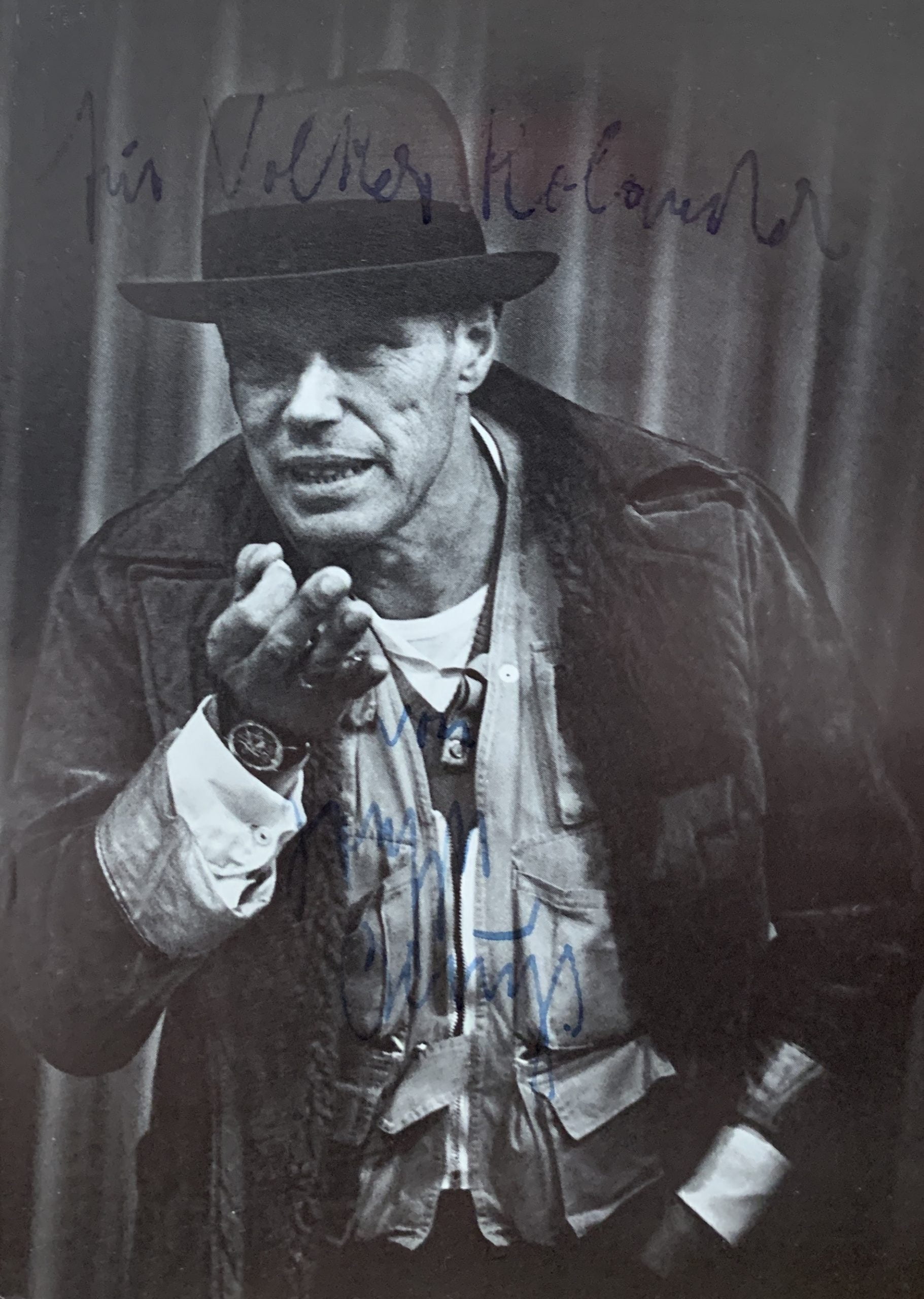 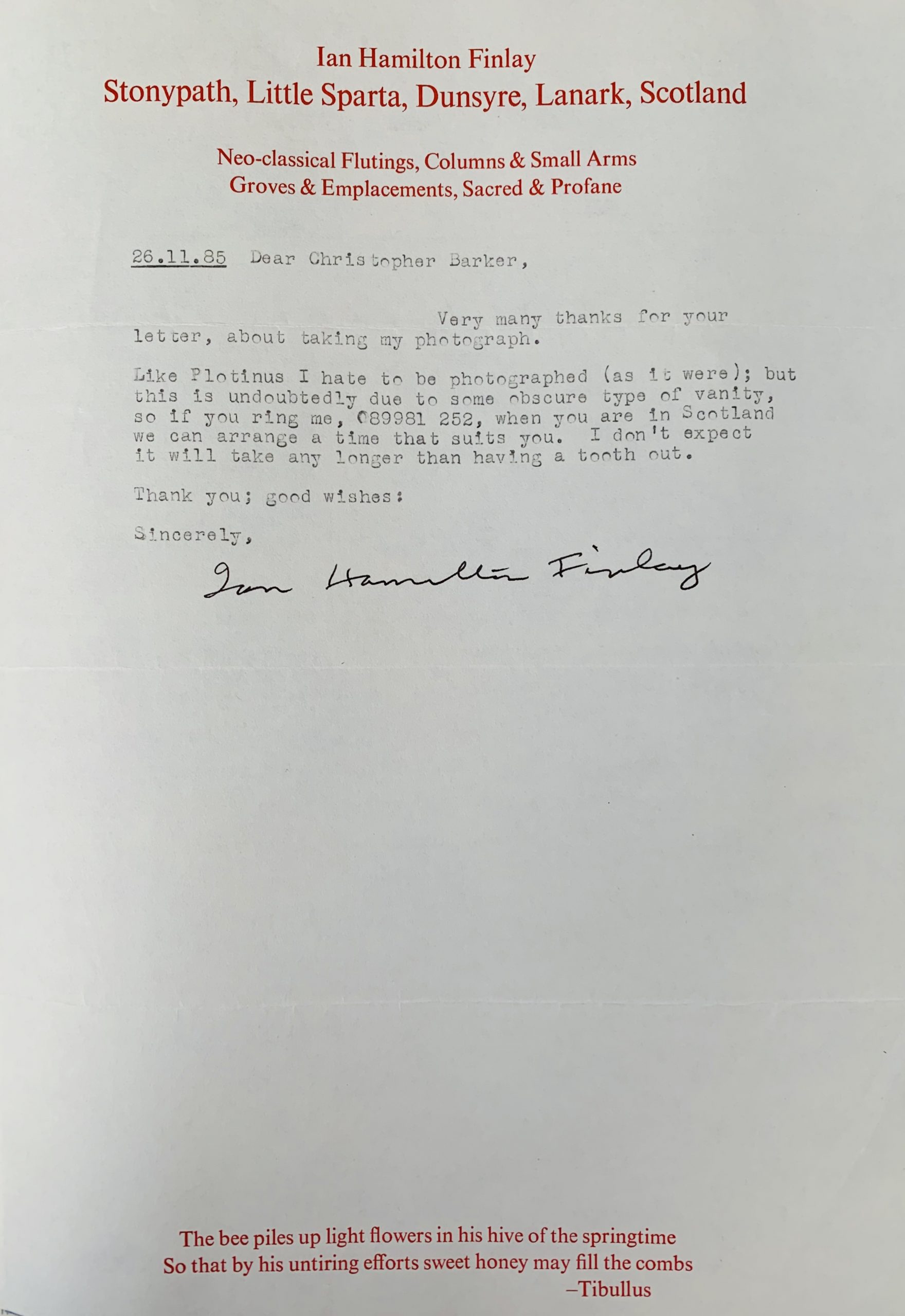 26 Nov ORIGINAL SIGNED TYPED LETTER TO CHRISTOPHER BARKER ON STATIONERY IN REPLY TO A LETTER REQUESTING A PHOTOGRAPHIC SESSION. 1985.

30 x 21cm, hand typed letter on printed letterhead paper.
A letter sent by Finlay to Christopher Barker dated 26.11.85
The letter agrees to the poet's photograph to be taken by Barker for a book in response to the latter's letter (see below) asking for a session. Finlay as ever is funny - he claims that "Like Plotinus I hate to be photographed" and that "I don't expect it will take any longer than having a tooth pulled."
Signed in full in black ink by Finlay at the end.

JOINT WITH:
Original typed letter (unsigned) from Christopher Barker to Finlay dated 6.11.85 requesting to be allowed to visit Little Sparta and so to include Finlay in a book of photographs of British poets planned for publication and asking for one poem to also be included in the book. Blue printed stationery. 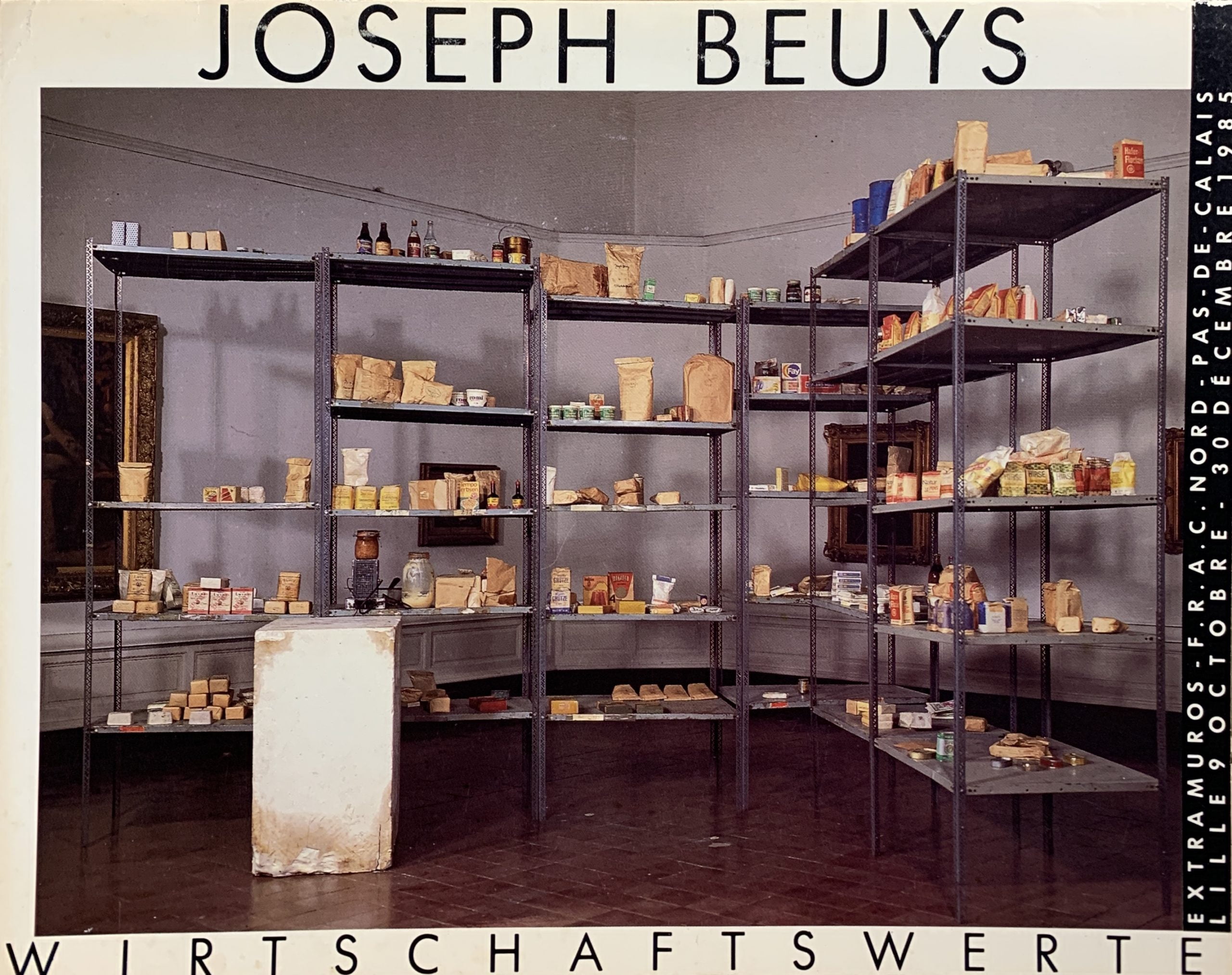 Lille: Extrsamuros, 1985
21 x30cm, 4pp large format announcement card where Beuys' Economic Value works were shown as an installation. The front of the card shows the various items on racking, internally there is an essay by Denis-Laurent Bouyer "Valeurs Economiques, Valeurs de l'art". VG+.