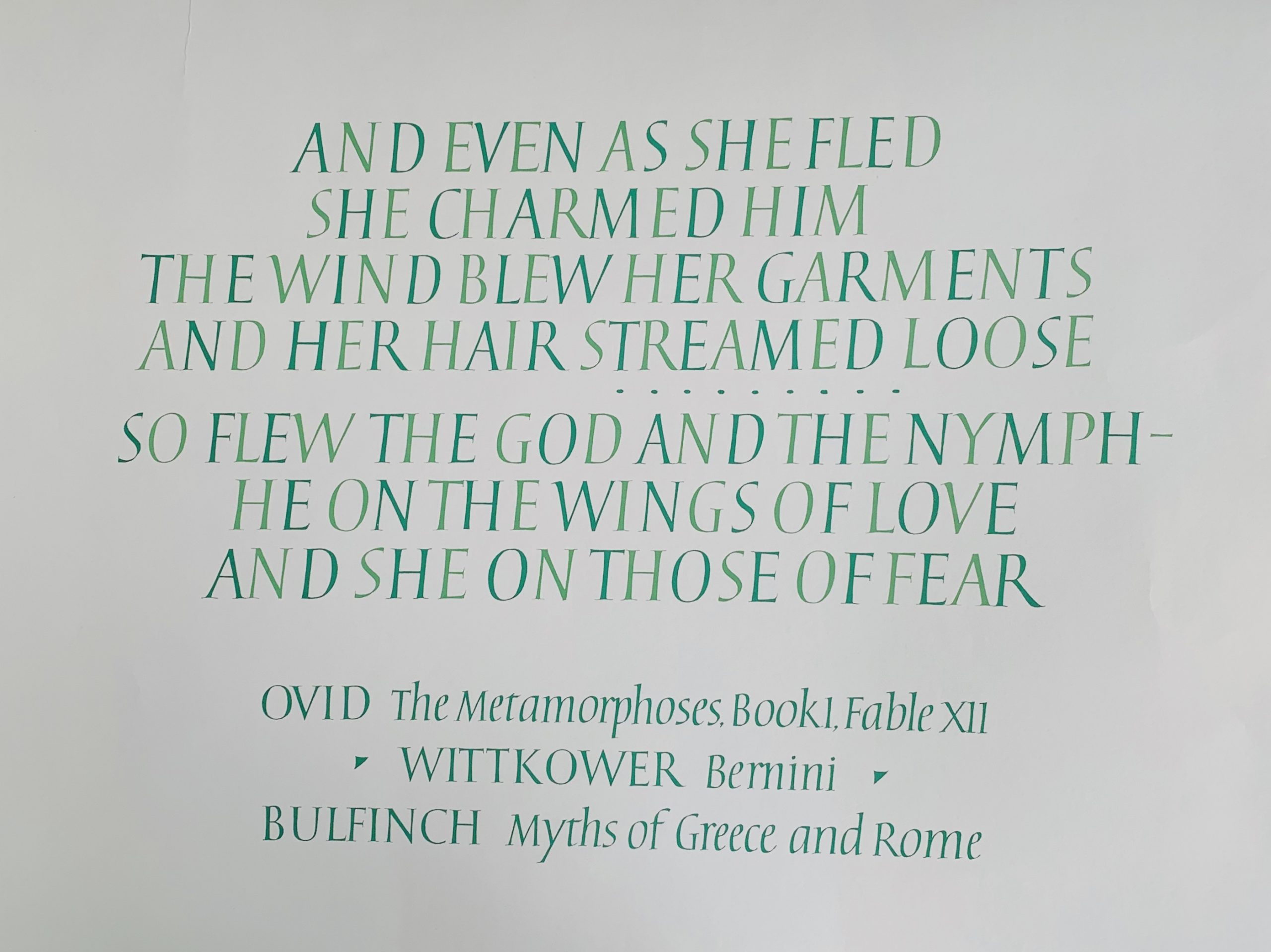 Dunsyre: Wild Hawthorn Press, 1976
43.2 x 55.8cm offset lithograph in green on white paper. Typography by John R. Nash. The "quotation" is from Ovid's Metamorphoses an epic poem of mythology. Here the quotation is from the story of Apollo and Daphne - the duo forced by Eros to be in emotional conflict with Daphne eventually being saved from ravishment by her father the river god turning her into a tree. This is the first of two linked works with the original quotation from Ovid unaltered from the translation - the other paired work has the text refer to Saint-Juste as "Apollo and "Daphne" becomes the spirit of the French revolution. VG+. 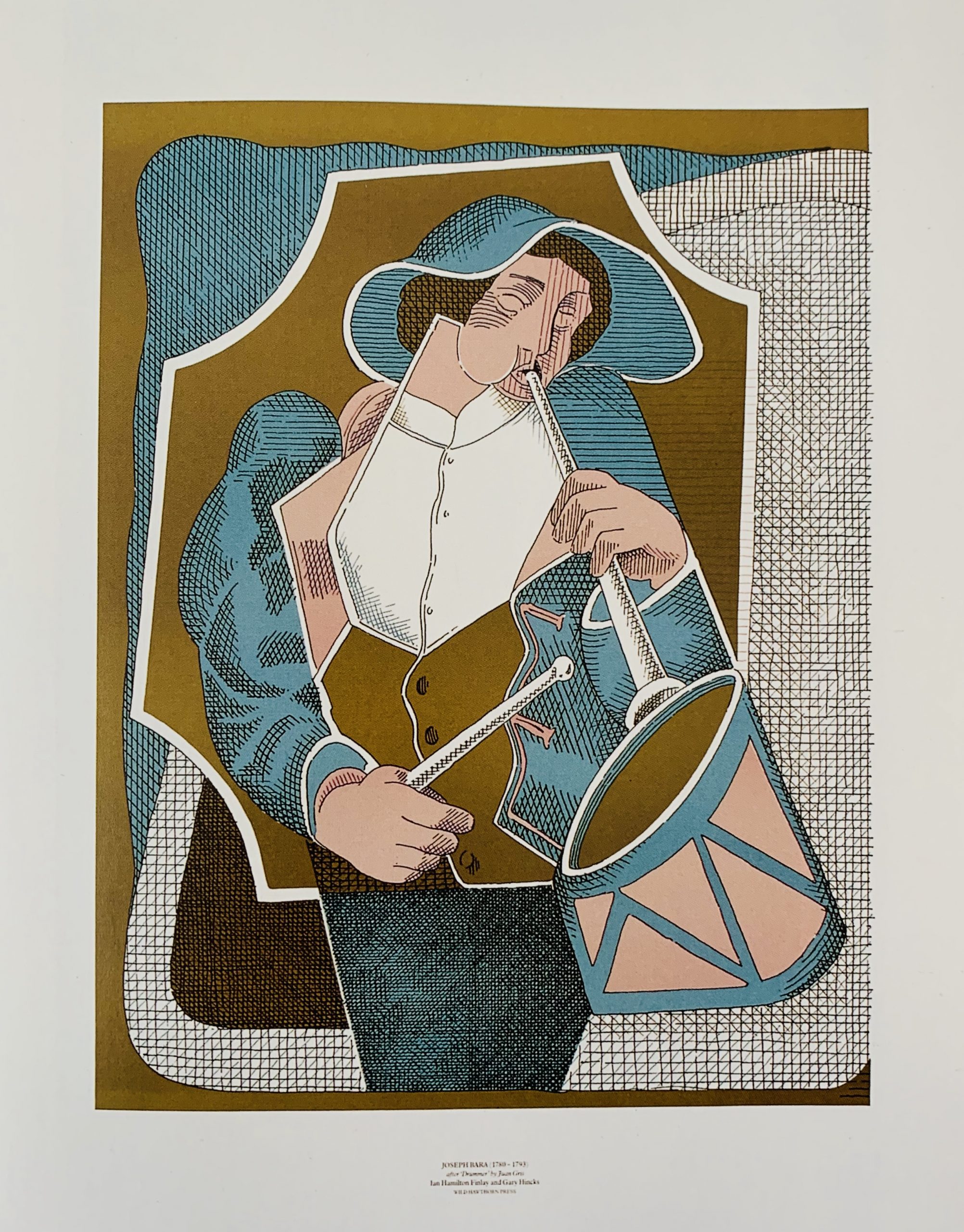 Little Sparta: Wild Hawthorn Press, 1987
77.0 x 62.5cm, full colour offset lithograph on paper. The reproduced painting by Hincks is based on a 1925 cubist painting by Juan Gris called Drummer. In place of Gris' adult, Finlay had Hincks turn the figure into the martyred "little drummer boy" Bara who died in the revolutionary war against the reactionary uprising in the Vendee. Here Hinck's recreation of the work is lighter and more classical in touch - even more heroic.
The image we have used here is from a publication - the print we hold is framed in wood and glass and hard to image without reflections - but the work is in VG+ condition. 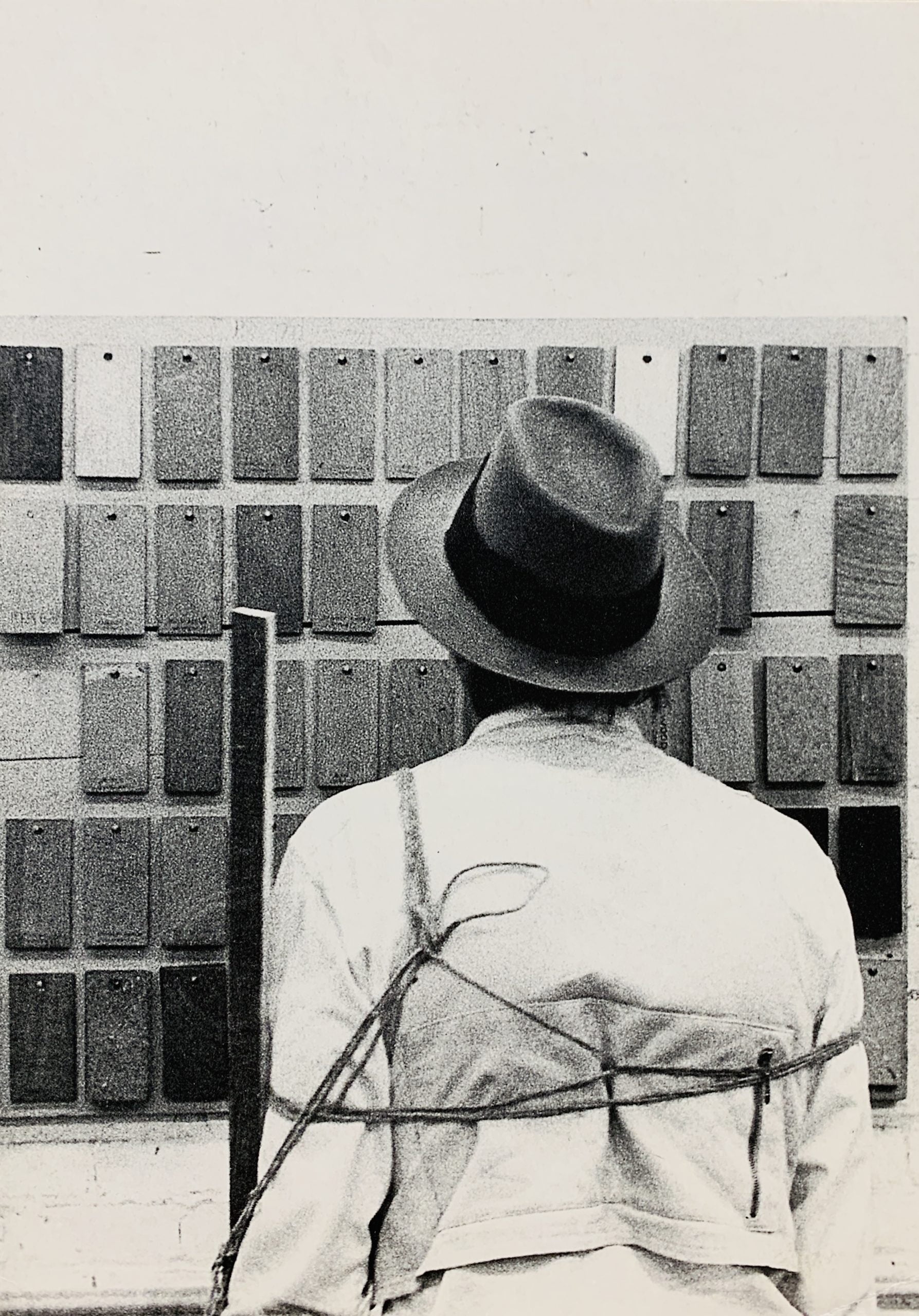 Kleve: Stadtisches Museum Haus Koekkoek, 1987
21 x 15cm, 4pp announcement for a posthumous show to honour the recently deceased artists with work from 199 other artists. There is a b/w photographic portrait of Beuys taken from behind him on the front of the card.. VG+. 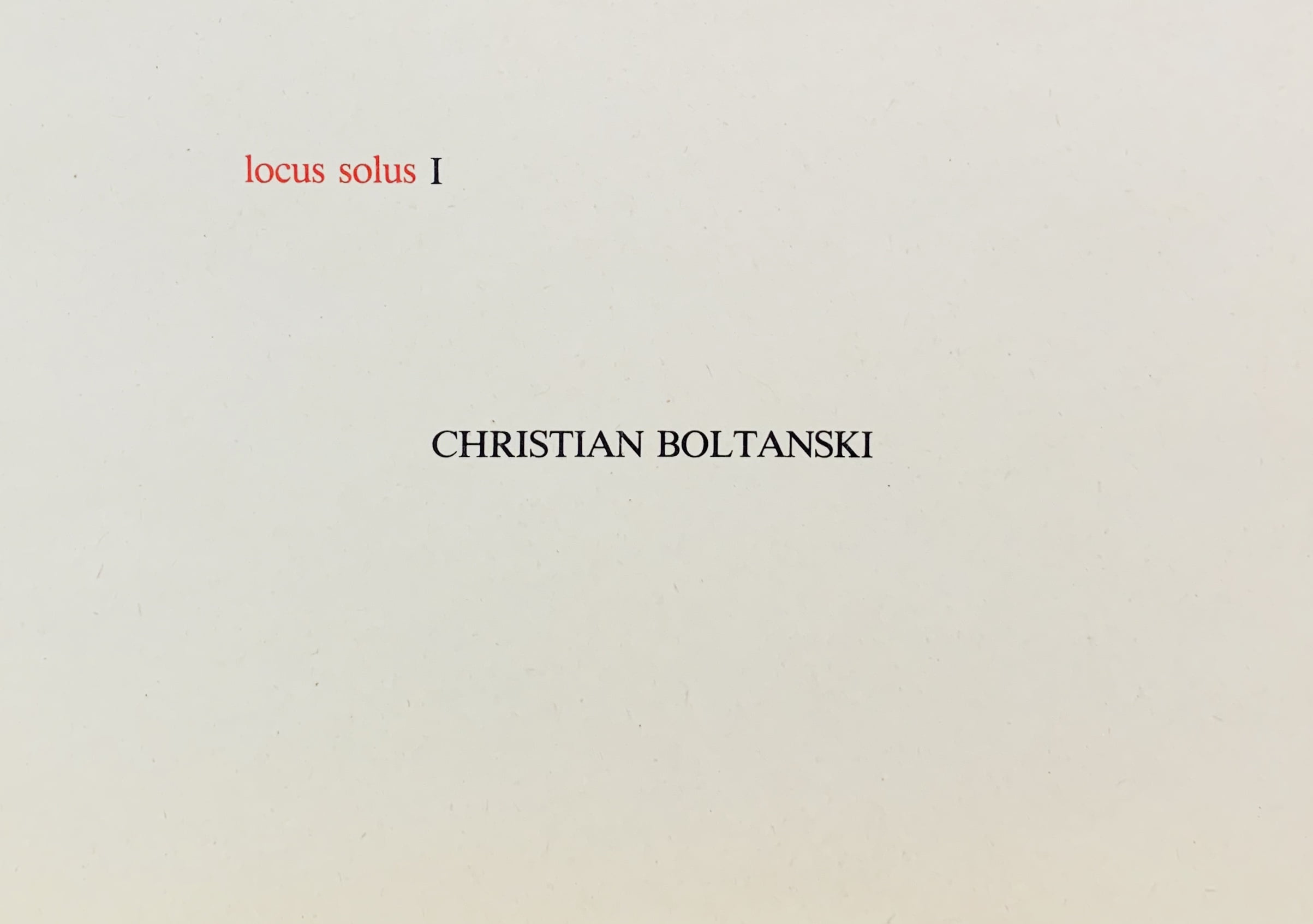 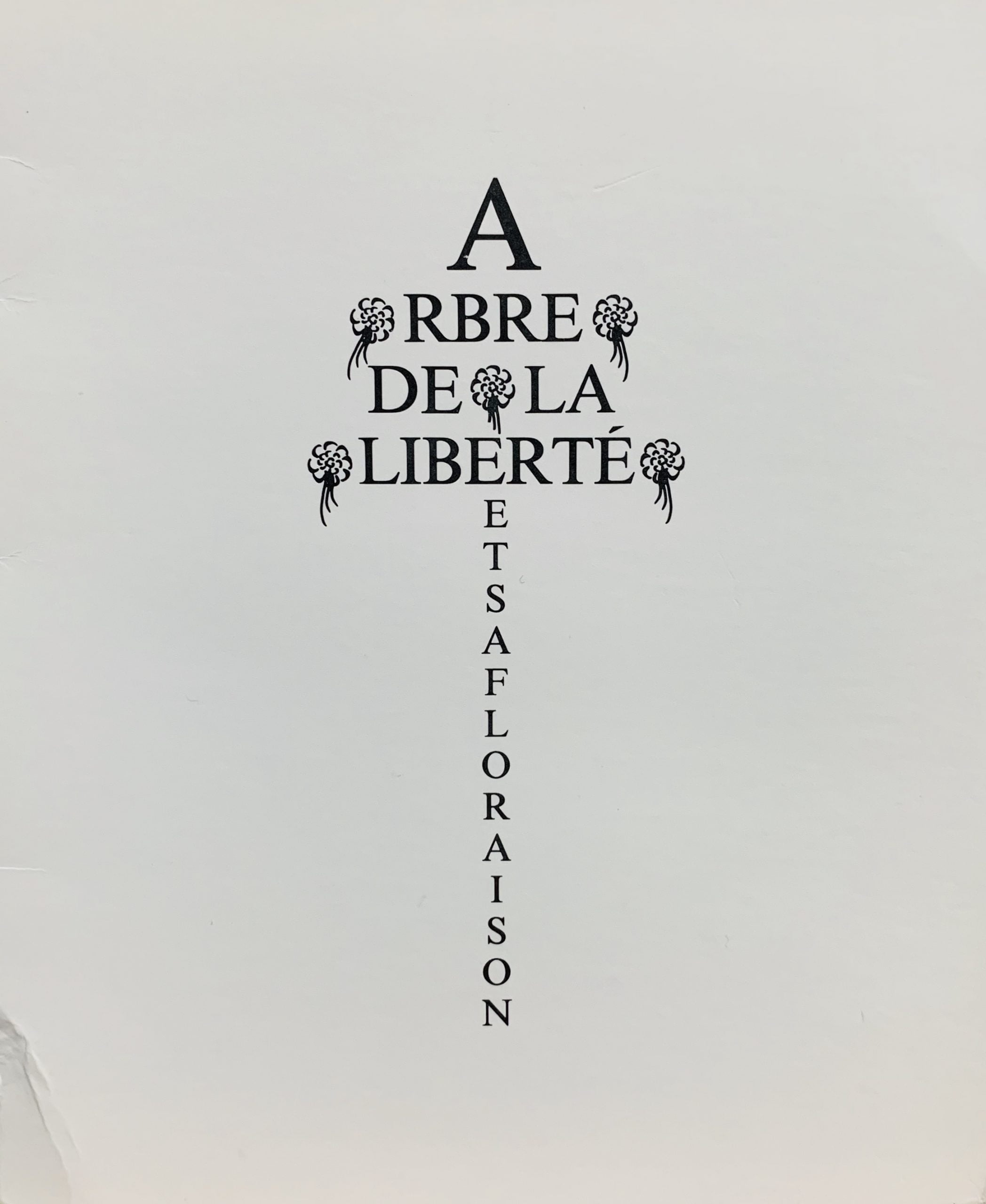 Posted at 09:19h in Artist's Postcards

Little Sparta: Wild Hawthorn Press, 1987
164.2 x 12cm,4pp artist's card with a concrete poem where the text "Arbre de la liberte et sa floraison" is shaped to look like a tree. A liberty tree was often planted in France (and the USA before then) as a symbol of the nation's desire for freedom.
Slight crease top left else VG=. 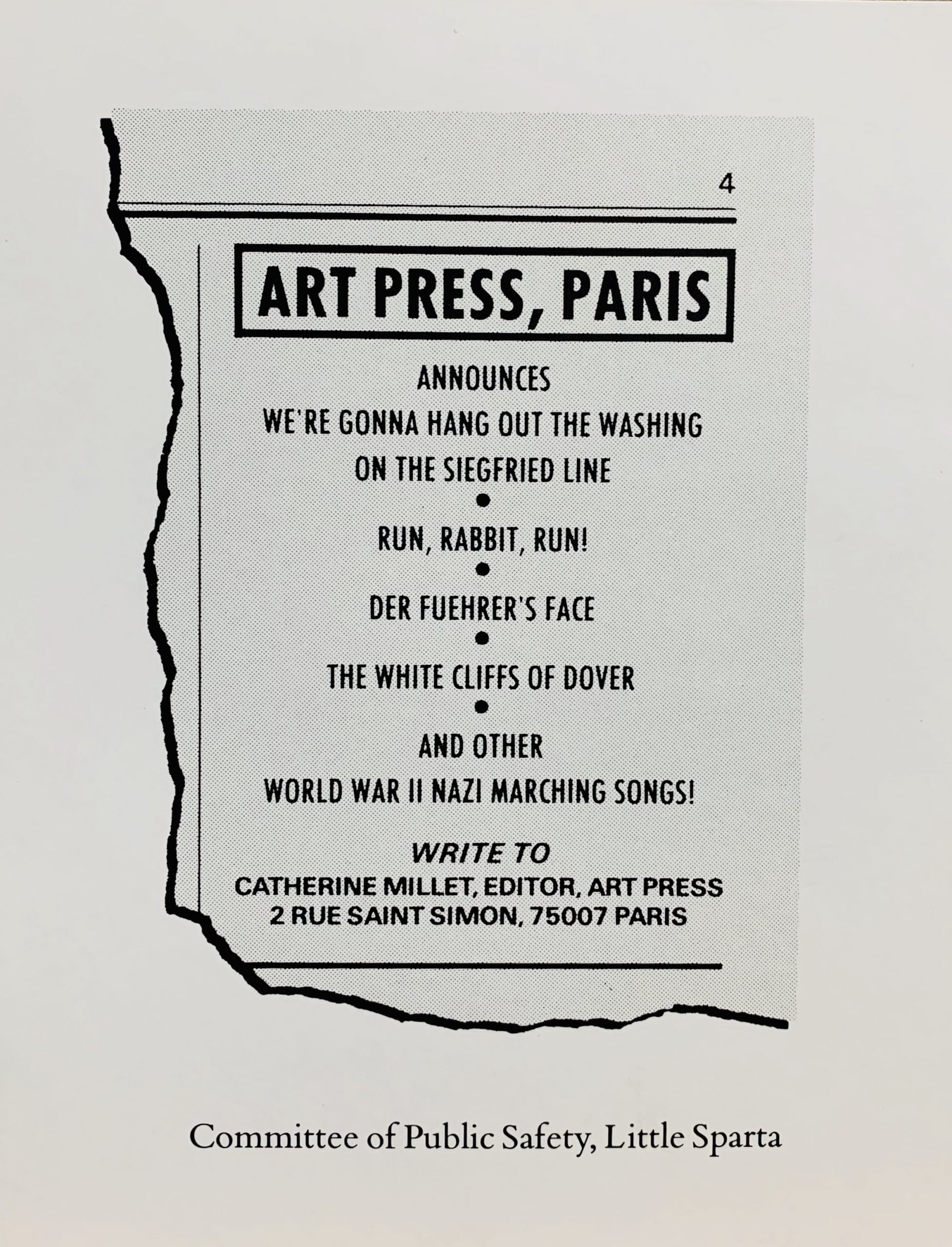 Posted at 09:10h in Artist's Postcards

Little Sparta: Wild Hawthorn Press, 1987
16.7 x 13.1cm, 1pp artist's card with a parody of an advertisement for the publication edited by Catherine Millet. The faux advert includes a list of song titles from the war such as "We're gonna hang out the washing on the Siegfried Line" and "The White Cliffs of Dover" - and "other World War II Nazi marching songs".
Millet had attacked Finlay because she had seen a jokey reference on a house washing line at Little Sparta which was labelled "Siegfried Line" and claimed this as proof of Nazi sympathies.
This, of course, to any British person is absurd as the songs were jokey attacks on Hitler sung by troops and civilians during the war - Millet seems not to have known that and as a result made a completely ignorant point. One of the more witty attacks on Millet by Finlay. VG+. 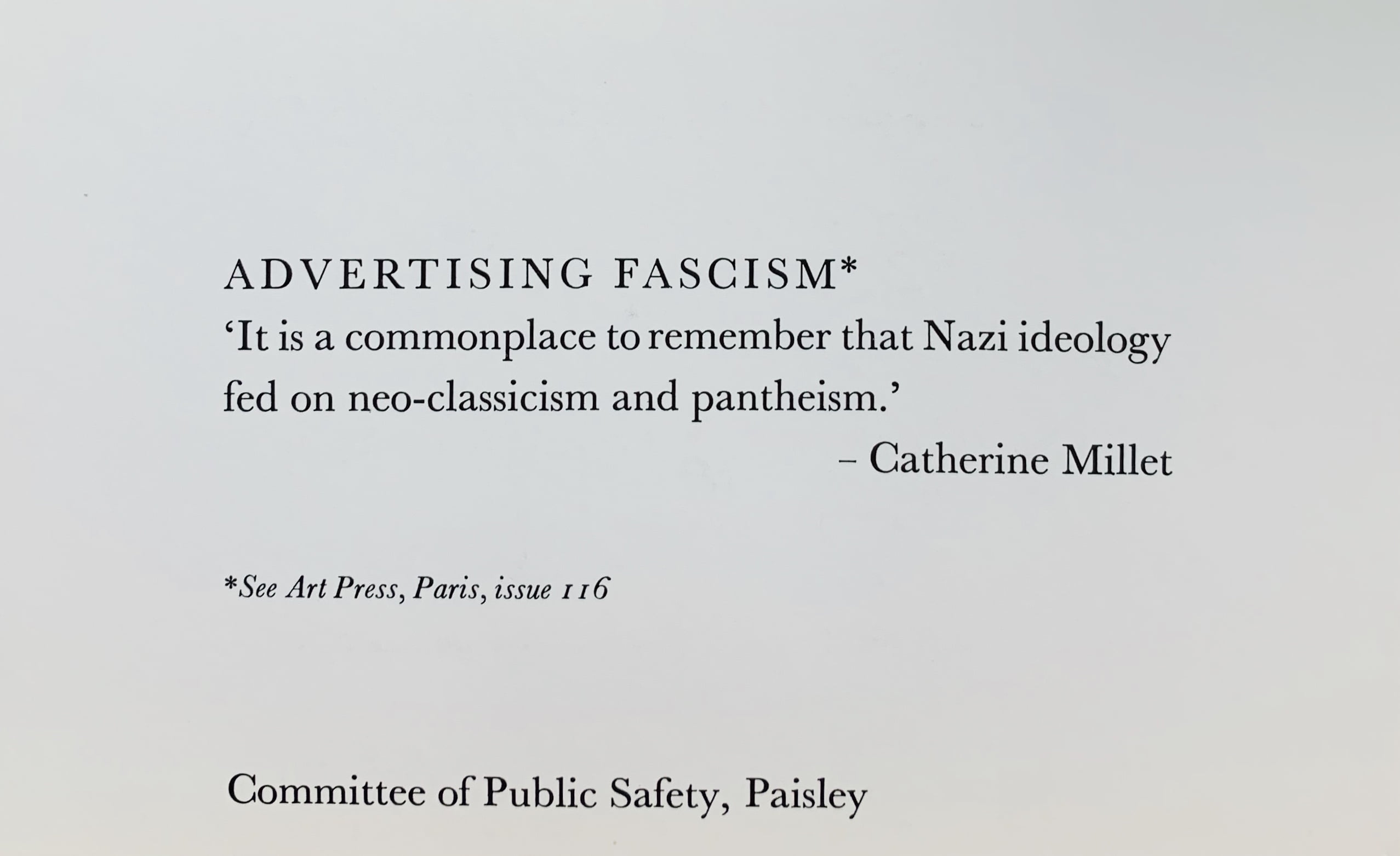 Posted at 09:04h in Artist's Postcards

Little Sparta: Wild Hawthorn Press, 1987
9.6 x 15.2cm, 1pp artist's card which quoted Catherine Millet: "It is a commonplace to remember that Nazi ideology fed on neo-classicism and pantheism." which of course may have a small amount of truth in it but is far from a reason to see a work of art that is classist and pantheist as fascist, Millet wrote some very stupid things but this was one of the most ridiculous. VG+. 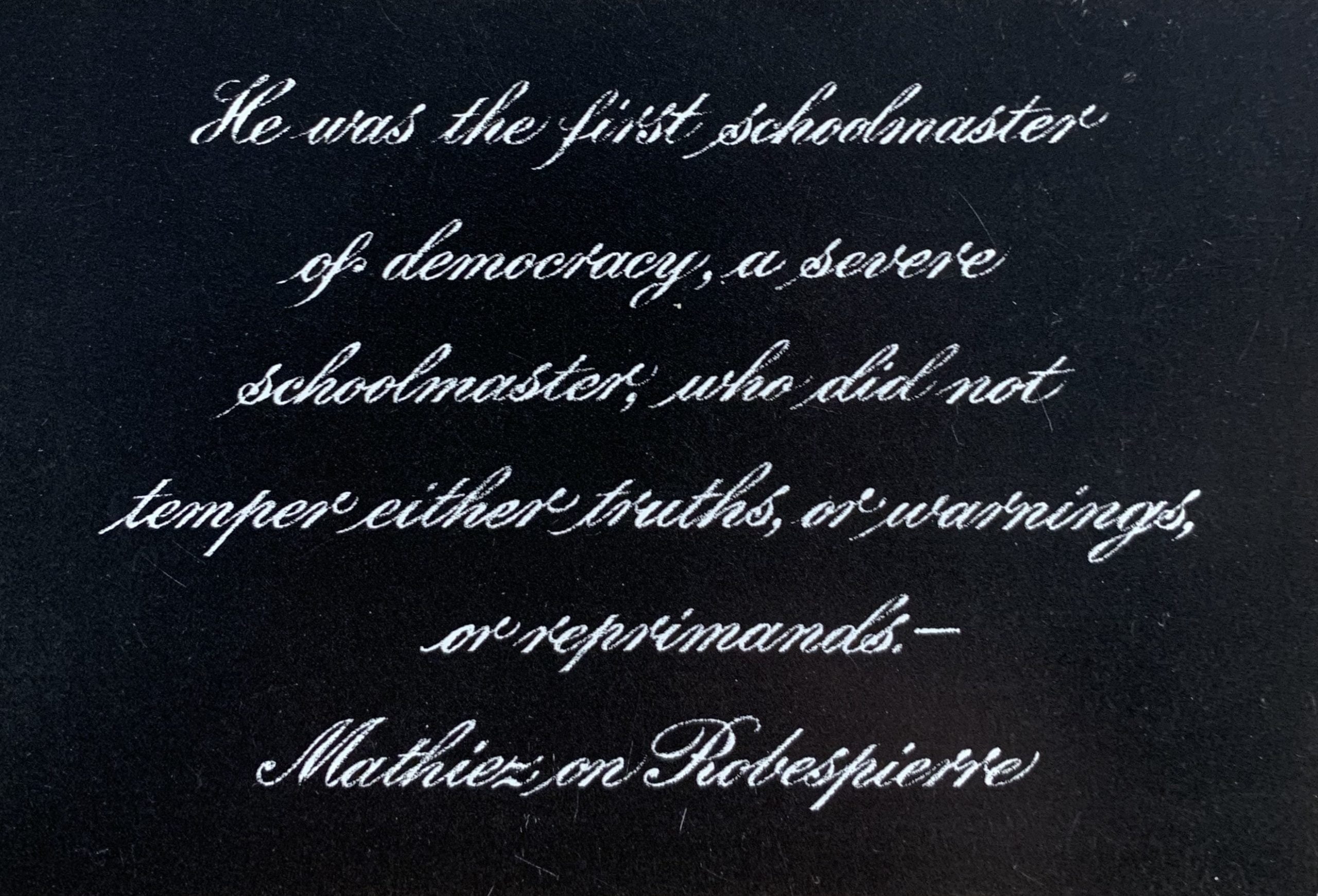 Posted at 07:31h in Artist's Postcards

Little Sparta: Wild Hawthorn Press, 1987
9.5 x 14cm, 2pp artist's card with text that uses a font similar to the look of chalk on a blackboard. The text reads "He was the first school master of democracy, a severe schoolmaster, who did not temper either truths or warnings or reprimands." -which is from the pro-revolutionary historian Albert Mathiez on Robespierre. Nonetheless Mathiez's description gives an idea of the authoritarianism of the Deputy for Arras. it is fair to say Finlay admired Robespierre's dedication and purity of purpose seeing it as pious without agreeing with the associated murder that it gave rise to. VG+.

Posted at 06:38h in Artist's Postcards

Little Sparta: Wild Hawthorn Press, 1987
9.5 x 14cm, 2pp artist's card with text that uses a font similar to the look of chalk on a blackboard. The text suggests that Liberal Democracy needs some sort of leadership and means of promotion much like teacher has in a class. The card appeals for recruits to The Saint-Just Vigilantes. VG+. 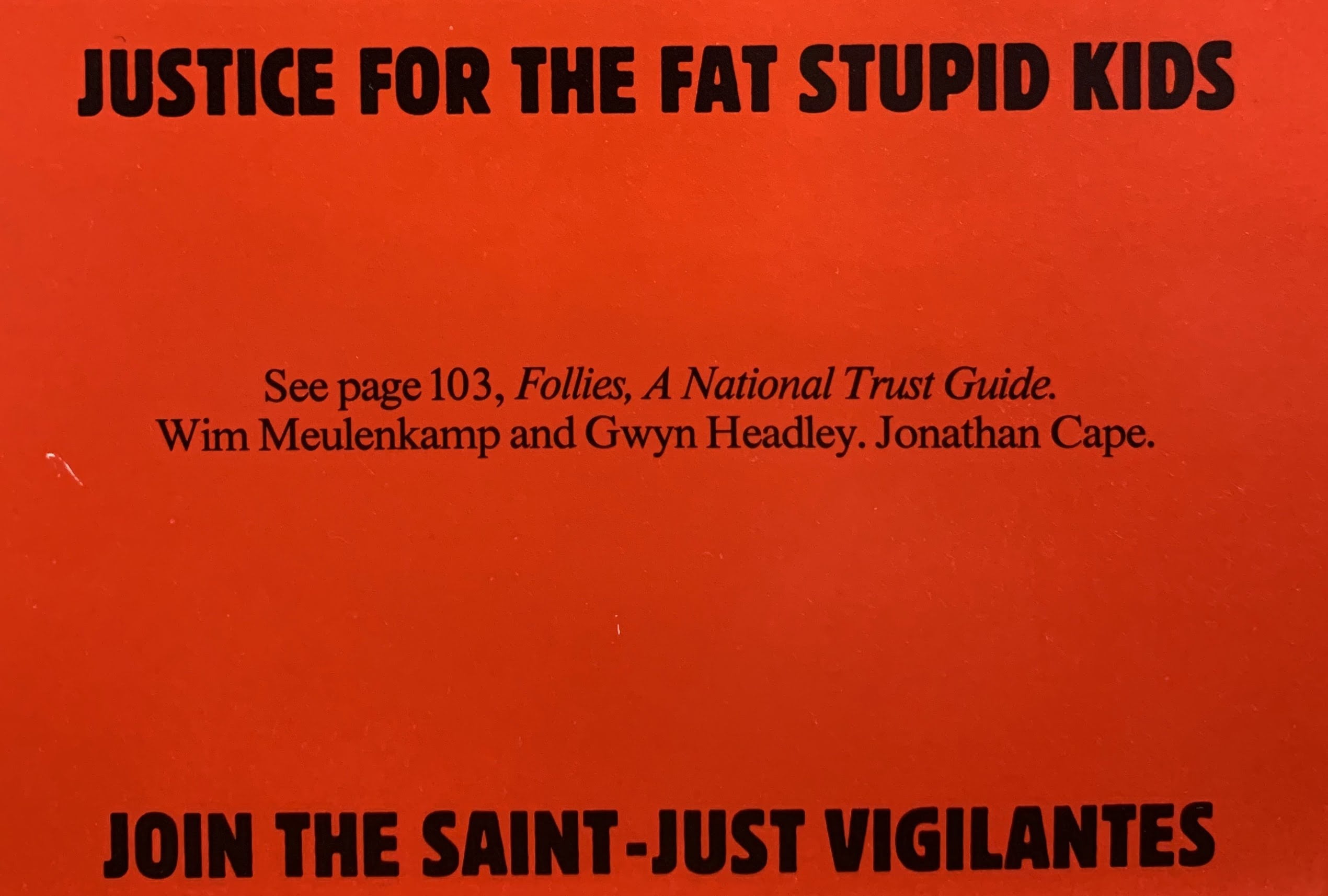 Posted at 05:55h in Artist's Postcards

Little Sparta: Wild Hawthorn Press, 1987 9.5 x 14cm, 1pp artist's card printed black on red - the text "JUSTICE FOR THE FAT STUPID KIDS" is referenced to a page of Follies. A National Trust Guide. We will return to this item once we can check the much disputed "guide" for the reference. VG+.
One the reverse of the card there is a small pink post-it note with the writing "Follies War card" in Finlay's own hand. 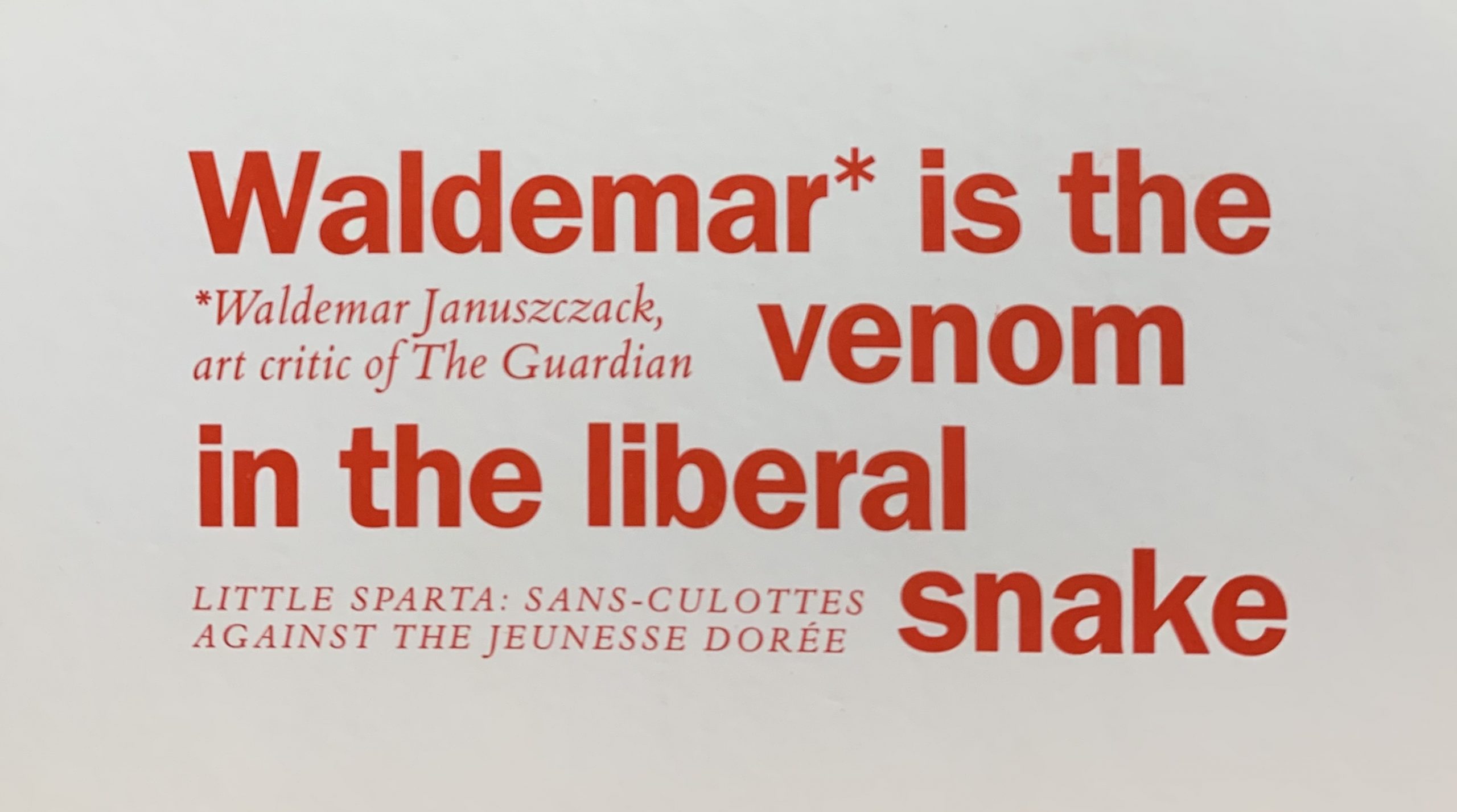 Posted at 05:10h in Artist's Postcards

Little Sparta: Wild Hawthorn Press, 1987 8 x 14cm, 1pp artist's card printed red on white - the text a very blatant attack on Waldemar Januszczack the art critic of the liberal Guardian. The sub title is "Sans cullottes against the Jeunesse doree" which is a proletarian dig at the middle class Januszczack. VG+. 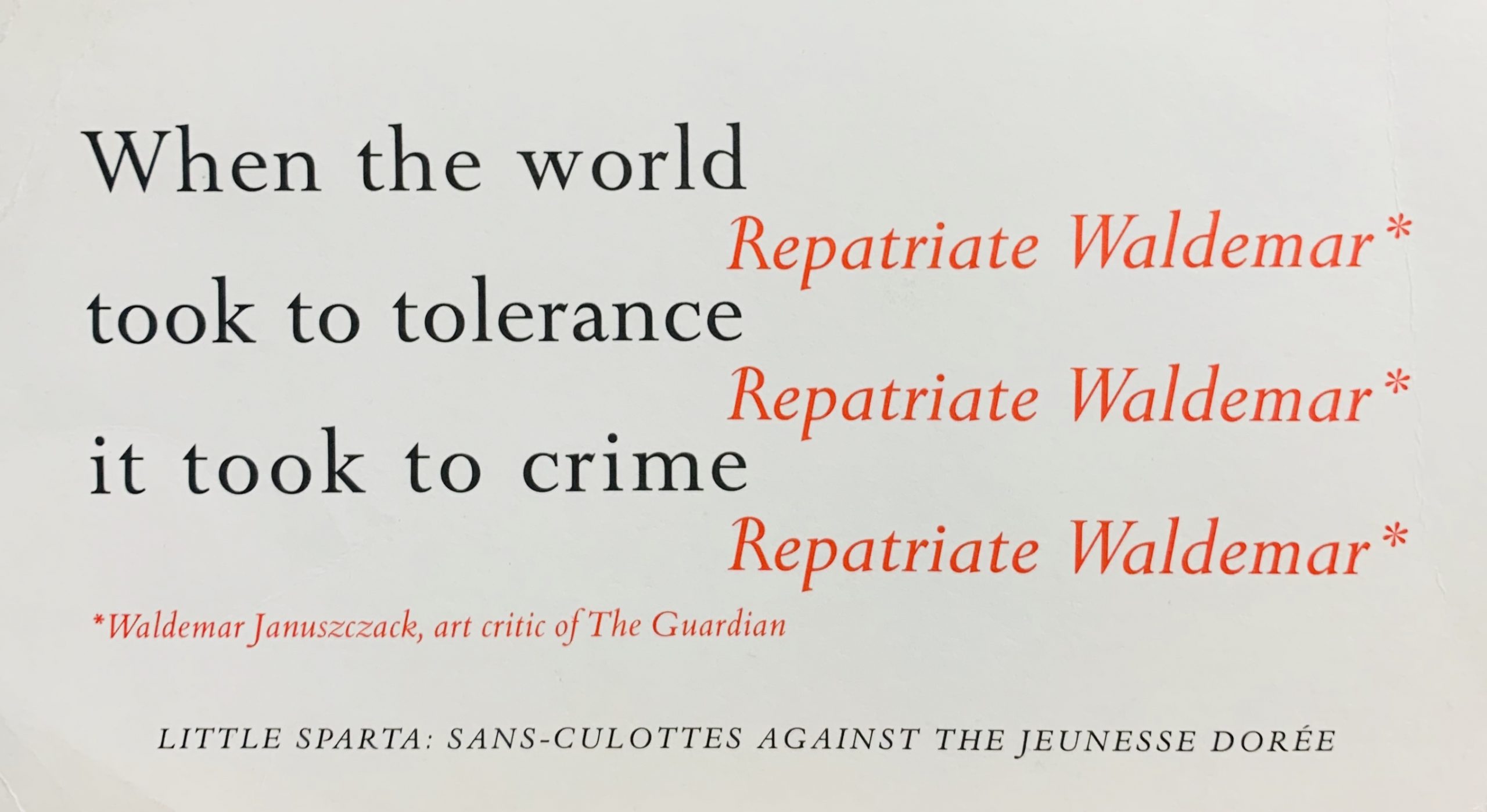 Posted at 04:15h in Artist's Postcards

Little Sparta: Wild Hawthorn Press, 1987 8.5 × 17.3cm, 1pp artist's card printed red and black on white - the text is probably the most contentious of all cards produced by Finlay where he three times calls to "Repatriate Waldemar" while knowing full well that the critic of Polish heritage was born in Britain. The dominant text "When the world took to tolerance it took to crime" is a translation of the stone etched text in Piranesi's frontispiece to the Carceri (The Prisons) a set of etchings depicting fictitious massive subterranean prisons.
Waldemar Januszczack was the art critic of The Guardian and had attracted Finlay's unhappiness after a particularly scathing review. The sub title of this card (and others) is "Little Sparta: Sans cullottes against the Jeunesse doree" which is a neat proletarian dig at the middle class Januszczack.
It is fair to say Finlay could be too extreme in his responses to attacks and this period of the late 80s was a time when he felt particularly under siege and had some mental health issues relating to a form of claustrophobia where he could not leave his farm. Most of his attacks are acceptable if extremely biting but this card would have been better left unprinted.
This example is hand addressed by Finlay on the reverse to Claire Burns in Paris. A mailed example but still VG+.