Born in 1944 in Paris immediately after the war of a Catholic mother and a father who had converted from a Jewish heritage, Christian Boltanski has become the greatest living French artist.

Beginning his career as a gallerist in 1967 he soon took over the programming of what was originally his mother’s gallery and made it a centre of early Parisian avant grade activity working with Sarkis, Jean Le Gac, Juan Romero and Annette Messager (who became his partner soon after their first meeting). Boltanski then began to exhibit as an artist himself (having always made “art” or rather primitive sculptures in the privacy of his own room) and found success very early on. His first exhibition was in the Cinéma Le Ranelagh Paris in 1968 but by 1970 he was showing in the ARC, Musee d’Art Modern de la Ville de Paris. There after he has had many international shows and is a major international art figure of major influence.

Much of Boltanski’s earliest work consisted of hand made sculptures – large numbers of roughly made knives and weapons, many many attempts at making perfect mud spheres, heaps of mud in conical shapes, human sized puppets with masks for faces but from 1968 he also made artist’s books, films and took photographs of staged performances.

An early text in his first artist’s book (ON NE REMARQUERA… 1969 – see listing) discusses his desire to create and recreate history by archiving his and other’s life but accepting the flaws caused by the failure of memory: this was a constant theme in his work from early on. It can be seen in Boltanski’s mail art and books where the images of his past life are shown but deliberately utilising other people pretending to be him or even himself pretending to be much younger. Several gatherings of all the belongings of an anonymous person shown in museum settings are also the culmination of Boltanski’s fascination with documentation but again the images shown are unreliable (the ownership not being what they claimed to be). Some commenters initially labelled this sort of work “fictionalism” but the genre title has not really stuck.

A period of live comic performances and images from them followed in the late 70s and 80s – with Boltanski taking the role of a parent figure with a ventriloquist’s dummy representing himself as a child.

Later installations were often photographic in content – daily life such as meals shown in garish detail – but also images of shadow plays and models in close up – representations of real life but still clearly fake.

Today Boltanski is still very active and his interest in his father’s lapsed faith has become important to him although he claims not to be religious. The massacre of the Jewish people by the German Nazis has become a major area of investigation – Boltanski appears to be fascinated by the lack of evidence in some photography of the essence of the subject: murder and victim are not discernible in uncaptioned images, close ups of children’s faces do not tell you about their later fate, Nazis are shown as human beings with no evidence of guilt being apparent in the vintage documentation that the artist choses to show us. Life is like death – it is neutral – it is only society that places labels on actions.

The huge installations of rusty boxes and blurred enlarged faces of the 90s again indicate the artist’s interest in memorials even if the boxes are empty and the faces unknown. This is a life’s work considering the morality of humans, their failings and their inability to change – but the artist’s eye is sometimes cold and merely a capturing of a moment without detailed evidence.

This collection was begun in 2005 by Paul Robertson and has grown to many unique works, rare object multiples, artists books (including many not known in the literature), posters, prints, records and varied ephemera, it is not for sale however under certain circumstances it may be available for exhibition. Please enquire. 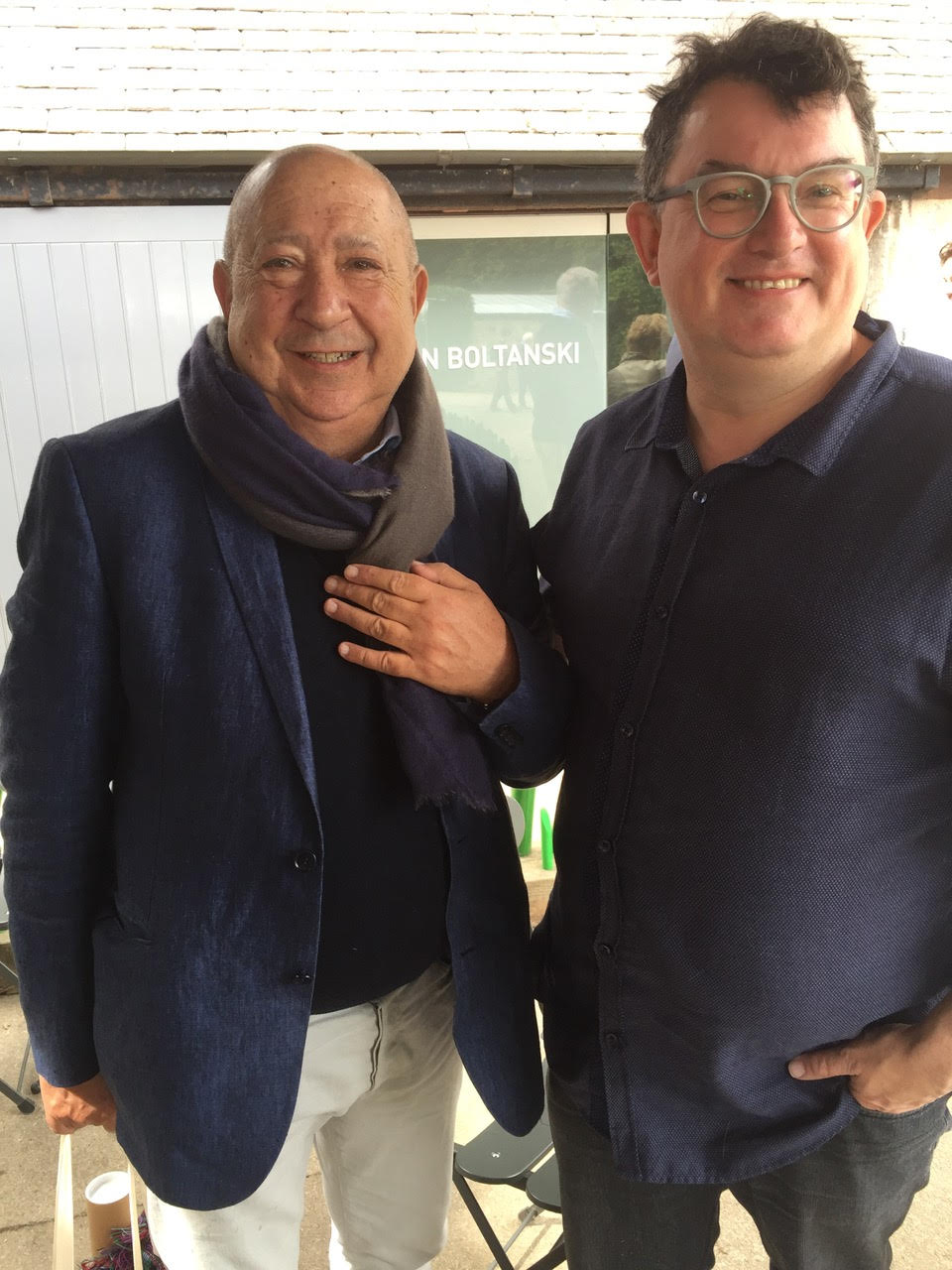 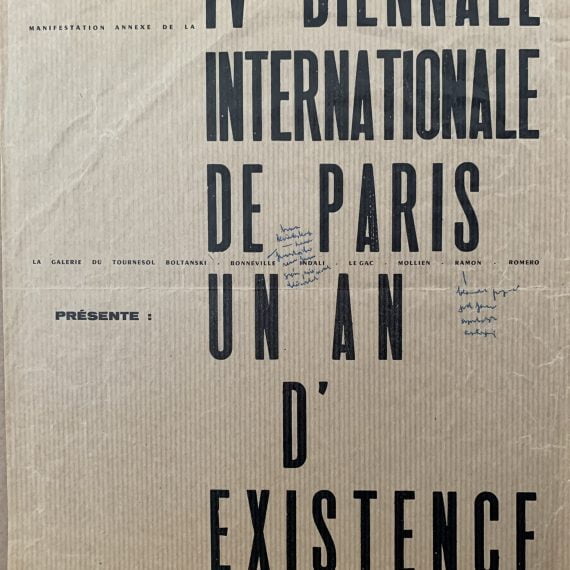 Paris: IV Biennale Internationale de Paris, n.d. (1965)
30.5 x 23.5cm, 1pp printed black on brown manilla paper. The small typographic poster for the Galerie du Tournesol's "annexe" for the Festival with Boltanski, Bonnevill, Indali, Le Gac, Mollien, Ramon and Romero noted as being included. The poster has blue ink handwritten annotations by Boltanksi relating to Benneville and Ramon but these are very hard to read. One of the very first documents that show Boltanski as an artist not just the director of the gallery.
In The Possible Life of Christian Boltanski" 2007, Boltanski claims his first ever public artistic endeavour was the showing of a film "The Impossible Life of Christian Boltanski" at the Ranelagh Cinema jn May 1968 (coincidentally the month and year of the student -worker revolts in Paris) but this poster suggests otherwise with Boltanski's name as one of the artists exhibiting at the Galerie du Tournesol. What was shown is not known but it is unlikely that Boltanski included his own name without showing something.
Extremely rare documentation in VG+ annotated condition. 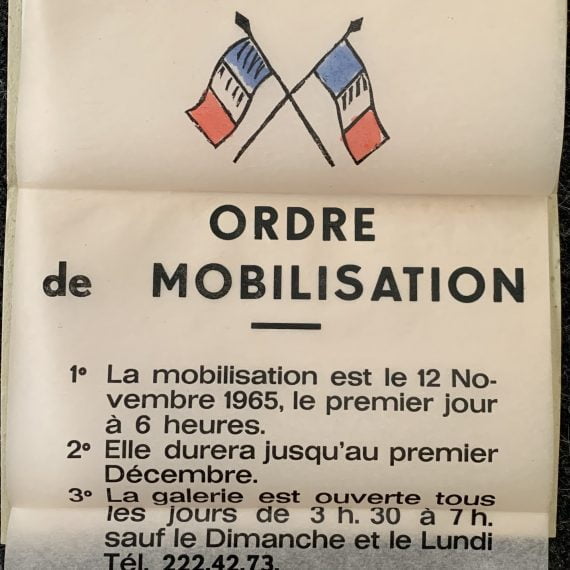 Paris: Ramon Gallery du Tournesol, 1965 21 x 13.4cm, outer folder with stapled in 4pp title page and a 6pp fold out "Ordre de Mobilisation" designed by the artist. Exhibition catalogue at the gallery where Boltanski was the co-ordinator/curator. The back of the booklet reproduces a silkscreen portrait in white of the artist's grandfather when he was in the military and the front a letter from his to his wife dated 26 December 1914.
VG+. Very scarce. 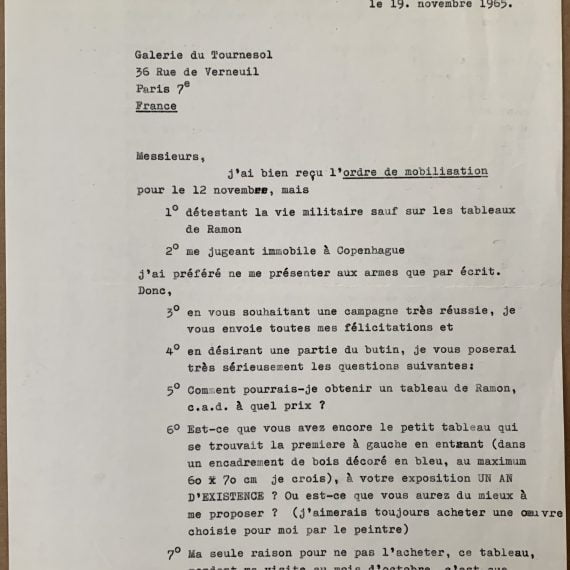 Copenhague:Berg, 19 Novembre 1965
21 x 14.8cm, 4pp (but only one side is utilised). Original carbon copy of a typed and signed letter from M Berg noting he received the Ramon painting and that he has sent a cheque for 600fr. He asks for some photographs of works by Ramero before his visit to Paris. 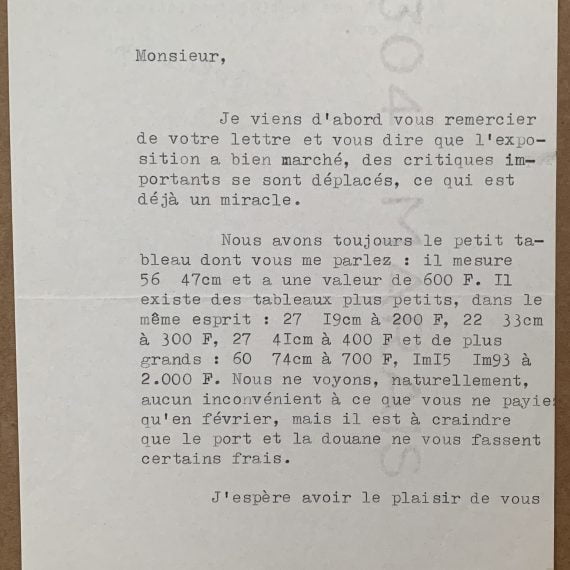 Paris: Galerie Tournesol, 1965
21 x 13.5cm, 2pp hand typed letter from Boltanski on Galerie du Tournesol letterhead paper to M. Berg replying to the latter's letter of 19 Nov 1965, discussing a painting that Berg was interested in buying. Boltanski claims in "the Possible Life of Christian Boltanski" that his father told his mother they had better open a gallery together to allow their son to learn how to be an artist. The Gallery sold only Jiddish art but clearly Boltanski's interest in the avant garde made the chosen artists a little more radical. The motivation for starting the gallery is probably not true (like many of Boltanski's tales it is more than likely deliberately false) but he ran the venture from 1965 until 1968. 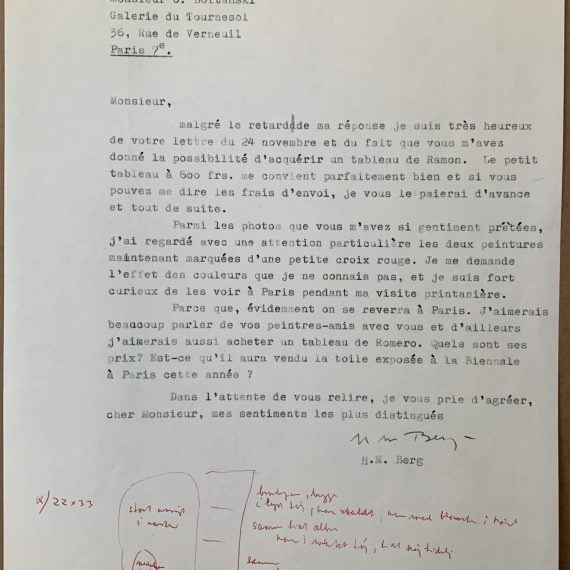 Copenhague: Berg, 9 Decembre 1965
30 x 21cm, 2pp. Original carbon copy of a typed and signed letter from M Berg indicating he was interested in acquiring one of the paintings by Ramon however the images sent by Boltanski do not show the colours. He also notes he is coming to Paris and will meet Boltanski and look at works in person including a painting by Romero.
This letter has some notes in red ink. 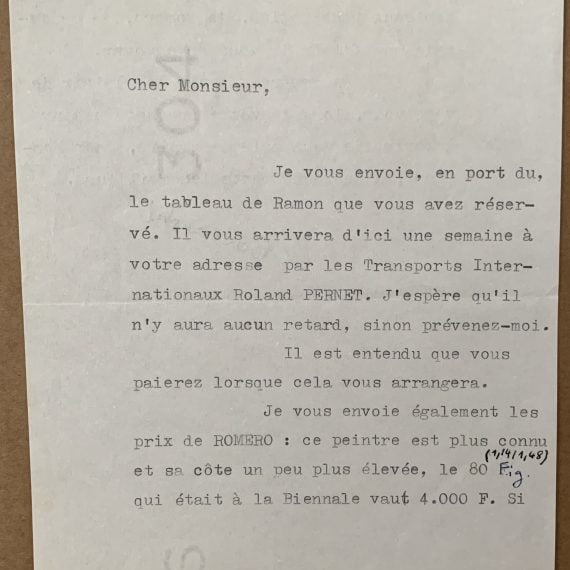 Paris: Galerie Tournesol, 1965
21 x 13.5cm, 2pp hand typed letter from Boltanski on Galerie du Tournesol letterhead paper to M. Berg explaining that the painting purchased by Berg has been sent to him and details on payment. Boltanski also says how much he is looking forward to meeting Berg in the new year. 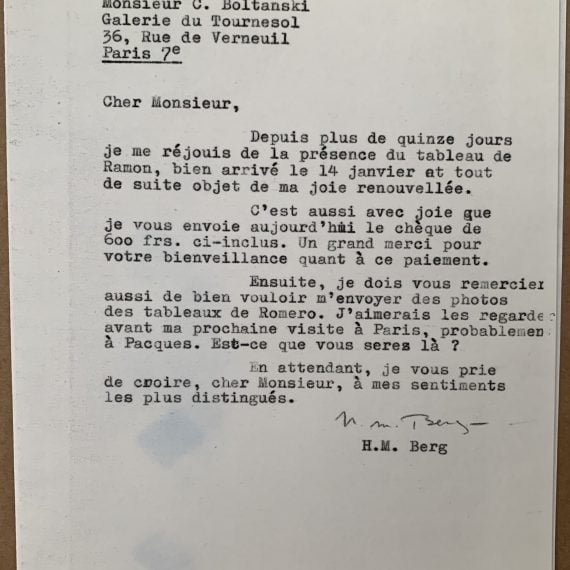 CARBON COPY OF LETTER FROM M. BERG TO BOLTANSKI. 2 FEBRUARY 1966.

Copenhague: Berg, 2 Fevrier 1966
21 x 15cm, 4pp but only one side with text. Original carbon copy of a typed and signed letter from M Berg noting that the painting had successfully arrived and including a cheque for 600 FR. Berg also asks for photographs of paintings by Romero in advance of visiting Paris in person. 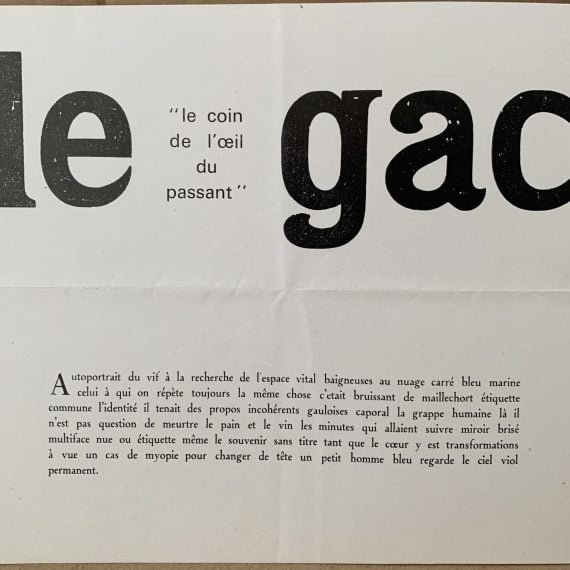 Paris: Gallery du Tournesol, 1966
8 x 18cm, 12pp (but opens out to 16 x 54cm, printed recto only). Announcement leaflet for a very early Jean Le Gac show at Boltanski's gallery where he showed mostly paintings. VG+. Very scarce.
JOINT WITH:
15 x 21cm, 2pp hand written note and diagrams which appears to have notes about the installation of the show by Boltanski. 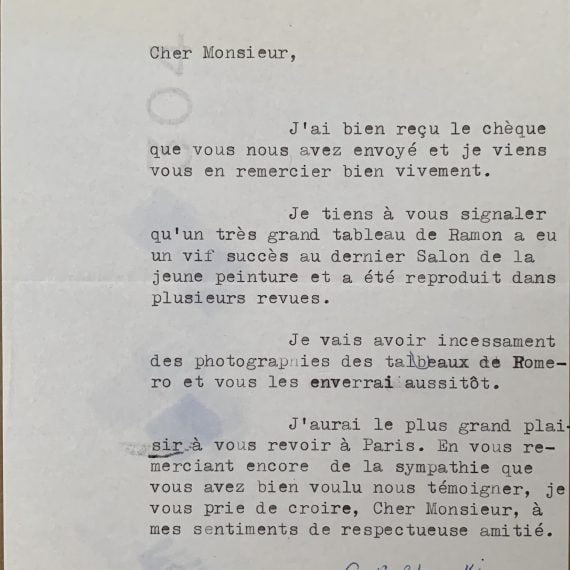 Paris: Galerie Tournesol, 22 Fevrier 1966
21 x 13.5cm, 1pp hand typed letter from Boltanski on Galerie du Tournesol letterhead paper to M. Berg noting he had sent photographs of works by Romero and noting that he (Boltanski) would not be in Paris in March and hoping that was not when the collector was coming to the city. 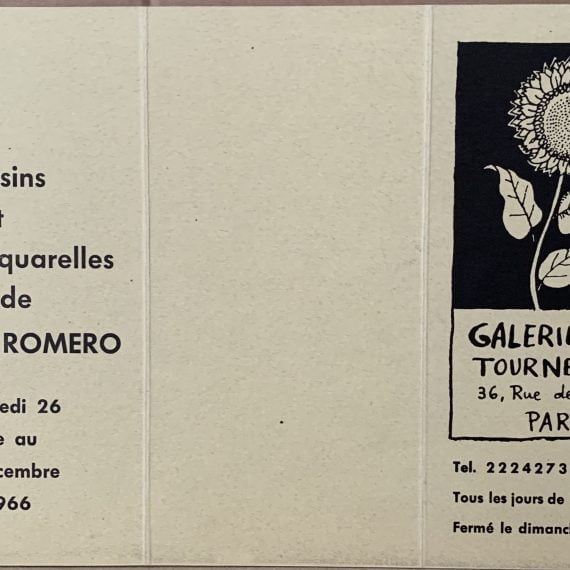 Paris: Gallery du Tournesol November 1966
17 x 8cm, 6pp. Announcement card printed black on beige with a detailed reproduced drawing by Romero over the inner pages. The gallery logo of a sunflower is on the front of the card - and there is a possibility that that drawing was by Boltanski. VG+. Rare. 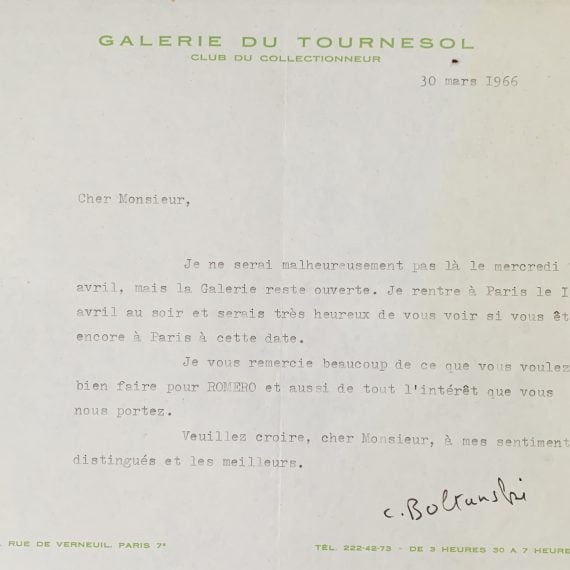 Paris: Galerie Tournesol, 1966
18 x 21cm, 1pp hand typed letter from Boltanski on Galerie du Tournesol letterhead paper to M. Berg apologising that the gallery will be closed on 7th of April 1966 and that Boltanski will only return to Paris on the 13 April but he would be happy to meet Berg on any other date. He also mentions Berg's interest in the work of Romero. The letter is signed in black ink. VG+.