PRINZ EUGEN*
Her nouns were round, her verbs were straight and swift

The poem sees the battleship as a sentence - the actions of this war machine are immediate and once presumes deadly, it's shape and form more aesthetic.
One of Finlay's poems in a folder although the format could be seen as a card. VG+.

Little Sparta: Wild Hawthorn Press, 1995
16 x 11cm, 4pp orange outer folder with printed title. Internally a 16 x 11cm, 4pp sheet with two concrete poems both entitled THE INSCRIPTIONS but the first being for Carl Rakosi and the second for Harry Gilonis.
The former is an objectivist poet, the latter a friend of Finlay's and also a poet. The first form of the poem is duplicated in both but in the second Finlay has crossed out the original words, kept the physical structure but the classical names replaced by names of meaning to Gilonis. The echo here being the similarities in the two poems.
This is one of a series of works which the Wild Hawthorn Press denoted as "Poems in folders". VG+.

11.7 x 10.8cm, 4pp outer printed blue folder content of a 11.7 x 10.8cm, 4pp printed purple insert with a text poem by Finaly. The full title of the work is "AN EARLY PICASSO IN J.L. DAVID" below which is a text from revolutionary sources about how female citizens should dress for one of the major public festivals encouraged by the National Convention. The description is suggested by Finlay to be equivalent of a Picasso painting but 200 years beforehand.

Little Sparta: Wild Hawthorn Press, 1993
17.5 x 14.5cm, 4pp light green outer folder with printed title. Internally a 17.5 x 14.5cm, 4pp sheet with two concrete poems left and right
The left poem repeats the word oval as a central spine to the work with the words leaf blue song pink foal grey on both sides with the letters emboldened to create a rough oval of the letters (see photograph). The right hand poem has the same physical structure but the words leaf blue song pink foal grey become the central spine of the design and the word oval is repeated above, below and on both sides.
This is one of a series of works which the Wild Hawthorn Press denoted as "Poems in folders". VG+.

Finlay indicates how the distant hills act as means of orientating a traveller and the trees act as steps on the way in any rural journey. VG+.

Little Sparta: Wild Hawthorn Press, 1992
8.1 x 6.8cm, 4pp green outer folder with a drawing by Gary Hincks. Internally a 8.1 x 6.8cm, 4pp sheet with a text telling a tale of a discussion of "the moral effects of the arts and sciences" after stopping at an avenue of chestnut trees.
The text is in two parts - one taken from Thomas A. Clark and the other referring to an essay by Jean-Jacques Rousseau.
The title of the work refers to the attempted escape of the French king and queen while being held hostage during the first months of the French revolution - they were stopped on the way because a shop keeper recognised the King's striking (ie big nosed) visage from the coin of the realm and escorted back to the capital.
Together Finlay has created a new story of morals and escape from unthinking philosophies of behaviour.
This is one of a series of works which the Wild hawthorn Press denoted as "Poems in folders". VG+.

"The canoe
of life
is shattered.."

The suicide note referred to is from the Russian avant-garde poet Mayakovsky. The reference to the 'canoe of life is shattered" is a direct quote from his despairing final letter. Finlay brings attention to the shape of the willow leaves that have fallen (shattered by the wind) to the ground. The image on the front of the folder also shows that death of the leaves. 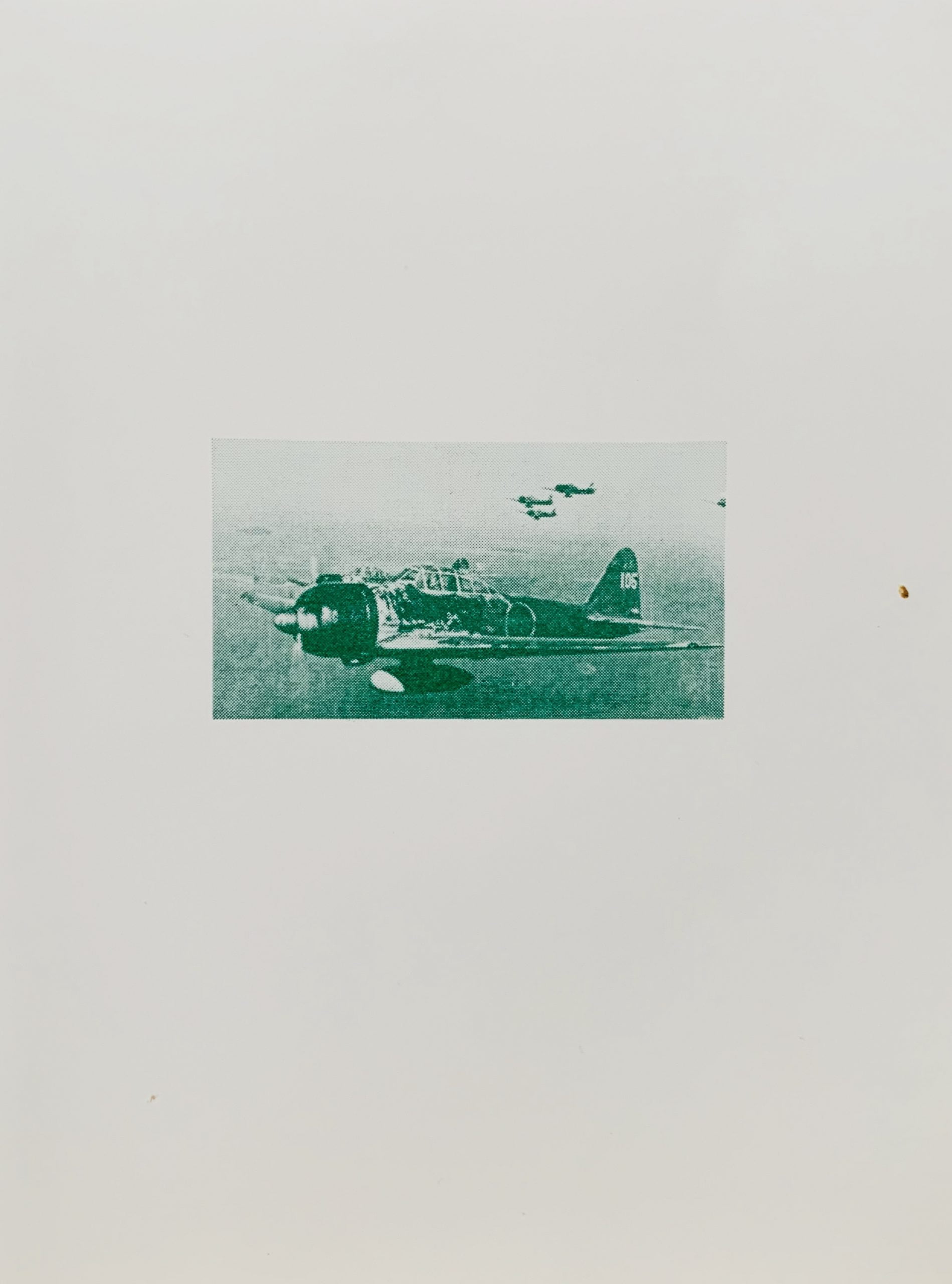 Where the eagles circle in
darkness, the sons of the
Alps cross from precipice
to precipice, fearlessly,
on the flimsiest rope
bridges.

In the Place de la Revolution
the man-made mountain
torrent clatters
and clatters.

The first half of the poem is from Hegel, the second Finlay refers to the increasing pile of heads (which did not really happen but is a popular historical meme) caused by the clattering guillotine.
This is one of a series of works which the Wild Hawthorn Press denoted as "Poems in folders". VG+. 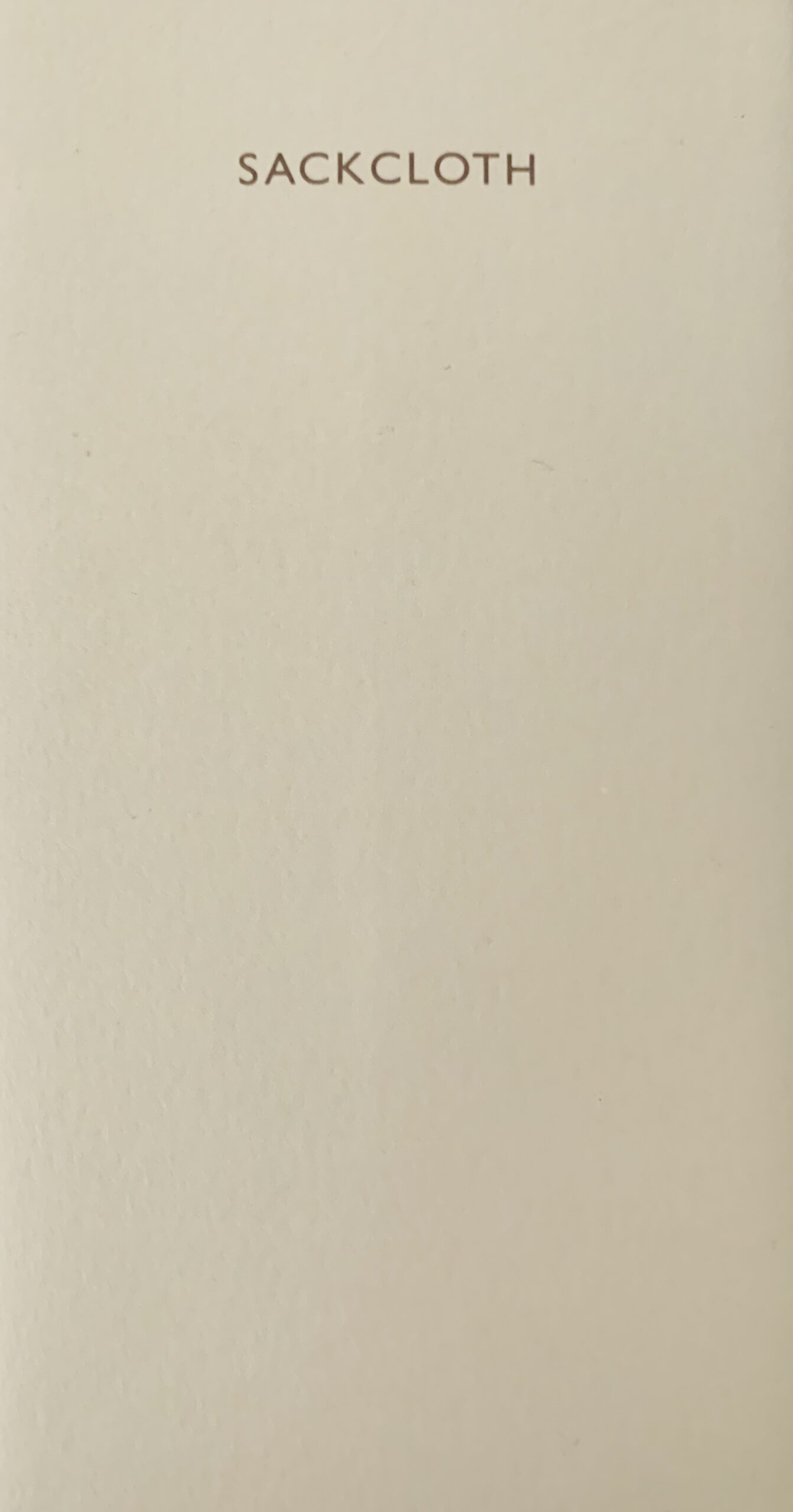 Little Sparta: Wild Hawthorn Press, n.d. (1991) 13.6 x 8.9cm, 4pp unprinted outer folder content of 4pp insert. Finlay's poem has only three words/lines after the title:<BR><BR> Sackcloth<BR><BR> Stars<BR><BR> woven<BR><BR> in<BR><BR> The lowly fabric (traditionally made out of goats hair) is given a greater status by Finlay's perception that the wove of the cloth looks like stars.  VG+ although slight corner crease to front of the plain light brown cover....

rill
in its throat.

bent
to the pool

Willow branches usually take a structure where they bend to the ground - a broken willow branch is doubling down on the phenomena.
This is one of a series of works which the Wild Hawthorn Press denoted as "Poems in folders". VG+.