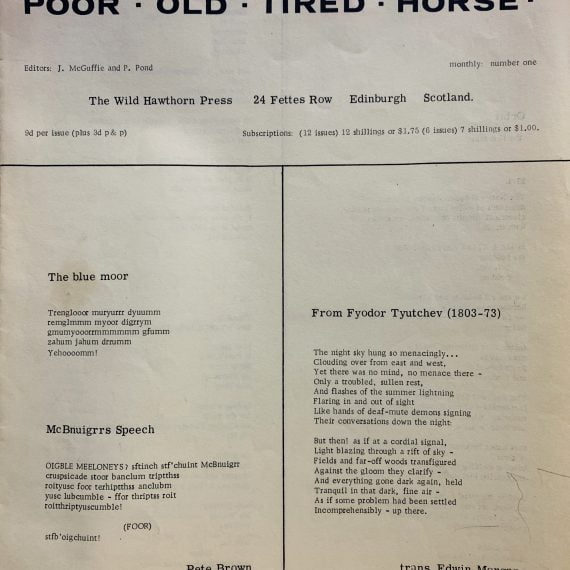 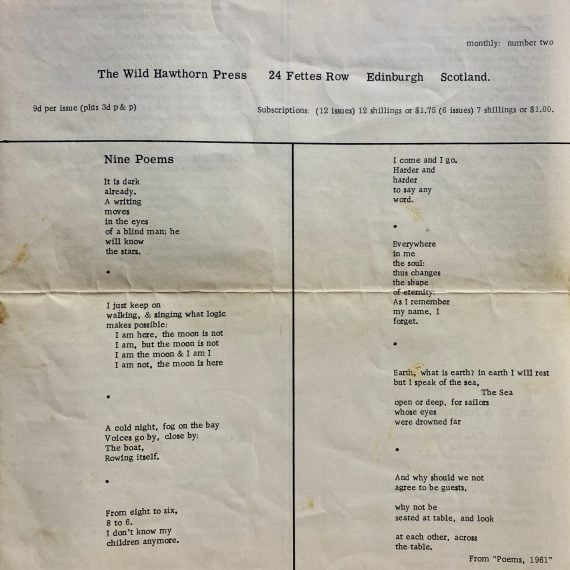 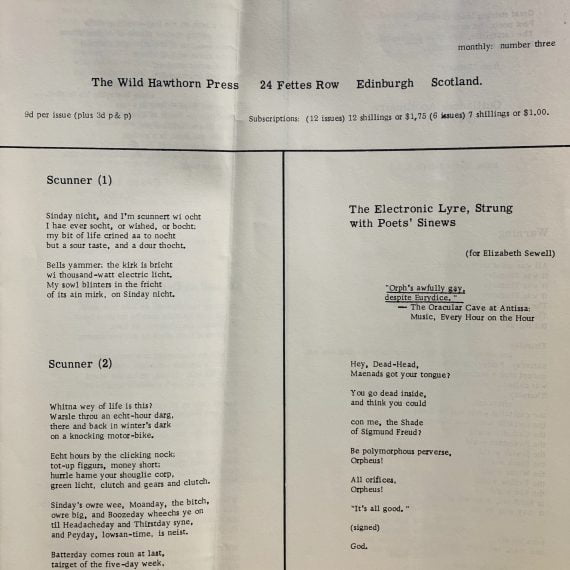 Batterday comes roun at last,
tairget of the five-day week,
jist in time to dip your wick;
whitna wey of life is this? 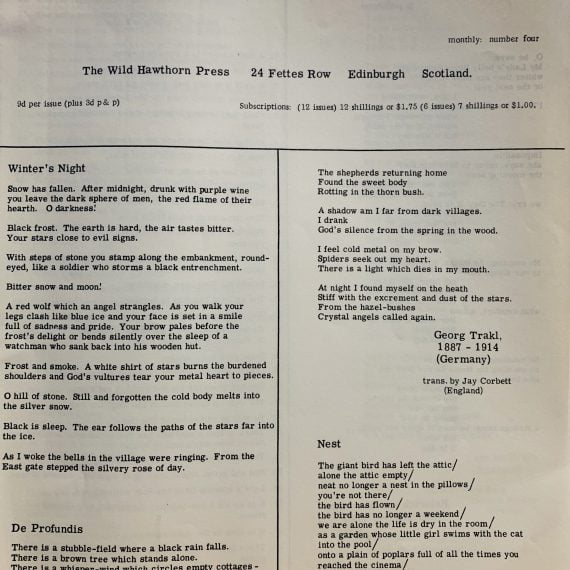 Edinburgh; Wild Hawthorne Press, 1962
30 x 21cm, 4pp. The fourth number of Finlay’s poetry publication with contributions by Georg Trakl (translated by Jay Corbett). Spike Hawkins. Heinrich von Morungen (translated by Anselm Hollo). J.F. Hendry. Helen B. Cruickshank. Tom McGrath. Bernard Kops. Alexander McNeish. Suzan Livingstone, and Lorine Niedecker. As usual bits of Scots find themselves near more modern American poems. This is an extremely hard to find early number of this international review - hardly any exist on the open market. This example is overall VG. Copies were sold for 9d each and were sometimes taken around Universities or sold at poetry / literature evenings as well as by subscription. 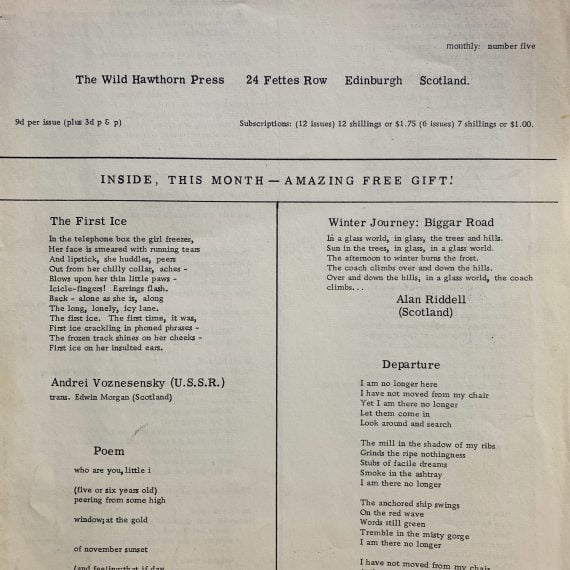 Edinburgh; Wild Hawthorne Press, 1962
30 x 21cm, 4pp. The fifth number of Finlay’s monthly poetry publication with contributions by Andrei Voznesensky (translated by Edwin Morgan), e.e. cummings, Alan Riddell, Vasko Popa (translated by J.F. Hendry), Pete Brown, Tao Chien (translated by Cid Corman), Armand Schwerner; Hans Arp (translated by Jerome Rothenberg); Pablo Neruda (translated by Jerome Rothenberg); Theodore Enslin; Pekka Lounela (translated by Anselm Hollo); Robert Garioch; and Marvin Malone. As usual bits of Scots find themselves near more modern American poems although this issue had more translated works than usual. This is an extremely hard to find early number of this international review - hardly any exist on the open market. This example is overall VG if slightly browned. Copies were sold for 9d each and were sometimes taken around Universities or sold at poetry / literature evenings as well as by subscription.
This number of the series had what Finlay called "AMAZING FREE GIFT" in it: an 37.5 cx 24.3cm, 1pp inserted sheet (folded) printing a poem by William McGonagall illustrated by by Alexander McNeish with a linocut (Finlay's earliest publications often used lino and wood cuts by choice). McGonagall is and was widely regarded as a terrible poet and there is a degree of mischief in publishing this work - but here in it's full over rhymed glory is the story of how they killed one of the ocean's most fabulous creatures but got their trousers wet.

’TWAS in the month of December, and in the year 1883,
That a monster whale came to Dundee,
Resolved for a few days to sport and play,
And devour the small fishes in the silvery Tay.
So the monster whale did sport and play
Among the innocent little fishes in the beautiful Tay,
Until he was seen by some men one day,
And they resolved to catch him without delay.
When it came to be known a whale was seen in the Tay,
Some men began to talk and to say,
We must try and catch this monster of a whale,
So come on, brave boys, and never say fail.
Then the people together in crowds did run,
Resolved to capture the whale and to have some fun!
So small boats were launched on the silvery Tay,
While the monster of the deep did sport and play.
Oh! it was a most fearful and beautiful sight,
To see it lashing the water with its tail all its might,
And making the water ascend like a shower of hail,
With one lash of its ugly and mighty tail.
Then the water did descend on the men in the boats,
Which wet their trousers and also their coats;
But it only made them the more determined to catch the whale,
But the whale shook at them his tail.
Then the whale began to puff and to blow,
While the men and the boats after him did go,
Armed well with harpoons for the fray,
Which they fired at him without dismay.
And they laughed and grinned just like wild baboons,
While they fired at him their sharp harpoons:
But when struck with,the harpoons he dived below,
Which filled his pursuers’ hearts with woe.
Because they guessed they had lost a prize,
Which caused the tears to well up in their eyes;
And in that their anticipations were only right,
Because he sped on to Stonehaven with all his might:
And was first seen by the crew of a Gourdon fishing boat
Which they thought was a big coble upturned afloat;
But when they drew near they saw it was a whale,
So they resolved to tow it ashore without fail.
So they got a rope from each boat tied round his tail,
And landed their burden at Stonehaven without fail;
And when the people saw it their voices they did raise,
Declaring that the brave fishermen deserved great praise.
And my opinion is that God sent the whale in time of need,
No matter what other people may think or what is their creed;
I know fishermen in general are often very poor,
And God in His goodness sent it drive poverty from their door.
So Mr John Wood has bought it for two hundred and twenty-six pound,
And has brought it to Dundee all safe and all sound;
Which measures 40 feet in length from the snout to the tail,
So I advise the people far and near to see it without fail.
Then hurrah! for the mighty monster whale,
Which has got 17 feet 4 inches from tip to tip of a tail!
Which can be seen for a sixpence or a shilling,
That is to say, if the people all are willing. 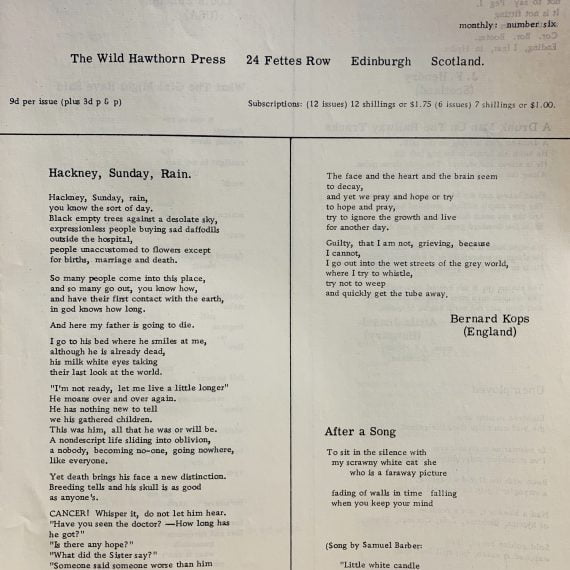 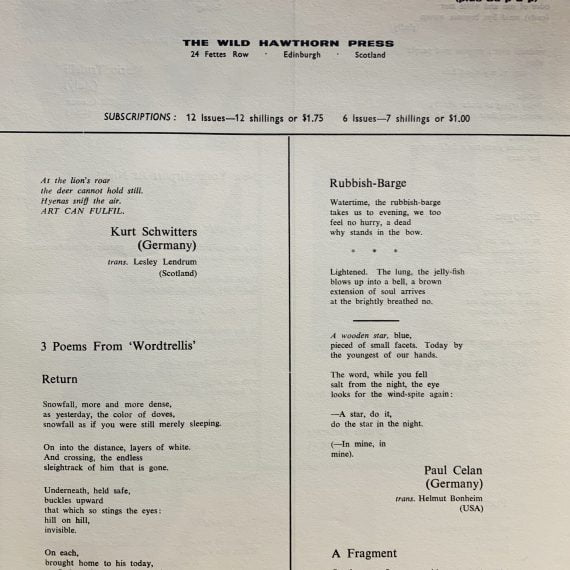 Edinburgh; Wild Hawthorne Press, 1963
30 x 21cm, 4pp + 1pp insert. The seventh number of Finlay’s poetry publication with contributions by Kurt Schwitters (translated by Lesley Lendrum), Paul Celan (translated by Helmut Bonheim), Robert Creeley, Piero Heliczer, Mario Trufelli (translated by Cid Corman); Andrei Voznesensky (translated by Edwin Morgan), Crombie Saunders, Paul Blackburn, Richard Huelsenbeck (translated by Jerome Rothenberg), Robert Simmons, Hamish McLaren, Bud Neill, Fernano Lemos, and Alexander McNeish. This is a very hard to find early number of this international review - hardly any exist on the open market. This example is VG. BR> The inserted sheet has three images in b/w by Bud Neill and Alexander McNeish as well as the work Drawing by Ferando Lemos which is clearly a visual poem and continues the introduction of such work to the POTH series. Thereafter this number almost all following issues were primarily concerned with such formats rather than traditional poetry structures. BR> 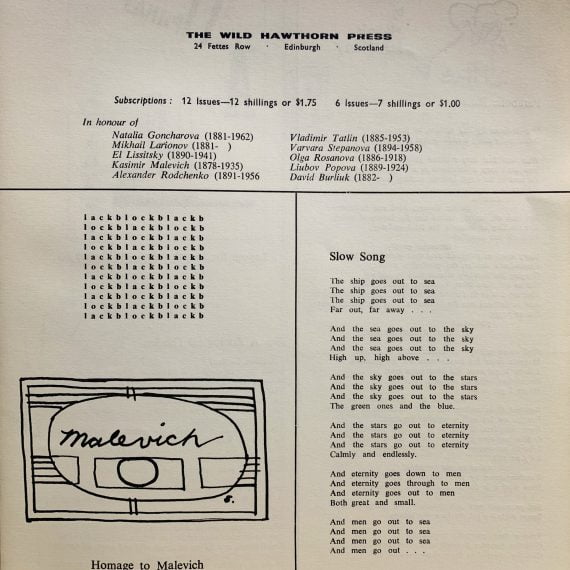 Edinburgh; Wild Hawthorne Press, 1963
30 x 21cm, 4pp. The eighth number of Finlay’s poetry publication with contributions by Ian Hamilton Finlay, Peter Stitt, Yury Pankratov (translated by Edwin Morgan), Andrei Voznesensky (translated by Edwin Morgan and Anselm Hollo), El Lissitsky, A. Khlebnikov (translated by J.F. Hendry and Edwin Morgan), Spike Hawkins, Jonathan Williams, Alexander Tvardovskii (translated by J.F. Hendry), and Mary Ellen Solt.
This was the first number of POTH to publish Finlay's own concrete poems - the work is Homage to Malevich - where a text block made up of combinations of the words LACK BLOCK and BLACK create a rectangle which is reflected in a drawing below (by Peter Stitt from Finlay's instructions). This work is published in other books by Finlay including Rapel. A significant section of the pages in this number are dedicated to Russian avant garde writers - mostly translated in part by Edwin Morgan and the number is dedicated to the memory of those writers including Malevich. 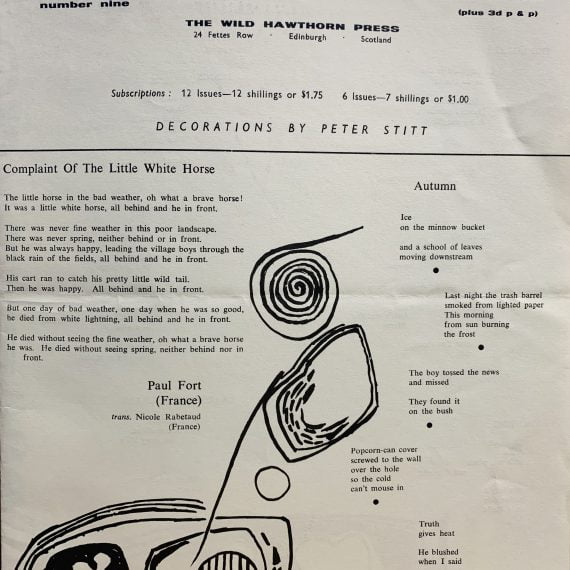 Edinburgh; Wild Hawthorne Press, 1963
30 x 21cm, 4pp. The ninth number of Finlay’s poetry publication with contributions by Paul Fort (translated by Nicole Rabetaud), Lorine Niedecker, Ronald Johnson, Rocco Scotellaro (translated by Cid Corman), Libby Houston; John Gray, and Paulo Marcos de Andrade (translated by Augusto de Campos). The inner double spread is based on Ronal Johnson's Sports and Divertissments - which Finlay later published as a stand alone book. The "decorations" herein (reproduced woodcuts) were by Peter Stitt. None of the poems in this issue might be clearly regarded as "concrete".
INSERTED
The "spring list" of books and other items available from the Wild Hawthorn Press. 19 x 29cm, 1pp. Folded. 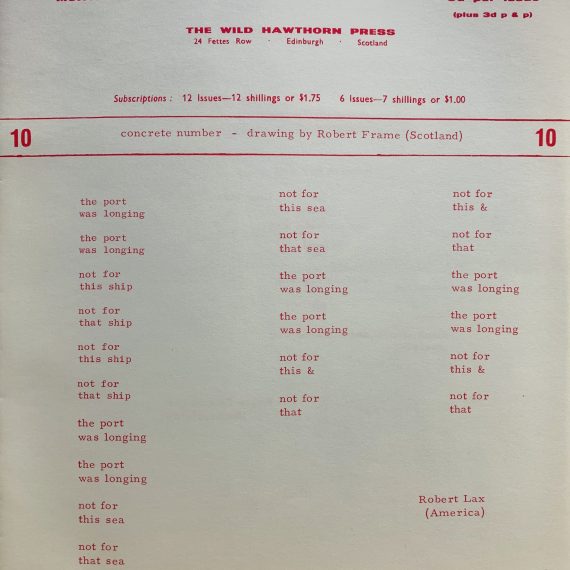 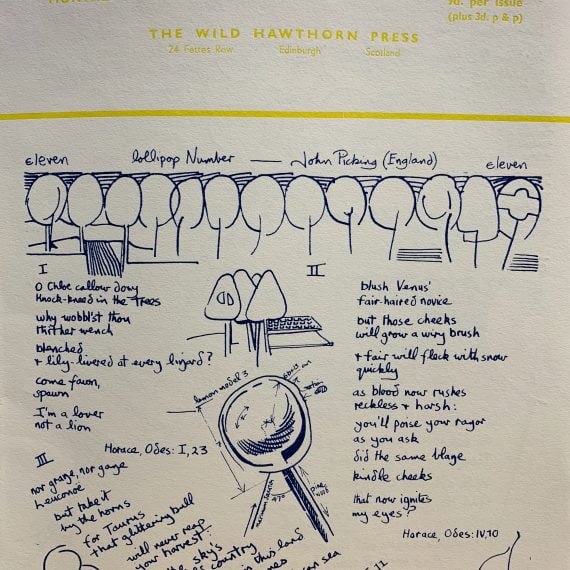 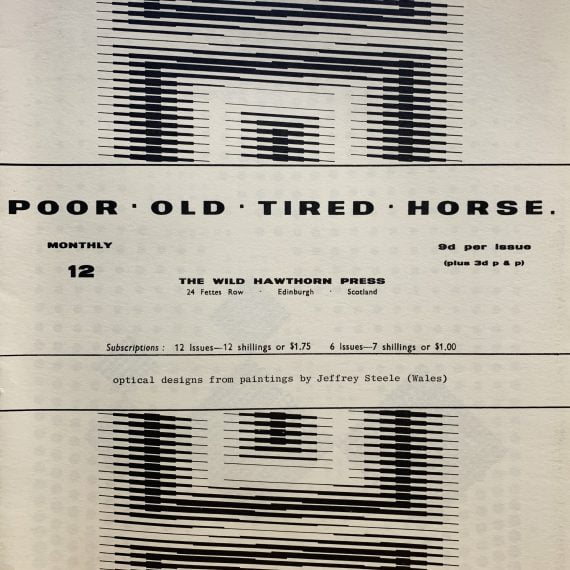